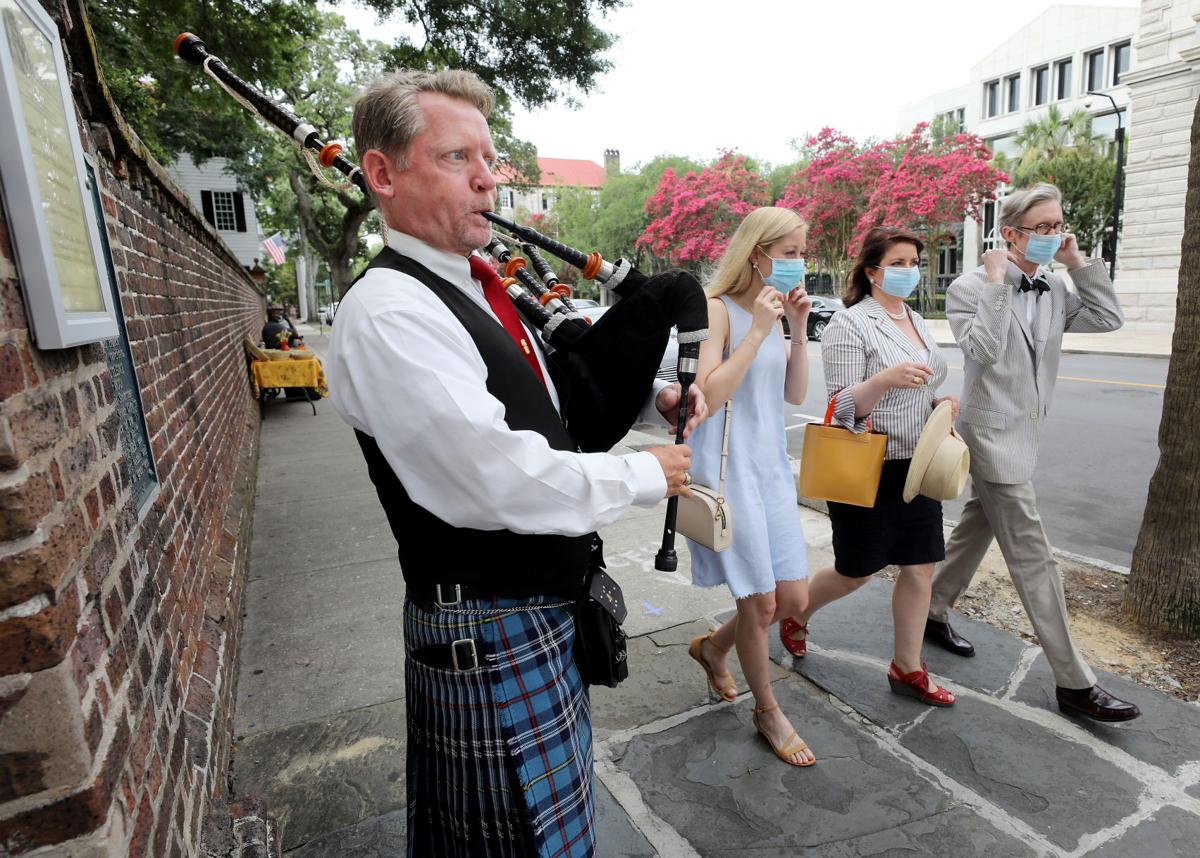 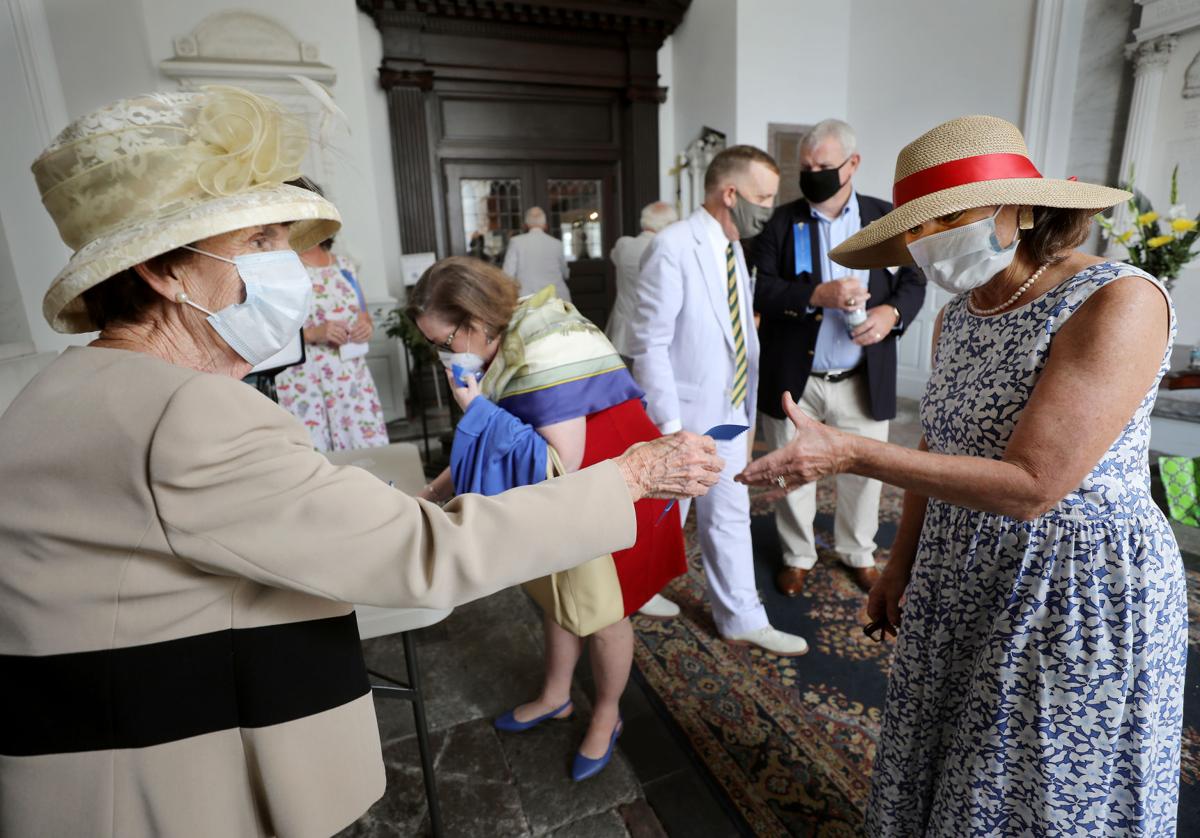 Anne T. Alford hands out a ribbon to Laura Wichmann Hipp as she arrives for a service at St. Michael’s Church commemorating Carolina Day on Saturday, June 27, 2020, in Charleston. Grace Beahm Alford/Staff 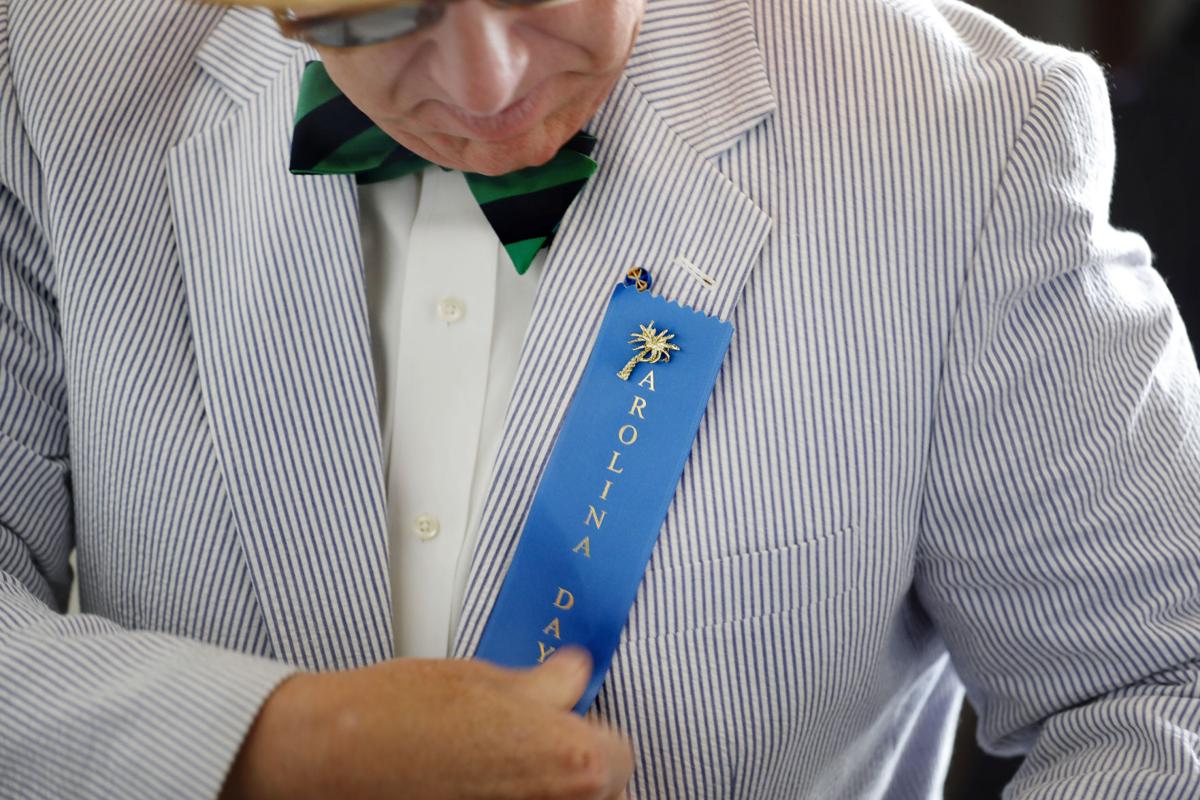 Attendees wear ribbons marking Carolina Day at a service at St. Michael’s Church on Saturday, June 27, 2020, in Charleston. Traditionally a parade is held but was canceled this year due to COVID-19. Grace Beahm Alford/Staff

Charlestonians have been celebrating Carolina Day, a commemoration of patriots' against-all-odds victory against British troops at the Battle of Sullivan's Island, for 243 years. The coronavirus pandemic will not break that tradition.

Usually, the day would be marked by a large procession through downtown Charleston, complete with waving flags and Revolutionary War reenactors.

But, rather than hundreds gathering for the customary parade to White Point Garden, dozens convened at St. Michael's Church Saturday morning for the annual prayer service, which was the only official event of the day on the peninsula.

"We were determined to not miss it this year," said Charles Stephens, the chairman of the Palmetto Society, the organization that has, since 1777, commemorated Carolina Day. "As Charlestonians, it's part of who we are and what we do."

Typically, Stephens said, planning for the parade starts in early March. So, when their organization convened the first week of that month to get plans in motion for this year's event, they "had no idea what was coming," he said.

Editorial: This Carolina Day, let's celebrate a historical symbol that still unites us

Just a few weeks later, businesses started to close en masse, and the city issued a stay-at-home order to help slow the virus's spread. Now, in late  June, most businesses have reopened but health officials still advise against large gatherings, especially now that cases in the Lowcountry and across the state are rising.

When it became clear a parade wasn't going to square with Charleston's coronavirus-related rules, they decided to focus on making the service at St. Michael's safe, Stephens said.

Since the actual anniversary of the battle, which occurred on June 28, 1776, falls on a Sunday this year, the service was held one day early. Charleston residents have been encouraged to fly their state flags on both days.

A bagpiper stationed outside the church's entrance Saturday morning played as people arrived and donned their "Carolina Day 2020" ribbons.

Seersucker suits, light blue dresses and Sunday best hats were matched with face masks, which were required for all attendees at the service. A bottle of hand sanitizer was stationed next to a sign-in sheet, and a basket was set out for donations in lieu of collecting money during the service.

An usher wearing gloves led people individually or in pairs to their seats, leaving every other pew empty.

Mostly unmasked passersby stopped to listen to the bagpipes or peer into the church's windows before walking down to the City Market area, which was already abuzz with tourists just before the 10 a.m. service.

Since members of the Society and other regular attendees have heard the story of the battle year after year, they're always trying to think of a new angle for retelling it, Stephens explained.

This year, Dr. C.L. “Chip” Bragg, a retired anesthesiologist from Georgia who has authored several books on American history, told the story of the battle as it would have been experienced by civilians on the peninsula.

Bragg asked the people sitting in the pews to put aside their "outcome bias" — the skewed perspective that comes from knowing who won the battle — to understand just why, at that time, Charlestonians would have thought that defending the fort on Sullivan's Island was "a bad idea."

When British forces attacked the fort, then known as Fort Sullivan and now as Fort Moultrie, it was far from complete. And while its materials, a mix of sand and palmetto logs, proved to be surprisingly resistant to cannon fire, no one knew that before the battle began.

Given the odds against the outnumbered Carolinians defending the fort and the importance of the decisive victory to eventually winning the Revolutionary War, Bragg said that the battle was, in his view, "the most dramatic event in American history."

Despite the obvious differences this year, which could be clearly seen from the spaced-out seating, face coverings and Plexiglas-shielded pulpit, the mood of the service was still celebratory.

Singing behind masks was allowed, to patriotic hymns like "My Country 'Tis of Thee" and "America the Beautiful."

At the end of the service, everyone was asked to stay in their pews until an usher came by and told them they could go, to maintain social distancing.

A woman approached the bagpiper who had resumed playing as the service emptied out and asked if he was going to play "Scotland the Brave."

"That's up next," he said, and started the tune.

As people milled around outside the church, still wearing their masks and chatting with friends, she started to dance.