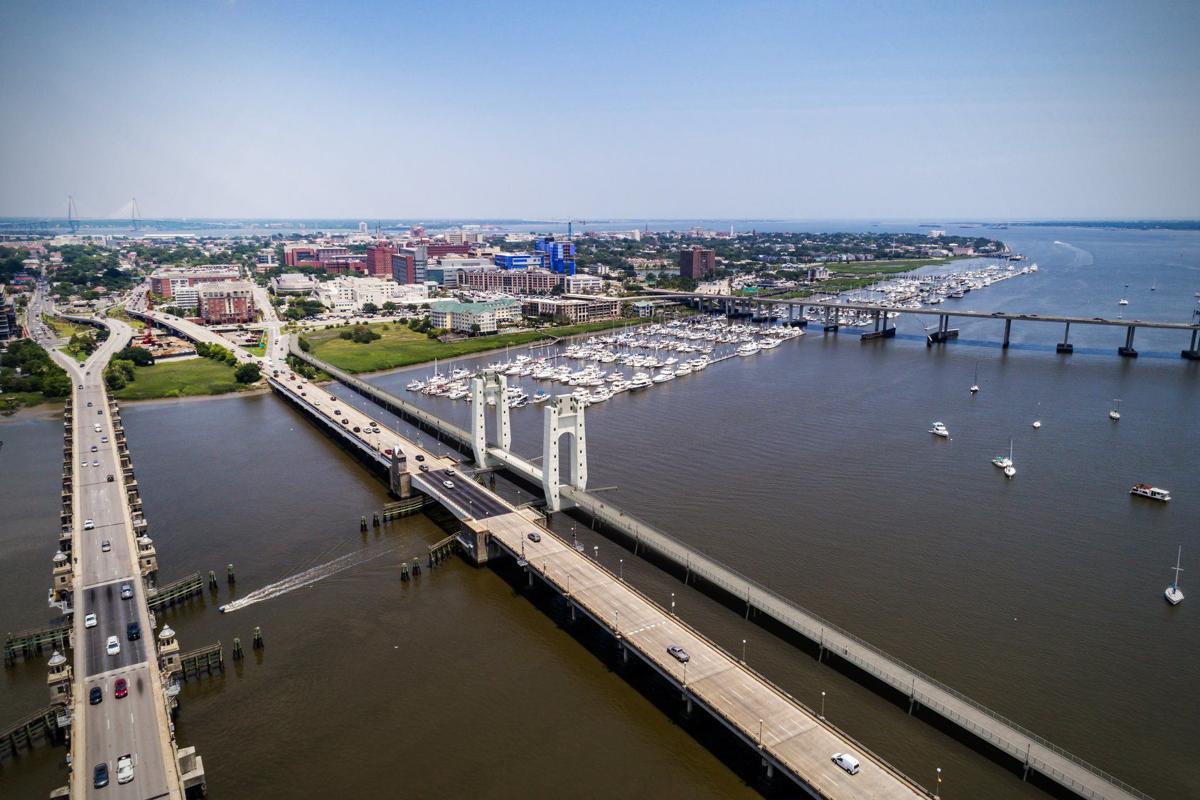 The proposed Ashley River bike-ped bridge, right, with the James Island Connector in the background. Provided 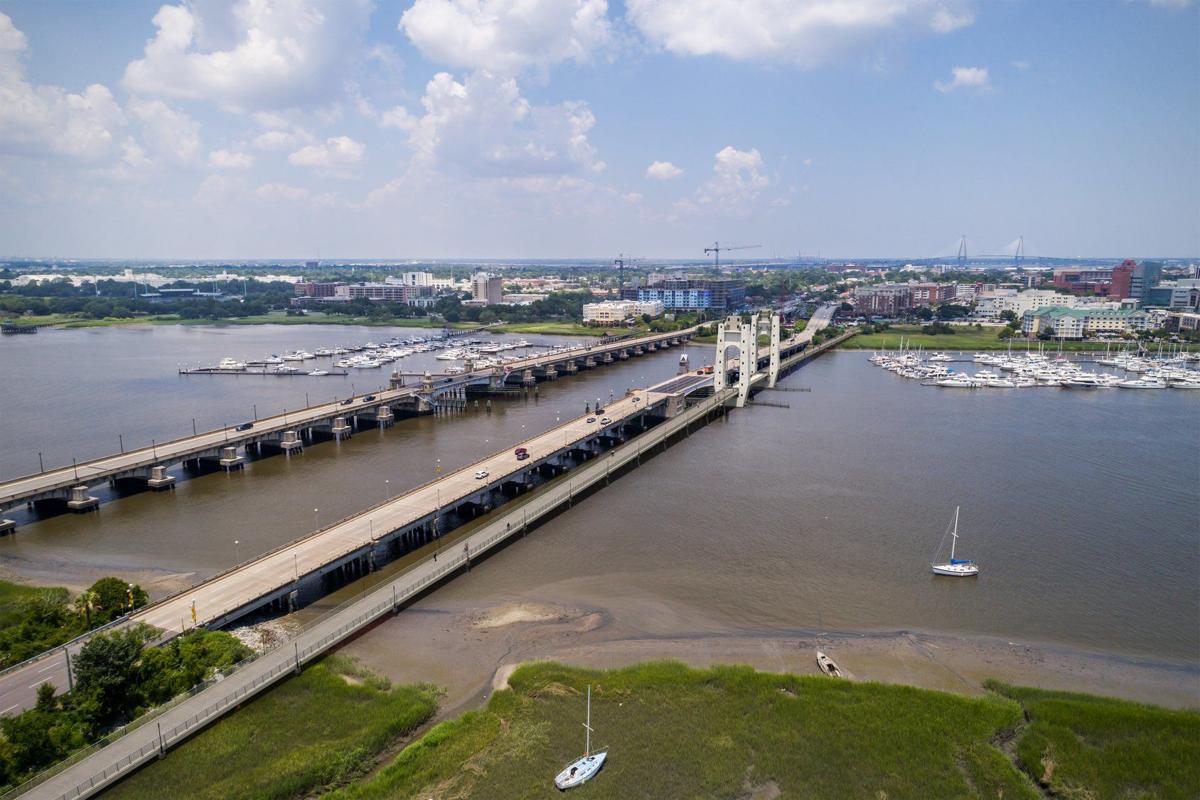 This rendering shows how close a proposed Ashley River bike-ped bridge (right) would be built to the existing U.S. Highway 17 bridges. Provided 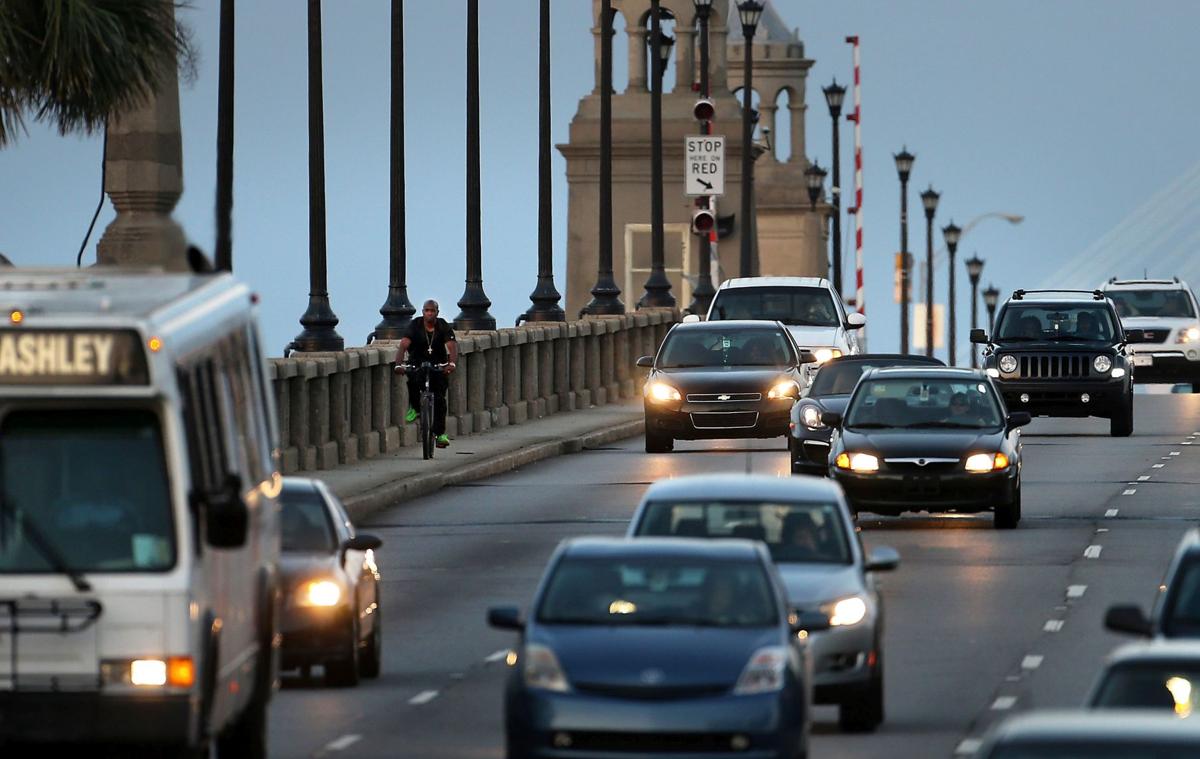 James Island resident Edward Palmer uses the sidewalk on the southbound bridge to get to and from work downtown and keeps up with news about the possibility of a dedicated bike lane on the northbound Ashley River Bridge. Wade Spees/Staff Monday, August 24, 2015

Bicyclists and pedestrians soon will have their own bridge across the Ashley River.

The U.S. Department of Transportation has awarded Charleston an $18.1 million BUILD grant for a stand-alone bicycle and pedestrian bridge that would be built just south of the twin U.S. Highway 17 drawbridges.

The federal money promises to fulfill more than a decade-long struggle to create a safe route across the Ashley River comparable to the 12-foot-wide Wonders Way bike-ped path on the Arthur Ravenel Jr. Bridge across the Cooper River.

The Ravenel Bridge opened in 2005, but efforts to bridge the Ashley River have suffered several setbacks along the way.

Early plans to cantelever a new path off the existing T. Allen Legare Bridge had to be scuttled because it would have added too much weigh for its drawbridge to function. An effort to convert one of that bridge's four northbound lanes also died after concerns that it would delay vehicle traffic during the morning rush hour.

This also was the city's third attempt to win the BUILD (Better Utilizing Investments to Leverage Development) grant, the crucial funding piece for the project, whose total cost is estimated at $22 million. Most of the rest of the cost is expected to come from Charleston County's half-cent sales tax.

City leaders and the nonprofit group Charleston Moves lined up support for the grant from more than 230 supporters, including businesses, neighborhoods and elected officials. A top city staffer traveled to Washington, D.C., to seek support from U.S. Sen. Lindsey Graham and other members of South Carolina's congressional delegation.

"A safe, connected and equitable crossing for all modes between West Ashley and the peninsula, a serious issue that the community has agonized over and fought to remedy for nearly a century, is finally funded," she said.

She thanked U.S. Sens. Graham and Tim Scott, both Republicans, and U.S. Reps. Jim Clyburn and Joe Cunningham, both Democrats, as well as local leaders for pushing for the project.

"So many of us have invested blood, sweat and tears to get this crossing and its connections to downtown and the West Ashley Greenway and Bikeway," Zimmerman said. "We are humbled and grateful to be part of the Ashley River Bridge team."

Graham broke the news Wednesday afternoon. He had written U.S. Transportation Secretary Elaine Chao in support of the grant, and Graham thanked Chao for the grant. "This project will improve the quality of life and safety of all those who live in and around one of the greatest cities in the nation: Charleston, South Carolina," Graham said.

Cunningham, of Charleston, also wrote Chao to support the grant and called the news "a massive victory for our community and everyone who has advocated for construction of the Ashley River Pedestrian Bridge over the years."

"With this BUILD grant, Lowcountry residents will finally be able to safely commute between West Ashley and downtown Charleston without relying on motorized vehicles," he said, noting the project will promote environmental sustainability while relieving traffic congestion.

Charleston Mayor John Tecklenburg called the project "a critical addition," adding, "When built, this crossing will help complete a 12-mile stretch of dedicated bicycle and pedestrian pathway that will strengthen the connectivity of our neighborhoods and job centers, support our ongoing West Ashley Revitalization and improve the quality of life for our citizens."

Most pedestrians and cyclists, including Zimmerman, have had to use the narrow, raised sidewalk along the older Memorial Bridget to bike between downtown and West Ashley. But it's a harrowing trip, with cars and trucks whizzing close by at speeds of more than 40-50 mph.

It's unclear how quickly it can be built. While the federal grant helps with the financing obstacle, the project still needs to be designed, permitted and constructed, which is expected to take at least a few years. City officials are expected to hold a press conference Thursday morning to outline the next steps.

The bridge is but a first step in the area's larger goal of establishing safe bike and pedestrian routes across other points along the Ashley River, such as the North Bridge and James Island connector, as well as across the Wappoo Cut.

Don Sparks, a co-founder of Charleston Moves and former vice president of the League of American Bicyclists, said the city should be congratulated on getting the grant.

"Hopefully, with crossings over both rivers Charleston can now move forward with the bicycle infrastructure than can transform our city," he said.

The bridge also will help add a missing link for the East Coast Greenway, a 3,000-mile bike and pedestrian route being developed along the coast from Maine to Florida.

Dennis Markatos-Soriano, the Greenway's executive director, said the bridge will make one of the route's most dangerous bridge crossings into a highlight along the way and should attract visitors from across the country.

“Today is a transformative day for the city of Charleston," he said Wednesday. "We have seen how this kind of federal support can transform a city as it has with the Schuylkill River Trail in Philadelphia, and we are thrilled for the people of South Carolina to see funding awarded."