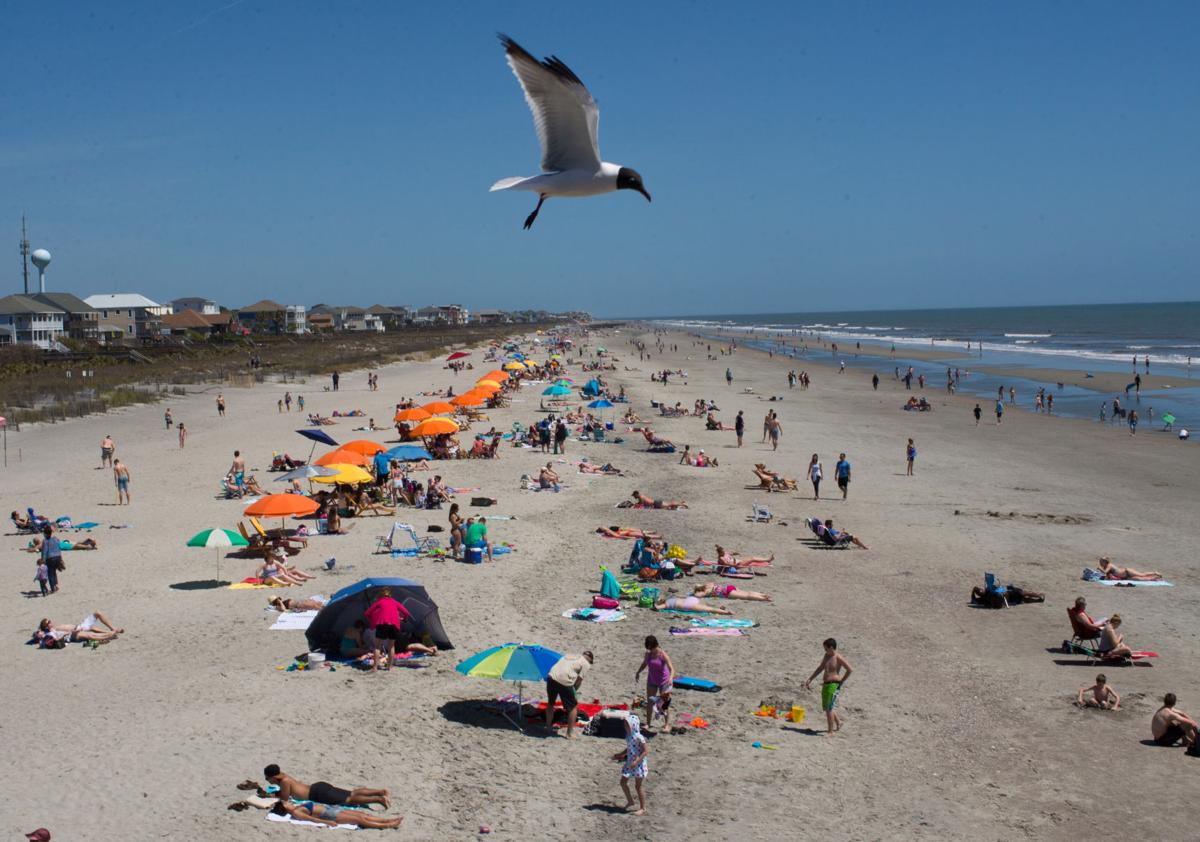 People flock to Folly Beach at the beginning of beach season. 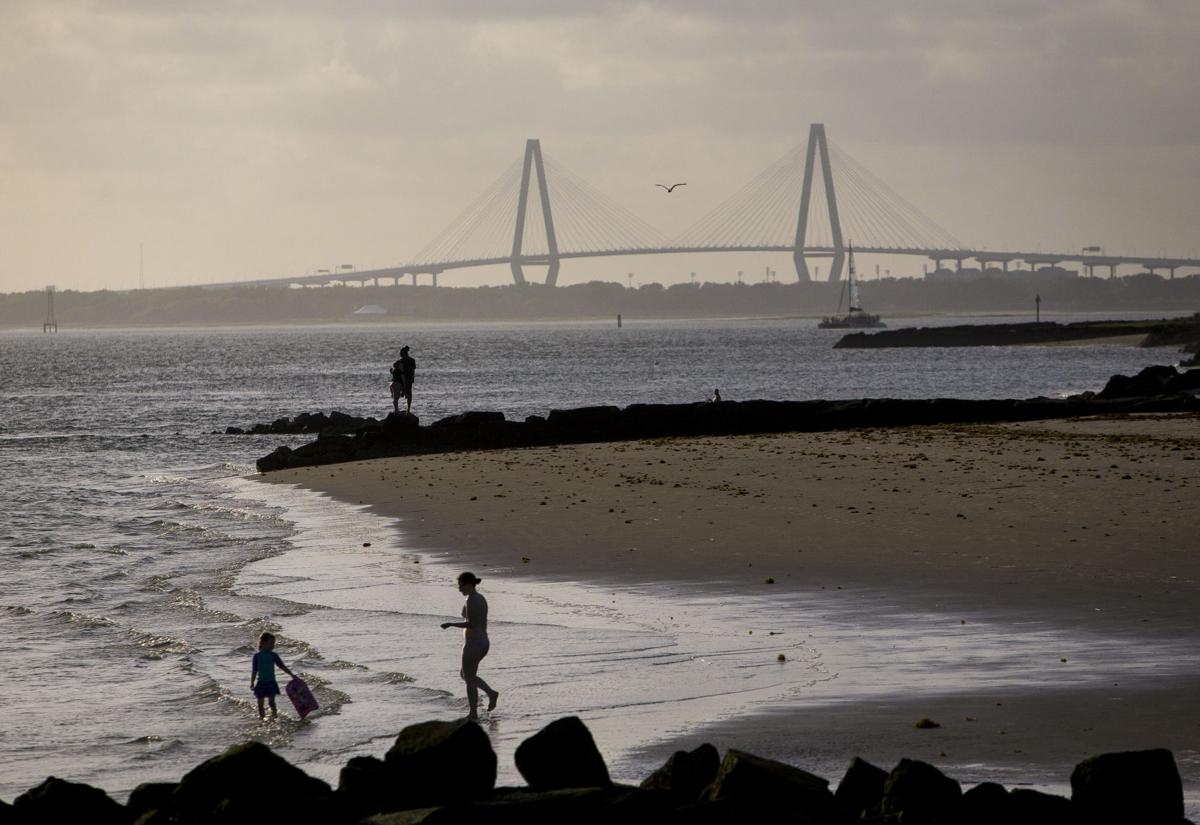 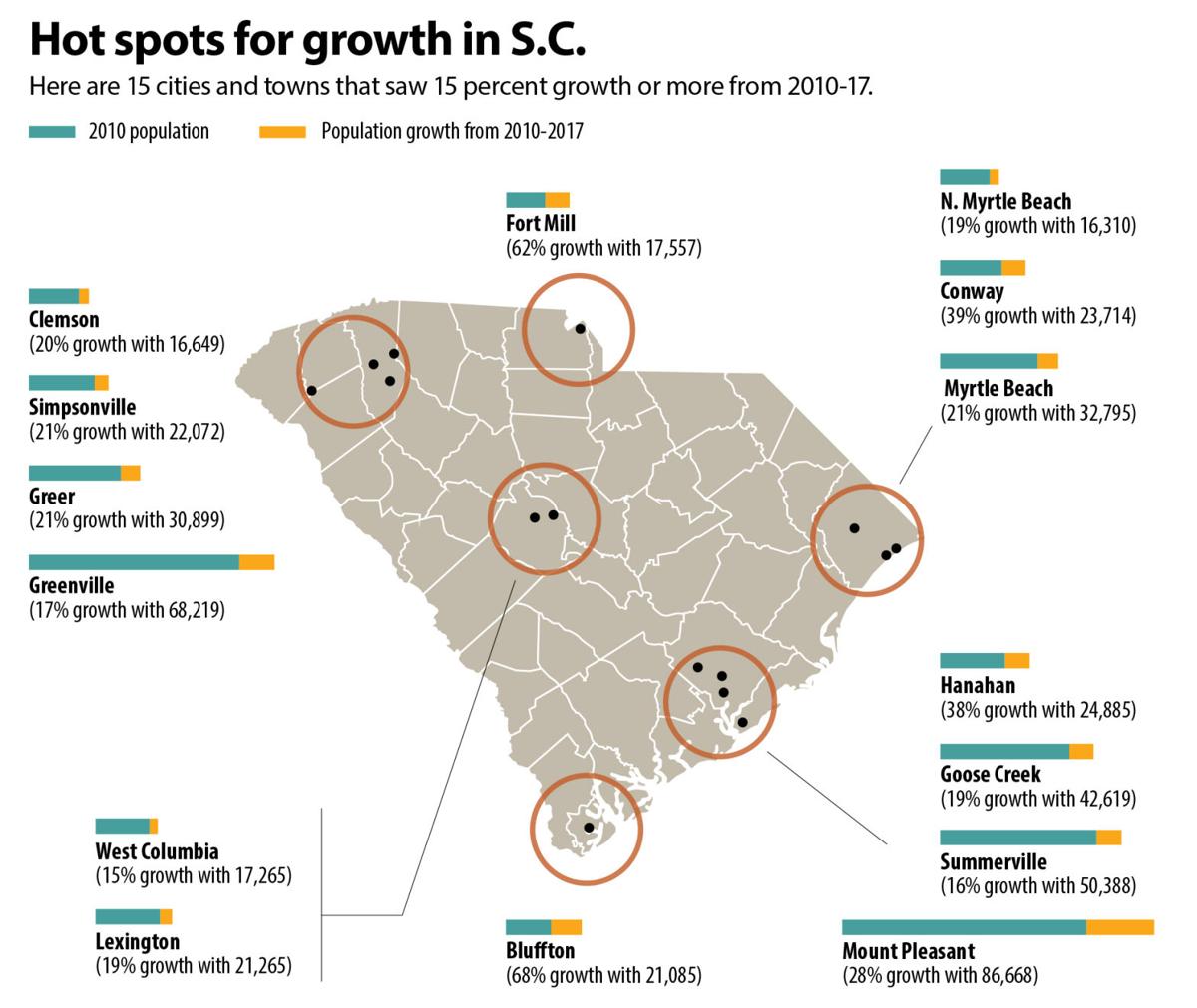 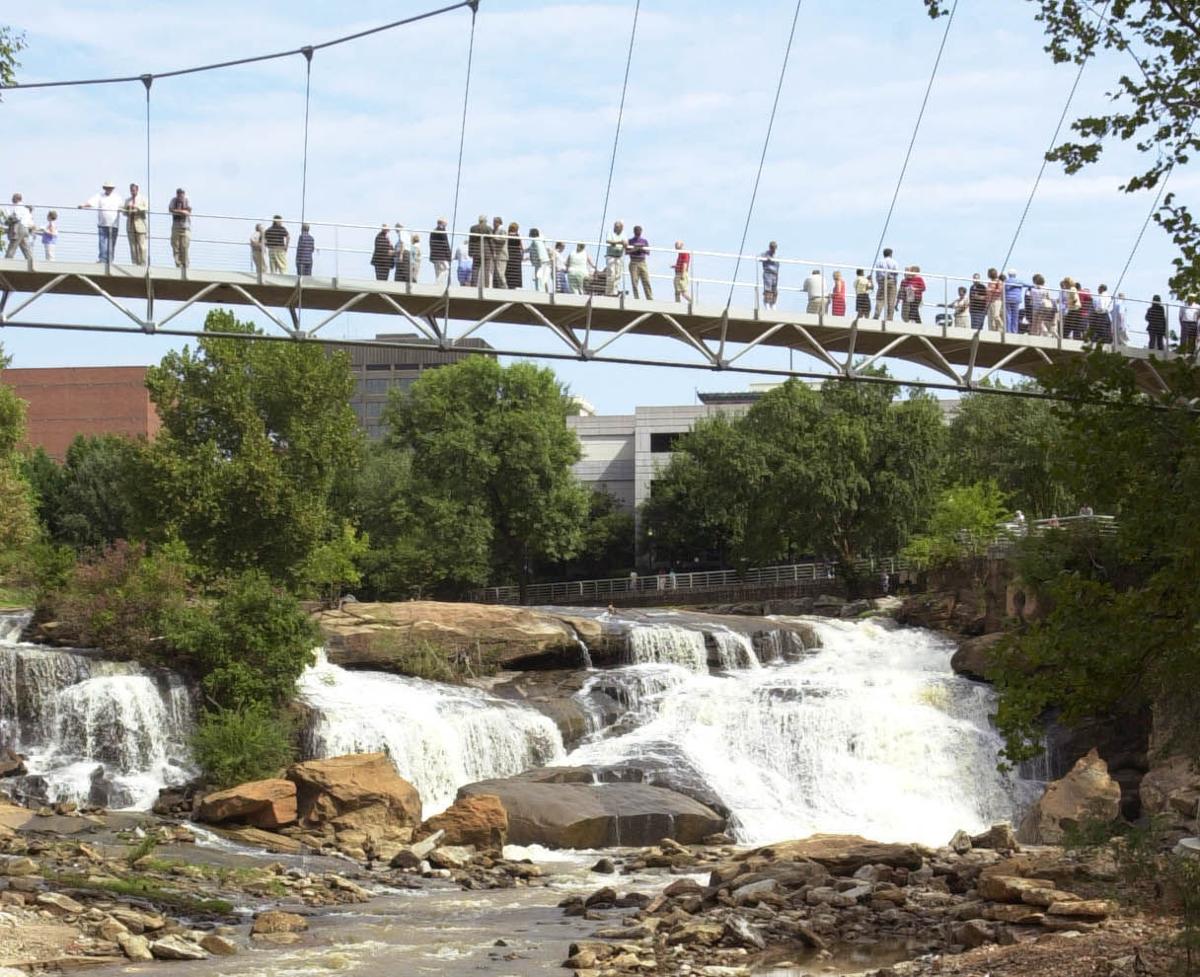 Visitors enjoy the view of the Reedy River from the Liberty Bridge at Falls Park in downtown Greenville. Greenville's population has been rising rapidly. File/Associated Press 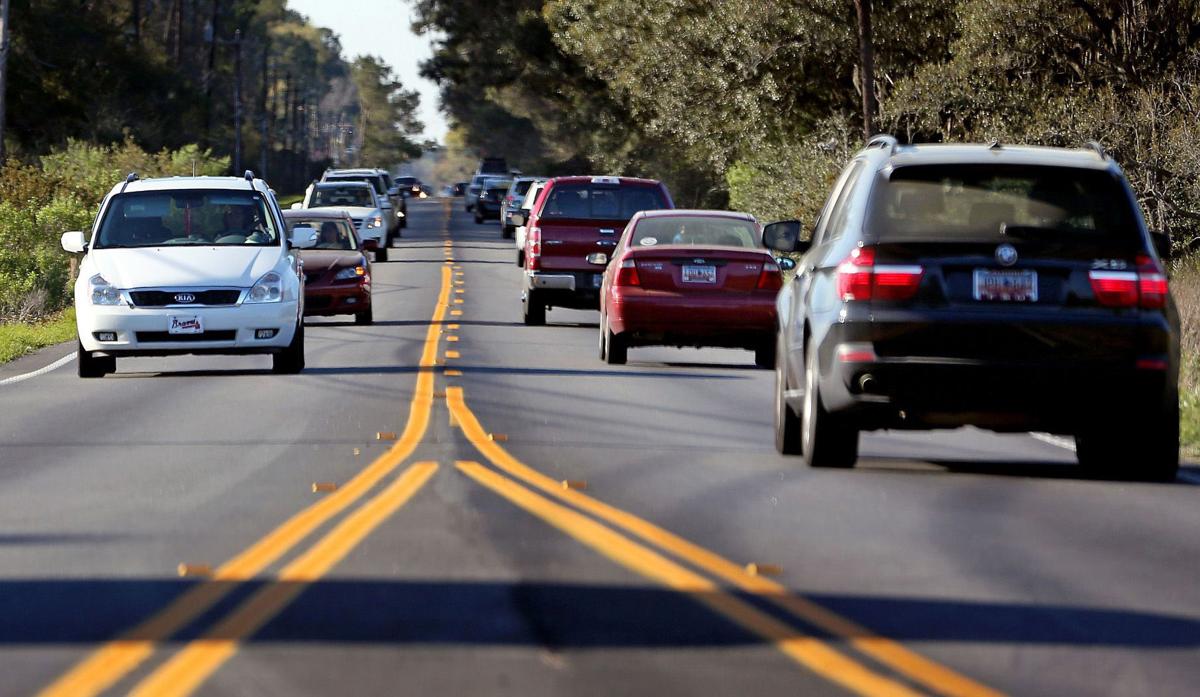 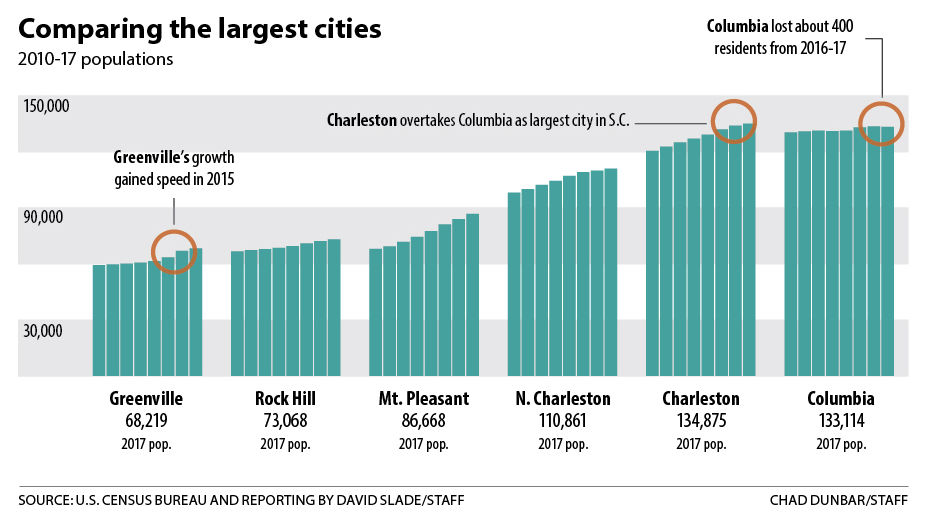 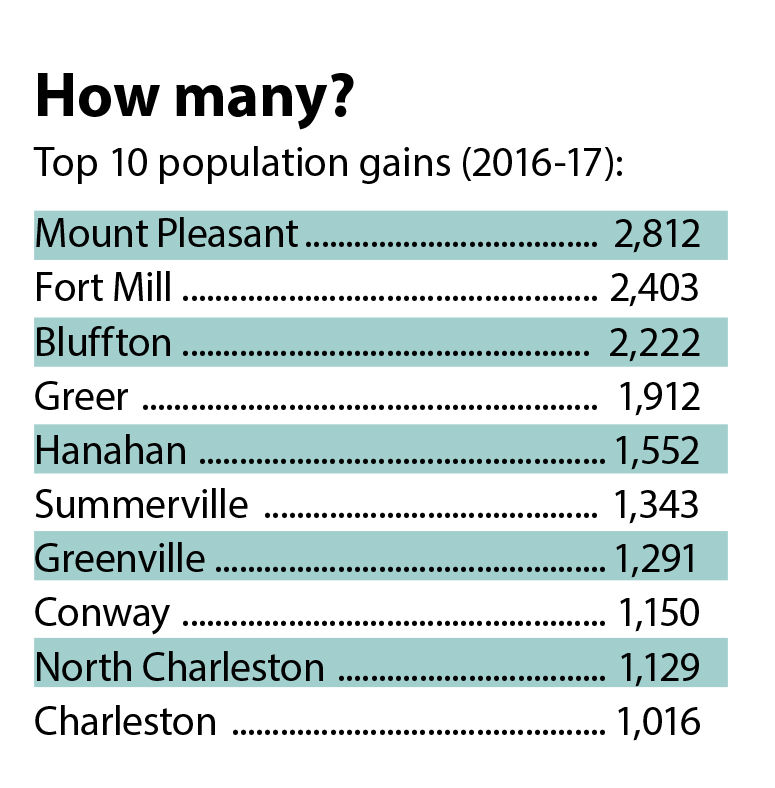 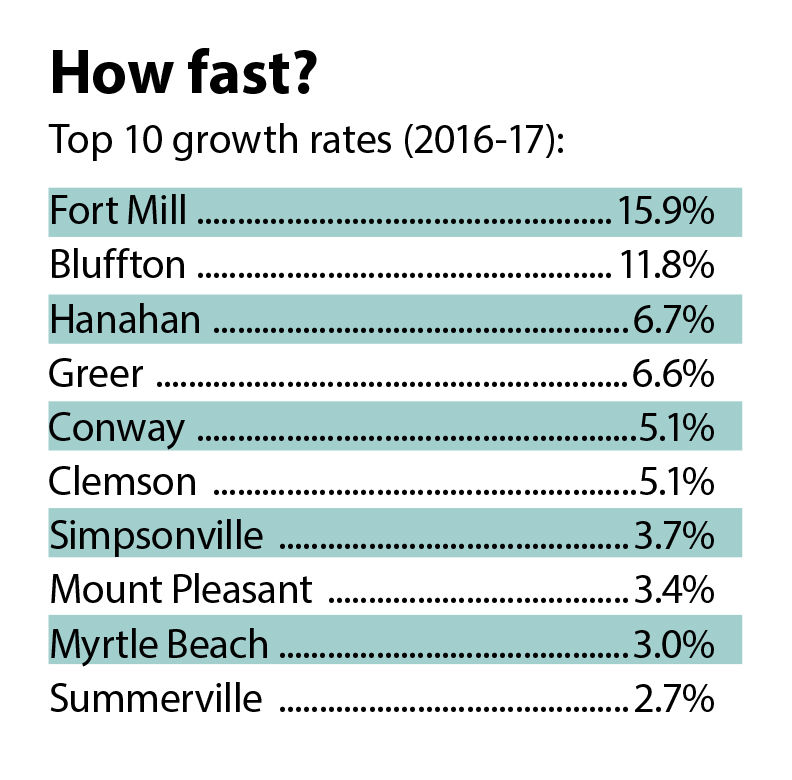 People flock to Folly Beach at the beginning of beach season.

Visitors enjoy the view of the Reedy River from the Liberty Bridge at Falls Park in downtown Greenville. Greenville's population has been rising rapidly. File/Associated Press

The surge in population cemented Charleston's recent title as the state's largest city and gave Mount Pleasant and Greenville some of the most rapid large-city growth on the East Coast.

Newcomers flocked to communities near the ocean, the mountains and thriving urban job centers.

Many smaller towns and cities in the Upstate and the Lowcountry saw the sort of explosive population growth that can strain roads and schools. Fort Mill, which has become part of the Charlotte suburbs, saw the town's population grow nearly 16 percent in a single year, the Census Bureau said Thursday.

A district study said it would take an $18,158-per-house development impact fee for the district to accommodate such growth, and York County is considering raising the current, $2,500 fee.

The town of Bluffton, near Hilton Head, also saw double-digit population growth for the year ending July 1, 2017. Since the last official census was conducted in 2010, the number of residents in that town has soared by an eye-popping 68 percent.

The only town or city that gained more residents than Fort Mill and Bluffton was Mount Pleasant, which is no stranger to the fastest-growing cities list.

Kathy Aven moved from Pennsylvania to the Park West development in Mount Pleasant last year, attracted by the area's beauty, the nearby beaches and a desire to be closer to her adult children who had also moved to the South. She considered the Florida coast but found it over-developed and now worries the same could happen in South Carolina.

"I just wonder how much worse the traffic will get," she said. “The natural beauty here, I would hate to see that spoiled."

Areas that have seen the most rapid growth in recent years have been feeling pressure — traffic jams, crowded schools, strained services — and some have responded with new limits on construction and soaring fees aimed at paying for development impacts. Mount Pleasant is phasing in a huge increase in development fees that began last year.

“Even with the apartment moratorium and a number of other things we’ve done to try and slow the train, the town is growing because so much of it was backlogged," said Councilman Joe Bustos, who has advocated an annual limit on building permits. “Because so much was in the pipeline we haven’t been able to slow it too much."

A pilot and flight instructor, Bustos regularly gets a bird's-eye view of the growth in Mount Pleasant and other Charleston-area towns and cities.

“When I fly around I can see Goose Creek and Hanahan and Moncks Corner just exploding," he said. “You can see all the growth coming out of the ground."

In South Carolina, the largest cities did not add the most new residents last year, and the second-largest-city, Columbia, lost population. Smaller towns and cities — Fort Mill, Bluffton, Greer, Hanahan and Summerville — all gained more population than Charleston, Columbia, North Charleston or Greenville.

A point of pride

"It's a challenge," said Greer City Administrator Ed Driggers. "I wouldn't classify it as a burden."

"Our roads still have capacity," he added.

Some see rapid growth as proof of their community's desirability.

“We were named the safest city in the state in 2016 and remain in the top 10 annually,” said Hanahan City Administrator Johnny Cribb. “We have great schools and community parks and recreation."

Others have come to view rapid population gains as an unsustainable burden.

Mount Pleasant, the bedroom suburb that is the state's fourth-largest municipality, saw its population grow an estimated 3.4 percent in 2017, gaining more residents than the state's three largest cities combined. It was the 29th fastest-growing city in the U.S., with at least 50,000 residents.

“At a 3.5 percent average growth rate, our calls for public service have gone from 5,000 per year to 17,000 per year" over the past four years, said Mount Pleasant Mayor Will Haynie. “Our calls to the police and fire department are up 50 percent in four years."

"That is unsustainable unless we are going to drastically increase taxes," he said. "We’re not designed to handle that kind of increase."

Nationally, U.S. residents have been relocating to the South and West for years. In 2017, Texas claimed half of the top-10 large cities with the highest annual population gains. No city on the East Coast was on that list.

Once-sleepy Summerville, the "Flower Town in the Pines," was the nation's 59th-fastest-growing large city last year. Greenville was No. 106, following an upsurge in population that took hold in 2014.

"It's been going on for years, just a little bit at a time, and you don't notice it," said Summerville Mayor Wiley Johnson. "Kind of like a frog in a pot of water."

In the famous frog metaphor, the frog doesn't notice the water in the pot is being heated until it gets so hot it kills the frog.

"We are probably the single most attractive town around Charleston," said Johnson, with tree-lined streets and an historic downtown. "Those are things we have to keep and maintain."

Too much population growth, too fast, is increasingly viewed as a bad thing. But a falling population poses its own challenges, including empty storefronts and a shrinking tax base.

Columbia, Sumter, Florence, Orangeburg, Marion and Mullins were among inland towns and cities with fewer residents in mid-2017 than they had a year earlier.

Even in fast-growing South Carolina there are towns and cities in decline. Those that bookend South Carolina — along the coast at one end, in suburban Charlotte and along the Interstate 85 corridor on the other — saw another year of rapid population growth but most of the rest of the state just watched.

Brenda Rindge and Jesse Naranjo contributed to this report.

Understand SC: Why is SC seeing rapid growth and how is it changing the state?

Ep. 5: South Carolina's population has been growing steadily for years. In this episode, we look at why and how the state has changed.