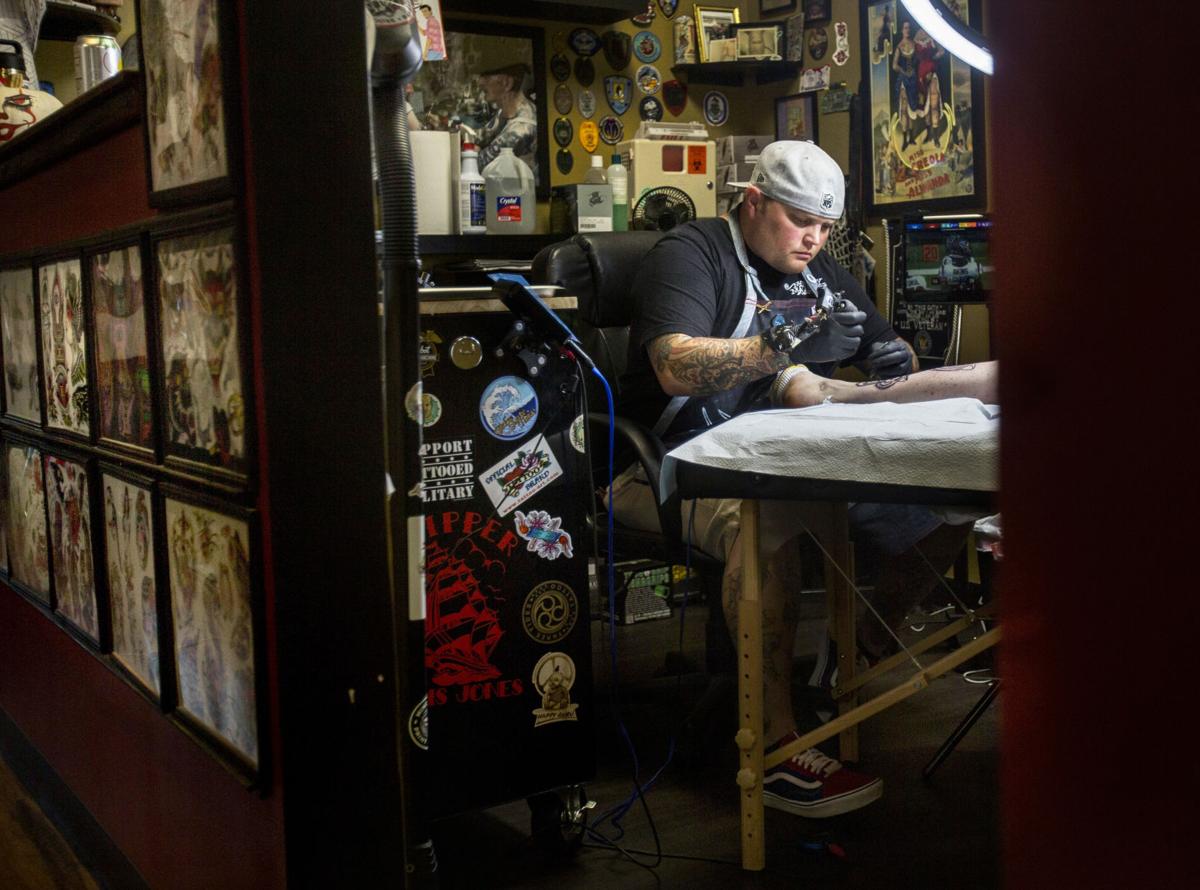 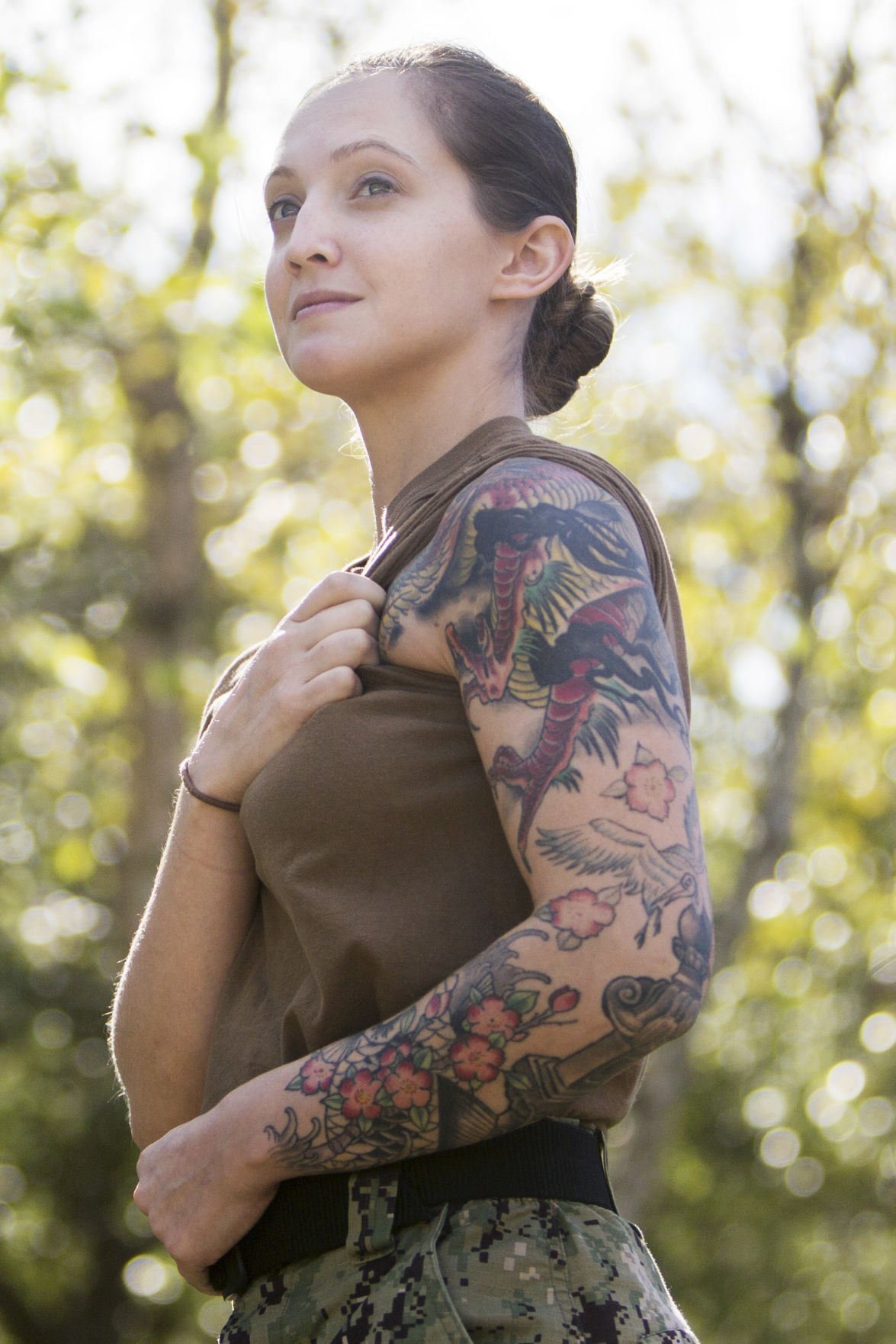 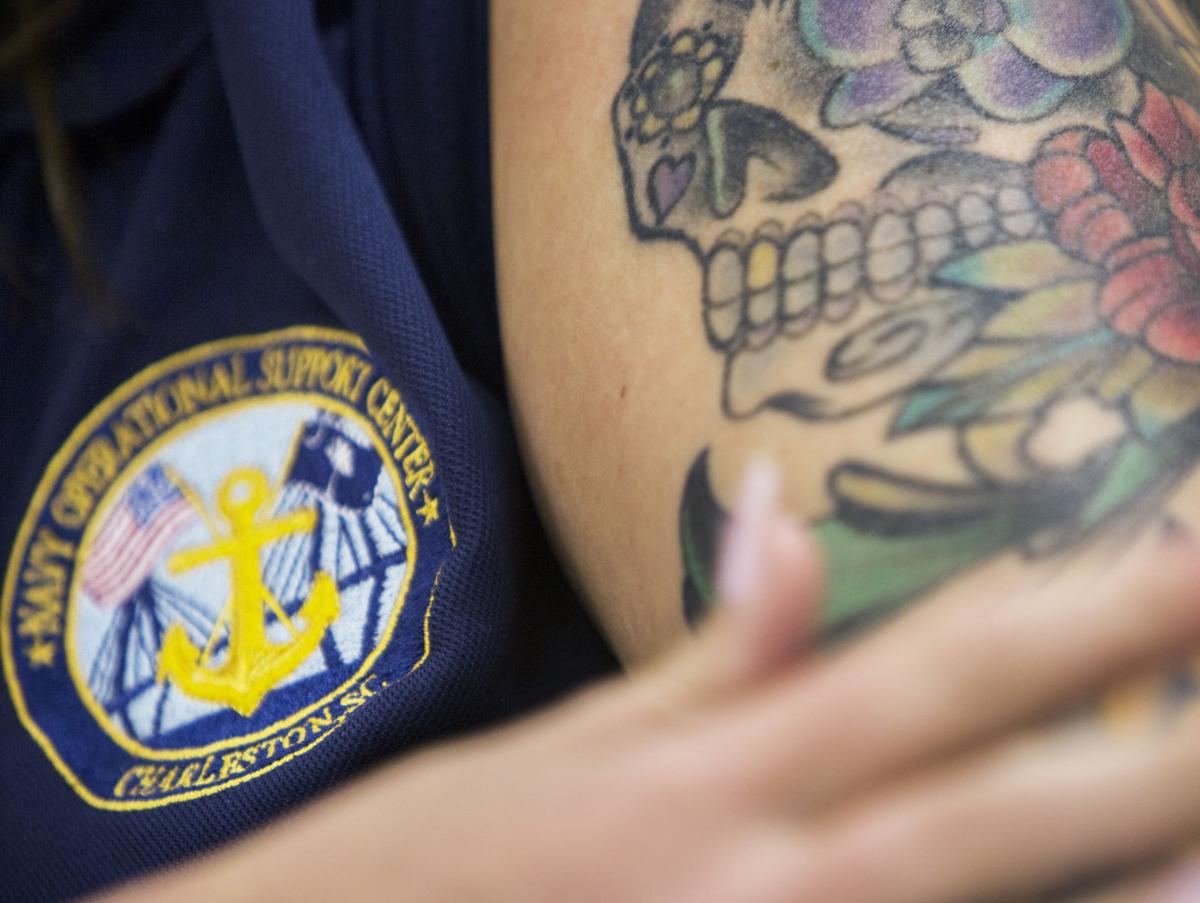 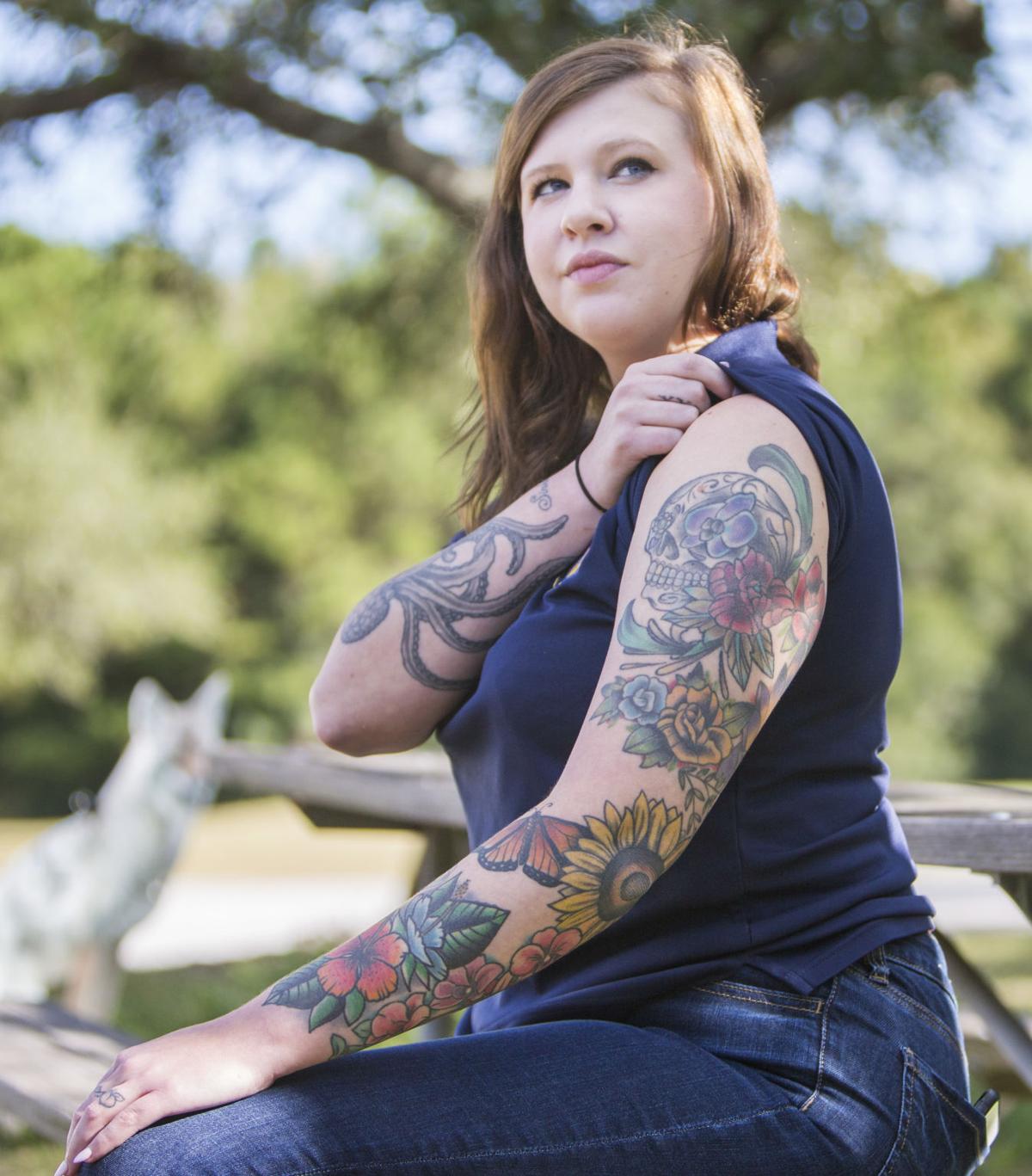 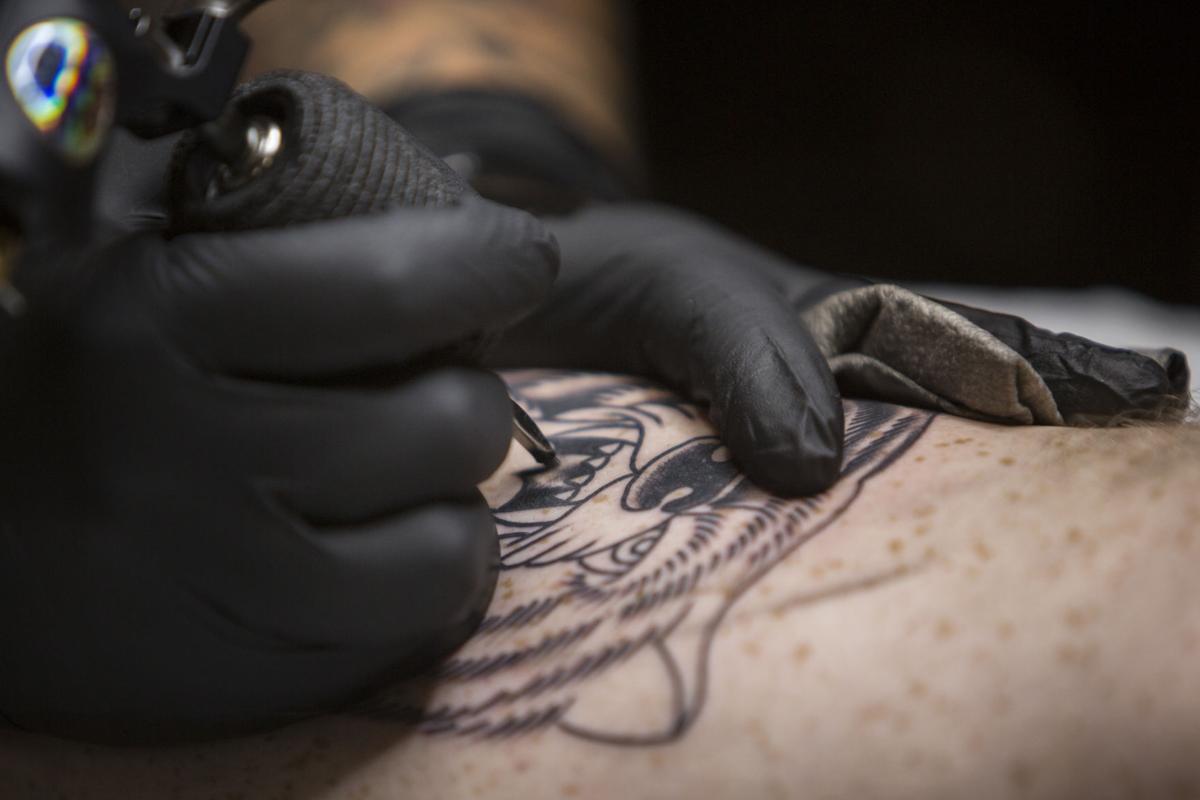 Chris Jones knows it's bad luck for a sailor to go out to sea without a pig and a rooster.

Dating back as far as the age of piracy in the 1700s, seamen would get a tattoo of the animals on their hands or feet to fulfill an old sailing adage.

"The saying was, 'A pig on the knee, never lost at sea. A cock on the right, never lose a fight,'" said Jones, an active-duty master-at-arms, essentially military police, at the nearby Naval Weapons Station in Berkeley County. He also works as a tattoo artist in West Ashley.

In the centuries since the Navy's founding, tattoos have gone from being traditional staples to bold expressions for sailors. It has become less stigmatized and more commonplace in society — and the Navy —to have multiple tattoos. This is due, in part, to the branch's effort in recent years to ease restrictions on how much ink and where it can be present on service member's bodies. The move has increased the recruiting pool for those who can join the service.

But the state of South Carolina is lagging behind the armed services in regards to tattoo culture.

It has been 15 years since the state lifted its ban on tattoo parlors, but it's still not as progressive as neighboring states. While the Navy allows sailors to get tattoos on the neck, under certain size specifications, it is unlawful for an artist to "tattoo any part of the head, face, or neck of another person," according to South Carolina state law.

The law is unusual and unique, but it hasn't stopped tattoo artists and sailors from expressing themselves and celebrating Navy culture with eclectic and bold designs.

Petty Officer 2nd Class Sarah Watson has dedicated one arm to her family and one arm to the Navy.

It starts with an octopus on her right arm. Beneath it is the phrase "sinking ships and deep depths," words her grandfather, a Marine veteran, had tattooed on his body. On her left knuckles are a peach, for her birthplace in Georgia, and a mountain, which represents a place she hopes to live someday: Tennessee. The rest of her left arm looks like a living garden, with a monarch butterfly dancing above a red-orange orchid placed on her pale skin.

Her first tattoo, the only one she had before she enlisted, was financed by her mother and father's divorce. She said her dad's hands got too fat, and he couldn't fit into his gold wedding band anymore. At 18 years old, she took it, pawned it for $100, bought her friend Taco Bell and then used the rest to get a pair of anchors inked on her chest.

Fellow sailors at boot camp joked that said she was ready to be a master chief, the highest enlisted rank in the Navy that is marked by an anchor insignia. She said other tattoos soon followed.

"There are people that are brand-new to the Navy and two weeks later, they'll have a full sleeve," Watson said.

Petty Officer 2nd Class Sabrina Cooley, Watson's friend and fellow sailor, estimates she has around a dozen tattoos. She describes hers as being less sentimental.

Her left arm focuses more on traditional Asian culture. There's a koi fish, a Geisha and a massive multicolored dragon whose long, scaly body stretches from her toned upper bicep to her left shoulder and chest. Others include an anchor on her ankle with her mom's initials. Both her parents were in the Navy.

Some of Watson and Cooley's designs wouldn't have been allowed a couple of years ago. Tattoos were traditionally hidden, kept under the cover of a sailor's uniform.

But in April 2016, the Navy allowed sailors to have multiple tattoos below the elbow or knee, including the wrists and hands. They could have one tattoo on their neck, including behind the ear, as long as it didn't exceed 1 inch in length or height in either or both directions. And sailors with visible tattoos were finally eligible for recruiting duty at boot camp in Great Lakes, Illinois, a chance for them to make rank.

“We just got to the point where we realized we needed to be honest with ourselves and put something in place that was going to reflect the realities of our country and the needs of our Navy,” Master Chief Petty Officer of the Navy Mike Stevens said in 2016. “We need to make sure that we’re not missing any opportunities to recruit and retain the best and the brightest because of our policies.”

Both Watson and Cooley considered different hand tattoos and neck tattoos when the Navy eased up its restrictions.

"There was extreme excitement," Cooley said. "I was able to tell my leadership I was getting something without asking for permission."

Watson and Cooley said the culture of getting tattoos is a part of the Navy, just like training or knowing knots. It's a way to bond with fellow sailors and it helps when you're a young enlisted service member, when expenses and inhibitions are low.

"You have a guaranteed paycheck and, when you're a young sailor, you have no bills," Cooley said. "You're staying in the barracks. Yeah, you're not making much. But you don't have to spend it on anything. So you talk with your friends and say, 'Let's go get a tattoo.' Or you go and buy things that you shouldn't. Like motorcycles."

While tattooing has been a part of Navy culture for centuries, the culture is still in its infancy in South Carolina.

The Palmetto State outlawed tattooing in the 1960s, with lawmakers fearing an epidemic of hepatitis similar to an outbreak that occurred in New York, supposedly traced to a tattoo artist working on Coney Island. Other states took similar measures. But by 2004, only South Carolina and Oklahoma still outlawed tattooing.

In the decade since the ban was lifted, more than 100 tattoo parlors have sprung up around the state. Watson said it makes it hard to find a variety of artists, and many of the more popular ones are booked for months in advance. Paired with the state's restrictions on inking above the shoulders, face and neck, many sailors will get theirs illustrations overseas or in a neighboring state.

"South Carolina is so brand-new to the tattoo scene," Watson said. "I'll go to other areas, such as Atlanta."

Laws and regulations about tattoo artists are regulated by the S.C. Department of Heath and Environmental Control. The agency regulates its ink restrictions through routine inspections. But proving that an artist gave a tattoo above the shoulders is a tougher task.

"DHEC inspectors would need to observe or be able to substantiate that a tattoo artist in a tattoo facility tattooed the head, face, or neck of another person," DHEC Spokesman Chris Delcamp said. "If DHEC cites a tattoo facility for this violation, enforcement action would be considered."

South Carolina is the only state with such a restriction. In Georgia, you cannot get tattooed within 1 inch of the eye.

He is inspired by Norman Keith Collins, known to the public more commonly as the legendary ink illustrator "Sailor Jerry." Those tattoos are highlighted by bold, dark lines and bright colors. The classics include a swallow tattoo (The bird is usually given to sailors who've traveled 5,000 nautical miles.), bottles of booze, anchors and pinup girls.

The artist has earned his own nickname, "Clipper" Chris Jones, known for inking ships into new sailors. He said it's not uncommon for him to repeatedly tattoo a new recruit from the Charleston Naval Weapons Station.

"Every time the Weapons Station gets a new set of students, they'll come in and make appointments in their service uniforms," Jones said. "When I joined the Navy, you didn't see sailors with full sleeves. Now, it's the norm."

Tattoos are permanent, but service in the Navy is temporary. Both Watson and Cooley estimate that they will be back in civilian clothes within a year. What will they reflect on, after their time at sea is done? What will they think about the ink etched into their bodies and the story it tells?

"I'll regret not getting more," Cooley said with a smile.