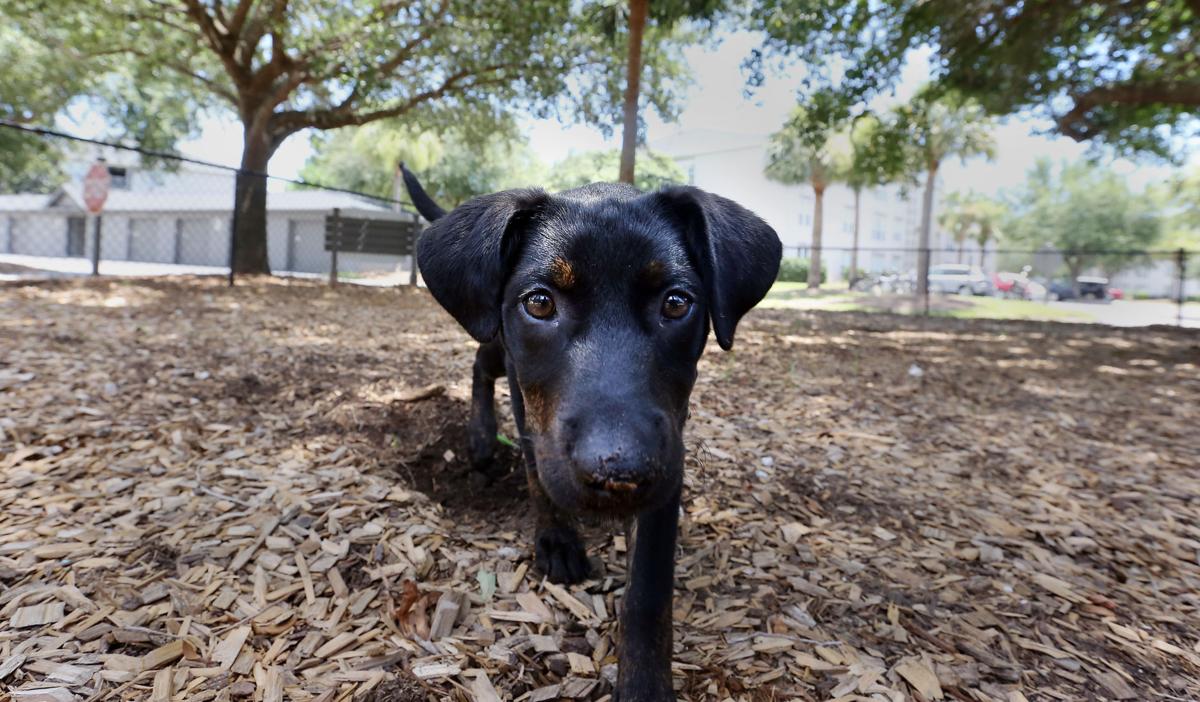 Three-month-old Wynona plays in one of the dog parks at Riverland Woods Apartments on Wednesday, July 12, 2017. Brad Nettles/Staff 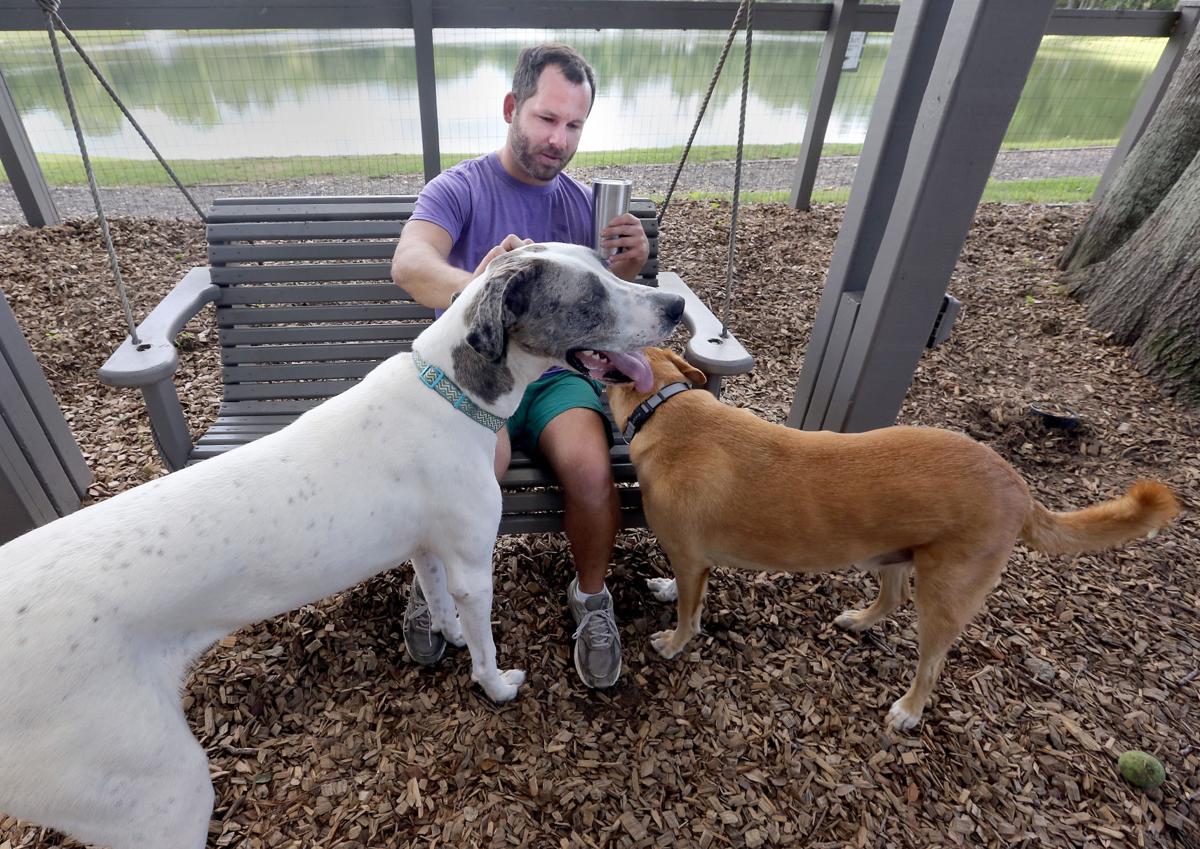 Riverland Woods Apartments resident Bill Gilbert pets a neighbor's dog as he sits with his 6-year-old dog Oliver in the dog park at the James Island apartments on Wednesday, July 12, 2017. Brad Nettles/Staff 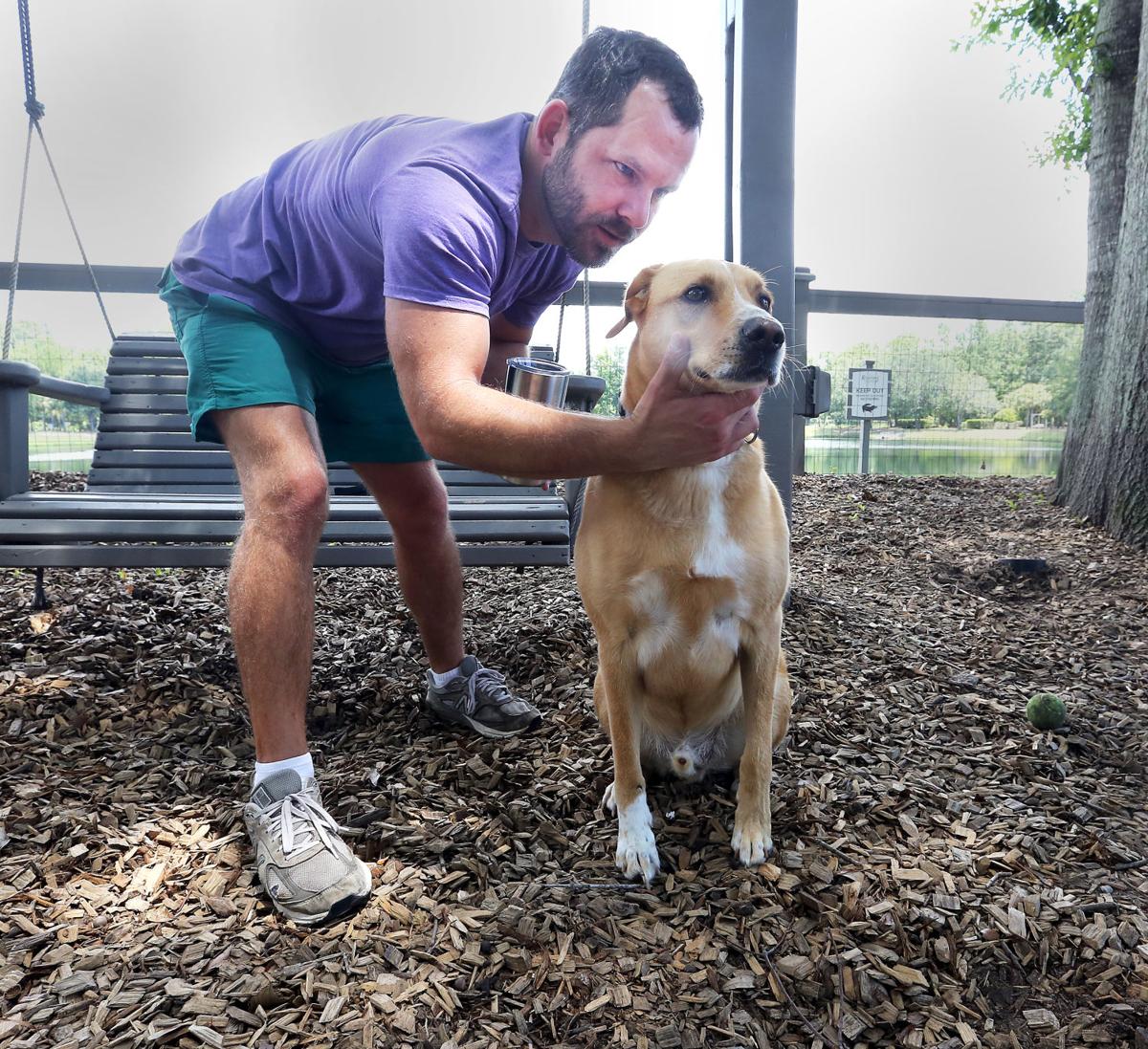 Three-month-old Wynona plays in one of the dog parks at Riverland Woods Apartments on Wednesday, July 12, 2017. Brad Nettles/Staff

Riverland Woods Apartments resident Bill Gilbert pets a neighbor's dog as he sits with his 6-year-old dog Oliver in the dog park at the James Island apartments on Wednesday, July 12, 2017. Brad Nettles/Staff

He would see the poop when he took his dog, Oliver, out for walks. Sometimes he stepped in it.

"If it was anything more than convenient, then some wouldn't pick it up," lamented Gilbert, who has lived at the Riverland Woods Apartments for three years.

Five months after apartment management announced it would use DNA testing for dogs in the community to fine owners who don't clean up after their pets, Gilbert said the feces problem has improved.

Riverland Woods is one of 150 apartment, condo and housing communities in the state that are turning to PooPrints' DNA testing services to solve a problem that has been a stink for residents.

The Knoxville, Tenn.-based company, which is used by Riverland Woods, swabs dogs' mouths, enters their DNA profile into a registry and provides guidance for property management to set fines for offenders.

“When the property makes the announcement (about testing) to the residents, the problem drops dramatically," said David Barabas, a South Carolina representative for PooPrints. "It’s almost solved just because they’re announcing that they’re doing PooPrints. When it comes to taking samples after that, there’s not that much.”

It costs about $40 to have a dog swabbed and $60 to analyze the excrement, Barabas said.

Pet waste often ends up in water runoff that leads to some of the state's waterways. Especially after storms, excrement and toxic materials get washed into the water.

The goal of PooPrint's waste management service is to have a cleaner environment for both owners and dogs, Barabas said.

Carrie Fulmer, assistant manager for Riverland Woods, said there are more than 100 dogs that live in the apartment community.

Since January, only one individual has been fined and eight waste samples were tested, she said. The fine is $250.

"It makes it less work for maintenance, and it makes it more enjoyable to walk around in the grassy areas,” Fulmer said.

"It's an efficient program, and it’s a collaborative effort on all parts," said Travis Millner, property manager of the apartments.

There are more than 200 dogs that live in the community, he said.

Since the program began in 2015, Millner said it has served as a deterrence. There hasn't been a conclusive testing case since January, he said.

Offenders pay a $150 fine initially, $250 the second time, then $350 the next time, Miller said. The fourth time triggers the eviction process, but no residents have ever gotten there.

Most of the communities that use PooPrints in South Carolina are in the Lowcountry, Barabas said. There's also been some growth in the use of the service in Myrtle Beach, Columbia, Greenville and Rock Hill, he said.

Gilbert sat in a swing bench at his apartment's dog park and watched Oliver play with a Great Dane named Storm.

He supports the fine system, but thinks there is another way to remind people that enforcement is serious.

"I wouldn't mind there being a wall of shame for people who don't pick up after their dogs," Gilbert said. "A monetary fine works, but frankly a wall would validate the system."

Mina covers local news and North Charleston at The Post and Courier. She has written for the Boston Globe, the Sun News in Lowell, Mass. and The Daily Free Press at Boston University.

A biologist on Kiawah Island has taken on a project to band as many birds as humanly feasible to study how the changing environment impacts their migration. Read moreKiawah Island biologist bands thousands of birds each season to track migration patterns

Gerard Antonio Felder-Davis, 24, was booked Feb. 3 into the Dorchester County jail in the 2020 shooting death of Melvin Smalls III. Read moreNorth Charleston man charged in 2020 homicide after found in California by FBI