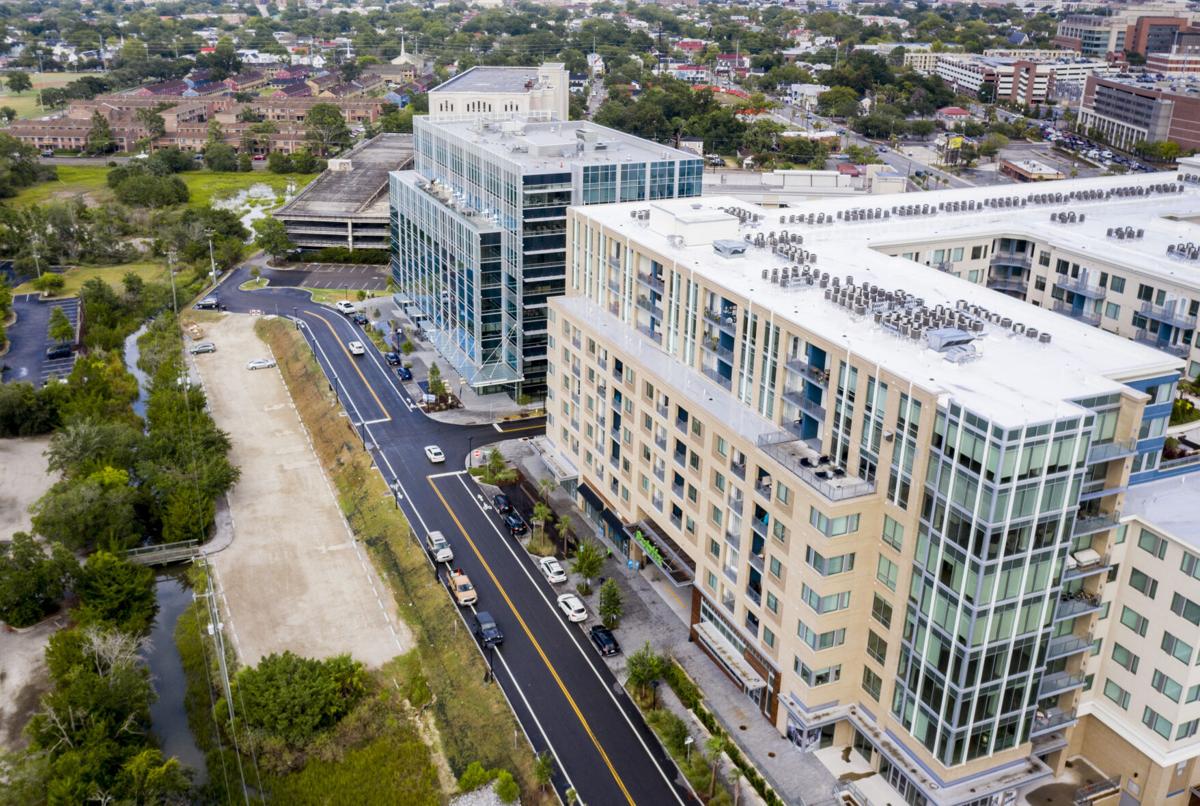 The 10 WestEdge development in Charleston is one of 14 projects in the city that was zoned for higher density housing. The developer also paid $1.5 million to avoid pricing 20 percent of its apartments and condos for lower-income workers living in Charleston. Gavin McIntyre/ Staff 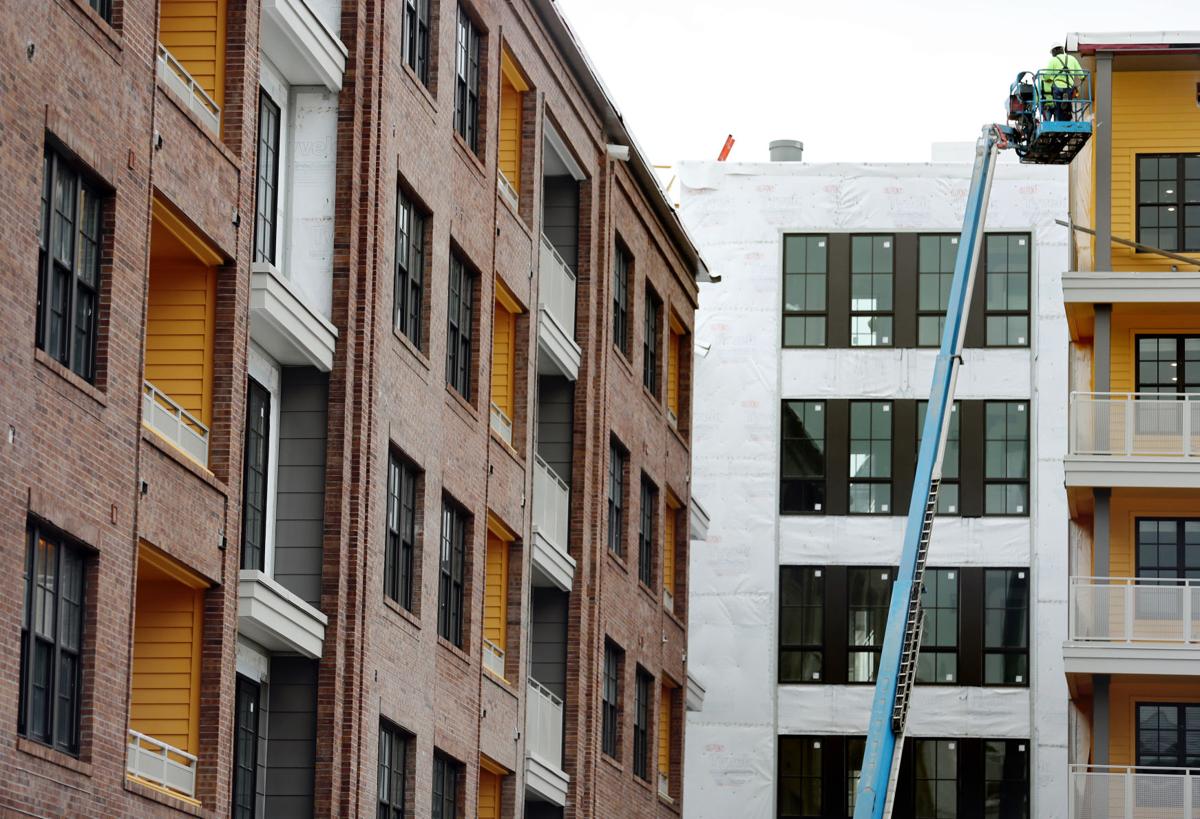 The New Market Square Apartments on Huger Street was zoned specifically for high-density development in Charleston. The complex could have been required to set aside more than 20 of its housing units for an individual who earns less than $45,400 per year. But the property developer chose to pay roughly $656,000 to avoid that. Grace Beahm Alford/Staff 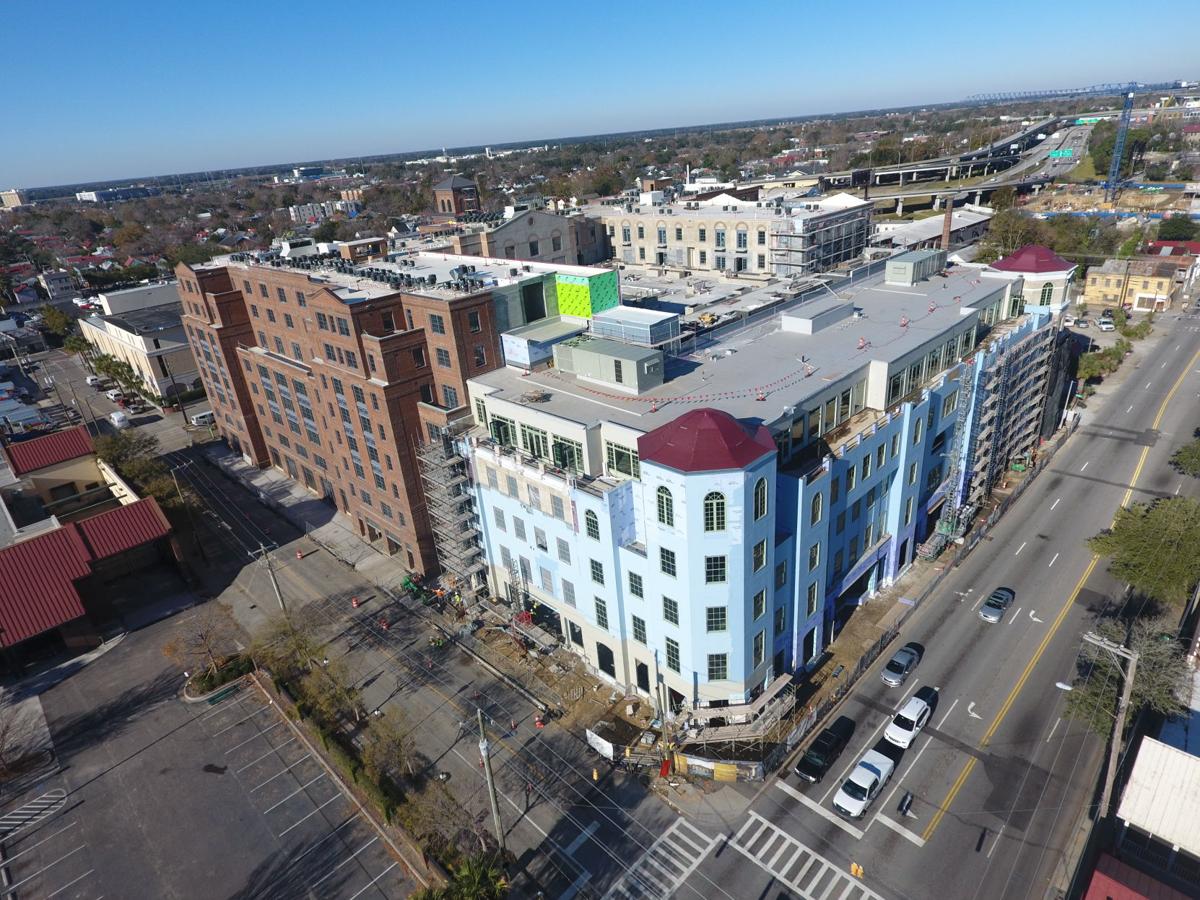 The Courier Square project at Columbus and Meeting streets paid the City of Charleston roughly $1.4 million in 2018 to avoid including affordable housing units in the development. The project was developed by Greystar. That company leased the land from Evening Post Industries, the parent company of The Post and Courier. Provided/NAI Charleston 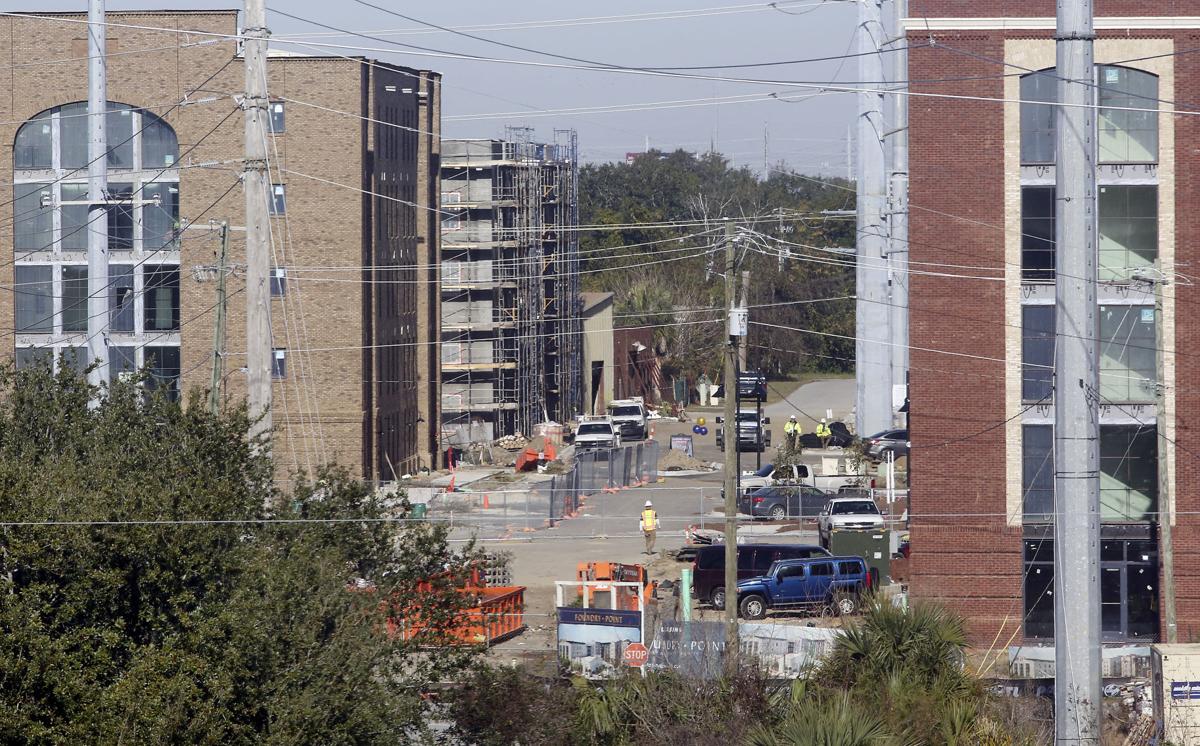 The developer of Foundry Point apartments on Brigade Street is expected to pay the City of Charleston more than $1 million to avoid incorporating more than 40 affordable housing units into the project. File/Brad Nettles/Staff

As luxury apartment complexes continue to spring up on the Charleston peninsula, city officials plan to increase the fees they levy against developers who refuse to incorporate affordable housing into their projects.

The city has charged a so-called workforce housing fee to more than a dozen companies building high-end apartments and condominiums in Charleston over the past three years.

The money raised through those fees is an increasingly important tool in Charleston's push to expand affordable housing options as skyrocketing rent and ballooning home prices threaten to drive lower-income families out of the area.

But a new report suggests the setup is not benefiting Charleston's working class as much as the city's leaders would like. As a result, the city council may soon vote to place a higher toll on the large apartment complexes that continue to take over parts of Charleston's growing skyline.

The issue is likely to come down to whether Charleston's elected leaders believe the developers and owners of those properties are contributing enough to the city's goal of alleviating the affordable housing crisis.

Councilman Robert Mitchell, who chairs the city's Community Development Committee, doesn't believe they are just yet. Expanding the fees, he said, is just one way to ensure Charleston continues to be a place where lower-income families can live and work.

"The people living here, and some people who were born and raised here, can't stay anymore," said Mitchell, who represents the east side of the peninsula. "Things change. Everything's changed. But even with the changes, we need to make sure we are putting everybody in the equation. That's it. That's all I'm saying."

It's unclear if a larger fee would alter any pending development projects on the peninsula or whether the development community will push back on the council's plan to raise those costs.

Greystar, which is in the process of planning a brand new complex along King Street, declined to comment. (The property for that project is being leased from Evening Post Industries, the parent company of The Post and Courier.)

Developers do have a choice of whether they pay the fee. Under the city's rules, developers can ask for their property to be placed into a special zoning category, known as mixed use workforce housing.

That zoning allows them to build more tightly packed apartments and condos, but in return, those developers are required to help the city foster more affordable housing.

They can do that in one of three ways: They can either devote 20 percent of their own project to affordable housing. They can donate other land to the city. Or they can pay the workforce housing fee, which goes into a fund that helps finance affordable apartments and homes elsewhere in Charleston.

The fee each developer pays is based on the size of their construction project. The city currently charges $5.10 per square foot for any new project that is rezoned and decides not to include affordable housing in its designs.

That rate can add over a million dollars to the final price tag of some of the larger housing projects that were undertaken in Charleston in recent years.

When the fee was created in late 2017, city officials hoped the extra cost would encourage private developers to simply integrate affordable housing into their own construction plans. But that's not been the result.

Instead, nearly every company that built a multi-story complex in the past three years chose to pay the extra fee in order to avoid pricing a portion of their apartments and condos at more-affordable rates over the next 25 years. 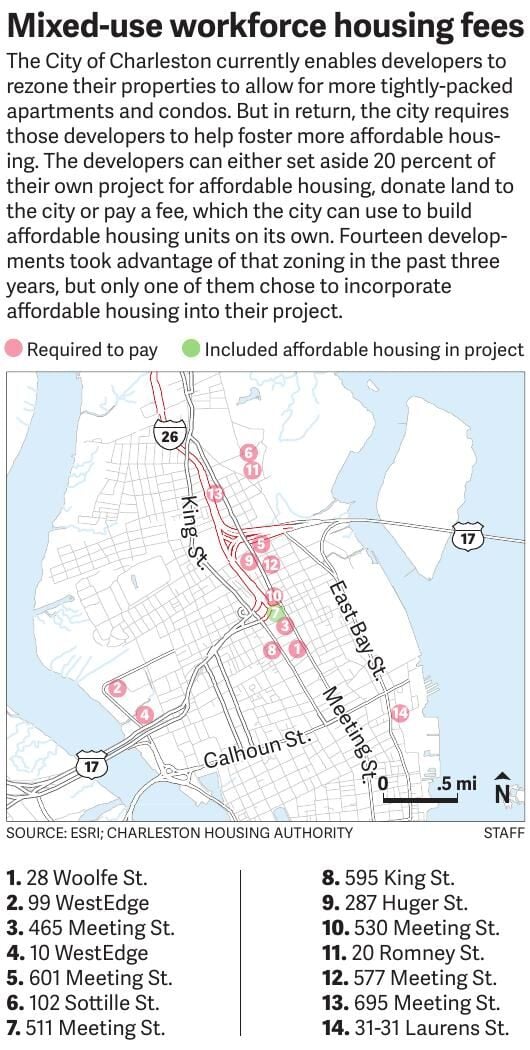 The report provided to city council in January showed that 14 different projects on the peninsula took advantage of the special zoning offered by the city.

Geona Johnson, Charleston's director of Housing and Community Development, believes that outcome is a clear indication that the city's fee is too low.

“It tells me — and this is totally my opinion — that the fee is not as bad as the developers said it was,” Johnson told city council members in February.

Councilwoman Carol Jackson, who represents James Island, agreed. The report, she said, shows that it's still more lucrative for developers to pay the fee and sidestep the city's affordable housing requirements.

Private developers may not be buying into the city's affordable housing policies like council members hoped, but that doesn't mean the city's efforts over the past three years were unsuccessful.

The city expects to collect more than $11.1 million off the 13 apartment complexes that opted not to include affordable housing in their development plans.

All of that money goes into a special account the city can use for affordable housing initiatives throughout Charleston.

Johnson, who has led the city's housing department for more than a decade, said that dedicated source of funding is a huge asset to Charleston and the city's residents. And she and her team have not wasted any time in putting it to use.

In her report to city council, Johnson noted that her department already spent roughly $7.1 million from the affordable housing fees by the beginning of this year.

That funding helped buy land, subsidize construction and create more than 237 affordable housing units in the city, she said. Those units include both apartments and homes that are sold to lower-income buyers.

The extra housing stock puts the city in a better position than it was, Johnson said, especially since those units will be priced at affordable rates for decades to come.

But the city could still be doing more, she said.

According to the latest estimates, Charleston will need another 12,286 affordable homes and apartments by 2030 in order to eliminate what the city calls the "affordability gap."

More than 400 affordable apartments are coming to the Charleston peninsula

One of the primary reasons the city wants to bump up the fee on private developers is because of the growing cost of constructing affordable housing.

In its report, the housing department noted that it can sometimes cost up to $250,000 for the city and its housing partners to locate, design, engineer and fully construct one affordable home.

It costs less for apartments, but with property values continuing to spike, the development of affordable housing is expected to become a very expensive undertaking in the future.

Increasing the affordable housing fees now, Johnson said, would enable her team to continue its work, and potentially grow those efforts.

At the same time, some city council members hope that a larger fee will finally give them enough leverage to convince private developers to mix affordable housing into their projects.

There could be significant benefits to that outcome, according to the city's report. The high-density apartment buildings that private developers have built in recent years can likely provide far more affordable housing units than the city can build on its own.

Those apartment complexes are also likely to be located on the peninsula, where it's becoming harder for the city to find land to purchase at a decent price.

Charleston's leaders recently put forward a proposal that will incrementally increase the fee for developers, depending on how much of their project they reserve for affordable housing. The new fees start at $7.50 per square foot and could increase to $15 per square foot for companies that don't include any affordable housing units in their plans.

The fees would also be adjusted based on inflation.

Councilman William Dudley Gregorie, who represents residents on the west side of the peninsula, doesn't see a downside to that plan at this point.

It will either bring the developers to the table to work with the city on affordable housing, he said, or it will give the city more money to work with. Either one works for him.

“I’m for anything that is going to add to the affordable housing inventory,” Gregorie said.