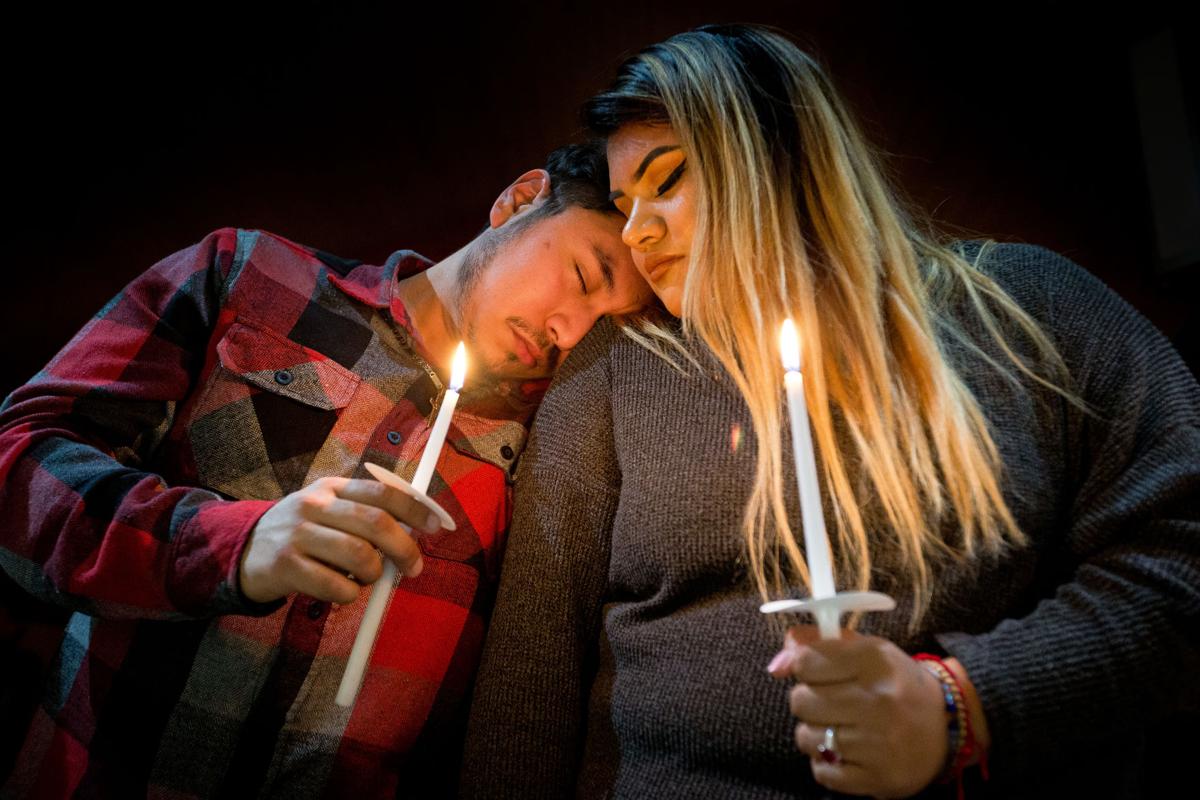 Luis Balderas Lopez leans up against Samantha Sanchez during a candlelit prayer led by Bishop Robert Guglielmone in support of Dreamers and the DACA program. "Keep pushing forward even if the odds are against you," Lopez said while he spoke to the crowd at St. Thomas the Apostle Church on Monday, Jan. 27, 2020 in North Charleston. Andrew Whitaker/Staff 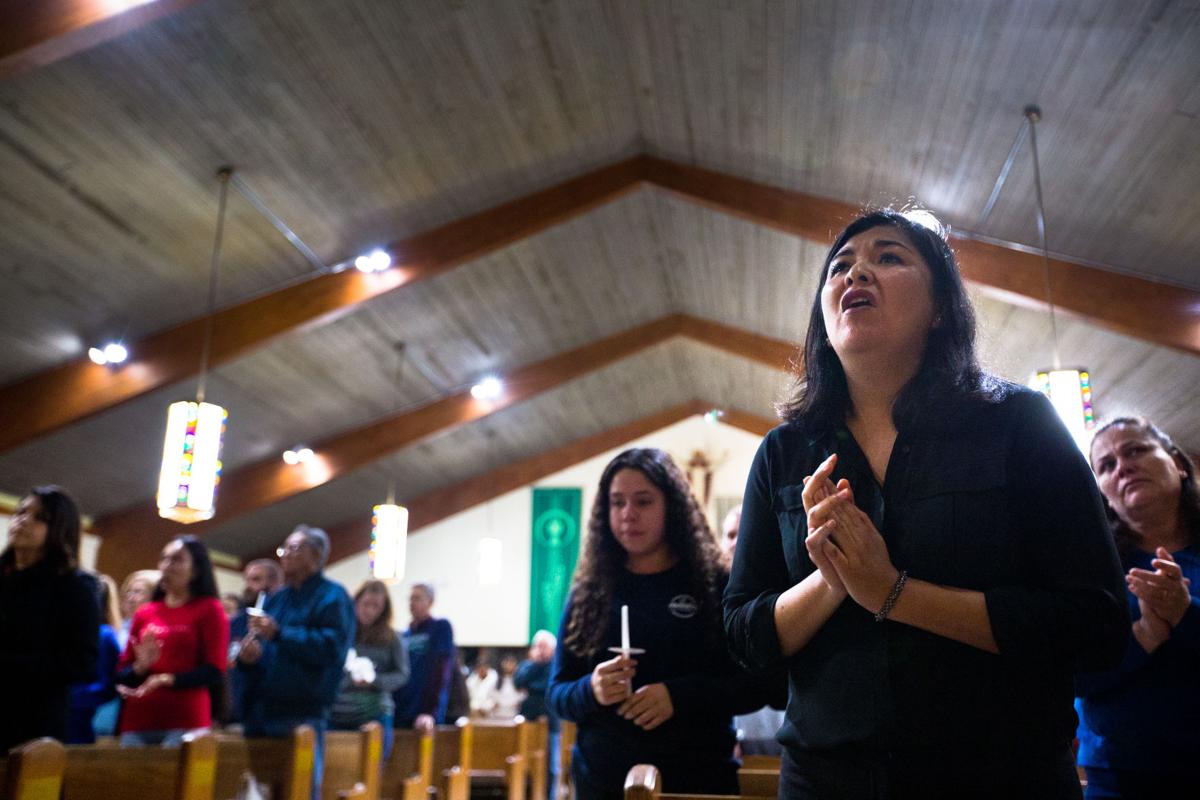 Youth minister Estela Landaverde (right) sings along after a candlelit prayer led by Bishop Robert Guglielmone in support of Dreamers and the DACA program at St. Thomas the Apostle Church on Monday, Jan. 27, 2020 in North Charleston. Andrew J. Whitaker/Staff 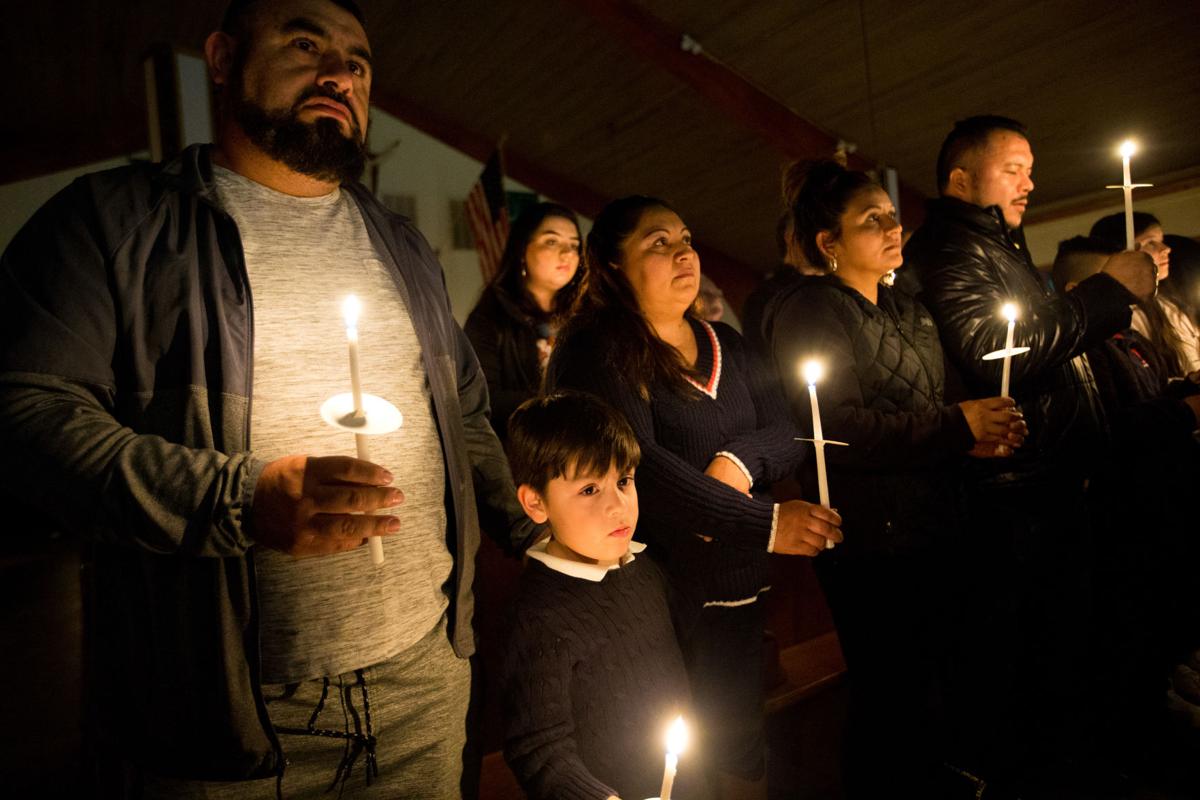 Luis Jamie, Bryan Jamie and Josefina Hernandez bow their heads during a candlelit prayer led by Bishop Robert Guglielmone in support of Dreamers and the DACA program at St. Thomas the Apostle Church on Monday, Jan. 27, 2020 in North Charleston. Andrew J. Whitaker/Staff

Johan Duque was a straight-A student. He loved to learn, and he had dreams of being an architect or a civil engineer.

But as he was entering high school a few years ago, those hopes were crushed. Duque was told it was unlikely he could achieve those dreams because he was an undocumented immigrant and, therefore, would face obstacles to continuing his education or making use of a degree.

DACA brought hope back into his life, Duque said. As the U.S. Supreme Court deliberates on whether the program should continue, the Charleston community, including Duque's Catholic community, rallied around him and other DACA recipients.

DACA, or Deferred Action for Childhood Arrivals, is a federal program started in 2012 that allows young people illegally brought to the United States as children to obtain a work permit and be protected from deportation. Many fear the high court will strike DACA down this year.

Members of the Catholic community and other Charlestonians gathered Monday night for a candlelight vigil to send prayers to DACA recipients and the justices determining their future.

"They grow up faster than other kids," said Estela Landaverde, who works with many DACA recipients as the Hispanic Youth Ministry Coordinator for the Roman Catholic Diocese of Charleston.

She said many young people are devastated by the thought DACA could end, but they aren't giving up, she said. "Their faith is incredible. They are so resilient," Landaverde said.

Luis Balderas Lopez, 21, shared his pain at missing out on many common milestones as a teenager. He couldn't get a driver's license or a first job, he said.

"I was afraid as a kid — to this day I'm still afraid — that one trip to the grocery store could be my last," Lopez said. "If it wasn't for DACA, I would be afraid to drive to work."

Lopez was brought to the United States when he was a year old. After receiving DACA protection in 2017, he felt he had a pathway to dreams that once seemed out of reach.

It didn't solve all his problems. Lopez was ineligible for most scholarships and financial aid due to his immigration status.

He's now training to be a paramedic. He wants to give back to the community, and his family, for the sacrifices they made for him.

"I am one of the 12,000 DACA recipients here in South Carolina that will not give up, because I am a dreamer," Lopez said.

Duque, who was brought to the States before his third birthday, initially lost hope as a teenager because of the challenges he faced. After years of academic success, he began failing classes. He felt that there wasn't a point to trying anymore.

When he became eligible for DACA his sophomore year, that changed. "My hope was ignited again," he said. "DACA gave me hope that I once lost and the peace of mind that I could do anything I wanted if I just worked hard for it."

Brenda Escobedo, 22, said her immigration status posed challenges that often felt insurmountable. When opportunities were scarce in South Carolina, her family encouraged her to move to California. It was heartbreaking to separate from her family so early, she said.

"You're stuck. There's a time in your life you realize you can't go further because the law won't allow you to," Escobedo said.

Those who came to the vigil prayed that DACA would stay in place and could one day offer a path to citizenship. No matter what the Supreme Court decides, however, "this is the home that we know," Escobedo said.

"With or without DACA, we are capable of so much," she said.