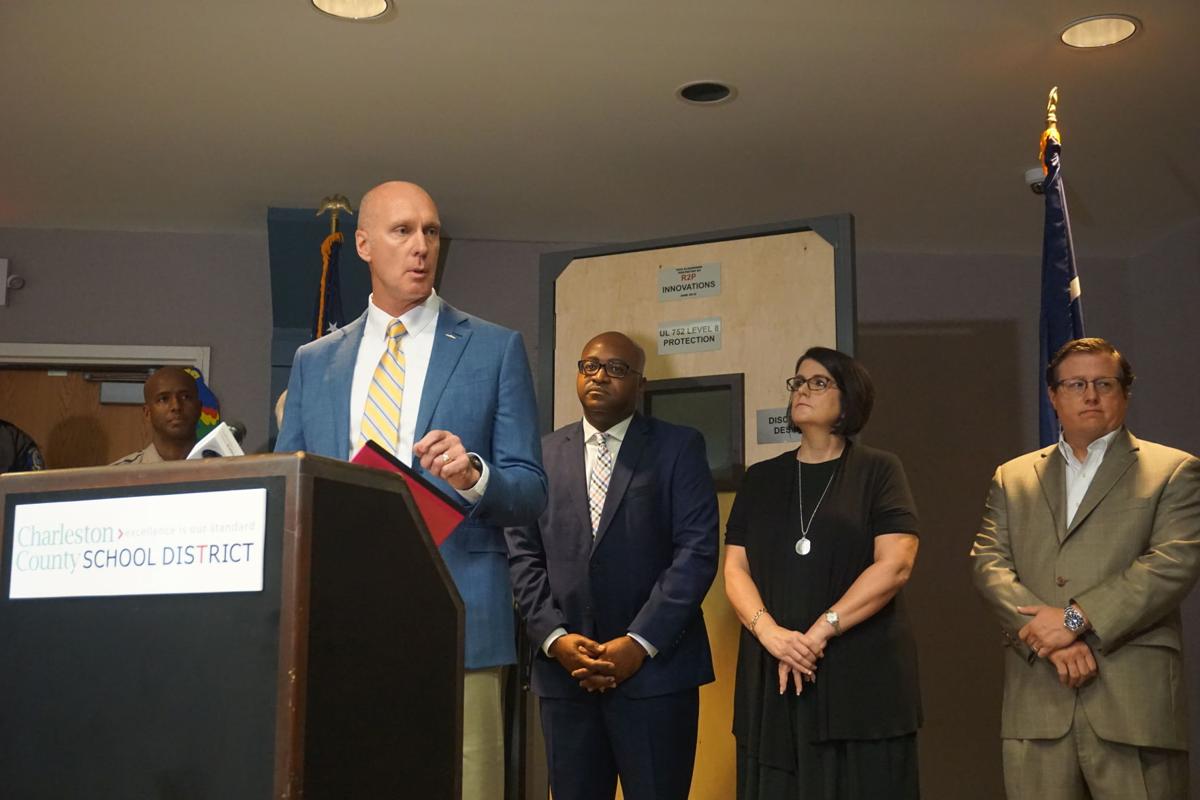 Tony Deering, CEO of Goose Creek-based R2P Innovations, stands in front of a classroom-style door his company built to survive rounds fired from high-powered military rifles. At a press conference on June 28, 2018, Deering announced his company will install bulletproof doors in three Charleston County schools this fall as part of a free pilot program, possibly equipping every classroom door int he district later down the road. Paul Bowers/Staff 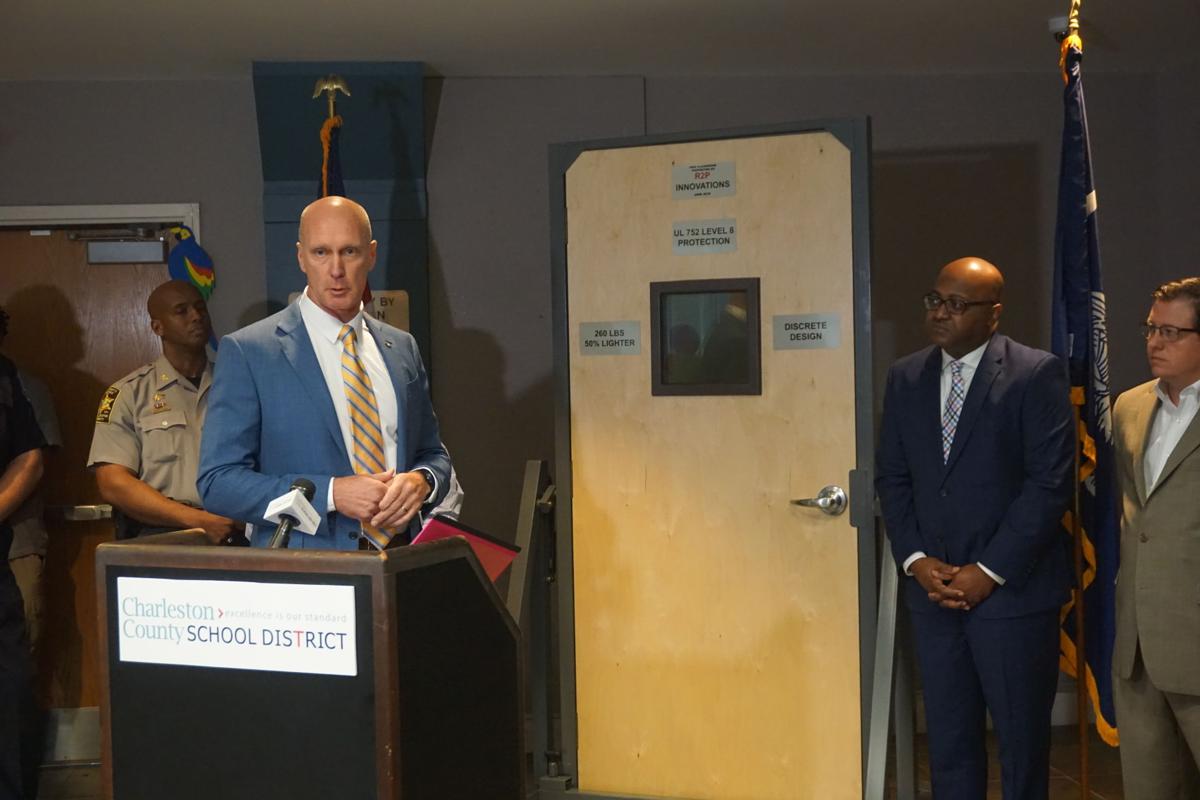 Tony Deering, CEO of Goose Creek-based R2P Innovations, stands in front of a classroom-style door his company built to survive rounds fired from high-powered military rifles. At a press conference on June 28, 2018, Deering announced his company will install bulletproof doors in three Charleston County schools this fall as part of a free pilot program, possibly equipping every classroom door int he district later down the road. Paul Bowers/Staff

As part of a push to fortify schools against mass shooters armed with high-powered rifles, the Charleston County School District is having bullet-resistant classroom doors installed in three of its schools this summer.

The three schools, which district officials declined to identify for security reasons, will serve as a trial run in the coming school year, partly to make sure students are able to open and close the slightly heavier doors.

Eventually, the district could install these doors in all of its school buildings.

His new business venture, R2P Innovations, makes lightweight yet bullet-resistant doors for schools. He said his company will provide the doors for the pilot program free of charge in hopes Charleston County Schools could become his first customer in the school market.

"Over the last four years, we've taken the experience we gleaned from protecting the war fighter and incorporated that into a solution that can now address another clear and present danger," Deering said.

Company employees helped wheel in a demonstration door at the school district's downtown office Thursday. Deering declined to say what the door was made of.

The nondescript door with a clear window is rated Level 8 on the UL 752 rating scale for bullet resistant materials, meaning it can withstand up to eight shots from a .30-06 rifle, according to a chart from the trade group Steel Door Institute. (The scale goes up to 10, with the highest level able to withstand a blast from a .50-caliber anti-tank round.)

Deering noted that such a door can also withstand shots fired from an AR-15 or other military-style semiautomatic rifles, like ones used in some recent mass shootings. He said they're "nigh-unbreachable" without using explosives.

Deering said the price of his doors varies based on their dimensions, finish and window size, but he estimated each costs about $4,000, not including installation.

Jeff Borowy, the district's Chief Operating Officer, said the district does not have a precise count of classroom doors in its buildings but he estimated the total number of interior doors between 8,000 and 10,000.

Using those rounded figures, the cost of replacing all interior doors with bullet-resistant ones would run between $32 million and $40 million.

R2P is not the only steel-door company angling for a piece of the burgeoning school security market, and school board Chair Kate Darby said the district would seek proposals from other vendors before going all-in on armored doors.

A February feature in USA Today noted that companies have marketed such doors to schools for years, but business has been on the upswing recently. It noted that the U.S. subsidiary of Swedish lock and door company Assa Abloy Group had done $47 million in business with U.S. grade schools in 2017, up 10 percent from 2016.

Like many districts, Charleston County has been weighing its options for increased security in the wake of the February massacre at Marjory Stoneman Douglas High in Parkland, Fla. Even before that, the school board considered — and rejected — a plan to install metal detectors following a pair of gun incidents in North Charleston schools.

Board Chair Darby, Vice Chair the Rev. Eric Mack, North Charleston Mayor Keith Summey, Charleston County Councilman Elliott Summey, Charleston Police Chief Luther Reynolds, and Mount Pleasant Police Chief Carl Ritchie took turns at the microphone during Thursday's press conference about the doors. Borowy gave final approval to the pilot program, which did not require a board vote because it will not cost any money.

Reynolds stressed that no single solution will prevent future mass shootings and emphasized the importance of cooperation between the governments and law enforcement agencies.

The school district's $507.7 million general operating budget for the 2018-19 school year includes a $2.3 million increase for security initiatives. The district plans to hire an emergency planner, hire a district search team to conduct random contraband searches, and help fund a school resource officer in all of its elementary schools. The district already has officers working in every middle and high school.

Reynolds and the Charleston Police Department have pushed back against the school resource officer proposal. The agency already has 18 officers assigned to its School Security Response Team, working in geographic clusters across the city to provide security to the 45 public elementary, private and charter schools within their jurisdiction.

Reynolds has argued that the team's tactical training and constant rotation between schools are a more effective crime deterrent than stationary resource officers.

Going forward, Reynolds said he hopes to find a "blend" between the two approaches that will meet the district's needs while keeping the city's school security team intact.