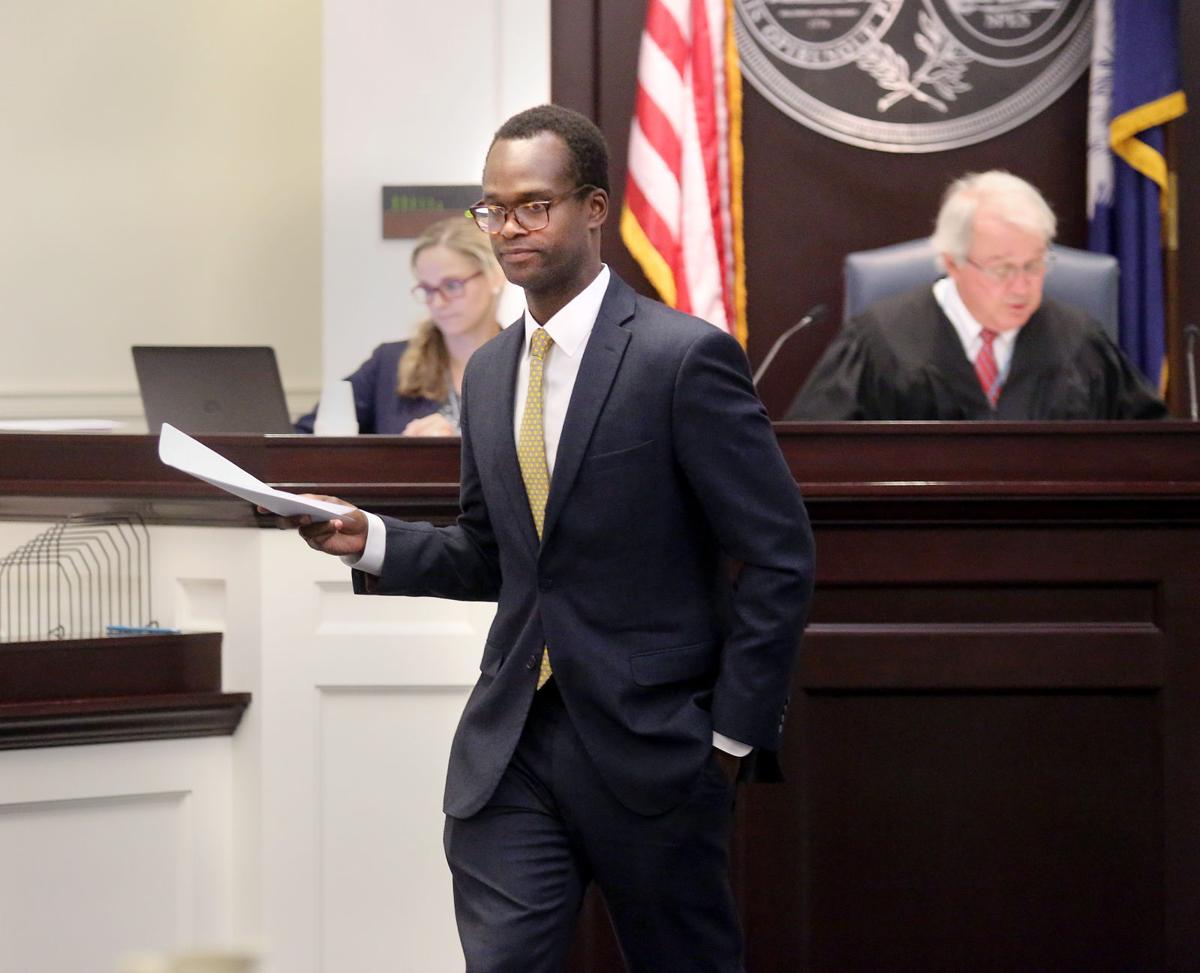 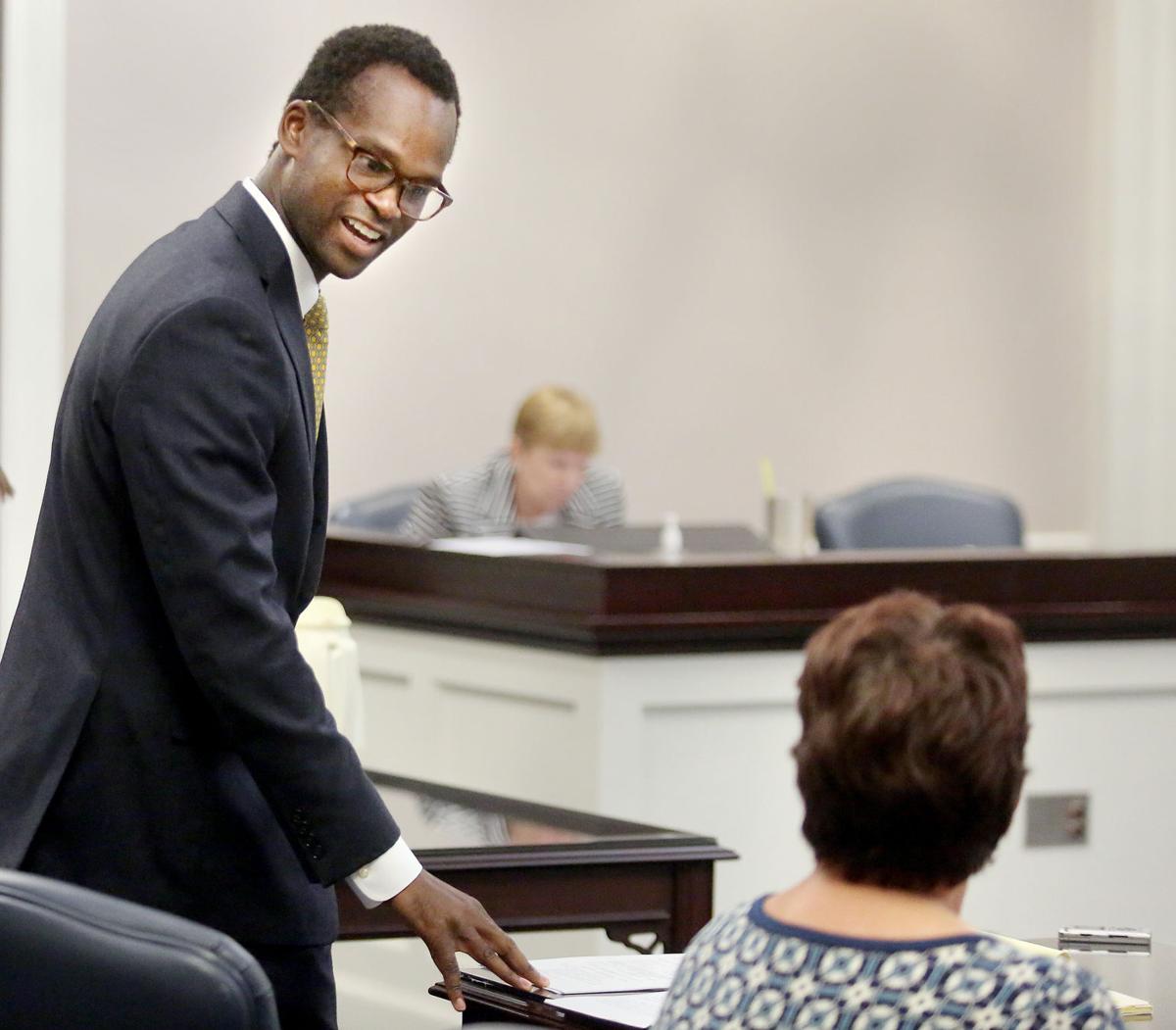 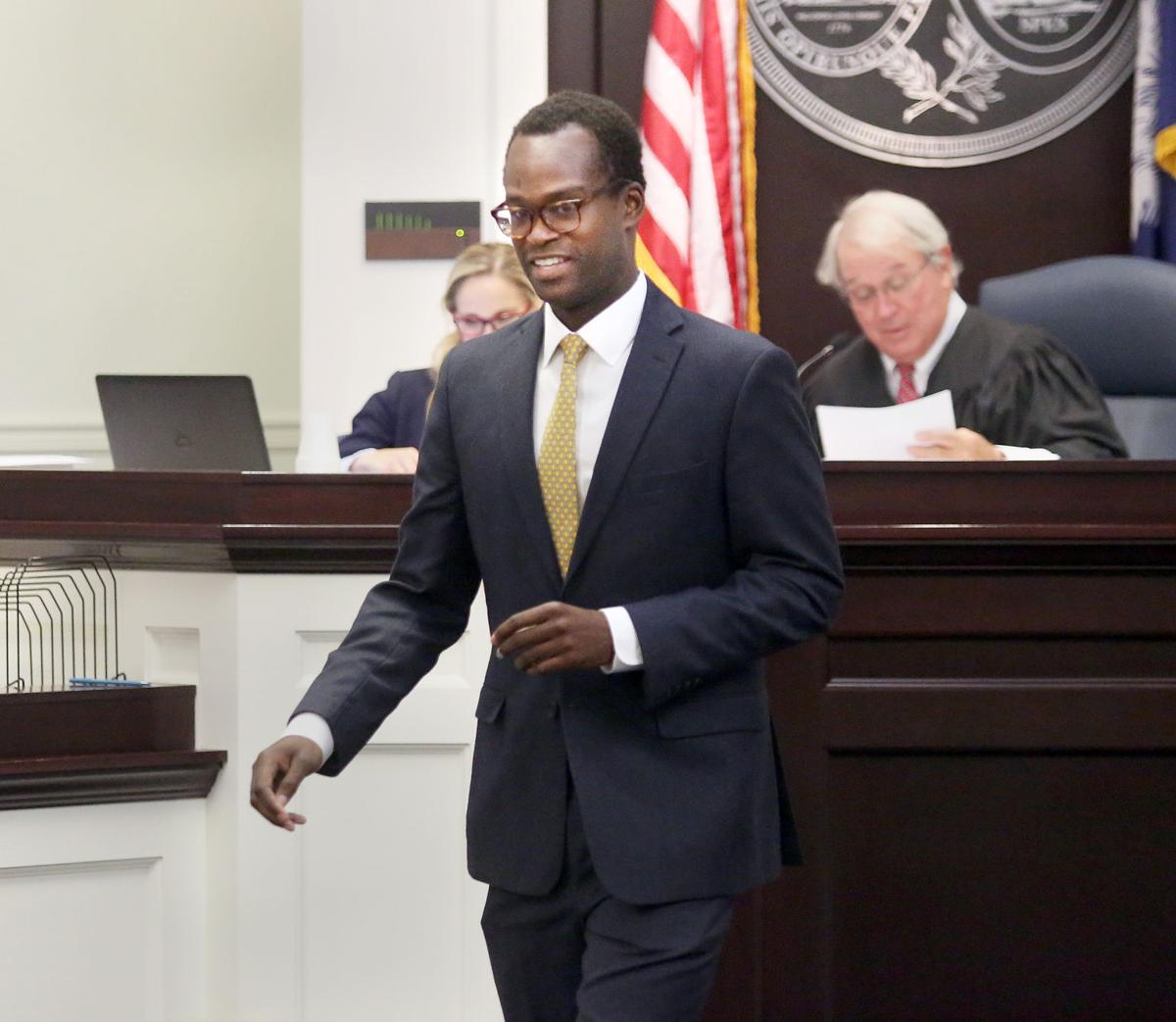 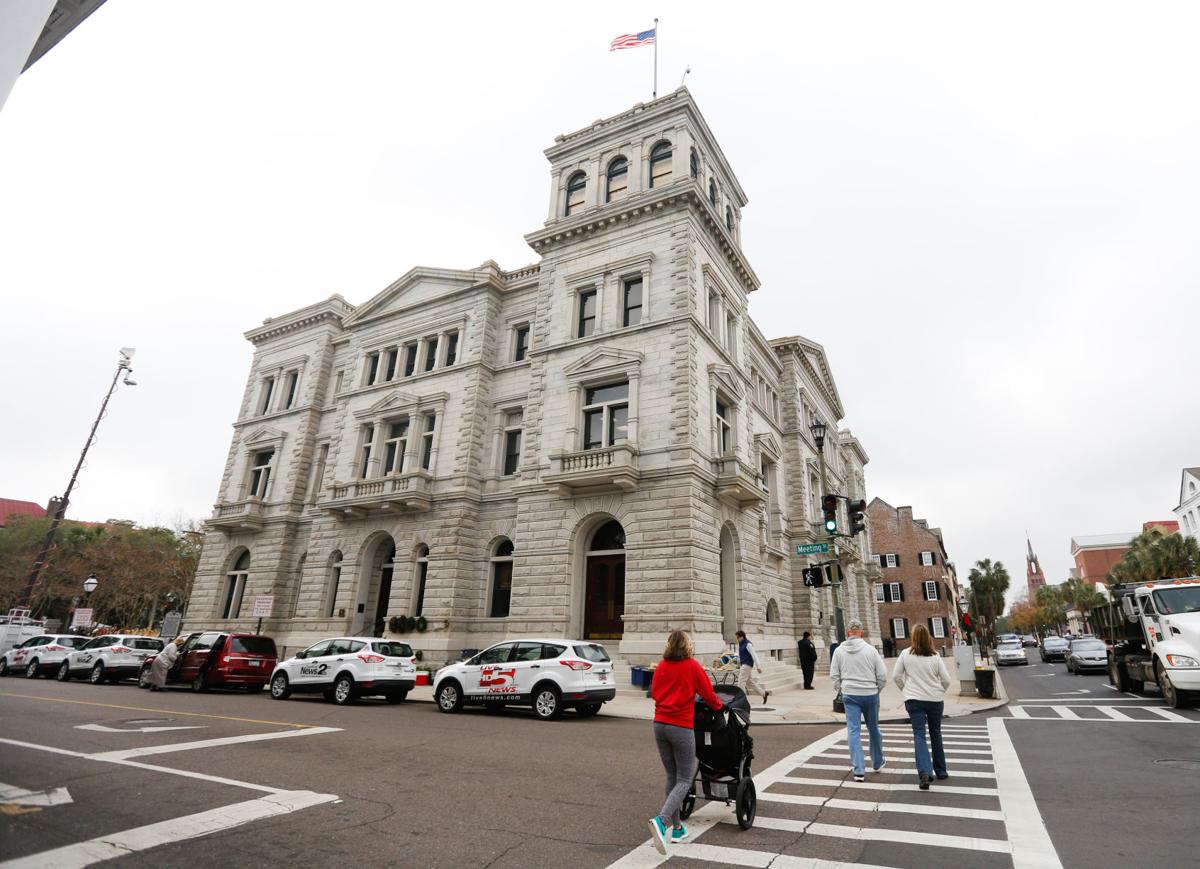 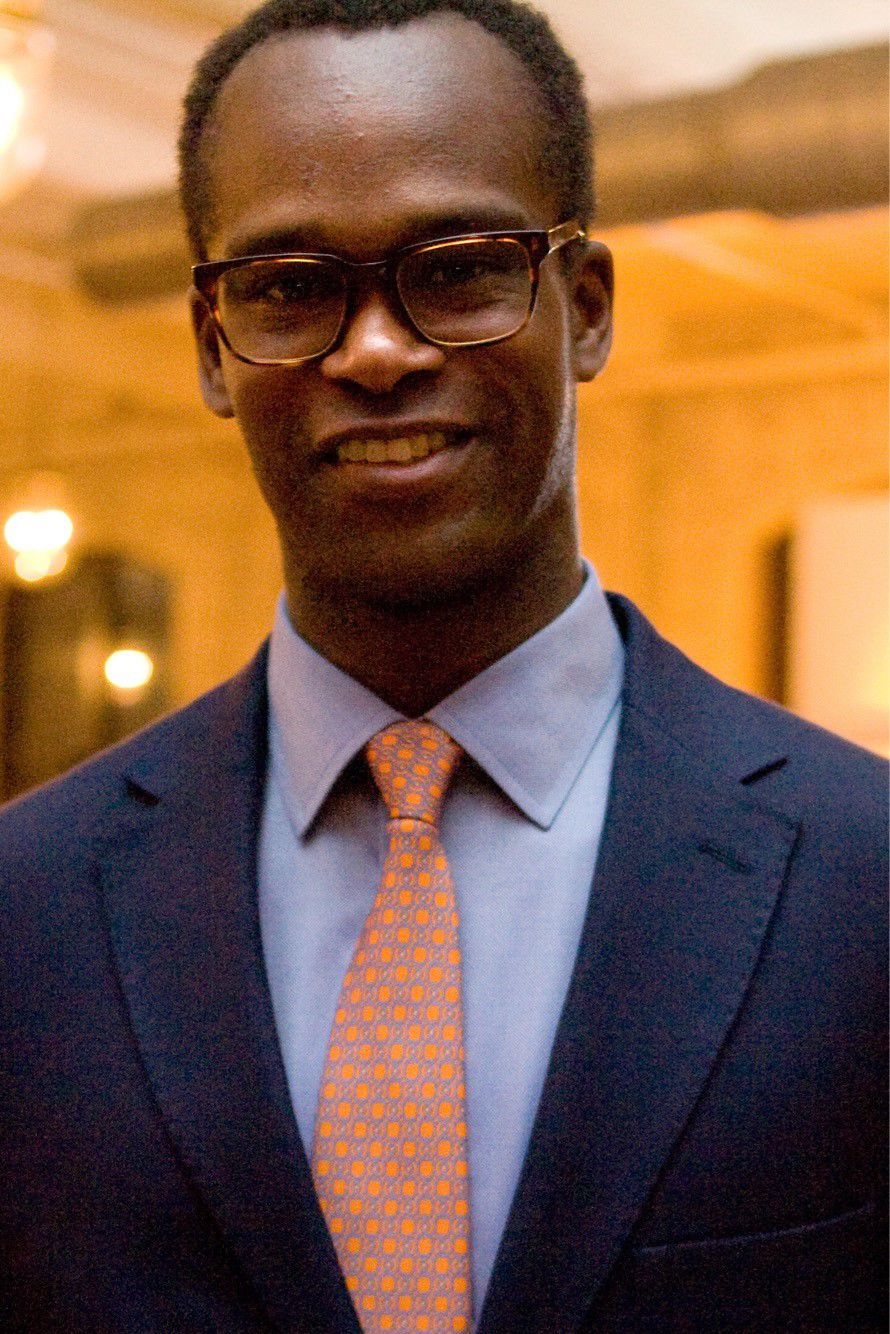 Christopher Bryant sat in his usual seat raised above a federal courtroom last fall when Dylann Roof walked toward a podium before him.

Bryant, a black law clerk for the presiding judge, knew well the racist ideology the self-avowed white supremacist used to explain why he killed nine worshippers at Emanuel AME Church. Long before Roof's federal hate crimes began, Bryant had begun traversing racist websites like Stormfront, studying the ways its users communicated and pondering how deeply they infiltrated the world around him.

Roof's ideology didn't surprise Bryant. But Dylann Roof himself did.

At a closed-door hearing in November to discuss Roof’s mental competency, the young man arrived at a wooden podium waiting front and center before U.S. District Judge Richard Gergel, who is white, and Bryant, the only black attorney in the courtroom. Roof wanted to challenge the findings of a defense expert who had diagnosed him with several mental illnesses and autism spectrum disorder. That expert himself had autism.

When the judge took a break, Bryant and his fellow law clerk headed back to chambers.

“I hope my first cross-examination is as good,” they said, only half joking. Despite his violent and racist ideology, Roof seemed logical, rational, on point.

At the time, Bryant planned to leave Charleston promptly once the trial ended. He had lined up a job in Los Angeles at a prominent law firm with big money and high-profile connections. Truth be told, he'd never loved Charleston.

His ex-wife still lived in town, and her presence served as a reminder of their divorce. Strike one. Then, in 2015, a white North Charleston police officer gunned down a black motorist named Walter Scott during a confrontation that followed a traffic stop. Strike two. Two months later, Roof killed nine black people simply because of their race. Strike three.

Yet witnessing weeks of gut-wrenching testimony, seeing the strength of attorneys' convictions on both sides and grasping the depths of racial divides in Charleston forced him to rethink everything about his future.

Bryant arrived in late summer 2015, just weeks after the church shooting, to begin his final clerkship in a city that once served as the nation's largest slave port. By then he was used to being the only black male in the room, the product of mostly white neighborhoods and public schools in St. Louis where court-ordered desegregation busing remained in place.

His father worked in pharmaceutical and medical device marketing. His mom began her career in electrical engineering, then stayed home with Bryant and his two siblings. They weren’t wealthy. They weren’t poor. They did have the means to live in a nice area and afford their children's extracurriculars.

Bryant, who's now 31, played baseball and excelled at tennis. He found a talent for playing music. He did well in school.

He also became very aware of being black.

Around fourth grade at a camp, a student joked: “What’s a similarity between a (N-word) and an apple? They both look good hanging from trees.”

Tall and athletic by middle school, his baseball team left a game after racial overtones boiled over. Bryant could throw a mean fastball, and he hit a white batter with a pitch. He doesn't recall exactly what the parents on the other team said. He does remember the tension. And leaving early.

A few years later, when his family moved to the Chicago suburbs, someone left a copy of Tupac Shakur’s album “Strictly 4 My N.I.G.G.A.Z.” on their porch.

So Bryant began browsing sites like Stormfront. Were these episodes merely jokes and the results of frayed tempers? Or did they reveal the tip of more hate-filled, pervasive racism all around?

“I like to know what’s out there so things don’t surprise me,” he said.

He went on to Duke University, where he studied economics and became a special education teacher in Durham, N.C.’s high-poverty schools. Yet he made less money in one year teaching than he later earned working 10 weeks at a law firm. If he had kids one day, how would he provide what his parents gave him?

He returned to Duke, this time for law school, eventually becoming the first black editor in chief of the Duke Law Journal.

Along his legal ascent, a justice on the 4th U.S. Circuit Court of Appeals based in Virginia called a friend, a federal judge down in Charleston named Richard Gergel.

“You need to get your hands on Chris Bryant," Justice James A. Wynn Jr. suggested.

By then, Bryant had become the most sought-after black law school graduate in the country, Gergel recalled.

Bryant soon clerked for Wynn on the 4th Circuit. Then he arrived in Charleston.

Along the path to his office in Charleston's federal courthouse, Bryant walked past sweetgrass basket weavers selling handcrafted art whose tradition stretched back to slaves brought from West Africa. He saw black neighborhoods, mostly poor, flanked by encroaching and increasingly swanky ones, mostly white. He toured a plantation where, until recently, the descendants of former slaves still toiled.

And he heard the words of forgiveness spoken by several families of Roof’s victims. As a narrative of forgiveness dominated news coverage of the shooting well into Roof's trial, Bryant wondered why. It didn’t reflect the range of feelings he heard from victims’ loved ones who spoke.

Many said they hoped Roof would burn in hell. Most applauded his death sentence. One grieving father told Roof, "I wish they would enact another law to cut a limb every time you try to appeal."

Perhaps the forgiveness narrative stuck instead, Bryant thought, because it let people off the hook of making uncomfortable changes. He also thought it left blacks appearing placated after a racially motivated massacre.

“Forgiveness is an interesting concept. There are people who say, ‘I forgive you,’ and that's more of like I am at peace where I am with you with God,” Bryant said. “But it’s also part and parcel of sort of a plantation mentality that I think is here.”

One day he was walking along Calhoun Street, named for a former vice president and prominent defender of slavery, when a drunk man yelled, “Hey, it’s Tiger Woods!” Bryant was wearing a polo shirt and preppy shorts. He does not look like Tiger Woods. But he had learned to dress well and present well at all times.

“Unless I’m running or asleep or maybe playing tennis, no one in Charleston is going to see me without a collared shirt on,” Bryant said. “It’s intentional.”

He searched for other black professionals living on the peninsula but didn’t find many. Many of the most talented African-Americans he’d met along his life’s path who hailed from the state had left for places like Atlanta, Charlotte, New York or Washington, D.C.

He, too, continued making plans to leave.

During Roof’s trial, Gergel’s team worked grueling hours, including weekends and holidays from October through the trial's end in January.

Eunice Ravenel-Bright, the courtroom deputy, noticed how hard Bryant toiled on all of their cases.

“Christopher was a joy to work with,” she said.

When the trial ended, Bryant tried not to think about the enormity of deaths and grief, nor the reality of the racism involved. Yet the doubts crept in.

“It was impossible to watch it all and not want to be a better person," he recalled.

One day, he sat down and made a list. Exactly how much money would he need to pay off his law school debts and keep the lights on? He thought of the L.A. firm he was set to begin work at. Big names. Big cases. Big money. Big profile. Big city.

“In terms of being a law nerd and prestige, it was a great opportunity to go work there. But in terms of, 'What good am I doing?' I felt like the answer was less," he said.

Next, he listed needs like intellectual challenge and how his practice of the law could affect important changes.

Then, randomly on a legal website, he spotted an advertisement seeking a new attorney at Yarborough Applegate in Charleston. He reached out. It was a plaintiffs’ law firm, one that initiates lawsuits including personal injury, wrongful death and product liability cases.

“Government can’t go out and police everything, but if there are unsafe things that have hurt or are hurting the little guy, you go out and fix it," Bryant said. "And sometimes it’s going after the government and fixing things. That gave me a sense of purpose."

He mentioned the Charleston job prospect to his father.

“Will you be able to pay all of your bills if you take the job?” he recalled his dad asking.

“Will you eat Ramen every night?”

“Well, you have your whole life to make money. Where do you think you can do the most good?”

Bryant sent a letter to the law firm in Los Angeles. And took the job at Yarborough Applegate.

Law firm partners David Yarborough and William Applegate celebrated. They'd wanted to hire a top lawyer from a top law school with federal clerkship experience "with hopes that such a person would excel at critical thinking and analysis and be a brilliant legal writer."

Today, Bryant's clients are real people who need help. He also serves on the board of Charleston Legal Access, a nonprofit law firm representing clients who can’t afford to pay standard attorneys’ rates.

“He’s very devoted to the community and community service,” Gergel said. “He’s someone who will be a major personality in this town and this state.”

Where will Bryant go from here? He’s tackling new cases. And he’s particularly interested in public school quality and accessible transportation, especially for those who depend on it. He jokes that he’s not running for office, however. Not yet.