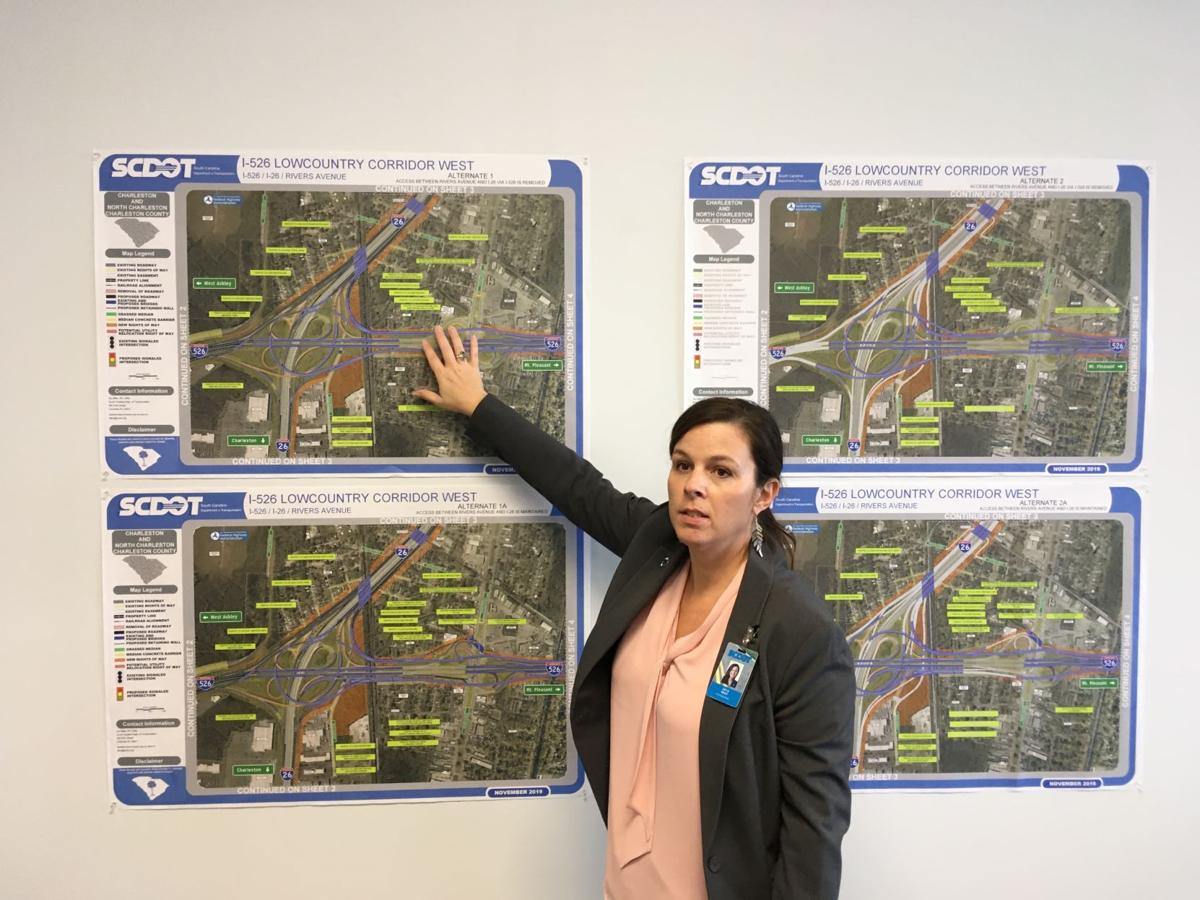 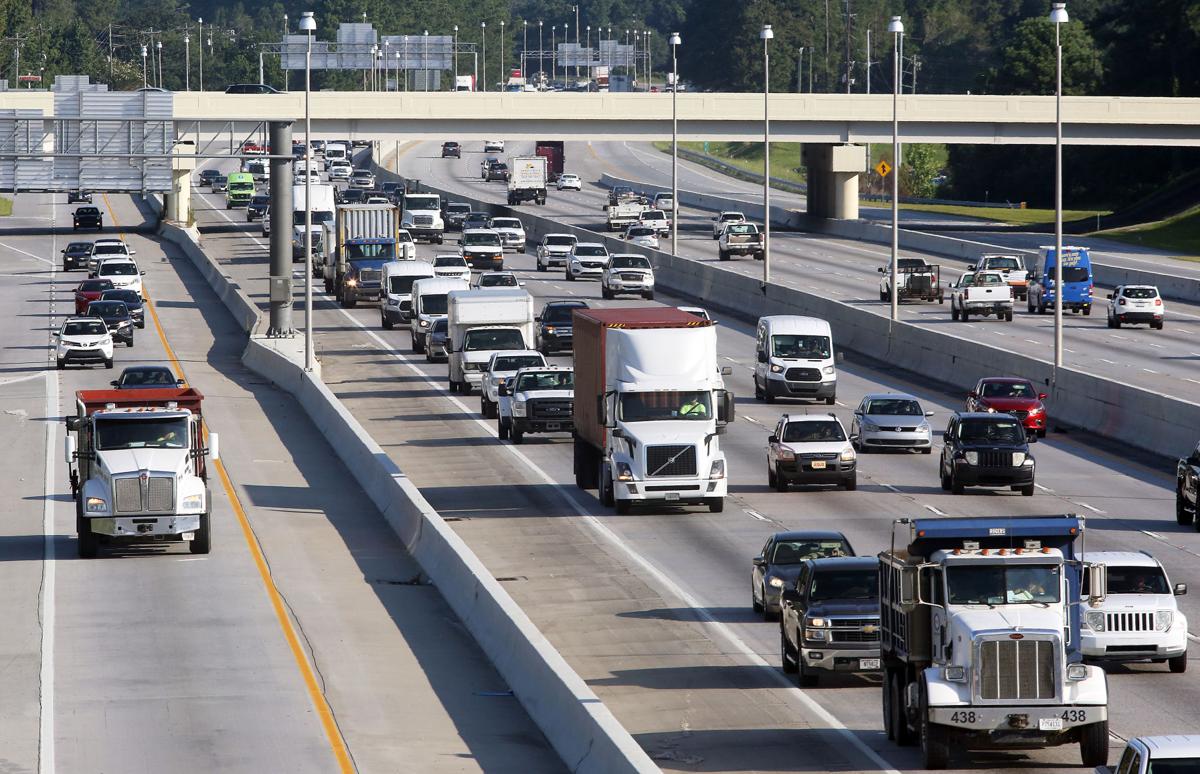 Tractor-trailer rigs and morning commuters make their way down I-26 to the I-526 exit Wednesday morning, August 7, 2019. The South Carolina Department of Transportation has proposed the future $1.1 billion expansion and realignment of interstates I-26 and I-526 at the interchange. The project will impact the Highland Terrace community and other communities near the interstates. File/Brad Nettles/Staff

The Gen. William C. Westmoreland Bridge, connecting West Ashley to North Charleston, would be widened by building new bridges connected to the sides of the existing ones, as part of plans to widen Interstate 526. Provided/SCDOT

Interstate 26, north of the Interstate 526 interchange in North Charleston would be widened as part of the Lowcountry Corridor West project. Provided/SCDOT

Tractor-trailer rigs and morning commuters make their way down I-26 to the I-526 exit Wednesday morning, August 7, 2019. The South Carolina Department of Transportation has proposed the future $1.1 billion expansion and realignment of interstates I-26 and I-526 at the interchange. The project will impact the Highland Terrace community and other communities near the interstates. File/Brad Nettles/Staff

It will cost an estimated $1.1 billion, require about 115 households to relocate, impact businesses, and turn some of the busiest highways in the Charleston area into a construction zone for years.

It's the Lowcountry Corridor West project, which aims to improve Interstate 526, all interchanges from Paul Cantrell Boulevard in West Ashley through North Charleston to the Cooper River, and a portion of Interstate 26.

The project is so large, expensive and disruptive that the S.C. Department of Transportation has opened an office in North Charleston to meet with residents, has scheduled six more public meetings — the first is Saturday — created a community advisory group, developed online presentations, and is using billboards to publicize the project website, 526LowcountryCorridor.com.

"The impacts to the communities are significant in this project,"  said DOT Project Manager Joy Riley. "There's a lot of fear."

Four North Charleston communities near the interchange of the two interstate highways will see the most impact: Liberty Hill, Highland Terrace, Russelldale and Ferndale. Some homes near I-526 in West Ashley could also be purchased by the state.

"Nobody really has insight yet," said Russelldale resident Tony Grasso, a member of the community advisory group. "Saturday is the big day."

Russelldale is the location of the first community drop-in meeting. Four will be held in North Charleston because that's where the largest impacts will be seen on residential communities.

So many North Charleston residents will need to be relocated for the road project that the state is considering building new housing so that the displaced can remain in their communities, Riley said.

"The number of relocations we have — the market just can't absorb them all," Riley said. "Our goal, at the end of the day, is to make people whole through the right-of-way process."

$1.1 billion plan for interstates 526 and 26 will claim many North Charleston homes

The reason for all the cost and disruption is that the interstate is expected to become horribly congested in the coming years without changes. Two alternatives are being evaluated for the main project, and four for the I-526/I-26 interchange.

Both call for I-526 to be widened to eight lanes, the huge interchange with I-26 would be redesigned, and other interchanges in West Ashley and North Charleston would be reworked along with connecting roads.

In West Ashley near the I-526 interchange at Paul Cantrell, an overpass is planned at the Magwood Road intersection, which now tends to back traffic up onto the interstate. In North Charleston the connections to I-526 at North Rhett and Virginia avenues would be redesigned.

Portions of I-26 will also be widened, near the connection with I-526.

The project is the largest of many road plans in the Charleston area aimed at relieving traffic congestion that's been driven by the area's rapid population growth, and the fact that most commuters drive to work alone.

Riley said that after public meetings the state will work to select a plan, known as a preferred alternative, by about this time next year. That plan will go through federal review, the road project could be put out to bid in 2023, and it could be completed by 2028.

But, work will continue on the remainder of I-526 — the "Lowcountry Corridor East" project, from North Charleston across Daniel Island to the end of the interstate in Mount Pleasant.

The main public meeting, an all day event, will be held Nov. 21 from 11 a.m. to 7 p.m. at the Charleston Area Convention Center, 5000 Coliseum Drive, North Charleston.

Leading up to that meeting the S.C. Department of Transportation has scheduled five community drop-in meetings so that people can meet with team members and ask questions. Those meetings are:

In addition, DOT has opened an office in North Charleston were residents can drop in, look at presentations and ask questions of project officials.

Letters to the Editor: Attainable housing is vital to Mount Pleasant

The growth of our community has picked up its pace over the last several years. Every day we hear of new people moving to the Charleston area,…

Clutching maps and project pamphlets, Ronald Porter Jr. understands the region's grave traffic problems. But he didn't have many words as he processed the fact that his elderly mother may have to find somewhere else to live in the coming years.

Motorists can expect temporary lane closures on the Arthur Ravenel Jr. Bridge and Wando River bridge over the weekend.