MONCKS CORNER — The Berkeley County School District purchased 36 acres of land in the Carnes Crossroads development as the site of a new K-8 school, which the district hopes will help ease overcrowding in Cane Bay schools.

The district finalized a deal to buy the land off of U.S. Highway 176 near the Roper St. Francis Berkeley Hospital for $2.03 million on March 12. The district hopes to break ground this fall and open the school for the 2023-24 academic year.

Berkeley County has seen explosive growth in its population — more than 30 percent — over the last decade. The district has grown by about 1,000 students each year for the past several years, and the Cane Bay community is at the center of the most pronounced growth.

Several district officials said earlier this year that a new school would have to be built each year for the foreseeable future to keep up with growth.

The new school is expected to accommodate between 800 and 1,000 students.

“Without question we needed a school in the Cane Bay area,” school board member Michael Ramsey said. “There’s been a tremendous amount of growth around Cane Bay and Carnes Crossroads, so we definitely needed it.”

As part of the deal, an impact fee of about $1,850 per new home will be paid to the school district to help with construction of the new school.

“Normally, we fight impact fees; they are seen as a bad thing. But we thought this was a huge positive,” Sloan said. “There’s no better way to anchor a community than with a quality school.”

The Berkeley County School District purchased 36 acres of land in the Carnes Crossroads development as the site of a new K-8 school. 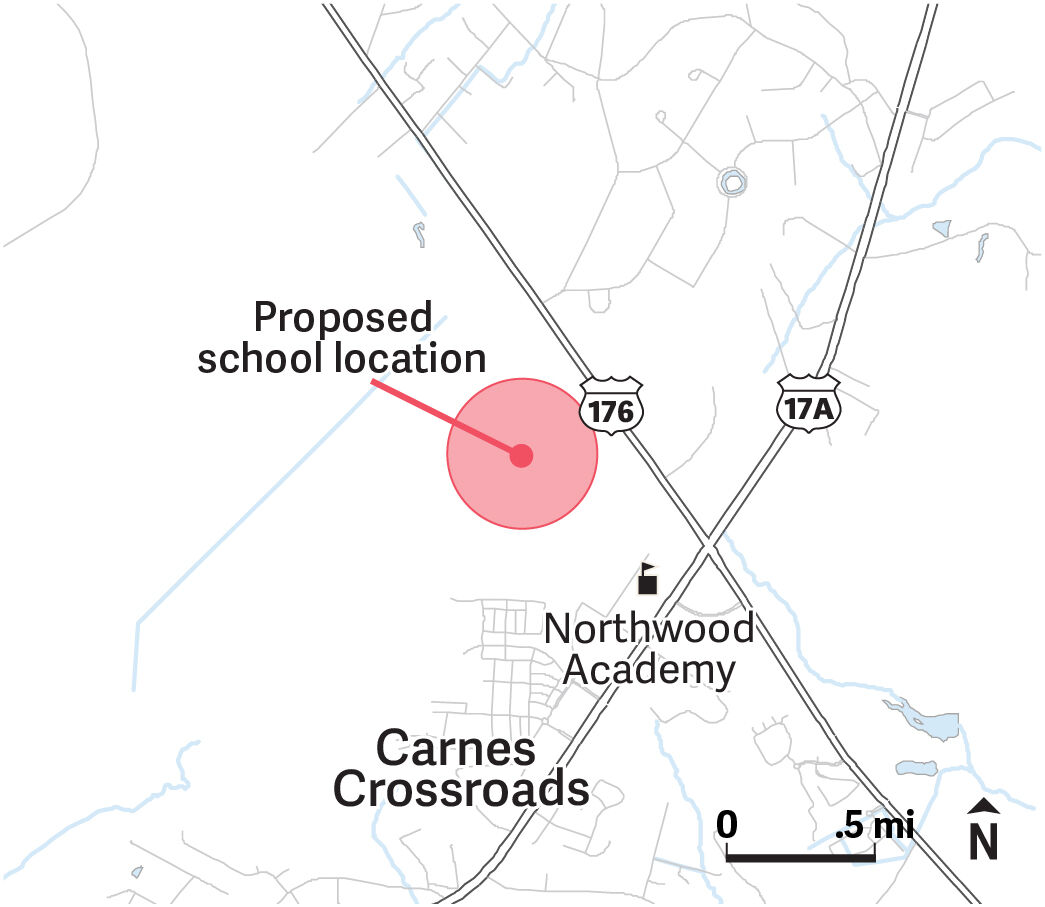 Without the impact fee, Ramsey said he wasn't sure if the district would have been able to purchase the land.

“The district got a really good deal on the land and having a partnership with the developer has really helped,” Ramsey said. “The Daniel Island Development Company understand the importance of the value of a new school.”

Ramsey said he hopes the deal motivates other developers in the area to work with the district on future schools.

“Some other developers have not been as willing to come to the table and negotiate with the district,” Ramsey said. “We’re not going to give away the farm to get a new school. The developers in Nexton and Cane Bay have to understand that we’re going to put schools where they make the most sense.”

Berkeley County the only SC school district without a mask mandate. Some are pushing back.

The megadevelopments such as Cane Bay, Carnes Crossroads and Nexton are one of the major reasons why Cane Bay schools have become overcrowded. The district estimates that around one-third of teachers at Cane Bay Middle School do not have their own classroom space, and instead “float” throughout the building.

"A new school is welcome news," said Goose Creek Councilwoman Hannah Cox. "There's so much overcrowding in those schools that this, hopefully, will help ease some of that overcrowding."