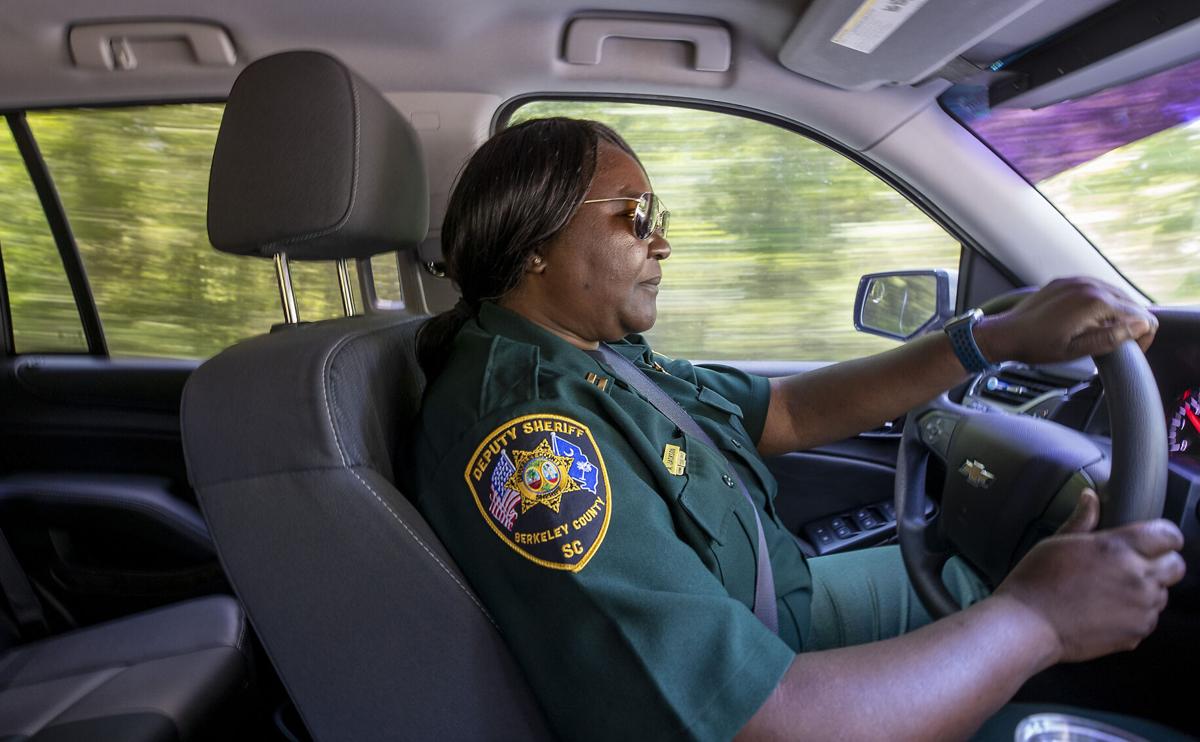 Captain Annie Jackson with the Berkeley County Sheriff’s Office covers the miles in her car as she patrols the communities around Lake Moultrie on May 20, 2021. Grace Beahm Alford/Staff 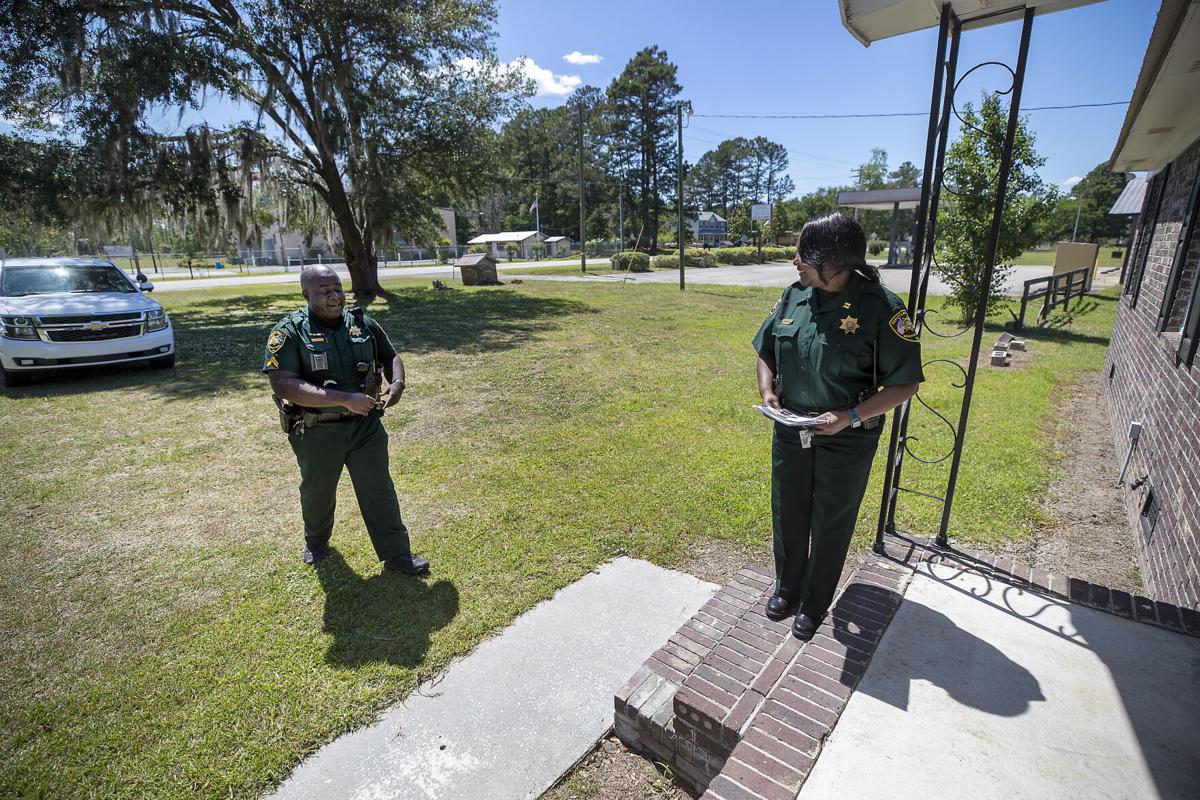 Captain Annie Jackson greets Officer Jimmy Smith at the Berkeley County Sheriff’s Office substation in Alvin on May 20, 2021. The substations allow officers an office for writing reports without having to travel the miles back to the main office in Moncks Corner. Grace Beahm Alford/Staff 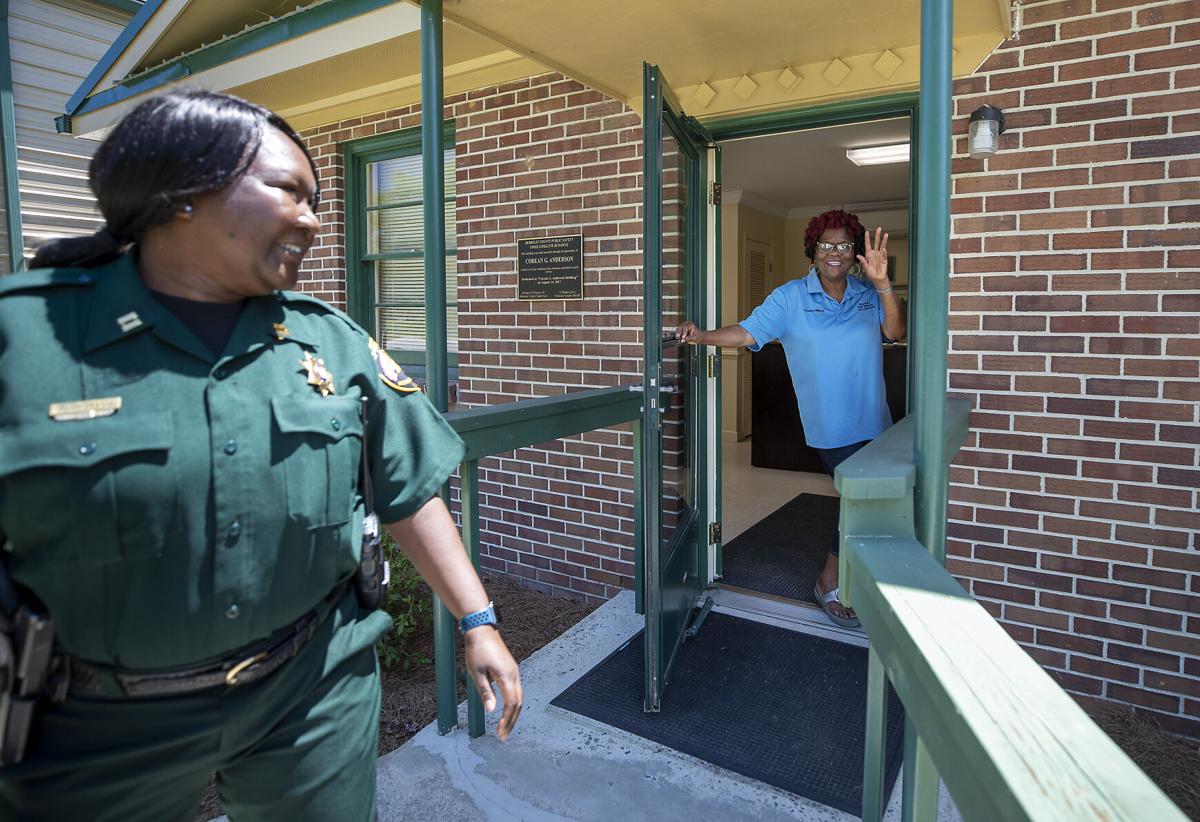 Yvonne Wilson, a volunteer at the Cross substation, works with Captain Annie Jackson with the Berkeley County Sheriff’s Office as she patrols the communities around Lake Moultrie on May 20, 2021. Grace Beahm Alford/Staff 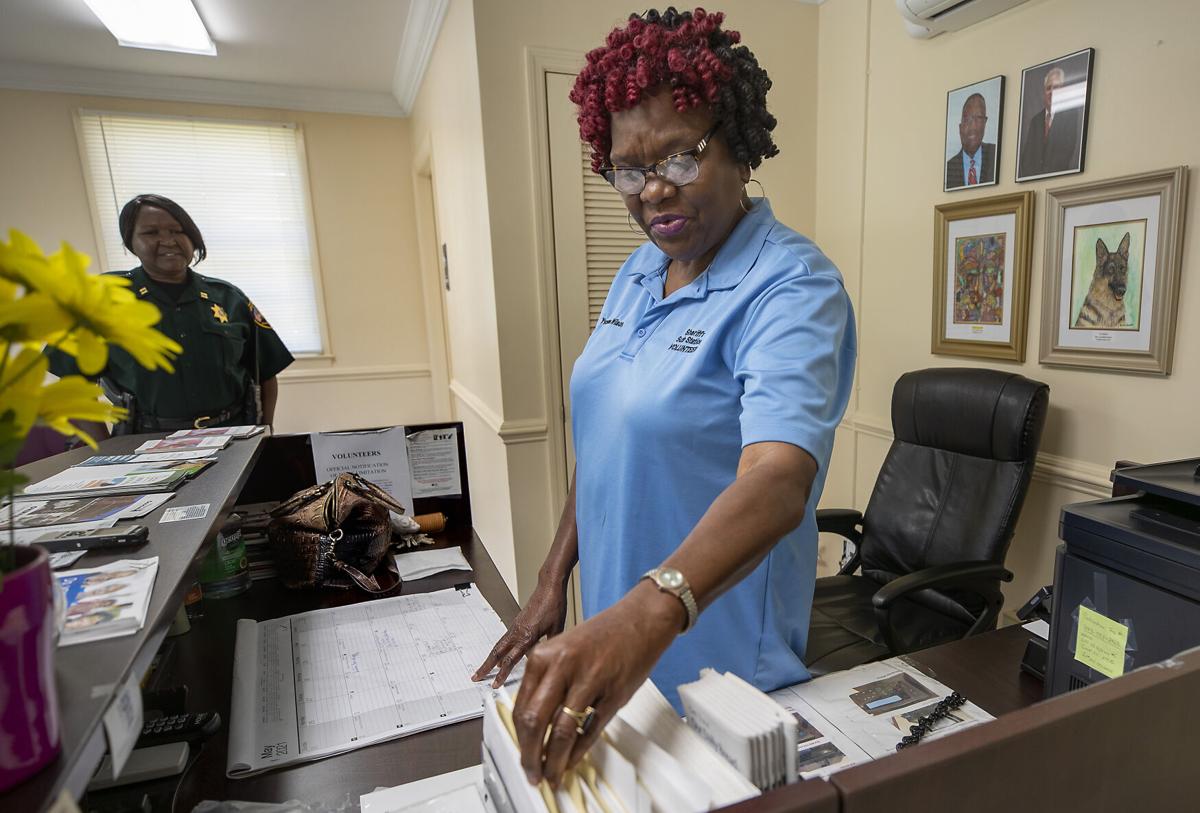 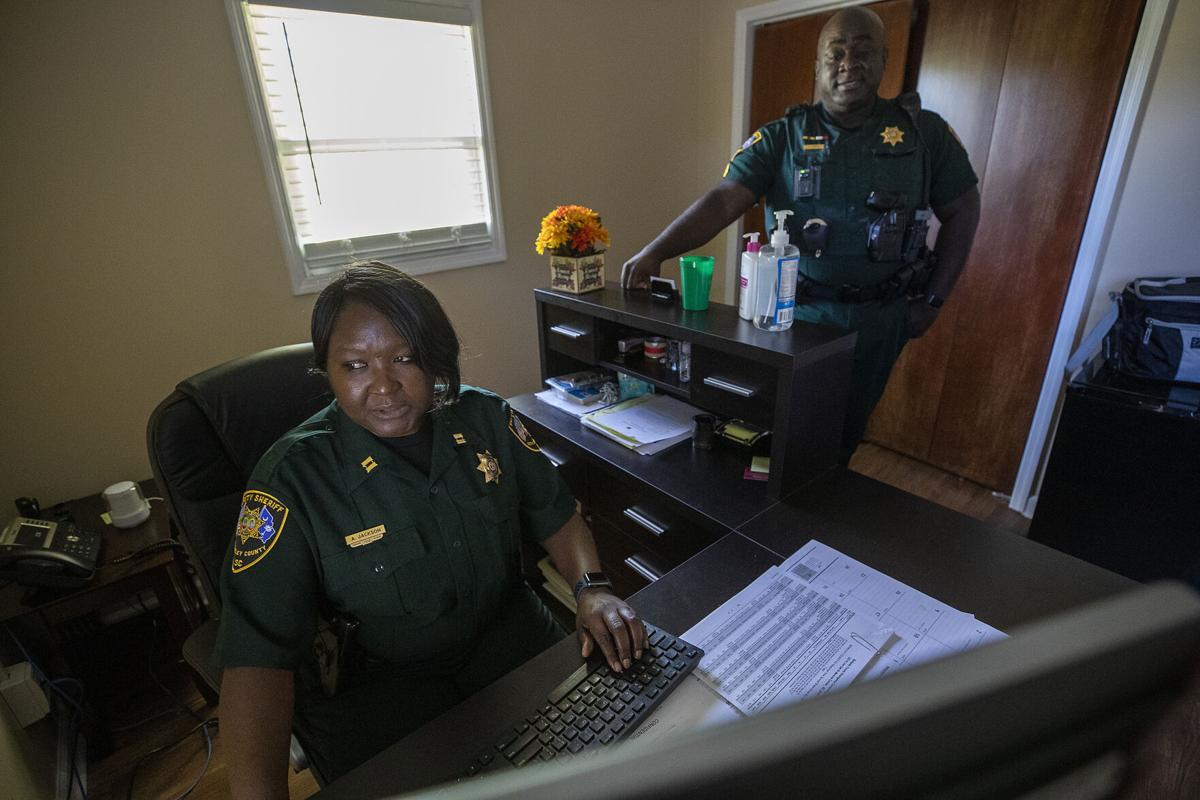 Captain Annie Jackson and Officer Jimmy Smith Berkeley County Sheriff’s Office write up a report in the Sheriff’s substation in Alvin on May 20, 2021. The substations allow officers an office for writing reports without having to travel the miles back to the main office in Moncks Corner. Grace Beahm Alford/Staff

CROSS — In the past decade, an average of 17 people a day have moved into Berkeley County.

It's stretched the county’s resources, infrastructure, schools and government services to its limits.

Nowhere has that burden been felt more than with emergency services, especially in law enforcement, where the number of 911 calls has more than doubled in the past decade.

Combine that with the sheer size of the county — at 1,230 square miles it’s the largest county in the state and nearly as big as the state of Delaware — and Berkeley County Sheriff Duane Lewis knew his approach to policing had to change.

In the past, deputies were split into six zones around the county, approaching it as one entire area.

In March, Lewis adopted a new strategy of dividing the county into North and South districts and generating new schedule shifts for all its deputies.

The new system not only splits deputies into North and South sections, but further divides them into sub sectors, with deputies stationed at any one of the five recently created substations — Cross, Alvin, Red Bank Road in Goose Creek, Cainhoy/Huger and Cane Bay.

The new district plan has doubled the number of deputies working at any time during the day to allow the department to respond to calls faster.

“There are times when it seems like an impossible job, because of all the new developments and the size of the county,” Lewis, who was elected in 2015, said.

The Lake and Volunteers

While it seems like there’s a new development popping up in the county nearly every week, a vast majority of the area is still home to small, family farms and wide-open spaces, especially around Lake Moultrie.

Patrolling an area so vast and that has seen call volumes grow by nearly 65 percent in the last five years has its challenges.

In the past, it could take as long as 20 minutes for a county deputy to make the 16-mile trek up S.C. Highway 6 from Moncks Corner to Cross. Add another 10 minutes for going to Pineville.

The biggest geographic obstacle getting too Cross and Pineville is Lake Moultrie, the man-made 60,000-acre body of water, which was created in the 1940s when the Cooper River was dammed.

“There’s just no easy way to get from Moncks Corner to some of those rural areas in the county,” said Sheriff Cpt. Annie Jackson, who leads the North District and is a 21-year veteran on the force. “You have to go around the lake to get there from Moncks Corner.”

In 2017, the department established its first two substations in Cross and Cainhoy. The department added another substation in Alvin in 2019. The substations were staffed by community volunteers along with deputies that would no longer be based out of Moncks Corner, but in the substations themselves.

The idea was twofold, to cut down on response times for emergency calls and to help the deputies with routine complaints and concerns from area residents.

“The response times have been almost cut in half since we established the substations,” said Jackson, who grew up in Cross, but is headquartered in the Alvin substation. “Since the deputies work out of the substations, the community has gotten more familiar with them and its help in fighting crime.”

Yvonne Wilson retired in 2019 after working 44 years as an administrative assistant for the Berkeley County School District. As a life-long Cross resident, Wilson wanted to help the local law enforcement and became a volunteer at the town's substation.

Two or three days a week, Wilson works a four-hour afternoon shift, taking calls and filing reports that she passes along to deputies. Most are routine complaints about speeding or teenagers riding dirt bikes where they shouldn’t or maybe even to help find a lost dog.

“I fill out the paperwork and a lot of times I’ll have a deputy go out and follow up,” Wilson said. “There are not a lot of calls, but that one call I get is exceptionally important to me because I am helping that one person with their problem.”

Yvonne Bradley, who worked as a middle school teacher in downtown Charleston for more than two decades, helps out as well as a volunteer.

“Trespassing, evictions, disputes between family members, we get a lot of calls like that,” Bradley said.

Having local residents like Wilson and Bradley working in the substations has helped bolster trust between the community and law enforcement.

“I think they see a familiar face, someone that looks like them and they probably open up more,” Wilson said. “They feel more comfortable with us. They don’t have to drive all the way to Moncks Corner. I know sometimes when they call down to the main office, they get transferred around and they probably feel like no one cares. They know we care.”

The volunteers also add a layer between the community and the sheriff’s department, freeing up the deputies to focus on more pressing issues.

“Having the volunteers saves the deputies time and the department resources that can be best used where it’s needed most,” Jackson said.

Lewis said the community volunteers are crucial to the success of the substations.

Getting the rural community around the lake regions more involved as been a strategy championed by county councilman Caldwell Pickney for years.

“The community has ownership in the law enforcement,” Pickney said. “They know that there’s someone out there that will listen to them.”

Aime Wadford, who lives in Alvin, said the substations have made the sheriff’s department more approachable.

“Instead of bothering a deputy or a dispatcher for a non-emergency matter you can go the substation and they will take care of it,” Wadford said.

The rural areas are only part of the issue that Lewis and his deputies are facing.

Despite one man's fight, Cainhoy's 'Meeting Tree' comes down

A drive from Moncks Corner to Cainhoy or Huger could take an hour depending on traffic.

Unlike Moncks Corner, Goose Creek and Hanahan, which have their own police forces, the new developments like Cane Bay, Nexton and Cainhoy Plantation rely solely on the sheriff’s department for law enforcement.

“Just because they have a Summerville or Goose Creek address doesn’t mean they live in a municipality,” Lewis said. “Those unincorporated areas fall under our jurisdiction. That’s a big part of the story for us. All this rapid growth and development in the county is a major reason why we divided up the county into north and south sectors.”

As part of the new strategy, county council has agreed to add 24 more deputies – eight per year – to the department over the next three years. Lewis said the new deputies will be placed where the department has received the most calls.

“There are a lot of departments that talk about community policing,” Lewis said. “But they just mean they go out and talk with folks. We are living in the communities. We have a physical presence there and I think that’s what works best in our county.”