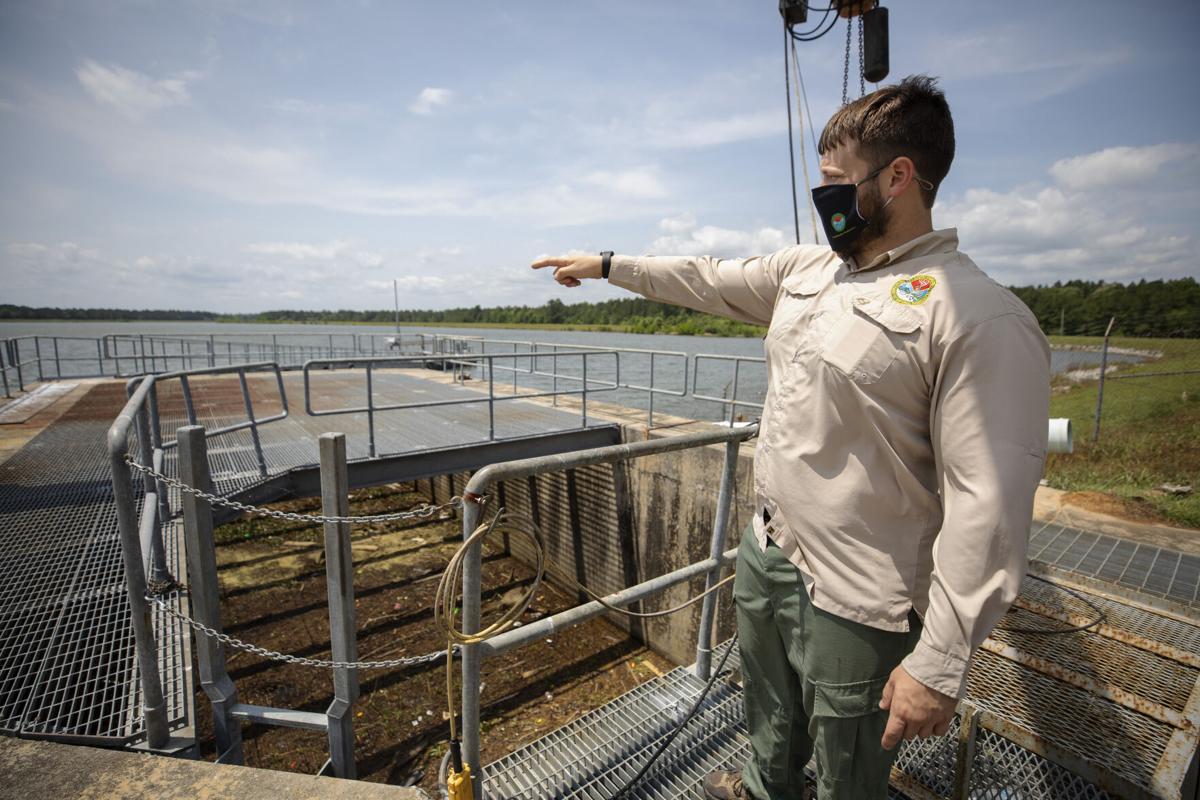 Kyle Hoffman, rediversion project manager of the diadromous fish section for the South Carolina Department of Natural Resources, points to the upstream exit of the St. Stephen fish lift on Thursday, April 29, 2021. The fish lift allows migratory fish like American shad and blueback herring to safely move upstream from the Santee River to Lakes Moultrie and Marion. Lauren Petracca/Staff 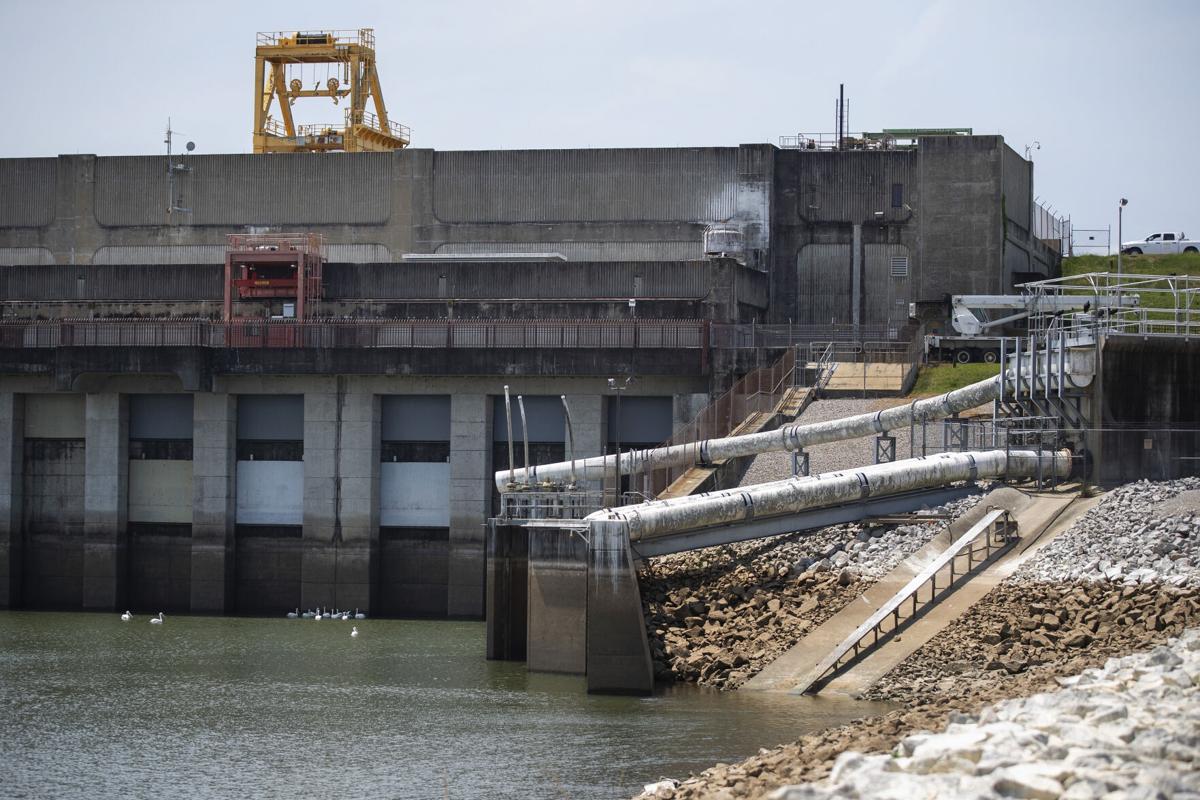 The fish lift is pictured on an end of the St. Stephen Powerhouse on the Rediversion Canal in Berkeley County on Thursday, April 29, 2021. The fish lift allows migratory fish like American shad and blueback herring to safely move upstream from the Santee River to Lakes Moultrie and Marion. Lauren Petracca/Staff 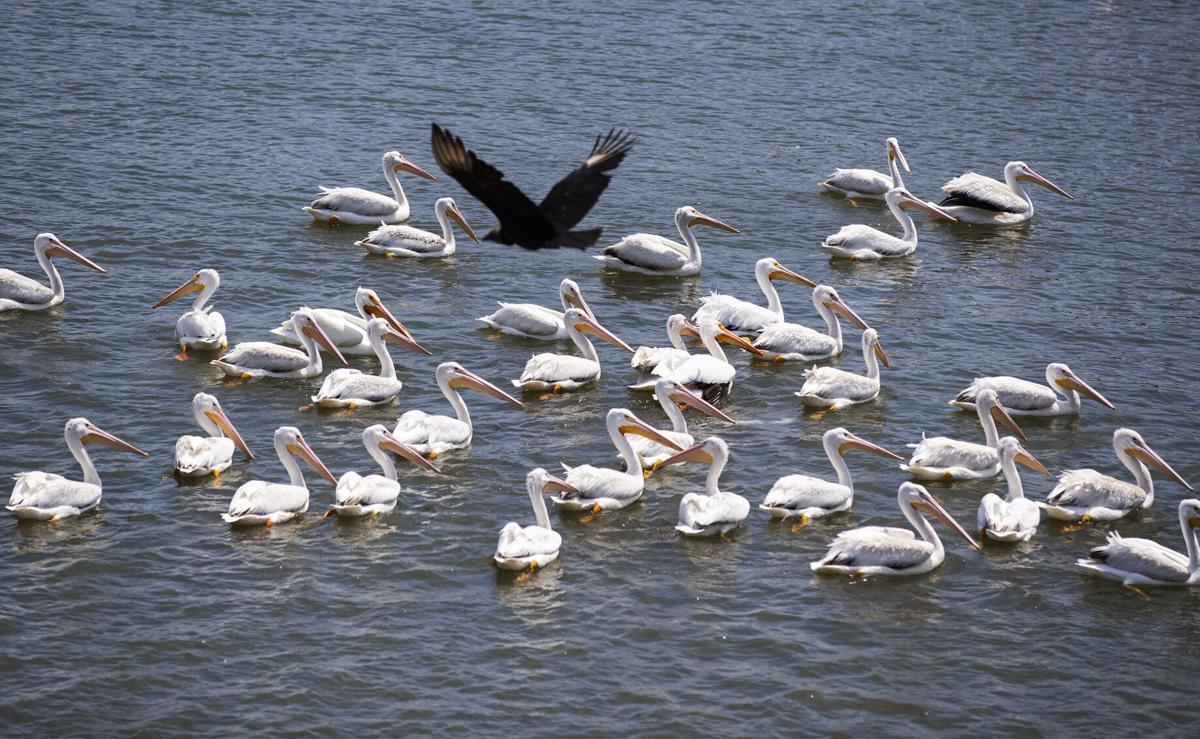 A vulture flies past a group of pelicans waiting for fish at the base of the fish lift at the St. Stephen dam on Thursday, April 29, 2021. Lauren Petracca/Staff 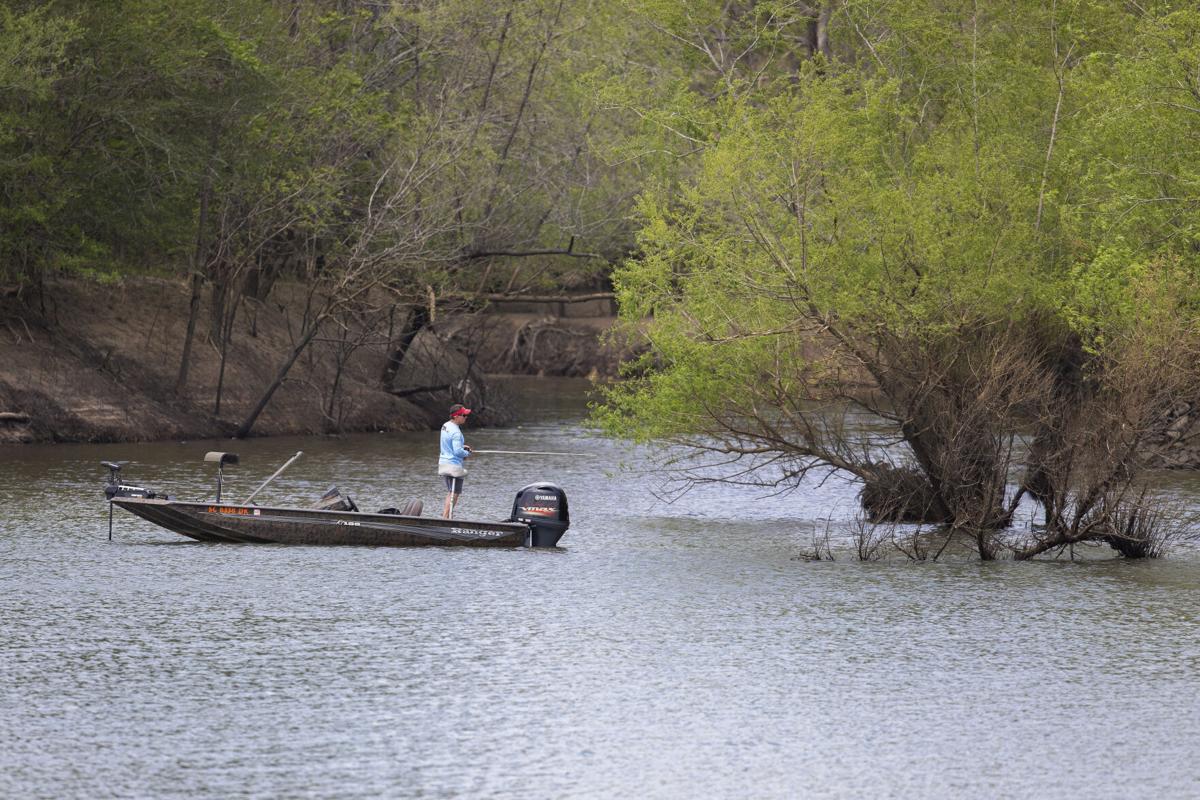 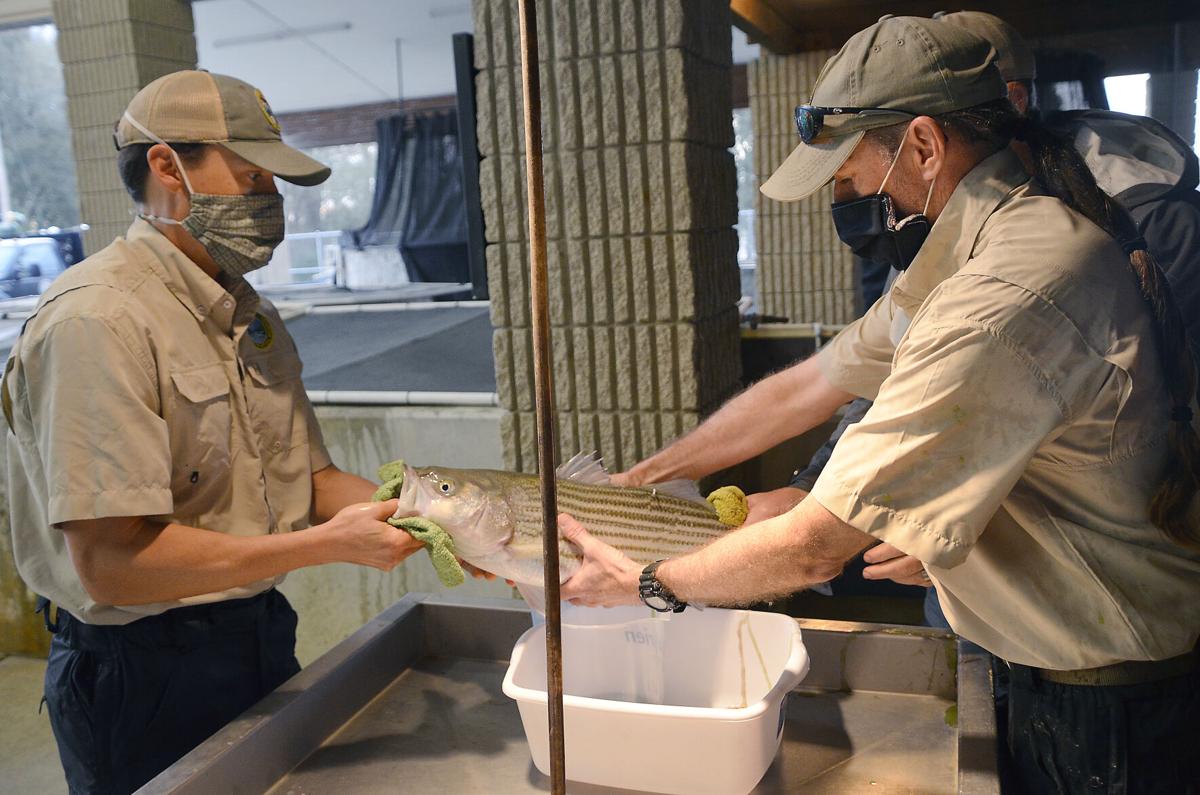 Jared Breaux (left) and Jarrett Gibbons take measurements of a striped bass that was taken from the fish lift at St. Stephen. SCDNR/Provided

ST. STEPHEN — The fish lift in this town passes more American shad and blueback herring than any other passage structure on the Atlantic Coast.

During a typical year, the 75-foot fish lift passes more than 400,000 American shad, 350,000 blueback herring, plus striped bass, catfish, panfish and other aquatic species into Lakes Marion and Moultrie.

During the busiest time of year — from early February to the beginning of May — more than 10,000 fish can pass through the lift in an hour.

The American shad and blueback herring are “anadromous,” which are fish that are born in freshwater but spend most of their lives in saltwater only to return to freshwater to spawn.

The St. Stephen fish lift is critical to their survival. The lift provides the fish a path from the ocean to their freshwater spawning grounds.

Each spring the fish make their migration runs up the rivers in search of suitable spawning habitat. Biologists have found that blueback herring and American shad that spawned in the Santee and Cooper rivers system can migrate more than 1,000 miles to the Bay of Fundy in Nova Scotia, Canada.

Biologists are still puzzled by the fish’s innate ability to return to their spawning grounds. It is believed that the young fish actually memorize a particular smell or taste of the river and they use this to guide them to their original spawning habitat.

“That’s the most common theory,” Hoffman said. “No one is exactly sure why they do it, but we believe it has something to do with smell or taste. The fish just recognize that particular smell and know that’s their natal water system.”

The fish are forced to travel more than 100 miles from the Atlantic up freshwater rivers to reach their spawning grounds. They’ve evolved the ability to navigate rapids and other natural obstructions. Man-made obstructions, however, such as dams can completely block access to the spawning grounds.

In these instances, a human-made passageway, called a fishway, is constructed so fish may pass around the obstacles.

There are several different designs to pass fish around dams, such as fish ladders, fish lifts and navigation locks. In the Santee/Cooper system, a fish lift and a navigation lock (favored by boaters) are used by migrating fish to pass from the Santee and Cooper rivers into the lakes and rivers beyond.

“It’s a compromise,” Hoffman said. “There’s a balance between the energy demands, the business interest and the wildlife. The fish need to move inland to spawn, and because of the dam we’ve cut down on their access to their spawning areas.”

The water of the Santee and Cooper rivers had been engineered long before the first Europeans settled the area. Archeologist have found artifacts around St. Stephen that date back 8,000 years to the early Archaic period.

Native Americans used weirs — small damlike structures that caused water to pool behind them — to take advantage of the abundant fish in the rivers.

When Europeans first settled the region, the rivers were diked and flooded to produce rice fields. The financial success of the rice crop gave rise to many plantations.

In 1800, a newly constructed 22-mile-long, 10-lock canal connected the Santee and Cooper rivers. This canal allowed goods from the plantations to be delivered from the midlands to Charleston on barges drawn by horses or mules.

The most significant change to the two rivers occurred in 1941, when the Santee River was dammed, and Lake Moultrie and Lake Marion were created. Over 42 miles of dams and dikes were built. At the time of construction, it was the most extensive land-clearing project in U.S. history at approximately 175,000 acres, with most of the clearing being done by hand.

The goal of this “diversion” project was to provide hydroelectric power to rural Lowcountry residents and created what is now the state-owned Santee Cooper water and utility company.

The lift at St. Stephen allows the fish to access their spawning and nursery natal waters.

When St. Stephen's three turbines are operating at full capacity, a large amount of turbulence is created in the Tailrace Canal. The canal is part of the fishway that connects the ocean to the interior rivers and lakes.

As the fish migrate upstream, they're attracted to the downstream flow at the entrance to the gates of the lift. The fish pass through another gate, known as a fish crowder. These gates close and the crowder moves forward, forcing the fish into the lock chamber.

The lock then floods, and a basket forces the fish up to lake level. From there the fish are released into an upper canal and it’s a 2-mile swim to Lake Moultrie.

“During the high season, we operate the lift every 15 to 30 minutes,” Hoffman said. “The whole system can reset itself in about 15 minutes.”

When the turbines are running at full capacity, they discharge 25,000 cubic feet of water per second — enough water to fill the reflecting pool at the Lincoln Memorial in Washington, D.C., in less than 2 minutes.

“When all the turbines are going and everything is cranking, it’s a pretty impressive sight,” Hoffman said.

However, the turbulence created by the turbines was impacting the ability of the fish to locate the fish lift entrance.

In the mid-1980s, to reduce turbulence in the fish lift entry, engineers designed and installed precast concrete walls (wingwalls) and entry gates called weirs. These additions created a more natural river flow that is attractive to migrating fish.

In 2011, the fish lift suffered a catastrophic failure of the hydraulic system, which caused the loss of most of the passage season. The following year, the U.S. Army Corps of Engineers spent nearly $2 million to replace the hydraulic system and crowder gates and repair and refurbish several other gates.

The 2020 spawning season has been an average year, Hoffman said.

While the final count of fish won’t be completed for months, it has been a wet, warm winter and early spring. Those factors usually determined the number of fish that migrate to the lakes and rivers.

“There’s a lot of variation from year-to-year,” said Glenn McCroan, who works at the fish lift with DNR. “It seems like these things go in different cycles for each species. One year we see more shad, the next we see more herring. It just depends. It was a little below average for what we are used to seeing, but a pretty average year.”

Shad and herring from stocks along the Atlantic Seaboard spend the autumns feeding on plankton. As they get older and mature, normally when the fish are three or four years old, they head back to their spawning waters in the lakes and rivers around St. Stephen in the spring.

The anadromous fish play a vital role in the ecological system of the freshwater rivers and lakes. Fish that live in the lakes year-round, such as striped bass, feed on the returning blueback herring.

“If the shad and herring were unable to return to the lakes, it would totally change the ecosystem of the lakes and rivers,” Hoffman said.

Wayne Tairney, 51, has fished the canals and lakes around St. Stephen his whole life and understands the importance of the lift and its impact on the lakes.

“There are some great spots to fish around here in the canals on the lakes,” said Tairney, who works as a fishing guide on lakes Moultrie and Marion. “Without those shad and herring, I doubt it would be as good.”