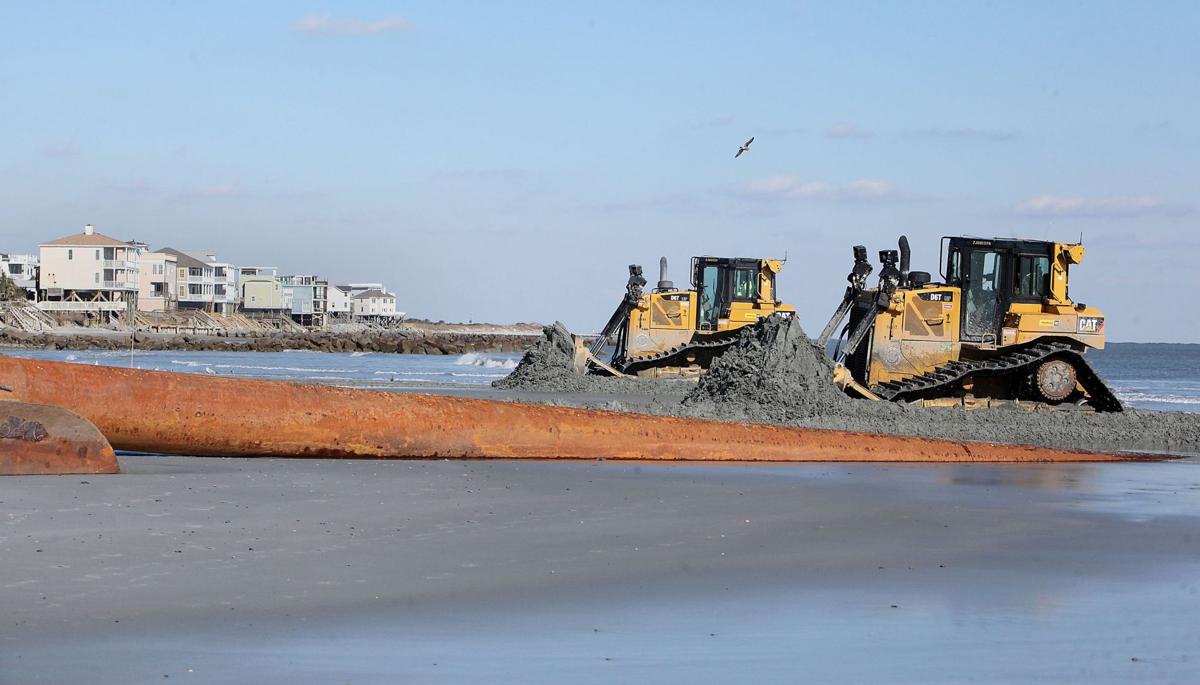 Bulldozers move sand pumped onto the beach from three miles out in the Atlantic Ocean during the 2014 renourishment effort. File/Brad Nettles/Staff 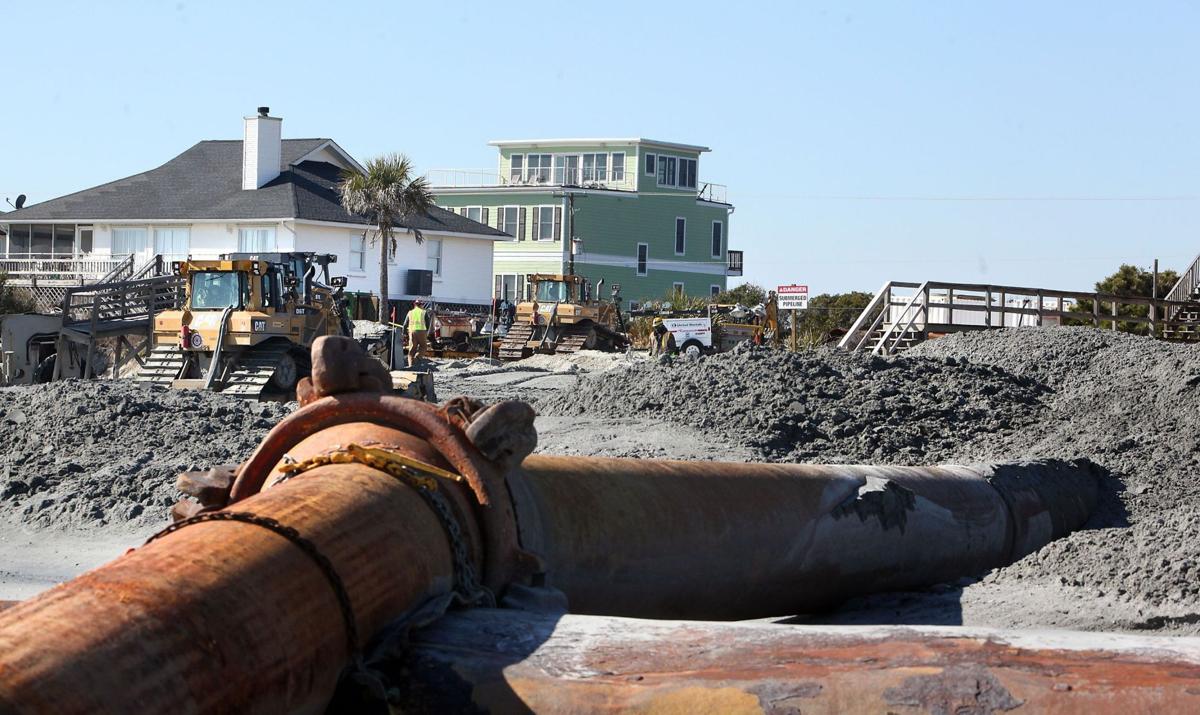 The previous renourishment project at Folly Beach was in 2014. File/Brad Nettles/Staff

Bulldozers move sand pumped onto the beach from three miles out in the Atlantic Ocean during the 2014 renourishment effort. File/Brad Nettles/Staff

The previous renourishment project at Folly Beach was in 2014. File/Brad Nettles/Staff

The pipe moved its way along the beach slowly, belching out a gray slurry of sand and water in the area's latest beach renourishment project.

The work was an emergency effort, funded completely by the federal government and meant to rebuild the shoreline after severe erosion from Hurricane Matthew, the year before.

Like all renourishment projects, it temporarily shuttered sections of the beach. Tourists, the lifeblood of the lucrative Grand Stand's economy, had to deal with a loud work site, sometimes right in front of their rental homes.

"It was very disruptive to the rental properties," said Surfside Mayor Bob Childs. "They had so many problems, it dragged on almost the entire summer, as I recall."

This year, it's happening all over again.

Beach renourishment projects, which once provided shoreline protection that lasted for more than a decade, are becoming more frequent. Beach managers are hemmed in on both sides by a crush of development that concentrates valuable property along the coast and by rising sea levels, which threaten coastal infrastructure and the beach itself.

The work of pumping sand back onto the beach and rebuilding dunes is the gold standard of shoreline protection. But it doesn't take a long trip to find examples of beaches that are already on an accelerated renourishment schedule. In Wrightsville Beach, just outside of Wilmington, N.C., renourishment projects are happening at least every four years, according to the Star News.

“Beach nourishment is an endless commitment," said Rob Young, who studies developed shorelines at Western Carolina University. "Any place that you’re doing beach nourishment now you’re going to be doing it forever, and it’s going to have to be done more frequently in the future than you have in the past."

From the 1950s to the 1970s, many coastal communities dealt turned to sea walls or other forms of hardening. But these walls and other structures inevitably accelerate erosion nearby, especially on the side facing the water.

As a result, Young said, a beach can't persist in those areas without renourishment. The consensus in coastal communities has changed over time to favor renourishment and dune construction over hardening the shore.

"It became pretty evident that, especially in heavily developed shorelines, that whether you build a seawall or not you’re going to have to be pumping sand to keep the beach in place," Young said.

Folly Beach faces persistent erosion problems, partly because jetties built at the mouth of Charleston Harbor disrupt the southward flow of sand. The beach is supposed to be on an eight-year renourishment cycle, but Mayor Tim Goodwin said, "That doesn't mean anything," because of the unpredictability of tropical storms.

Folly's first federal renourishment project in 1993 held up for 12 years, but its 2005 project needed emergency work only two years later in the wake of Hurricane Ophelia. Its next project was a year ahead of the prescribed cycle, in 2014. After three years of erosive storms, renourishment is set to start again on the beach this July.

The Grand Strand, the only other federally managed set of beaches in the state, faces a similar acceleration of renourishment work, with more emergency projects in between storms.

Last year, the north and south sections of the Grand Strand received an emergency sand delivery just before Tropical Storm Irma swept up from Florida through Georgia and thrashed South Carolina.

This year, the beaches will be fortified again, from North Myrtle Beach all the way to Garden City. Work will begin in August, according to Sean McBride, spokesman for the Charleston District of the Army Corps of Engineers.

Research shows it's likely that tropical storms will become more intense as the climate warms. Storms are also slowing down, meaning their most intense effects can linger for longer periods and they can dump more rain, according to a recent study.

Coupled with sea level rise, that means more renourishment projects, and likely more difficulty in finding the sand necessary for the work.

Sand used in renourishment has to be in an easily accessible spot several feet deep because it would be too costly and "environmentally disastrous" to dredge a thin layer across a broader cross section of the ocean floor, Young said.

"We can't sweep the entire near shore area ... to collect up all the sand like we were sweeping our kitchen floor. We need a sandbox," Young said.

In some areas of the Grand Strand, however, beach-quality sand appears to be migrating to the outer continental shelf, said Paul Gayes, a coastal geologist with Coastal Carolina University. Offshore of Surfside Beach, and in some areas of North Myrtle Beach, there's little to no usable sand.

The farther offshore sand is, the more it costs to transport it back.

"There’s not a continuous sheet of sand out there," Gayes said. "There’s a great deal of very thin veneers, and in some places, no sand whatever."

A lack of usable sand has already hit a critical point in south Florida, where local governments hope to start shipping in sand from the Bahamas.

They're pushing to overturn federal regulations that bar the Army Corps from using foreign sand or foreign contractors to complete renourishment work. Miami Dade County depleted its offshore sources of accessible, beach-quality sand in 2016 and now uses sand trucked in from inland mines, according to a Miami Herald report. Trucking in sand makes an already costly process even more expensive.

The sections of South Carolina's coast that are frequently renourished still are several years away from depleting the known deposits of material, but Gayes said that situation might not last forever.

"It’s not to hard to imagine down the line where you might have conflict or competition for those resources," he said.