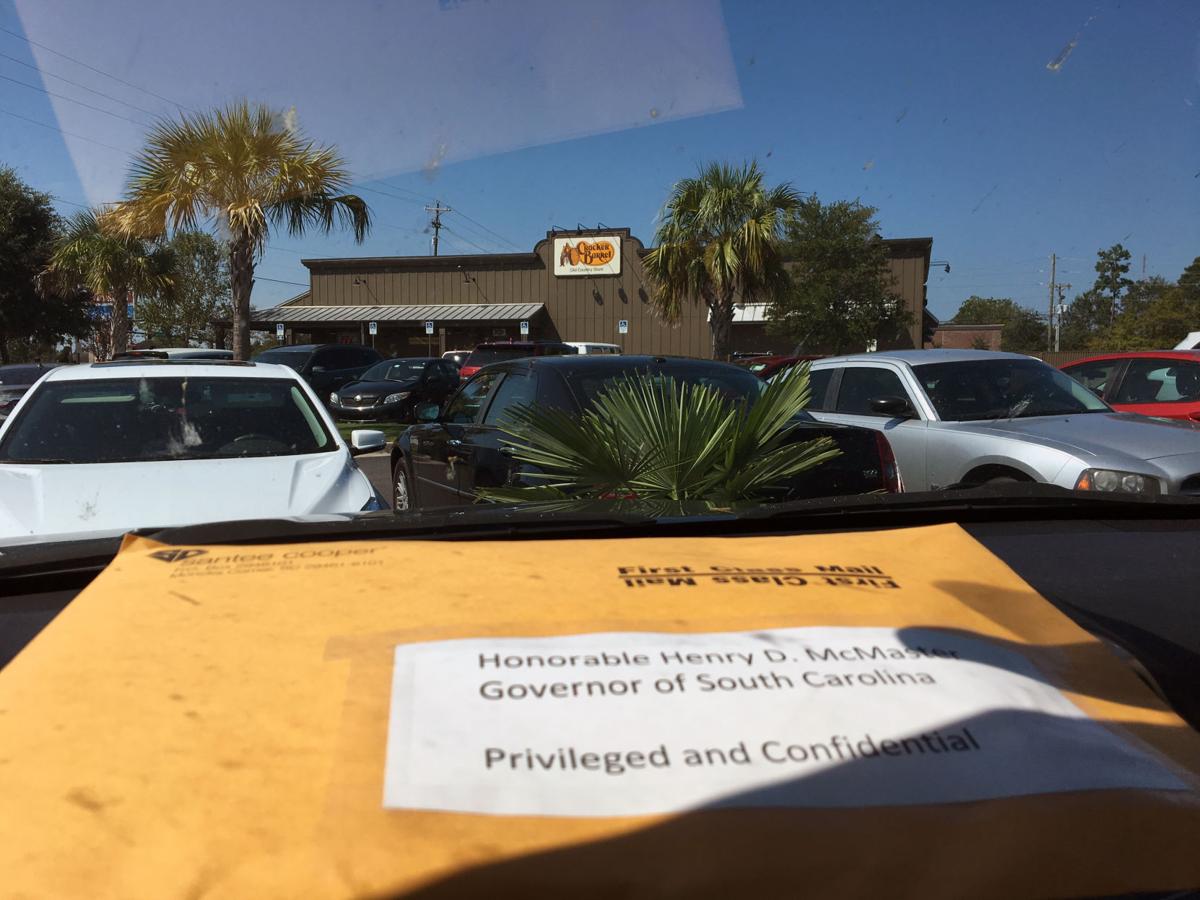 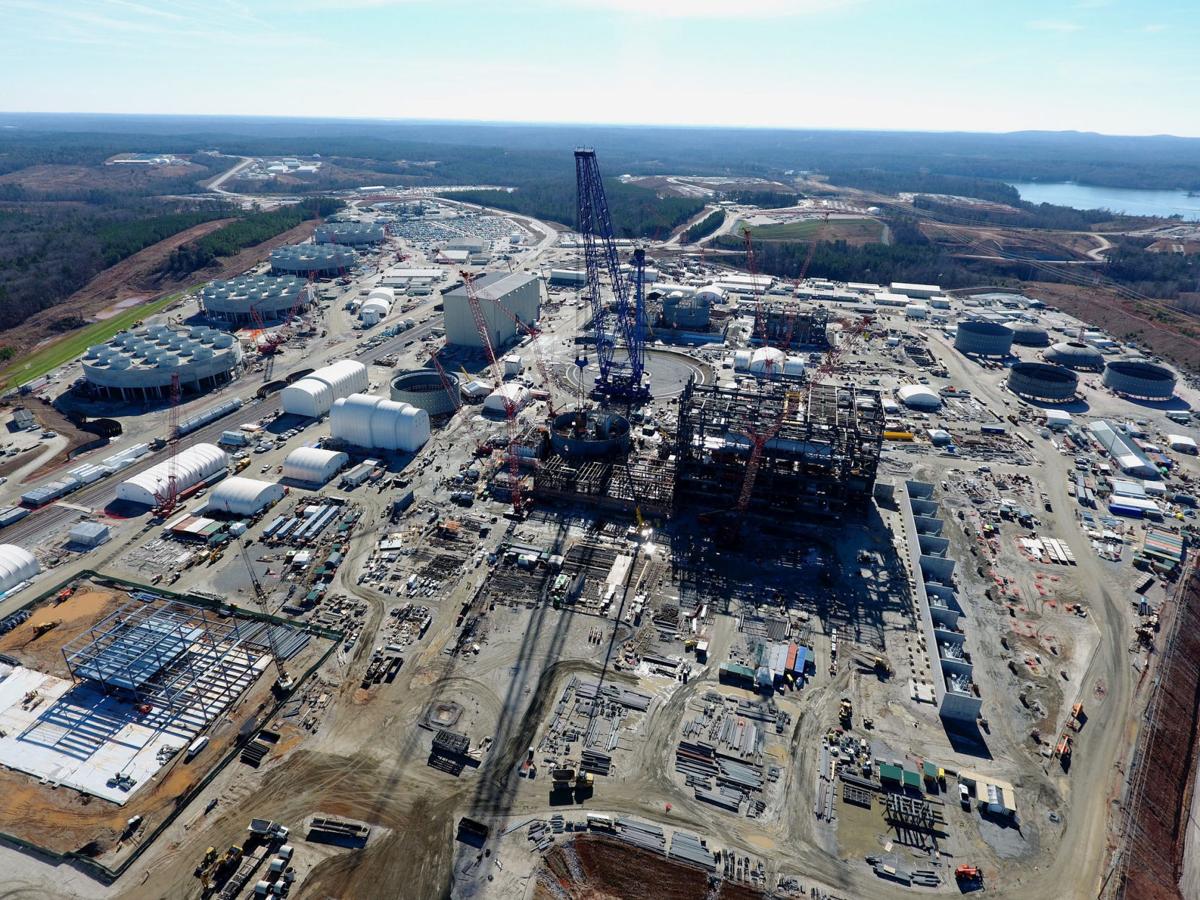 COLUMBIA — A newly released audit shows SCANA and Santee Cooper knew the effort to construct two nuclear reactors in Fairfield County was failing more than a year before the ambitious energy project was scrapped this July.

The audit conducted by Bechtel, the country's largest construction and civil engineering firm, provides evidence that the partnering utilities knew of significant flaws with their primary contractor Westinghouse, but continued to tout the reactors being built at the V.C. Summer site and advocate for additional funding for a project already years behind schedule.

Bechtel completed its 130-page report in February 2016, three months before investor-owned SCANA asked state utility regulators to increase its share of the total project cost by more than $800 million and approve a fixed-price contract with now-bankrupt Westinghouse.

All the while, SCANA officials told state regulatory staff members that they didn't have a physical copy of the report that they could share — a statement they contradicted under oath last month. 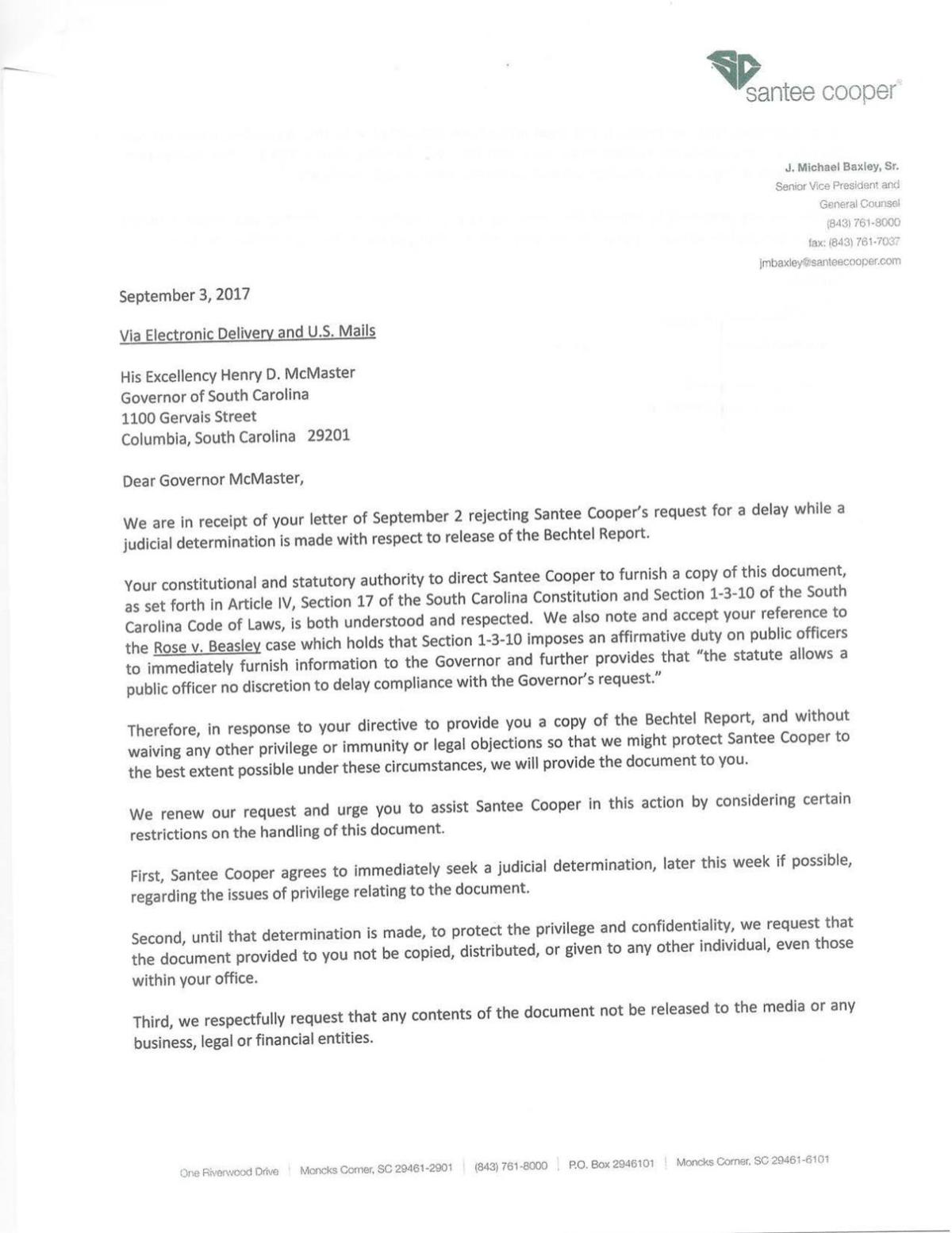 The audit was released by Gov. Henry McMaster's office late Monday, after the state's Republican leader pushed state-run Santee Cooper to hand over the document that is at the center of two legislative investigations into the $9 billion construction failure.

The governor's office dropped the report to get ahead of an expected legal challenge by SCANA. The utility's attorneys tried to keep the document private, arguing that was it was protected under attorney-client privilege. McMaster, a former state attorney general, said the document enjoyed no such protection.

Bechtel's findings also suggested that Westinghouse and the other contractors that circulated through the project over the past decade weren't "commercially motivated" to finish the reactors.

Eric Boomhower, the director of communications for SCANA, told the Associated Press that SCANA had made improvements after the audit was finished.

But the public release of the document could raise serious problems for investor-owned SCANA and Santee Cooper, which are already under increasing political and legal pressure following the reactors' cancellation.

The Bechtel audit has been the primary focus of two legislative committees in past weeks. State lawmakers had requested the document and threatened to subpoena it if the utilities didn't release it.

That fight spilled into the governor's office late last week when McMaster ordered the nine-member Santee Cooper board to hand over the audit under the threat of termination.

"We're not in a fight with the governor's office," Santee Cooper board chairman Leighton Lord said Monday. "We're not going to defy the governor on this."

Santee Cooper's attorney advocated against releasing the document, warning that it could make it more difficult to defend against class-action lawsuits that have already been filed on behalf of electric customers. The utility's attorney suggested a judge should handle the matter.

But Lord and the rest of the Santee Cooper board shared the document with lawmakers on Sunday, a move that SCANA opposed. 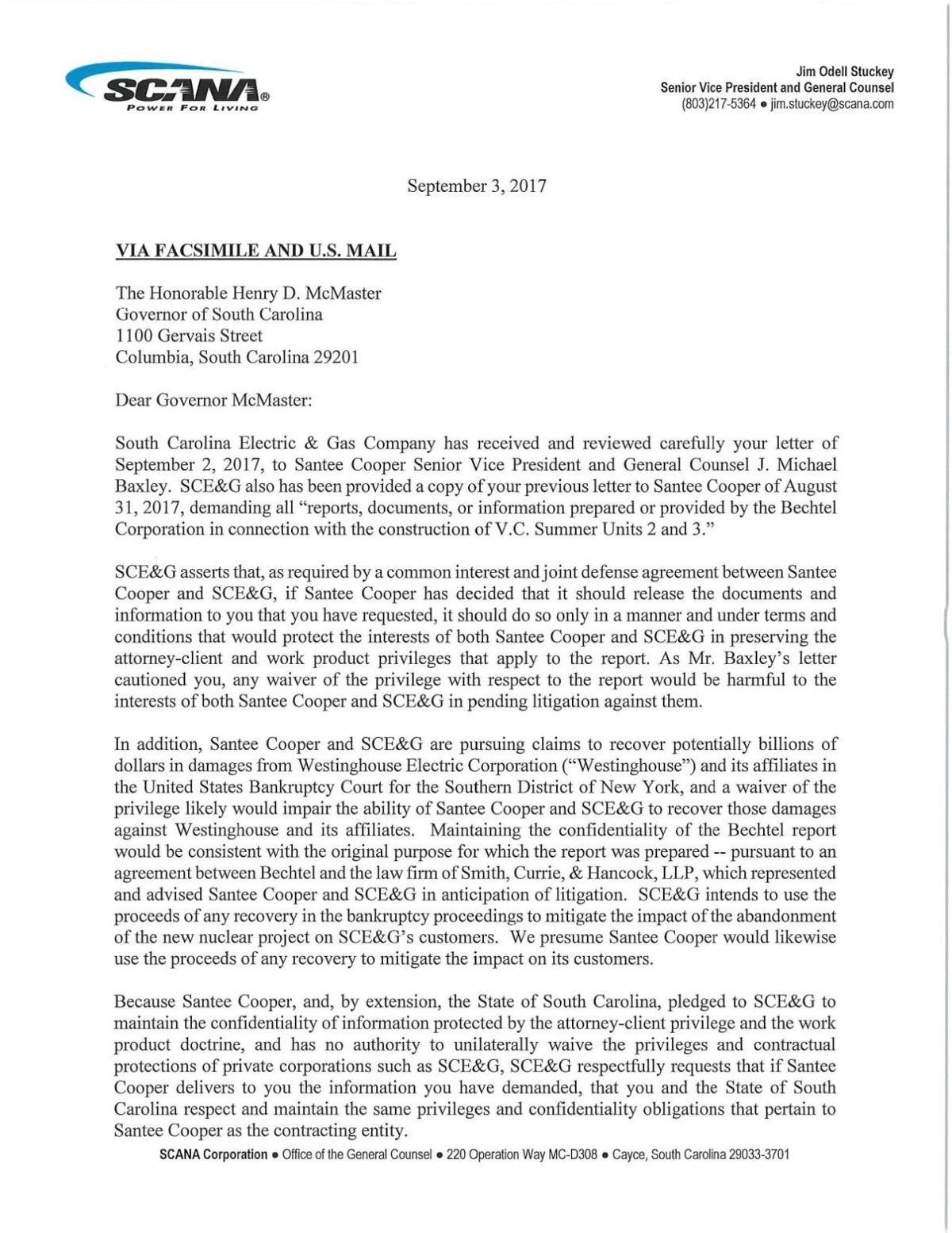 In a letter to McMaster, an attorney for SCANA argued that sharing the document could jeopardize "billions of dollars in damages" that Santee Cooper and SCANA are seeking to collect from Westinghouse, the lead contractor on the project that filed for bankruptcy in March.

The investor-owned utility also said that Santee Cooper has "no authority" to unilaterally release the document, and that if the report was released to the governor and other lawmakers, it had to remain legally-privileged information.

The timing of the report raises serious questions for SCANA and Santee Cooper. Less than a year after Bechtel's findings were completed, the two utilities signed a fixed-price contract with Westinghouse — a deal the bankrupt company can no longer fulfill.

By early 2016, the total estimated cost for the two reactors had increased by billions of dollars and the completion dates for the first reactor had been pushed back from 2016 to 2020. The partnering utilities still had not received a legitimate construction schedule that had been promised since 2009.

The audit raised other warnings, too. Bechtel's staff pointed out that parts for the reactors were delivered to V.C. Summer years before they were needed, and some of those expensive components were possibly at risk of being ruined.

They also highlighted a serious morale problem with the welders, electricians and engineers working at the site. Those workers told the Post and Courier that most of the laborers at site were troubled by the chaos and mismanagement at V.C. Summer for years.

According to the audit, there was more than a 17 percent turnover in the engineering and management staff at V.C. Summer during the time that Bechtel employees were on site. Bechtel described this as "high for a typical nuclear project." 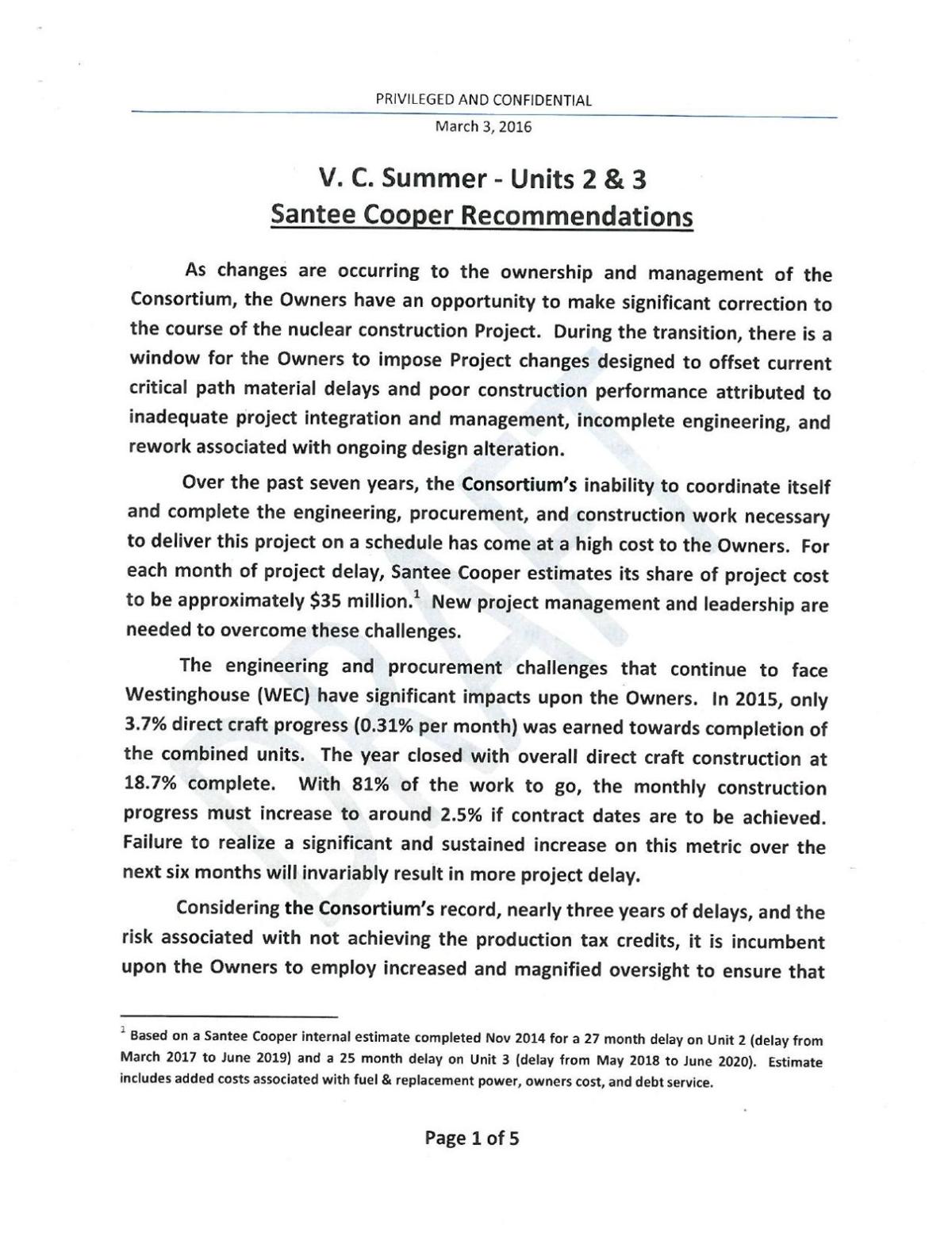 Internal Santee Cooper documents from that time showed that only 0.3 percent of the reactors were being built every month. That was not nearly enough progress to get the power plants completed by the end of 2020, when federal tax credits are set to run out.

The engineering documents delivered by Westinghouse, the audit said, needed hundreds of changes made on site every month in order to work.

The modular design that Westinghouse successfully pitched to SCANA and Santee Cooper was one of the biggest impediments to the project, the audit said.

"While a great idea in theory, their use so far has been a detriment to the project progress and consequently the budget," the report said of the pre-fabricated parts.

"This was a complex project," Lord said. "It was hard to know what Westinghouse was doing everyday without real experts working with them."

After the report was finalized, Santee Cooper reportedly floated the idea of hiring a third-party construction manager to oversee the project as it continued.

But SCANA, which held "primary responsibility" in overseeing the reactors's construction, rejected that proposal.