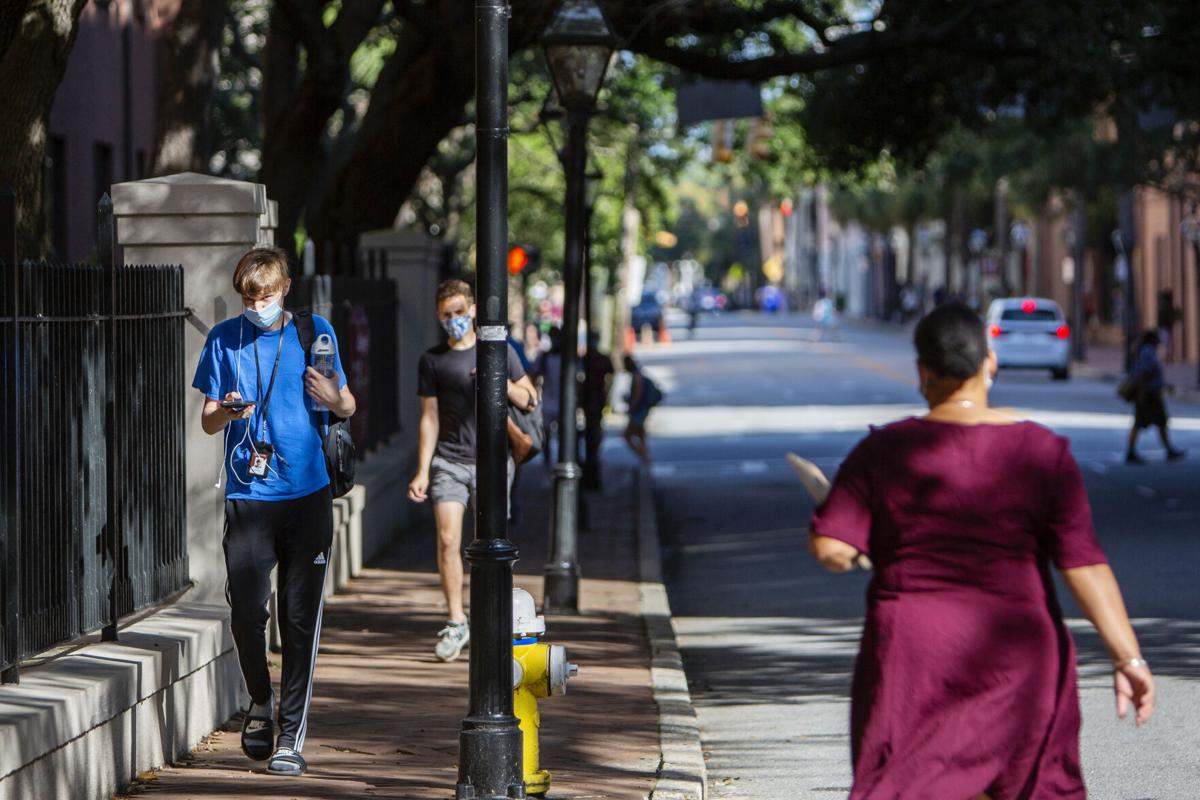 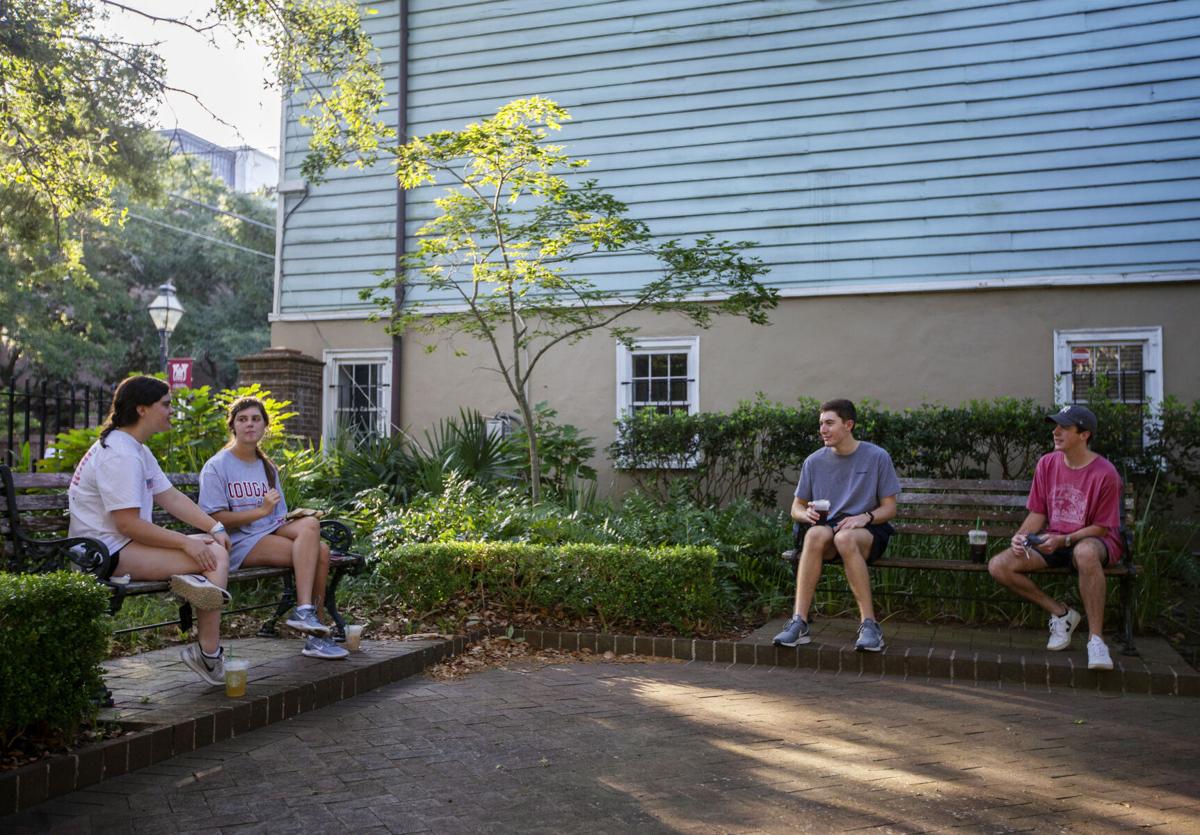 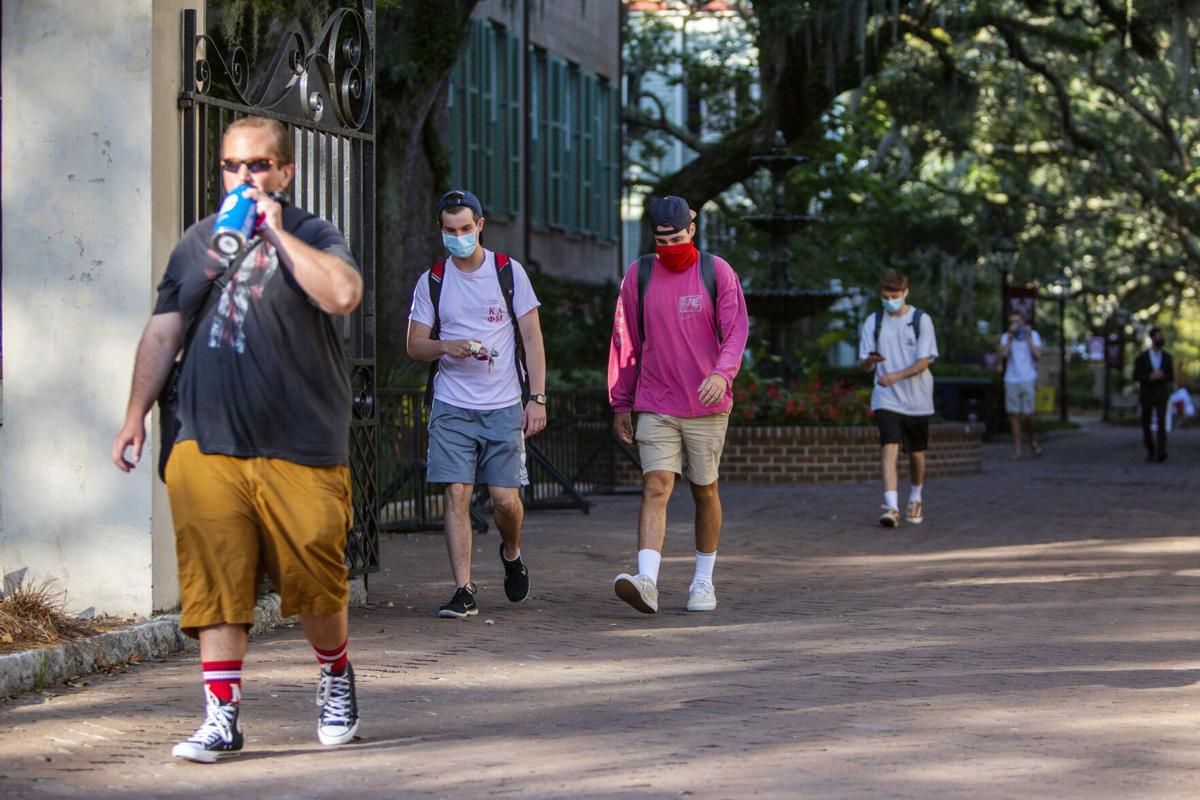 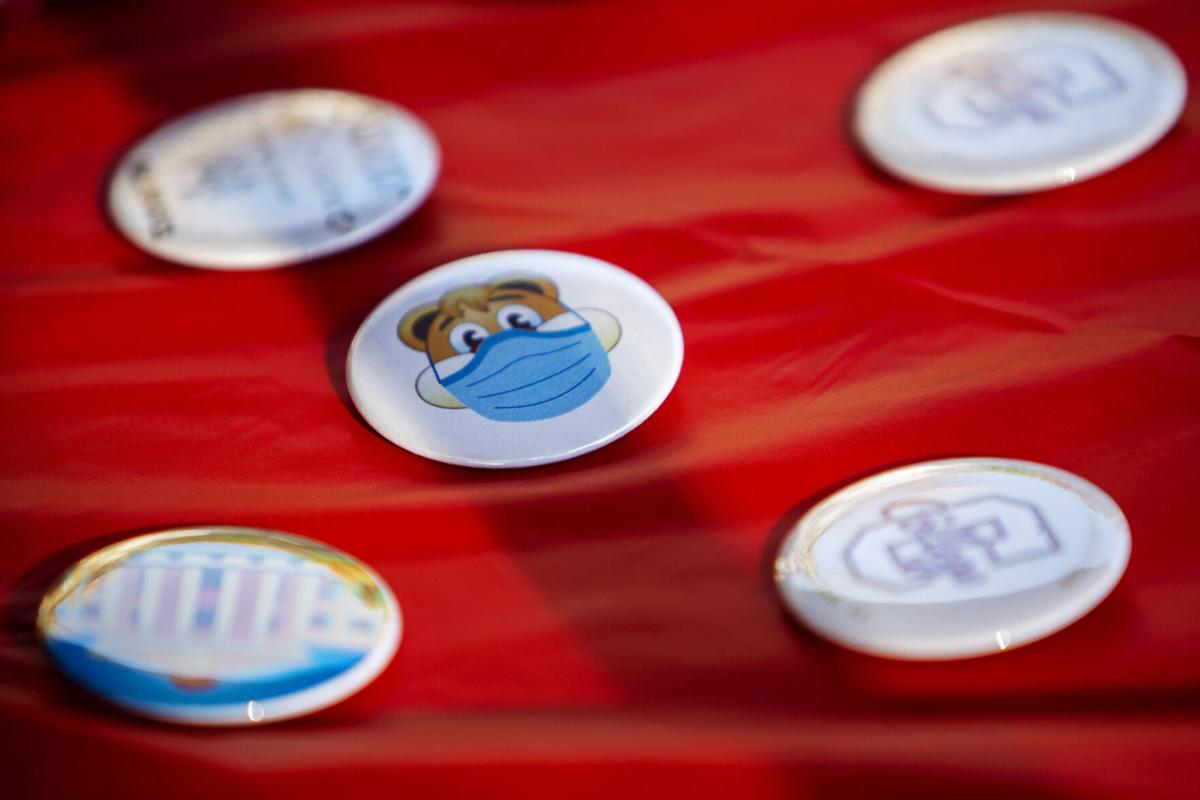 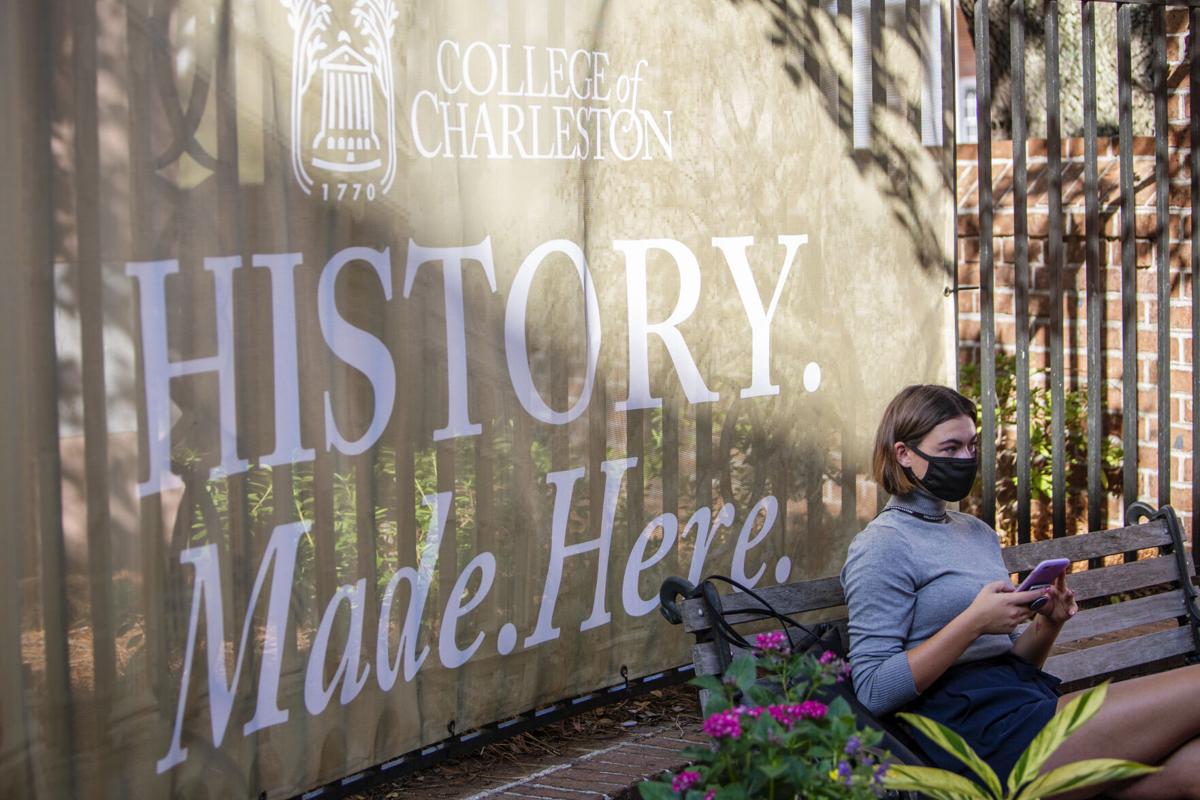 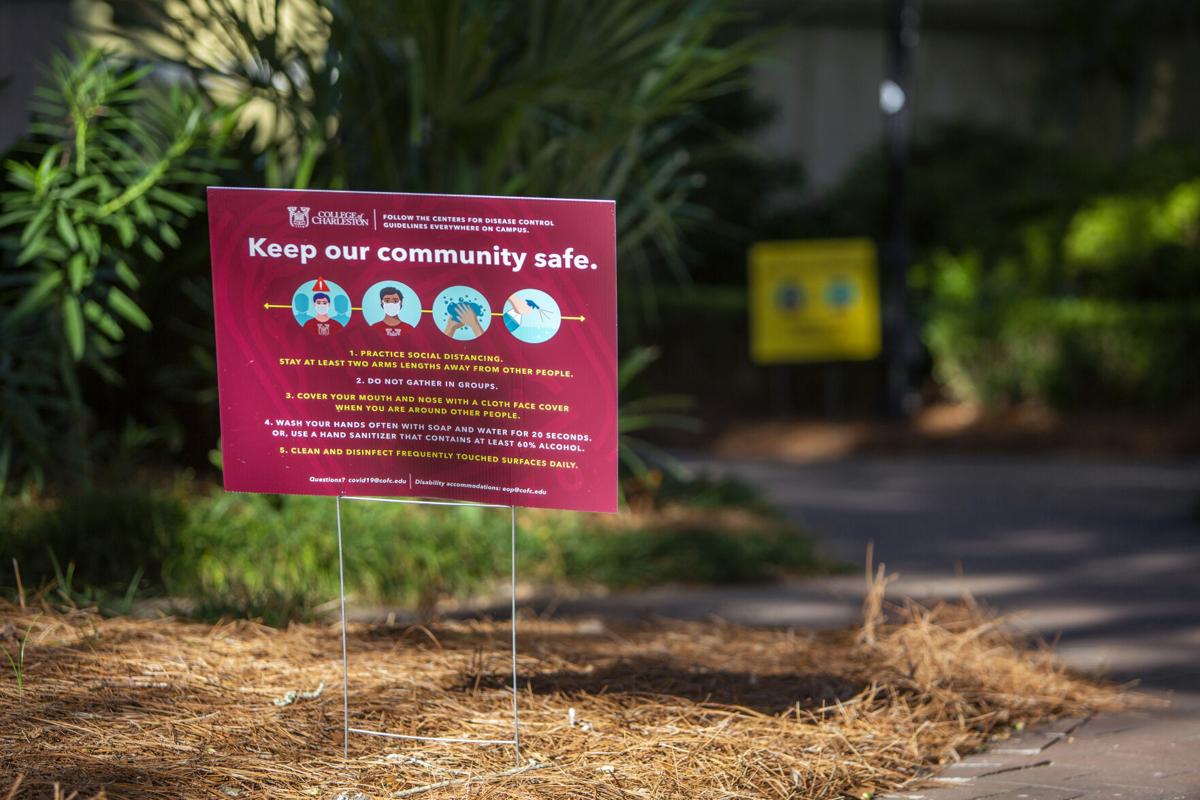 Signs informing students about ways to prevent the spread of the coronavirus are set up throughout the College of Charleston Monday, Sept. 14, 2020, in Charleston. Students resumed in-person classes for the first time since the school shuttered in mid-March. Gavin McIntyre/Staff 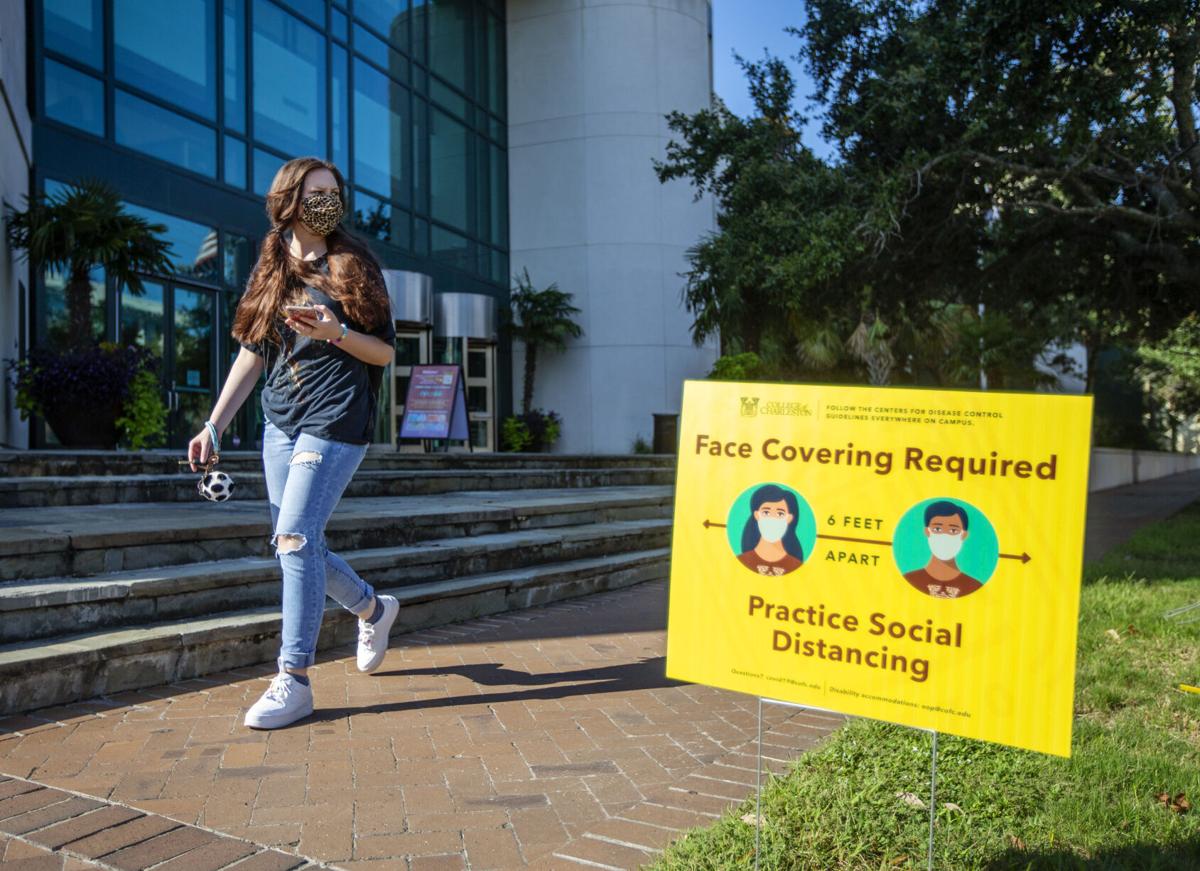 As thousands of students flocked to the College of Charleston’s campus this week for in-person classes, tensions expected between downtown residents and their college-aged neighbors have largely been eased.

This summer there was a feeling of skepticism and anxiety among some neighborhood residents who feared students’ eventual return to the classroom would result in a dangerous spike in coronavirus cases downtown.

So far, school leaders say, that hasn’t been the case.

On Monday, the first day of face-to-face instruction, many C of C students wore masks as they traversed across the school’s 50-acre campus in the heart of the city.

Social distancing in the classroom hasn’t been an issue either.

But enforcing students’ actions on campus is exponentially easier than monitoring what takes place in the dozens of privately owned apartment complexes and rental properties that sit just beyond the university’s boundaries.

While neighborhood residents' concerns have dwindled, some students fear the worst, and there's apprehension that reckless behavior off campus will jeopardize the success of the fall semester.

If a widespread outbreak were to occur on campus, the college is prepared to transition all classes back online, a potentially devastating blow for some students who’ve been eagerly anticipating a returning to the classroom for nearly six months.

Tension, unease as 2,000 students expected in downtown Charleston in next 3 weeks

Campus was noticeably quieter this week, compared to the usual hectic back-to-school rush.

At the corner of Calhoun and St. Philip, an intersection that’s usually so crowded it’s nearly impossible for oncoming traffic to turn due to the jam-packed crosswalk, cars were able to pass with ease.

On the morning of students’ first day of in-person classes, a pop-up tent outside the college's Coming Street library entrance housed stacks of maroon face masks in clear plastic wrapping and a box of travel hand sanitizer bottles.

On George Street, one of these so-called "pathfinder stations" was staffed by C of C junior Camille Sullivan, a geology and Spanish double major. The stations were set up to help with directions, especially for freshman students who couldn't visit campus for new student orientation this summer.

Sullivan said she was one of five students at her 9 a.m. data management and organization in-person class on Monday.

At the start of class, Sullivan’s professor signed on to a Zoom call to greet those students who were tuning in virtually.

Oddly enough, the five students attending the class in person signed onto the same Zoom call from their own personal laptops. They all used headphones to prevent loud feedback from interrupting the class.

This made it easier to participate, Sullivan said, but it’s obvious this new format will take getting used to, both for students and professors.

"It was a little rocky at first, we had some technical issues, but we eventually got them figured out," she said.

When it comes to being safe on campus, most people try to follow the rules, Sullivan said.

Still, she said, she knows there are some students who’ve chosen to blatantly ignore the school’s new COVID-19 protocol, such as a 10-person limit on social gatherings.

"I don't really have any respect for them," she said. "I think they're being selfish, especially when you know there are people here who have legitimate health problems and are still risking their lives."

To date, the city of Charleston has issued 49 summonses for violating the city’s mask mandate.

From Aug. 10 to Friday, the College of Charleston has received 77 reports through its anonymous reporting web portal: 10 reports of large social gatherings, six reports of students breaking quarantine or isolation and 52 for not wearing a face covering or social distancing.

The total number of COVID-19 cases in isolation reported as of Thursday was 37, including 36 students and one employee, according to the school's dashboard.

Maddie Gies, a C of C senior, said her online classes have been less than ideal.

Gies is a special education major, and she's supposed to have already completed an internship at a local school district, but that was cut short in the spring.

This fall's intern placement is also up in the air.

While her professors have been helpful and accommodating, it’s been difficult to learn in some classes that otherwise would have relied heavily on students' experiences outside of the classroom.

As she signed on to her first Zoom class of the week at 9:30 a.m. from the Rivers Green lawn behind the library, Gies noticed how quiet things were on campus. This time last year, the lawn would have been full of students sprawled out on blankets or towels. On Monday morning, she was the only student on the grass.

Last week, Gies visited her sorority sister’s apartment and counted at least 28 people attending a nearby house party near Felix and Morris streets.

"It was ridiculous. Well, I guess it was more frustrating than anything," she said.

While students, faculty and community members are encouraged to report violations of campus coronavirus safety measures through the school’s behavioral conduct website, Gies said it can be challenging to report students for violating the college’s limit on social gatherings if she doesn’t know the names of those responsible.

"Right when you step off campus it’s like there’s no regulation. But I think that’s just the reality of it," she said.

Alicia Caudill, the college’s executive vice president for student affairs, said anyone can report a potential violation through the student conduct page. Any information is helpful, she said, like the time or location of the incident.

While the college may look different, the city's nightlife district has quickly rebounded.

Hundreds of college-aged students have continued to flock to popular bars along King Street, many of them ignoring posted face covering ordinances.

"We've been following the rules and doing everything right for so long," Gies said. "And then to look out of our windows or drive down King Street at night on Friday or Saturday, or go to a friend's house and see the massive parties, it feels like a lot of pressure."

Off campus harder to control

He spoke of the hard work staff and faculty tackled to prepare for hybrid, in-person classes and wanted to assure City Council the school’s COVID-19 response team would monitor numbers around the country and on the campus.

The college is partnering closely with the city officials and police to monitor students’ behavior outside of college-owned properties.

"Our hope is we can use some of the city ordinances to control partying," Hsu said. He added, "They need to consider the consequences of their actions, not only to themselves, but to their classmates, their friends and to the entire institution."

The college has widely publicized its strict stance toward rule violators, but there already have been challenges.

Earlier this week, two C of C fraternities were placed on interim suspension after school officials received reports they had violated the school’s social-gathering and face-covering policies.

On Tuesday, school officials learned that one of the organizations had their event approved in advance and did not violate any face-covering or social-gathering rules. The other organization showed their gathering took place virtually and someone reported a house that wasn't connected to their organization, school spokesman Ron Menchaca said. Both interim suspensions were lifted.

Concern about weekend partying still bubbles under the surface among neighborhood residents, but discussion this week also shifted to more common issues.

Residents in the Cannonborough-Elliotborough neighborhood — a popular college-student apartment rental area — held a virtual meeting Monday night. City Councilman Robert Mitchell, who represents a large portion of that area, said concerns raised at the meeting focused on educating students about the change in garbage collection days and making sure they bring their cans to the curb.

Marion Hawkins, neighborhood association president, said the staggered opening hasn't brought about as many issues with partying and social distancing compared to earlier this year and over the summer.

"Students, as well as residents and even visitors and tourists, we've all settled into some new normal and I think that's kind of playing out there now," Hawkins said. "We've all kind of acclimated to the proper interactions and procedures with businesses and each other."

Hawkins said the problems aren't usually widespread, and the neighborhood appreciates the vitality that comes back year after year.

While campus leaders remain optimistic, the true test of the reopening will become apparent Sept. 28, two weeks after the first day of classes.

Two weeks is the presumed amount of time it takes for COVID-19 exposure to show in the form of detectable illness.