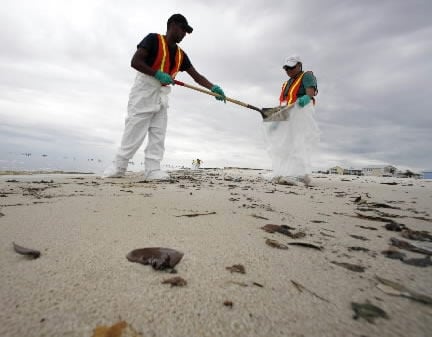 Workers in Pass Christian, Miss., clean up blotches of oil, mixed with other shoreline debris, that washed ashore Thursday during high seas produced by Hurricane Alex. 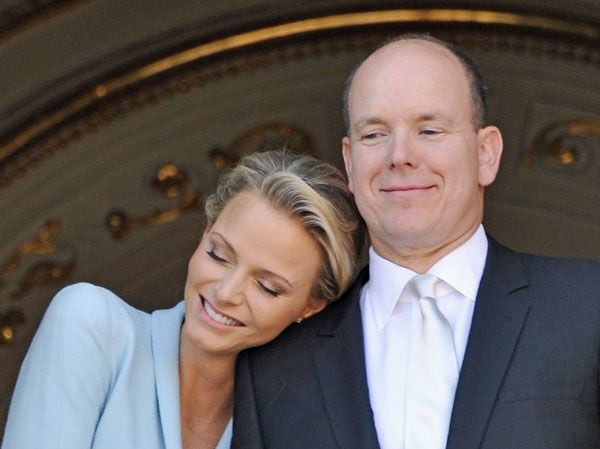 Prince Albert II of Monaco appears with his bride, Princess Charlene of Monaco, after the civil wedding ceremony Friday at the Monaco palace.

Workers in Pass Christian, Miss., clean up blotches of oil, mixed with other shoreline debris, that washed ashore Thursday during high seas produced by Hurricane Alex.

Prince Albert II of Monaco appears with his bride, Princess Charlene of Monaco, after the civil wedding ceremony Friday at the Monaco palace.

NEW ORLEANS -- Many fishing boats signed up to skim oil sit idle in marinas. Some captains and deckhands say they have been waiting for instructions while drawing checks from BP of more than $1,000 a day per vessel. Thousands of offers to clean beaches and wetlands have gone unanswered.

BP and the Obama administration faced mounting complaints Thursday that they are ignoring foreign offers of badly needed equipment and making poor use of the fishing boats and volunteers available to help clean up what may now be the biggest spill ever in the Gulf of Mexico.

Based on some government estimates, more than 140 million gallons of crude have spewed from the bottom of the sea since the April 20 explosion that killed 11 workers on the Deepwater Horizon oil platform, eclipsing the 1979-80 disaster off Mexico that had stood as the worst in the Gulf.

Some government estimates put the amount of oil spilled at 160 million gallons. That calculation was arrived at by using the rate of 2.5 million gallons a day back to the oil rig explosion.

The Associated Press, relying on scientists who advised the government on flow rate, bases its estimates on a lower rate of 2.1 million gallons a day up until June 3, when a cut to the well pipe increased flow.

By either estimate, the disaster would eclipse the Ixtoc disaster in the Gulf two decades ago and rank as the biggest offshore oil spill during peacetime.

In recent days and weeks, for reasons BP never has explained, many fishing boats hired for the cleanup have done a lot of waiting. At the same time, there is mounting frustration over the time it has taken the government to approve offers of help from foreign countries and international organizations.

The Coast Guard said there have been 107 offers of help from 44 nations, ranging from technical advice to skimmer boats and booms.

Many of those offers are weeks old, and only a small number have been accepted, with the vast majority still under review, according to a list kept by the State Department.

A report prepared by investigators with the House Committee on Oversight and Government Reform for Rep. Darrell Issa, R-Calif., detailed one case in which the Dutch government offered April 30 to provide four oil skimmers that collectively could process more than 6 million gallons of oily water a day.

It took seven weeks for the U.S. to approve the offer.

"That is a myth," he declared. "That has been debunked literally hundreds of times."

He said 24 foreign vessels were operating in the Gulf before this week. He did not specifically address the Dutch vessels.

More than 2,000 boats have signed up for oil-spill duty under BP's Vessel of Opportunity program.

The company pays boat captains and their crews a flat fee based on the size of the vessel, ranging from $1,200 to $3,000 a day, plus a $200 fee for each crew member who works an eight-hour shift.

Rocky Ditcharo, a shrimp-dock owner in Buras, La., said many fishermen hired by BP have told him that they often park their boats on the shore while they wait for word on where to go.

"They just wait because there's no direction," Ditcharo said. He said he thinks BP has hired many boat captains "to show numbers."

"But they're really not doing anything," he said. He also said he suspects the company is hiring out-of-work fishermen to placate them with paychecks.

Billy Nungesser, president of Louisiana's hard-hit Plaquemines Parish, said BP and the Coast Guard provided a map of the exact locations of 140 skimmers that were supposedly cleaning up the oil.

But he said that after he repeatedly asked to be flown over the area so he could see them at work, officials told him only 31 skimmers were on the job.

Newly retired Coast Guard Adm. Thad Allen, the government's point man for the response effort, bristled at some of the accusations in Issa's report.

"I think we've been pretty transparent throughout this," Allen said at the White House. He disputed any suggestion that there aren't enough skimmers being put on the water, saying the spill area is so big that there are bound to be areas with no vessels.

The Coast Guard said there are roughly 550 skimmers working in the Gulf.