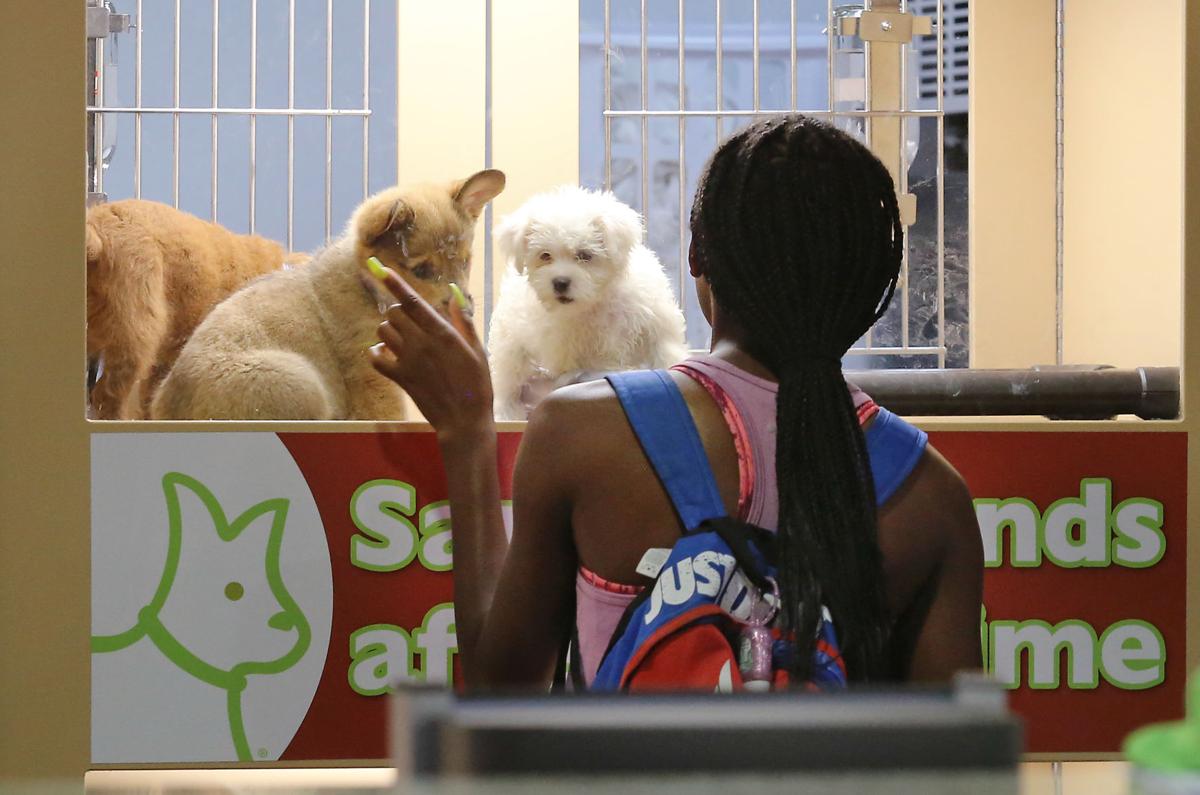 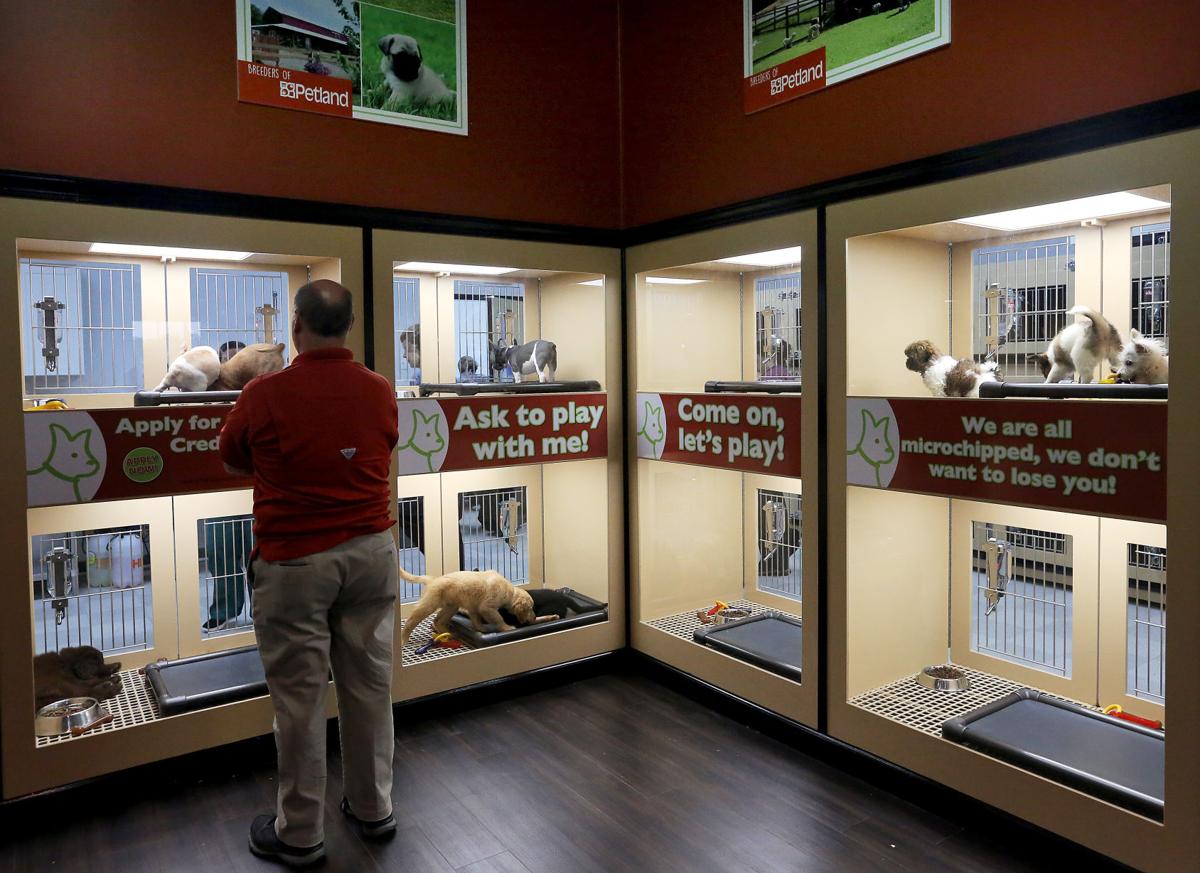 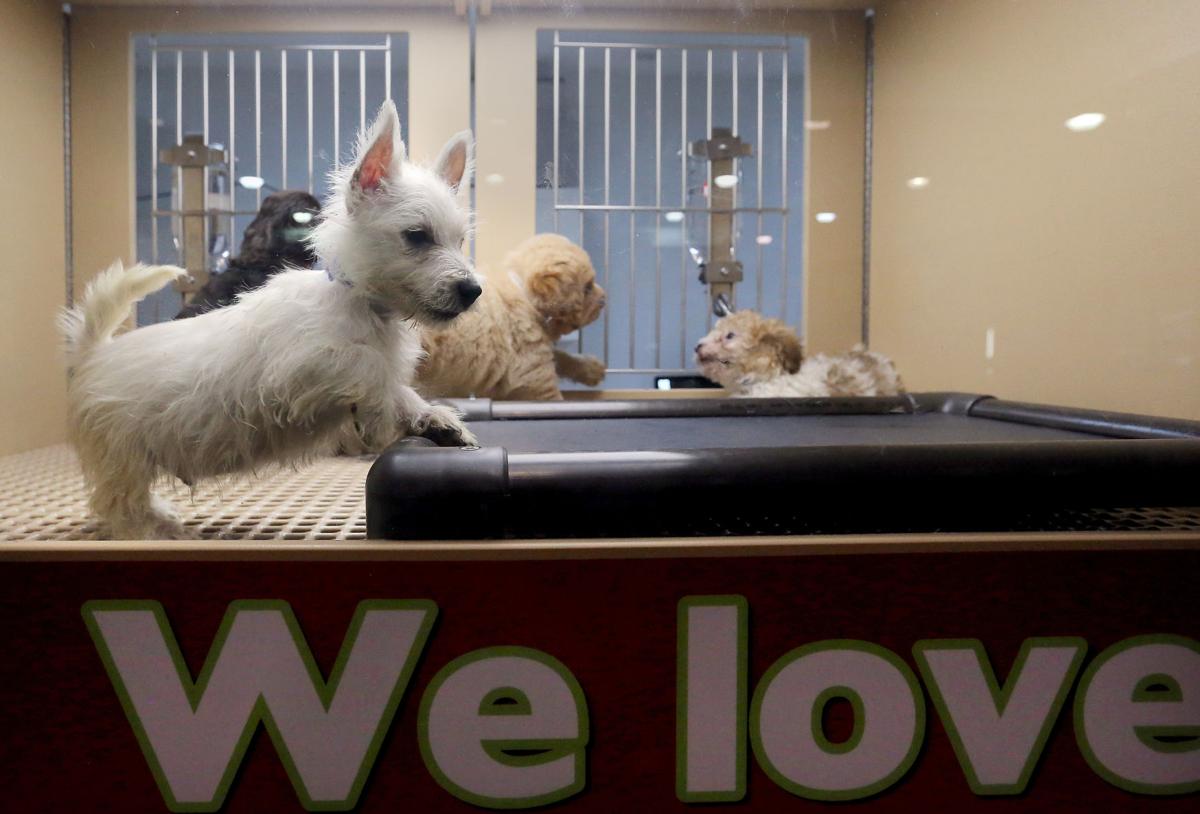 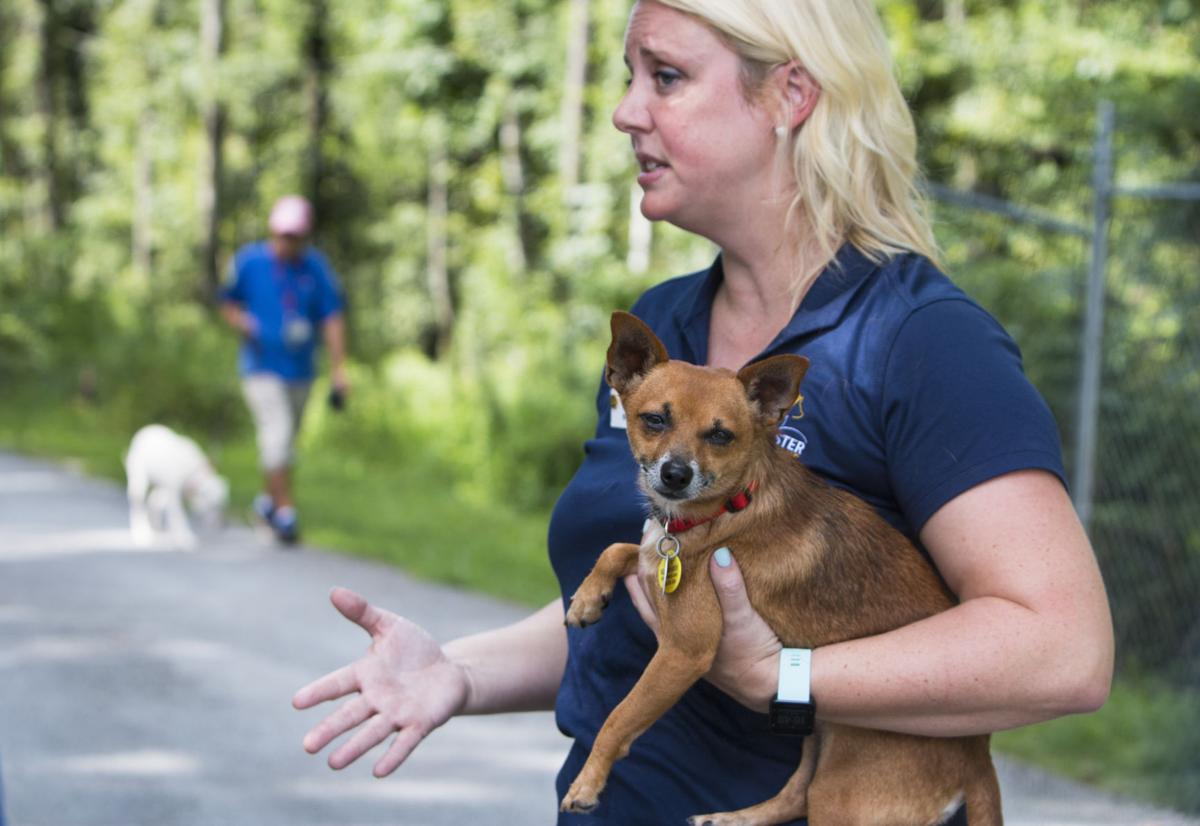 Kim Almstedt, executive director of Dorchester Paws, holds a chihuahua that she says is an example of the purebred animals people can find in shelters. Lowcountry rescue groups got together on Thursday, Aug. 2, 2018, for a press conference to protest a Summerville pet store's decision to sell dogs from commercial breeders. File/Kathryn Ziesig/Staff 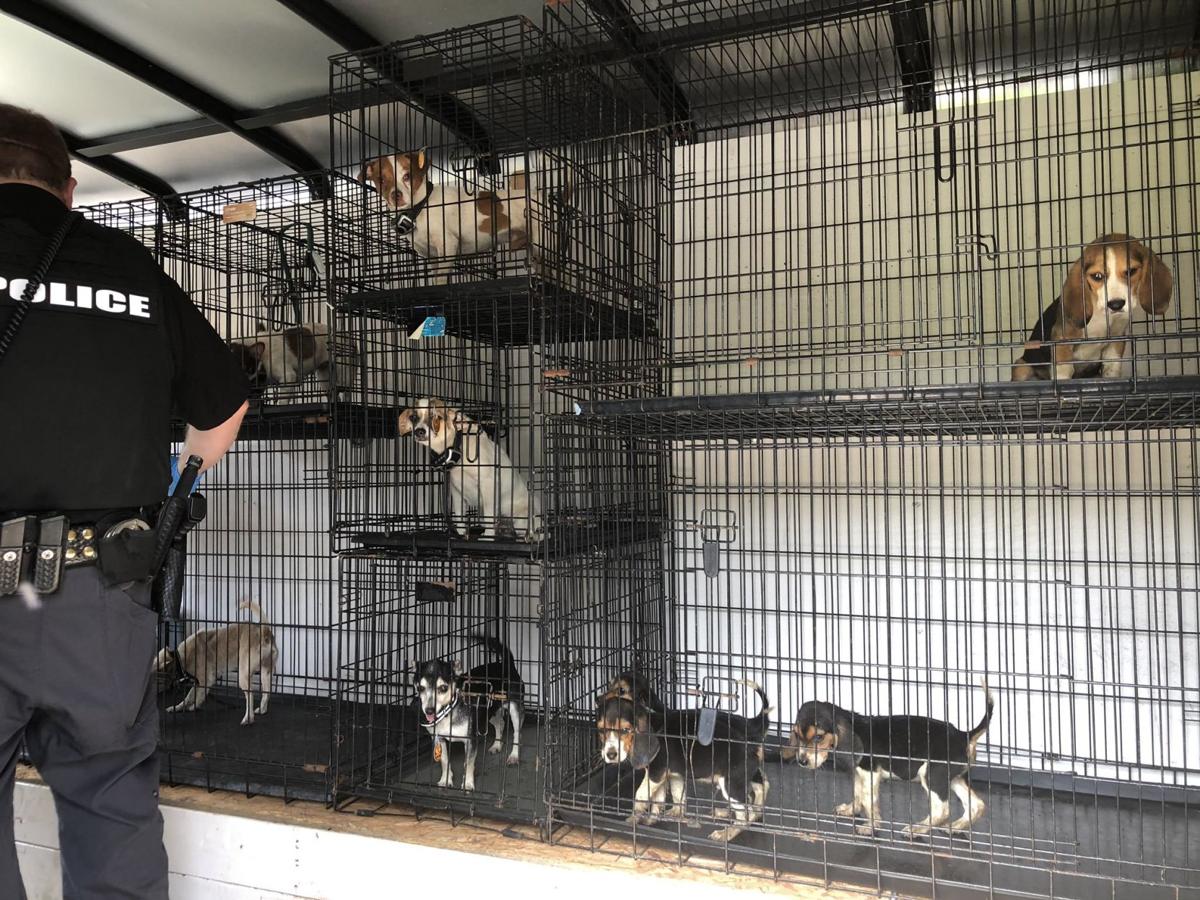 SUMMERVILLE — Some were sleepy, some were rowdy, some came with warnings they would bite — but many would be gone in a week or two.

On a recent Friday afternoon in the Petland on Bacons Bridge Road, more than 60 puppies in plastic-front cages were on display, waiting to be whisked to a new home. They ranged from small, puffball poodle mixes to a bored-looking husky sprawled across the dog bed and mesh floor of its own enclosure. A list of that day's appointments to view puppies was written on a white board by the front door, many with the customers' desired breed noted.

In other words, it was a pretty typical day in the Charleston region's only retail pet store selling puppies, which have gone for $500 to $8,000 since the franchise came under new ownership in 2018.

In August, North Myrtle Beach passed the first ordinance in the state banning the sale of dogs and cats in brick-and-mortar stores, along with a suite of other animal protections. The rule does not affect adoption shelters or independent breeders.

The small beach town of mainly retirees didn't have such a store when the law passed, but advocates said the law is a safeguard against one arriving. Two such stores exist elsewhere in Horry County, where North Myrtle Beach is located.

"Our shelters are overrun, not just in our city but all over the state," said Tina Hunter, executive director of the North Myrtle Beach Humane Society. Hunter brought the issue to North Myrtle Beach's City Council, and said the fact there was no store in town made it an ideal time to raise the issue.

"We've got to focus on stopping the problem, educating the public on what it means to be a responsible pet owner, and if they want to adopt a pet ... shelters are the first place they should look," Hunter said.

The rule isn't completely novel: California and Maryland have passed such regulations statewide, and South Carolina advocates say they are planning to push the issue in other locales. Supporters cite the existing overpopulation of dogs in South Carolina and say pushing puppies as a retail product creates an incentive for commercial breeders to pump out as many dogs as possible.

In the most extreme situations, these large-scale breeding operations are called "puppy mills," places where animals live in unsanitary conditions and aren't properly socialized with people.

But some dog buyers will always look beyond shelters, where the options to find specific breeds are limited. A representative of Petland Summerville argued that retail bans don't eliminate abusive breeders, and said the store closely screens the breeders it does use.

"Our store does not support puppy mills and has worked on a national level to increase breeding and buying standards," Lauren Petz, a spokeswoman for the local franchise, wrote in an email.

Petz said the Summerville store has a standing invitation to partner with any adoption group that wants to collaborate. But 11 Lowcountry animal groups said last year they were cutting ties with the store because of its puppy sales.

Kim Almstedt, executive director of Dorchester Paws, said the store owners have offered financial support but that she turned them down.

"We're not here to be bought," she said.

It's not the first time the franchise owners, the Parker family of Atlanta, have run into controversy at one of their locations.

One store in Sarasota County, Fla., shuttered this summer after the settlement of a long-running lawsuit over that county's pet store ban, according to the Sarasota Herald-Tribune; the store relocated to adjacent Manatee County. And a federal lawsuit is still pending, filed in April by an employee of the Parkers' Petland Mall of Georgia store and her family. The suit alleges the employee was sick for weeks after being infected with a bacteria from puppies sold at the store.

No answers have been filed in court; Petz declined to comment on the litigation. She did say the stores regularly check up on their breeders.

"Our team visits, evaluates and films our breeder facilities in person. If a breeder does not pass the Petland evaluation system, the relationship does not progress, or the breeder is placed on a do not buy list," Petz wrote in an email.

There's another problem to consider, said Kelsey Futeral of the S.C. chapter of the Humane Society of the United States: Petland is importing animals from out of state when there are many dogs in South Carolina that already need homes.

Almstedt said Dorchester Paws has seen record-breaking animal intake numbers of late, with 500 more animals in the shelter right now than at this point last year. In one case, an owner surrendering their dog said they'd purchased it at the Summerville Petland.

Petz denied that the store contributes to animal overpopulation.

The North Myrtle Beach ordinance, while novel in South Carolina, is limited. Hunter, of that city's humane society, said she knows that banning stores won't stop "backyard breeders," a world of people breeding dogs without oversight and often offering them for sale online.

Futeral said many counties have their own rules barring roadside puppy and kitten sales, but "because it can be so much more difficult to address dogs that are sold online, most communities are really steering clear of that."

In the few cases they're revealed, the conditions from these breeders can be dramatic.

Kimberly Shular, 53, of Loris, was arrested by Horry County police in May on 18 felony counts of animal mistreatment. Police recovered 30 dogs from her property, all of which were dehydrated and had fleas. Four tested positive for the highly contagious and often deadly parvovirus, according to police.

A bill filed last year in the Statehouse could address the issue of backyard breeders, at least in part. South Carolina has no regulations on dog breeders now, but House Bill 3086 would create standards and inspections for breeders with 20 or more female dogs of reproductive age. It exempts people breeding dogs for show and sport.

The bill has stalled, however, not advancing since being referred to a committee in January.

David Hiott, chairman of the Agriculture, Natural Resources and Environmental Affairs Committee, said the bill's sponsor asked him not to advance it while they hashed out details with interested parties. One of those details may well be the number of dogs required to qualify as a "breeder."

Futeral said a lower threshold might be more appropriate.

Whether regulations are passed, advocates said, the best option for the pet population is to adopt from shelter. If someone is set on buying from a breeder, Futeral said, there is no replacement for inspecting the place where the puppies were raised, as well as their mother.

"We really want people to go and put eyes on the mom and where the puppies live," she said. "There’s no certification or designation that can take the place of a person using their own best judgment."

What to look for in a dog breeder

Buying a dog from an independent breeder can be tricky. Animal welfare advocates suggest the following if you're going to buy a dog:

1. Ask to see the conditions where the puppy was raised and ask to see the mother. If the breeder refuses, that's a red flag.

2. Ask about the mother's age and how many litters she's had. Puppies also shouldn't be separated from their mother before eight weeks.

3. For purebred dogs, research common health problems the breed faces and ask the breeder if they've done any screening for these issues.

4. A certification from the U.S. Department of Agriculture or American Kennel Club isn't bulletproof. Judge the breeding facility and health of the mother with your own eyes.