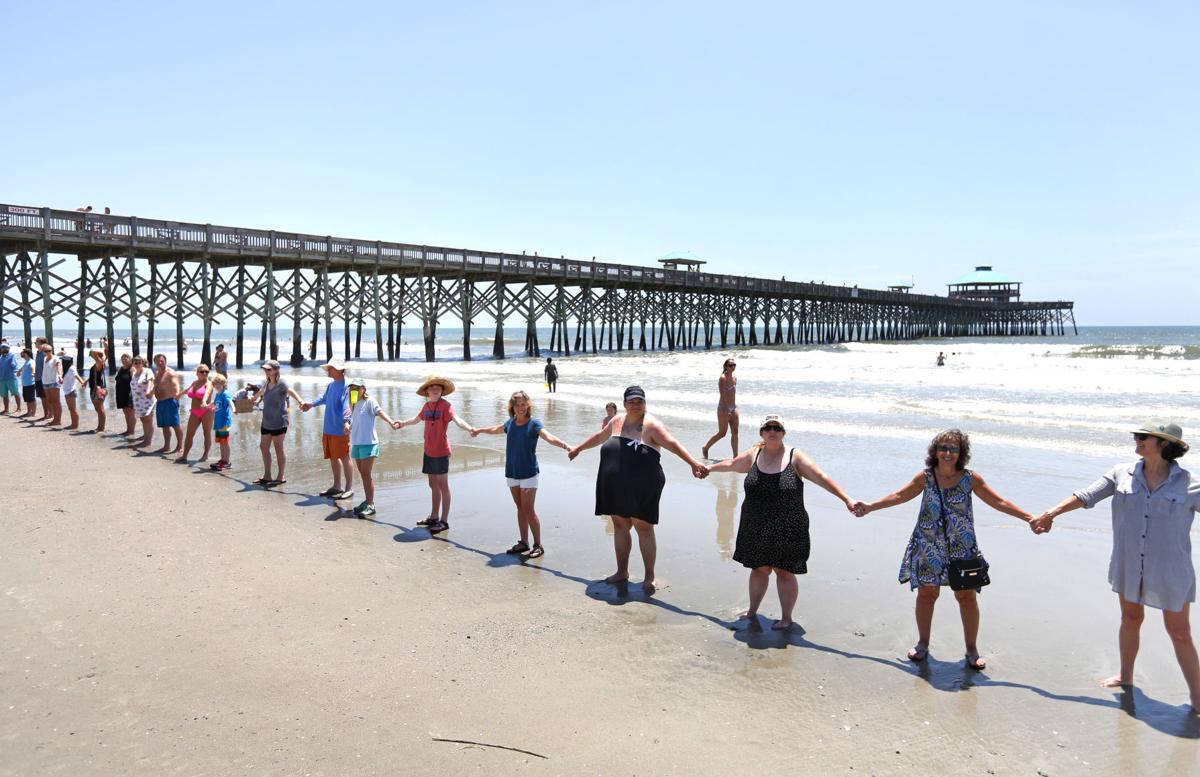 Hundreds of people joined hands to form a line near the ocean to emphasize their opposition for offshore drilling during the 8th annual Hands Across the Sand event at Folly Beach on Saturday, May 20, 2017. File/ Staff 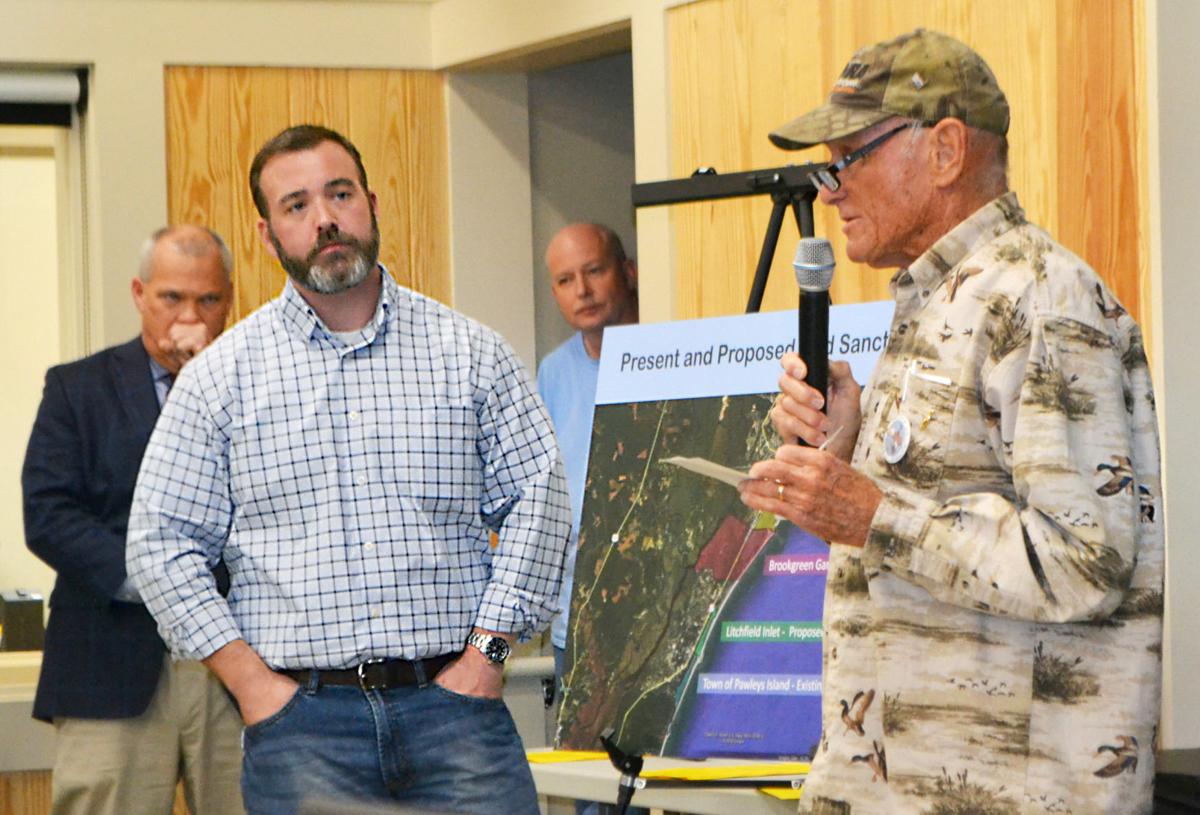 Hundreds of people joined hands to form a line near the ocean to emphasize their opposition for offshore drilling during the 8th annual Hands Across the Sand event at Folly Beach on Saturday, May 20, 2017. File/ Staff

MYRTLE BEACH — At what point would you dig up your septic tank?

It's a question that's posed often these days by state Sen. Stephen Goldfinch, R-Georgetown, as he broaches one of the more unpopular ideas on the Grand Strand: offshore oil and gas exploration.

If there were just $5 hidden under a backyard tank, he argued at a recent luncheon for the Grand Strand's Statehouse delegation, the risks would likely outweigh the benefits.

But if the tank were the only barrier to a larger sum, maybe $1 million, would it be worth it?

“We are foolish if we don’t find out at least what’s out there," Goldfinch said of seismic oil and gas testing. "We’ve got to know what we have out there, and then we can have an informed debate.”

Goldfinch stands in the face of almost universal coastal opposition to oil and gas development off South Carolina's shore. Officials from the Grand Strand — the state's epicenter of tourism revenue — are plagued by memories of dramatic spills like what a BP oil rig leak created in the Gulf of Mexico in 2010.

Rather than cowing to pressure from environmental groups and the powerful coastal tourism industry, however, Goldfinch recently doubled down. He testified before Congress in October that oil and gas jobs could help revitalize Georgetown's waterfront and has called for a statewide referendum on offshore drilling.

He argues there's a silent contingent of people along the coast that supports the oil and gas industry coming there, telling The Post and Courier that environmentalists and anti-drilling groups are a "loud, squeaky minority."

Seismic testing has regained prominence after President Donald Trump's administration paved the way for oil and gas exploration in the Atlantic Ocean earlier this year. Five companies have applied to test the waters, and all of the applications include areas off South Carolina's shore.

The administration is expected within days to announce a replacement for the Obama administration offshore oil and natural gas leasing plan from 2017 to 2022. The Obama plan kept Atlantic waters closed to leasing. The Trump plan, to run from 2019 to 2024, is expected to open the waters.

Paul Gayes, a coastal geologist with Coastal Carolina University, said that surveys done in the '70s and '80s showed relatively little oil and gas in the Atlantic. But a new survey could find different results.

"With the newer technology and the modern-day or present-day approach to geophysics, its highly likely you'll see that see that number expand," Gayes said.

In November, Goldfinch argued in favor of the testing before a state House task force. The month before, he testified in a congressional hearing that an oil or natural gas industry could help areas with high poverty and unemployment.

"Offshore drilling is no silver bullet, and certainly poses risk, but to the people in Georgetown, Andrews and Conway, I’ll bet they’re willing to take that risk,” he said at the hearing he attended at the invitation of South Carolina Republican U.S. Rep. Jeff Duncan, who represents the Upstate area around Laurens, Greenwood and Anderson.

Georgetown County averaged a 5.9 percent unemployment rate from September 2016 to October 2017, according to the Bureau of Labor Statistics. That's a few points above South Carolina's average in that span. In the city of Georgetown, a London-based company has been negotiating for months to buy and restart a steel mill, but the deal has still not been finalized.

Still, up and down the Grand Strand, including in Georgetown, cities, towns and counties and other lawmakers have passed or signed resolutions opposing oil and gas exploration. Mayor-elect Brendon Barber said the oil and gas industry posed too much of a risk to marine life.

"We're at a point now around the globe where it's necessary that we support our marine life in all our oceans and seas, because it plays a strategic part in our environment," Barber said.

Horry County Council Chairman Mark Lazarus worried that seismic testing could disrupt fish populations crucial to local commercial fishermen. The overwhelming response he receives across the county is in opposition to drilling and exploration, he said.

State Rep. Lee Hewitt, R-Murrells Inlet, represents much of the same area as Goldfinch's Senate district. He said voters frequently thank him for his opposition to drilling.

"Every single county and municipality within my district has passed a resolution opposing it," Hewitt said.

Gayes, the CCU professor, questioned whether committing to carbon-based energy was wise, as climate change continues to push a trend in sea level rise around coastal areas.

"Take a visit to Galveston and see if that's the way you want to go," he said.

College of Charleston political scientist Gibbs Knotts said that while South Carolina is a conservative state, environmental concerns hold particular sway because the state depends on its natural landscape as a tourism draw.

"It's sort of basic Representation 101: You don't want to get too far out of step with the interests of your district," Knotts said, adding that offshore oil and gas development is "dangerous for (Goldfinch) to talk out about."

Goldfinch, who is an avid angler and frequently mentions his experiences fishing around rigs off the Louisiana shore, is not shy about clashing with other environmental groups. He recently butted heads with the influential Coastal Conservation League over legal tactics that can stall development, saying the groups that use automatic stays to stop roads and other projects are not engaged in "true environmentalism."

His support for seismic testing has lately made him a target for Stop Offshore Drilling in the Atlantic, which has led the charge against the oil industry in Horry and Georgetown counties.

JeanMarie Neal, of SODA, said she was shocked Goldfinch has advocated for seismic exploration.

"(Other voters) would literally stop me and say 'Oh that betrayal, we can hardly wait until he comes back up for re-election.' And these were people who voted for him last time," she said.

Goldfinch won his seat in 2016 after Ray Cleary left the office. He raised nearly $250,000 in that cycle, according to campaign finance records, and slightly more than $5,000 came from oil and gas interests, according to data from the National Institute on Money in State Politics.

He said that amount of money is not enough to influence his decision-making, and that he would not accept donations from oil and gas companies from now to 2020, when he next faces an election.

"I will not be beholden to anybody on that issue, except for the people of South Carolina and my constituents," Goldfinch said. "The moment that I do not perfectly represent them, they can send me home. That's what they do."