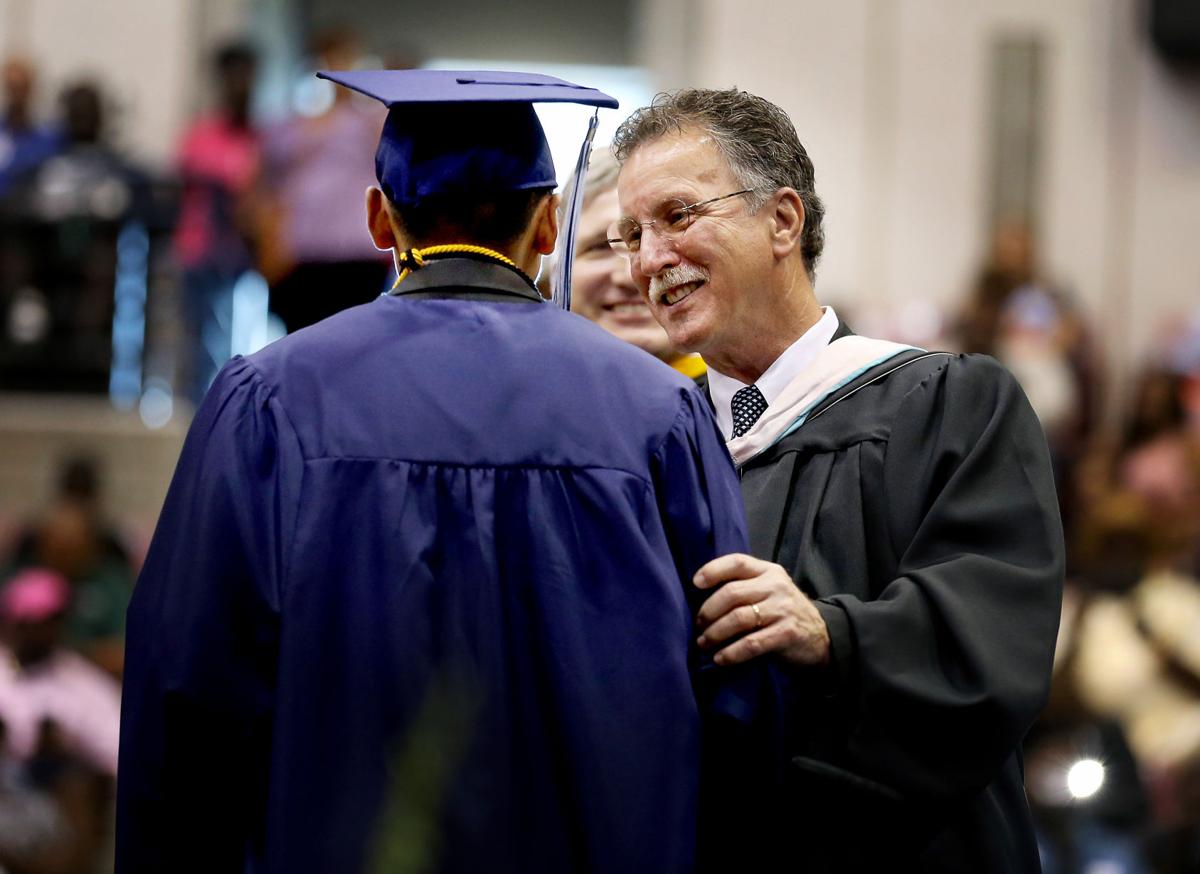 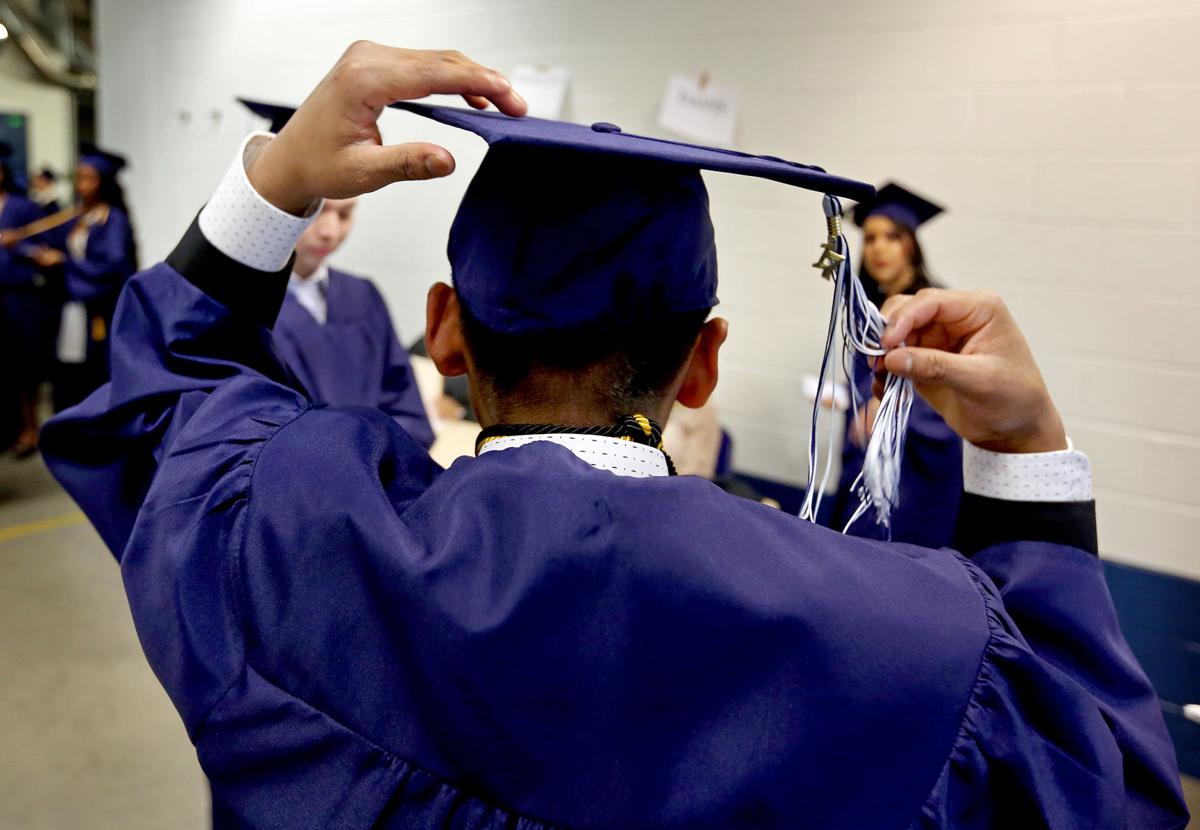 Marino fixes his 2017 tassel on his cap before the R.B. Stall High School graduation on Wednesday, May 31, 2017, at the North Charleston Coliseum. Grace Beahm Alford/Staff

Marino fixes his 2017 tassel on his cap before the R.B. Stall High School graduation on Wednesday, May 31, 2017, at the North Charleston Coliseum. Grace Beahm Alford/Staff

The night before graduation, Marino was wracked with nerves.

He called one of his teachers at R.B. Stall High School, Maria Royle.

"Mom," — that's how he addressed the self-titled matriarch of Stall's English for Speakers of Other Languages program — "I’m too excited," he said. "I can't sleep."

Marino, 20, has a toothy smile and dark hair that he parts to one side. Until three years ago, he never imagined a future where he would complete high school, tasseled cap on his head, diploma in hand. In Guatemala, where Marino grew up, high school is prohibitively expensive for most families, and Marino's mother, a seamstress, couldn't afford to pay for her children's education.

At 16, Marino faced an impossible choice: After he was forced to withdraw from school in the 10th grade, he could stay in Guatemala, where he would be destined for a life of struggle and destitution. Or he could risk everything and make the 1,500-mile trek to the United States. If he survived the journey, he might never see his mother or three younger brothers ever again.

In 2014, Marino was one of 68,541 unaccompanied minors who crossed the Rio Grande Valley into Texas, part of an unprecedented surge of undocumented children from Central America, many fleeing gang and drug-related violence.

He left Guatemala on January 10, 2014, and arrived in Texas nine days later, mostly traveling through a network of buses and taxis arranged by "coyotes," people paid to smuggle others across the border. From Mexico City to the Texas border, he hid in the back of a meat trailer. Then he trudged across the desert for five days, battling hunger and dehydration, frigid temperatures at night and blistering heat during the day. He feared capture — or worse, death.

In Texas, Marino was apprehended by Immigration and Customs Enforcement agents. He spent a month in a detention center before a family acquaintance in North Charleston, feigning as his uncle, agreed to take him in.

While Marino's case is known to federal authorities, he remains anxious about his future and his place in a society that's often hostile to undocumented immigrants. The Post and Courier agreed to withhold his last name to protect him from additional scrutiny.

When Marino arrived at Stall High School in February 2014, he didn't know a word of English. He couldn't say "hello" to his teachers, ask for directions to the bathroom or tell the cafeteria workers whether he wanted chocolate or plain milk.

Last school year, Royle, his ESOL teacher, noticed he sometimes fell asleep in her class. As he nodded off, Royle would gently touch his shoulder and whisper in his ear.

"Is everything OK? What's going on?"

When Marino wasn't at school, he was working. His shift at a nearby Hispanic grocery store started immediately after school and ended at 9 p.m. each night. Marino often stayed up until 1 or 2 in the morning to do his homework. He was rarely absent from school, but he was always tired. Mondays were especially brutal. Sometimes, Elvia Thomas, an ESOL teacher assistant at Stall, would brew a pot of coffee just for him.

To finance his passage to the U.S., Marino's mother signed over the deed to her house to a moneylender in exchange for $10,000, the coyotes' fees. If Marino didn't pay back the loan, his family in Guatemala would lose their home.

One day, he approached Claudia Newberne, a former ESOL teacher at Stall, and asked whether he could come to school just twice a week. Not only was Marino working to pay back his debt, he had other bills for rent, electricity, food, clothes and attorney's fees. Marino's immigration case was weaving through the legal system in North Carolina — a friendlier state, he had learned, than South Carolina for undocumented immigrants.

"Your education," she said, "comes first."

Why bother going to school, students would ask Newberne, if there's no future for them outside these halls?

Family is where you find it

In a way, Stall is a harbinger of America's shifting demographic landscape. About 27 percent of students at Stall are enrolled in ESOL, a higher percentage than at any other high school in the Charleston County School District.

Most of them are Latino. That percentage was closer to 10 percent when Newberne started teaching English language learners five years ago. Now, she says, Stall enrolls 60 to 100 new ESOL students every year.

Meanwhile, Stall has adapted to this influx of Spanish-speaking students: Today Stall has four ESOL teachers, a bilingual parent advocate and a bilingual secretary in the front office.

Newberne, a native Spanish speaker, was promoted to an assistant administrator. The morning announcements at Stall are often read in both Spanish and English. This past spring, the high school hosted a Quinceañera for a group of girls whose parents couldn't afford one for them, complete with a DJ, make-up artist, poofy dresses and a professional photographer.

This year's valedictorian, 18-year-old Alejandra Gonzales, is a proud, college-bound undocumented immigrant from Mexico. She'll attend Wake Forest University in the fall on a full-ride scholarship.

So perhaps fate led Marino to Stall High School, where he easily made friends and his teachers could act as his surrogate parents. Eric Sykes, an ESOL teacher, raised money on GoFundMe to buy Marino a laptop for Christmas. Royle gave him a couch to sleep on. Newberne checked in on him at the grocery store each summer.

When Marino received a letter from the U.S. government in January with his deportation date scheduled for March, his ESOL teachers wept with him in the hallway before rallying around him. Newberne drove Marino to see a local attorney to review his case. In March, Marino got the good news: His deportation order had been extended, his case will be appealed. He could graduate at the end of May, the first in his family to complete high school, as long as he finished all of his credits.

"This is it," Royle told Marino over the phone on Tuesday, the night before Stall's graduation ceremony at the North Charleston Coliseum. "This is your new journey."

The threat of deportation still hangs over Marino's head, but he doesn't worry as much now that he's graduated high school. He's paid back the coyotes' debt. He wants to stay here. Most of all, he wants to go to college. He'll work all summer to save money. In the evenings, he'll keep studying to improve his English. Marino is good at math; he dreams of being an architect.

If he's ever stopped by federal agents, Marino will unfold a piece of paper in his wallet, a letter from the Department of Justice, indicating that his case is still pending in court, and maybe they will leave him alone.