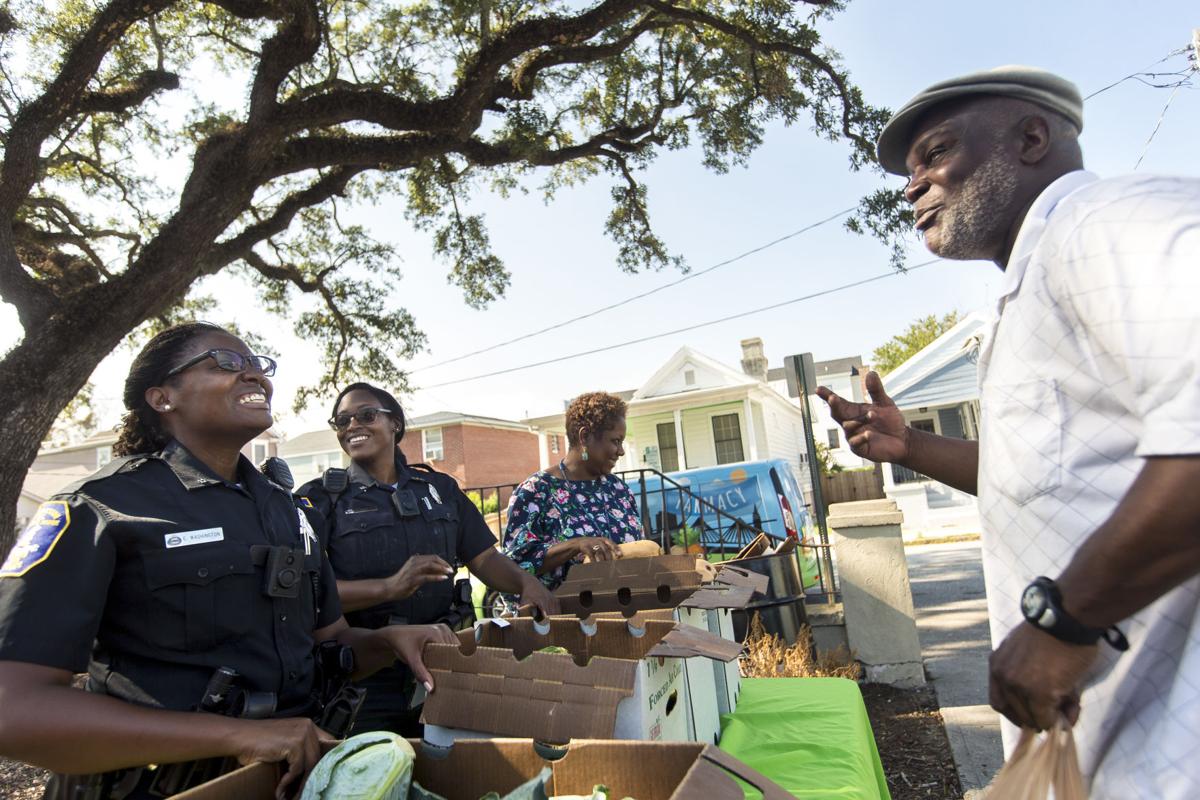 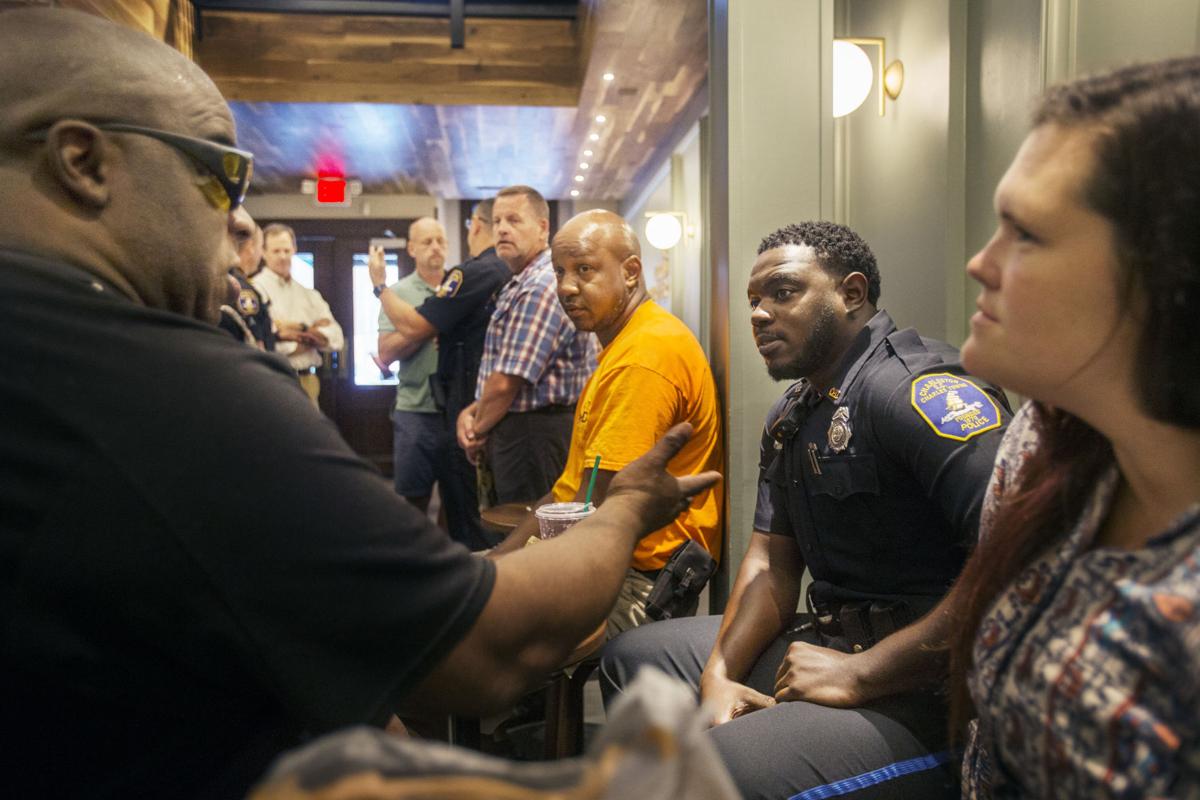 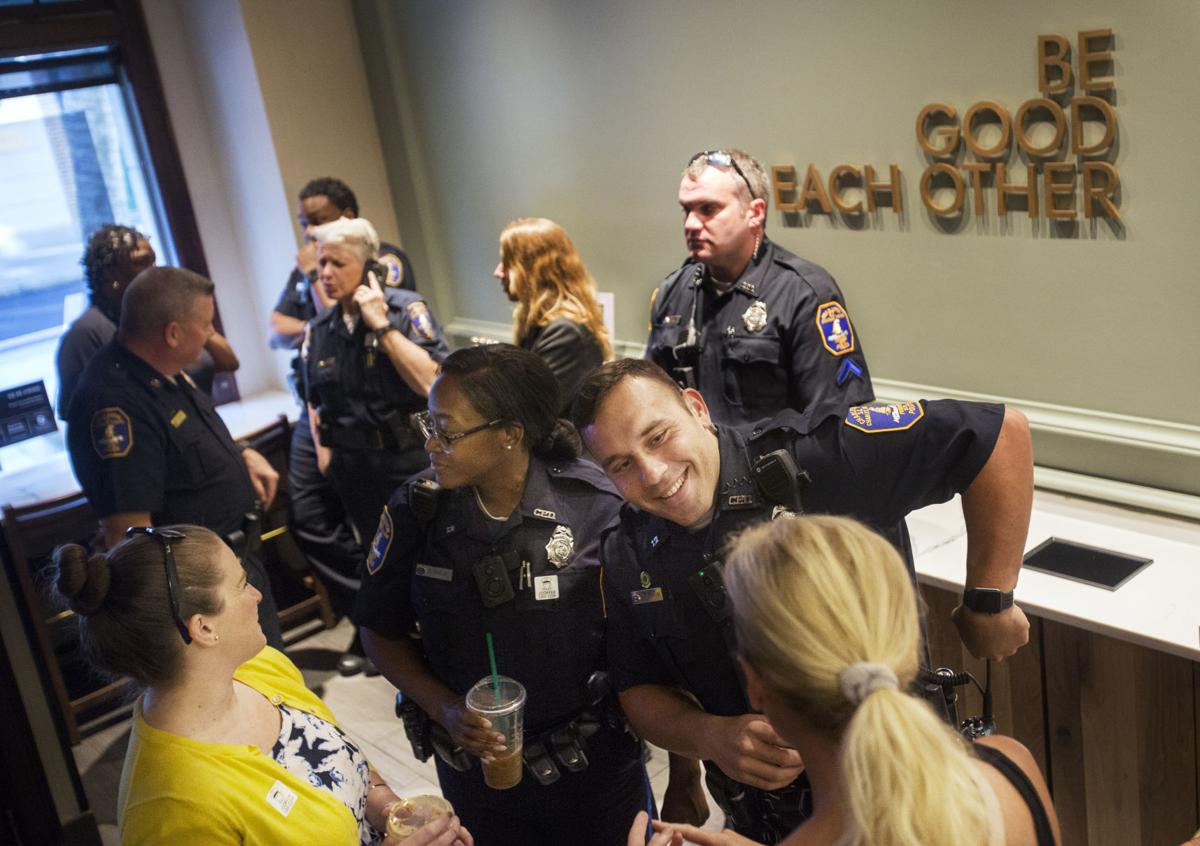 Charleston police officers gather inside a Starbucks on King Street to speaks with members of the community during their Coffee With A Cop event Wednesday Oct. 2, 2019, in Charleston. Gavin McIntyre/Staff 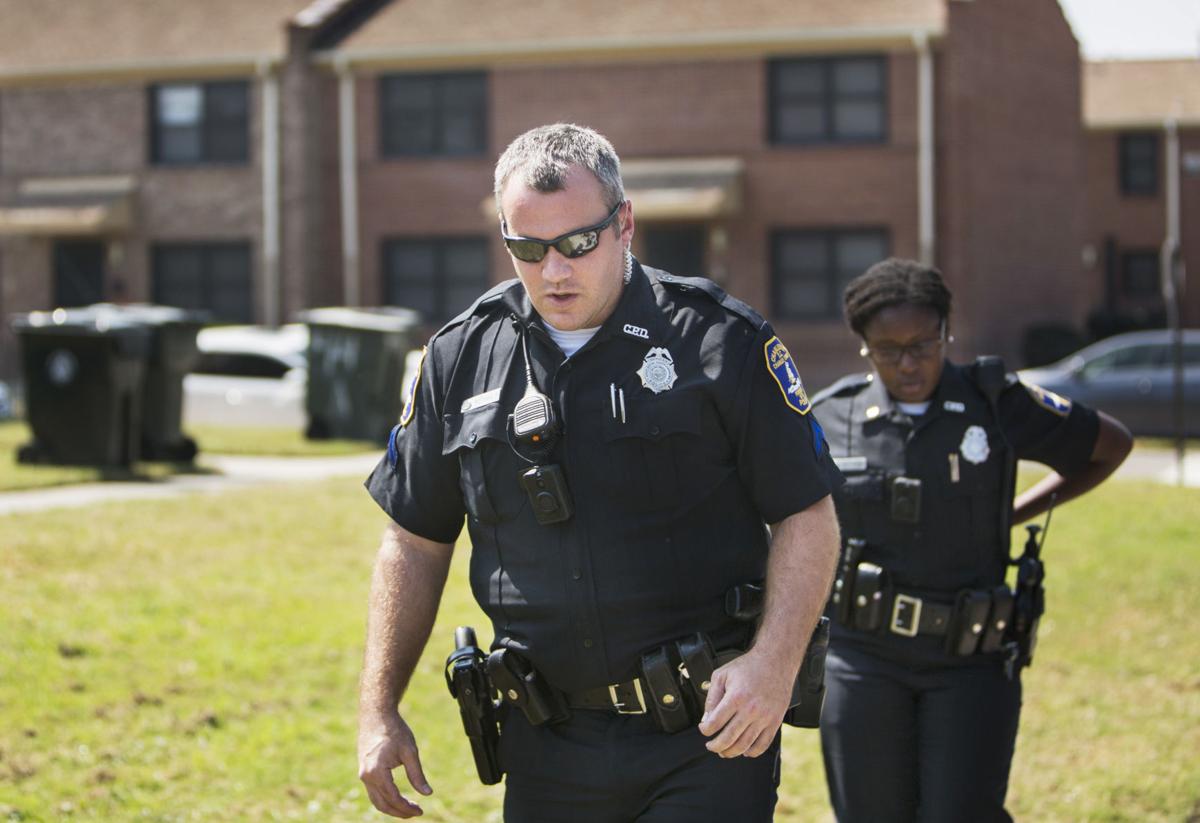 It had been three days since a long-anticipated report detailing racial bias in the Charleston Police Department was made public.

Hardly anyone was outside the store. Nearby, a man rode a bicycle with a speaker in hand, a radio commercial crackling loudly. A faded Crime Stoppers poster from 2016 nailed above the store's entrance seeks information on the beating death of Gerald Dilligard. It was cool and dark inside the store when Gault stopped to chat with the cashier.

The employee was worried. Officers came the week before to get his security camera for an investigation, and it still hadn't been returned.

"If something happens, it won't get recorded," the man said.

Gault told him he'd look into it.

For the eight-year veteran of the Charleston Police Department, it's those small moments that make up a core part of the job — developing relationships and establishing trust with the residents he protects.

Community policing, what Gault and almost 25 of his fellow officers do daily, is one area scrutinized in the 135-page audit. A draft of the probe was released Monday.

Auditors with Virginia-based CNA examined data from 2014 to 2018 in five areas: traffic stops; use of force; the department’s complaint process; community-oriented policing; and recruitment, hiring, promotions and personnel practices. The city paid $158,556 for the review, which found glaring issues with the department's leadership development, training and data analysis. It also cited racial disparities in traffic stops and use of force.

Sixty-one percent of people officers used force against were black, while 37 percent were white. The department’s Traffic Division has 20 officers. All are men, and 18 are white. Residents told auditors they want to see more officers in person or on a bike, not behind the tinted windows of a police cruiser.

In summary, auditors depicted a department that needs sweeping reforms and investment in training, and City Hall will decide what happens next.

The Charleston police audit comes after years of increased scrutiny of law enforcement nationwide. Spurred by the 2014 shooting of Michael Brown, an unarmed black man in Ferguson, Missouri, activists and politicians pushed for tougher oversight of law enforcement and use of force. President Barack Obama had the U.S. Department of Justice investigate police departments in Baltimore, Albuquerque and other cities around the country.

Locally, the North Charleston Police Department faced intense scrutiny following the 2015 shooting of Walter Scott, an unarmed black man, by Michael Slager, a white police officer. Slager was sentenced to 20 years in prison for the shooting. In 2017, a DOJ audit of the North Charleston Police Department came to an abrupt end after then-Attorney General Jeff Sessions terminated several DOJ investigations across the country.

The results of Charleston's didn't shock leaders of the NAACP, black residents on the East Side or city leaders who have heard concerns of racial bias on the police force. Work to address those misgivings has begun and is expected to continue.

On the East Side, some black residents have said they have little faith that city leaders or the Police Department will address crime and community issues in a meaningful way. After the audit's findings were released, some spoke positively about police. They are waiting for results, and they hope this is the start of something.

Mohammed Idris, a resident who attended a neighborhood meeting this week, said he hasn't read the full report, but he's encouraged by what he has seen from patrolling officers.

"I don't see the racism," Idris said. "I love working with them. I've got a picture of the first 12 African American Charleston police officers. We have come a long way."

Latonya Gamble, president of the Eastside Community Development Corp., said she's cautiously optimistic about what will happen next. She was disappointed the auditors didn't look at officer-involved shootings, but otherwise thought their work was thorough and thoughtful.

"I would like to see how (the recommendations) are implemented," Gamble said.

Sitting at a conference table a block away from where East Side residents meet, Charleston Branch NAACP President Dot Scott said she wasn't surprised about the audit's findings: It reaffirms the concerns she's heard from black residents for years.

Specifically, Scott was "surprised and disappointed" that so little was being invested into officer training. She feels it shouldn't have taken this long for the department to be scrutinized but is thankful that it wasn't prompted by a large-scale incident.

If the department sets out priorities after this audit, Scott thinks they should start with "anything that revolves around police's interaction with citizens."

"I'm very optimistic as a result that we'll see some positive change this year," Scott said. "I think there's a mindset shift that took place with this audit."

And while the audit criticized record keeping and leadership, some boots-on-the-ground officers said their efforts to meet and get to know who they protect weren't entirely celebrated.

The lieutenant in charge of a recently unified outreach division — the Community Action Team — said that while the audit gave some credit to these officers' efforts, it didn't take all their work into account. The team holds bingo games at the Ronald McDonald House, neighborhood Walk and Talks, bike giveaways, okra soup dinners and weekly farmers markets on the East Side.

"I wish they saw my schedule," Lt. Shylah Murray said. "We do so much for the community."

The audit's findings, though, pave a path for the department to move forward, she said.

As moms with strollers bustled into and out of the Starbucks on lower King Street on Wednesday, officers handed out stickers shaped like police officer badges and played their cruiser sirens.

Standing nearby, Sgt. Damien Seabrook said the department's outreach has evolved. It started out with neighborhood-specific beats, but all those officers were unified under one unit in July. They go into different neighborhoods each day.

Seabrook said the auditors gave a fair assessment of the department, but he wished he had been interviewed. He would have mentioned the city's returning lunch buddy program in schools and a reading mentorship program in the works.

After he was promoted to sergeant, it was up to Seabrook to learn how to be an effective boss. It was his discipline and work ethic that guided him, not a class or professional development requirement at the department.

Sitting at Charleston Police Headquarters on Lockwood Drive, Chief Luther Reynolds said his immediate priority is "casting a vision, as corny as that sounds."

One of the immediate priorities is training for officers promoted to new, managerial positions. Reynolds said supervisor training — "which literally we will do before year's end" — includes 16 hours of training in November.

There's also plan to work with an outside agency or a university to review and research police policies. He'll have specific line items in his budget request that pertain to audit initiatives, including new money for training and better equipment. Officers just learned how to use its existing computer programs so higher-ranking staff can collect and analyze data better. Thirteen years ago, the department didn't have computers for reporting.

Police Department reforms will be shaped through the city's budget, currently being drafted. A City Council budget workshop will take place in mid-November. City Council is expected to give its approval in December.

Mayor John Tecklenburg said there are easy tasks to address, such as formalizing policies.

"The audit found that we got a lot of information out there, but it's not organized and gathered in a way ... so that it can be effectively used for management decisions," Tecklenburg said.

He doesn't see a reason for another comprehensive audit because practices and policies will be put in place to gather and analyze real-time information.

On Friday, Reynolds met with the roughly 40 sworn and civilian members of his command staff to parse through the report. His staff was energized, not overwhelmed by the massive reforms called for.

Deputy chiefs, captains and lieutenants each took on one of the recommendations to chip away at. The department's academy training director, who has served in that role for about four months, said there wasn't anything in the audit that he hadn't acknowledged already. Again, leadership development emerged as a priority.

Questions arose: "The feeling in the room was positive, engaging and upbeat," Reynolds said. "There was a lot of dialogue about how are we going to get from here to there, how are we going to change the data analytics when there's costs attached to it? What about (crisis intervention) training?"

Friday's meeting and assignments were only the beginning. In the coming week, the rank and file will prioritize what needs to be done.

SLED: No charges against Charleston officer who oversaw arrest of man who died in custody

By the end of the calendar year, Reynolds will have a report listing all of the audit's recommendations, who in the department is responsible for addressing each, timelines for implementation, checkpoints on when to expect followups, and a status update on what's been completed.

"You don't get a report one day, a week ago, and have everything completed," he said. "It's going to be incremental. It'll involve a lot of people outside our agency, it involves the budget process, who we hire, how we train."