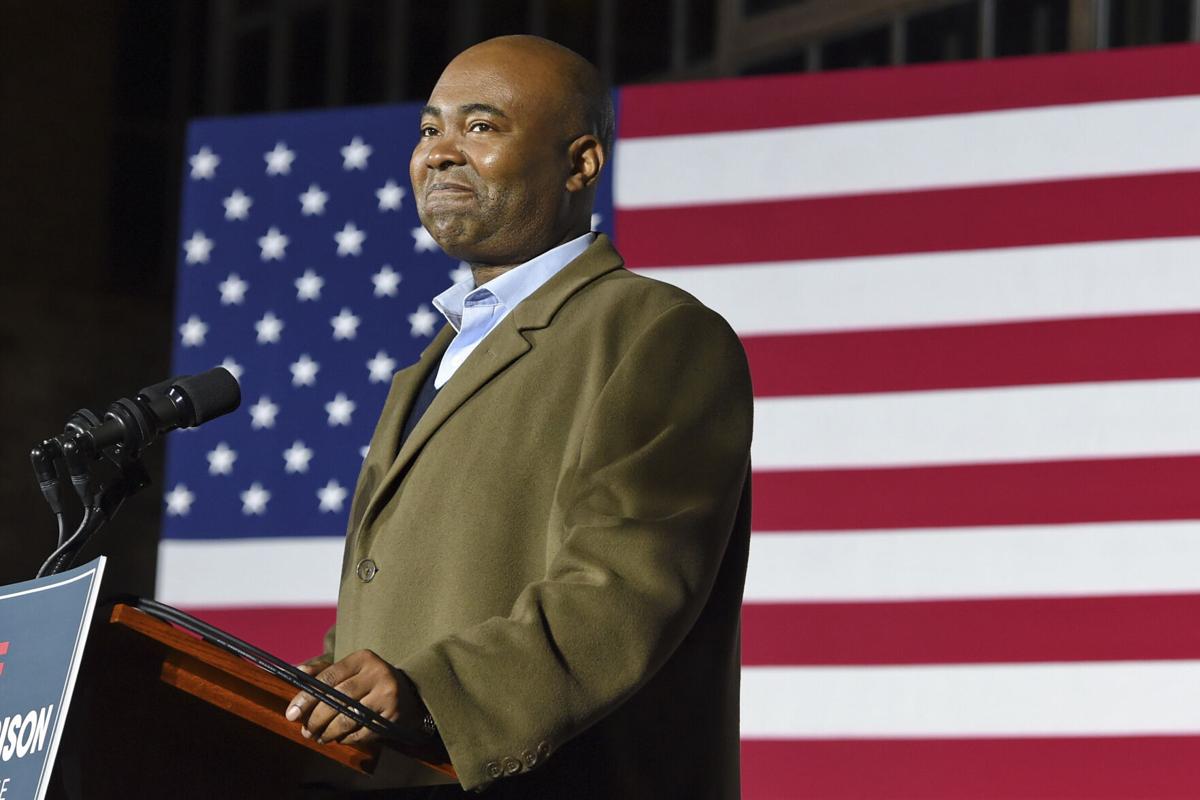 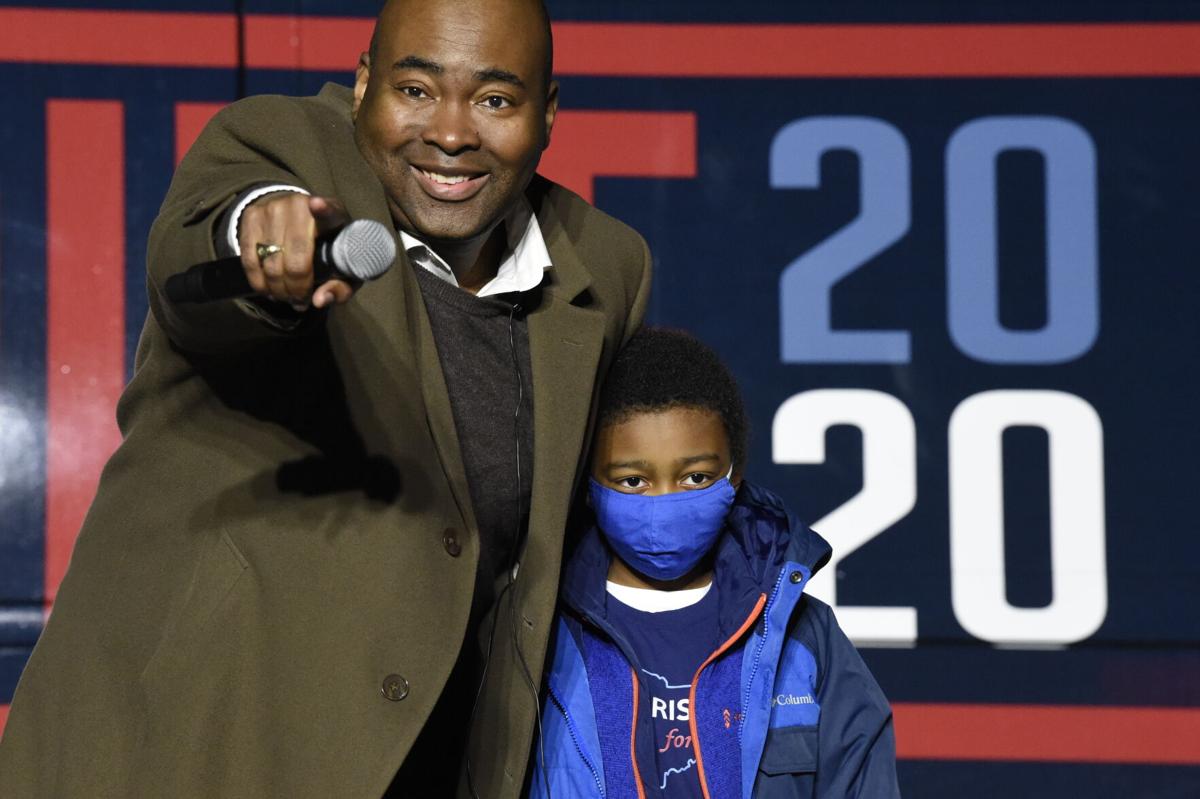 Jaime Harrison with his son William at a campaign rally in Orangeburg the day before Election Day. Meg Kinnard/AP 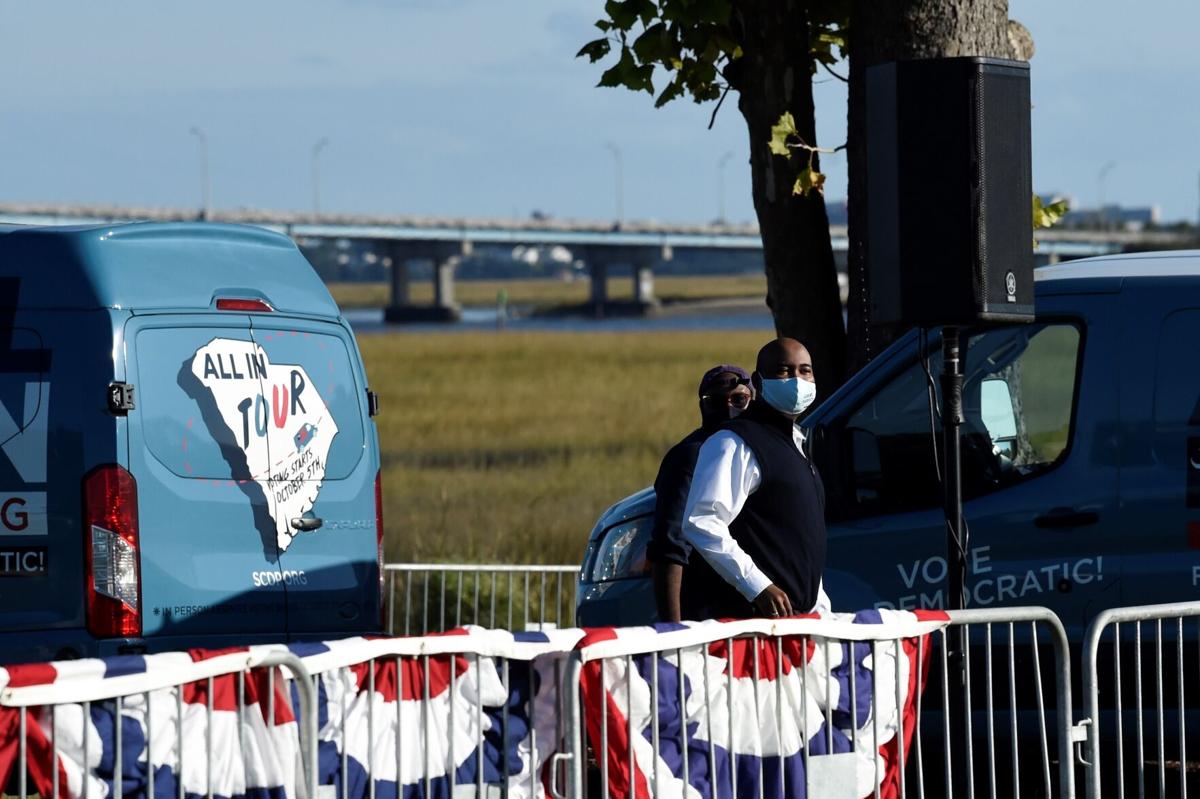 Jaime Harrison arrived at a drive-in campaign rally on Oct. 17 at The Bend in North Charleston. Meg Kinnard/AP 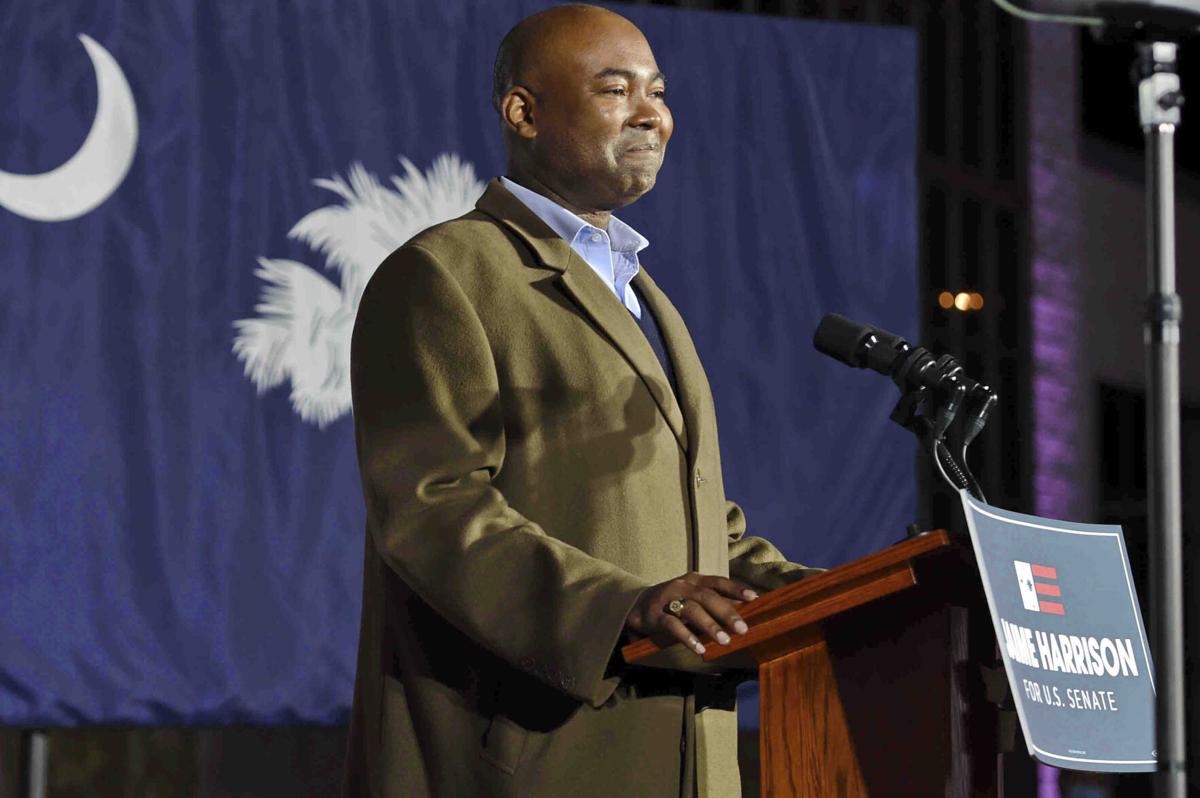 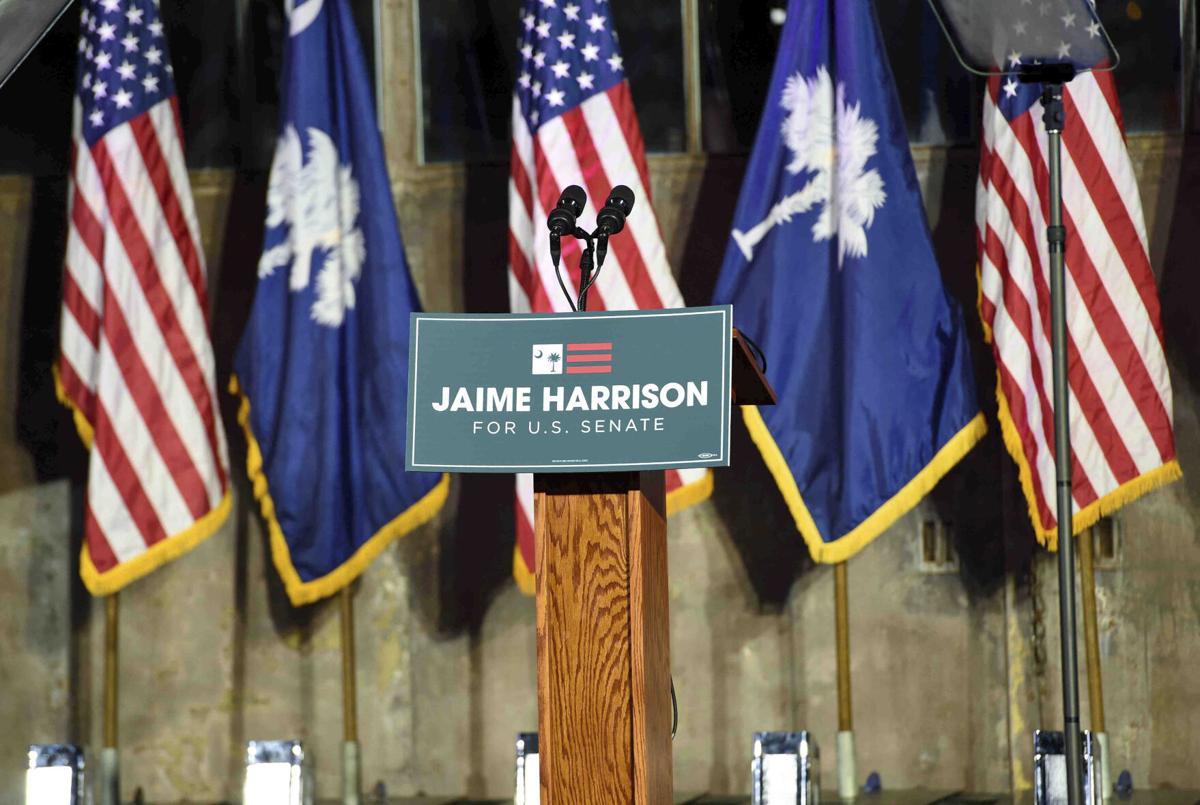 A stage is set for Democratic Senate candidate Jaime Harrison at a watch party in Columbia on election night. Richard Shiro/AP 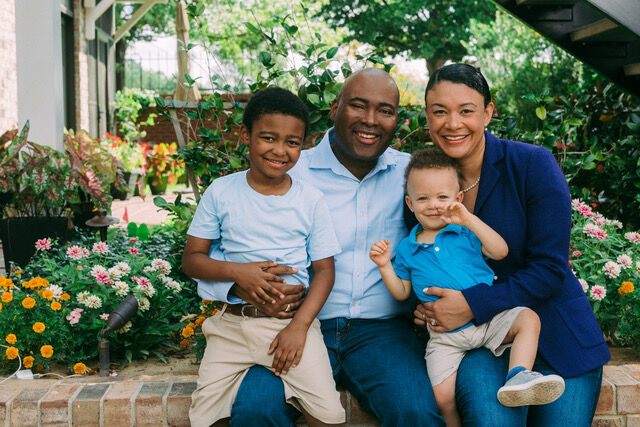 Jaime Harrison with his wife, Marie Boyd, and their sons outside their Columbia home. Kevin Lowery and Mission Control/Provided 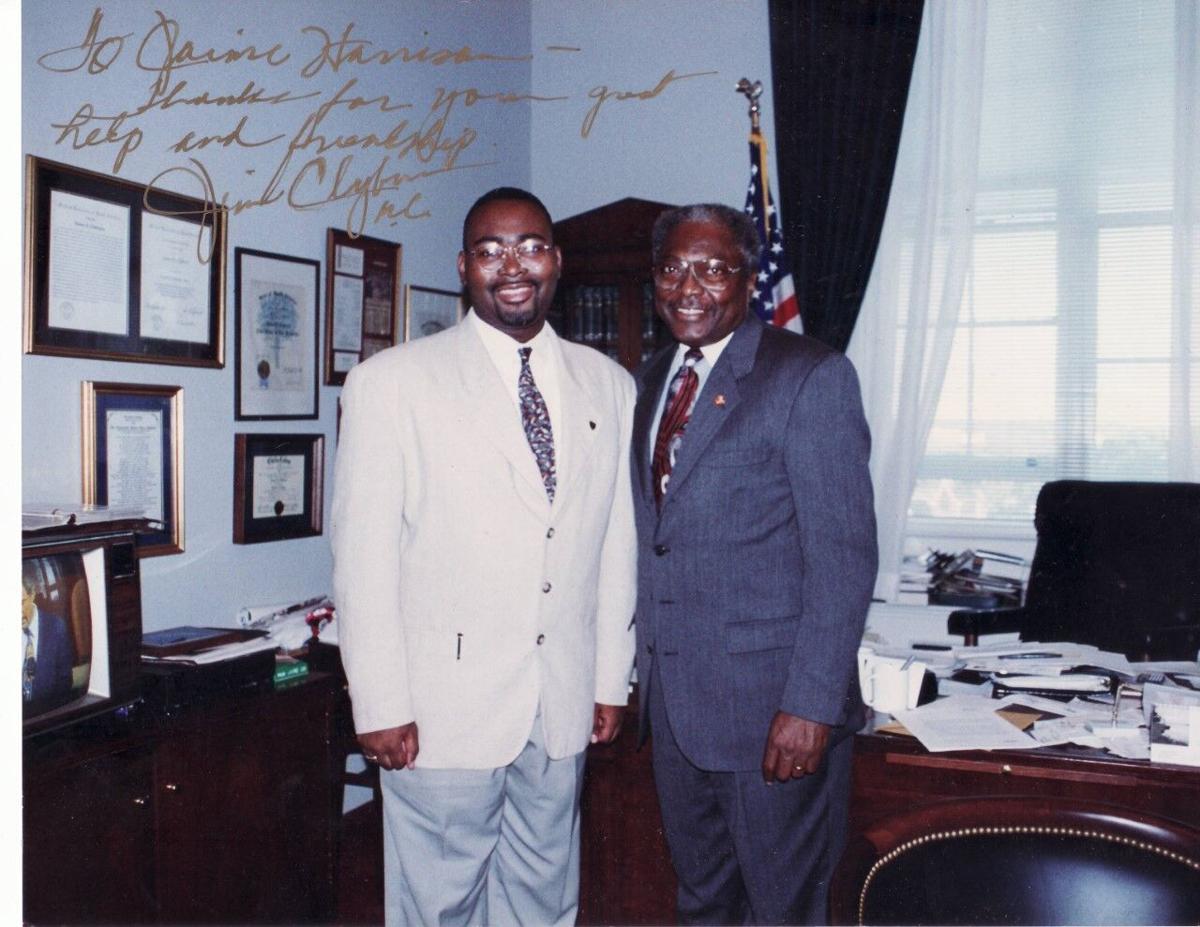 Jaime Harrison, then a college student in the 1990s, is pictured with his "political dad," U.S. Rep. Jim Clyburn. Provided

It was mid-October, 17 days before the election, when hope for Jaime Harrison's Senate race still hung thick in the air.

About 250 cars were parked at The Bend in North Charleston on land that once was a plantation. Harrison bounded onto a portable stage. Behind him, the Ashley River glowed.

He didn’t know it, but across the river sat the spot where in 1670 a fleet of English settlers landed with the first enslaved Black people brought to establish the new colony that soon would revolve around the institution.

Harrison was running for Senate during the 350th anniversary of that arrival, but during his campaign he often spoke of a New South. It would be inclusive and free from the racial disparities that still plague it.

He told his supporters to imagine a Black man getting elected to a Senate seat from a state that once elected such white supremacists as “Pitchfork” Ben Tillman, Strom Thurmond and John C. Calhoun.

Imagine South Carolina, birthplace of the Civil War, having two African American senators, a Republican and a Democrat.

“If we do this, my friends, they’ll talk about the presidential election on the front page. But the real news is going to be, ‘Oh my God. What happened in South Carolina?’”

Instead, a few weeks later, after losing to incumbent Sen. Lindsey Graham by 10 points, Harrison sat in the living room of his Columbia home on Thursday watching his 1-year-old son play with a toy bus. He tried to sound upbeat.

But really he wondered if the New South was just a far-off dream.

In July 2010, the cover of Newsweek featured a smiling Nikki Haley, then a first-time gubernatorial candidate, beside the words “face of the new South.”

But what exactly is the New South?

The term was coined by Henry Grady, a post-Civil War managing editor of the Atlanta Constitution. He used it to describe a vision for his city that pulled it from its wartime devastation by boosting new Southern industry and attracting Northern resources.

The New South, after all, cannot also be the Old South.

The Old South was built on a system that exploited enslaved Black labor, then oppressed African Americans through segregation. Persistent racial disparities emerged and continue across South Carolina today.

As Harrison told The Post and Courier, “For me, the New South — and often I used that riff — it was bold and inclusive and diverse, one where the anchors of racial inequities and the lineages of the Old South, the things that I believe kept us back from progressing, no longer kept us separated.”

Those disparities, he added, impede movement from Old South to New.

Two years ago, a Post and Courier investigation called “Minimally Adequate” detailed gaping racial disparities in the state's schools. South Carolina is home to some of the nation's best and worst schools, split largely by race and income — and that gap is widening. Black students are far more likely than whites to attend the state’s most-struggling schools.

Then, just last month, the newspaper reported a decline in infants’ deaths in South Carolina. But that improvement came exclusively among White babies. The gap widened between White and Black infants.

On the campaign trail, Harrison emphasized that 14 of 46 counties don't have a single OB-GYN. He pointed to children in rural areas who lack internet access.

“It makes you scratch your head," he said. "Is that America, or something you hear about in a Third World country?”

In her first inaugural address, Haley departed from the old, familiar Lost Cause narrative to remind South Carolinians that “the horrors of slavery and discrimination" remain "a part of our history and a part of the fabric of our lives.”

Throughout her tenure, she emphasized her key talking point: a promising future for all meant recruiting new jobs. The New South must come with a new economy.

Huge industries like Boeing and Volvo in the Charleston area and BMW and Michelin toward Greenville led the charge into a vibrant economy, at least pre-coronavirus.

But those cities are poles in a sea of considerable need. Twice as many Black families as White ones live in poverty across South Carolina, according to the U.S. census. And White and Black voters cast ballots that largely reflected that divide.

CNN’s exit poll of the Senate race found that, among voters who supported Graham, 81 percent said their family’s financial situation was better than four years ago.

In comparison, 90 percent of Harrison’s supporters said it was worse.

The outcome left Bakari Sellers, an attorney and CNN commentator who grew up in rural Bamberg, pessimistic about the Palmetto State's role in the New South. South Carolina lacks the higher education and economic engines of cities like Atlanta, Charlotte and Raleigh-Durham.

“The New South isn’t here yet,” Sellers said. “The demographics haven’t gotten here as quickly as they should.”

Forks in the road

Spend a moment with Harrison’s backstory to understand how disparities hinder progress.

Part of his story is familiar. He was born to a single teen mom, raised by grandparents who, during segregation, could access only a fourth and eighth grade education. He did homework by candlelight when the power got cut off.

Harrison himself went to a mostly Black, underperforming high school. While there, however, he got letters from colleges whose admissions offices liked his SAT scores. One came from Yale University, inviting him to meet a staffer coming to the state.

It was the early 1990s, and Harrison longed to see more of the world. So, he borrowed his grandfather’s brown 1978 Ford LTD and hit the road to Columbia. A rubber band secured the broken trunk latch.

When he arrived, the Yale counselor wowed him. “That’s where I want to go,” Harrison thought.

Yet others discouraged his dreams. They didn’t want him to be disappointed. Students from his high school didn't go to Yale. Nobody in his family had even gone to college.

Harrison applied anyway. What if he hadn't?

On April 2, 1994, he got home from school and opened the mailbox. In the stack, one envelope had big blue letters on it: YALE.

Yale suggested a personal loan, but nobody in his family had good enough credit to get one.

The late state Rep. Earl Middleton stepped in. He gave Harrison a job that summer to earn the money.

What if he hadn’t?

During his freshman year, he struggled with the rigorous coursework enough to seek out tutors. Fear of inferiority gripped him. The students around him had attended the best private schools. Some were children of millionaires. They seemed so very polished.

“I felt like a Walmart kid on Rodeo Drive,” he said.

What if he'd given up?

He got involved on campus and discovered his leadership skills. He had political knowledge and instincts that could compete with the best.

Later, he would go on to serve as South Carolina Democratic Party chairman, join a powerful lobbying firm and work in the nation's capital with U.S. Rep. Jim Clyburn, D-S.C., the House majority whip. From his office, where he shared a wall with the late congressman John Lewis, he could look out his window straight down the mall.

But after graduating from Yale, he returned home to teach ninth grade social studies at his former high school. One of his students couldn’t find South Carolina on a map. The child had barely left Orangeburg.

In that moment, Harrison saw every fork in the road he'd taken, every disparity that persisted in South Carolina.

“It’s why opportunity is so important," he said, "and why resources and exposure are so important."

'The New South has taken hold'

To Rob Godfrey, who was for years Gov. Nikki Haley’s communications chief, the New South is “absolutely an idea that’s alive and well in South Carolina.”

The fact that Harrison was such a viable candidate — and likely will be so again, if rumors he'll run for Clyburn's seat one day prove true — “is a testament that the New South is something people are buying into.”

Godfrey pointed to a decade of strong economic development. After the Emanuel AME Church massacre, he was with Haley when she called for removing the Confederate flag from the Statehouse grounds.

He blames Harrison's loss more on nationalization of the Senate race. The general election became focused on President Donald Trump and the Supreme Court vacancy, which helped Graham, the Senate Judiciary Committee chairman.

Apart from the presidential candidates, “He became the most important political person in the country," Godfrey said. And Harrison could do little to change the fact that South Carolina is a conservative state where most voters wanted another conservative justice on the high court.

Concerns over racial disparities fell to the wayside.

But, in the end, voters' choices in the South Carolina Senate race tracked in tandem with the presidential contest.

Jordan Ragusa, political science professor and associate chairman at the College of Charleston, woke up bleary-eyed after a late-election night to teach his class on presidential politics.

To him, the New South will require a competitive, two-party system in which Black voters will vote for Republicans — and White Republicans will support Black candidates.

That didn’t happen this time. About three-quarters of Whites apparently voted for Graham, while 92 percent of African Americans voted for Harrison, CNN's exit poll found.

“The politics of race is still very salient in the South," Ragusa said. "It’s very much an identity and not as much an ideology thing."

Voters also remained deeply split over racism. CNN exit polls found that more than half of Harrison’s voters deemed racism in the U.S. important. In contrast, 95 percent of Graham’s supporters considered it only “a minor problem."

“I didn’t see a lot of evidence of any kind of New South political coalition coming about this political cycle," said Gibbs Knotts, political science professor and dean of the College of Charleston’s humanities school.

That left state Rep. Gilda Cobb-Hunter, dean and matriarch of the state’s Black caucus, frustrated. A fellow Democrat from Orangeburg, she doesn't see a New South without a widespread effort to address racism and disparities.

“There is so much division,” she said, “and the whole move for social justice scared a lot of White people. Period. I don’t get any joy out of saying that, and wish I could figure out what to do about it.”

She added, “But that’s an issue White people are going to have to solve.”

If they don’t, she fears, the next generation will stay stuck in the same conversation, and the Old South won't soon disappear.

An unlikely ascent Love, loss, loyalty, law shape his brand of retail politics Last in polls, last in debates. How long does he go on?