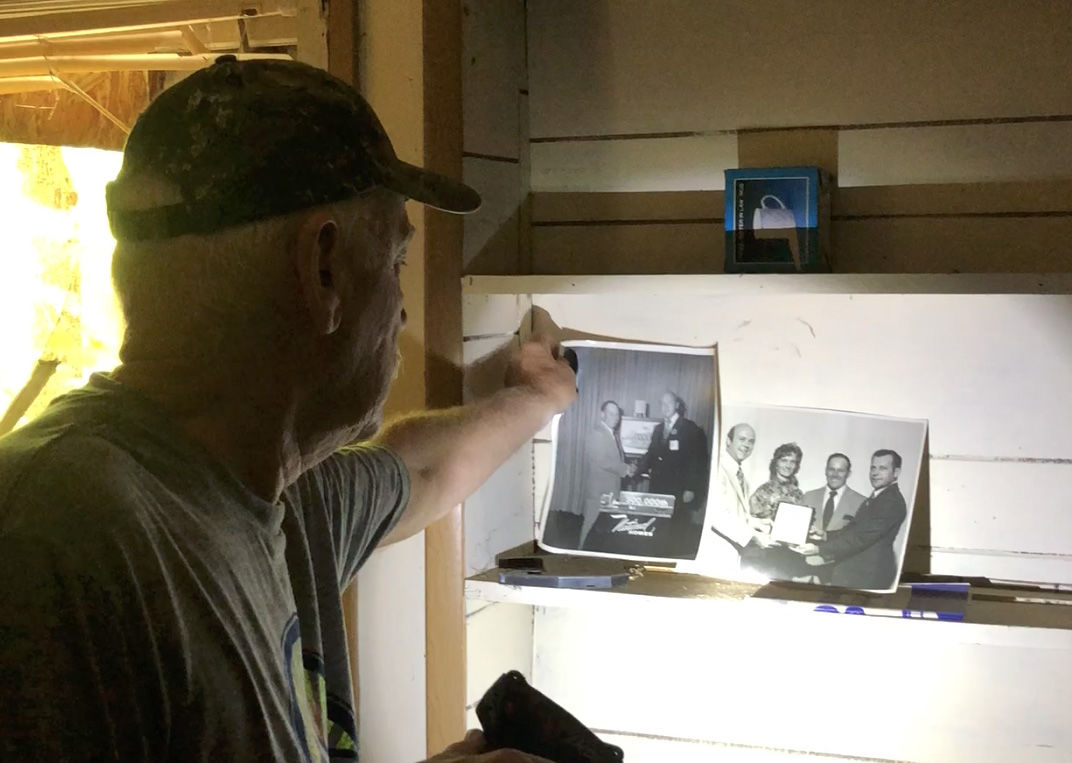 The McCord's interest in purchasing the Bixby house at a tax lien sale was met with with shock and amusement. Michael Majchrowicz/Staff 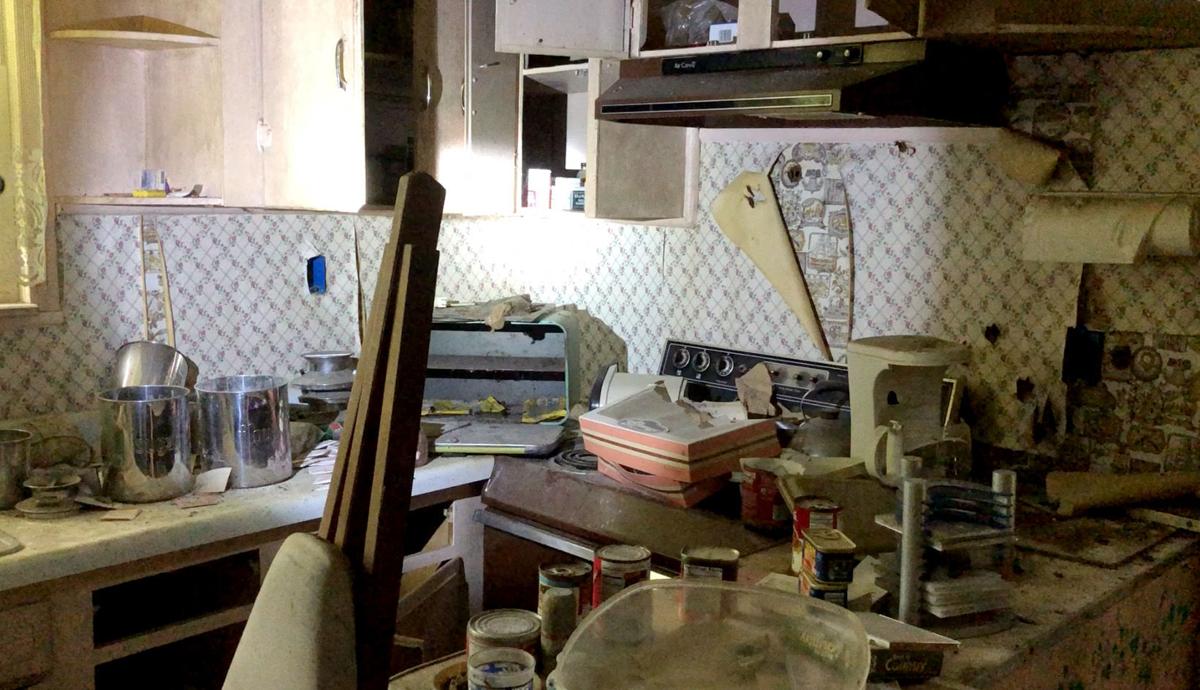 Nearly two decades after the shootout, the Bixby House will soon be torn down. Michael Majchrowicz/Staff 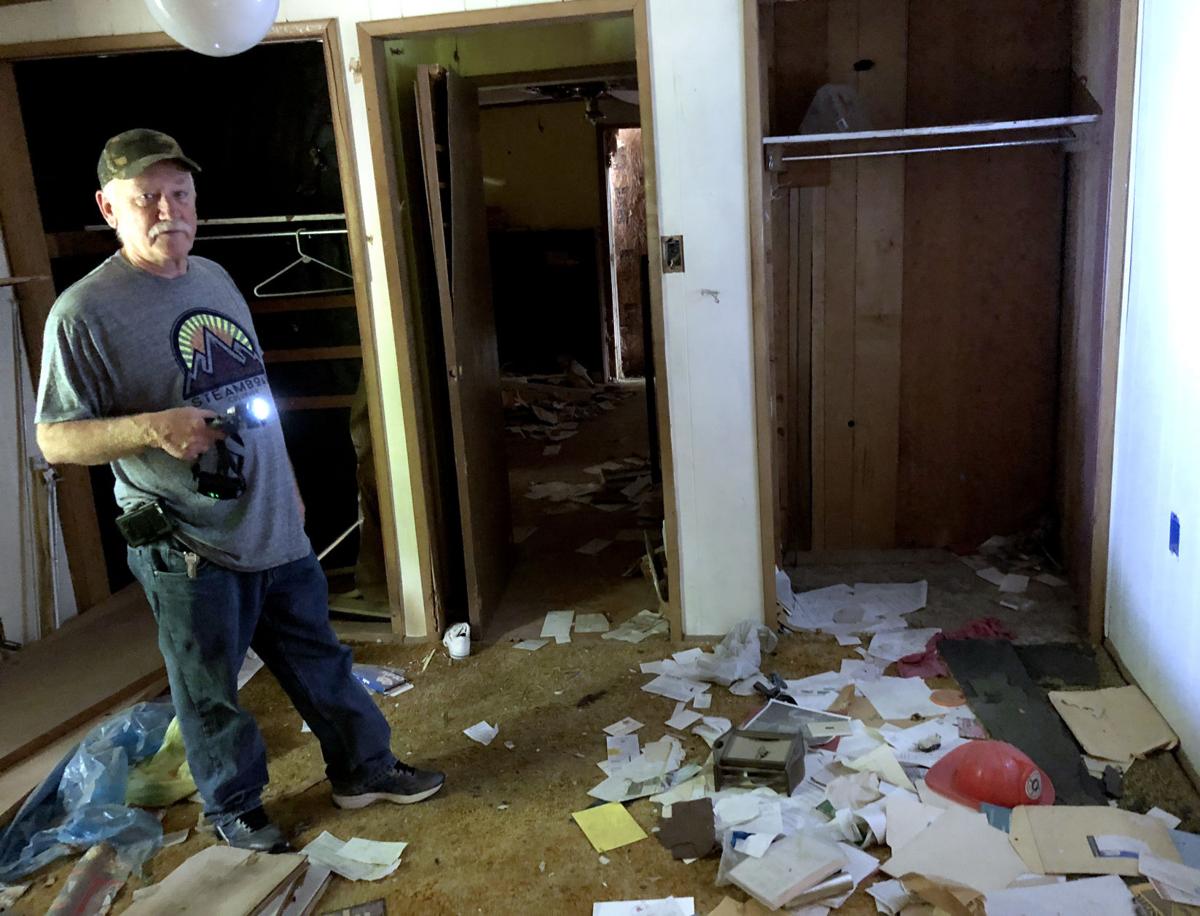 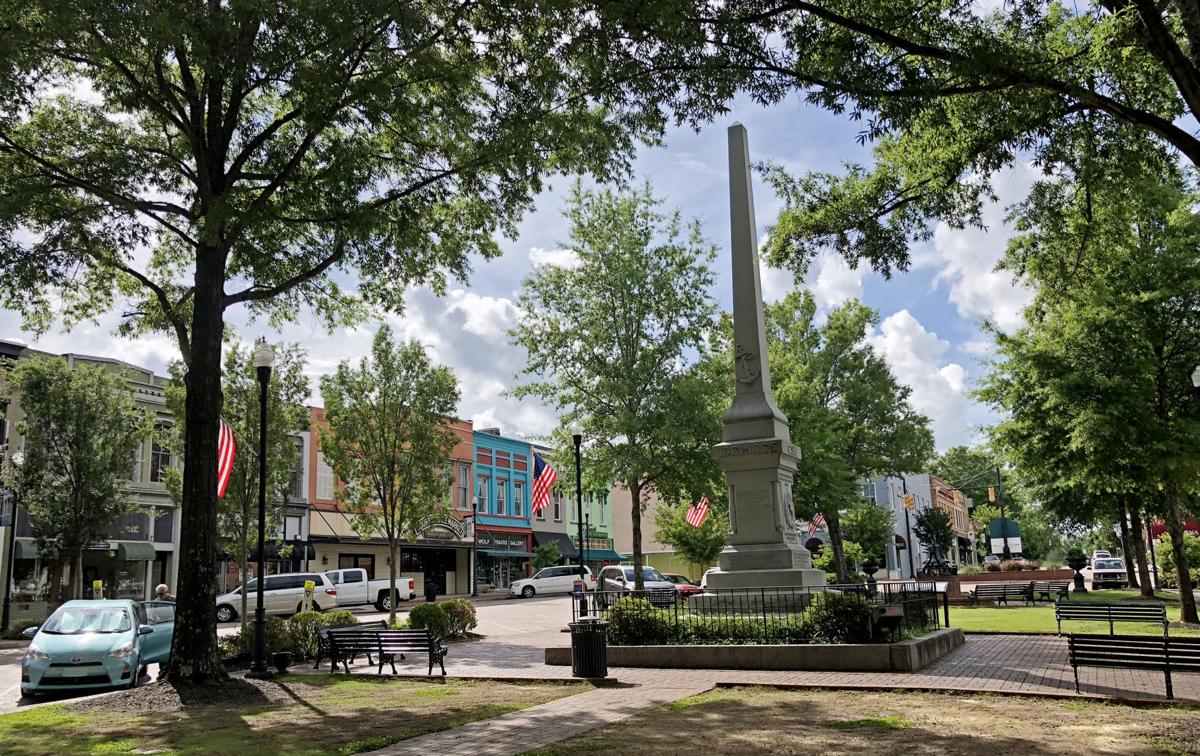 Abbeville, with its roughly 5,000 residents and downtown red-brick roadways is about 90 miles west of Columbia. Michael Majchrowicz/Staff 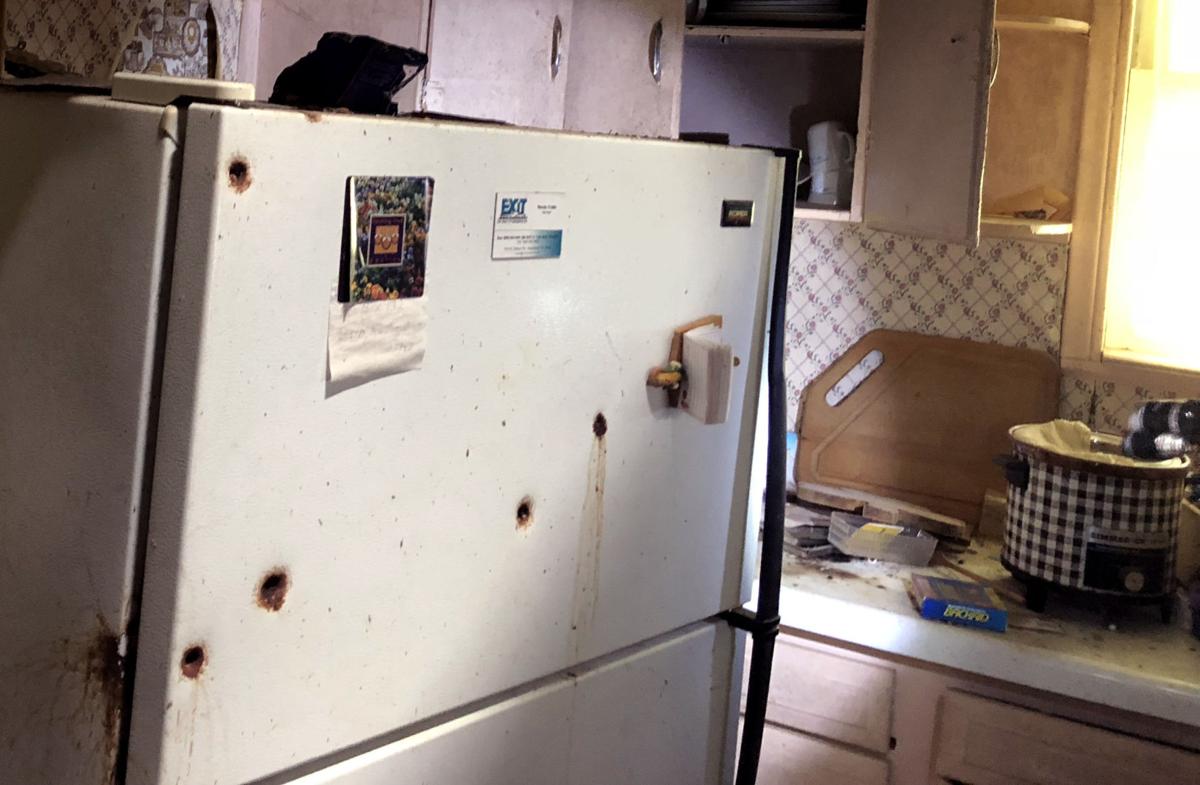 Bullet holes are visible from the armed standoff prompted after Steven Bixby and his father shot and killed two officers there the same day. Michael Majchrowicz/Staff 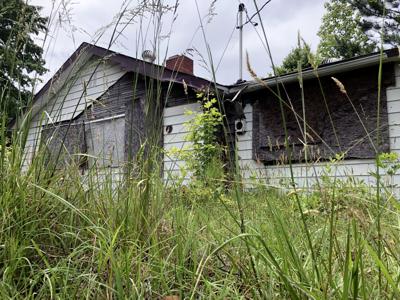 ABBEVILLE — The decimated house on the edge of town remains untouched, and time has not been kind to the forsaken property.

Inside, sunlight pours through bullet holes that pierce the walls and siding. The wooden floors — rank with decay — sink with each step. Dirt and soot saturate the carpet, if you can call it that anymore. Plates and dishes remain stacked in cabinets; debris and plywood litter the floors. In a closet, the skeletal remains of a dog.

The Bixby House, as it's called here, is frozen in time.

That's the time the clock hanging in the kitchen showed when a bullet tore through it as gunfire rained on this house during one of the longest shootouts in South Carolina history. The more-than 12-hour armed standoff between law enforcement outside and the family inside was prompted after Steven Bixby and his father shot and killed two officers there the same day.

Since then, Abbeville has wondered over the fate of the house, a ceaseless reminder of the town's darkest day.

Richard Bobo, a lifelong resident, has owned a house next door since before the shooting. “It ain’t nothin’ but death,” the 69-year-old said. “These memories ain’t never gonna leave with it standin’ there like that.”

Now, nearly two decades after the shootout, the Bixby House is about to come crashing down.

The sign welcoming you to Abbeville, with its roughly 5,000 residents and downtown red-brick roadways, says plenty about this small, rural town in the Upstate, about 90 miles west of Columbia. “Pretty near perfect” it says.

The Bixby House is tucked away off Abbeville’s main drag along S.C. Highway 72, which stretches from one end of the county to the other. It’s a central thruway that feeds to downtown and connects Abbeville to the neighboring towns of Greenwood and Calhoun Falls.

The front of the Bixby House has all but disappeared in a sea of weeds, garbage and stray shingles. To out-of-town visitors, the house is easy to miss. But to those who call Abbeville home, the house is inescapable.

“I pass it two or three times a week,” said Charles Goodwin, who was sheriff at the time of the shootout. “I’ll be going fishing that way, on my way to see friends, paying bills.”

You’d be hard-pressed to encounter someone here who hasn’t heard of the Bixby House and the family who lived there. Even if you aren’t well-versed with the particulars, you know something horrible happened.

Like the 17-year-old server at Theo’s, a deli on Main Street, who offered a nervous smirk at mention of the house.

“That’s where the two cops got shot,” her parents once explained as they drove by.

On that day in December 2003, Abbeville Police Det. John Smith was at the station when the call came over the radio. An officer was down.

Smith sped toward 4 Union Church Road. There, in the lawn, was state constable Donnie Ouzts’ body. The detective knelt by him and felt for a pulse. Ouzts was already gone.

As backup arrived, Smith left for the sheriff’s office about 2 miles away, which had been set up as the headquarters. From inside the building, as the shootout raged on at the Bixby house, Smith could still hear in the distance what sounded like a firefight. He thought of his days serving in Vietnam.

Earlier that morning, sheriff’s Deputy Danny Wilson, 37, had shown up at the house to talk to the Bixby family who lived there about a right-of-way property dispute. Earlier in the week, one of the men in the house chased state transportation workers off the property.

Steven Bixby and his father, Arthur, believed — despite assurances from state transportation officials — that bureaucrats wanted to acquire a portion of their land for the sake of a highway expansion. The roadway project would take away a corner of the front yard, but the Bixbys were told they would gain yardage elsewhere.

As Wilson approached the home, the younger Bixby gunned down the deputy, dragged him inside, handcuffed him and left him to die.

A state constable, Ouzts, 63, was shot when he responded to the property to check on Wilson after he didn’t return from the initial call. At least 12 hours of back-and-forth gunfire ensued between the Bixbys and law enforcement.

Steven Bixby would eventually be convicted of the murders and remains on death row at Kirkland Correctional Institution. His parents, Arthur and Rita, were convicted of accessory-related charges and both died in prison in 2011.

These days, Smith doesn’t mince words when speaking of the Bixby house.

“Tear it away,” the retired detective said, “and put it in a trash pile where it belongs.”

Samuel and Angie McCord listened as the auctioneer rattled off the list of properties. Before she read one of the addresses, she paused and seemed to tense up.

“The next property coming up,” the auctioneer told the crowd at the local civic center, “I know no one wants to buy it.”

It was the Bixby house.

The McCords were the only ones to enter a bid. When they spoke up, the 40 or so people around them at the sale reacted with shock and amusement.

“You could tell the crowd got upset for someone bidding on it,” said Samuel McCord, 67.

The McCords attend tax lien sales on a regular basis and have invested in several properties. It is a hobby of sorts.

Their minds were made up about the Bixby house.

"There’s nobody that’s gonna tell me what I can and can’t buy. This is a free country,” Samuel, who was raised in Abbeville County, said. “In the back of my mind, I knew I wanted to do something to get rid of the house.”

The total assessed value of the home stands at $280, county records show.

Recently, Samuel and Angie sat down with county officials to sign over the deed to the property so that it may be demolished.

“It took us a while to get here,” said David Garner, who became county director last year. “But now that we’re here, we’re moving fast.”

Garner said no date has been set for the demolition, but he expects the house to come down in June or July.

Seemingly everyone wanted a piece in bringing down the Bixby house, Garner said. There were contractors offering to raze the house free of charge and others who volunteered their time to help clear what would be left behind. A “culture of cooperation,” he called it.

“We try to rid ourselves of the things that remind us of those memories,” Garner said.

Until last year, Samuel and Angie mowed the lawn at the Bixby house, tended to the weeds and trimmed the shrubs and trees that now loom over the broken home.

But after five years, the McCords came to a stark realization: most people they knew wanted nothing more than for this eyesore of a house to cease to exist. The McCords’ upkeep on the property was only making it more visible. So they stopped and let the weeds grow up to hide it again.

The interior of the house is no better off. Rotted floor boards, scattered mail from tax collectors, canned food across counter tops and inside the pantry. Explainer books about individual rights and novels about rebellion collected dust on shelves — titles like “Your Rugged Constitution Book” and “Huckleberry Finn.”

On a recent visit to the house, Samuel picked up one of the books.

"It's got a bullet showing there," he said.

It had hardly been six months since Joanne Wilson Johnson, 60, lost her brother in the Bixby house standoff. A job opportunity came up in Columbia, so the Abbeville County woman leaped at the chance to leave behind one of her life's greatest tragedies.

“My brother was the pillar of the community,” she said. “Even though he was a police officer, he was a friend to whomever needed a friend. He was never a stranger to anyone.”

Johnson makes the drive back to Abbeville County every week to visit family who still live here. She's committed the drive to memory and is acutely aware of when she's about to pass the Bixby house.

As the house comes into view through the windshield, Johnson looks away and prays for strength. Bringing the house down, she said, has been a long time coming.

“That’s the best thing that’s ever happened,” she said. “It don’t solve anything — it just helps take away the pain of rehashing the memory of having to deal with this over and over again.”

Johnson said she has no plans to attend the demolition. All she wants is a spot where she can visit her fallen brother.

After the Bixby house finally falls, gone will be the bullet-riddled vinyl and shattered glass and overgrown weeds. Just a wide-open acre of land that many hope will house a memorial.