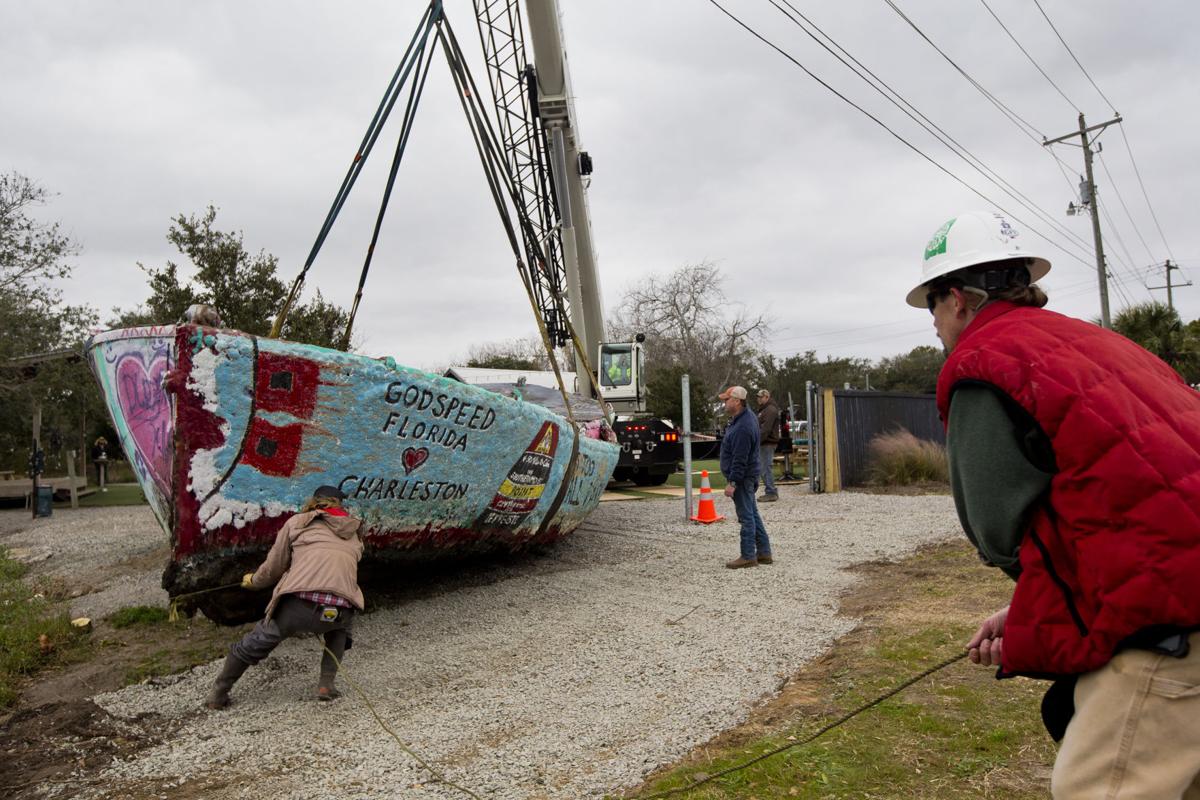 The Folly Boat, an iconic Charleston-area landmark, was moved to its new home at James Island bar The Barrel on Thursday, Dec. 12, 2019. The boat was washed up beside Folly Road by Hurricane Hugo in 1989 and became an unofficial community billboard, where people would paint messages. It remained at the location until 2017, when Tropical Storm Irma washed it away and into a nearby dock. Andrew J. Whitaker/Staff 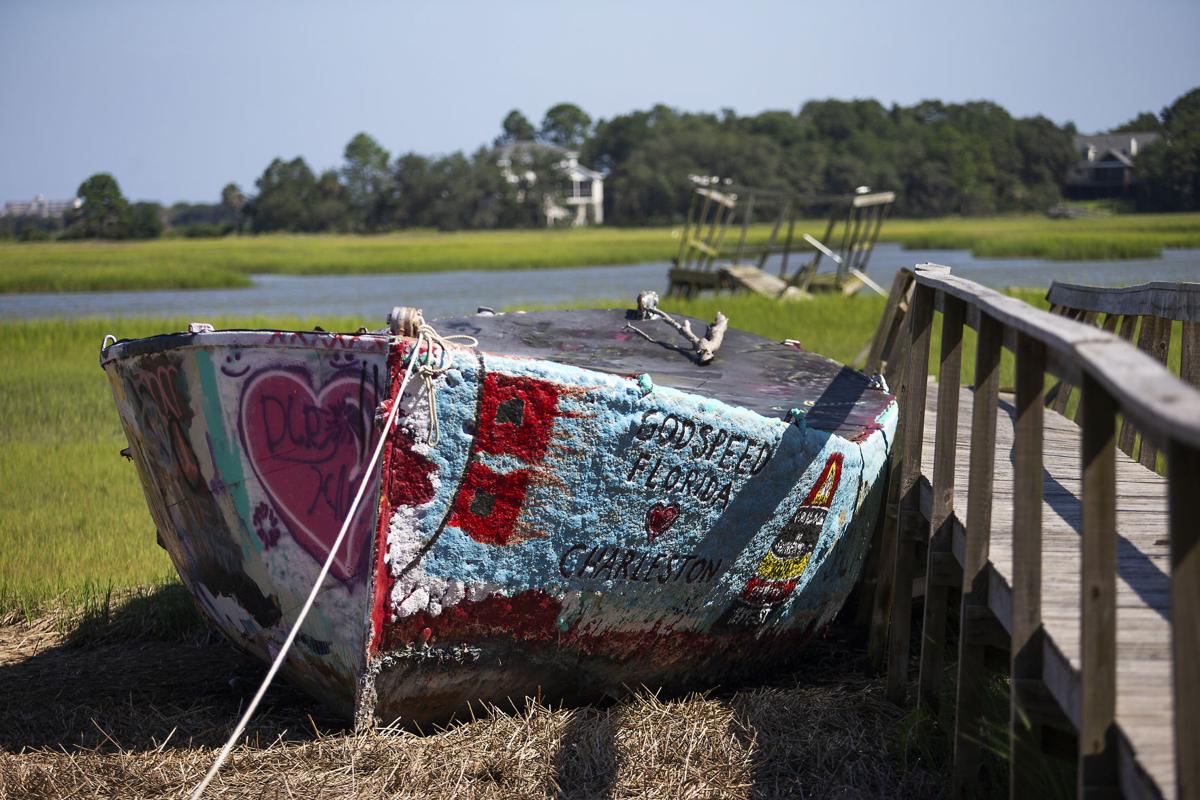 The Folly Boat rests beside Chris John's dock on James Island on Wednesday, August 8, 2018. The boat was carried away from its location on Folly Road after Tropical Storm Irma in 2017. Lauren Petracca/Staff

Crews with Limehouse & Sons used a crane and a flatbed truck on Thursday to move the boat from the marshy resting place, where it had languished since September 2017, to The Barrel on Folly Road, said Chad Reynolds, the bar's owner.

"It couldn't have worked out any better," Reynolds said. Everything went flawlessly."

The boat will now form part of the bar's fence, he said. While it is on private property, it will be both visible and accessible from Folly Road.

Reynolds said he hopes the move will help restore the boat to its place as a symbol of Folly Beach and the Lowcountry.

"It's the Folly Boat," he said. "It's not my boat. It's everybody's that's traveled here. So many people have painted that boat."

Work began around 10 a.m. and wrapped up around 4 p.m., Reynolds said. He thanked Limehouse & Sons, who donated their time, equipment and personnel to move the 50-foot vessel for free.

The project could not have been completed without help, including from Folly Beach City Council, the city Department of Public Safety, Aspen Fencing, Eric Draper of Save the Folly Boat, and others, he said.

In the decades after Hurricane Hugo swept the Folly Boat to its former resting place next to Folly Road in 1989, it became a sounding board for the community — painted and repainted with political slogans, declarations of love and other messages.

Folly Boat, a Charleston icon, washed away by Irma 28 years after it was washed ashore by Hugo

But in 2017, Irma swept the boat up and crashed it into Chris John's dock where it remained, future uncertain, until Thursday.

The boat weighs at least 20 tons, according to estimates by engineers John hired, and is made of steel and filled with cement.

The process of re-creating a landmark that has exemplified Folly Beach’s funky, close-knit vibe dragged on for more than two years and sparked public debate over whether the boat should even be moved at all. Many were passionate about the boat's future and an online fundraiser generated $2,550 toward finding the boat a new home.

But efforts to move it to another spot along Folly Road required complying with a long list of conditions put forward by the S.C. Department of Transportation. The process appeared to have stalled.

30 years after Hugo and floated again by Irma, the Folly Boat still stuck in the marsh

Afraid that the boat would end up in a landfill if nothing was done, Reynolds said he decided to act.

He began meeting with John and others in September. About three weeks ago, the bar owner decided to set a date for Friday.

"I thought it would be fun to do it on Friday the 13th," Reynolds said.

But concerns were raised over possible conflict with Folly Beach's Christmas parade, which is scheduled for Saturday, and he bumped the move date up.

"Now it's essentially the same as what it was before," Reynolds said. "So many people care about this boat. Nobody wants to see it go to the dump, and that was the next step. All this kind of came together."

A year after Folly Boat swept away, some ready to 'let sleeping boats lie'

Organizers are still working to raise money to move the Folly Boat, an abandoned vessel that became a message board on Folly Road, but some say it's time to let it go.

A huge U.S. Coast Guard navigation buoy washed up Saturday at New Smyrna Beach, Fla., nearly 200 miles away from its mooring at the entrance to Port Royal Sound just north of Hilton Head Island. Until then nobody had reported it missing.