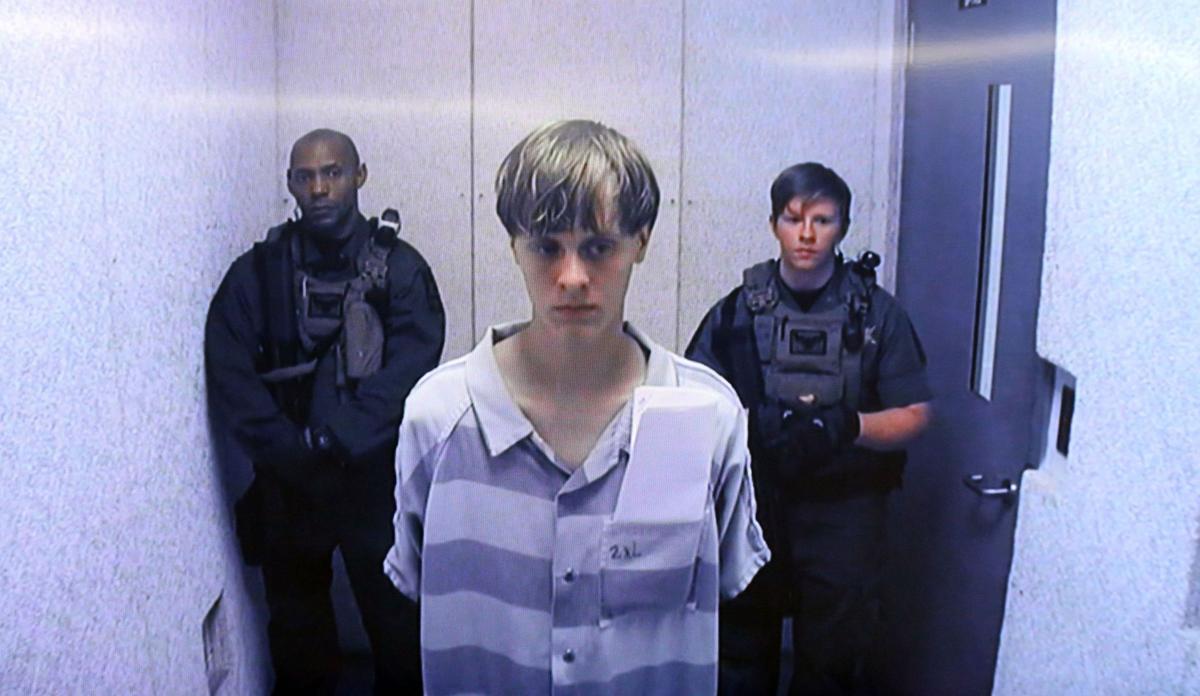 Dylann Roof, seen during his first Charleston court appearance, bought a gun despite a drug arrest. He later used it in the 2015 mass shooting at Emanuel AME Church. File/Grace Beahm Alford/Staff 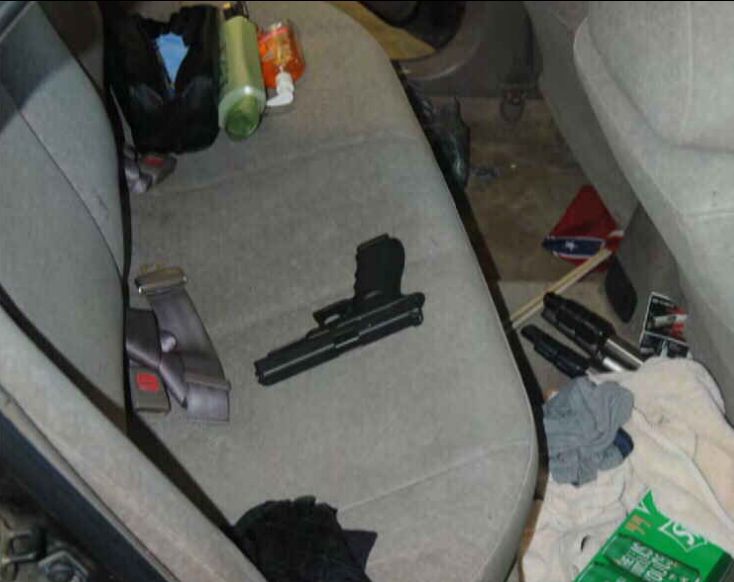 Dylann Roof's pistol sits on the backseat of his car after his arrest for the Emanuel AME Church shooting in June 2015. Provided 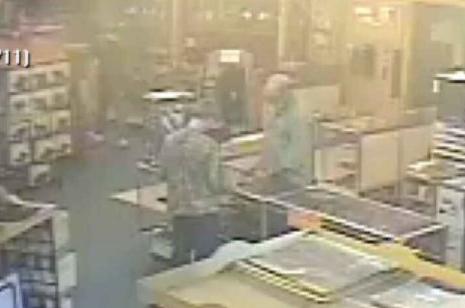 This surveillance video screenshot shows Dylann Roof looking at Glock pistols in April 2015 at Shooter's Choice in West Columbia. He filled out an application to buy a handgun and picked one up days later. Provided

After Dylann Roof's purchase exposed cracks in the gun background check system and prompted a hail of lawsuits, the FBI plans to make a change in the process, hoping to keep more weapons out of the wrong hands.

Roof would have been prohibited from buying a gun if his background check had found an arrest report indicating his drug use.

But the FBI wouldn't allow its background examiners to access a database that contained the document, instead giving them the often time-consuming task of seeking the report by faxing requests to South Carolina agencies.

With his background check unfinished after a three-day waiting period, Roof picked up a .45-caliber Glock — a wrinkle in the law that became known as the "Charleston loophole." He used the pistol two months later to kill nine people in the 2015 hate-motivated mass shooting at Emanuel AME Church in Charleston.

After the victims blamed the FBI for the failed check, a federal judge recently dismissed their 16 lawsuits but lambasted the government's "nonsense" reasons for not making an adjustment that could save lives.

For the past two years, the government has been quietly experimenting with using the National Data Exchange, or N-DEx, to search the cache of nearly 400 million records. A pilot program revealed that the database "was valuable in providing information" before the waiting period ran out.

Its use is expected to be rolled out in a process that could take up to two years nationwide, according to publicly available FBI documents discovered by The Trace, a New York-based nonprofit news organization that reports on gun issues.

"Change is always good," said Steve Hurd, whose wife, librarian Cynthia Hurd, died in the attack. "But it’s a little too late. People lost their lives because of this mistake."

The FBI's Criminal Justice Information Services runs both the database and the National Instant Criminal Background Check System. Holly Morris, a spokeswoman for the West Virginia-based division, declined to comment.

When the FBI will start implementing the plan is not clear; the agency is assessing the labor, training and technology needed. But once it begins, getting all FBI examiners, including ones who do background checks for South Carolina, to use the database will take nine months, the agency records showed. That process will last from one to two years for states that do their own checks using the FBI's system.

Charleston attorney Andy Savage, who represents several victims of the attack, said it was "a modest but important step in the right direction." But it shouldn't have taken so long, he said.

The victims, he added, plan to appeal the judge's dismissal of their lawsuits against the FBI.

"There is much more to be done if the bureau is truly committed to advancing the public trust in meaningful background checks," he said. "Three years-plus to undertake an initial step to rectify their admitted mistake and nine more months to implement it sends a loud message about the government's priority in implementing public safety measures."

Roof was arrested in late February 2015 on a misdemeanor charge of possessing a drug without a prescription. A short time later, a Columbia police report about the encounter was uploaded to the N-DEx.

When Roof, 21, filled out an application to buy his gun that April, the FBI's initial background check showed the arrest, but the charge alone wasn't reason to automatically deny the purchase. The FBI had to find the report.

But clerical errors in how Roof's arrest was reported made that difficult. An examiner sent faxes to several agencies in the Palmetto State, but none of the requests for the report went to Columbia police.

Coming up empty, the examiner abandoned the search and moved on. The result was catastrophic for the Emanuel victims, and the case exposed "glaring weaknesses" of a system that the FBI has misleadingly portrayed as robust, Charleston-based U.S. District Judge Richard Gergel would later say.

An audit ordered by then-FBI Director James Comey shortly after the attack revealed that the agency's own database might have helped stop Roof.

But attorneys defending the government in the lawsuits insisted that allowing use of the database would be complicated, requiring approval from the agency's Advisory Policy Board and a change in federal regulations. But Gergel said in a ruling last month that the FBI could make the adjustment "today" without waiting on a painstaking bureaucratic process.

The FBI ultimately concluded that a new regulation wasn't needed, clearing the way for the database's use, according to minutes from the advisory group's meeting days before Gergel's comments in June.

But allowing access to the database will not be as simple as flipping a switch, said Stephen Morris, who was overseeing the background check system when Roof bought a gun. It also could add to the time it takes for the FBI to finish checks.

The lawsuits revealed that examiners are often instructed to abandon checks that would take too long to complete — particularly in busy regions like the one that includes South Carolina. Nationwide, about 25 million checks were done last year.

Morris said extending the waiting period from three to five days would help. Such proposals by South Carolina lawmakers and others in Congress have fizzled during past sessions.

"When the wrong people are getting guns," Morris said, "we shouldn't enable people to do that."

When someone tries to buy a gun under the new system, the initial background inquiry will search the same three databases used in the old procedure. That takes about two minutes, prompting the quick approval or denial of 90 percent of gun transactions.

But if an arrest deserving further inquiry is revealed, examiners will search the N-DEx for records that will help them decide whether the buyer can legally have a gun.

During the FBI advisory board's consideration of the change, some members raised concerns about the need to respect "constitutional rights of people that should be able to timely get their guns," the panel's meeting minutes showed.

But Frank Campbell, a former government attorney who helped set up the background check system in the 1990s, praised the move.

"The idea that the FBI would have info in a database that would prohibit a gun transaction — but not make it available to the background check examiners — just doesn’t make sense," he said.

More than 6,000 criminal justice agencies voluntarily send documents to the database. Local, state and federal investigators often use the records to connect dots in far-reaching probes.

Federal officials, though, have said that Roof's was the first known case in which a document from the database might have helped deny a gun purchase.

But South Carolina is one of few states where agencies in all of its counties submit records to the database, making it likely that the documents would help background examiners.

The FBI's pilot program also found that the repository "would be beneficial" to the process, the agency's records showed. Morris, the former NICS chief, said "there's a good chance" that examiners will find a report that might have never been unearthed through the old methods.

“It’s a welcome change,” added Steve Schmutz, a Charleston attorney who represents several family members. “The more thorough they can be, the better off everyone is. But why they hadn’t done it before, I don’t know.”

The FBI adds the National Data Exchange, or N-DEx, which contains nearly 400 million law enforcement records, to the tools that examiners can …