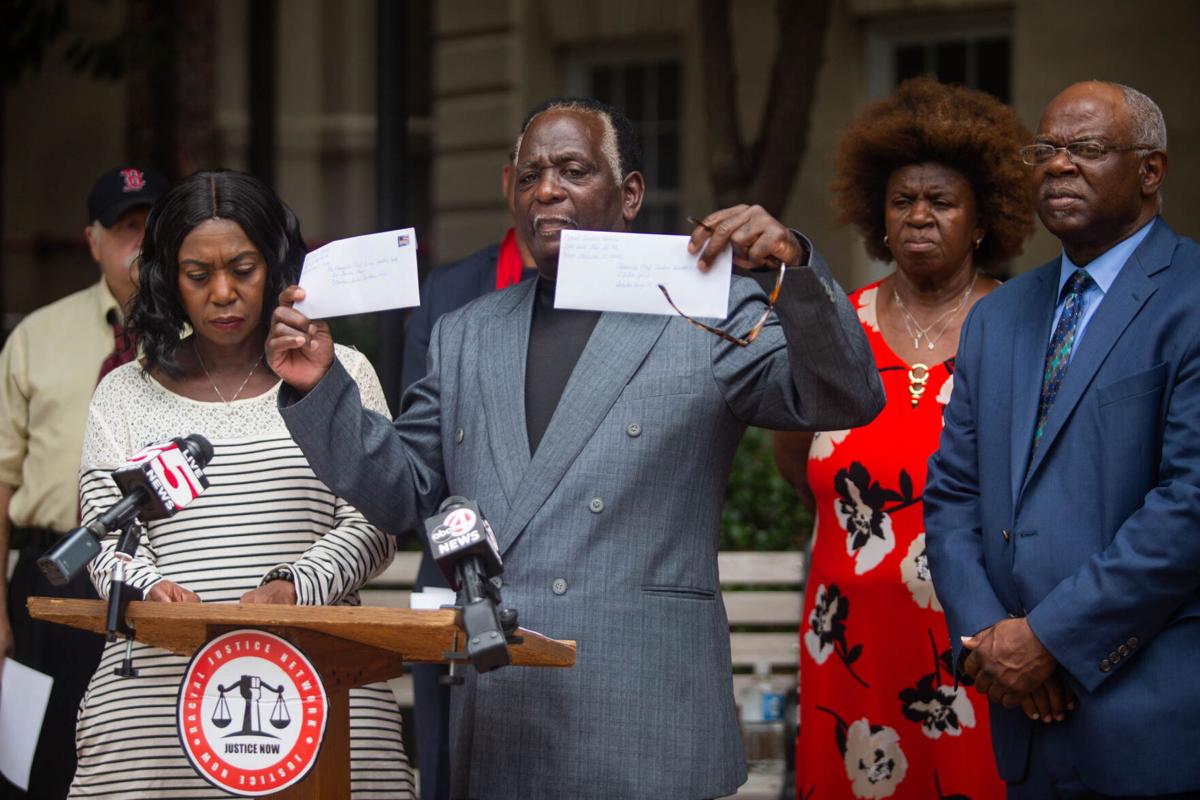 James Johnson, president of the Racial Justice Network, holds up two letters to be mailed to to South Carolina's chief justice asking for Solicitor Scarlett Wilson to be removed from the Jamal Sutherland case on Wednesday, July 14, 2021, in Charleston. Hadley Chittum/Staff 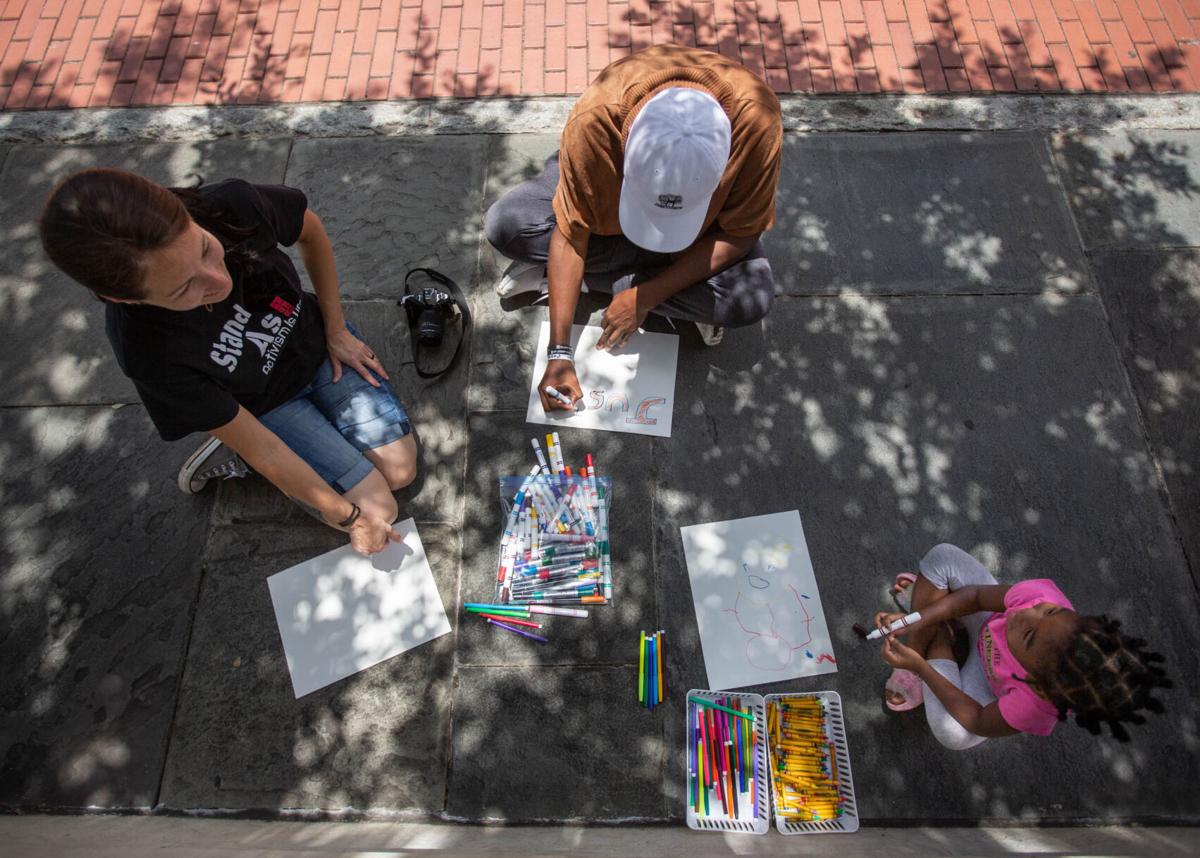 Members of the Stand As One activist group make posters and write messages for Solicitor Scarlett Wilson after the press conference calling for her removal from the Jamal Sutherland case on Wednesday, July 14, 2021, in Charleston. The group believes it's important for her to hear from the younger generation. Hadley Chittum/Staff

Leaders of a social action group have asked S.C. Chief Justice Donald W. Beatty to appoint a different solicitor to take over the criminal investigation into Jamal Sutherland’s death.

Sutherland, a 31-year-old mentally ill man, refused to leave a cell at the Charleston County jail for a bond hearing on Jan. 5. Houle and Fickett forced him from the cell using pepper spray and Tasers — actions that may have led to his death. The incident was captured on body camera video and jail video recorders.

“In support of the family, community, civic organizations and the greater Charleston area, we respectfully request that you appoint a new Solicitor to take over the Sutherland’s case,” James Johnson, president of the Racial Justice Network S.C., wrote in the letter, which also was emailed to the chief justice on July 13.

In a July 14 news conference, Johnson said Wilson had been prolonging the decision to charge the detention deputies.

“How many times does she want to call specialists in?” Johnson said. “It’s plain to see this man was tased nine times and died on the floor. What more does she want?”

It was unclear on July 14 whether the chief justice could remove a solicitor. A spokesman for S.C. Attorney General Alan Wilson's office said he has the authority to appoint a special prosecutor. That role is not defined in the South Carolina Constitution for the chief justice. But that duty is not prohibited in the constitution either.

Wilson had been expected to make a decision by the end of June on whether to criminally charge Houle and Fickett. She said on June 29 and again on July 14 her office was continuing to investigate the case.

The solicitor issued a statement on July 14 saying delays in the investigation have come from the Charleston County Sheriff's Office.

"After nearly seven months of requests from SLED, my office and later the FBI, on last Thursday afternoon, July 7, 2021, the Charleston County Sheriff’s Office provided my office with 162 gigabytes of information regarding the Special Operations Group, the Sheriff’s team of detention deputies involved in the death of Jamal Sutherland," Wilson said in the statement. "Already within this recently provided information, we have discovered evidence relevant to our investigation."

Later on July 14, Sheriff Kristin Graziano said the delay was prompted by discovery of a training video used by the Special Operations Group. She said in an emailed statement she notified Wilson "immediately."

"As a result of this discovery, I deemed it prudent to do an additional expansive search for anything that may be considered relevant to this matter that had not already been submitted to the solicitor," Graziano said.

"The information that Solicitor Wilson referred to in her statement today was uncovered by a third party that our office deemed could be relevant to this investigation," the sheriff wrote. "As a result of the prior administration’s lack of training records as it pertains to the SOG unit, it has been difficult to obtain all information as quickly as we would like."

Wilson said she met with Sutherland's family and their attorneys "to inform them" of the sheriff's delays.

"They share in my disappointment and concern over delays by the Sheriff’s Office," she wrote. "Both the community and the Sutherland family deserve a thorough investigation and I will continue to push for that."

Sutherland's mother said on July 14 she was perplexed by the delays.

"I am having a hard time waiting as these criminals get to walk free from a murder they committed on my son," Amy Sutherland told The Post and Courier. "They should be in jail. If my son had murdered a White person he would have been jailed on day one. What does that say about the criminal system in Charleston, S.C.? It's like we are still living in the '60s in this state. If life doesn't change in our state we are in for a horrible riot. Please just pray for my family."

The Sutherland family resolved litigation in May with the city of North Charleston and the Charleston County Sheriff's Office in one of the largest legal settlements of its type in South Carolina, $10 million. 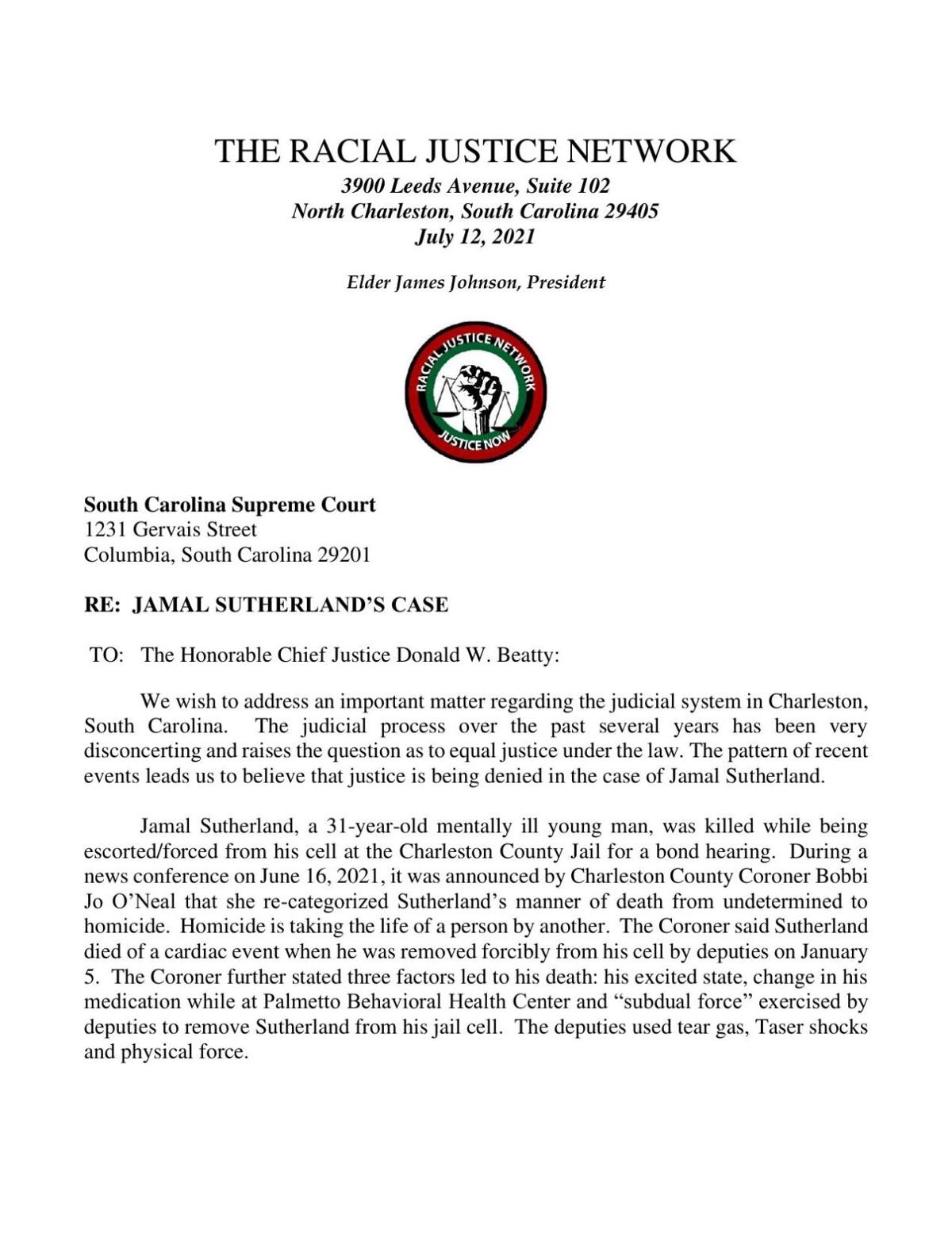 At the July 14 news conference, activists and Charleston-area officials stood by Johnson in the sweltering afternoon heat as he explained why he wrote the letter to Beatty. They gathered in a courtyard next to the Solicitor’s Office on Meeting Street.

“I don’t want to hear her excuses no more,” Johnson said. “We want her off this case and we don’t want her to handle any other high-profile cases.”

Thomas Dixon, a community activist, said Wilson’s handling of Sutherland’s case parallels her investigation into the killing of Walter Scott in North Charleston six years ago. Michael Slager, a former North Charleston police officer, fatally shot Scott following an April 4, 2015, traffic stop, a foot chase and a struggle involving a Taser. The shooting made international news after cellphone video recorded by a bystander surfaced in the days following the shooting.

"We stood here in the aftermath of the death of Walter Scott, asking that Solicitor Scarlett Wilson recuse herself from that case," Dixon said.

After the news conference, Stand as One, a local activist group, met to create posters asking Wilson to press charges against the the detention deputies.

The event was designed to give those under 18 a chance to write letters and draw pictures for Wilson about the Sutherland case. Members of the group planned to present the posters and letters to the solicitor’s office.

Olivia Diaz covers breaking news and public safety in the Charleston area. She spent the past four years in Richmond, Virginia, studying journalism and global affairs at the University of Richmond.