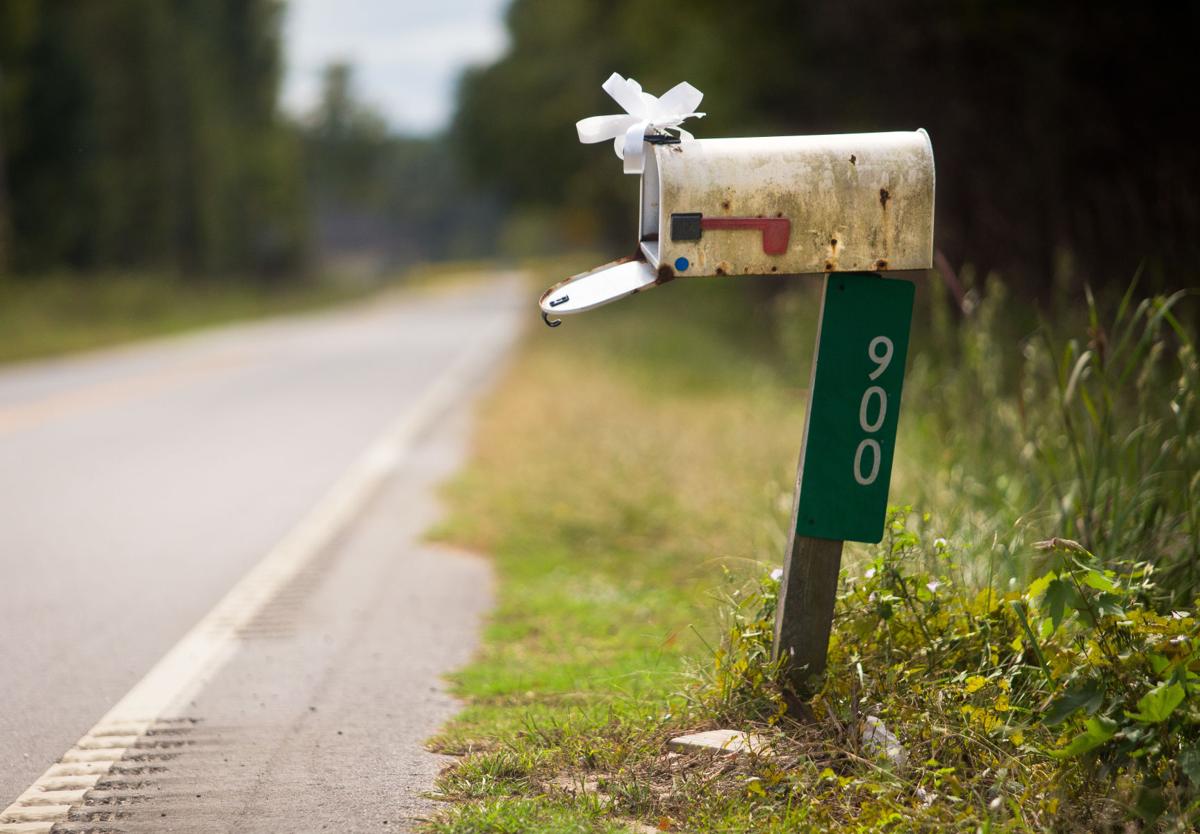 A white bow is seen on top of a mailbox along the route of former mail carrier Irene Pressley, who was killed on Sept. 23, 2019, while working. Residents along her route placed white bows and flowers on dozens of mailboxes in her memory. Andrew Whitaker/Staff 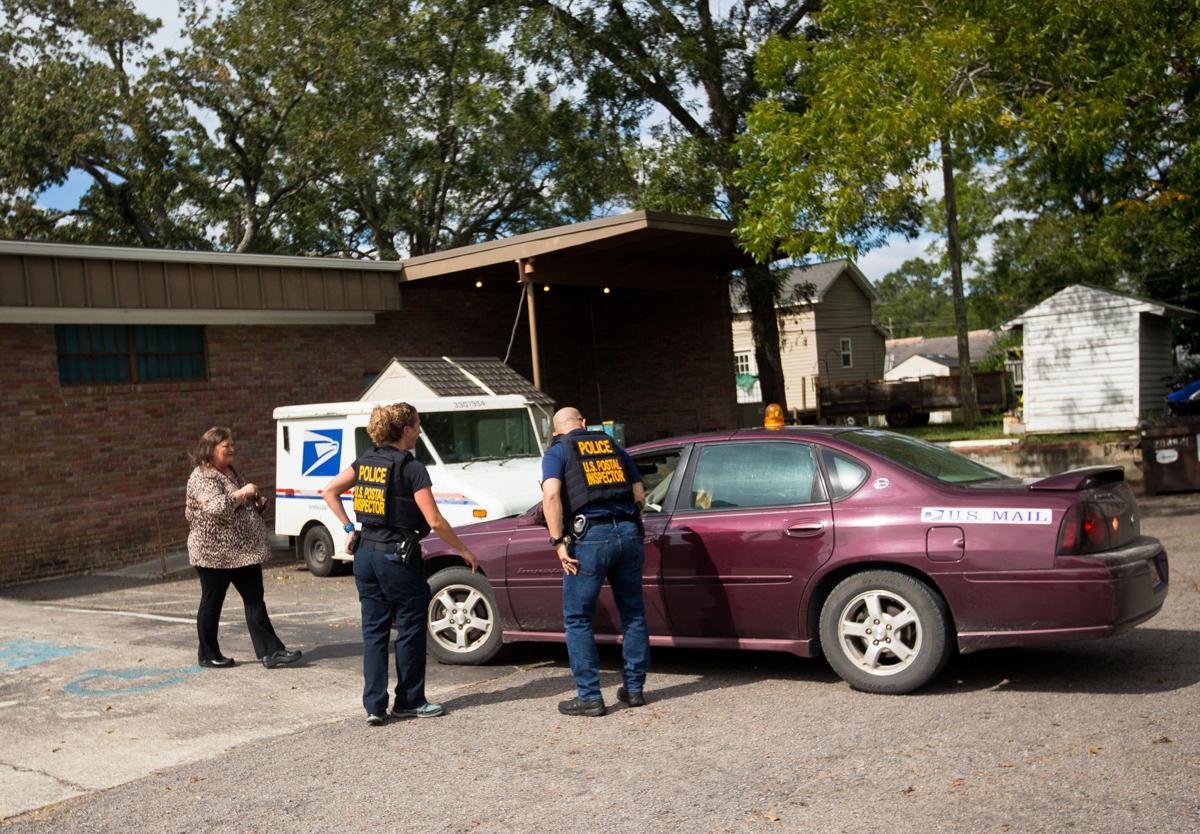 Agents from the U.S. Postal Inspection Service check in with the mail carrier filling in for Irene Pressley, who was killed while working on Sept. 23, 2019. Andrew Whitaker/Staff 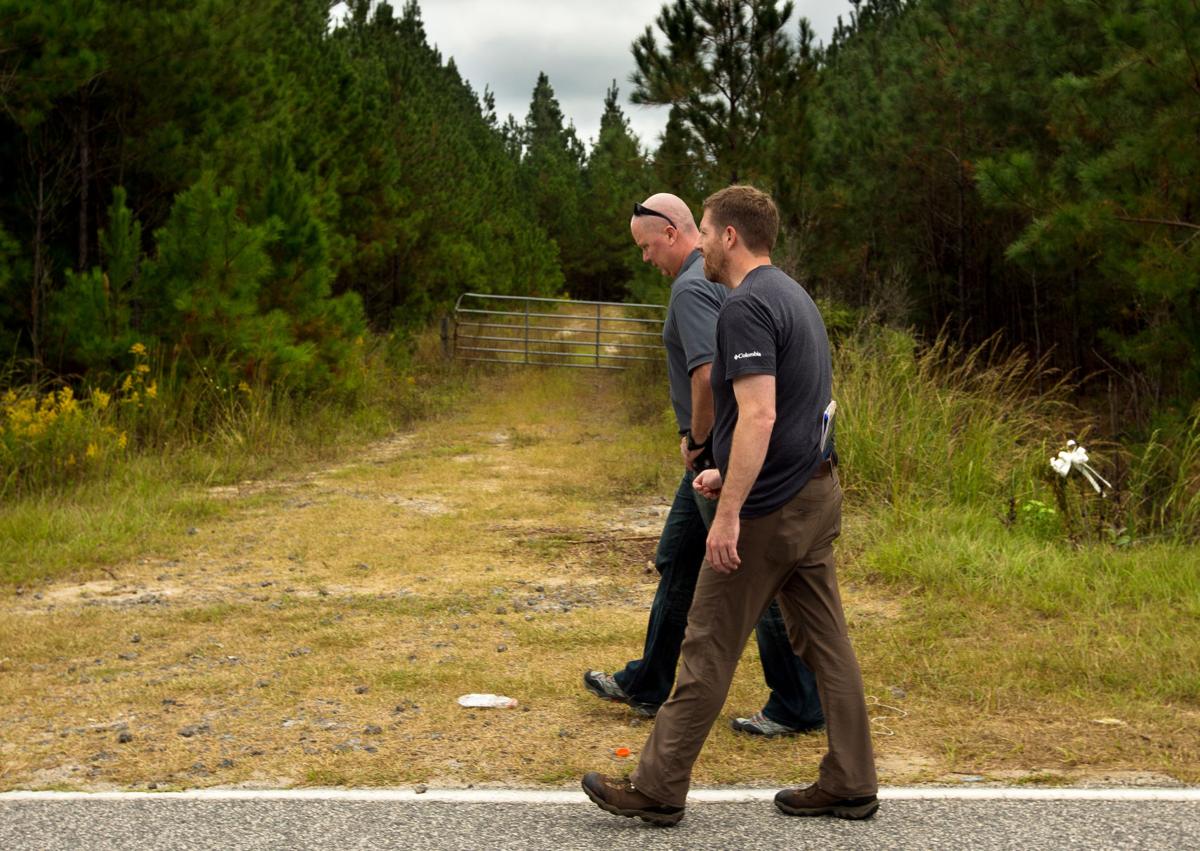 U.S. Postal Inspectors walk along Morrisville Road on Wednesday, Oct. 9, 2019, outside of Andrews. Irene Pressley, a longtime mail carrier, was shot and killed on her route on Monday, Sept. 23. Andrew Whitaker/Staff 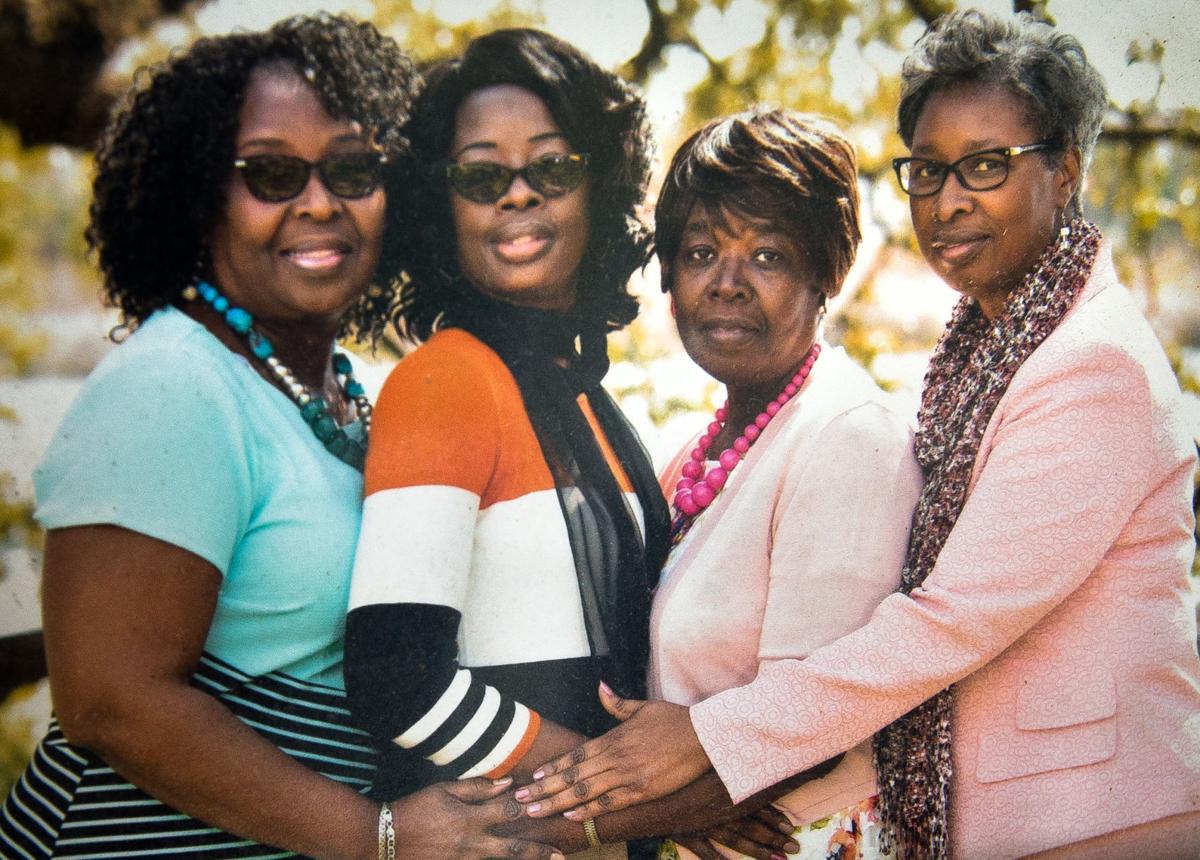 Irene Pressley (third from left) with three of her sisters, Cassandra Coleman, Lorine Gibson and Gloria Bateman in a family photograph. Oldest sister Elisha Hubbard is not pictured. Pressley was killed while working her mail route on the afternoon of Monday, Sept. 23, 2019. Andrew Whitaker/Staff 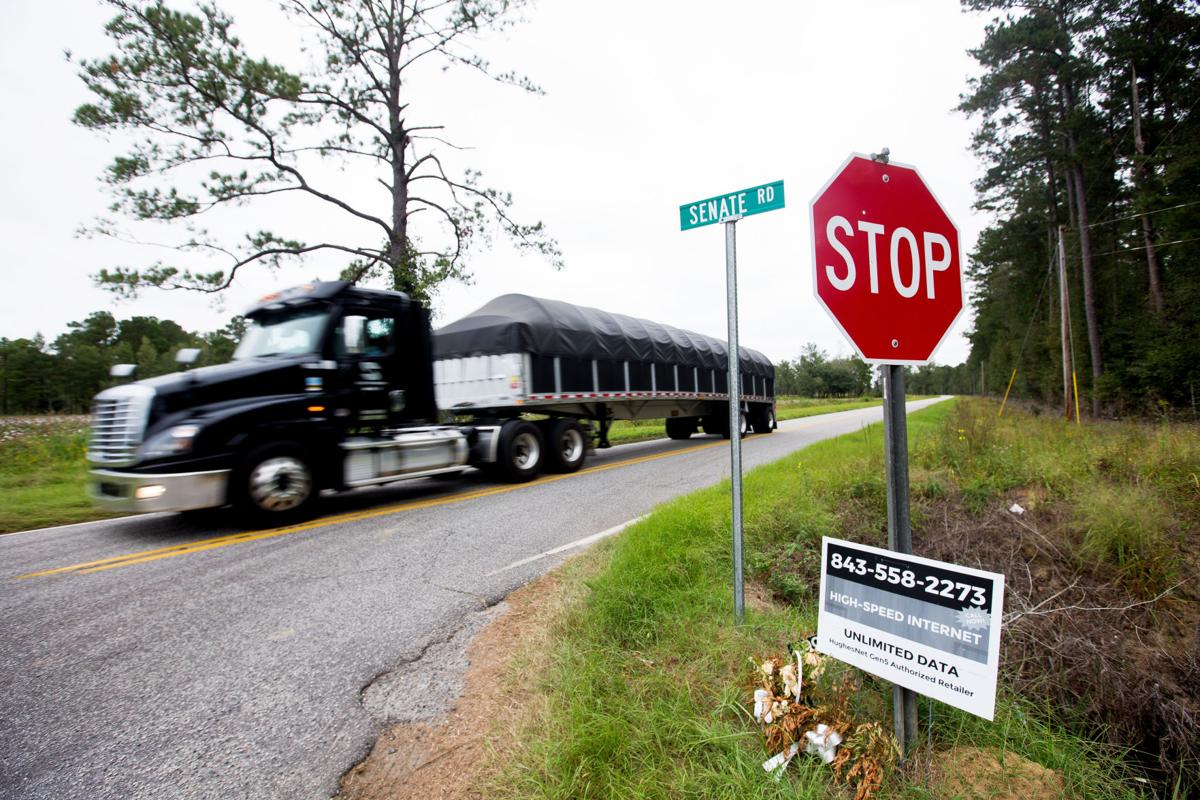 The intersection of Senate and Morrisville roads, where police say former mail carrier Irene Pressley was killed on Sept. 23, 2019, outside of Andrews. Pressley, a rural mail carrier, would travel in her Jeep delivering mail for roughly 70 miles each day. Andrew Whitaker/Staff 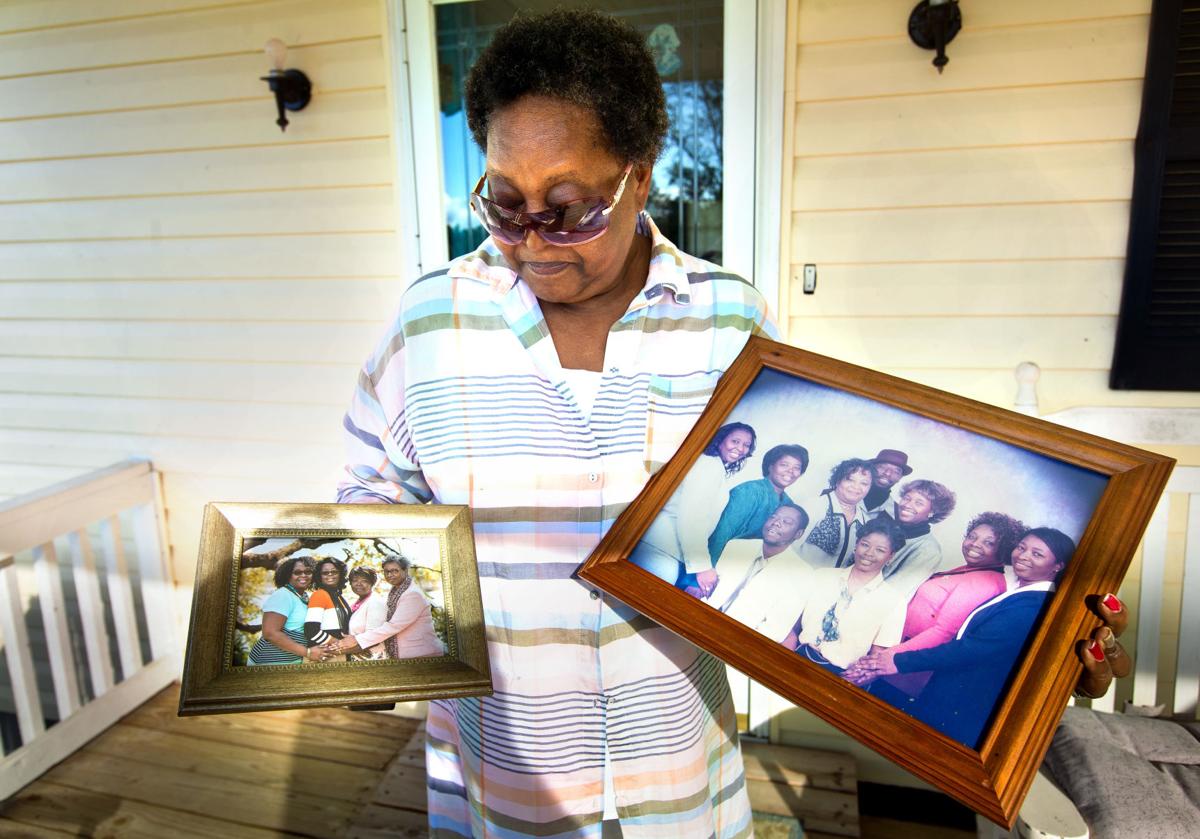 Elisha Hubbard holds family photos outside of her father's home on Wednesday, Oct. 9, 2019, near Andrews. Hubbard was one of the last people to see her sister Irene Pressley  alive before she was killed on the afternoon of Sept. 23, 2019, while working her postal route. Andrew Whitaker/Staff 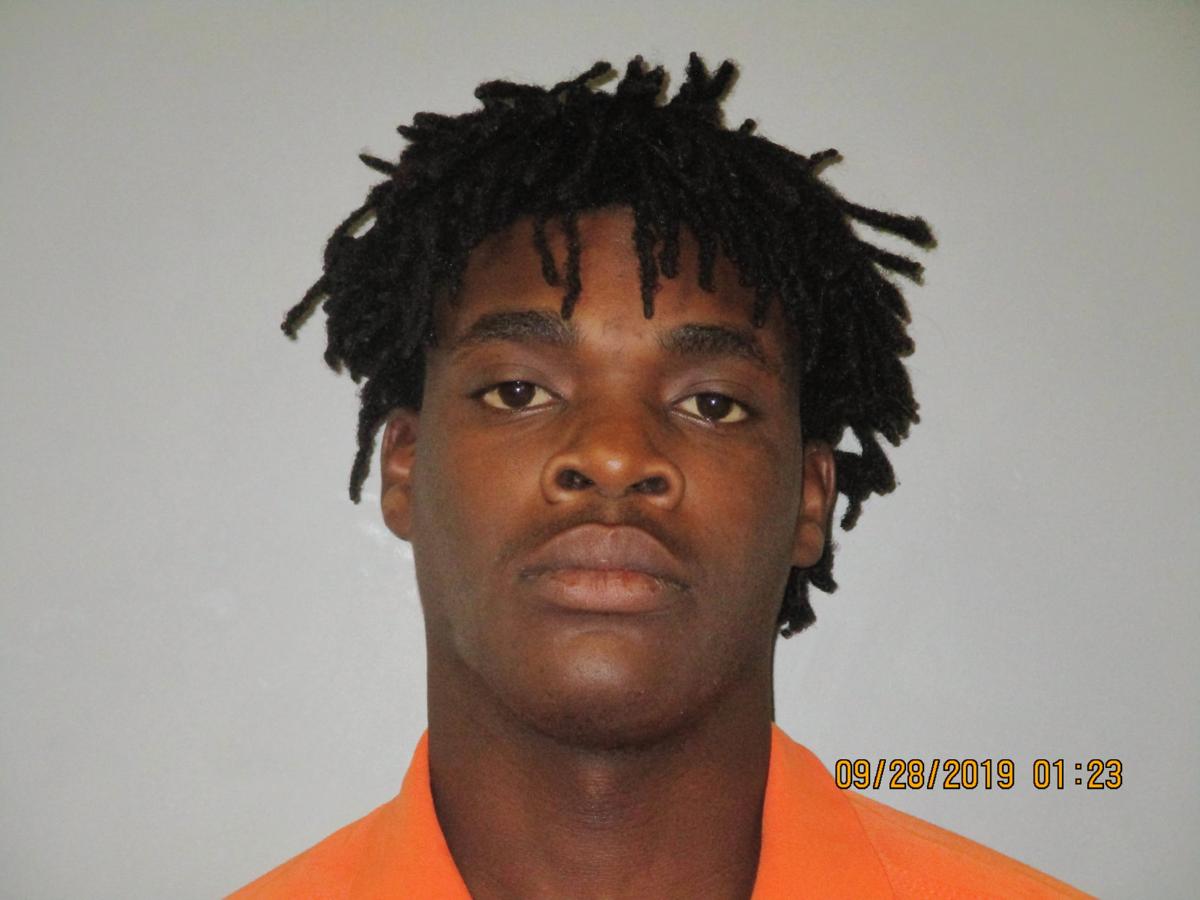 ANDREWS — She was 64, with short hair and a warm smile. Her daily visits were reliable, often to the minute. Letters and packages for longtime neighbors. Fruit and cookies for dad. Her Jeep Liberty rumbling on the rough road she knew so well. The same road where she was killed.

Irene Pressley's mail route in this rural town took her through neighborhoods where generations of the same family live close by. It's the area where she grew up; where she worshipped and raised a family. It's a place where people sit in front of their homes, waving at cars that pass by.

Last month, authorities say, Pressley was shot multiple times, at an intersection of two roads she drove every workday. It happened in the middle of the afternoon, five hours into her roughly 70-mile daily ride.

Days into a manhunt that attracted federal officials from across the country, investigators arrested a young man who lived in the area. They gave no motive for his crime. Weeks later, the investigation hasn't stopped and questions linger.

In the absence of details, rumors have spread among the longtime residents, including one suggesting that a dispute over a piece of mail led Pressley to be targeted. It's all speculation at this point.

SC Ford dealer says giving away rifle, Bible, flag to buyers 'not political in any way'

Neighbors along her postal route worry that more people could have been involved and are still on the loose. Authorities have remained tight-lipped, as investigators continue to trudge along a nearby railroad track and through trees by the road where Pressley died, searching for more evidence.

Meanwhile, her family members struggle to understand why a young man would kill such a beloved woman.

White bows track Pressley's mail route. They start inside the only post office in Andrews, where one now covers part of a glass door. They get more frequent as you head north.

They're attached to street signs, churches, and mailbox after mailbox. Dozens of them in all. Affixed by her former customers around this agrarian town, about 60 miles northeast of Charleston.

Its population is just under 2,900. Welcome signs to the town tout it as the home of Chubby Checker, the rock 'n' roll musician who gave us "The Twist."

On a recent day, outside Andrews' limits, two bows stood out amid a basket of dead flowers at the base of a green sign for Senate Road.

It was at that intersection, with Morrisville Road, where authorities say Pressley was shot on Sept. 23. She had worked as a mail carrier for the Andrews post office for more than 20 years. Her co-workers called her "The Mother," according to her obituary.

A few miles south lives Laurie Morris, where he has been for more than 50 years.

Pressley was nice, he remembered, and helpful. He'd leave money in his mailbox and she would turn it into stamps for his mail. So-called rural letter carriers, like Pressley, are a critical connector for people outside of larger cities. They handle some people's most intimate communications and may be the only person a resident talks to in a day.

“When you’re retired, you look for things like that," Morris said, a white bow attached to the pole holding up his mailbox. “It’s kind of exciting when the mail arrives."

In some areas along the route, homes and mailboxes are bunched together. In others, the mailboxes are on the road, but their owners are at the end of driveways that connect to open land.

Morris was baffled by Pressley's killing. "What package could mean her life?”

Authorities continued to investigate that question and provide protection to employees in case of another attack.

Two U.S. Postal Inspection Service agents in bullet-proof vests followed closely behind Pressley's replacement on a recent afternoon as she navigated her former mail route. One of the roads was gravel and barely wide enough for a single vehicle. Her car, and those of her followers, kicked up a cloud of dust.

The woman had served as a temporary fill-in when Pressley was off work. Now, she was taking over until the job was filled permanently.

Over roads and driveways, she deposited letters under their watchful eyes. A blinking light was attached to the car's roof, with a "U.S. Mail," sticker on the vehicle's side.

Her shirt read: "Tough enough to be a postal worker. Crazy enough to love it."

More than 70 people, including federal postal inspectors, postal police and other officials flocked to the area to help after the killing. Sheriff's deputies were on 24-hour patrol as authorities issued a public appeal for tips.

Then federal, state and local officers made an arrest: Trevor Raekwon Seward, 22.

Skinny and a little over 6 feet tall, Seward was carrying nearly $300 in cash when he was taken to the Williamsburg County jail on Sept. 28, according to his booking record.

Authorities said Seward was seen a short time before the shooting holding what looked like an AR-15 military-style rifle.

Seward's fingerprint was found on a piece of mail that was recovered from the scene of the killing and analyzed by the post office's forensic laboratory in Virginia, according to an arrest affidavit.

Beyond that, authorities have released little else.

Jessica Adams, a postal inspector and agency spokeswoman, declined to answer additional questions about the investigation, including whether agents were looking for additional suspects. "It is a very strong ongoing investigation," she said.

Along Morrisville Road, federal postal officials on Wednesday continued to comb for clues among blades of overgrown grass and dirty Styrofoam cups a couple of miles south of where police say Pressley was shot. A white bow was tied to a small tree near a dirt road that led to a gate.

Police did not say how many shell casings were found at the scene of the shooting. But one neighbor, who asked not to be identified for his safety, said he saw Pressley's Jeep when it was towed out from the scene.

It was mangled by scores of bullets in the vehicles' body, he said. Its front windshield was cracked with bullet holes and the back windshield was gone.

Williamsburg County Coroner Harrison McKnight declined to answer questions about how many times Pressley was shot, saying her death was still under investigation.

Seward had past run-ins with police, but the accusations against him weren’t of the same violent nature he now stands accused of.

In 2017, he pleaded guilty to third-degree burglary in Williamsburg County. He received probation.

Last month, he was ticketed for driving over the speed limit, by 10 mph or less, in Georgetown County.

No federal charges had been filed against Seward in connection with Pressley's death, as of Friday.

But Lance Crick, a federal prosecutor and spokesman for the South Carolina U.S. Attorney's Office, said last week that the investigation was not complete.

“It’s very much collaborative and ongoing,” he said.

No one answered the door at an address listed on Seward's booking report when a reporter visited recently. A white bow was on the mailbox out front.

Bows also lined the road leading toward the Pressley home where "Sonny," her husband of 36 years, leaned against the porch railing.

Rodney Gibson, one of her sons, stood in the front yard, struggling to find words.

He wanted justice for such a heinous crime, he said. The family was just taking it day by day.

Pressley's sister, Elisha Hubbard, had watched out for her as the oldest of 11 children will do. Irene was eight years younger.

She was thoughtful: the kind of sister who would send you poems just to share how she felt about you; the family member who would get the grits or tomatoes cooking for a fish fry, if no one else was getting to work.

A few years ago, Hubbard returned home to take care of their parents on a plot of land where they grew up, outside of Andrews' town limits. She watched every day as Irene would stop at the home, during her route, with letters and a gift for their father and mother. Pressley would always place the gift in their hands before heading back to work.

Hubbard watched over Irene when she fished. Boy, did she love to fish. Often after work, and before she went home for the evening, Irene would stop off at a waterway. One regular spot was along the road heading toward Georgetown.

It was there that Hubbard would see her Jeep and stop. Sometimes, Irene would be alone and Hubbard would stay with her to keep her company. She worried about Irene when she was fishing. But never on her job.

Pressley had talked about retiring next March or April.

On her last day of her route, a little before 3 p.m., Irene stopped in to say hello. She was running late and sounded flustered during a phone call. She told Hubbard she was struggling to get through her day.

Their conversation was hurried as Irene handed over envelopes, before getting back into her Jeep to finish her route.

Hubbard went to say something, but didn't get the words out as Irene waved goodbye. "We'll talk later," Irene said, as she headed on the gravel driveway.

The older sister watched as Irene drove away — toward the intersection, where minutes later she was shot.