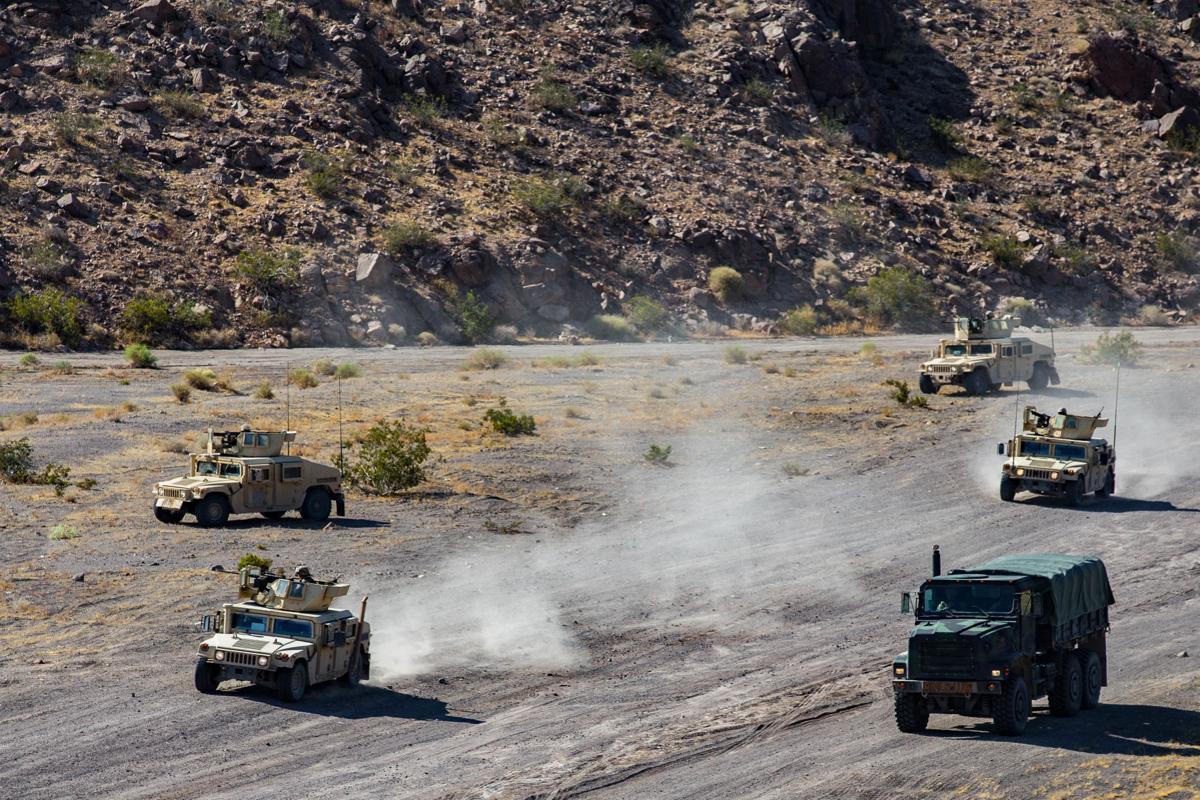 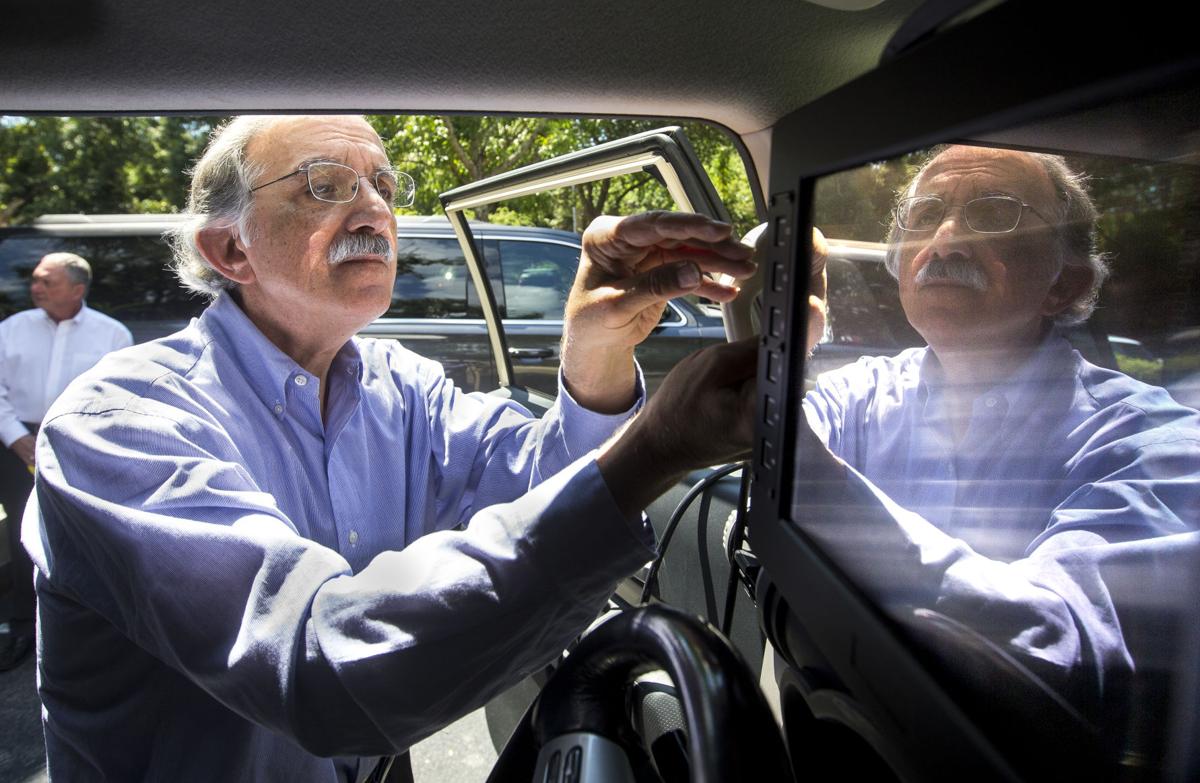 Phil Williams with Convergent 3D in Mount Pleasant hooks up the display camera which is converted from 2D to 3D, providing the viewer with depth in real time, on the driver side of a Toyota FJ Cruiser on Tuesday, Aug. 6, 2019. The technology would help prevent rollover training deaths in the military. Andrew J. Whitaker/Staff 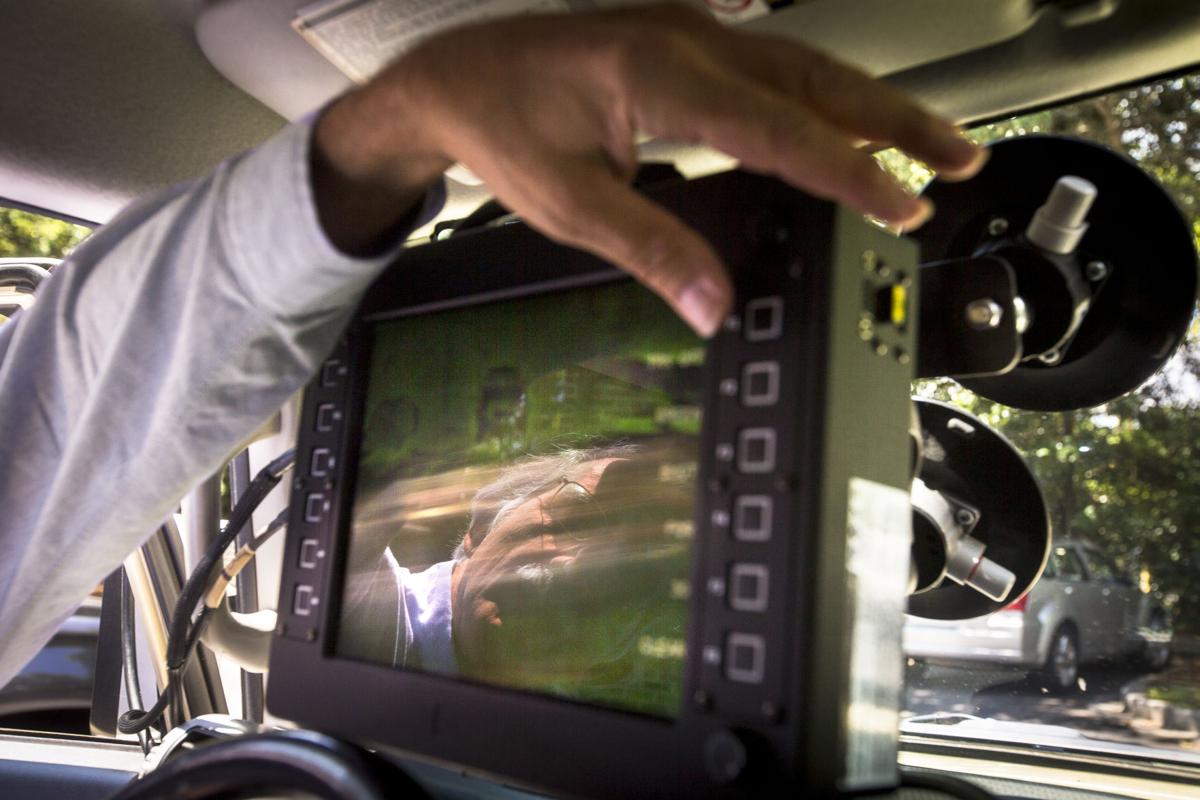 Phil Williams with Convergent 3D in Mount Pleasant changes modes on the display monitor which is converted from 2D to 3D, providing the viewer with depth in real time, on the driver side of a Toyota FJ Cruiser on Tuesday, Aug. 6, 2019. The technology would help prevent rollover training deaths in the military. Andrew J. Whitaker/Staff 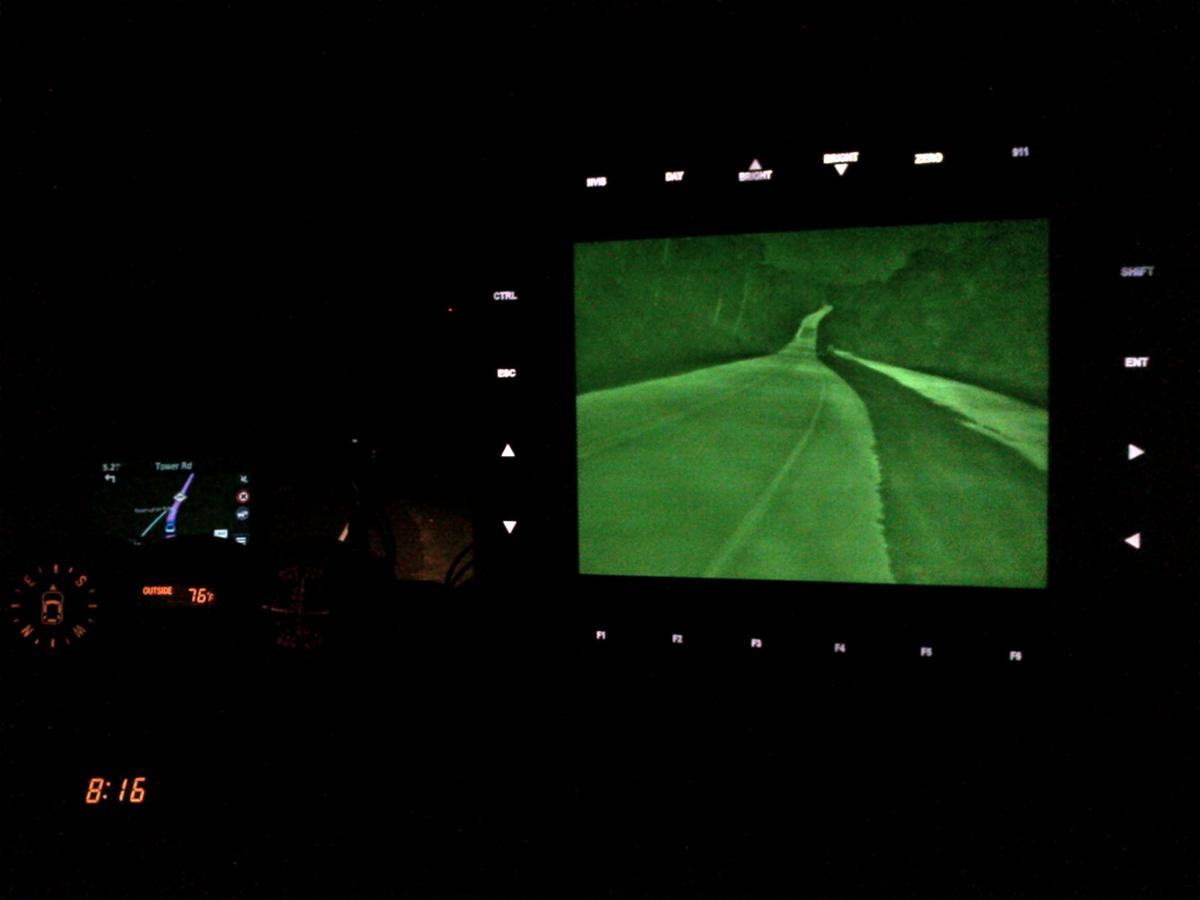 Convergent 3D's technology allows soldiers to see further down the road in strenuous conditions, which could prevent rollover accidents in the field and while training. Convergent 3D/Provided 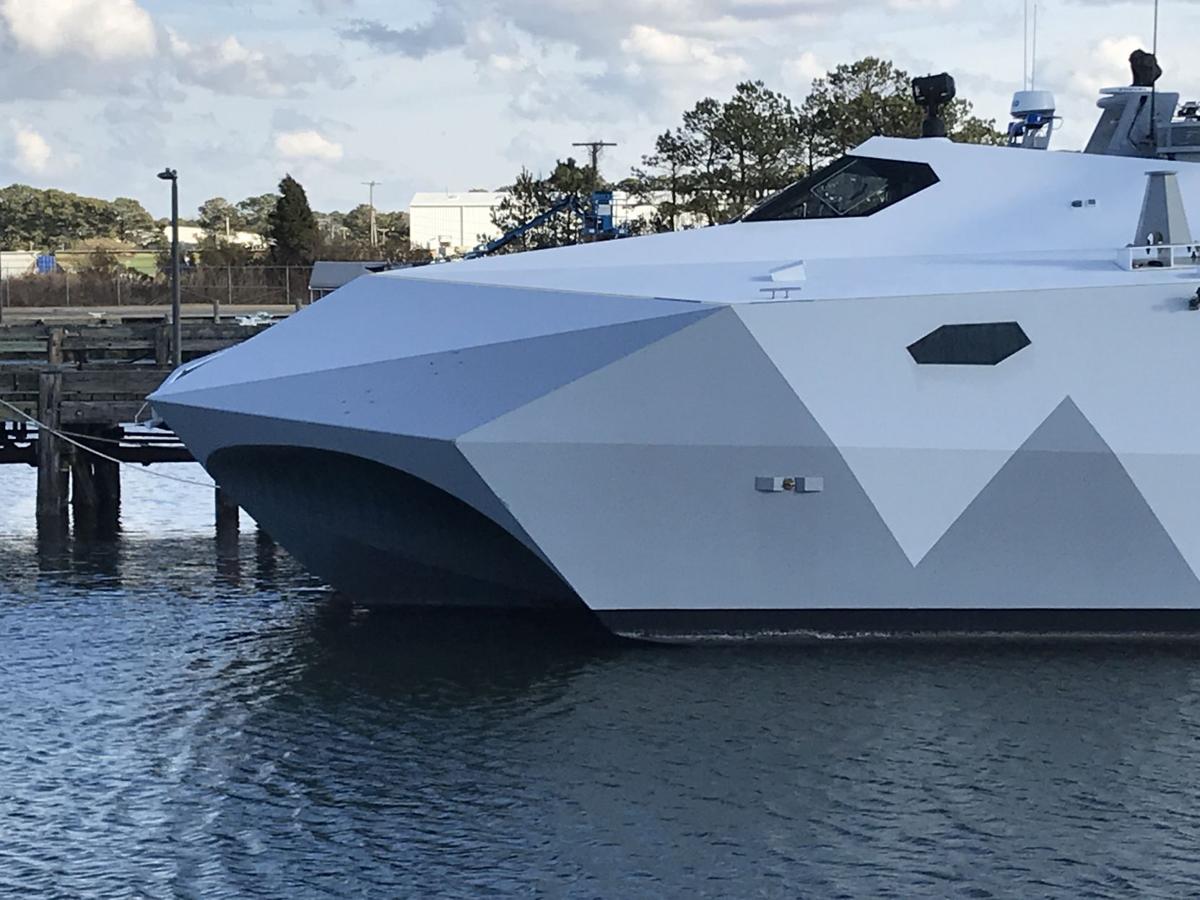 The M80 Stiletto is a prototype navy ship used for stealth missions. Convergent 3D got the chance to try their equipment out on a model in Virginia. Convergent 3D/Provided

Dennis Drew is tired of seeing the headlines.

The retired Vietnam-era Marine colonel reached his breaking point when he saw the news that Conor McDowell, a 24-year-old Citadel graduate and Marine lieutenant, died in a rollover training accident. He was leading a light-armored vehicle exercise at Camp Pendleton when the transport tipped into a massive hole covered by tall grass.

The news was jarring to Drew. The tragedy was one of the six training deaths related to vehicle flips this summer and it hit close to home.

Between 2006 and 2018, more than 5,000 troops were killed in accidents, according to a report by the Congressional Research Service. In the past year alone, more than four times the number of troops have been killed while preparing for war than in combat.

But, in a small office building in Mount Pleasant, the Vietnam veteran-turned-CEO and team member Phil Williams believe they may have a partial solution to the military's epidemic of vehicle deaths. In the conference room of their company Convergent 3D is a series of monitors, cameras and sensors, all technology the duo believes can help alleviate senseless deaths and pave a new way for soldiers to train and go into combat without fear of environmental obstacles cutting their service short.

Founded in 2013, Convergent 3D's technology started as a patent that had lapsed from one of Drew's former business partners. The idea was simple but the technology was complex. A camera on the front of a Humvee had only been able to record two-dimensional footage and stream it back to a two-dimensional display. But their technology would convert the footage to a three-dimensional display, which gives service members the ability to perceive depth, such as pitfalls on a road or a sudden dip in a highway, before it's too late.

It's one of the only companies that offers that type of visual feedback.

"I think this technology could address this issue," Drew said. "You would be able to perceive depth before you get there. You'd be able to see where the ground tilts, where the holes may be, and you'd be able to react a lot faster."

In South Carolina, a state swimming with military contractors and Department of Defense dollars, Convergent 3D is a small fish. The Pentagon netted $2.5 billion on contracts in the Palmetto State in 2017, the latest numbers available. At least $1.1 billion of that was spent in Charleston County. But the Mount Pleasant-based technology company has yet to see a dime of government money.

They believe their technology can reduce the risk of vehicle mishaps, can allow drivers to have greater tactical agility and operating speed, can give soldiers more situational awareness and physiologic burden on vehicle operators. By using night vision, motion cameras, infrared scanners, heat-sensors and other tactical equipment, they can provide a wide-ranging view of a path and relay the danger back to the driver in real time.

Convergent 3D owns a Toyota FJ Cruiser with 160,000 miles on it. They keep it in the parking lot and mount the monitors inside to demo the technology whenever the company can.

Williams provided an example: He showed a picture of a vehicle driving in the dead of night, headlights illuminating the path just a few yards in front of the bumper. But the monitor on the inside showed footage of the path more than a mile down the road, showing every curve and dip along the way.

"The military has deployed vehicles with one camera," Williams said. "This is what they could do with multiple cameras."

Convergent 3D has reached several cooperative research and development agreements with military branches. Unlike a Pentagon contract, there's no payment from the U.S. government involved, but it's often seen as a foot in the door to landing one. The group's latest partnership is with the U.S. Army's Night Vision Laboratory at Fort Belvoir in Virginia.

"We have worked alongside the Army and Navy to implement this tech," Fulmer said. "But it has shown to be a very slow process."

These trials are all successes for Convergent 3D, but it's still unclear when the company's equipment could be installed inside military vehicles. Thomas Spoehr, a retired Army lieutenant general with almost 40 years of military experience who works with the Washington, D.C.-based think tank the Heritage Foundation, said the military's always searching for solutions, but they aren't always ready to buy.

"The military's always on the lookout to reduce accidents," Spoehr said. "It's kind of like throwing out bait to see if the sharks will come. It's hard to break into the Pentagon acquisition system."

In the wake of McDowell's death, his family has lobbied congressional leaders and senators for change. It has been a little more than three months and his father, Michael McDowell, is still pleading for solutions.

"We have joined together with the other five families who, over two months, lost husbands, sons, fathers of babies and children, to seek urgent action on range safety, risk assessment, vehicle reliability, training for operators, and more," McDowell wrote on Facebook. "We cannot, sadly, bring our beloved sons back, but we can work like hell to save others."