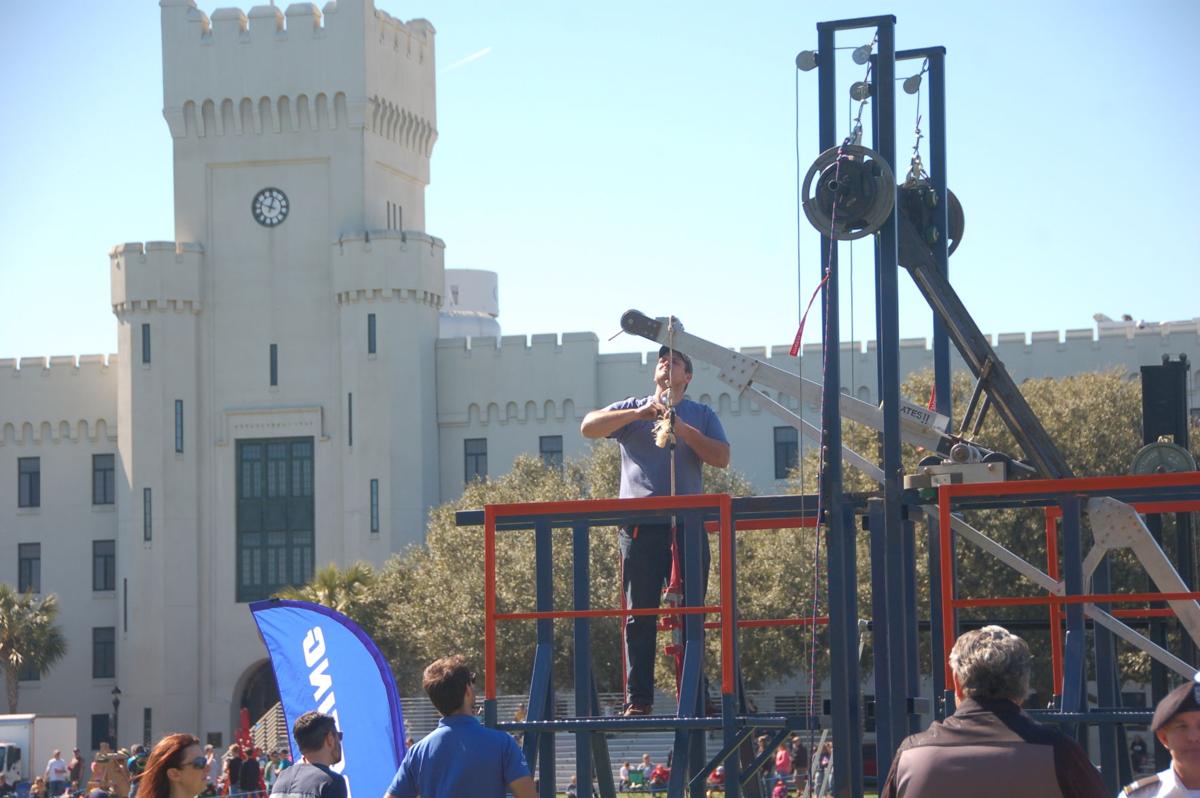 A member of Boeing's team makes an adjustment to a trebuchet at the Storm The Citadel competition on Saturday at Summerall Field. Gregory Yee/Staff 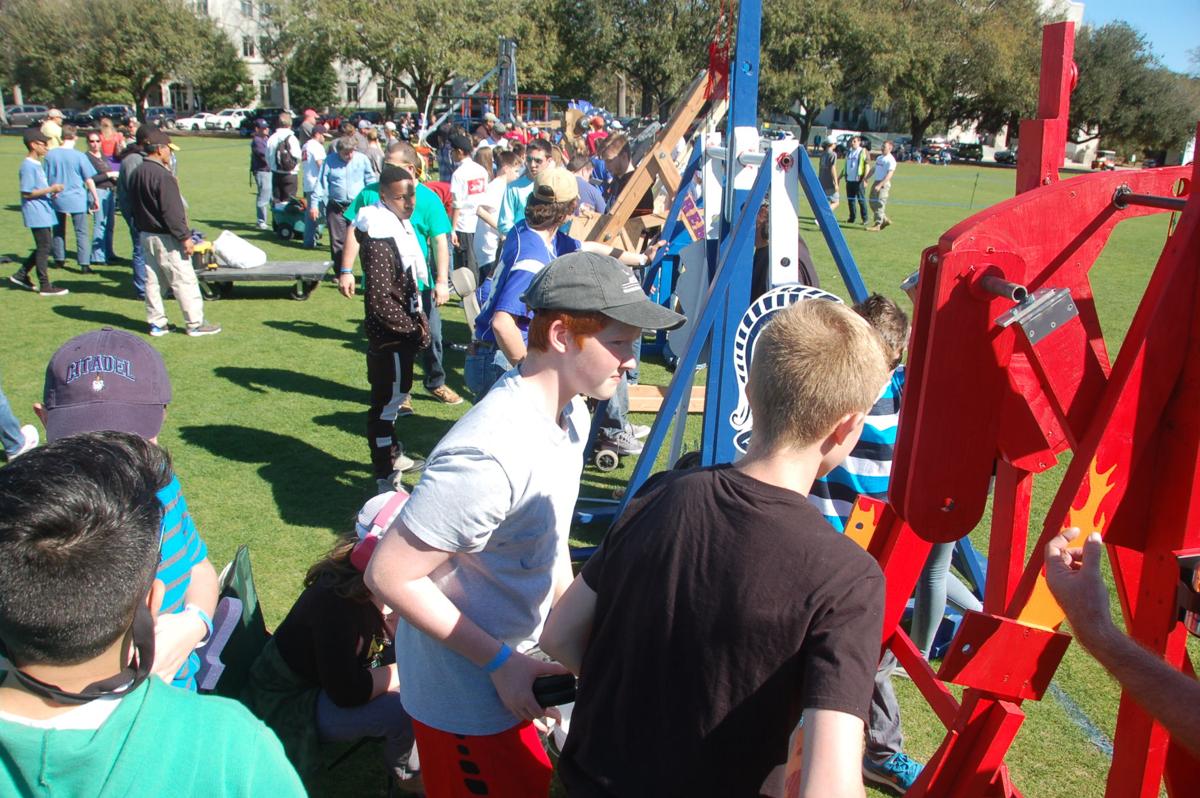 Students line up for the distance portion of the Storm The Citadel trebuchet competition at Summerall Field on Saturday. Gregory Yee/Staff 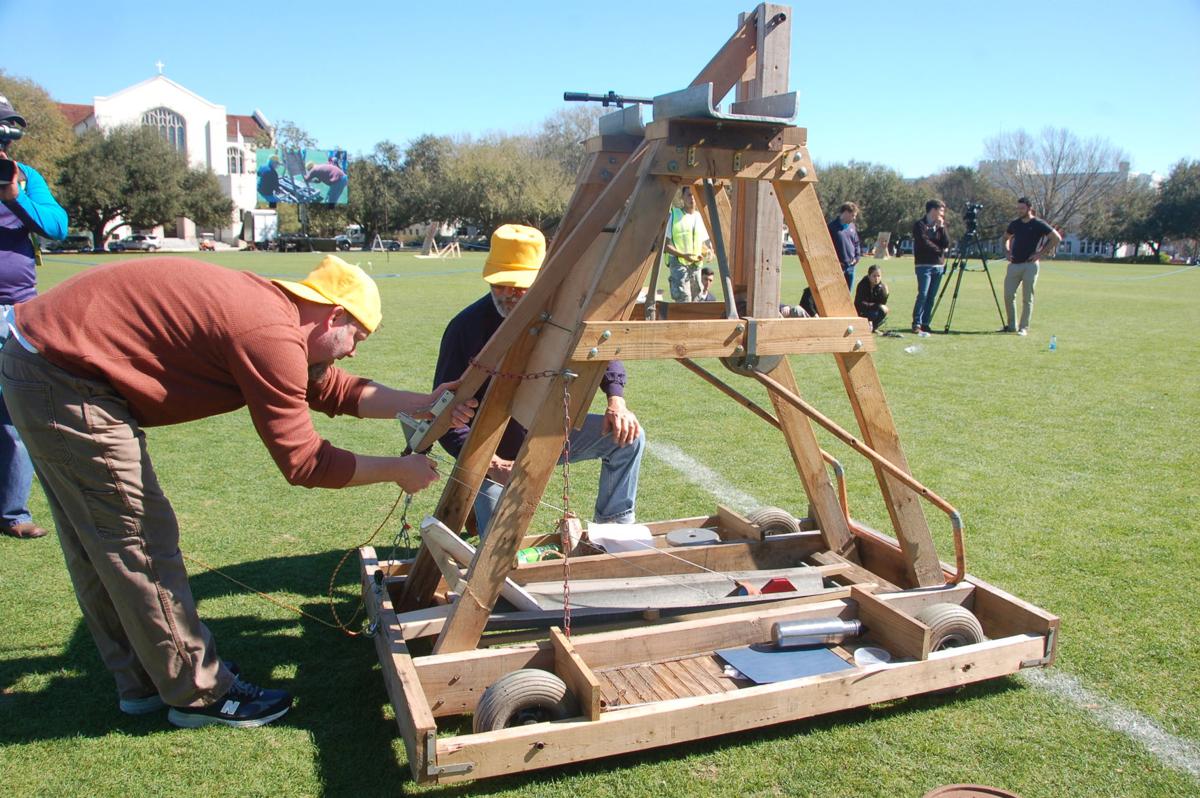 Competitors make adjustments to a trebuchet at the Storm The Citadel event at Summerall Field on Saturday. Gregory Yee/Staff

A member of Boeing's team makes an adjustment to a trebuchet at the Storm The Citadel competition on Saturday at Summerall Field. Gregory Yee/Staff

Students line up for the distance portion of the Storm The Citadel trebuchet competition at Summerall Field on Saturday. Gregory Yee/Staff

Competitors make adjustments to a trebuchet at the Storm The Citadel event at Summerall Field on Saturday. Gregory Yee/Staff

Cross High School senior John Roderick and his teammates smiled as they gathered around a throne at Sumerall Field to celebrate their victory.

The small team from Cross, in rural Berkeley County, won first place for distance in the high school division of the annual Storm The Citadel trebuchet competition. Thousands of students in teams from around the Lowcountry gathered Saturday at the college after spending months designing and building the medieval siege weapons.

"It feels really good, especially since this is Cross' first year," Roderick said. "I'm really excited I got to lead them. I feel like if everything goes the way it’s been going, they'll be tough competitors in the future."

The team built their trebuchet over three days in December and continued to make adjustments and other fine tuning leading up to the competition, he said.

Storm The Citadel was founded in 2011 by Google and The Citadel’s School of Engineering to reinforce the disciplines of science, technology, engineering and math.

Teams from middle school, high school and college/professional divisions squared off in competitions based on distance and accuracy of shots fired. The "Barbarian" division, made up of two teams from Google and Boeing, put on displays and fired water bottles, bags of flour and other items from their two massive trebuchets.

Jeff Stevenson, a Citadel graduate and Google employee, founded and organizes the event.

"We're looking for the best technologists, scientists and engineers to work for Google, so in order to have those people coming in behind us, we need to foster that and invest in the community," Stevenson said. "We were looking for something fun to do. You have a lot of engineering skills, a lot of math skills, a lot of science techniques that you apply, and you're applying them in a fun environment. You recognize that it's not just pushing a pencil on a piece of paper."

Storm The Citadel has grown tremendously since its first year when there were about 21 teams, he said. Now roughly 120 teams participate, the event has partnerships with Boeing and Google, and is held in conjunction with the Charleston STEM Festival at Brittlebank Park.

While trebuchets are only one part of the event, which also includes robotics and water bottle rocket competitions, they are the most popular feature. Originally used as weapons in siege warfare, the devices use a lever and a heavy counterweight to hurl projectiles.

"The competition has turned out to be a wonderful, great partnership with The Citadel and the Lowcountry for us," Stevenson said. "We've had teams from the Upstate come here. One year we had a Florida team come, but our primary focus is on the Lowcountry."

Organizers also pay particular attention to schools, such as Cross High, in an effort to provide opportunities for students from rural or disadvantaged areas, he said.

For many teams, the day was less about winning and more about having fun, teambuilding and friendly competition.

Some showed up with unconventional trebuchet designs, such as the murlin built by College Park Middle School's team.

Murlins differ from typical trebuchets because they use spinning momentum in addition to a counterweight.

Deanna Harrell, a science teacher at the Ladson-based school, said they decided to try a different design after running into problems with other methods.

Morgan Karcher, a sixth-grader at College Park, said building the trebuchet has taught her the importance of planning.

Other students, such as Luke Walkaraj, reveled in the atmosphere in addition to taking in the educational experience. The seventh-grader was clad in a foam suit of armor — homage to the school's mascot, the Squires — and dueled his teammates with foam swords during down time.

"I enjoy setting it up with my friends, and I love dressing up," he said.

By the time competition wrapped up around 2 p.m., the students and coaches were exhilarated, celebrating their wins and congratulating each other.

David Peterseim, a parent and coach for the Boy Scouts Troop 502 team from Isle of Palms, summed up the experience after the team won first place for overall design in the high school division and second place for accuracy.

"Look at their faces — they're so engaged, they're smiling," Peterseim said. "I'm proud of them."