Got that invite for an eclipse party? Special viewing goggles? Whoa, maybe not so fast.

There's a 50-50 chance it will be cloudy above coastal South Carolina during the afternoon total solar eclipse Aug. 21, according to an analysis of weather records for the past 10 years done by the federal National Centers for Environmental Information.

Party spoiler? Ronnie Leeper, a research associate working at the centers, laughed and said, hold on.

"It's just the climatology. It can be variable," he said. "Over the previous 10 years, half the time you would have seen the eclipse fine. The other half you'd have had clouds you'd have to look around. I think (Charleston) is so close to the coast you'll have some pop-up clouds, but you'll still be able to see it."

Charleston has a 52.6 percent chance of clear skies, according to the centers.

The prime viewing "zone of totality" — a path about 75 miles wide where the moon is seen to completely cover the sun — cuts a swath across the state in a northwest to southeastly direction. Its center will cross McClellanville, just north of Charleston. 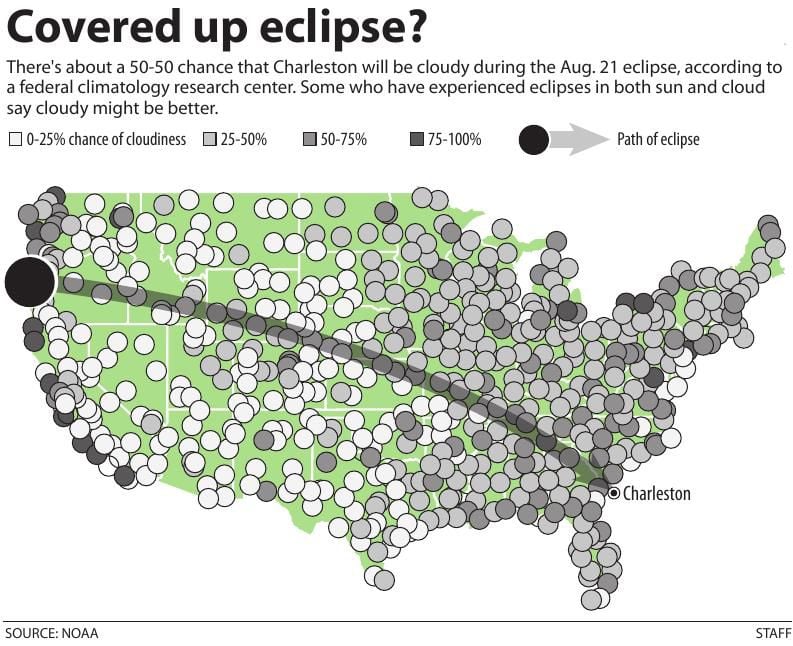 In the study, only one of the other South Carolina cities in the zone fared worse than Charleston: Columbia with a 43.8 percent chance of clear skies.

The odds here are about the same as for the eclipse zone cities on the rainy West Coast. Newport, Oregon, was given a 44 percent chance.

Stargazers in the Lowcountry agree they wouldn't be surprised to find the August eclipse at least partly obscured: Clouds routinely disrupt viewing celestial displays here. And eclipse watching veterans will tell you it just doesn't take much to ruin a good show.

College of Charleston astronomer Terry Richardson drove all the way to Nova Scotia, Canada, to see the 1971 eclipse where he pulled out his gear at a state park under a bright, clear sun.

"Just before 'totality' a little cloud covered up the sun," he said. People a few miles away on any direction could see the eclipse, but he couldn't.

Now, don't fret. If it's cloudy, you still experience an eclipse. Some who have seen an eclipse under both good and bad conditions actually prefer it clouded over. They describe totality as sensing a hole in the sky, having night sweep in suddenly, and then vanish just as fast.

"If the clouds stay even, you can see the shadow of the moon move in and move out, which is pretty cool," Richardson said.

Still there's a lot riding on the weather: up to 1 million visitors to the state are expected for the event.