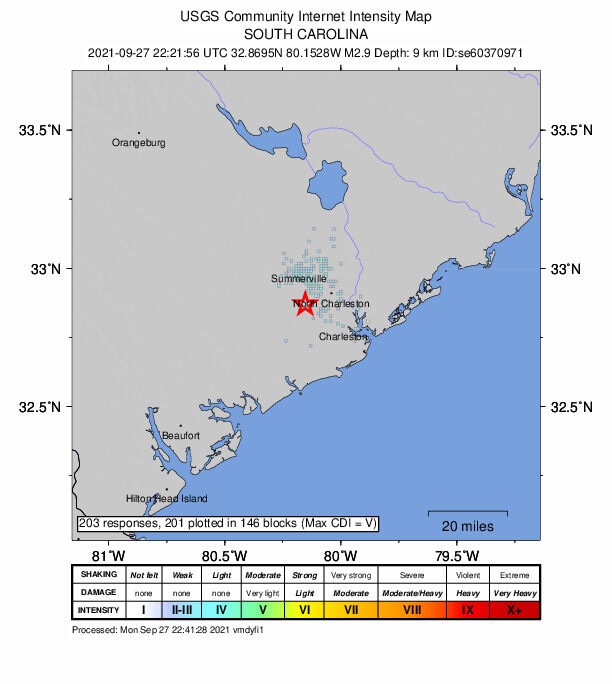 A 3.3 magnitude earthquake struck near the Summerville Ford dealership on the evening of Sept. 27, 2021. U.S. Geological Survey/Provided 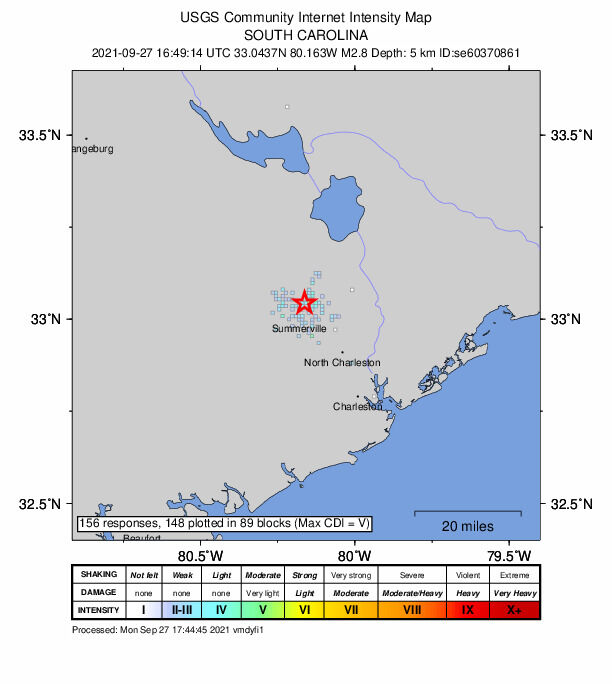 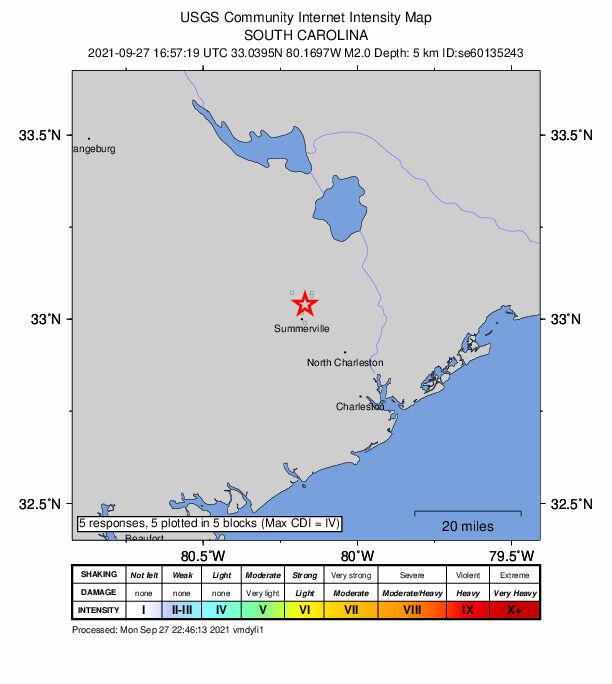 A 3.3 magnitude earthquake struck near the Summerville Ford dealership on the evening of Sept. 27, 2021. U.S. Geological Survey/Provided

SUMMERVILLE —  A 3.3 magnitude earthquake struck the North Area on Sept. 27 with hundreds of residents feeling the temblor but reporting no damage.

Three minor earthquakes in one day

Three earthquakes between magnitude 2.0 and 3.3 occurred on Monday in the Summerville area. SOURCE: USGS

The larger quake struck on the border of Charleston and Dorchester counties at about 6:20 p.m., according to the U.S. Geological Survey.

While some Charleston area residents did not hear or feel the earthquake, others heard a booming noise and saw their windows rattle.

About 258 residents between Summerville and downtown Charleston reported to the USGS by 8 p.m. that evening they had felt an earthquake. Their responses indicate the earthquake was of light intensity.

Its epicenter was determined to be near Summerville Ford on Dorchester Road.

Steve Taylor, a meteorologist for the National Weather Service, said the office in North Charleston had not received any reports of damage. But the meteorologists did feel the earthquake from their headquarters.

"It felt like someone just rammed the building with a vehicle," Taylor said. "Lots of shaking and a loud boom. It was interesting."

Residents in West Ashley and Hanahan also noticed the rumbling, along with Park Circle residents in North Charleston.

A 2.8 magnitude earthquake also occurred at about 12:45 p.m., according to USGS. Its epicenter appeared to be near Thirty Five Mile and Fish roads in Berkeley County, about 7 miles northwest of the Volvo factory and 20 miles northwest of Summerville.

It was followed by an earthquake of 2 magnitude less than a mile away at about 1 p.m.

More than 266 people had notified USGS they had felt the preliminary quake near the Volvo factory. Their responses designated it as "weak" with no reported damage in the area. Four people had felt the second quake. The survey noted this particular data had not yet been reviewed by a scientist.

An employee at the Lebanon Quick Stop off nearby State Road said she had not felt any signs of an earthquake near the Volvo factory this afternoon, and she hadn't seen anything fall from the store's shelves. But the gas station was so busy that employees may not have even realized there was an earthquake, she said.

Two of the three earthquakes were slightly above magnitude 2.5, where some damage could occur.

Climate Change from Greenland to Charleston

Small quakes such as this one are common in the Lowcountry, and the coastal area around Charleston is particularly vulnerable to quakes.

The epicenter of the 3.3 magnitude earthquake is thought to be near the same area as the devastating 1886 quake that killed 100 people, leveled nine of every 10 brick buildings in Charleston and damaged nine of every 10 in Summerville.

Three faults underground converge on each other somewhere below the Ashley River near Middleton Place. The edges of tectonic plates pressing against each other launch the temblors.

The Sept. 27 earthquakes were the 10th, 11th and 12th to strike South Carolina since July 27, all of which were considered minor, according to the South Carolina Geological Survey.