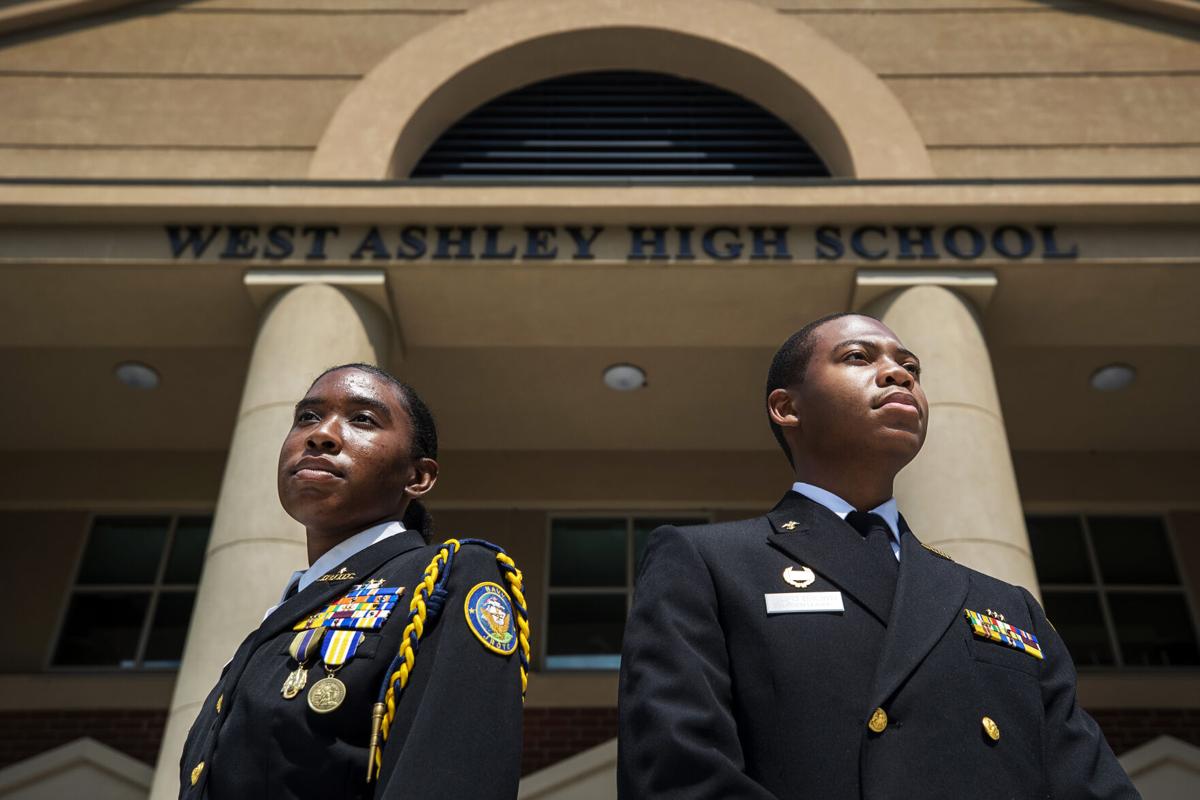 Saniyah Drayton and Darius Brown are pictured outside of West Ashley High School on June 16, 2021. The 2021 graduates both received more than $180,000 in scholarships to participate in a Navy ROTC program. Lauren Petracca/Staff 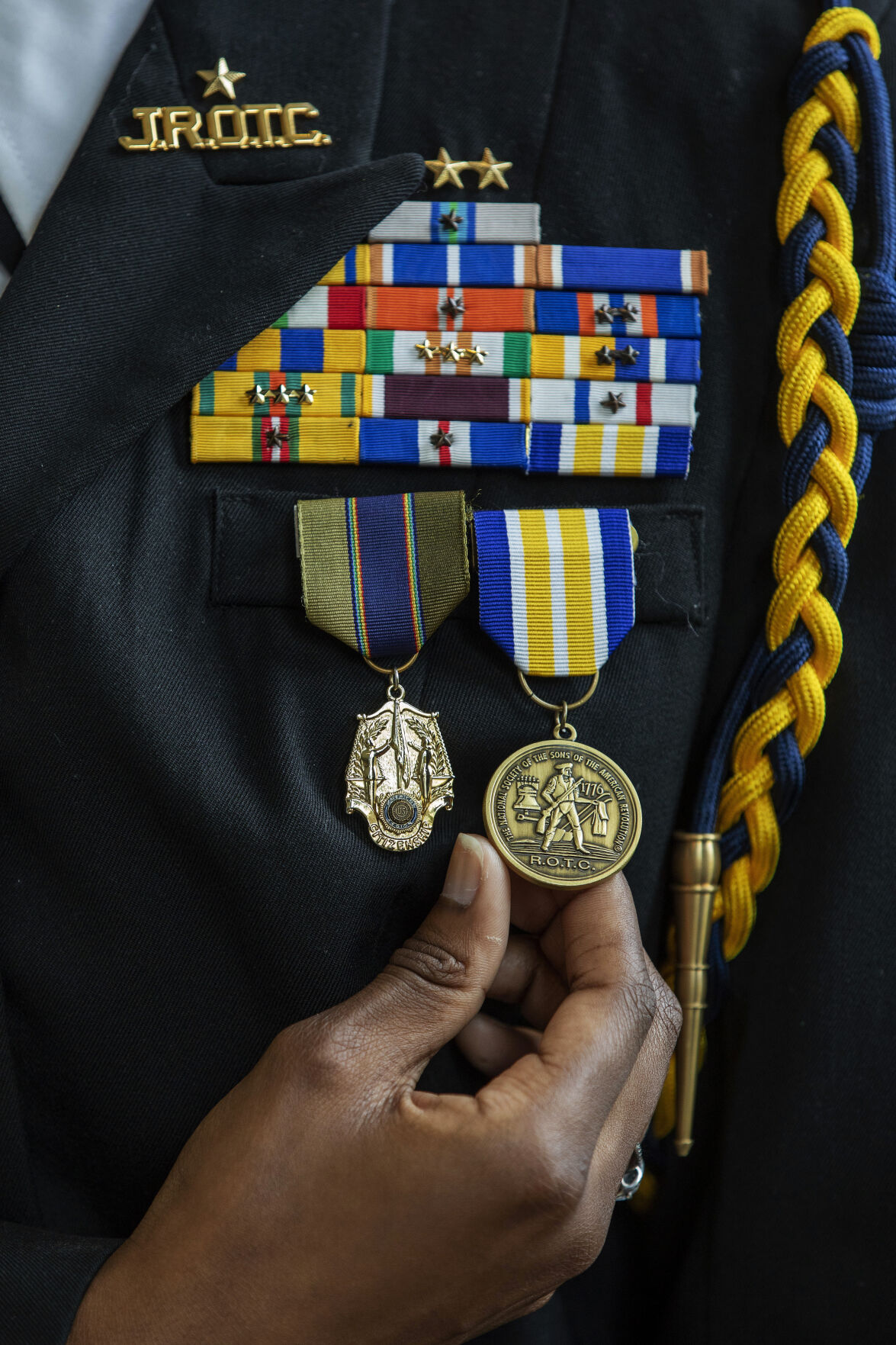 Saniyah Drayton holds a medal on her JROTC uniform as she poses for a portrait at West Ashley High School on June 16, 2021. Drayton, a 2021 graduate, received more than $180,000 in scholarships to participate in a Navy ROTC program. Lauren Petracca/Staff 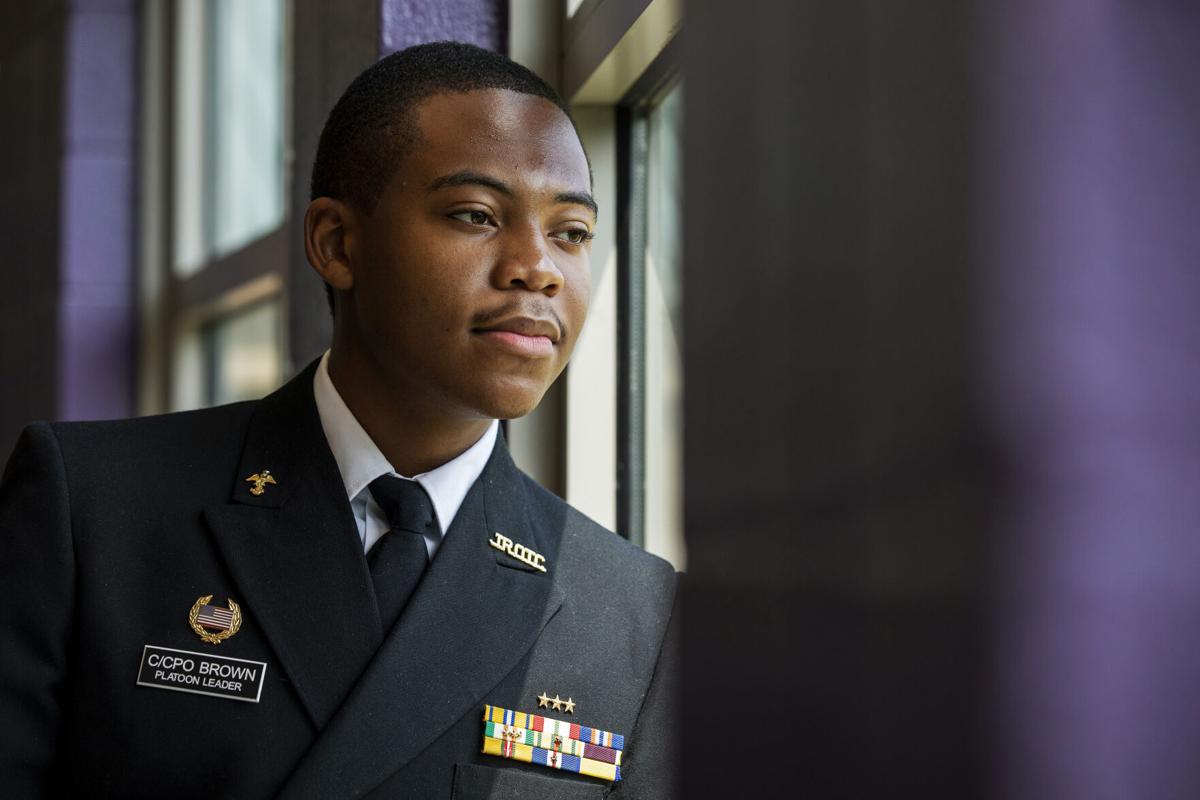 Darius Brown is pictured at West Ashley High School on June 16, 2021. Brown, a 2021 graduate, received more than $180,000 in scholarships to participate in a Navy ROTC program. Lauren Petracca/Staff 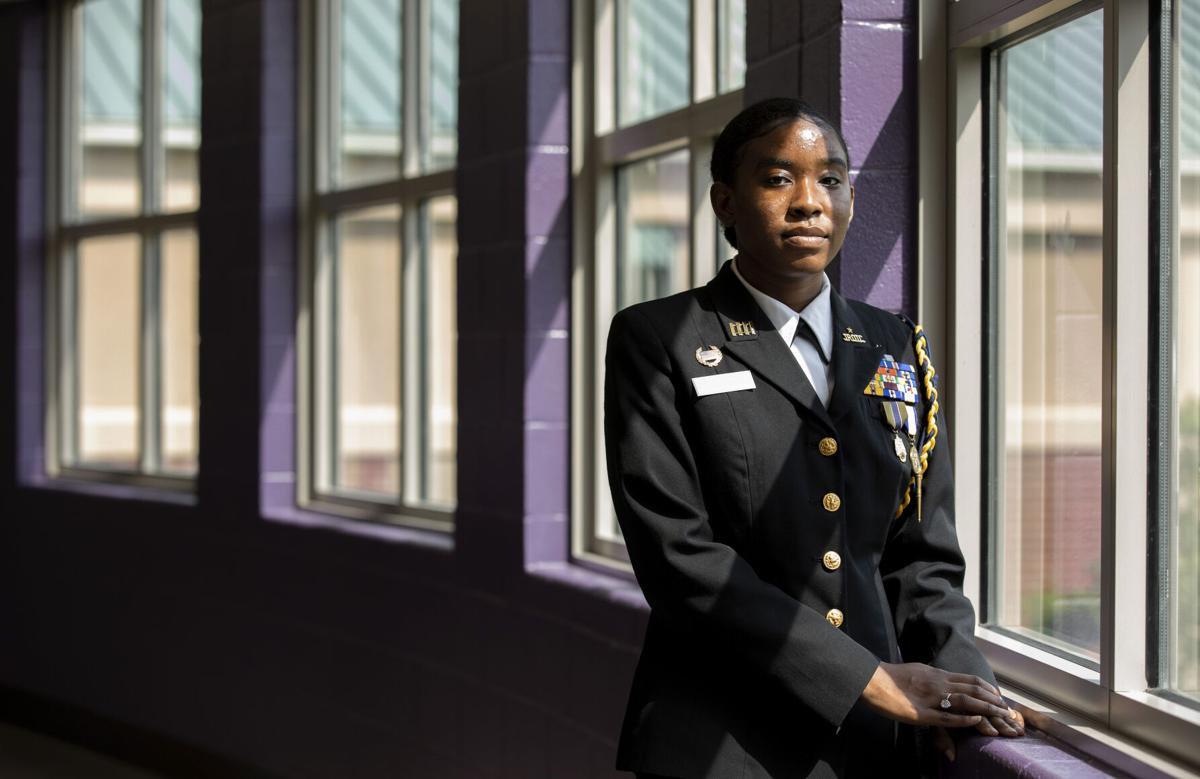 Saniyah Drayton is pictured at West Ashley High School on June 16, 2021. Drayton, a 2021 graduate, received more than $180,000 in scholarships to participate in a Navy ROTC program. Lauren Petracca/Staff

If you ask Principal Ryan Cumback, he’ll say that Saniyah Drayton and Darius Brown are the “best and brightest” that West Ashley High School has to offer.

“Every blue moon, you get those cadets that stand out amongst the rest,” Davis said. “From the beginning of freshman year, they stood out.”

Drayton and Brown’s qualities weren’t just noticed and admired by their teachers. They earned each student more than $180,000 in NROTC scholarships for their upcoming college careers.

The two students are the first in the school’s history to receive the scholarships. They each had to meet academic and physical standards. For Brown, that meant doing a minimum of 62 situps, 51 pushups and running a mile in 11 minutes.

Contribute to the education discussion

Join our Facebook group for constructive discussion on education news in the tri-county area of Charleston, Berkeley and Dorchester. Our reporters covering education will be in the group to help lead and moderate conversations.

Drayton, who had different physical standards because she is a woman, had to do 62 situps, 24 pushups and run a mile in at least 13 minutes and 30 seconds.

The two students also had to achieve at least 2.75 grade-point average, an 1100 on the SAT or a combined reading and math score of 44 on the ACT. The application process in itself required focus and discipline from the two cadets.

Brown received the NROTC National Preparatory Program Scholarship, which will cover his tuition at Southern University and A&M College in Baton Rouge, La.

Drayton received the NROTC National Minority Scholarship, which will cover the costs for her to attend Florida A&M University in Tallahassee. Both of the scholarships require the cadets to be involved in ROTC throughout their college career and serve at least five years in the Navy.

For both students, the scholarships mean future financial stability and the opportunity to go to college before serving as officers. Both Brown and Drayton said they would have enlisted in the military had they not gotten the scholarships.

“I don’t even know if I still grasp the idea that I get to go to school for free,” Drayton said. “To be the first here to do it and to be the first in my family, I think it’s really cool for me.”

The scholarships are more than just a financial opportunity for the two students. Both felt a desire to continue participating in ROTC, as the program helped shape them throughout high school.

For the past four years, the students have been spending much of their time in the school’s NJROTC classroom, where they have developed deep relationships with their instructors and fellow cadets.

“From the first day that I walked into the ROTC classroom on the 600 hallway of this school, I’ve been in love with the program,” Brown said.

Both Brown and Drayton said the program’s dedication to teaching students teamwork, leadership and discipline helped them to be successful in their careers.

The students took the ROTC lessons in stride, Davis said. They both showed exceptional leadership and a desire to help others and volunteer. Above all, the two students are team players.

"They took to ROTC like a duck to water when it came down to it," Davis said.

The program teaches students to “begin with the end in mind." Without that mantra, Drayton doesn't know if she would have earned her scholarship.

“I knew that at the beginning I wanted to get a scholarship,” Drayton said. “And now here I am, four years later, with the scholarship. (It taught me) the importance of having discipline within your life to do things, try new things and be structured to get where you want to be.”