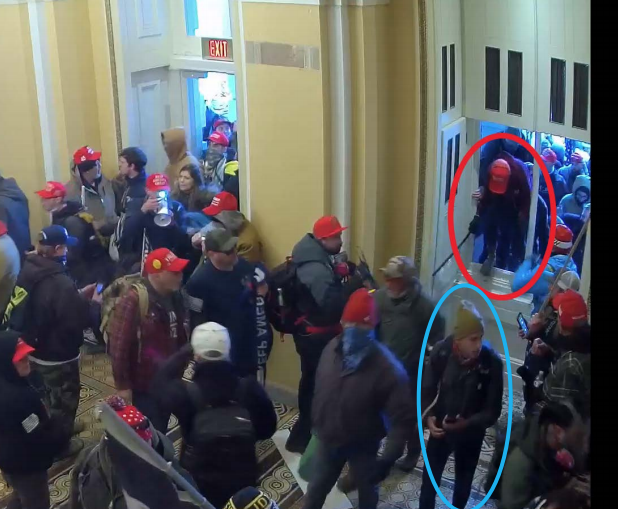 Federal authorities said this is a photo showing Elliot Bishai (blue circle) inside the U.S. Capitol on Jan. 6, 2021, as Elias Irizarry (red circle) climbs through a broken window. The pair were charged this week for their role in the riot. U.S. Justice Department/Provided 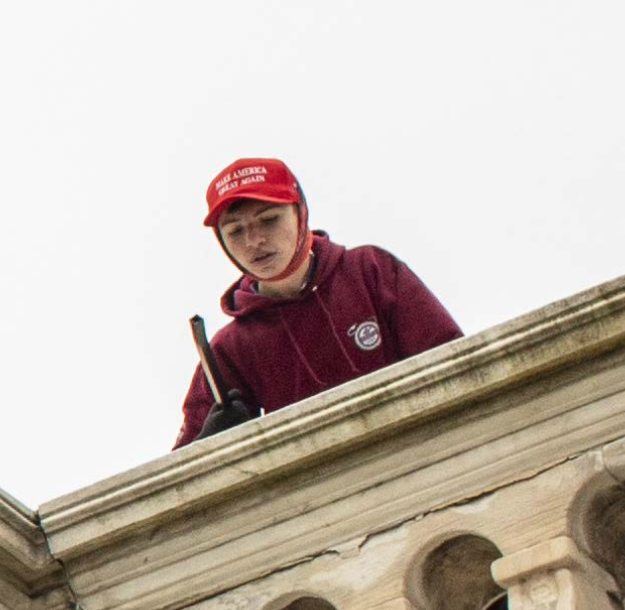 Federal authorities allege the man holding a metal pipe in this photo taken during the Jan. 6, 2021, U.S. Capitol breach is Elias Irizarry. Irizarry, a cadet at The Citadel, was one of two South Carolina men charged this week with participating in the riot. U.S. Justice Department/Provided 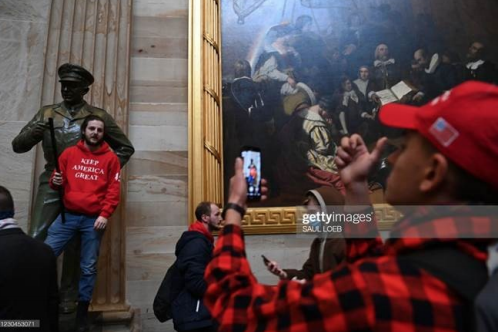 Federal authorities said this is a photo of Elliot Bishai of Fort Mill taking a photo of Grayson Sherrill next to the Dwight Eisenhower statue inside the U.S. Capitol during the Jan. 6, 2021, riot. Bishai was charged this week. Sherrill of Cherryville, N.C., was charged March 1, 2021. U.S. Justice Department/Provided

The men are not accused of any direct acts of violence during the Jan. 6 riot.

They were released on $25,000 unsecured bond after a hearing March 16 at the federal courthouse in Columbia. They have another hearing March 22. The men said nothing during the hearing.

Irizarry, 19, is a freshman at The Citadel who has hometowns in Fort Mill and just outside Los Angeles. He remains a cadet at the school pending an investigation, a spokeswoman said.

Irizarry received a gold star from The Citadel after earning a grade-point average of 3.7 or more in the fall semester, according to a school news release. On his Facebook profile he posted he is studying security and intelligence studies at The Citadel.

His father is veteran soap opera actor Vincent Irizarry, who appeared for years in "All My Children" and "Guiding Light."

Bishai, 20, also is from Fort Mill. He was slated to attend Oklahoma State University in its ROTC program with plans to become an Air Force pilot, according to a Facebook post for the Gastonia Civil Air Patrol.

He now has been accepted into an Army flight program and was scheduled to start training at Fort Jackson later this spring, his father, Hani Bishai said.

The two men are said to have traveled to Washington, D.C., with Grayson Sherrill, of Cherryville, N.C., who also faces federal charges for breaking into the Capitol. The FBI was told Sherrill's father shared a screen grab of his son inside the Rotunda with relatives, according to a federal complaint.

Hani Bishai and Lorraine Irizarry, Elias' mother, told reporters after the hearing their sons did not intend any harm and were swept up in the hundreds who stormed inside the Capitol to protest the results of the 2020 presidential election won by Democrat Joe Biden.

The parents said their sons, who are accused of committing misdemeanors, were being lumped in with other Capitol rioters charged with acts of violence.

“When you hear them say things about your child like that, and he’s put in with others that did so wrong, it’s hard,” Lorraine Irizarry said.

“I think there were many bad actors and what happened shouldn’t be taken lightly,” Hani Bishai said, but he felt sending a large contingency of officers to search the home where he lives with his son was excessive.

An unidentified witness sent a tip to the FBI identifying two men inside the Capitol as Bishai and Irizarry, according to papers filed in federal court. The witness, along with two others, knew the men from a Civil Air Patrol unit. They told the FBI they recognized clothing the men wore at the Capitol.

One witness said based on their location on the social media app Snapchat, that Bishai and Irizarry were in Washington on Jan. 6. A relative of Bishai's said he took selfies at the Capitol on Jan. 6, according to the complaint.

They are seen in photos and videos entering the Capitol through a broken window, walking around halls and taking photos next to a statue of Dwight Eisenhower, the complaint said.

At least two other South Carolinians have been arrested for their roles in the Capitol breach.

William Robert Norwood III, 37, of Greer faces charges including theft of government property for allegedly stealing an officer’s helmet and tactical vest, which an FBI agent said were later found in a storage trailer in Greenville.

Andrew Hatley was charged with breaking into the U.S. Capitol after an investigation that relied on GPS data and a selfie the man allegedly took while inside the building.