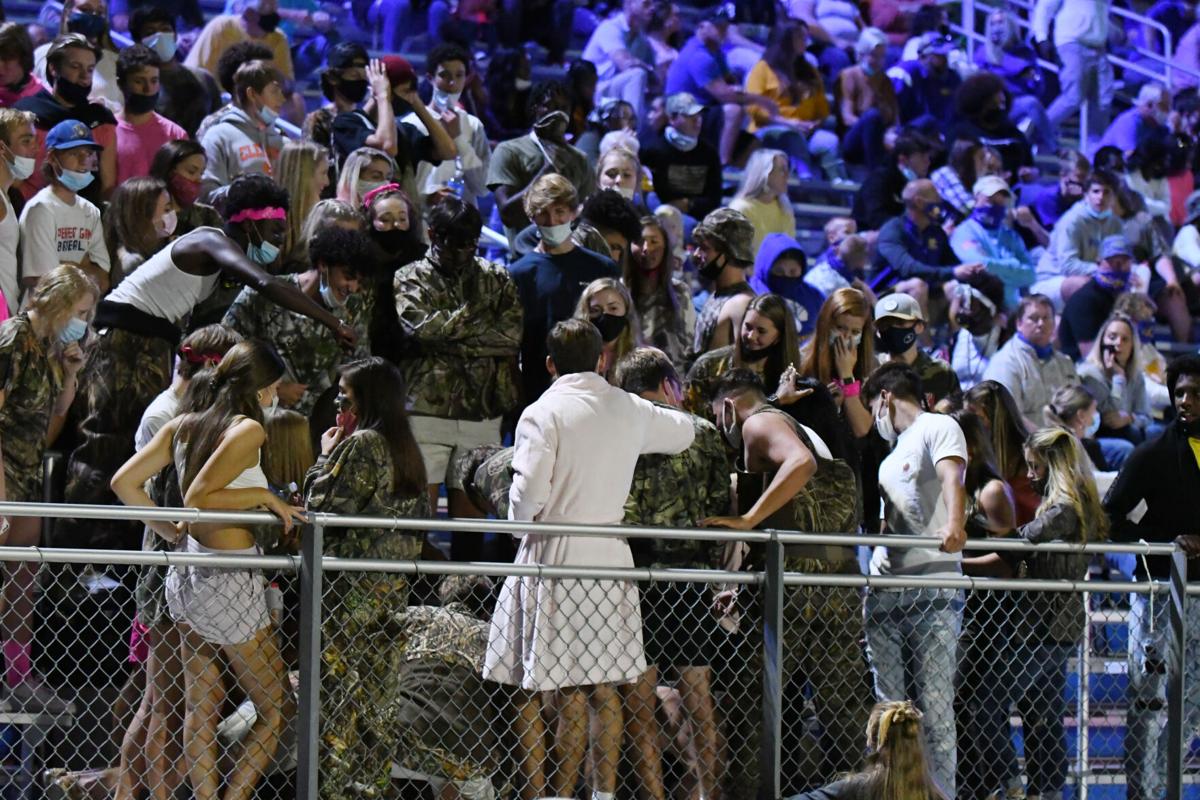 The North Myrtle Beach High student section during Friday's game against West Florence. They are watching two students participate in a push-up contest. 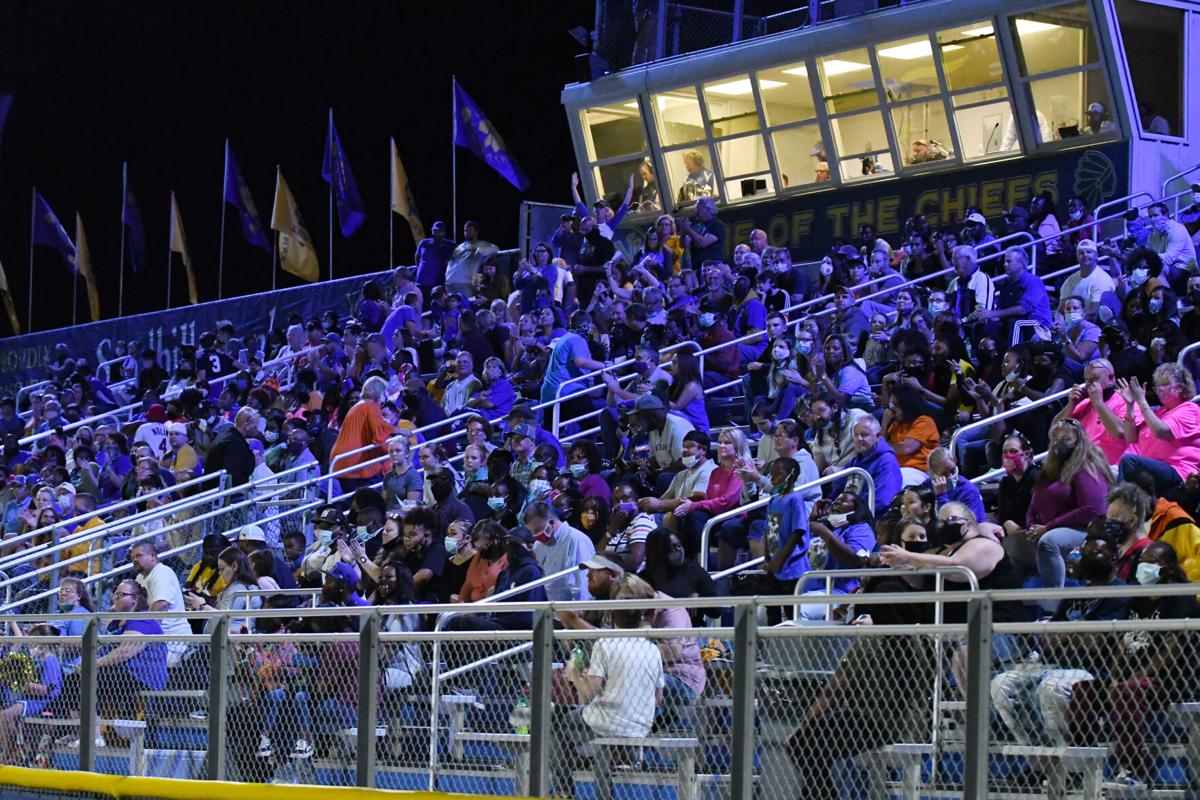 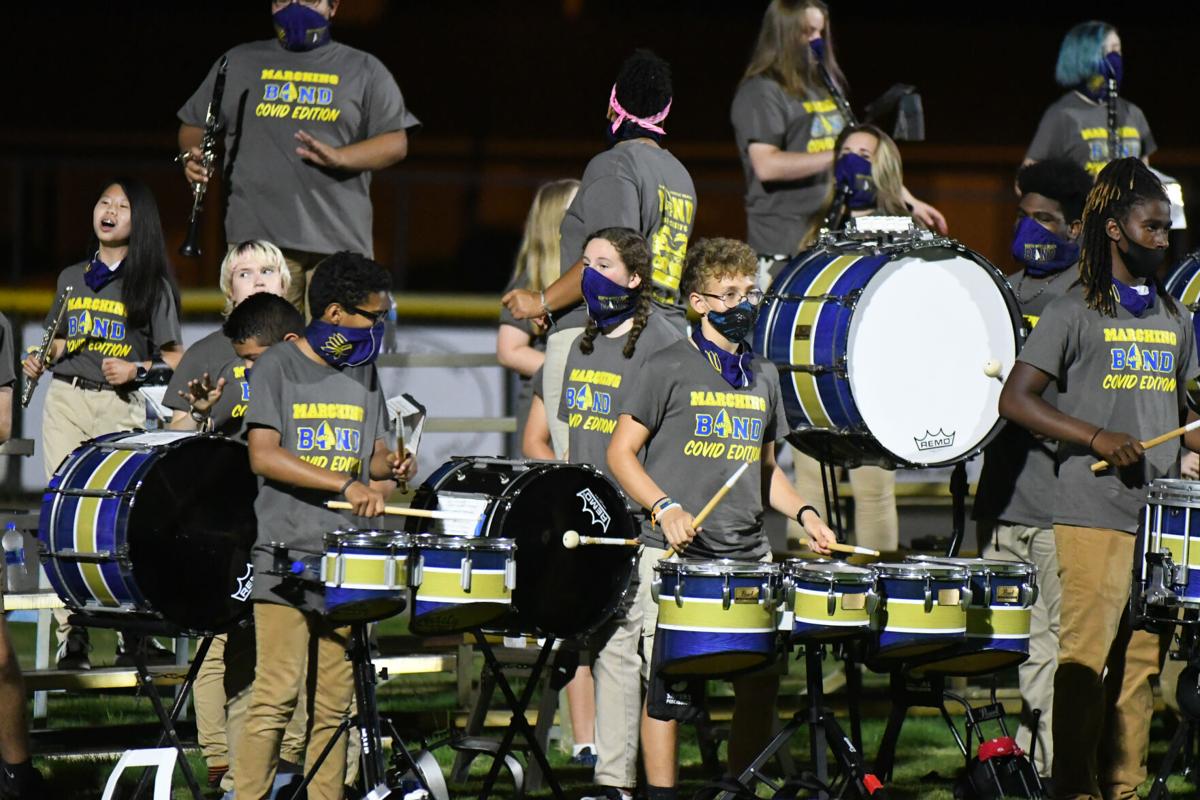 The North Myrtle Beach High marching band performed on the field and behind the visiting end zone. 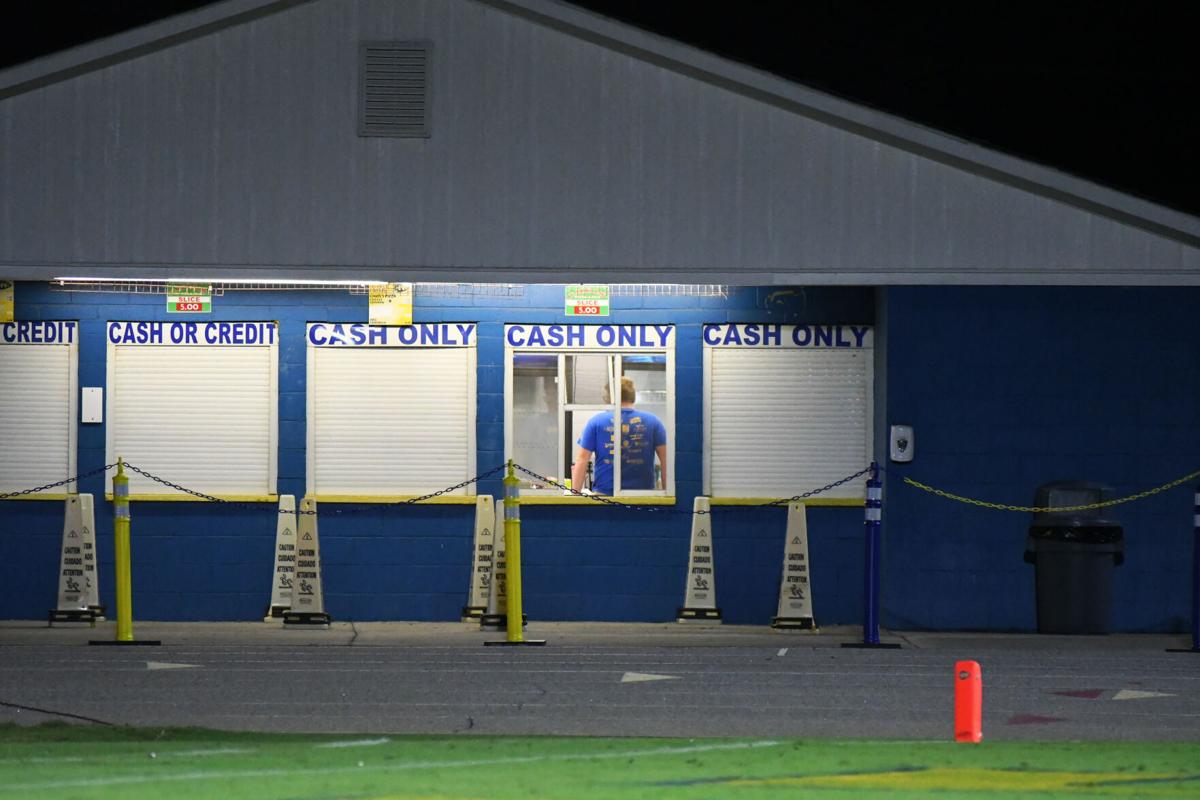 The concession stand on the visiting side at North Myrtle Beach High. 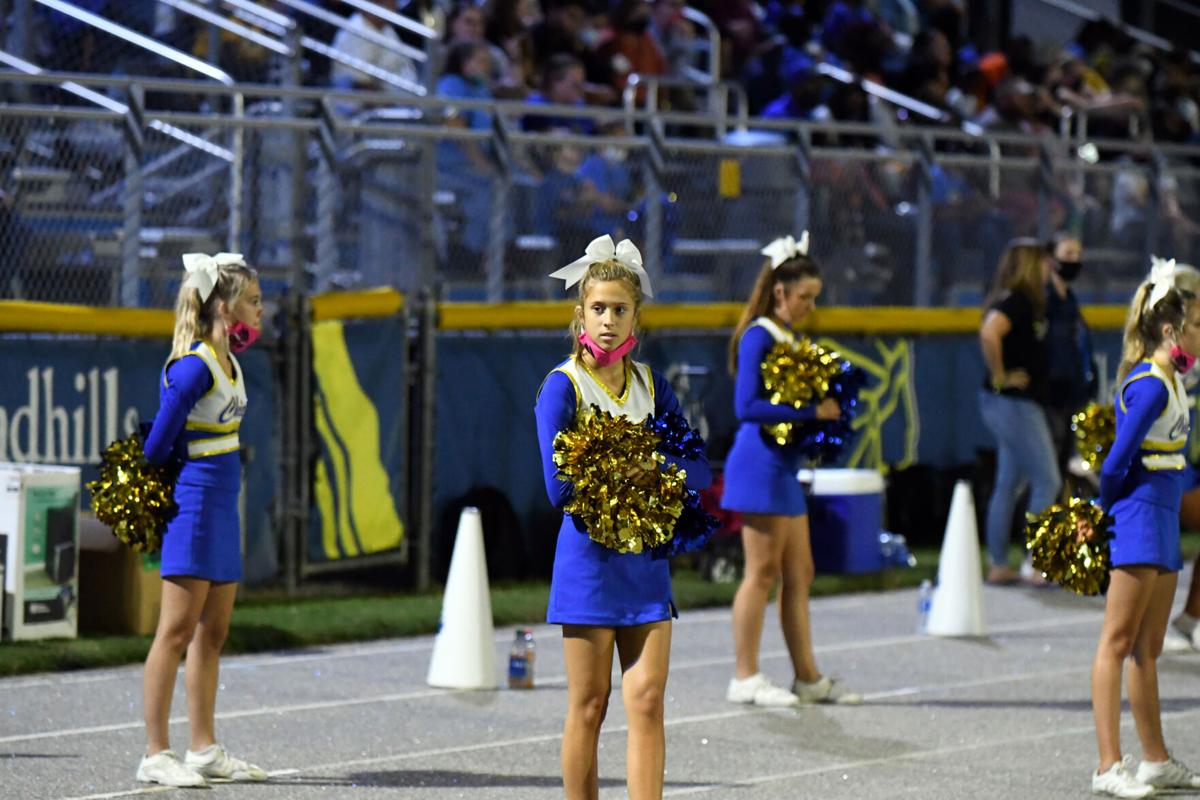 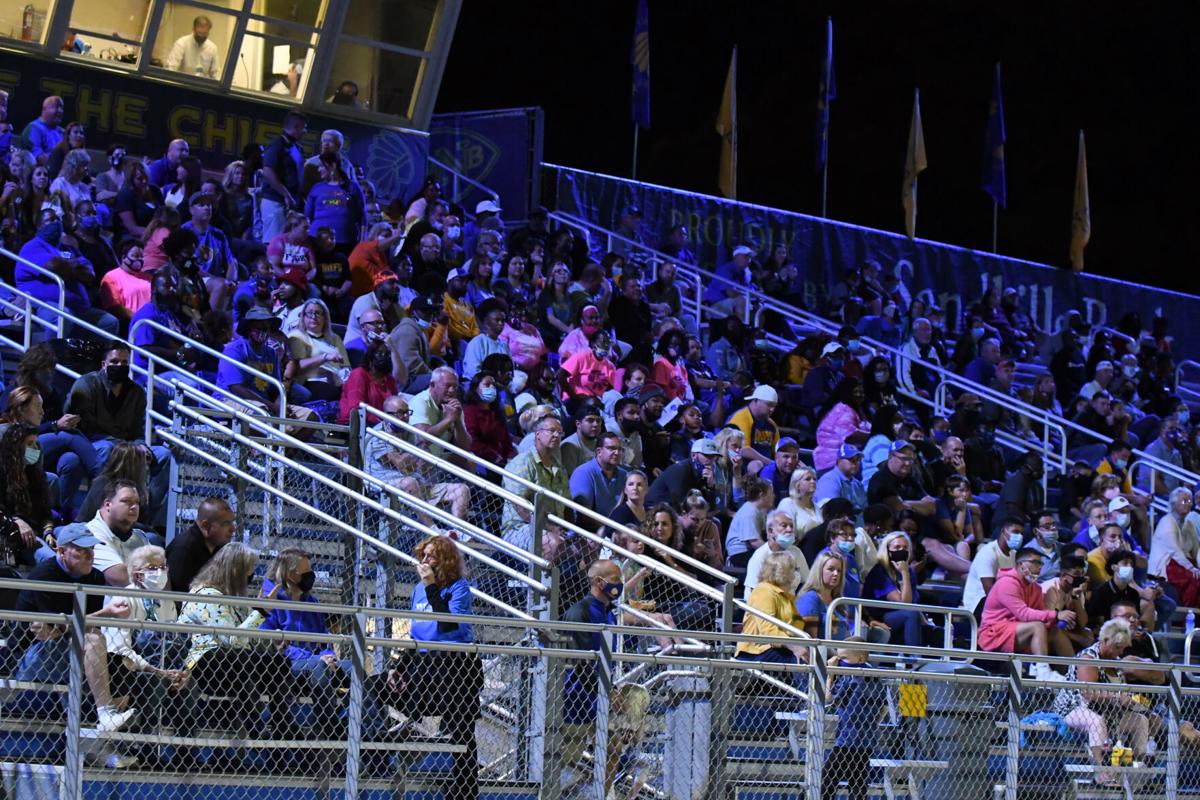 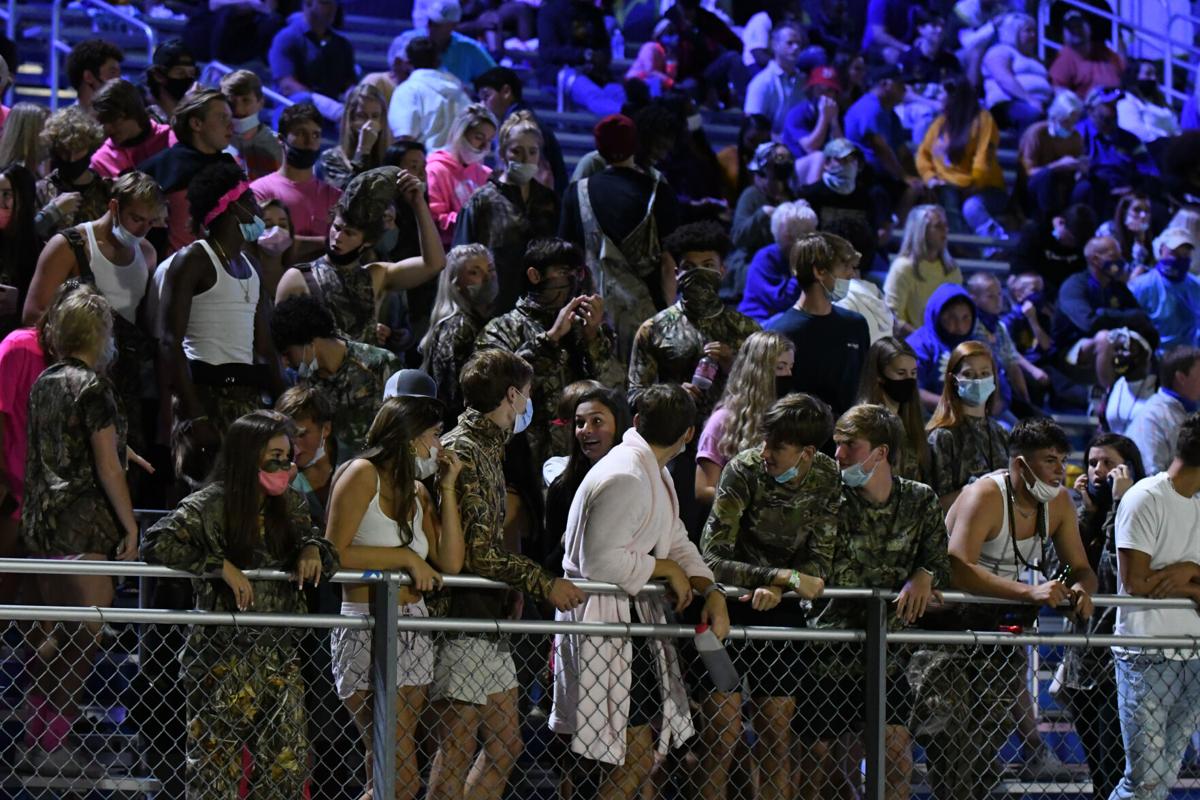 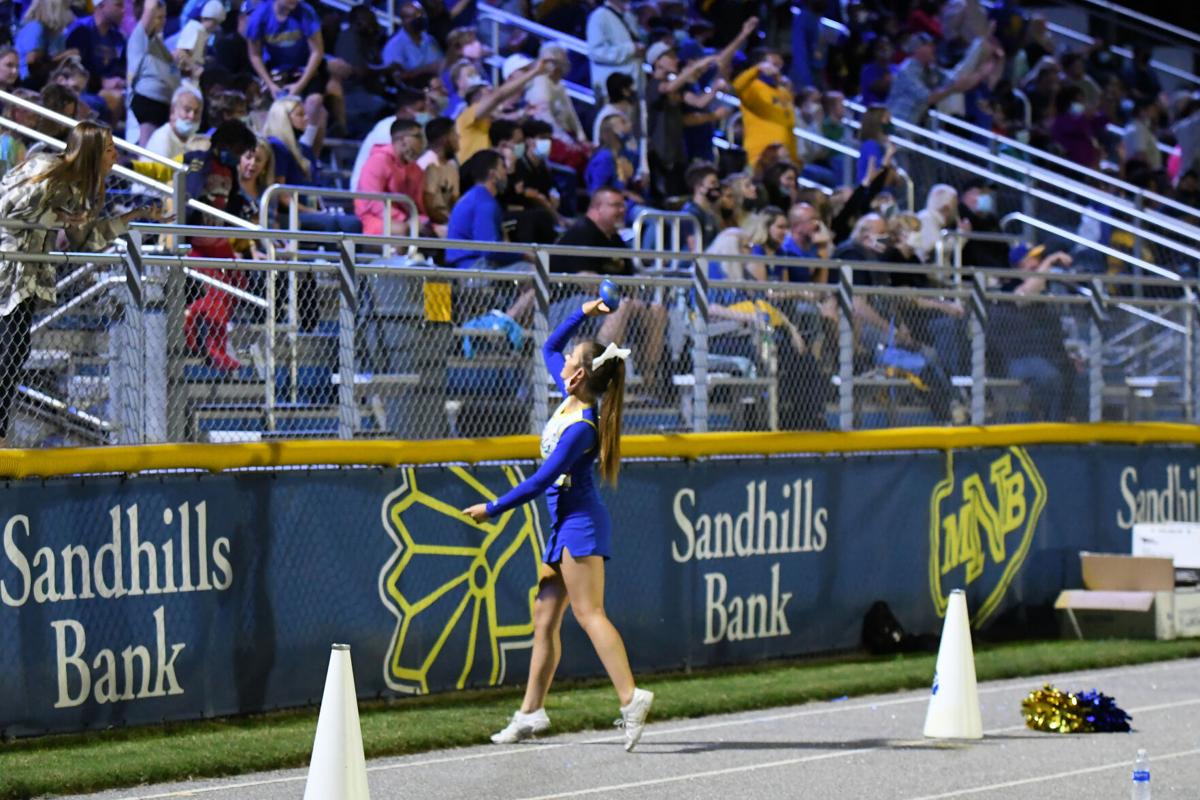 The North Myrtle Beach High cheerleaders during Friday's game against West Florence. Here, a cheerleader is throwing a foam football into the stands. 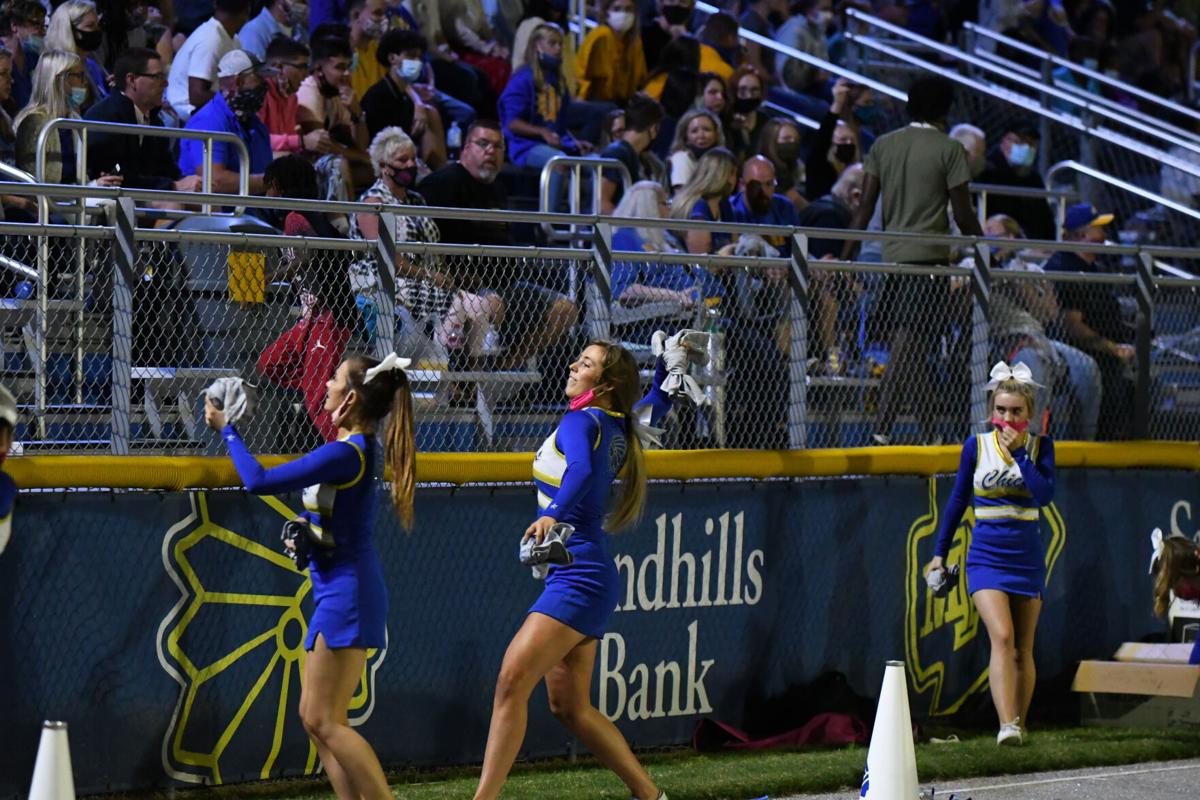 The North Myrtle Beach High cheerleaders during Friday's game against West Florence. Here, cheerleaders are throwing T-shirts into the stands. 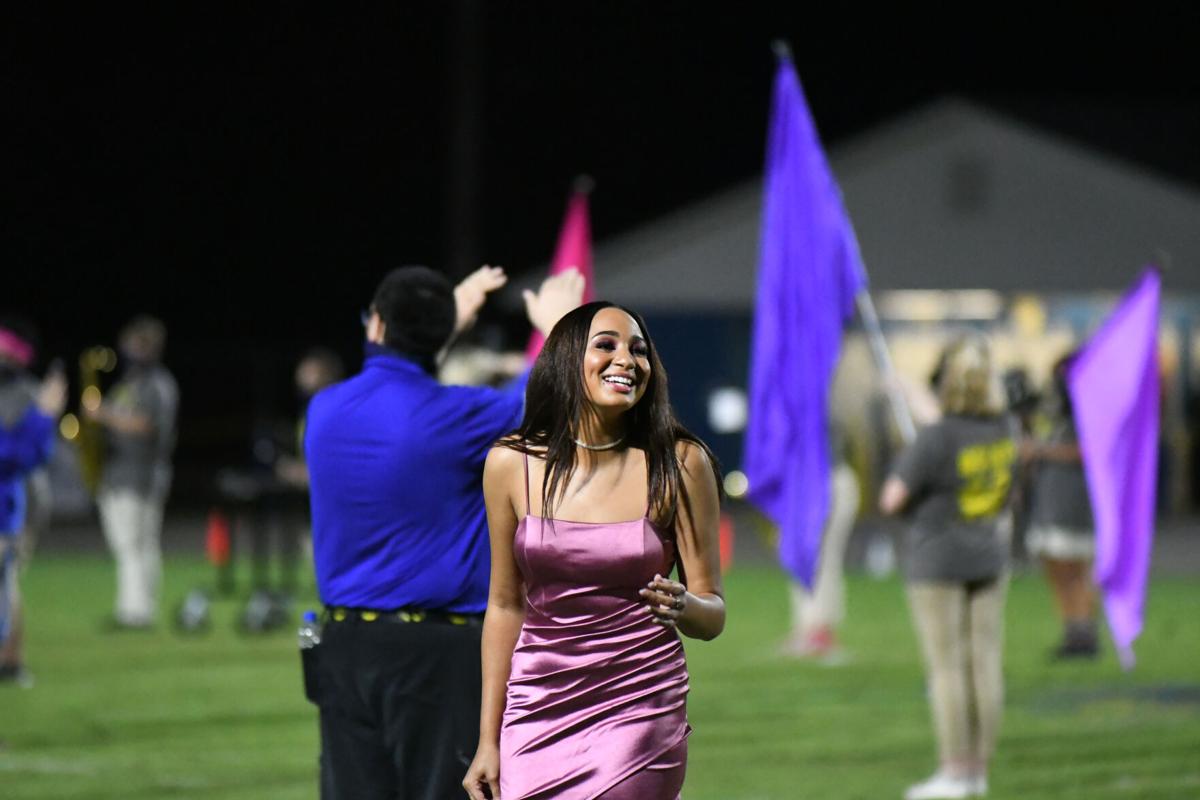 Homecoming Court was held at halftime of the North Myrtle Beach-West Florence game on Friday night. 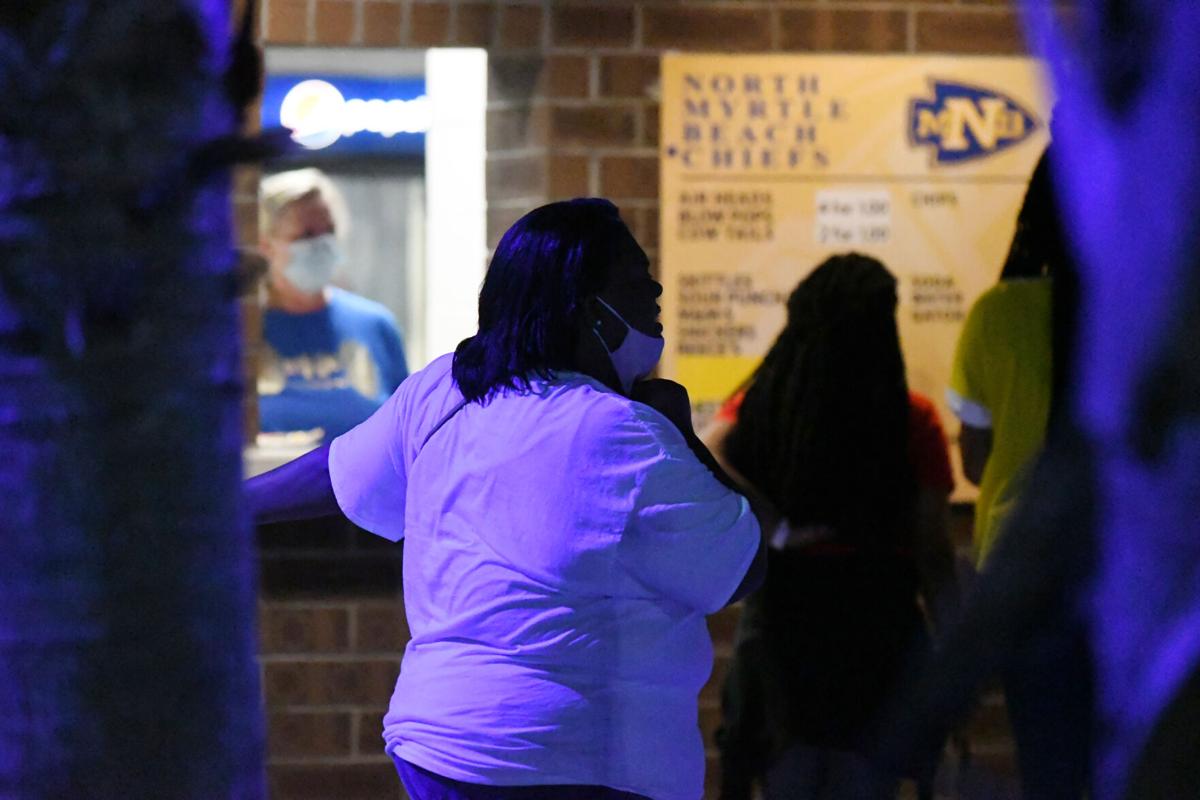 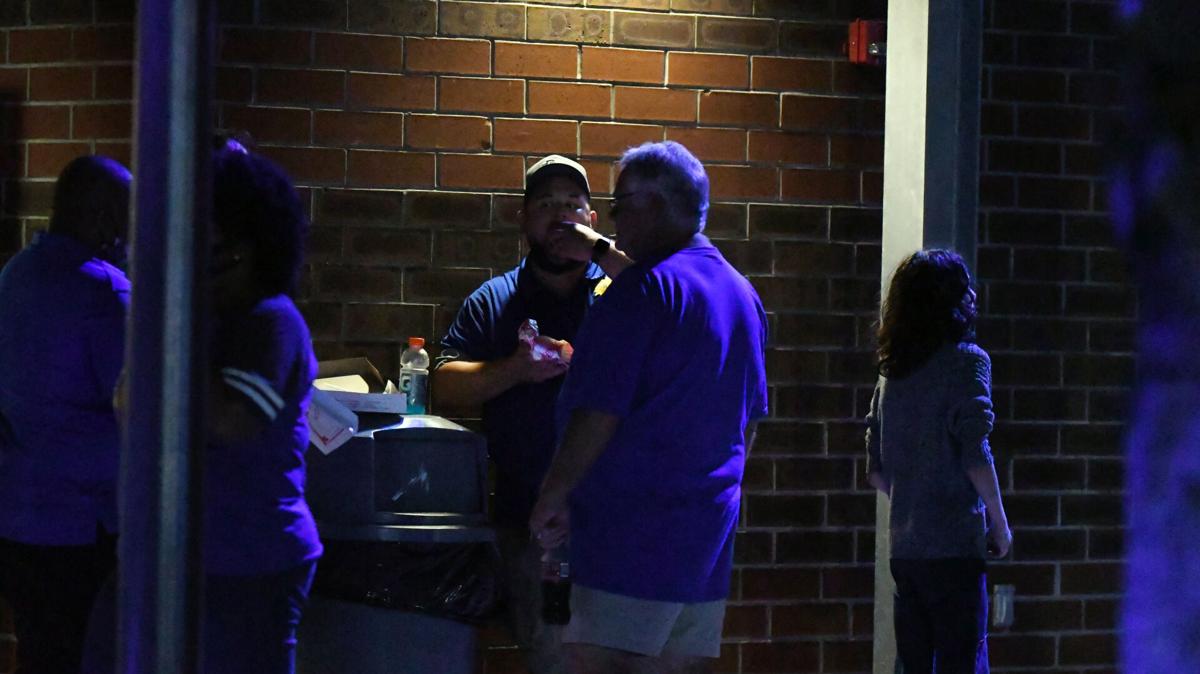 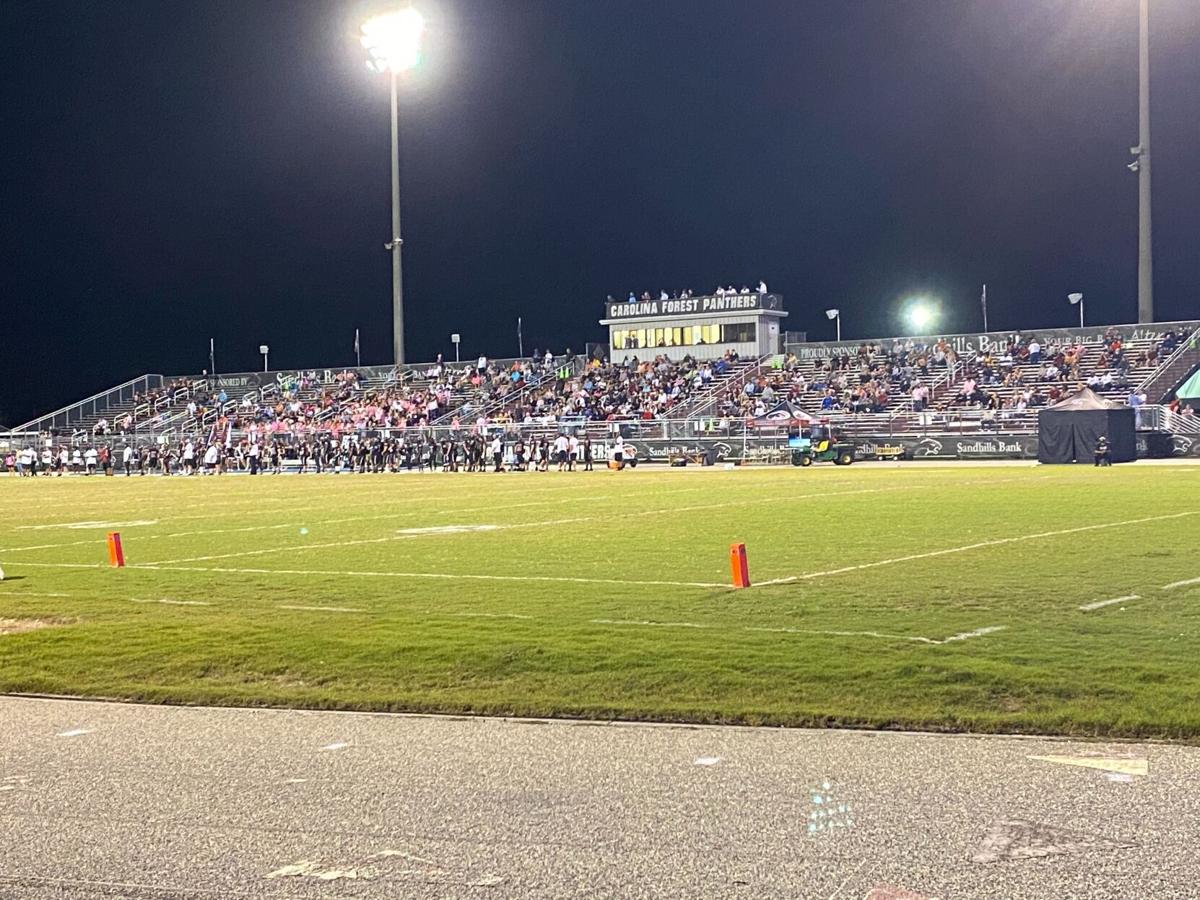 The home stands for the St. James at Carolina Forest game on Friday night.

The North Myrtle Beach High student section during Friday's game against West Florence. They are watching two students participate in a push-up contest.

The North Myrtle Beach High marching band performed on the field and behind the visiting end zone.

The concession stand on the visiting side at North Myrtle Beach High.

The North Myrtle Beach High cheerleaders during Friday's game against West Florence. Here, a cheerleader is throwing a foam football into the stands.

Homecoming Court was held at halftime of the North Myrtle Beach-West Florence game on Friday night.

NORTH MYRTLE BEACH — With the United States having the worst single-day rise in cases since COVID-19 began — more than 85,000 cases were reported on Friday, surpassing the previous record by 10,000 cases set on July 16 — and the community of North Myrtle Beach reeling from a potential superspreader event along Main Street, all eyes were on the North Myrtle Beach High football game Friday night, and not just because it had all the makings of a good football game.

The game, also in the shadows of the North Myrtle Beach Middle School football team already having to postpone its Monday game due to five members being in quarantine, offered a glimpse into how health protocols would be followed amid the recent rise in COVID-19 all over Horry County.

And the results were a series of questionable decisions, from crowd size to the monitoring of personnel on the field as North Myrtle Beach welcomed West Florence to The Hank.

North Myrtle Beach wasn’t alone in seemingly looking the other way on the protocols and suggestions set forth by the South Carolina High School League — the governing body for the state’s high school athletics — as much the same was observed as Carolina Forest hosted St. James, with the Panthers doubling down on prior crowd-control issues.

On this Friday night, the focus of The Post and Courier Myrtle Beach’s series, Friday Night Lights Unmasked, turned to these two games, and here is what was found:

Just about 33 minutes prior to kickoff, the entire lineup of North Myrtle Beach Chiefs gathered near the home end zone, most watching the offense complete their red zone drills.

All had their skin-tight workout gear on, leaving their shoulder pads in the locker room.

That went against the SCHSL’s “Best Practices Guide” that it released prior to the fall season.

“Athletes, coaches, and staff should come dressed for participation. Use of locker rooms should be coordinated to allow for physical distancing when using the lockers,” the guide said.

Just moments prior, the school seemingly set itself up for success by having home and visiting fans enter through different entrances, with barriers keeping the two separated as you make the long walk into the sports complex. But, at the fork, all semblance of enforcement goes away, as fans can go in any direction they so choose, with signs as the only barrier from doing so.

With what would become a common theme, no administrators or law enforcement officials were visible in helping maintain the school’s attempt at best practices.

The looseness of the night continued as the entire band of referees posed for a picture on the sidelines, sans masks. Those masks, for the most part, would also stay on the chins of many as the game went on.

And as the clock ticked toward opening kick-off, the large crowd awoke amid a “tomahawk chop,” with both students and school band members struggling to keep their masks on as they waived their hands in the air and chanted loudly.

The student section — with little mask use and no social distancing whatsoever — was rowdy from the outset, yelling at their opponents from their perch, while doing push-up contests in the stands as students yelled down at those participating. No administrators attempted to socially distance the group, instead letting them enjoy their homecoming.

“Member schools should require that all fans wear facial coverings at all times while onsite (except children under age 2) and maintain social distancing (six feet, or the equivalent of two empty seats between themselves and other fans) from anyone other than those living in the same household,” the SCHSL’s guide said.

The home stands were at least 80 percent full, with the majority utilizing masks, although social distancing was not prevalent. The school’s public address announcer reminded the crowd multiple times that adherence to health protocols would allow fans to continue to attend games.

With Horry County seeing a significant rise in COVID-19 cases — the daily average number of cases has tripled month-over-month, including the worst single day since July 24 with 116 cases reported on Oct. 10 — the week leading up to the game saw the school celebrate seeing its home game sold out.

On the field, a cheerleader could be heard telling the rest of the squad, “When we are cheering, keep your masks down!” After that moment, it was observed that many never came back up.

Behind the visitor’s end zone, the NMB marching band played throughout the contest, with the drummers not socially distant, while a handful of members did not use their masks, albeit hanging on their chin or not visible at all.

During the game’s opening coin flip, the players stayed socially distant as they watched the coin fly in the air, only to hug one another moments later.

“When possible, personal contact should always be avoided. This includes, but is not limited to high-fives, handshaking, fist-bumping, and chest-bumping,” the SCHSL said.

After three second-quarter touchdowns by NMB’s Xavier Anderson, the chest-bumping was commonplace for the Chiefs’ squad, celebrations that would have not turned heads in 2019, but push boundaries in 2020.

When back on the sideline, players were not utilizing masks, although the SCHSL had made that recommendation.

“(Players) should wear a face covering when not actively participating in the sports activity,” the governing body said. “When possible, team bench areas should be arranged so access is for team personnel only. In addition, bench areas should accommodate proper physical distancing. When not feasible, other mitigation methods, such as facial coverings, may be implemented.”

Just a few feet behind the players, cheerleaders continued to perform without masks, while also throwing foam footballs and T-shirts into the stands — not only potentially sharing germs, but also creating a chaotic scene in the crowd as fans attempted to acquire one of the freebies.

As they did this, a small group of potential Homecoming queens congregated behind the home end zone, all outfitted in gowns and masks. But as the team headed into halftime, the court took off their masks and walked across the field, through the school’s band and past a handful of school administrators.

The court would stand socially distanced in front of the home crowd, but didn’t put their masks back on as the runner-ups and winner were announced.

And those not watching the Homecoming Court were getting food or using the restroom, with the former showcasing students wearing no masks while embracing each other in food-truck lines, with adults eating their meals near food lines.

Active cleaning of restrooms was not observed.

Carolina Forest blasted a couple of Kanye West's top tracks from earlier in the century over its speaker within a few minutes of each other. As the second song, the intro to Black Skinhead from West's Yeezus album, blasted amid cheers and chatter from fans, it was clear by apparent mask usage many people thought it was still 2013 when the album dropped.

Maskless fans could be seen in almost any direction inside the Carolina Forest Panthers' football stadium on Friday night against the St. James Sharks.

In fairness, plenty of people — likely the majority — at the game had masks on and wearing them properly.

But for a sizable portion of the crowd, particularly on the home side, masks could be seen, but that's about all that can be said. There were some clear violations of mask requirements to enter the stadium and distancing between seating.

In the center of the home side, a group of young people congregated in the middle of the stadium — standing, cheering and supporting the Panthers through every play. But there were plenty of people in the cheering section completely unmasked or with their mask firmly planted below their nose.

Some people chose not to sit in designated rows because it helped them to distance themselves from the crowds forming in the center of the stands. While a technical rule violation — but with no enforcement — these improvisations might have kept the crowd more separated than the only sitting on small stickers that were not six feet apart.

During halftime, the maskless crowds took to the concessions area as large crowds quickly formed. The marching band didn't perform and cheerleaders did a good of keeping their masks on while in the crowd during the half.

The Thespian Society was selling new masks of various styles to fans. All of the people selling masks were wearing masks.

Unlike in other stadiums, there were not public safety officers standing at the stairs reminding folks to mask up and spread out. Even those wearing masks sometimes dropped them to cheer on the team.

Except for the concessions area, few police officers could be seen stationed around the stadium.

The visiting squad, St. James, already dealt with a week of headaches after its JV squad traveled to Sumter for a game despite knowing it had two active cases of COVID-19 on its team. Since, Horry County Schools and the Sumter School District have differed over whether or not both teams were aware of the cases.

While the music choices harken back to the not-so-distant past, and people continue to not wear their masks as the football season enters its final weeks, the 2020 season remains abnormal for Carolina Forest even if some fans insist otherwise.