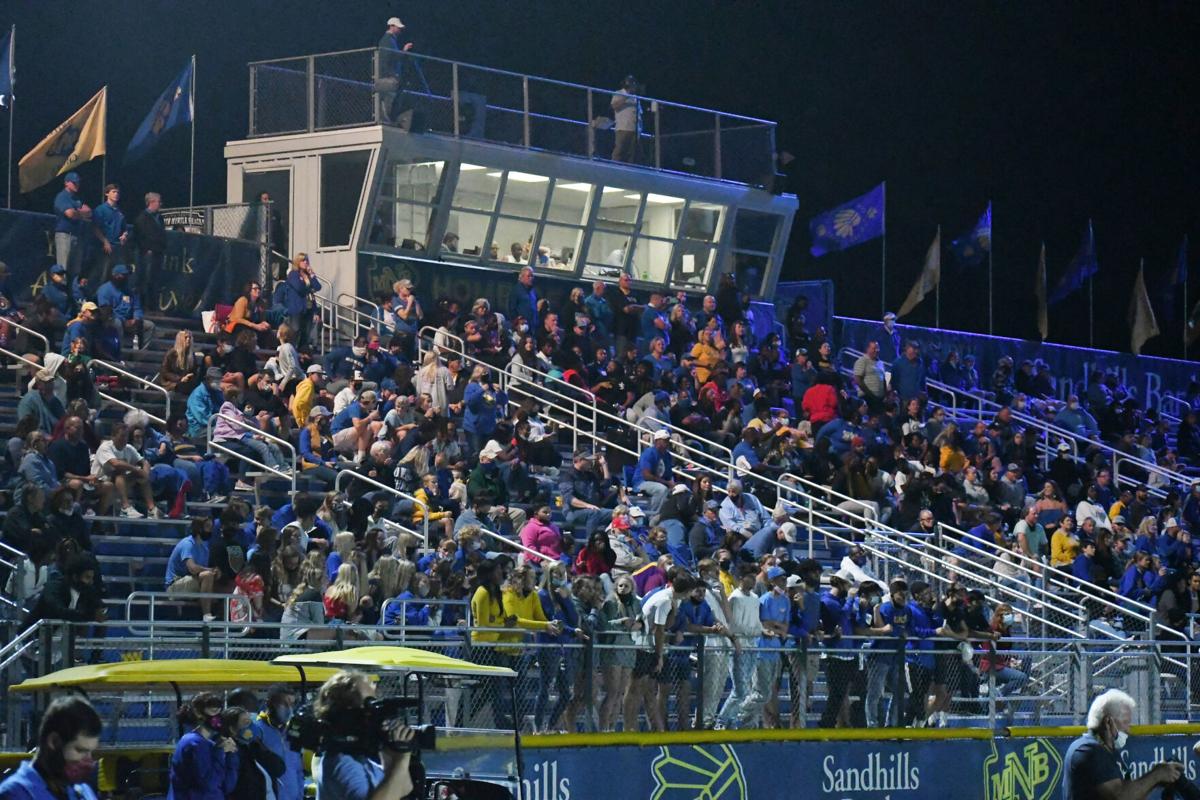 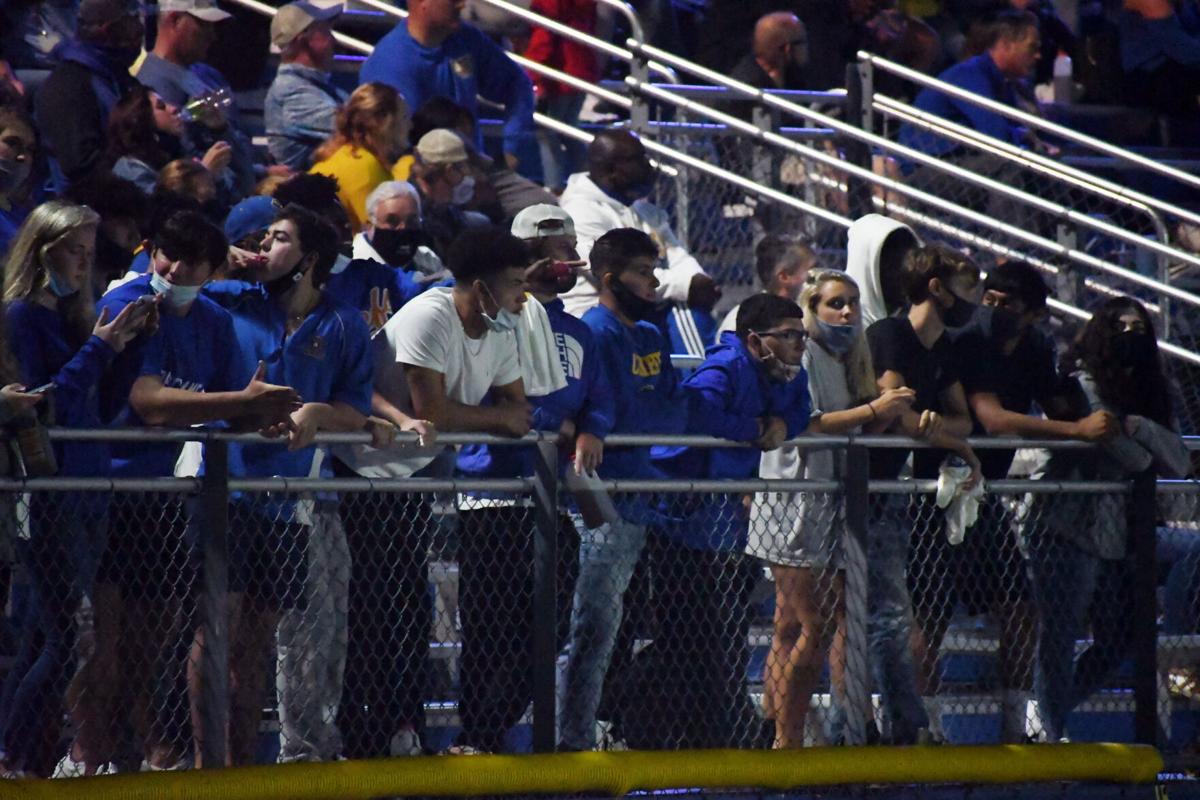 Students hover over the field at Friday night's game between North Myrtle Beach and Myrtle Beach. 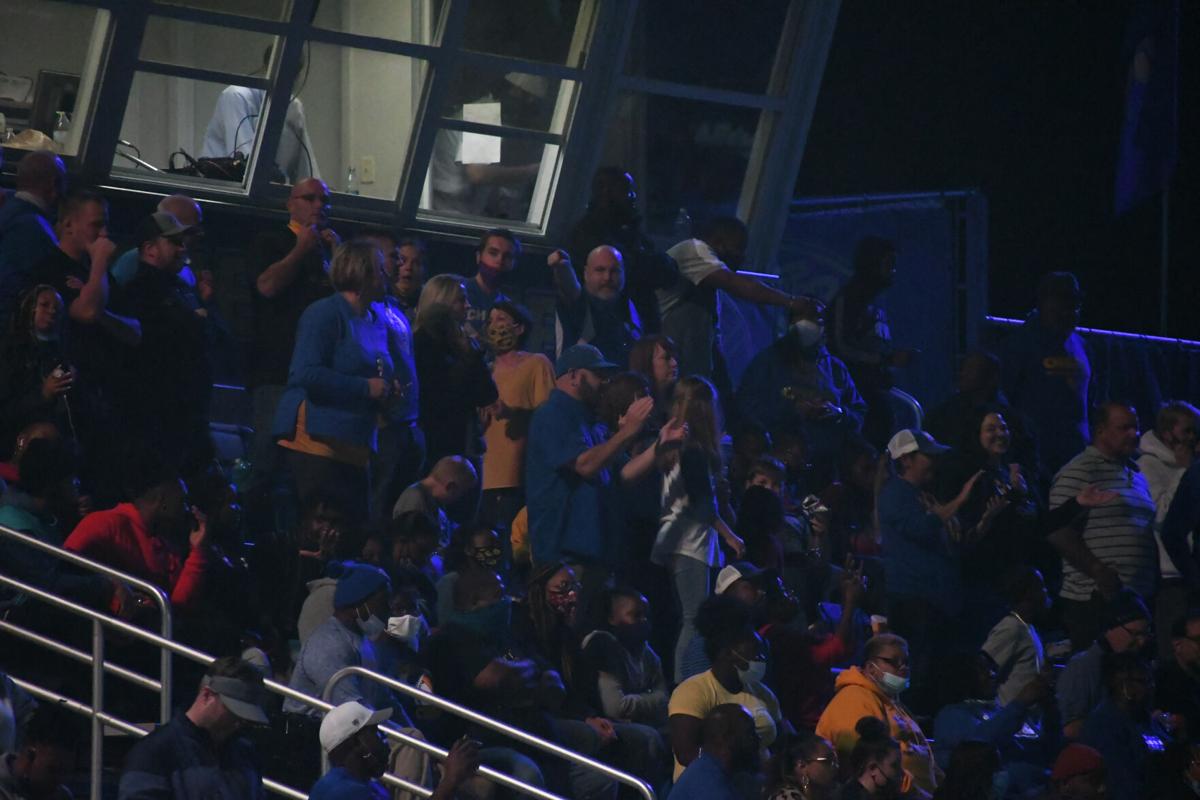 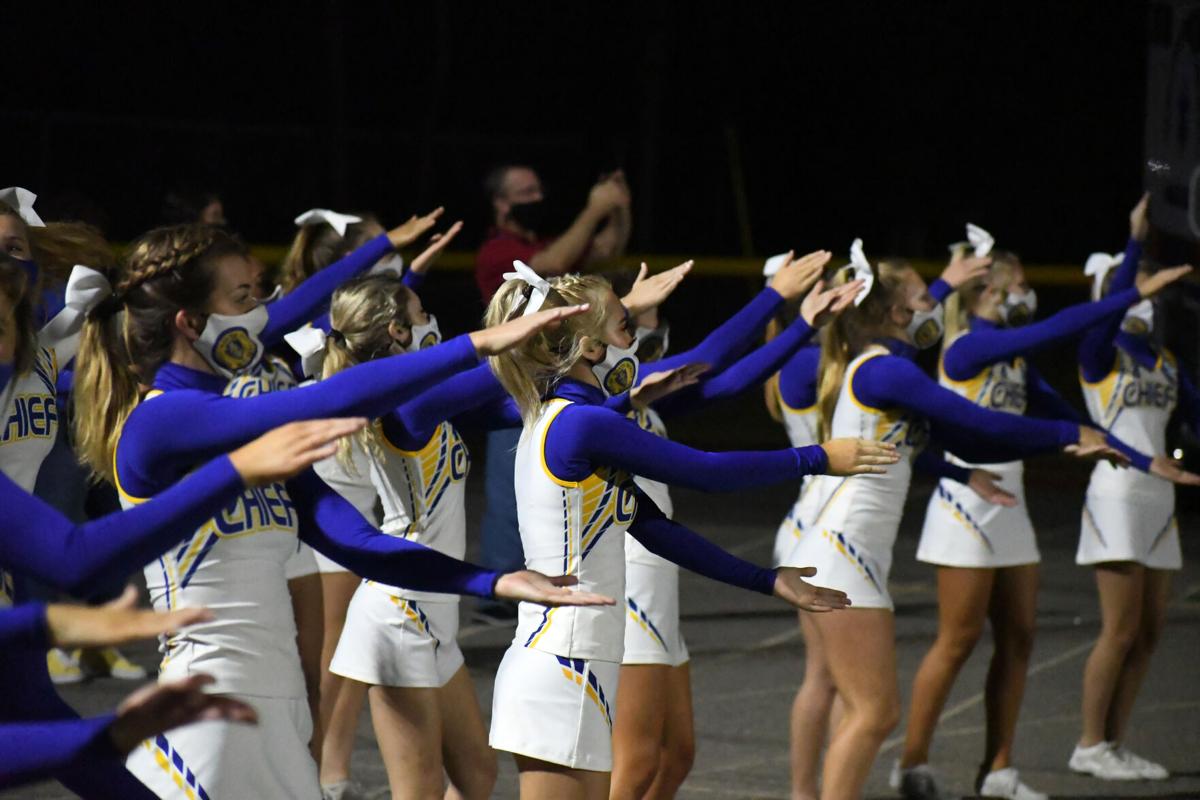 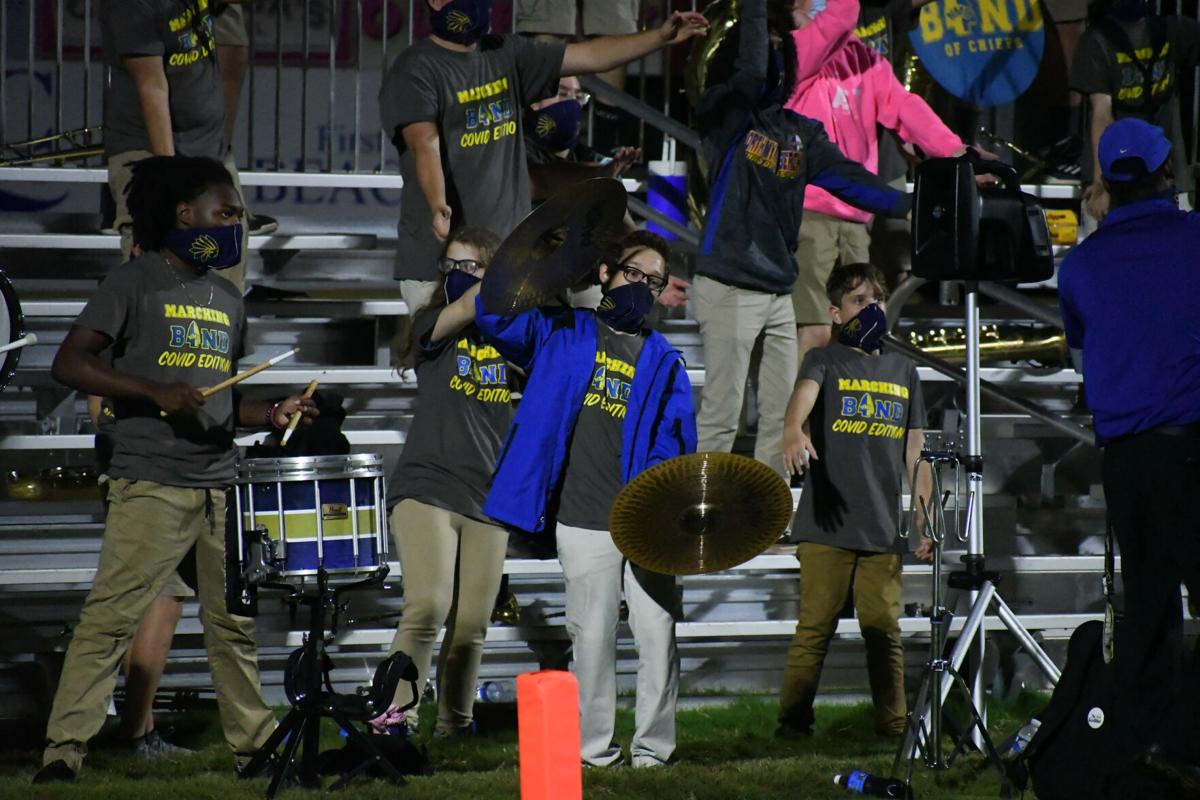 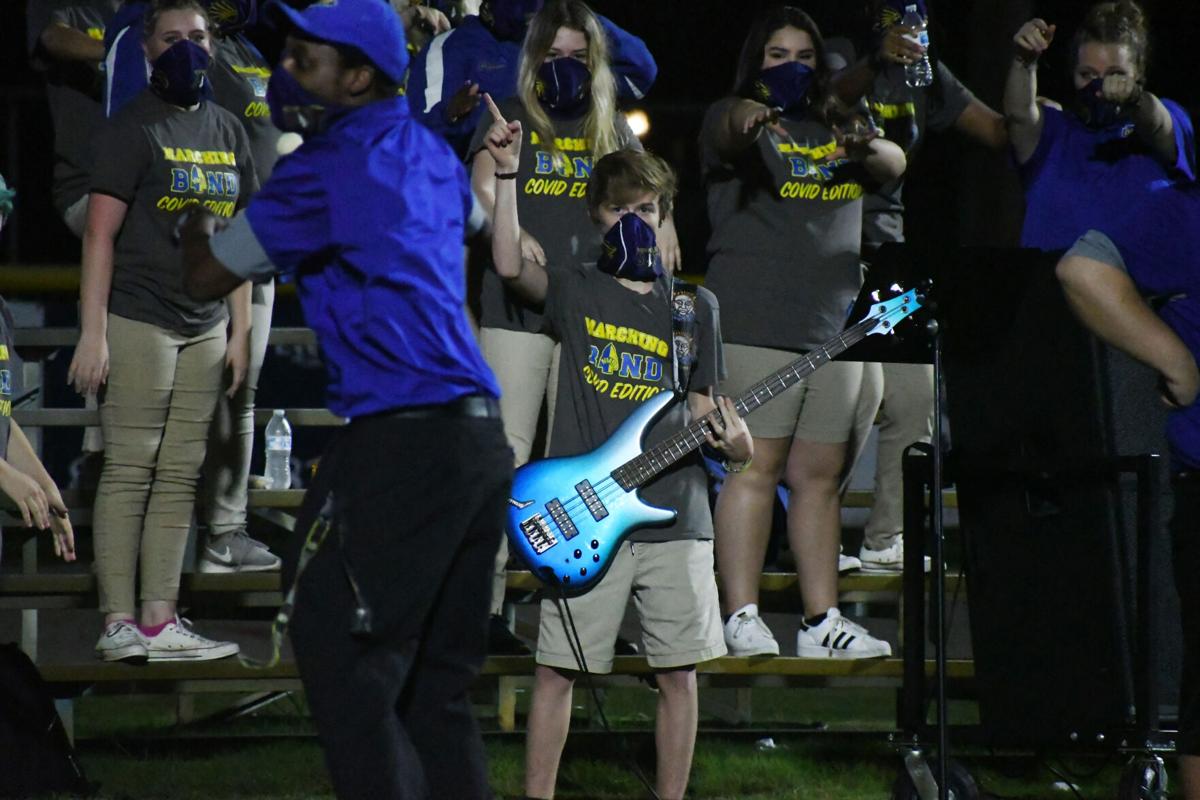 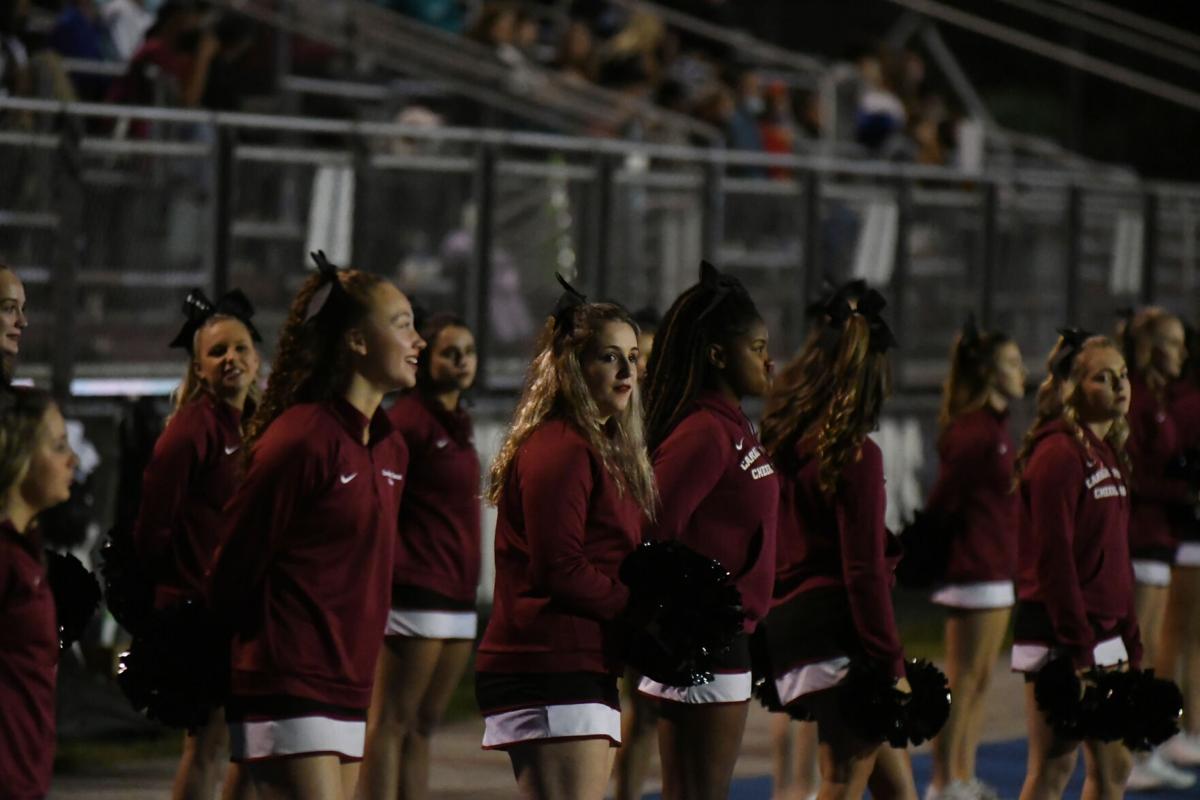 Carolina Forest cheerleaders continued to perform without masks during the school's football game against Beaufort. 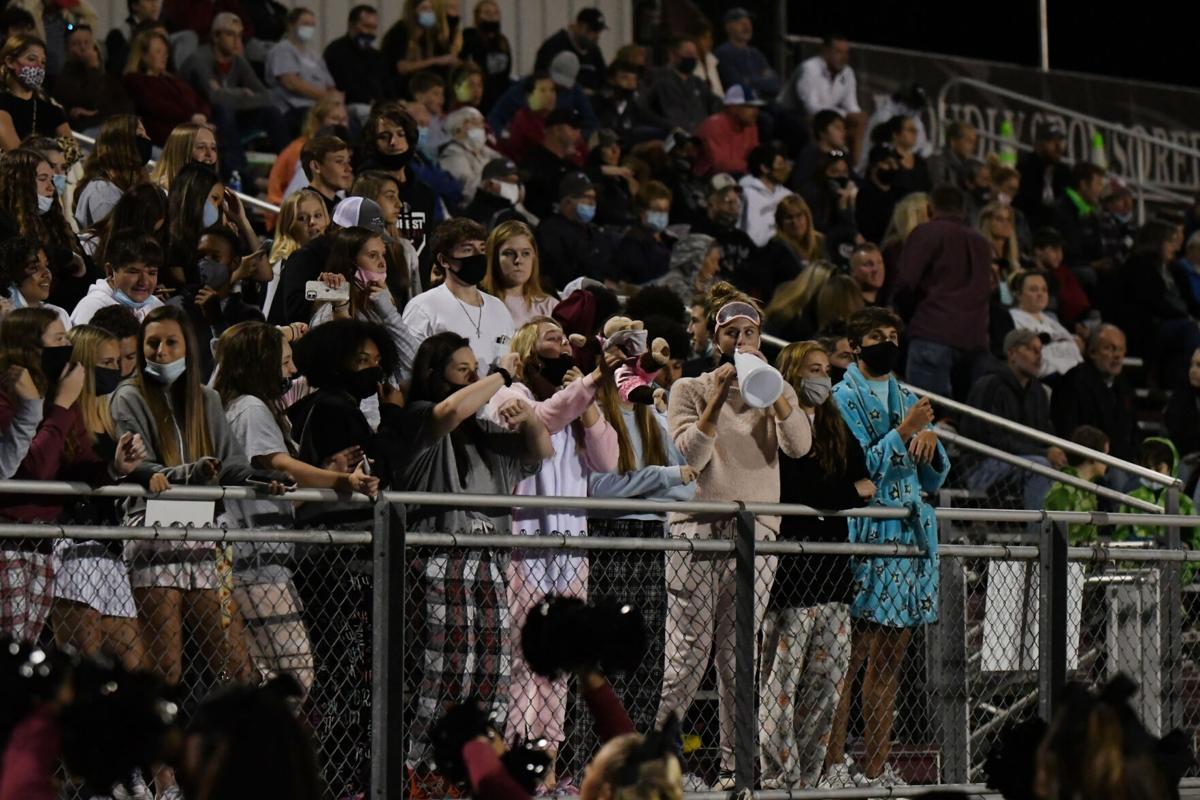 The Carolina Forest student section during the school's football game against Beaufort. 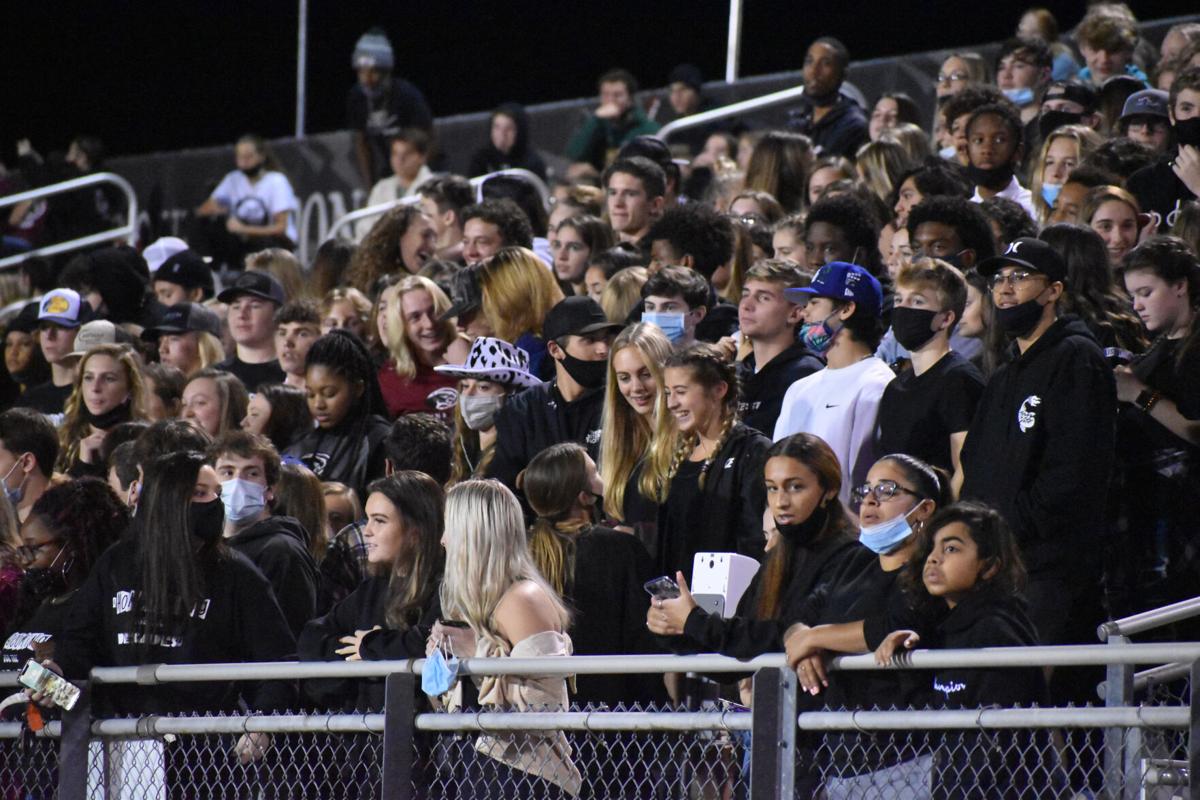 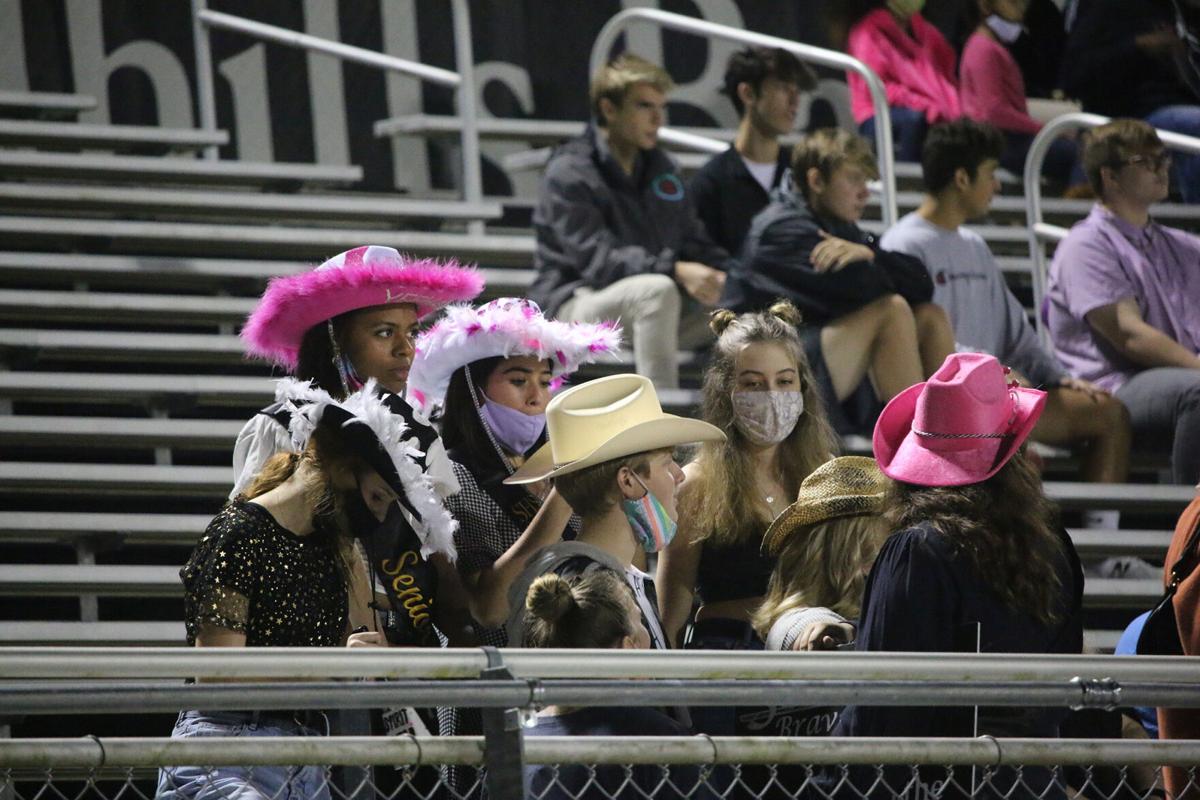 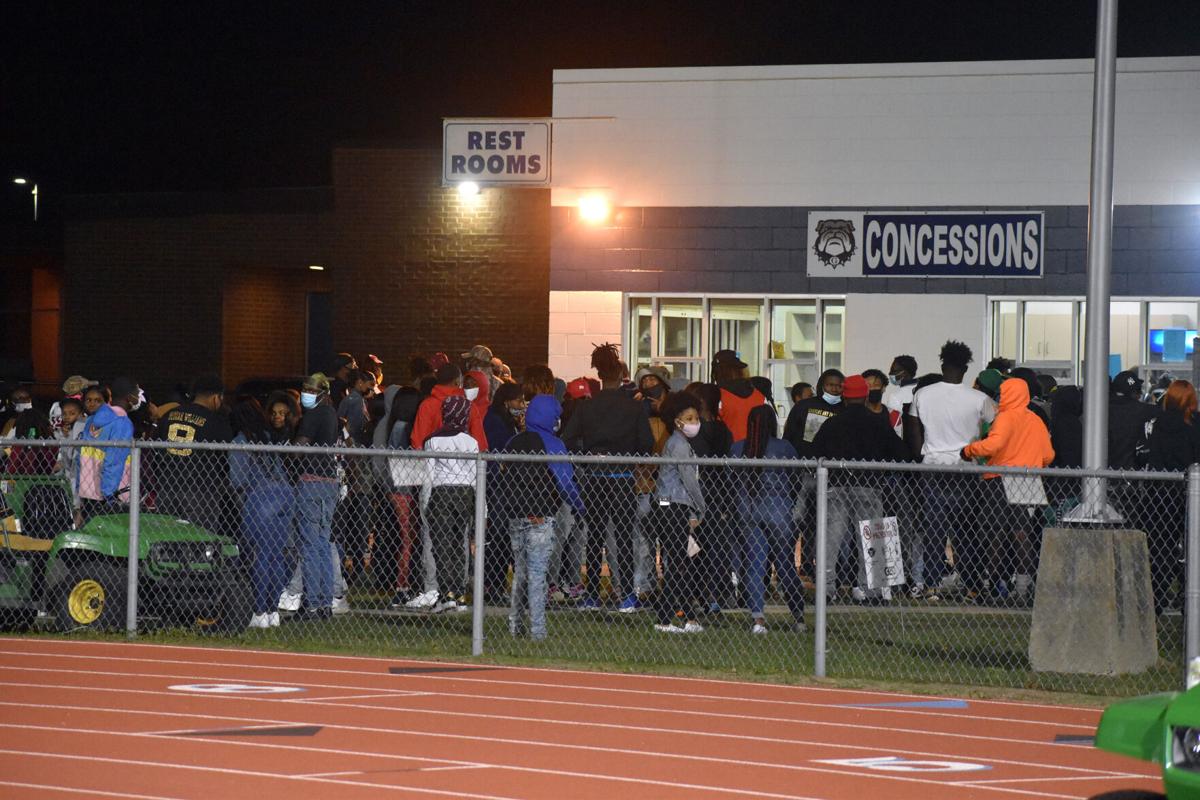 The line for the concessions stands during the Georgetown vs. Carvers Bay game on Oct. 30, 2020.

Students hover over the field at Friday night's game between North Myrtle Beach and Myrtle Beach.

Carolina Forest cheerleaders continued to perform without masks during the school's football game against Beaufort.

NORTH MYRTLE BEACH — This wasn’t your typical rowdy showdown between rivals for a regional title.

Then again, pretty much nothing about 2020 has been straightforward.

When North Myrtle Beach and Myrtle Beach high schools face off, you should be able to hear the roars from Barefoot Landing.

But, on Friday night, the game was relatively muted, and that had nothing to do with the thrashing that the Chiefs handed the visiting Seahawks.

It was mostly because the fanfare surrounding the game was light — as North Myrtle Beach limited the amount of tickets sold for the showdown at The Hank, focusing on providing a safe environment during a global health pandemic.

Just two weeks ago, North Myrtle Beach hosted West Florence amid many violations of either rules or recommendations from the South Carolina High School League.

Many of those observed miscues were fixed on this Friday night.

The coaches? Wearing masks at all times, and keeping their teams in check when emotions ran high at various points in the game.

The cheerleaders? Also masked up and even used their arms multiple times to make sure they stayed socially distant when they moved out of position from behind the home sideline. They tossed out footballs each time the Chiefs scored, but avoided T-shirt tosses.

The referees? Masked up across the board.

The band? Both sides played their hearts out, but did so safely.

The on-the-field scene was a comfortable one, with those maneuvering around respectful of one another.

However, just feet above the field, students and adults alike continued to showcase little regard for the SCHSL’s written guidelines put forth prior to the high school football season — despite pleas read over the loudspeaker by the stadium announcer as early as 30 minutes before the game and reiterated throughout the contest.

The students hung on the guardrail along the right side of the massive home bleachers at The Hank, yelling down to friends with nary a mask, with most either having one wrapped around their neck or tucked under their respective chins.

Their adult counterparts that packed the middle portion of the bleachers didn’t set the example, clustering together, with at least 50 percent of people not utilizing masks — with some not even attempting to display a face covering of any sort.

Postgame, a coach lamented it had been a long couple of weeks for the school’s administrators since our previous edition of Friday Night Lights Unmasked published, indicating it created logistical and optical issues for the school.

On Friday, the administration controlled what it could, as the SCHSL only pushes recommendations instead of hard-and-fast rules, leaving the schools in a tough spot to try and govern adults.

Maybe at next week’s playoff game, the adults in the room will simply follow the model being set by the teens and coaches on the field.

The Carolina Forest football team may have looked good during its 42-6 victory over Wilson Thursday night, but the school continued to have issues with COVID-19 protocols.

What stood out the most was the student section, where students were packed in like sardines with few masks being worn. The home stands featured about half its patrons not wearing masks at any given point during the game, and fans could have socially distanced far better.

Many of the Panthers cheerleaders could be seen not wearing masks throughout the game, especially when they were actively cheering.

There were virtually no problems with the away side, as Wilson did not have too many fans make the trip to the game.

Coaches on both sides more masks throughout the game for the most part.

There were signs posted throughout the venue asking fans to socially distance and wear masks. There were approximately 1,000 fans in attendance.

About half of the fans wore masks on the Socastee High home side as the Braves took on the Georgetown on Friday night.

With less than 50 people on the visiting side, most folks sat socially distant, though many did not wear face masks. The same could not be said for the Socastee home side, as people sat close, some with no masks on.

Socastee High coaches wore masks, but feet away cheerleaders and the Bravettes wore no masks as they cheered and danced on the sidelines.

As of Friday, Socastee High had no active student or staff cases of COVID-19, but two staff members were in quarantine. The school has had a total of seven historic cases.

The stadium stands weren't as crowded as past homecomings at Myrtle Beach High School on Friday night as the Seahawks took on South Florence High.

Though the stands were less crowded, fans and students sat close, some wearing no masks or pulling their masks below their chins. Away fans — socially distant because only a few dozen attended — wore masks, but the South Florence cheer team cheered wore no masks.

There was no social distancing in the smaller-than-normal student section on the home side, though some wore masks as they stood in one big cluster. Myrtle Beach fans did not practice social distancing and there was nobody patrolling the stands to ask people to put on face masks.

Myrtle Beach cheerleaders wore face masks, including when it was time to do stunts.

Since the outset of the season, Carolina Forest has shown that it will allow its students to cheer in tight clusters, while also allowing fans to ignore social distancing, with some disregarding utilizing masks.

On this Friday night, it was a dramatic departure from that picture.

Both sidelines featured few fans, while roughly 80 percent wore masks and there were few cluster of fans.

The student section was still pushing the limits, although far better than their home opener just weeks earlier.

The concessions were lightly used, although workers on the inside didn’t have their masks over their noses, with some even under their chin.

Georgetown High School did have under the allotted 1,232 fans at the game with roughly 1,000 in attendance, but the crowd left plenty to be desired when it comes to social distancing, especially on the away side. People were gathered together in pockets with more than "immediate family-sized groups.”

Roughly 20 percent of fans could be seen with masks down during the game at some point.

One of the most alarming things of the night was the mass gathering at the concession stand during halftime, with a large group gathering and not adhering to social distancing protocols.

People were also lined up along the railing on the away side despite the PA announcer repeatedly telling people to find a seat. Cheerleaders could also be seen periodically not wearing masks.

Signs were posted throughout the venue telling fans to wear masks and adhere to social distancing.