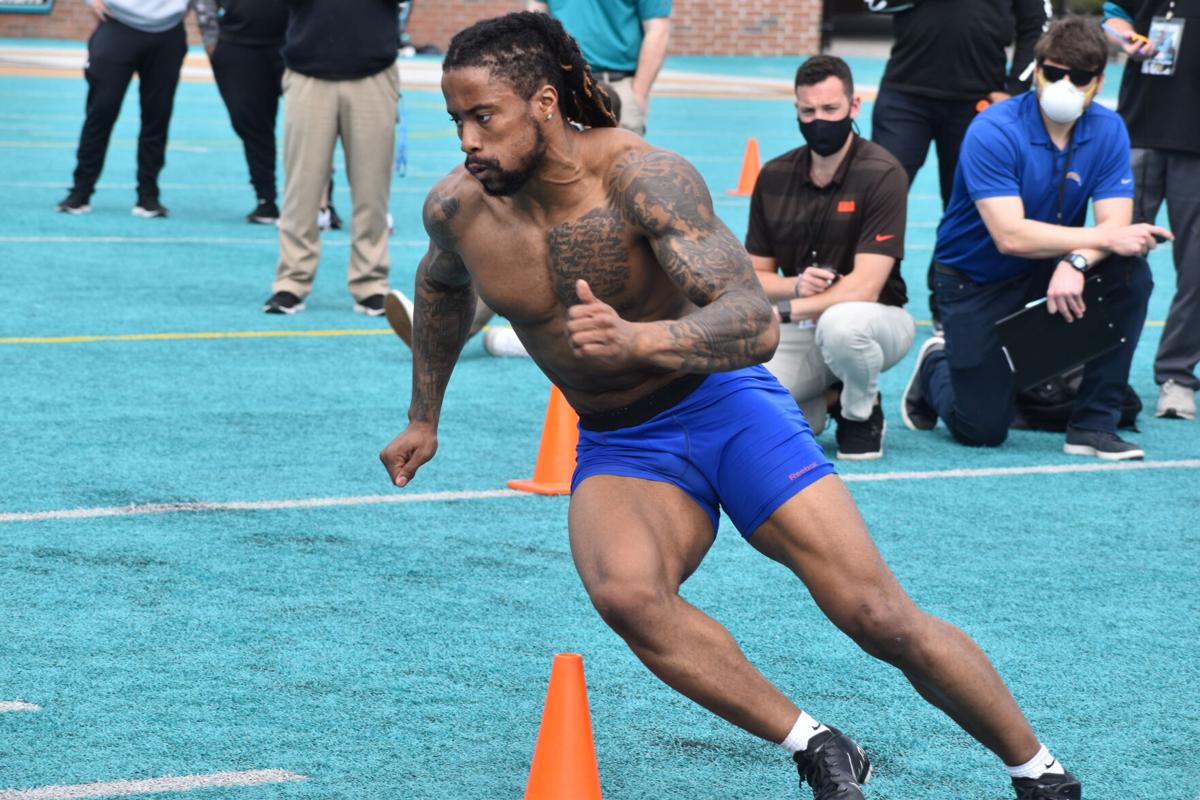 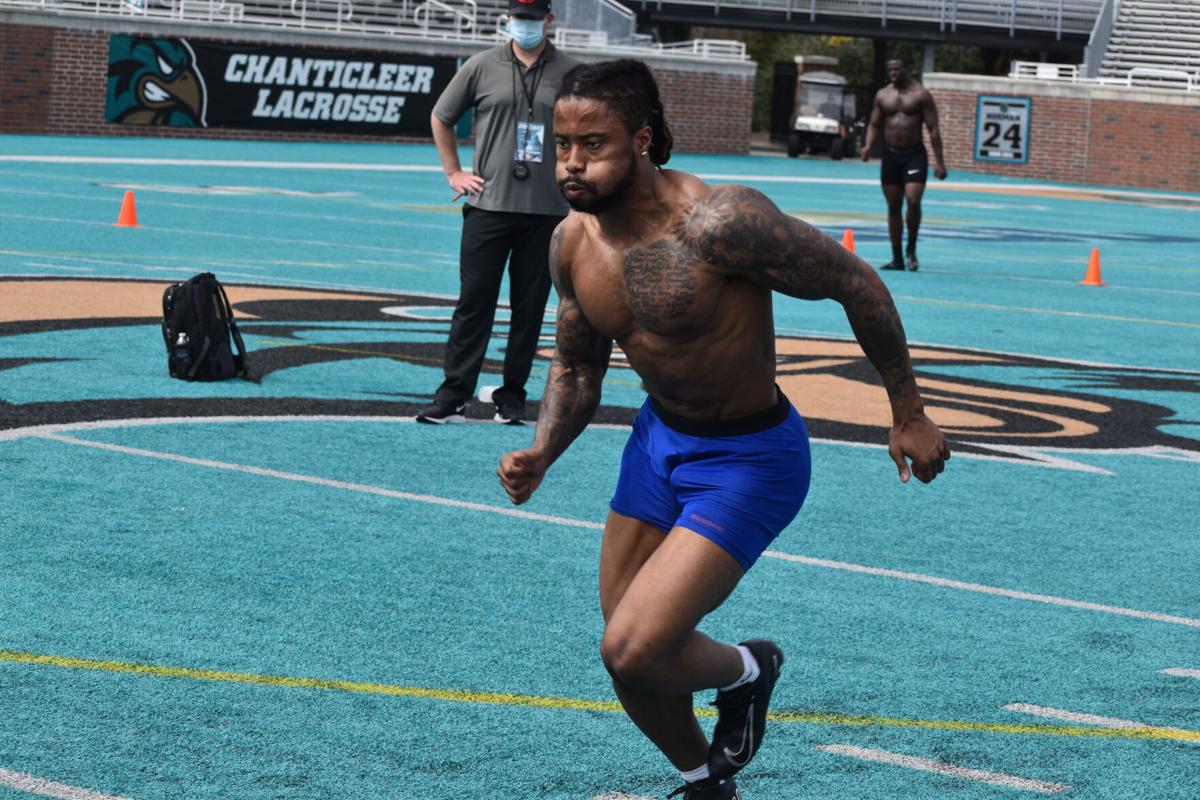 Former Coastal Carolina defensive back Mallory Claybourne participates in a drill during the Chants' Pro Day at Brooks Stadium on March 23, 2021. Danny Kelly/Staff 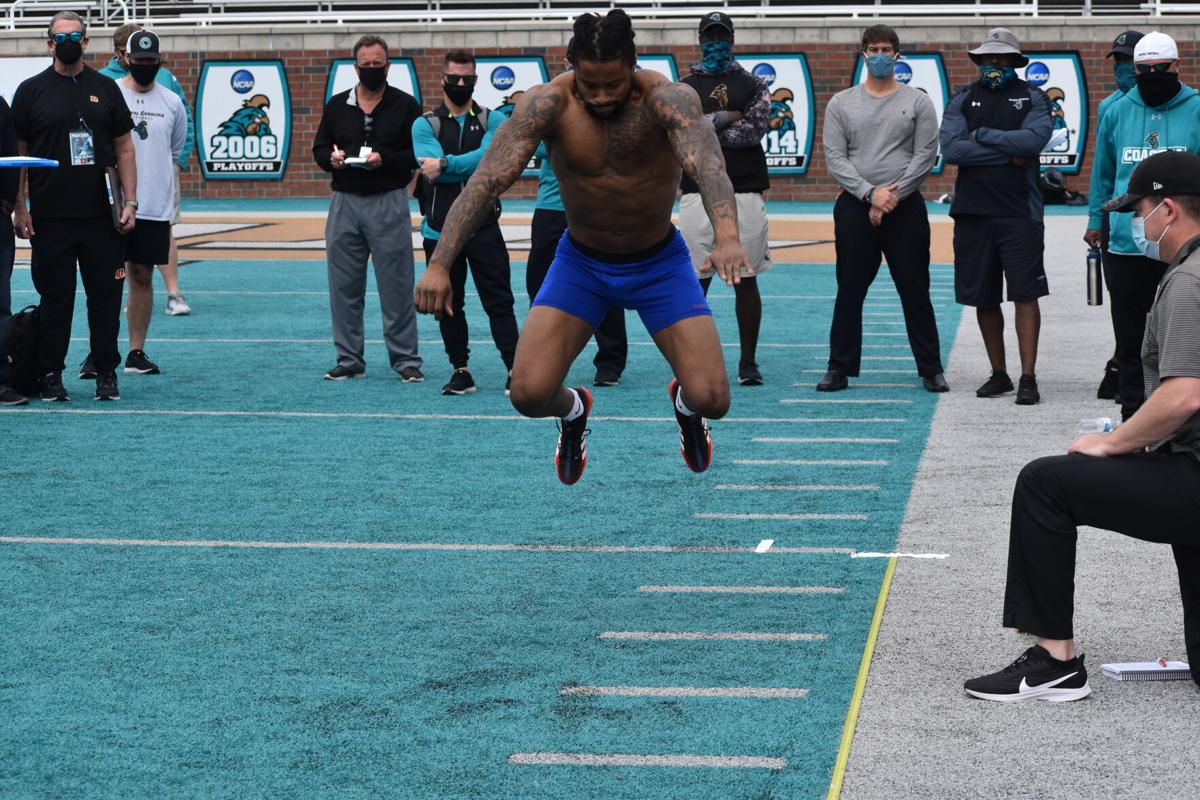 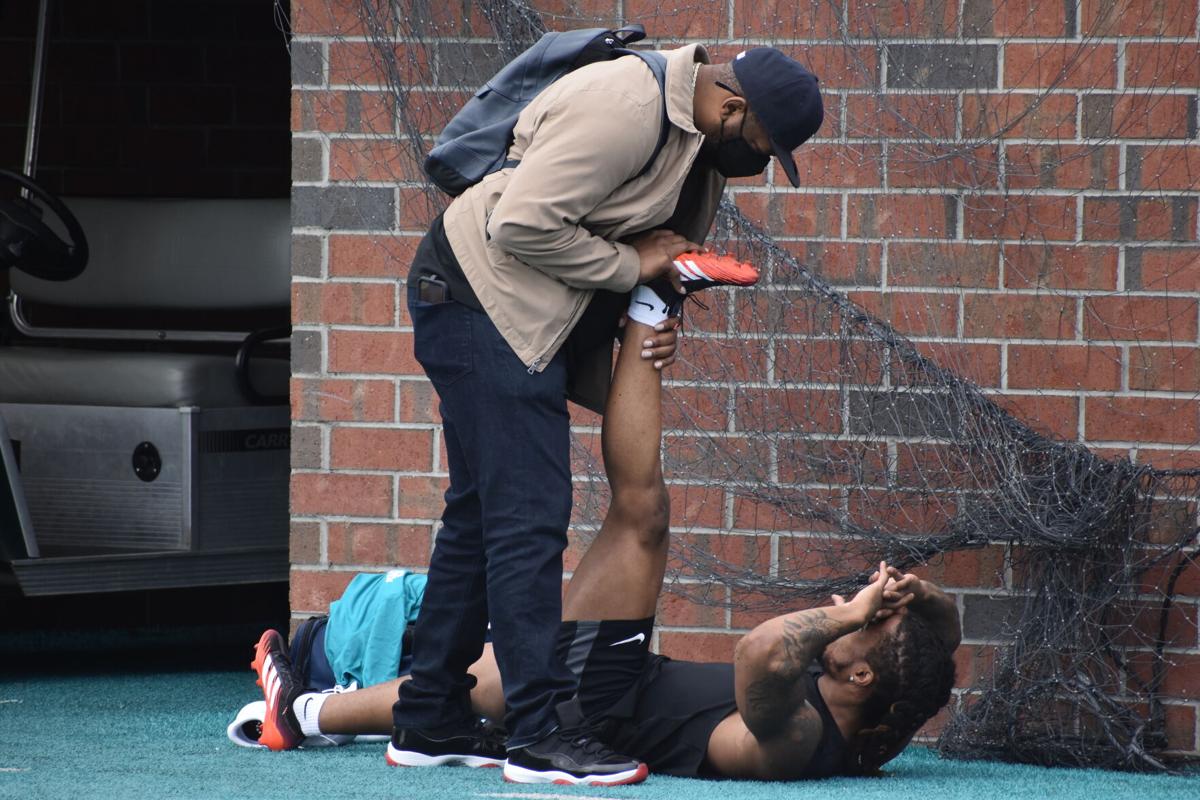 Former Coastal Carolina defensive back Mallory Claybourne gets help stretching from a trainer during the Chants' Pro Day at Brooks Stadium on March 23, 2021. Danny Kelly/Staff 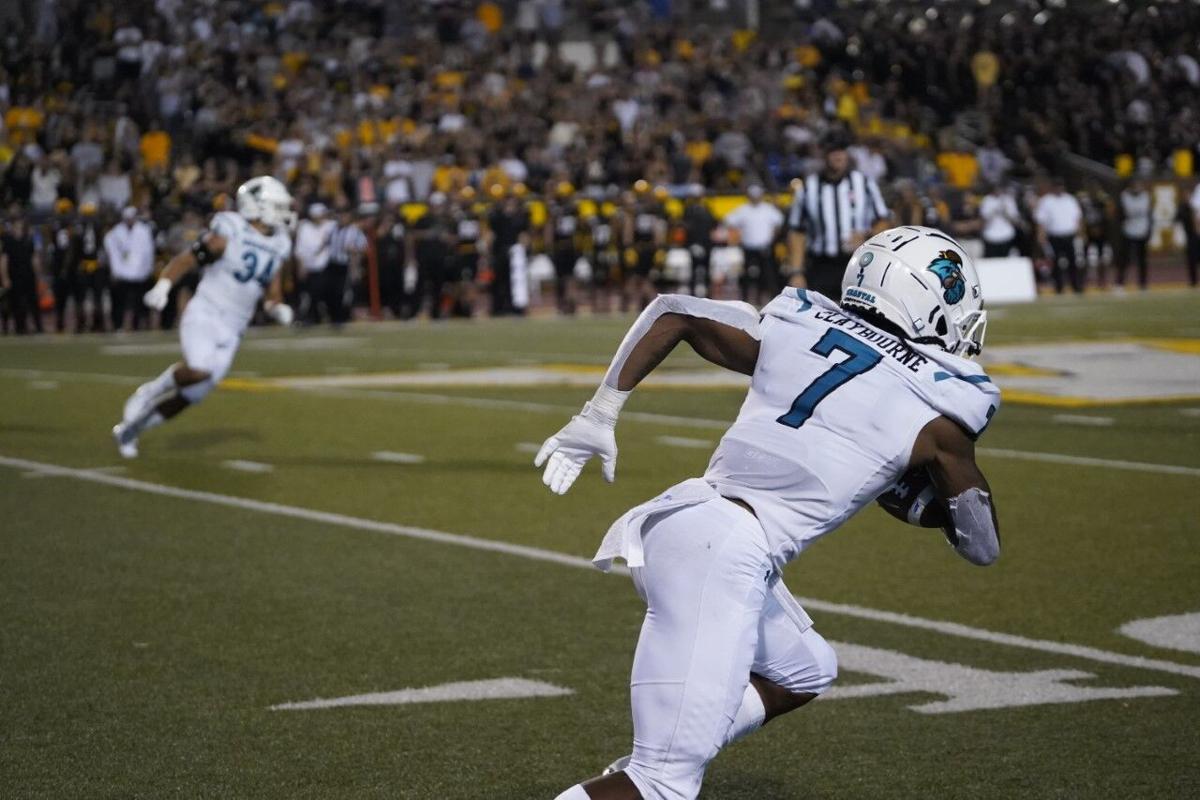 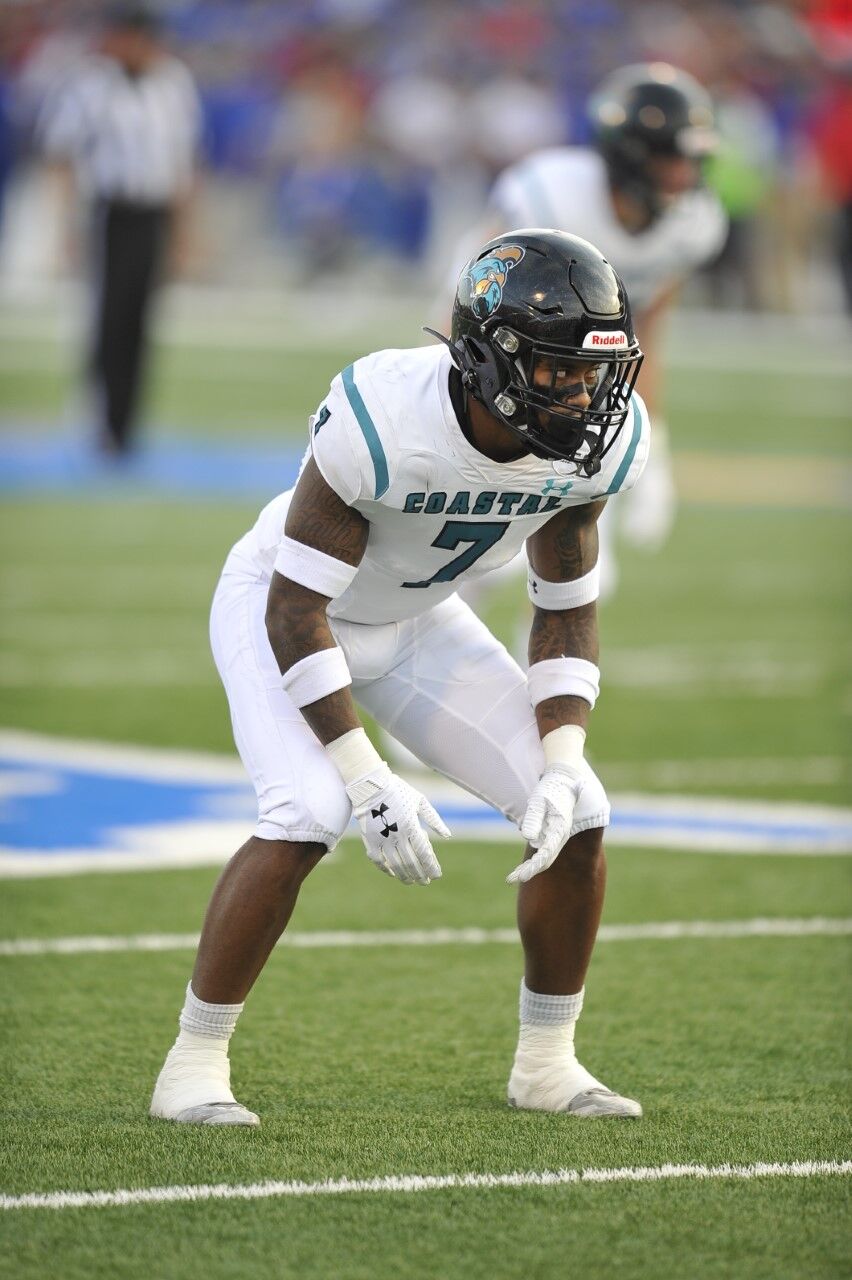 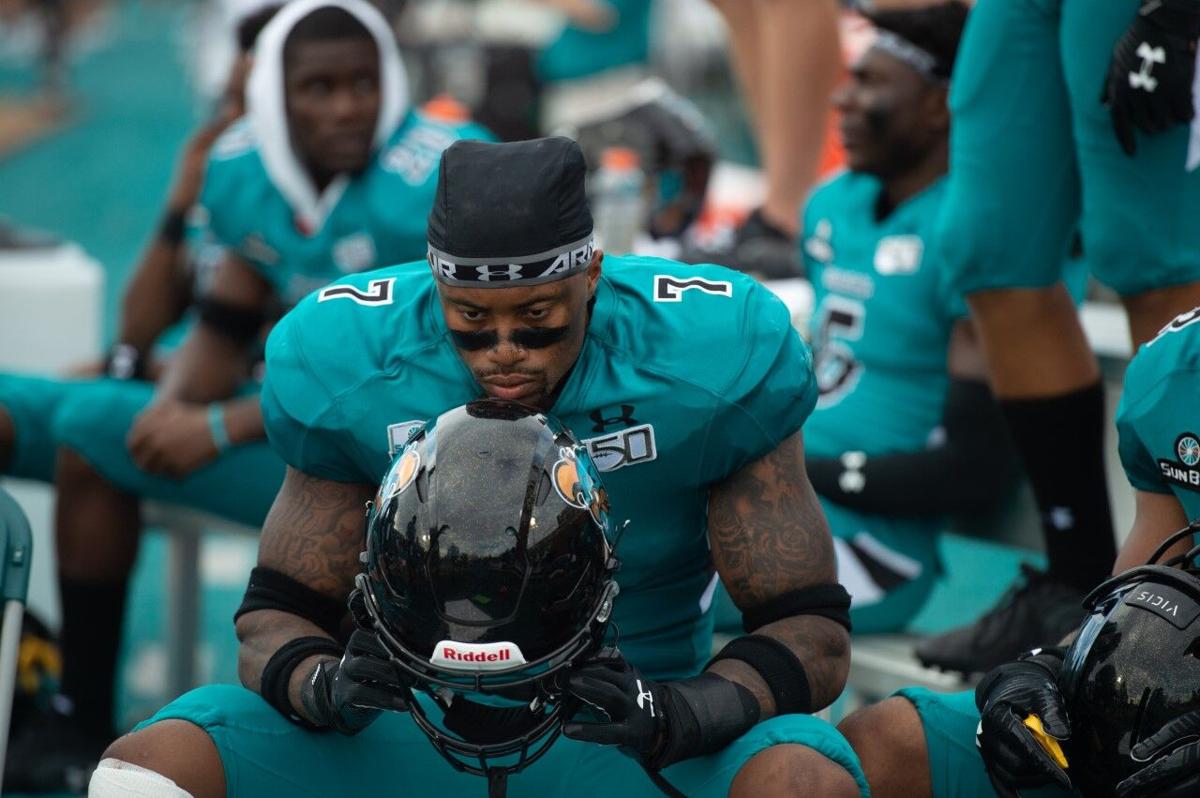 Former Coastal Carolina defensive back Mallory Claybourne participates in a drill during the Chants' Pro Day at Brooks Stadium on March 23, 2021. Danny Kelly/Staff

Former Coastal Carolina defensive back Mallory Claybourne gets help stretching from a trainer during the Chants' Pro Day at Brooks Stadium on March 23, 2021. Danny Kelly/Staff

CONWAY — Mallory Claybourne knows what the inside of a housing shelter looks, smells and feels like — he fought the darkness of utilities being cut off constantly alongside his single mother and six brothers.

Claybourne is the only one of the seven boys that hasn’t been incarcerated.

But he has felt the impacts of that life, once being hit in the face with a gun by a SWAT officer during a raid because he was mistaken for one of his brothers.

Claybourne grew up without a father figure — he has never met his.

His mother did her best, but the former Coastal Carolina football player experienced eviction from a housing project in his native Pittsburgh.

And football became his muse, a love affair that originally started with his oldest brother, Timothy Smith, who would play with Claybourne from time to time.

But it wasn’t an easy outlet to maintain, sometimes having to take a bus 15 miles across town — by himself — to play football at the age of 8.

At 17, CCU star Melissa Jefferson made a life-altering decision. She saved her father.

“I would try to gather up as much change as I could — just to get on (public) transit just to go across town,” Claybourne said.

When Claybourne got to high school, he met Melvin Kirby.

Kirby would allow Claybourne to play his 7-on-7 team without paying because he could not afford it.

A selfless act with a long-ranging impact — it allowed Claybourne to perfect his craft on the field without having to worry about what it would take off the field to afford it.

“It wasn’t about the money, he just wanted to help me out,” said Claybourne.

“The way I grew up, I didn’t really see a lot of people like that, especially from a point of seeing that somebody really wants it, and just giving them the opportunity.”

Claybourne was determined to not let it go to waste, heading to Lackawanna College in Scranton, Penn., as a wide receiver, where he witnessed about 75 wide receivers try out for the team in total in his two years there, with coaches choosing to keep only six on the team each season.

It was an “NFL mentality,” where only the best of the best survived.

His muse was worth the tight living quarters, as Claybourne still didn’t have much to his name, other than the jersey on his back.

“They would bring guys in, and if you didn’t play up to the standards of what they met, and you didn’t work hard and you didn’t take care of your academics, you were gone,” Claybourne said.

He kept his nose to the grindstone, so to speak, and that attracted CCU.

In 2017, Dave Pautenade recruited Claybourne to help the receiving corps for the school’s first Division 1 season.

Claybourne was all in.

Months later, Pautenade left the program, and Claybourne in limbo.

Instead of a receiver, Claybourne was recast as an “athlete” with the Chants, with the squad needing help at defensive back.

The coaching carousel would continue for Claybourne while with CCU, experiencing three different defensive coordinators and defensive backs coaches.

Throw in an interim change atop the Chants program at the beginning of the 2017 season — Jamey Chadwell taking over for Joe Moglia due to health — and Claybourne knew that the only thing he could do was adapt and work on himself.

“For him to be able to adapt and to adjust to the different defensive coordinators and different DB styles, I think that says a lot,” Foster said. “I think for the most part that he did well for what we were asking him to do.”

The injury bug would mark Claybourne’s time at CCU, taking a medical redshirt his first season due to an injury in the third game of the season, while also missing the latter half of his senior year due to a torn ACL in a game against Troy.

He’d still finish fifth on the team in tackles with 45.

The injury didn’t stop him from earning his degree in Interdisciplinary Studies in August 2019, allowing him to return to the Pittsburgh area where Dr. Freddie Fu successfully repaired his injured knee.

Being back home, some similar issues crept up, becoming briefly homeless, having to stay in an Airbnb for nearly 90 days before finding a job so he could rent an apartment.

He’d find work doing security for the Department of Transportation, a night club, a museum and a hospital.

It paid the bills.

Claybourne said his job at the hospital was the most difficult, working directly with patients that had to be transported from one facility to another, including those that were being transferred to mental hospitals.

“We actually really had to get hands-on,” Claybourne said. “Other people try to hurt doctors, nurses, security, and not only those people, but people who are on drugs, you have to restrain them.”

His eyes were still on his muse, now in the form of the NFL.

Claybourne’s rehab from his injury was mostly on him, as he did not have the same resources in Pittsburgh as he did at CCU.

He found a gym where he could train, Hard Work Sports and Performance, owned by one of his brother’s friends, Darnell Tate.

However, the gym really only offered strength training, so doing football-related drills fell on Claybourne.

When Claybourne heard that Coastal Carolina was having a Pro Day on March 23, he jumped at the opportunity.

The event was mainly for seniors Tarron Jackson and CJ Marable, but Claybourne decided to participate, as well as former CCU defensive tackle Sterling Johnson.

Claybourne said he couldn’t sleep the night before, and he flew down from Pittsburgh that same day to show off his skills to NFL scouts representing 15 different teams.

“Well I think it showed (No.) 1, his work ethic, his desire to want to try to come back,” Chadwell said of Claybourne participating in Pro Day.

“A lot of people I think would’ve just given up, but he kept working and put himself in position and a scout invited him there and I think he did well.”

Claybourne said he had a saying he kept referring to when he was trying to get his body where it needed to be to impress NFL scouts.

“A weak mind will never prevail,” he said.

“Facing adversity and never quitting, even when I had a lot of doubters and people weren’t in my corner and a lot of people forgot about me, I just never thought to give up or to give in even a little bit.”