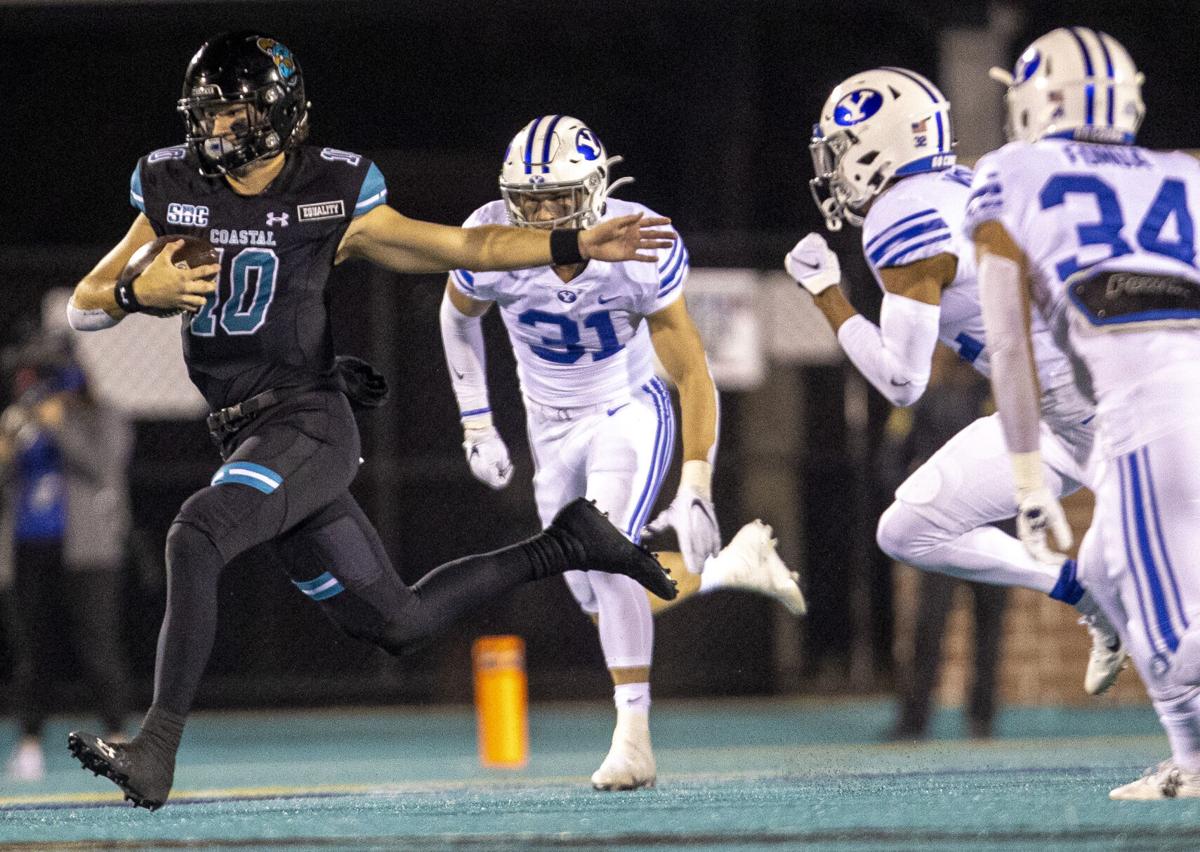 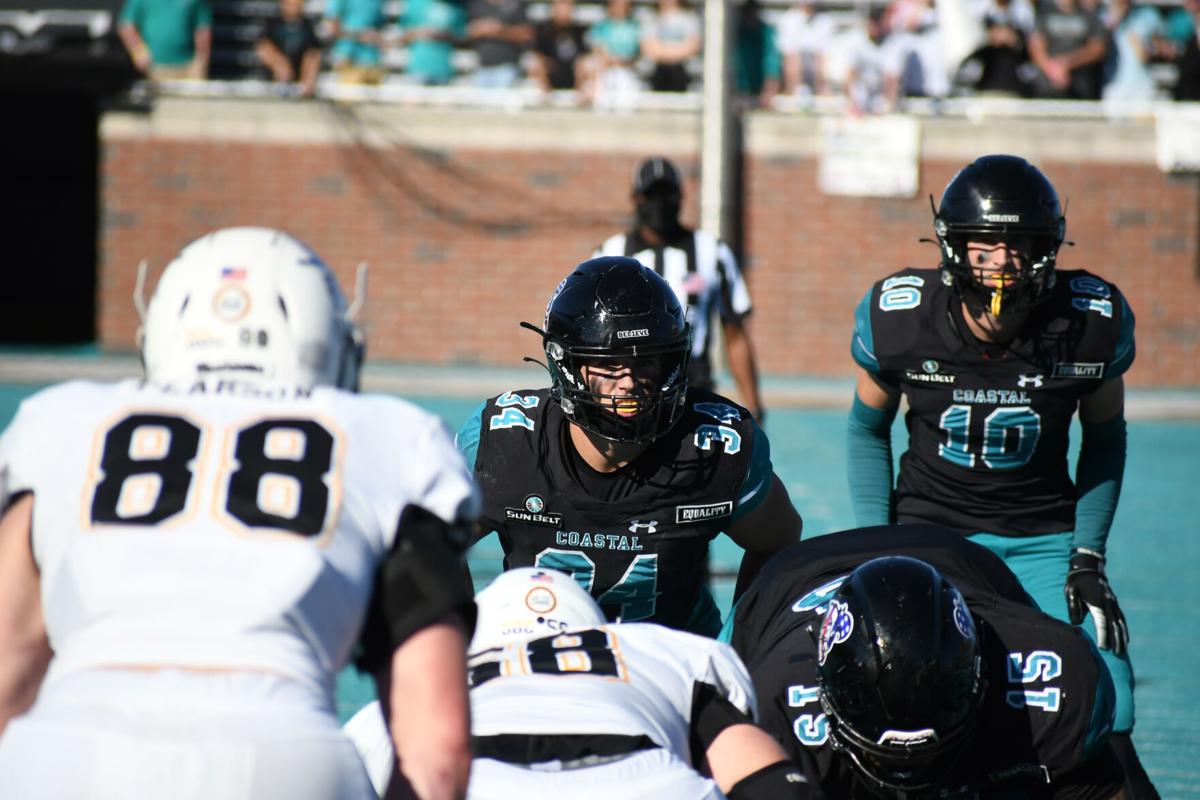 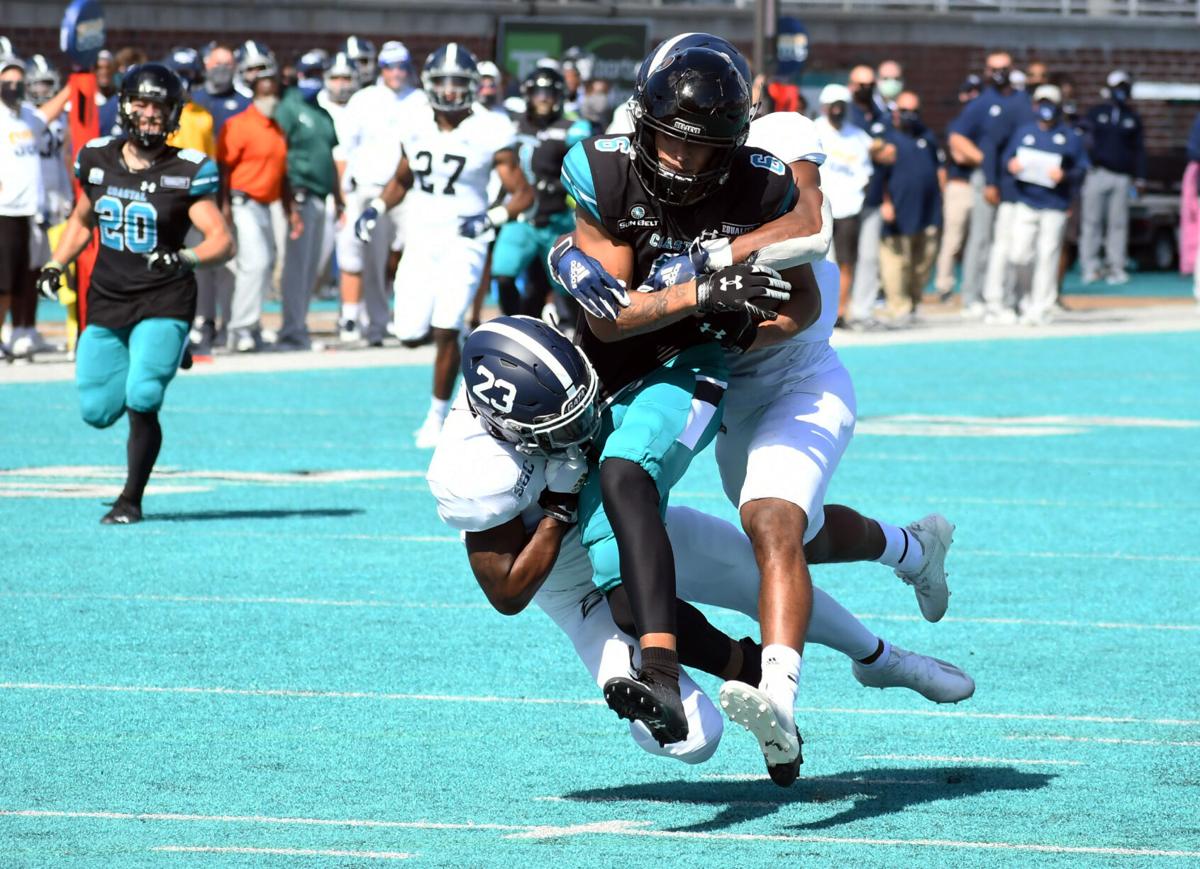 Coastal Carolina's Jaivon Heiligh hauls in a long pass in the second quarter against Georgia Southern. 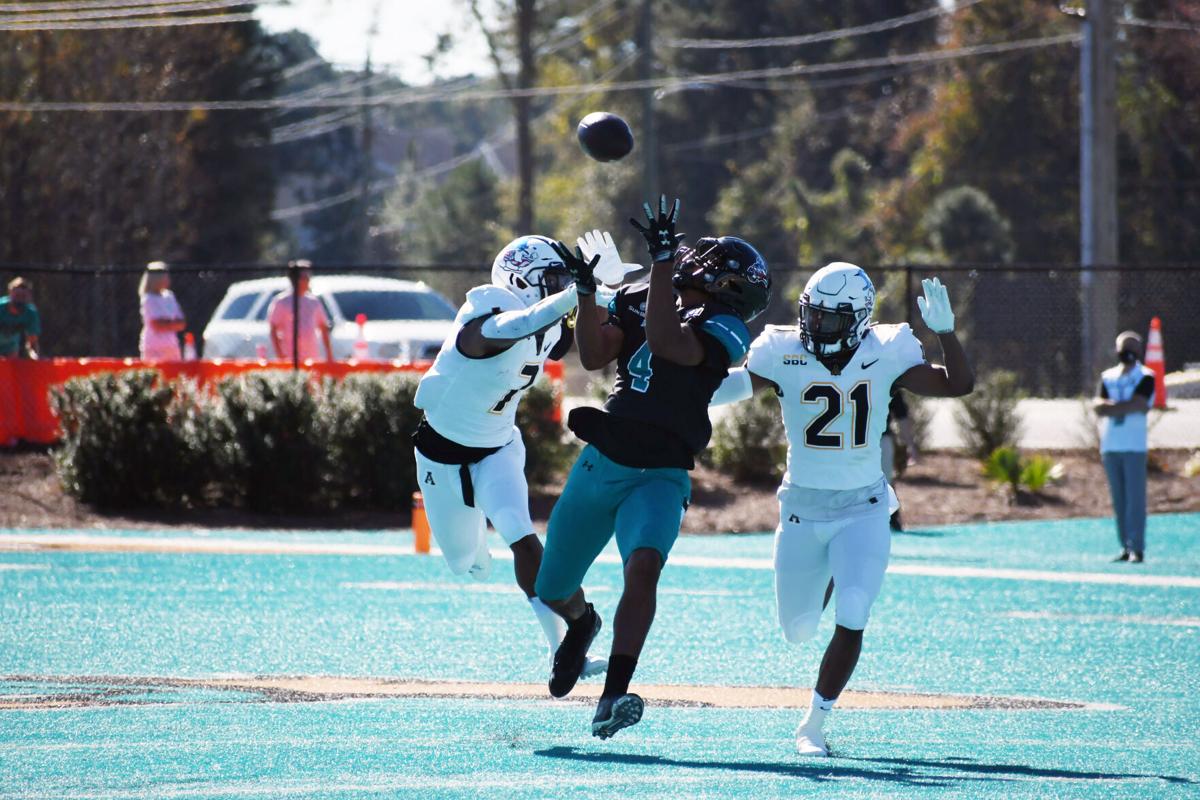 Coastal Carolina's Jaivon Heiligh hauls in a long pass in the second quarter against Georgia Southern.

CONWAY – Every team in college football has a rough idea of who they’ll be playing in conference every season.

They will always play division opponents and play a mix of opponents from the division across the aisle within conference, but what fluctuates constantly is this: non-conference schedules.

A member of the Sun Belt, Coastal Carolina football will always play opponents in the conference’s East Division and a mix of teams from the West, but what may be of interest to Teal Nation is who the Chants will play out of conference over the next decade.

The formula for setting up those schedules isn't an exact science.

“There really is no tried-and-true system," CCU athletic director Matt Hogue said. “There are some national services that you can subscribe to that can kind of help you navigate who’s open and when. Football scheduling is sort of unique and always has been unique in that games are scheduled so many years out in the future. It can be eight, nine, even 10 years or more that you might have a game scheduled.”

In 2021, the Chants are set to play at home against The Citadel, UMass and Kansas, and will travel to play Buffalo in the first year of a home-and-home with the Bulls.

Chants head coach Jamey Chadwell has a history with The Citadel from when they were a crosstown rival when Chadwell was the head man at Charleston Southern.

“The thing with them is they have a history of knocking off bigger schools, G5 (Group of 5) and Power 5,” Chadwell said. “So I’m excited about the opportunity of playing them and I know the same with them. Their program is really good and consistent and I think it’s good for us, too, to play somebody that we’ve played in FCS that our fans know and remember. And especially being in-state, there was a history of having good games.”

That game will take place on Sept. 4 at Brooks Stadium.

The Chants will then host Kansas the following week, making the Jayhawks the first-ever Power 5 team to come into Brooks Stadium. The Chants beat Kansas each of the last two years in Lawrence, Kan.

“I think that’s a big deal, definitely,” Chadwell said. “Anytime you can get a Power 5 team to come to your place, I think it speaks volumes. That’s something for your fans to have an opponent that’s unique and new that can come here that’s from one of those conferences … It’ll help continue to build our program and our fan base and the opportunity they’ll have to see people come here and play in Conway.”

“I think the cool thing about Army and the military, the players that choose to go there, they’ve obviously got a higher purpose,” Chadwell said. “They’re serving our country, so for one, I think that’s just a special deal, and then two, to have a chance to go and play up there and the tradition they have and the history of their program and all the greats that have played there. That’ll be a great opportunity for our young team … just to learn the history of football and see some of (that). To me, that’s an exciting deal.”

Hogue said that matchup happened because of personal relationships between the Chants and Black Knights programs.

“Certainly, we have a lot of veterans and a lot of military personnel who are retired here or are maybe even still active duty, so it just seemed like a win-win and a great idea,” Hogue said. “Fortunately, through professional relationships, which a lot of times is what drives scheduling, we were able to something set up with them and I think it’ll be a great series through the four year that we play them.”

In 2023, the Chants will fly across the country to take on UCLA, a matchup Hogue said was created when the Chants joined the FBS in 2017.

“That definitely is an interesting trip going out to the west coast,” Chadwell said. “For me, I think that’s a unique deal just for the majority of our players who have never been to the west coast I’m sure. For them to have a chance to go out there and play a team in the Pac-12 and be in LA and all the different things from that standpoint they see on TV, I think that’s a cool opportunity for them.”

A non-conference matchup that many CCU fans will be excited about is the one the Chants will have with Liberty over the next decade. The Chants will play the Flames five times from 2023 to 2029, twice at home and three times in Lynchburg, Va.

The Chants and Flames are former Big South rivals, and had a chance to renew that rivalry in the Cure Bowl on Dec. 26, a game Liberty won, 37-34, in overtime.

The Flames lead the all-time series with the Chants, 8-7.

“I think that’s a good opportunity, obviously, to continue to build on that,” Chadwell said. “It’s somebody we obviously know well and our fan base knows well … I expect that rivalry to continue to be a good one … It’s hard when you’re a young team in FBS to develop rivalries. We’re trying to do that in the Sun Belt, and to be able to play somebody that’s been a rivalry over so many years like that I think continues to build one, our program, but two, our fans are excited about knowing somebody that we’re playing and it meaning something.”