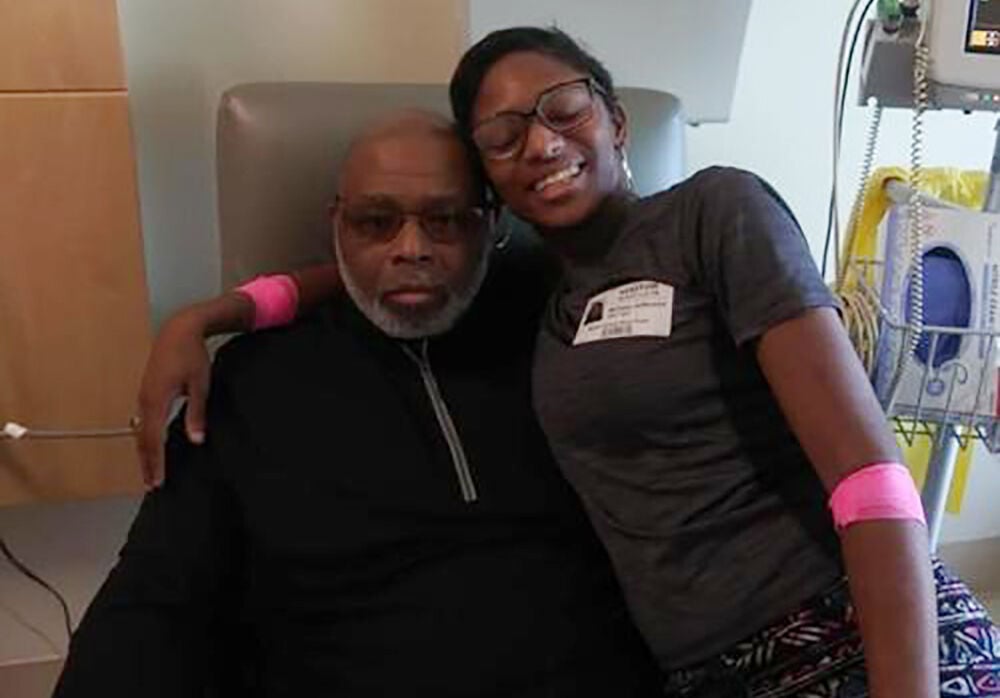 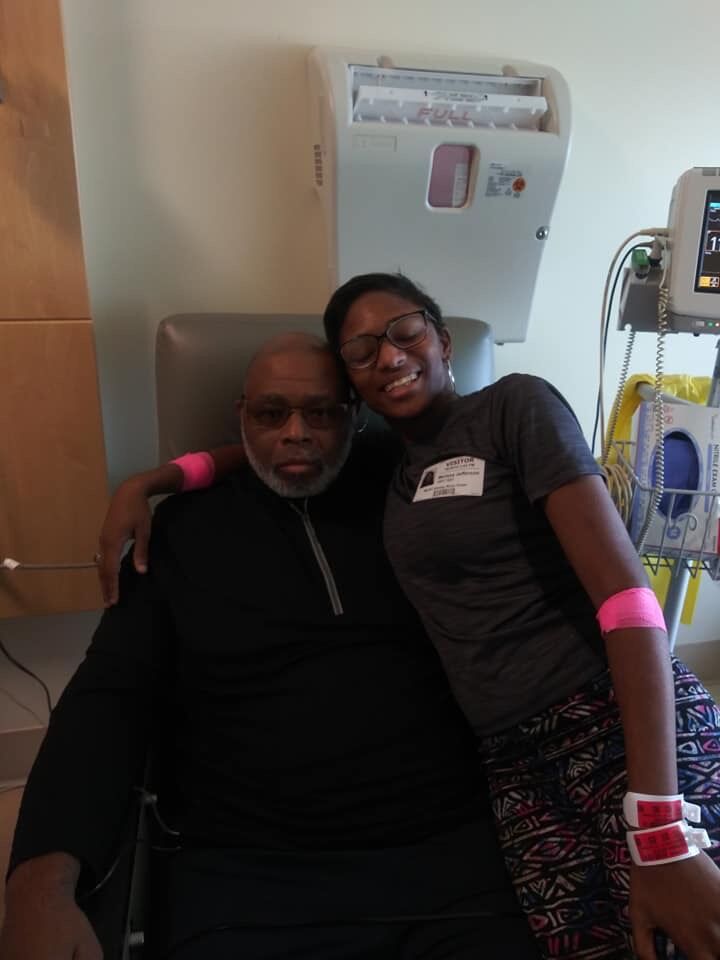 Melissa Jefferson (right) with her father, Melvin Jefferson, after she donated her stem cells for her father's bone marrow transplant at the Medical University of South Carolina in Charleston in September 2018. Melissa Jefferson/Provided 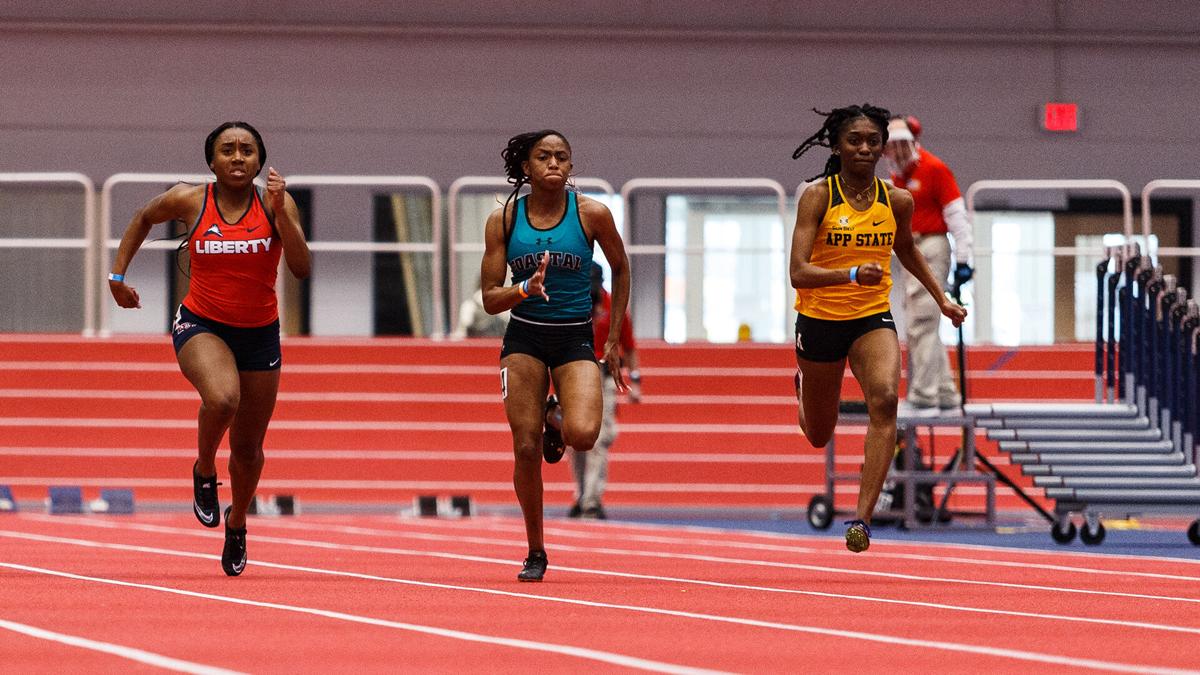 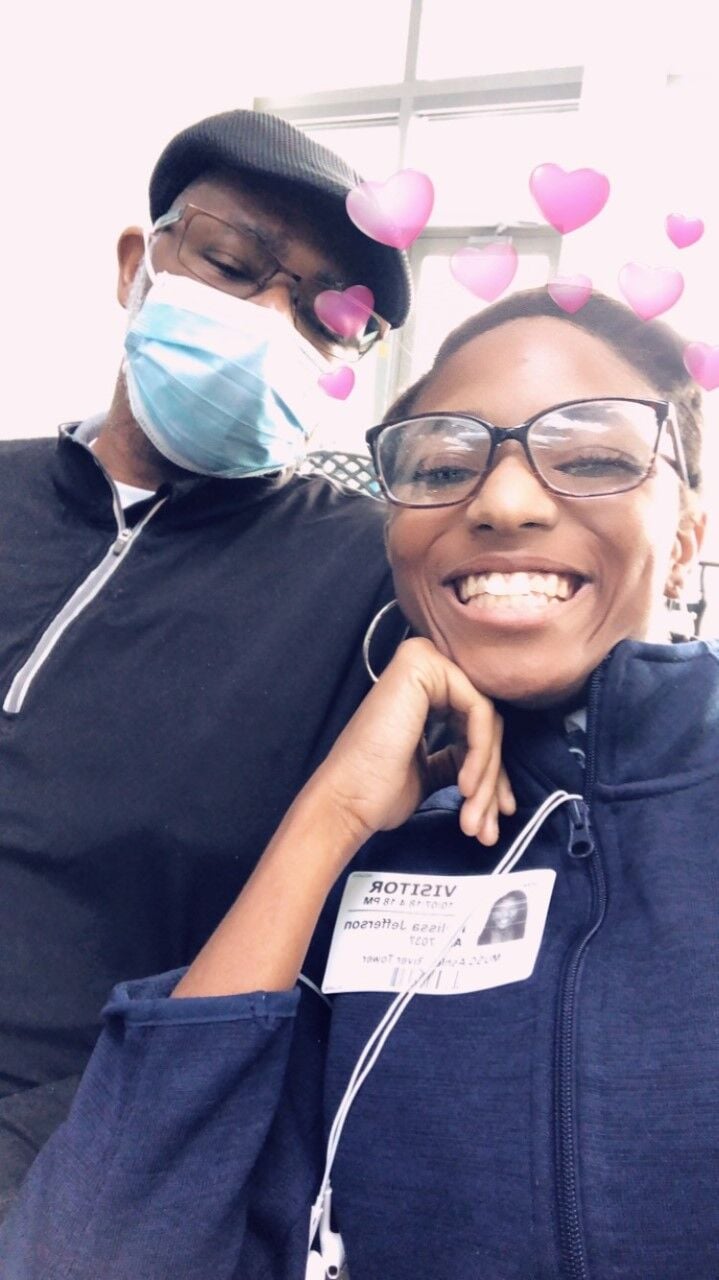 In a social media post on Snapchat, Melissa Jefferson (right) is with her father, Melvin Jefferson, after she donated her stem cells for her father's bone marrow transplant at the Medical University of South Carolina in Charleston in September 2018. Melissa Jefferson/Provided 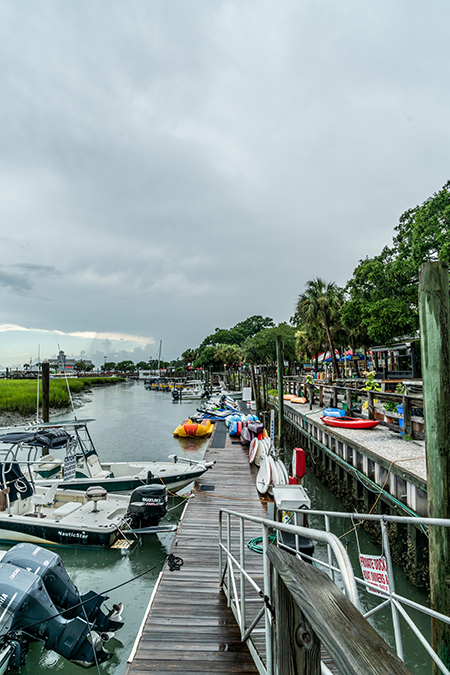 CONWAY — Melissa Jefferson hates needles, so staring at them for a two-day procedure in September 2018 at the Medical University of South Carolina in Charleston caused reality to set in.

"My dad better know that I love him," she remembers thinking.

Melvin Jefferson, her father, was nearby, a recipient of Melissa's bone marrow due to a diagnosis of myelodysplastic syndrome (MDS) in early 2018.

It's a disorder where the body no longer makes enough healthy blood cells in the bone marrow and can result in leukemia.

Melissa, the baby in a family of six children, was the preferred match.

The pain of a bone marrow transplant didn't deter her, and neither did the needles.

“It’s my dad, and I want him around for a long time, so I didn’t have a problem doing it,” said Melissa, a former Carvers Bay High School and current Coastal Carolina track star.

Melvin initially had a stem cell match for the bone marrow transplant from someone outside the family, but that person was found to have sickle cell anemia, a red blood cell disorder.

He found more matches, only to suffer the same fate — issues with the cells that made a transplant too risky.

In situations such as these, family is always an option.

Melissa has five half-siblings from Melvin and his wife, Johanna’s, previous marriages: two sisters on her father’s side and a sister and two brothers on her mother’s side, all in their 30s or early 40s.

Both of Melissa’s sisters on her father’s side came back as partial matches when they started testing next-of-kin.

Melissa, just 17 and a senior in high school at the time, came back as a preferred match in August 2018.

“I remember telling my mom, I was like, 'I had a feeling it was going to be me,'” Melissa said.

In September of that year before the actual transplant, Melissa had to go to the MUSC for further testing after they found out she was a preferred match, and was given a donor advocate and a donor coordinator.

The doctors there told Melissa she didn’t have to go through with it if she didn’t want to, but Melissa was determined she was going to help her father.

Melissa said that she wasn’t nervous until the day she actually had to go through with the transplant on Sept. 25, 2018.

During the transplant, she had to have an IV in both her wrists.

One IV took the blood out and sent it over to a machine that would separate the blood from the plasma in order to obtain Melissa’s stem cells; the other allowed the blood to go back into her arm through the other IV.

The transplant was ultimately successful, with Melvin staying at the hospital for the following 100 days. Six months to a year after the procedure, Melvin had 100 percent donor cells.

Although he is still unable to work — he was a landscaper at Brookgreen Gardens before his illness — Melvin is doing much better and is going to the doctor less and less often.

Melvin had to get all of his immunization shots over again and still needs the shingles vaccine, and is not allowed to do certain things, such as digging, because of the chance of bacterial infection.

Melvin said his blood cell count is 13.7 or 13.8 hemoglobin grams per deciliter, just a shade under the normal count for an adult male of 14 to 18, according to the Leukemia and Lymphoma Society.

When Melvin got out of the hospital, he had to wear a mask for roughly a year because his immune system was compromised.

This primed him for the COVID-19 pandemic that hit the U.S. in early 2020, as he was already used to wearing a mask in public at that point.

When Melvin and Johanna first got married in 2000 when they were both 37, they decided that it would be God’s will whether or not they had a child together, already having five children between the two of them.

And then along came Melissa, and the Jeffersons had no clue at the time just how much of a blessing she would turn out to be.

“Who would’ve thought 17 years later, the purpose for her being born was to be my bone marrow donor?,” Melvin said. “I think about that all the time. Trust me, I really do. We don’t know what God has in store for us, but we always should realize that there’s a purpose he has for us.”

Melissa, 20, is the youngest of her siblings by more than a decade, with the others ranging from 31-40.

Melvin says they lovingly tease her for being the baby of the family.

Melissa has always held a special place in Melvin’s heart because she is the youngest, and is definitely "daddy’s little girl."

Their connection is special, and always has been, with Melvin recalling an interaction from when Melissa was a youngster.

“When I had gotten dressed, I’ll never forget it, and she was a little girl, she was a baby, and (there are) certain things you do when you compliment people (that) children pick up on, she said to me, ‘Daddy, you look pretty,” Melvin said.

“And I thought it was so cute because her saying that, not realizing you don’t tell a guy that he looks pretty.”

A love of running

Melvin said that Melissa would want to go everywhere with him when she was a little kid, and she would run around the house a lot, which is where her love of running began.

Melvin said she began running when she was 5 years old.

“She would beat the little boys,” he said. “We didn’t have to push her toward track and field. It was a natural thing for her.”

So it was little surprise for Melvin to see Melissa excel on the track at Carvers Bay.

For the Bears, Melissa was a four-time All-State and All-Region selection; a four-time team MVP; won the 1A state title in the 100-meters her senior season; and finished second in the 200 meters and third in the 4x100 relay at the state championship meet that same year.

She also excelled early on in her Carvers Bay career, as she won the state championship in the 100 meters, 200 meters, and the 4x100-meter relay her freshman year.

Carvers Bay track and field coach Issiah Tucker, who coached Melissa from 8th to 10th grade, saw how the relationship Melissa had with her father helped fuel her to push herself to the limit on the track.

“Even though he was ill, he would be at the track meets supporting on his daughter, and (she) would look up in the stands and see her father; I think that motivated her more, too,” Tucker said.

Battling for his life off the field, CCU baseball's Gilmore inspires with his fight

Part of the reason Melissa decided to run track for Coastal Carolina was to be able to stay close to come while her father recovered from the bone marrow transplant.

Melissa found immediate success on the track as a Chanticleer, winning Sun Belt Freshman and Newcomer of the Year for women’s indoor track and field her freshman year in 2020.

The outdoor season was canceled due to COVID-19, but Melissa made up for it by doing well in the 2021 indoor season.

Melissa was named second-team All-Sun Belt for the second straight year and had a second-place finish in the 60-meter dash finals with a new personal-best time of 7.41 at the Sun Belt Conference Women's Indoor Track and Field Championships.

Both times were the second-best marks in the Sun Belt in each event this season and the second-fastest in school history, behind only Erica Peake's time of 7.39 in the 60 meters and 23.40 in the 200 meters.

“She’s always ready to work,” Goodman said. “She’s very happy and she’s always got a smile on her face. I’ve never had to shout at Melissa for not doing something right. She’s very easy to coach and she wants to understand how to get better.”

Melvin was glad to finally be able to watch Melissa compete at a meet at the Alan Connie Shamrock Invitational at Myrtle Beach High School’s Doug Shaw Stadium on March 19 -20.

Melvin had not been able to see her compete in an outdoor event in college because of the pandemic, and he was also unable to see any of her indoor events this season because the venues either weren’t allowing spectators or were too far away.

While Melissa’s success in track and field has brought the Jefferson family a lot of joy, Melvin takes the most pride in the person that Melissa has become and that she has “never met a stranger."

"If there were a lot more Melissas, this world would be a much better place.”