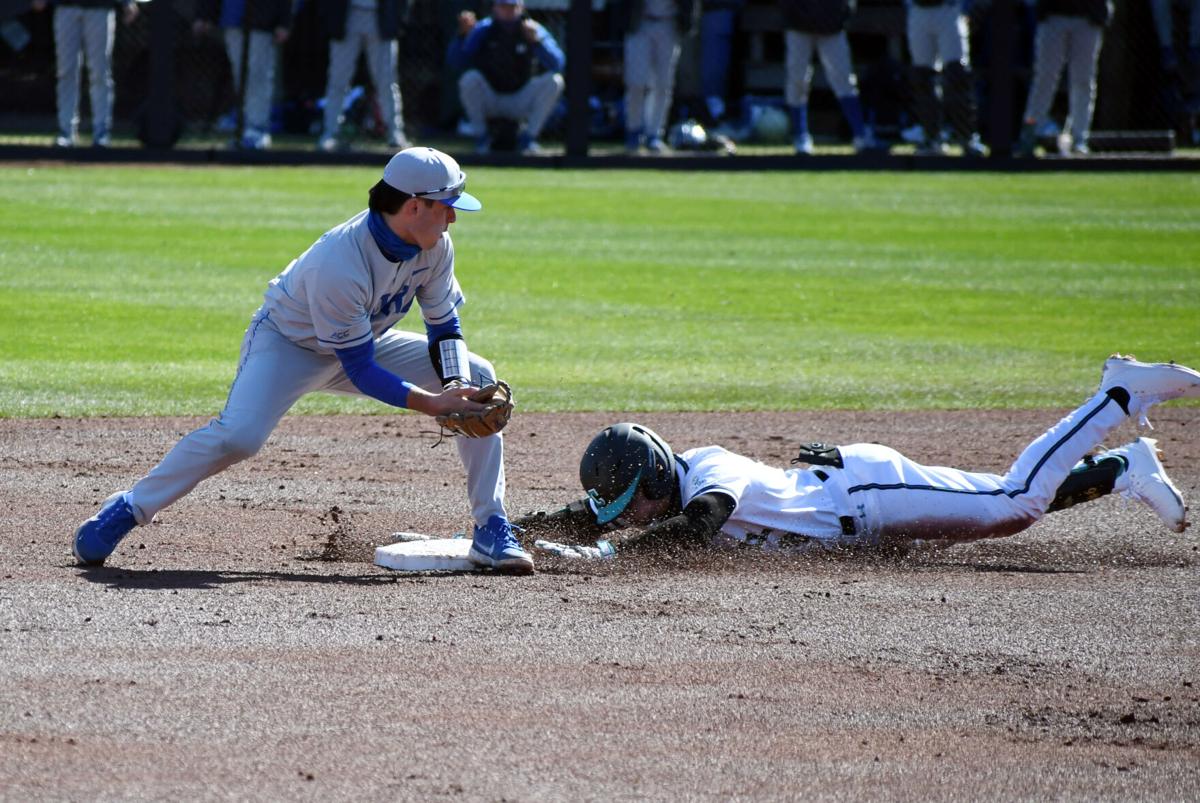 Coastal Carolina's Nick Lucky legs out a double in the first inning, the first of two extra-base hits for Lucky in a 12-4 loss to Duke on Feb. 20, 2021 in Conway, SC. 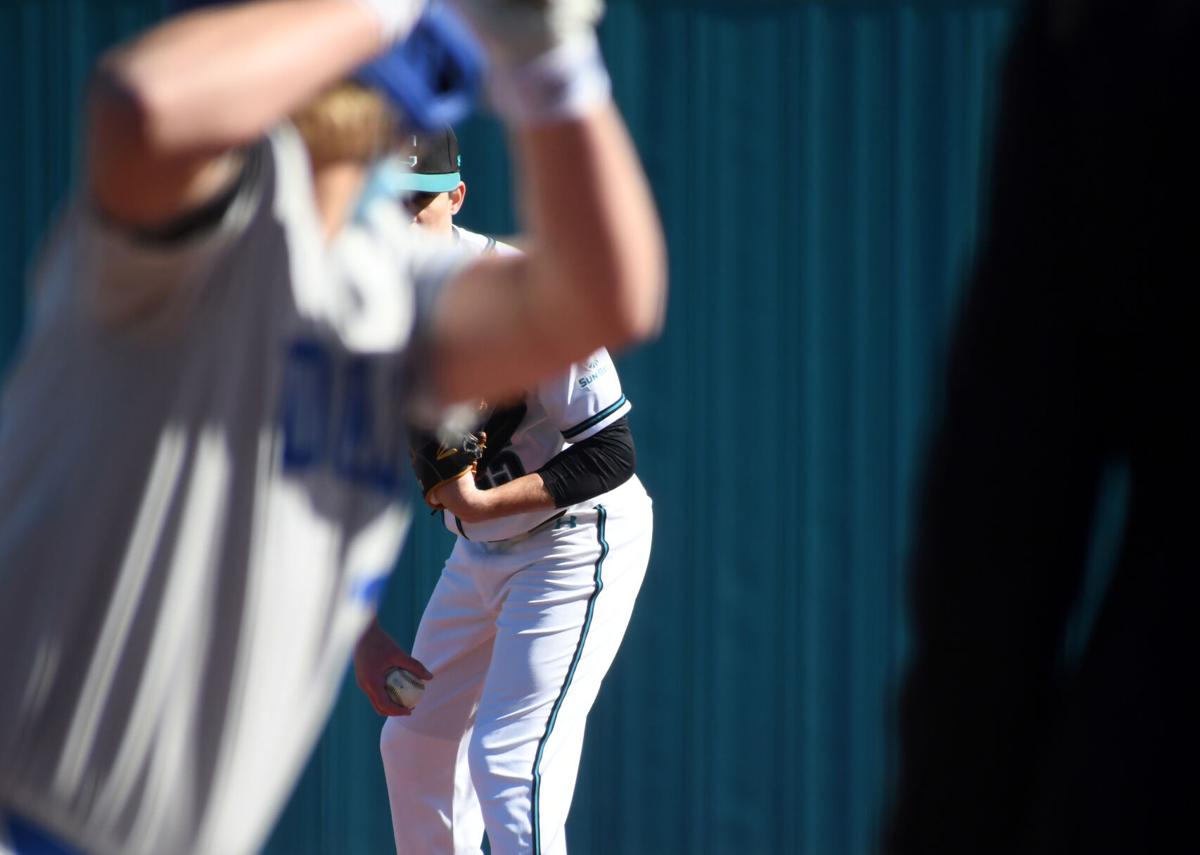 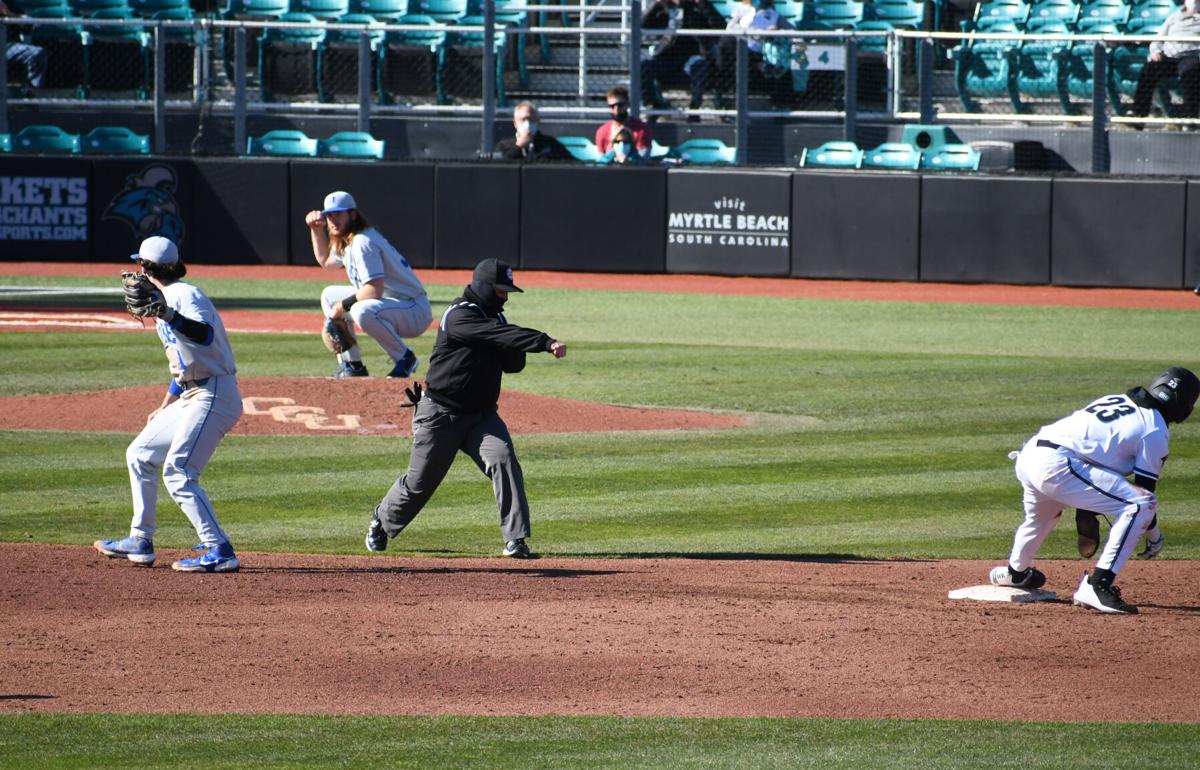 CONWAY — It was a bittersweet day for the No. 23 Coastal Carolina baseball team, as it played its first game in almost a year, but it was far from the result it wanted.

It was the first time either team had played since the 2020 season was shut down in mid-March due to the COVID-19 pandemic — it had been 346 days on the dot for the Chants — and the Blue Devils definitely brought their bats.

“It felt good while it was still a game,” CCU head coach Gary Gilmore said of playing again. “The last few innings were miserable.”

The Chants were only down 4-3 heading into the sixth inning, but the Blue Devils scored three runs in the inning to extend their lead to 7-3 thanks to shortstop Ethan Murray grounding out to score second baseman Will Hoyle and right fielder Peter Matt hitting a two-run bomb.

It was the second two-run homer of the game for the Blue Devils, the first coming in the second inning from first baseman Chris Crabtree.

Duke outscored Coastal 5-1 over the final three innings in a game that took over four hours.

Cooper Stinson started the game on the mound for the Blue Devils and recorded three strikeouts, two hits, three walks and three runs, only one of them earned, over five innings. Richard Breteron had four strikeouts in two innings of relief.

On the mound for the Chants was redshirt sophomore pitcher Jacob Maton, who made his first-ever start in college. Maton missed all of 2019 with an elbow injury and was geared up to come back in 2020 but never saw the field due to the season being canceled early.

“Obviously, it was great being back out there and everything,” Maton said. “I didn’t really feel as good as I was hoping to feel going out there; a lot of things were off edge-wise, but being out there again, it’s just no better feeling getting to play again.”

“He did a decent job,” Gilmore said. “I just want Jacob to work so hard to come back from two years of being of with Tommy John surgery. For me, I just want to see Jacob Maton get back to where he was in high school … he’s one of the hardest working, most dedicated kids I’ve ever been around, and we’ve just got to figure out where it’s at.”

Gilmore liked Maton’s slider and breaking ball, but is hoping to see his fastball improve to 93 or 94 miles per hour like it was when he was in high school.

Maton doesn’t think the score of the game is a good indicator of what the Chants are capable of this season.

A bright spot on offense for the Chants was junior second baseman Nick Lucky, who had two hits and two runs on the night, including a 343-foot home run in the seventh inning.

“Nick did a good job offensively,” Gilmore said. “The first hit, we’re fortunate it found the Bermuda Triangle and nobody could get to it, and the ball he got offered for the home run was a fantastic job of hitting. I expect Nick to be a very offensive player for us.”

However, Lucky did cost the Chants on the defensive side of the ball, committing two errors on the day.

The only other Coastal Carolina hit in the game was from sophomore shortstop Eric Brown, who knocked in an RBI single to score senior first baseman Fox Leum in the fifth inning.

With a very inexperienced team, the Chants will have to work to find their identity over the first few weeks of the season.

“It’s not that we don’t have good players; we’ve got a whole bunch of guys trying to figure out can they even play in this level of college right now to a certain degree,” Gilmore said. “They (Duke) have a lineup experience-wise that’s similar to what we had in 2016 when we had all those guys that had 5-, 600 at-bats on our team that played. We just don’t have that right now.”