John Poston, vice chairman on the Horry County Board of Education, is hospitalized with COVID-19, according to board Chairman Ken Richardson. Horry County Schools/Provided 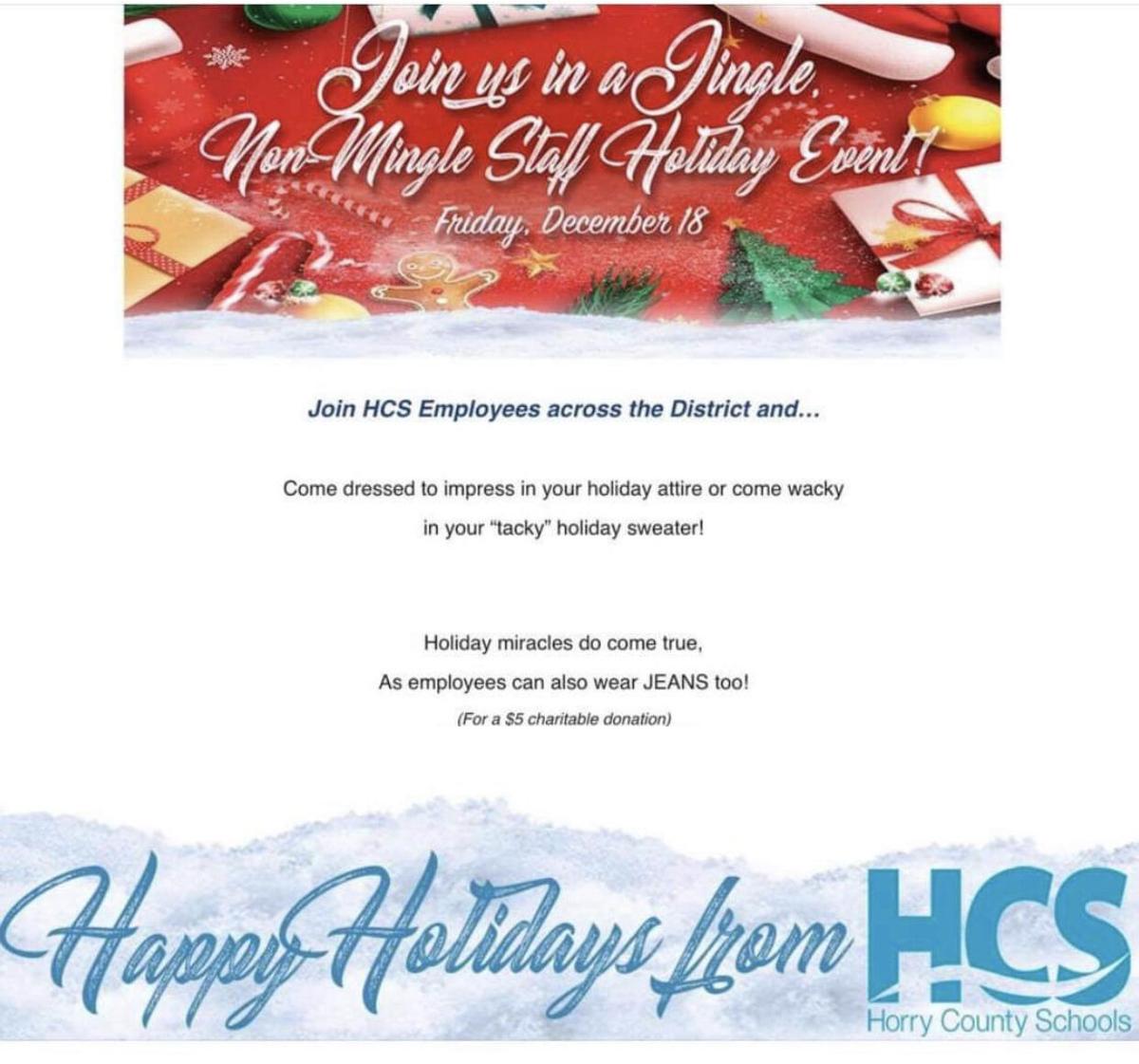 A note sent to teachers that asked for a $5 donation to wear jeans to a holiday party.

MYRTLE BEACH — As more than a dozen school districts across South Carolina will offer bonuses to their employees for the holidays — with some receiving as much as $1,000 apiece — staffers with Horry County Schools were asked for $5 contributions to wear jeans to a Friday “Jingle Non-Mingle Staff Holiday Event.”

“Holiday miracles do come true, as employees can also wear JEANS too! (For a $5 charitable donation),” the email said.

The “miracle” wouldn’t come in the form of a bonus — confirmed by an HCS spokesperson — but instead common clothing that most teachers wear on Fridays as part of teaching online.

To say that teachers are incensed over the timing of the $5 fundraising request would be an understatement — but it was ultimately a feeling of downright disappointment, rooted in a feeling that empathy from their superiors is non-existent.

“So, when HCS sent an email about a miracle happening for Christmas, we took a collective breath in. Could this finally be a moment where we are shown appreciation? Do the powers that be finally want to include us at the table? To show their gratitude and acknowledge our efforts?” said Jenny Leckey, a former HCS Teacher of the Year and current high school English instructor.

“The answer is no. Instead, we are insulted by being told we can wear jeans for a $5 donation to a religion-based charity. It’s basically asking us to give part of our paycheck back to wear a comfortable piece of clothing. This isn’t anything against the charity; they do wonderful things to support this community. No, this is about respect, or lack there of. That email triggered a deep seeded feeling of frustration and anger that we have been burying for way too long.”

Leckey wasn’t alone in feeling angry, as an elementary school teacher, who asked to remain anonymous out of fear of retribution from the district office, was besides themselves.

“How dare you HCS. How dare you take advantage of us, your teachers and staff, not protect us nor your students like you originally promised, and not thank us properly,” the teacher said.

The teacher was referring to the statewide hold on annual raises given to teachers, which were pushed off due to the coronavirus pandemic.

On Thursday, South Carolina Department of Education and Superintendent Molly Spearman called for the raises to retroactively be paid due to a statewide teacher shortage.

HCS has felt its own share of shortages, with the district confirming that 60 staff members have resigned since the beginning of the school year, including 36 teachers, 20 custodians and four at the district office.

The district spokesperson indicated that they are actively looking for replacements.

The district was recently named the second-best employer in South Carolina, according to Forbes — something that teachers believe to be inaccurate.

“HCS District Office, you should be ashamed of how poorly you treat your employees. Forbes obviously didn’t ask any of us when you were voted as one of the best places to work in South Carolina,” a teacher said.

“You’re going to lose good teachers if you continue to trample on us, take advantage of us, and not give us the bonus and steps that we deserve.”

The districtwide shortage of staffers has also been compounded by mass quarantines reported on HCS’ COVID-19 dashboard, with 282 out as of 3:50 p.m. on Friday afternoon.

The district also has 165 active COVID-19 cases as of Friday, with it reaching 180 on Thursday.

The sudden staffing shortages have pushed schools to ask teachers to use their planning periods to cover other classrooms, something that teachers are not currently being compensated for. The district confirmed that some principals have had to ask teachers to cover classes over the past few weeks.

HCS did not respond to multiple messages looking for clarification.

“If the district office wants to help, come substitute for the teachers in quarantine,” a high school teacher said. “The same teachers they ask to come to work in unsafe conditions that are using planning periods to cover the shortages. Seriously, it is laughable to say the least.”

Multiple teachers were concerned with ongoing cleanliness issues, especially considering custodial shortages throughout the district — with many taking on the cleaning themselves, “again without raises or bonuses for the extra work.”

One indicated that they had to ask for their classroom to be cleaned after only the trash was taken out from the prior day, while another said that they’ve had to clean desks, floors and plexiglass themselves.

The district indicated that they are indeed short staffed on the custodial side, and have asked “interested employees to volunteer for custodial tasks.”

HCS also indicated that “this additional work is voluntary and allows employees to earn extra pay.”

Teachers are not offered this pay, instead it is offered to those in other positions such as bus drivers and cafeteria workers that decide to add to their work week.

Despite the shortages, HCS insists that “schools are cleaned throughout the day,” something that more than a dozen teachers from different schools say is not true.

According to a note acquired by the Post and Courier Myrtle Beach, Kathy Stockholm, HCS coordinator of building services, is working with HCS Human Resources to resolve lingering issues.

“I have been working with Human Resources to allow us to utilize Bus Drivers, Cafeteria Workers, Retired Custodians, and other staff that may be willing to help us out during our staffing shortage. I had asked that they wave the provision of dropping their wages to substitute wages. I have been asked to submit names and schools that know or have individuals willing to work,” Stockholm wrote.

In another note, Stockholm said that “there seems to be zero substitutes available.” She spoke to extra hours being worked by current staff, while also proposing that custodial workers at one school help at others.

Plexiglass in schools: A placebo or protector? Experts sound the alarm.

“We have many schools with multiple openings and are in need of assistance. Please take to all of your staff and check their availability to assist at other schools. It could be a couple hours in the morning, evening, or whatever they can do. We need to really think outside the box this year with staffing and come up with as many ways as possible to fill our open positions,” Stockholm said.

“We continue to interview every week for our open positions, as well as compelling Human Resources to act on those that have been out long term with no plan to return to work. I know that there are schools in each region that are in need.”

While feeling they have to do the work in order to protect their students, one teacher said that the dangers that come with it are becoming overwhelming — and took aim at Spearman and her declaration that all teachers have personal protective equipment at their fingertips.

“She has said in interviews that we have N95 masks and all other PPE that we need to stay safe and it is a lie. I have not once been offered an N95 mask since school started,” the teacher said.

With the district allowing those in both HCS Virtual and hybrid instruction modes to switch prior to the second semester, the district could not guarantee that teachers would remain with their same assignment.

“Staffing decisions are dependent upon student enrollment. We will align our staff to match any adjustments that may be necessary due to second-semester changes,” an HCS spokesperson said.

For one virtual teacher, that edict made them feel uncomfortable and “forced into a corner.”

“I absolutely want nothing to do with going back into the classroom,” the teacher said. “But I’m guessing I won’t have a choice.”

As the district’s deadline for “hybrid” students to opt into HCS Virtual looms at midnight on Monday, Leckey says that teachers will no longer remain quiet about what is happening behind HCS’ closed doors.

“Enough is enough. We are done with this treatment. We do not accept it anymore. And as far as speaking up about it, I want other teachers to know that now is our time. We have to decide enough is enough and collectively demand that the culture changes,” Leckey said. “That teachers are treated with respect. That we are all on the same team. When that shift changes, the idea of a jeans day miracle won’t even be needed anymore. We will have the career culture that we all dreamed of when we started on our teaching path.

“I just hope that the powers that be will finally step into our shoes and see it from our perspective. And be the change we need, and deserve, to see.”