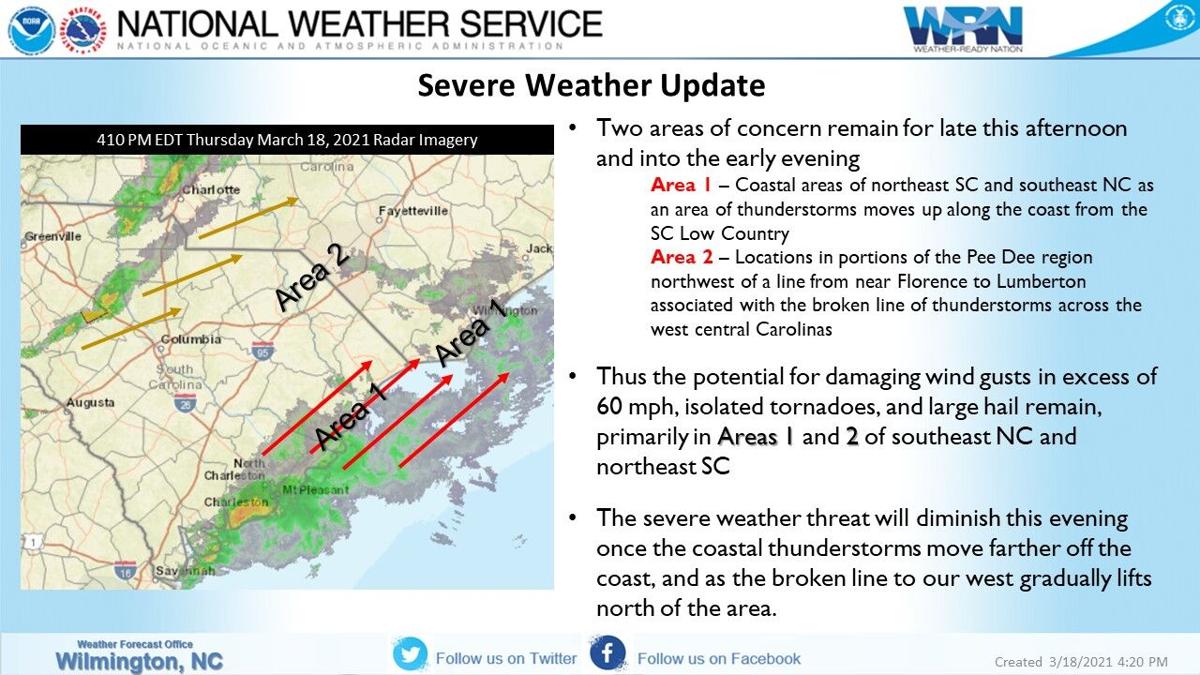 The National Weather Service released an update regarding the severe weather update for northeast South Carolina at 4:29 p.m. March 18. NWS/Provided 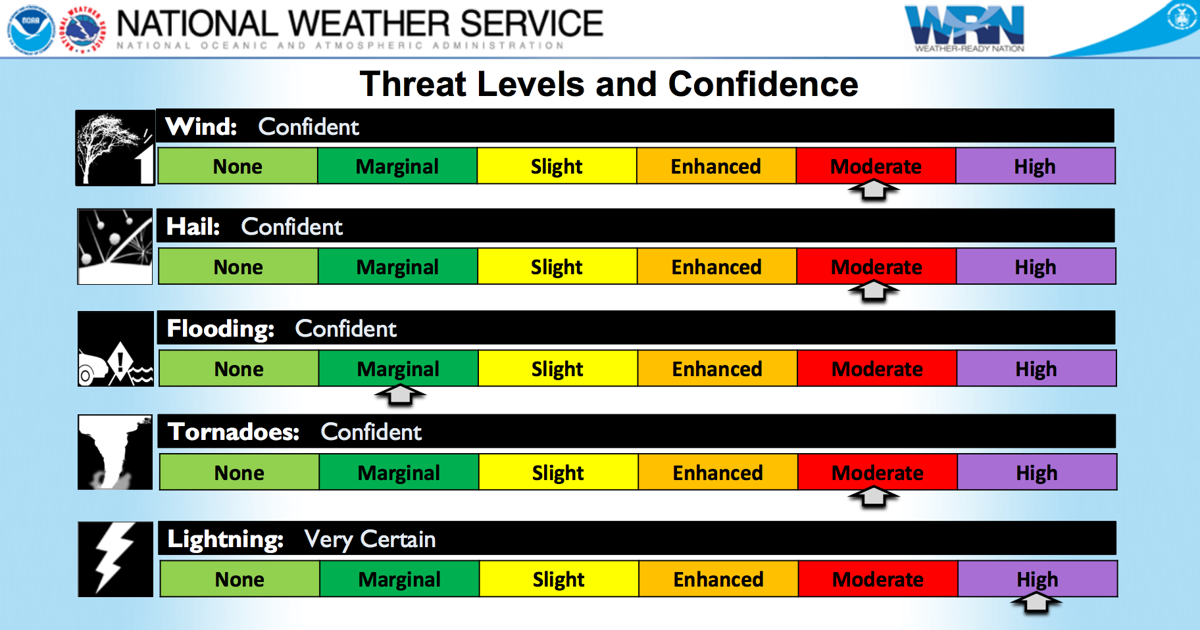 The National Weather Service released an update to threat levels for northeast South Carolina at 7:25 a.m. March 18. Courtesy of NWS

The National Weather Service released an update regarding the severe weather update for northeast South Carolina at 4:29 p.m. March 18. NWS/Provided

The National Weather Service released an update to threat levels for northeast South Carolina at 7:25 a.m. March 18. Courtesy of NWS

MYRTLE BEACH — The Grand Strand is expected to see severe storms and high winds after 5 p.m. March 18, as local officials are warning residents to locate a safe place in the event of a tornado and consider charging all devices in case of a power outage.

The National Weather Service in Wilmington predicts severe weather between 5 p.m. and 7 p.m. in the Myrtle Beach, Conway and Georgetown areas. Isolated severe thunderstorms could begin as early as 3 p.m., the NWS reports.

It's possible widespread thunderstorms could produce damaging wind gusts as high as 60 mph, tornadoes and large hail, according to the NWS.

With the National Weather Service severe weather advisory lasting until 7:30 p.m. and the storm almost past the Myrtle Beach area, little to no rain was seen around the Grand Strand.

The National Weather Service in Wilmington announced a Special Marine Warning for coastal waters from Surf City to Cape Fear, NC out 20 nanometers, until 7:30 p.m.

The National Weather Service in Wilmington announced the Special Marine Warnings on March 18 will continue to be in affect until 7:15 p.m.

The National Weather Service in Wilmington announced two Special Marine Warnings on March 18 that will be in affect until 6:30 p.m.

The second warning included coastal waters from Murrells Inlet to the South Santee River out 20 nanometers.

The National Weather Service in Wilmington announced a Special Marine Warning for the waters from Little River Inlet to Murrells Inlet from 20 to 40 nanometers.

The National Weather Service in Wilmington has said the overall severe threat is not as substantial as earlier reports have stated, but two areas are still at risk for severe weather, including northeastern coastal areas.

There is still potential for wind gusts of up to 60 mph, isolated tornadoes and hail in the area. Along with severe thunderstorms coming in from the low country.

"The severe weather threat will diminish this evening once the coastal thunderstorms move farther off the coast, and as the broken line to our west gradually lifts north of the area." NWS said.

Andrews, a town within Georgetown and Williamsburg counties, has postponed their town council meeting which was scheduled for March 18, due to the threat of inclement weather, according to a press release from Chaconas Parson, the town clerk. The meeting will be rescheduled for 6 p.m. on March 23.

As the inclement weather gets closer to the Grand Strand, animal shelters throughout the area are preparing to not only keep their furry friends safe, but also themselves.

Kelsi Guyer, the director of operations for The Humane Society of North Myrtle Beach, said they plan to close early at 4 p.m on March 18. Goyer explained this would allow their staff to get home safety before the storm.

In North Myrtle Beach, the dogs kennels have access to the outside, so Goyer said they make sure the doors remain closed so the dogs are protected from the elements. She added the cats rooms are fully indoors.

"If we do have any dogs that we know have any kind of storm anxiety or anything like that we do give them medication," she said.

During the storm all the animals will be secure in their facility but no one on staff will be on location. Though once it is safe to travel their staff will go an check on them.

Mikayla Moskov, a spokesperson for the Horry County Animal Care Center, outlined a similar process to that of North Myrtle Beach.

Moskov added the County Center was closed to the public at 2 p.m. March 18, when other Horry County government buildings closed.

"We do still have staff members out there right now, just doing whatever they feel necessary to secure, soothe any animals," Moskov said. "But they would be headed home soon to avoid any potential bad weather."

"This does not mean that we can let our guard down," the NWS warns, "as the potential for damaging wind gusts in excess of 60 mph, an isolated tornado or two, and large hail continues for this afternoon and early evening."

Conditions are predicted to improve as the storms move from west to east and off the coast this evening, according to the NWS.

City of Georgetown Mayor Brendon Barber hosted an emergency Facebook Live Thursday morning and announced that all city facilities would close at noon due to inclement weather.

Barber also announced that the city council meeting scheduled for March 18 at 5:30 p.m. would be moved to the following March 22.

Georgetown Deputy Chief of Police William Pierce asked that the public limit their travel today, and said police would have additional forces available to assist residents and respond to any emergencies that may arise.

Assistant City Fire Chief, Jeff Davis, echoed Pierce by saying the fire department would also have increased staffing for the day, and urged residents to stay home and stay safe.

The city of Myrtle Beach and Horry County Government announced closures and events that are being postponed due to severe weather threats.

The Kids' Track-and-Field Day at Doug Shaw Memorial Stadium originally scheduled for March 18 is being postponed.

Horry County Government will close all offices and facilities at 2 p.m. today. The Board of Fee Appeals meeting scheduled for 3 p.m. today is cancelled.

The Myrtle Beach International Airport remains open, but the county warns passengers to check their flight status with their airlines.

Thomas Bell, spokesperson for Horry County Emergency Management, said tornadoes in our region are capable of developing quickly and sometimes without much warning, which is why it's important to identify a safe place within your home or office to remain safe.

"This safe place should be on the lowest level and away from any windows and doors," Bell said. "If you are in a mobile home, you can consider moving to a sturdier structure and wait there until the storms pass."

If you receive a severe thunderstorm warning and it mentions that rotation is possible within that storm, pay extra attention to that storm, he said.

"That being said, today is a day to keep your phone charged," he said.

This is a developing story, so please stay tuned as the storm progresses for further updates.