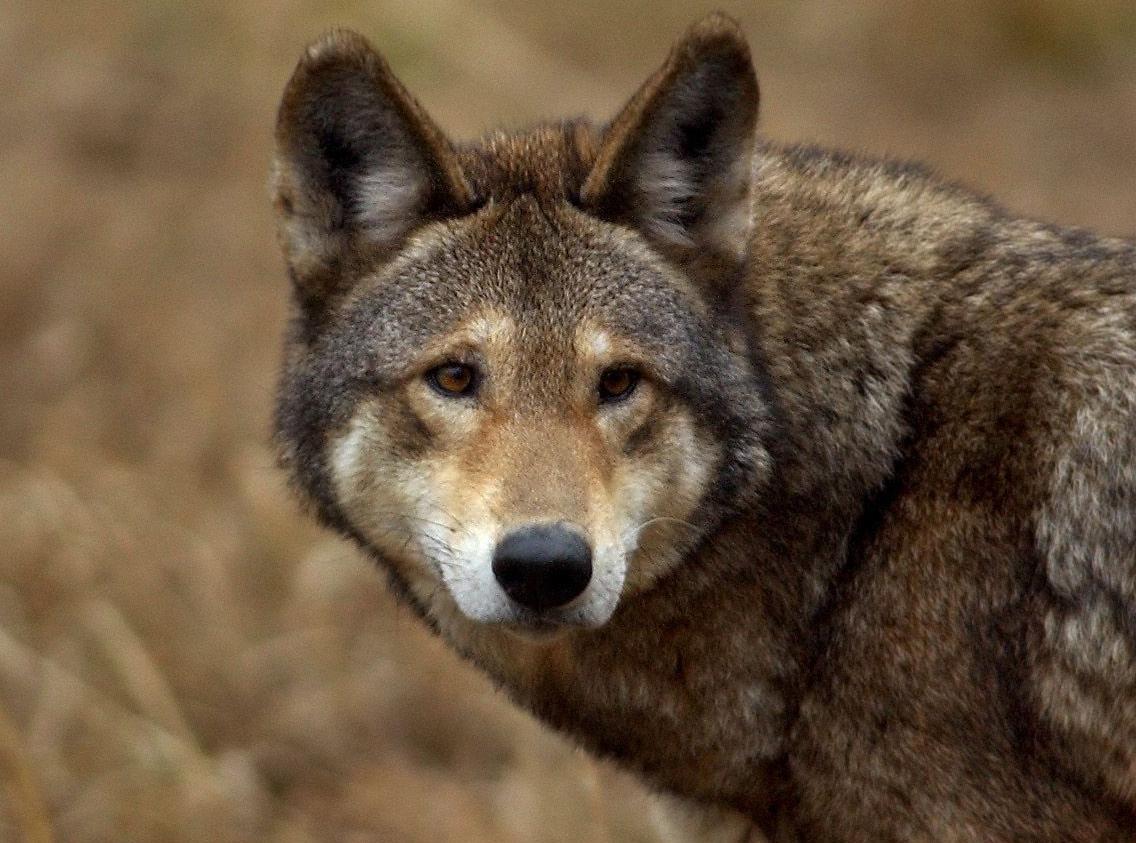 Four red wolves will make their way to Brookgreen Gardens at some point in 2021, most likely around summertime. File 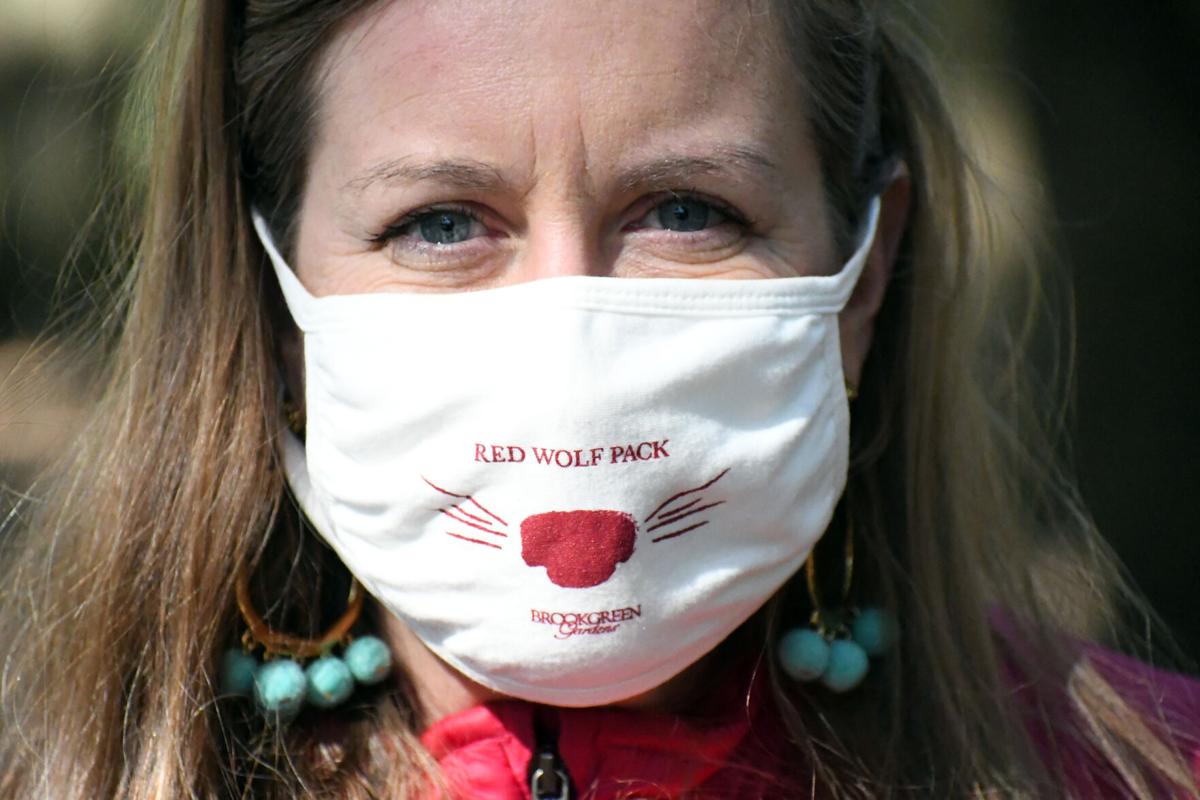 Hatton Gravely sports the Red Wolf Pack masks that donors can receive depending on the donation level. Nick Masuda/Staff 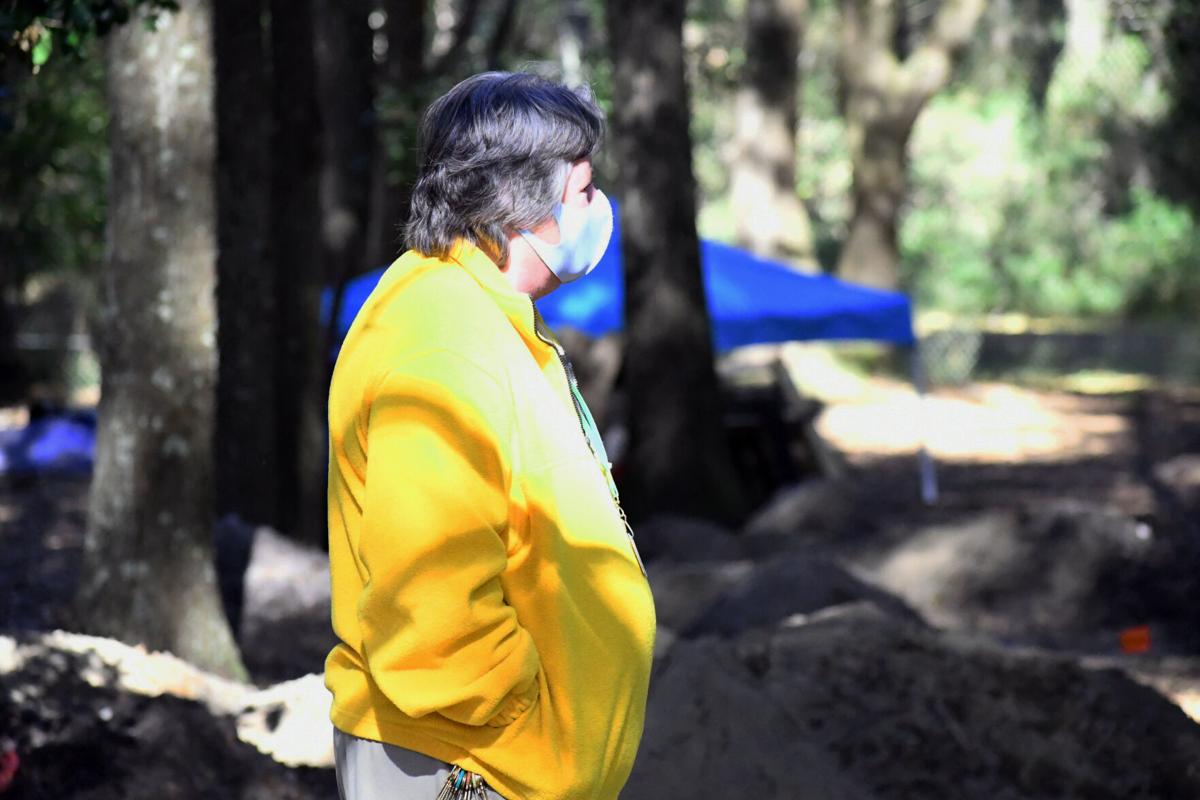 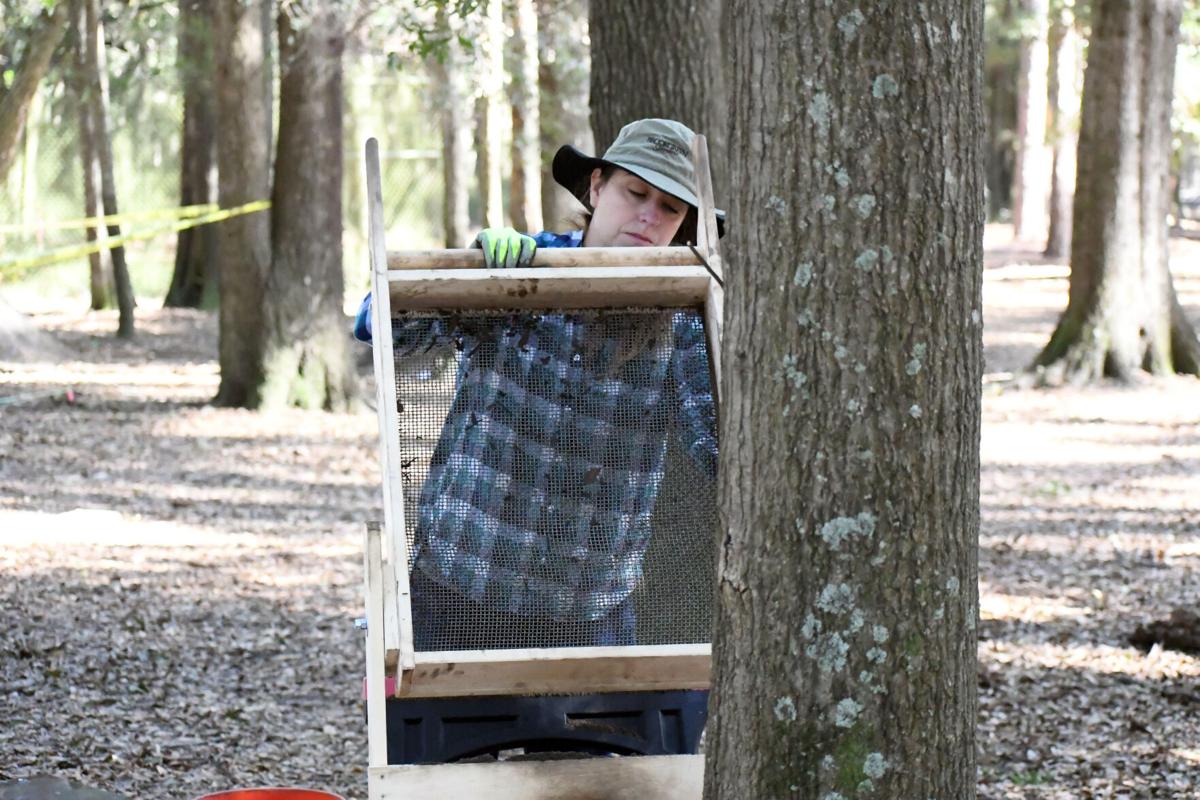 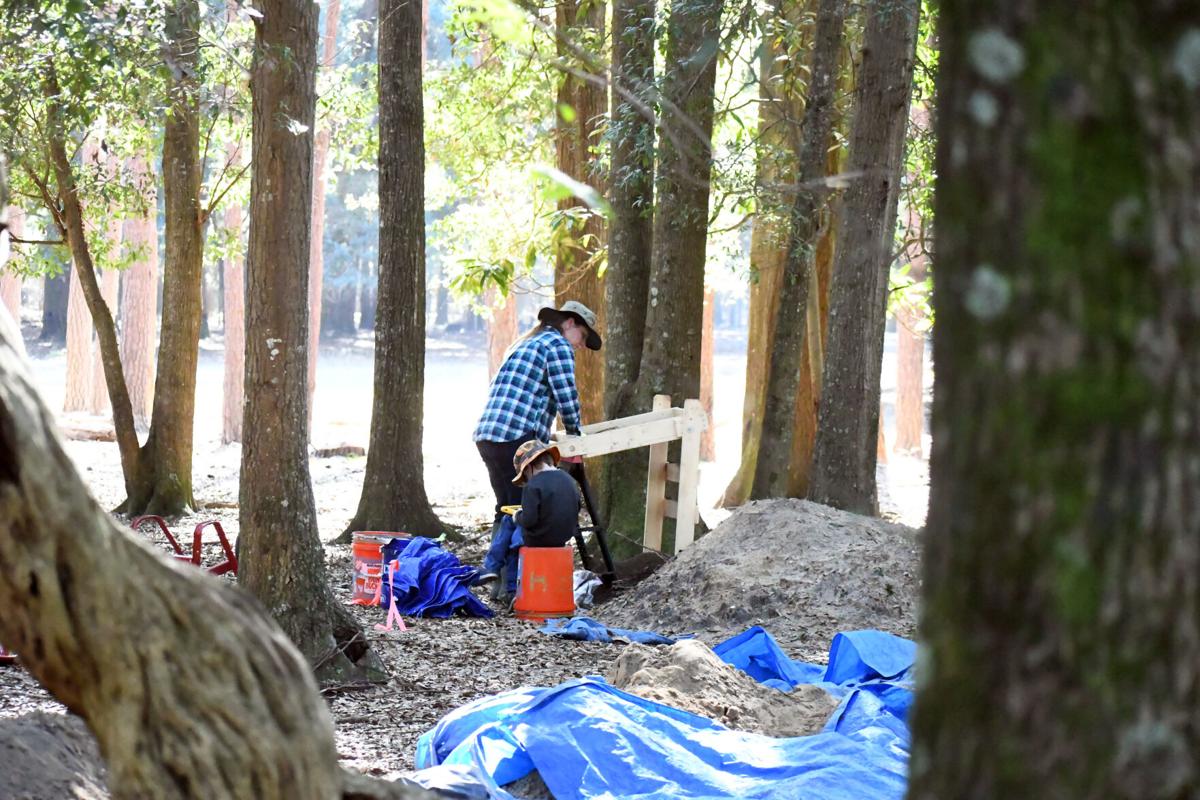 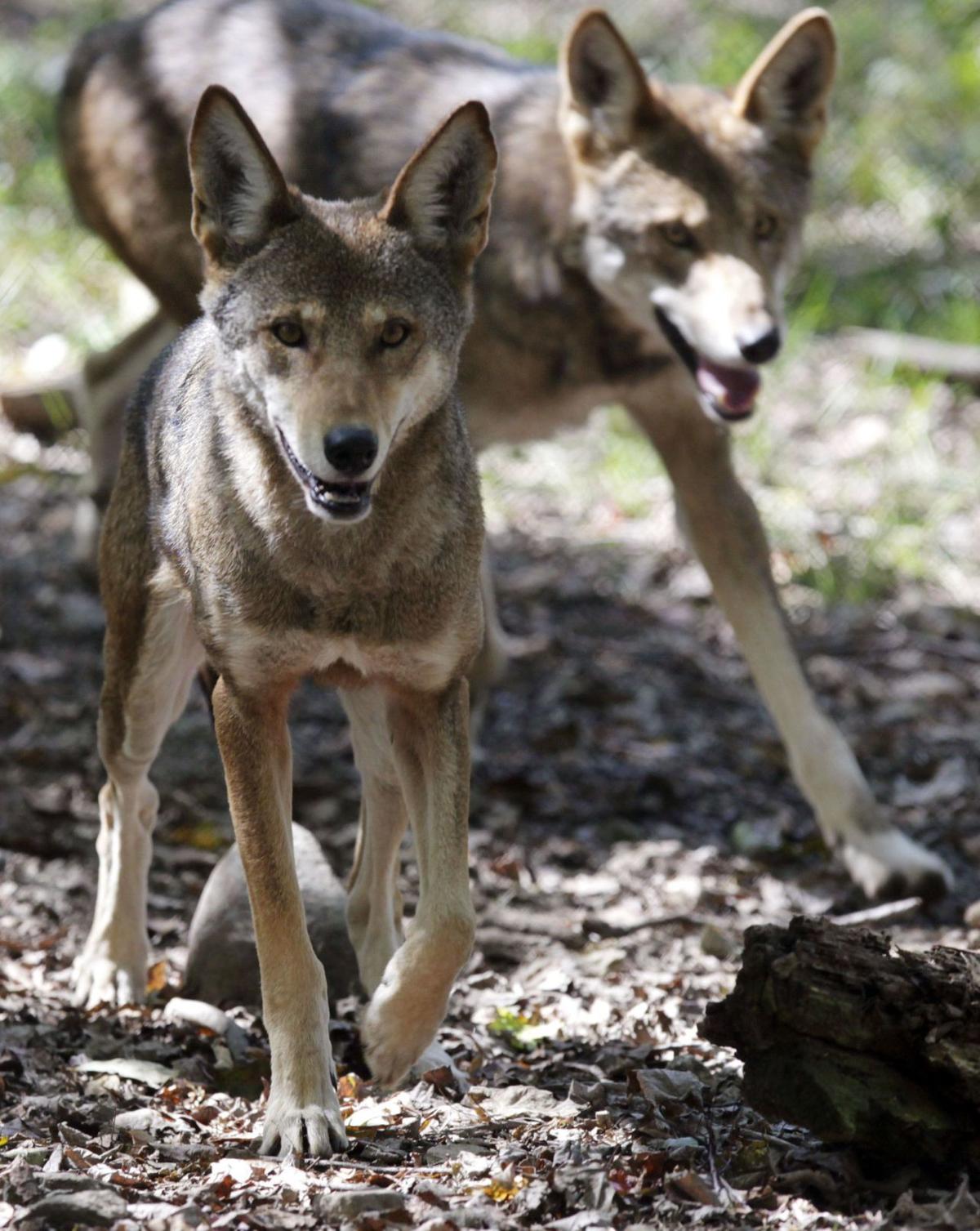 In this photo from 2011, red wolves walk around their enclosure at the Wolf Conservation Center in South Salem, N.Y. File 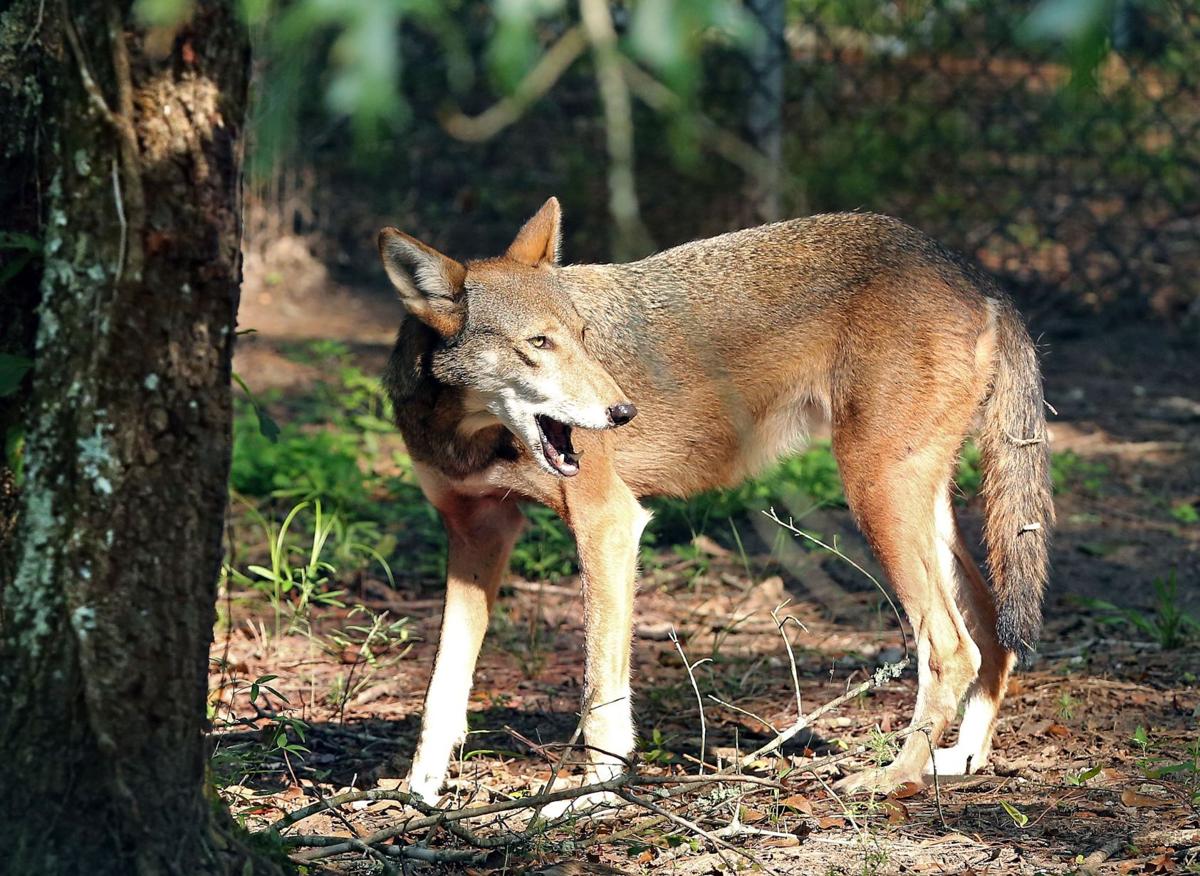 This red wolf, one of two sisters in a special viewing area, chews on something she had just scavenged from the ground at the Sewee Visitor & Environmental Education Center in Awendaw. File

Four red wolves will make their way to Brookgreen Gardens at some point in 2021, most likely around summertime. File

In this photo from 2011, red wolves walk around their enclosure at the Wolf Conservation Center in South Salem, N.Y. File

MURRELLS INLET — In the wild, humans are programmed to run away from or avoid apex predators — it’s a built-in survival instinct.

Don’t count the conservationists at Brookgreen Gardens among them.

They are sprinting after an opportunity to add an endangered apex predator, the red wolf, to their expansive facility along the Grand Strand with the goal of helping the animal overcome mounting odds in its battle against extinction.

“If we can help, we want to help, especially for those animals that are native to our area,” said Andrea DeMuth, Brookgreen Gardens’ vice president and curator of the zoological collection.

For nearly four decades, conservationists have attempted to thwart the decline in the red wolf population, with sporadic success until recently.

As of earlier this year, it was predicted that there are only seven red wolves alive in the wild, while there are approximately 250 in captivity at more than 40 facilities around the United States.

The bulk of the red wolves in the wild live near the Alligator River in North Carolina, with the species having stretched as far north as Virginia and as far west as Texas in previous decades.

“It’s hard to see numbers that low; it opens your eyes,” DeMuth said.

For the first time in more than 30 years, no known wolf pup was born in the wild in 2019, causing concern, as well as a lawsuit filed by the Red Wolf Coalition, Defenders of Wildlife and the Animal Welfare Institute on Nov. 16. They blame the U.S. Fish and Wildlife Service “for violations of the Endangered Species Act caused by new, illegal agency policies that bar the use of proven management measures to save wild red wolves.”

According to the Red Wolf Coalition, the wild red wolf population has plummeted by 70 percent in the wild since 2018.

“The Fish and Wildlife Service is managing this species for extinction,” said Sierra Weaver, senior attorney at the Southern Environmental Law Center and representing the three litigating groups.

While it knows that the recent track record hasn’t been good for anyone attempting to help the red wolf population, Brookgreen Gardens believes it has the serene habitat necessary to provide the species every opportunity for success.

The red wolf will be the facility’s first apex predator, with a 4-acre parcel already set aside at the 9,100-acre property. Currently, an archeological crew from Coastal Carolina University is doing excavation in the future home of the red wolves to assure that the federally protected land is safe for development.

Once that process is finished, construction bids will be taken and Brookgreen Gardens believes that they will be ready to take in the red wolves by the summer of 2021.

“The dig is going a bit slower because the archeologists have to socially distance,” DeMuth said, while also explaining that the workers can’t simply bus in together to save time, with each having to travel to Murrells Inlet on their own.

“It’s slowed down the process more than we thought it would,” she said.

While Brookgreen Gardens doesn’t get to choose which four red wolves will be brought to South Carolina from other captive facilities, the goal is clear: To pair and reproduce.

The red wolves will be paired off, with a pen providing roughly 2 acres for each duo.

DeMuth said it is possible that Brookgreen Gardens could receive a pair of aging, non-reproductive red wolves that could front the area and provide educators with a backdrop to pass along critical information about the conservation work surrounding the species.

This would allow any breeding duo to have the back of the facility, mostly out of public view.

“We are here to teach people why it is important to save this species,” DeMuth said. “Having them here helps with that.”

Mistaken for a gray wolf for the most part, the red wolf is considerably smaller than its gray cousin, usually weighing between 50-85 pounds. They feast on small animals such as rabbits, raccoons, squirrels and their favorite, white-tailed deer.

At Brookgreen Gardens, the first three are common throughout the facility, giving the red wolf the opportunity to learn to hunt, which is critical for any potential release back into the wild.

That release has been a focal point by red wolf conservationists since 1967 with the Endangered Species Preservation Act and again in 1973 when the Red Wolf Recovery Plan was completed and implemented.

From 1973 to 1980, more than 400 red wolves were captured, although fewer than 20 were considered to be genetically sound as over the years, red wolves mated with coyotes when they could not find a mate among their species.

In 1980, the species was declared extinct in the wild.

In 1981, the Endangered Wolf Center became the first facility to successfully breed endangered red wolves, with a female called Brindled Hope the first to give birth in the wild in 1986 along the Alligator River.

According to the center, many wild red wolves today have ancestry connected to Brindled Hope.

In 1984, the captive breeding program was approved by the Association of Zoos and Aquariums as the Red Wolf Species Survival Program, which oversees the diversity and health of those in captivity. Brookgreen Gardens is one of only five facilities in South Carolina that is accredited by the zoo association.

“Everything we do here will be done according to the Species Survival Plan, it will guide us throughout,” DeMuth said.

Over the decades, the red wolf population has grown to as high as 130 animals, only to slowly deteriorate mostly due to hunting and vehicle accidents as the human footprint extended closer to their habitat.

With hopes of taking portions of the red wolves in captivity and reintroducing them into the wild, the St. Vincent National Wildlife Refuge was introduced just off the Gulf Coast of Florida, where the red wolf pups could get the “wild experience,” including learning how to hunt before being relocated near the Alligator River.

As of November 2019, there are only six red wolves at the facility, including three pups.

While Brookgreen Gardens is limited to two separated pairs, red wolves are actually quite social, usually running in packs of five to eight animals.

Red wolves, which live up to seven years in the wild and 15 years in captivity, usually mate once a year in February, with pups born in April or May.

As the red wolf numbers dwindle, conservation organizations are choosing to go the legal route to try and stunt the deterioration of the species in the wild.

According to Red Wolf Coalition, Defenders of Wildlife and Animal Welfare Institute, they believe the U.S. Fish and Wildlife Service hasn’t heeded their advice on how to proceed with the conservation and is now trying exact change through the legal system.

Editorial: Don’t give up on red wolves

“We have given the service every opportunity to reverse course and supplement the last wild population of red wolves with captive releases. Sadly, with only seven collared wolves left in the wild, it’s apparent we can’t wait any longer,” said Jason Rylander, senior endangered species counsel at Defenders of Wildlife.

In November 2018, the USFWS was found in violation of the Endangered Species Act by “suspending proven conservation measures for the wild red wolves,” according to the Red Wolf Coalition.

According to the RWC, the USFWS has now “doubled down on its abandonment of those measures and invented a new, illegal policy that it claims does not permit it to release red wolves from the captive population into the wild. The agency also claims its rules do not allow the agency to address hybridization with coyotes. As a result, the world’s only population of wild red wolves is now on the brink of extinction.”

The Animal Welfare Institute has called upon USFWS to restart conservation efforts immediately.

“The ESA requires USFWS to carry out programs for the conservation of the red wolf and to ensure that its actions do not jeopardize the species’ continued existence,” said Johanna Hamburger, director and senior staff attorney for the Animal Welfare Institute. “The agency is failing on both counts.”

The USFWS issued the following statement:

"The U.S. Fish and Wildlife Service is committed to the recovery of the red wolf. We are engaged in recovery efforts and continuing to do so, including updating the Red Wolf Recovery Plan and increasing the captive population to ensure the genetic health of the species and support future reintroductions. The Service is also focusing on the management of the nonessential experimental population (NEP) in North Carolina."

The archeological crews have stopped digging and are sifting through what they’ve excavated, which has included remnants of pocket knives and utensils, among other items.

“Interesting stuff, but not as interesting as what’s coming,” DeMuth quipped.

Brookgreen Gardens is in the middle of a $250,000 fundraising campaign to build the new habitat, with $50,000 already in hand due to a Conservation Centers for Species Survival and U.S. Fish and Wildlife Service Recovery Challenge grant.

In addition, the Christy and Ken Taucher Donor Advised Fund of the Central Carolina Community Foundation has matched the grant, while an anonymous donor also contributed $50,000.

With hopes that the South Carolina community will continue to rally behind this effort, Brookgreen Gardens has introduced the Red Wolf Pack membership program, where donations are accepted and members receive perks.

For $25, the donor gets a red wolf card and decal for their vehicle; for $250, the donor receives a thank you gift that includes a red wolf face mask; and for $2,500 or more, the donor will be recognized with a plaque at the exhibit.

Brookgreen is encouraging those interested in helping to text redwolfpack to 71777, or visit their website at brookgreen.org/join-the-red-wolf-pack.