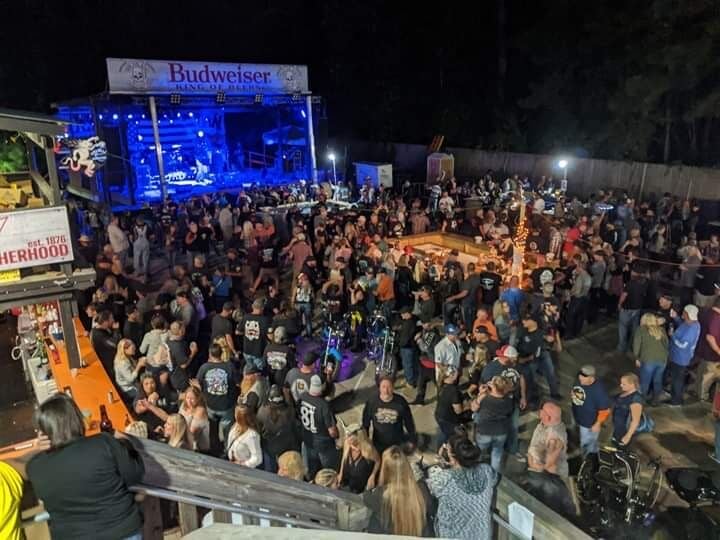 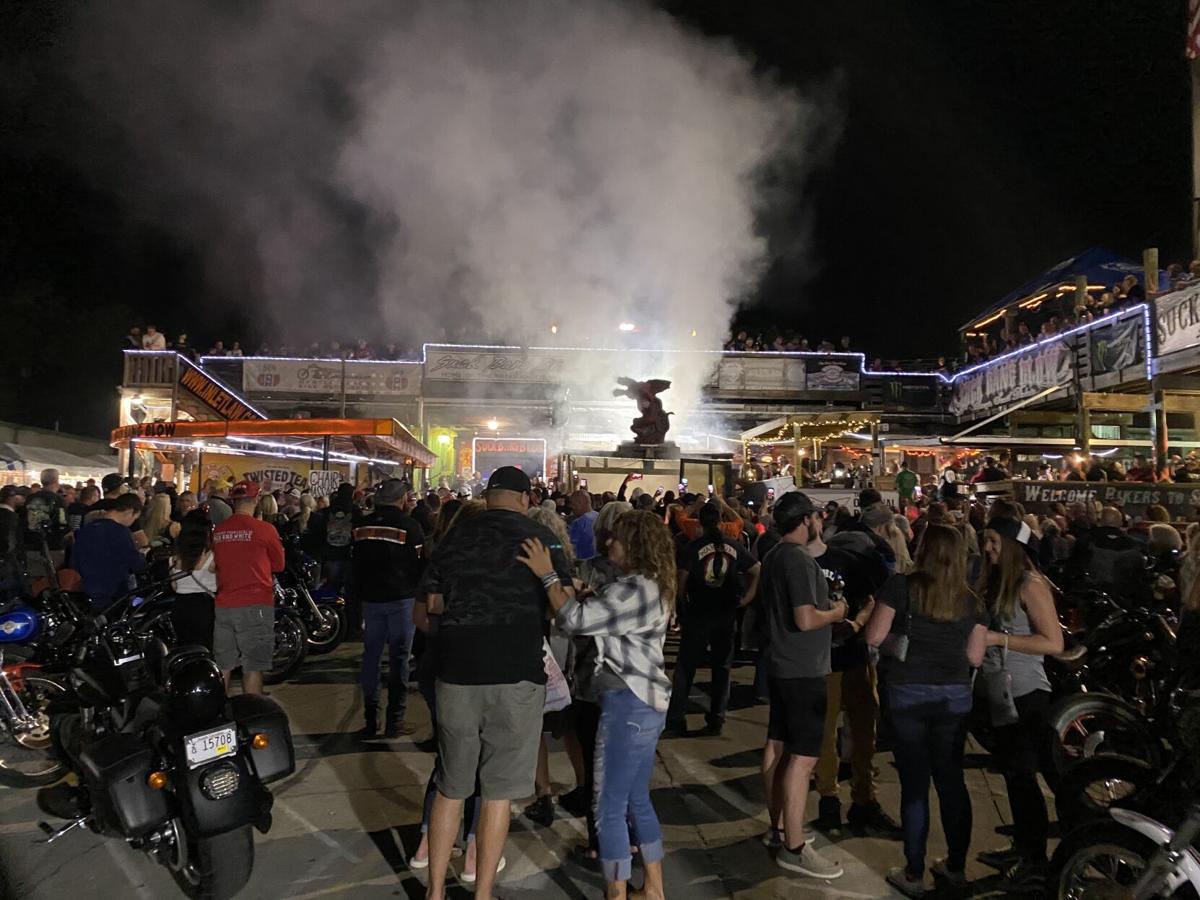 Thousands attended the fall bike rally at Suck Bang Blow on Oct. 2, 2020. The biker bar received permission to move forward with the event from the South Carolina Department of Commerce.

MURRELS INLET — Traffic was nearly at a standstill Friday night on Highway 17 Business as the sounds of loud music and motorcycle engines echoed throughout Murrells Inlet.

All cars were heading to or from SBB, a famous biker bar that sits right on the edge of the Inlet. Uber drivers were getting pick-up requests from all the way in North Myrtle Beach. Hundreds of unmasked people could be seen walking toward the bar, passing tents selling merchandise and thousands of parked motorcycles in a stretch between SBB and the Beaver Bar.

Police officers from a variety of agencies helped direct traffic and monitor crosswalks toward the bar. Still, due to limited parking, people were darting across the street even parking across Highway 17 Bypass and running across the road to reach Suck Bang Blow.

Once inside people were drinking beers, smoking cigarettes and clearly enjoying the fall weather. When a speaker on the SBB stage asked if everyone was having a good time, a roaring “hell yeah” was screamed by everyone across the bar.

While the fall bike rally began earlier in the week, Friday night marked the first big night of weekend festivities with more events planned for the remainder of the weekend.

While bars were open, the Inlet was still the biggest party in the area for the annual bike rally due to the government allowing SBB to move forward with a larger gathering of more than 250 people.

SBB Owner William Couch said attendance on Friday was comparable, if not better than, previous years rallies. He thinks the nice weather encouraged people looking for something to do to come out. All the people coming out for bike week, Couch added, is good for all local businesses.

"Bike Week in Myrtle Beach is not just a biker bar or SBB event. It affects the entire Grand Strand. It helps local businesses, gas stations and hotels," Couch said.

The large gathering at the bar comes just a few months after a summer bike rally that drew statewide attention to SBB’s operation as an event venue continuing to operate in the summer. The South Carolina Department of Revenue went as far to seek the permanent revocation of SBB’s alcohol permits, citing the bar showed a “blatant disregard for the law and for the health, safety and welfare of Horry County citizens.”

Currently, SBB has challenged DOR’s ruling and awaits a hearing. Until the hearing decides the biker bar’s future, it can continue to serve alcohol.

Despite the past event, SBB was still allowed to host an event of more than 250 people by the South Carolina Department of Commerce. Gov. Henry McMaster ordered that any event that will have more than 250 people get special exemptions from the state to continue, tasking the DOC with ensuring event plans meet the criteria laid out in the order.

“Any determination issued by the Department of Commerce shall be deemed and considered provisional and shall be subject to revision, alteration, or revocation at any point,” states McMaster’s executive order.

While the DOC originally denied the request, specifically citing an inability to require masks be worn to enter the event, changes to the public safety plans made the government feel comfortable allowing the event to continue.

Changes included having law enforcement outside to monitor conditions, cleaning crews sanitizing surfaces and guards counting the amount of people inside the facility. In addition, the executive order requires staff at these events to all wear masks. Couch said he instructed all his staff members to wear masks unless they had a religious or health exemption.

The DOC does not handle enforcement of these protocols, according to department spokesperson Alex Clark. The executive order leaves enforcement up to law enforcement agencies across the state. Horry County Police Spokesperson Mikayla Moskov said one arrest was made at the bar for disorderly conduct on Friday. No other citations and warnings were given for social distancing violations.

“Weekend crowds were apparent, but dispersed by 11 p.m. when the establishment closed,” Moskov said, adding that officers made walkthroughs of the property at their discretion and wore masks when directly interacting with the public but not while directing traffic.

While SBB is a biker bar, calling it an event venue would likely be more accurate. There is ample outdoor space on the property with a giant stage featuring live music all evening. In total the state allows SBB to have 2,945 people on three acres of property.

Couch said at its peak on Friday, about 2,000 people were on property, according to the people monitoring entrances and exits.

As hundreds of unmasked people entered and exited the SBB property, it was a challenging task to accurately keep count of how many people remained inside. The amount of people enjoying the evening made keeping at least 6 feet distance also difficult in many open outdoor areas.

One could count on their hands the amount of masks visible among the hundreds of people sipping drinks and smoking outside. In covered areas where merchandise was sold, masks were also not worn. Even fewer were wearing masks properly, with some including people having them hanging off their face or around their neck.

Most people had a drink in their hand as they walked around the property.

South Carolina has no statewide mask mandate, but SBB was still under the requirements of Horry County’s local ordinance requiring face coverings indoors and by staff members. Masks are not required to be worn outdoors while eating or drinking, however, in Horry County.

In addition, McMaster's executive order also requires masks be worn by patrons and employees at events more than 250 people unless there is a religious or health exemption, engaging in a physically demanding task, communicating with someone hard of hearing or if they are consuming food or beverages.

The South Carolina Department of Health and Environmental Control asks everyone to wear masks in public and to maintain 6 feet distance. In addition, public health experts warn that cheers and shouting can increase the odds of spreading the virus.

Attendees of any large events are encouraged to get tested for the virus. A list of available testing sites can be found on DHEC’s website.

Couch believes this week's events will not draw the same controversy as the concert over the summer where photos of the event went viral and drew condemnation from a member of the South Carolina statehouse.

And this time both Horry County and South Carolina signed off on the event moving forward. He believes his bar and employees upheld their end of the agreement with the government.

"We follow the rules. We got our proper permits from Horry County and the Department of Commerce. We are following the guidelines they gave us," Couch said. "I don't expect any negative feedback at all."