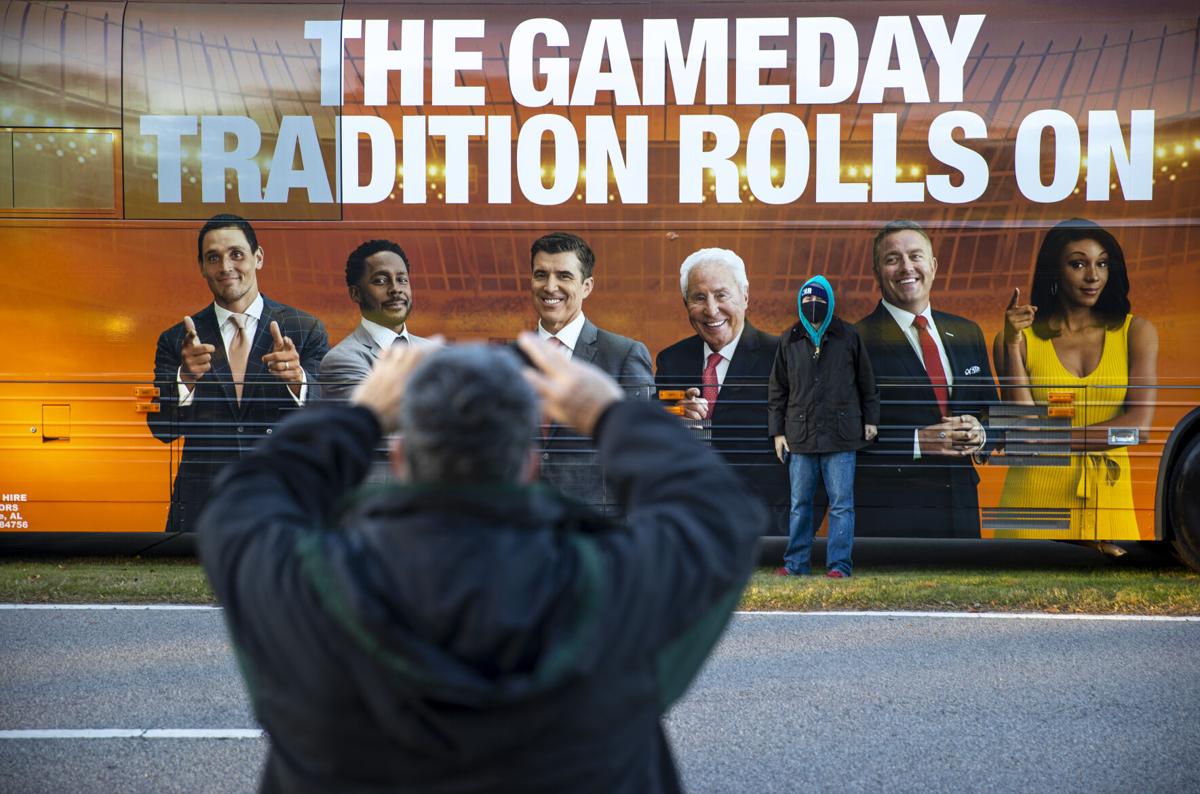 Gus Dixson takes a photo of his son Drew Dixson from Columbia in front of the Gameday bus during a game between Coastal Carolina and BYU on Saturday, Dec. 5, 2020 at Brooks Stadium in Conway. Andrew J. Whitaker/Staff 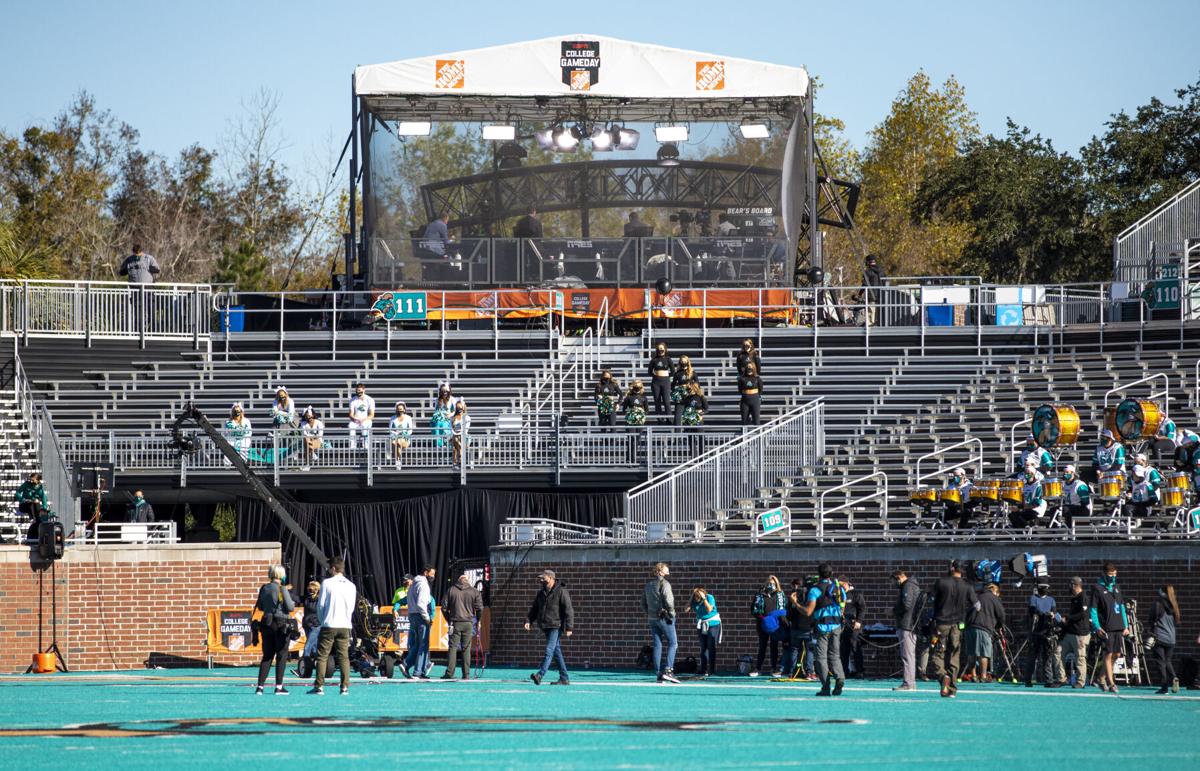 ESPN Game Day show before the game between CCU and BYU on Saturday, Dec. 5, 2020 at Brooks Stadium in Conway. Andrew J. Whitaker/Staff 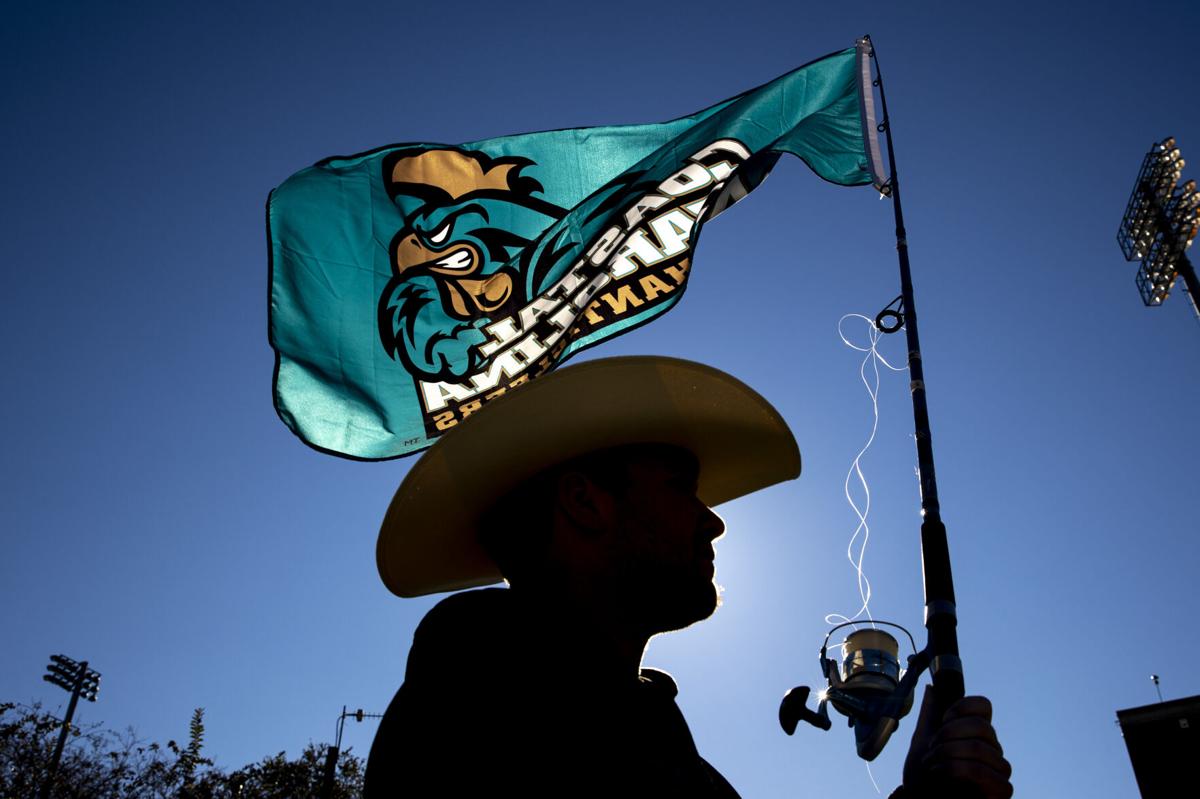 Coastal Carolina fan Hayden Bannick waves his CCU flag on a fishing pole during ESPN Game Day show before the game between CCU and BYU on Saturday, Dec. 5, 2020 in Conway. Andrew J. Whitaker/Staff 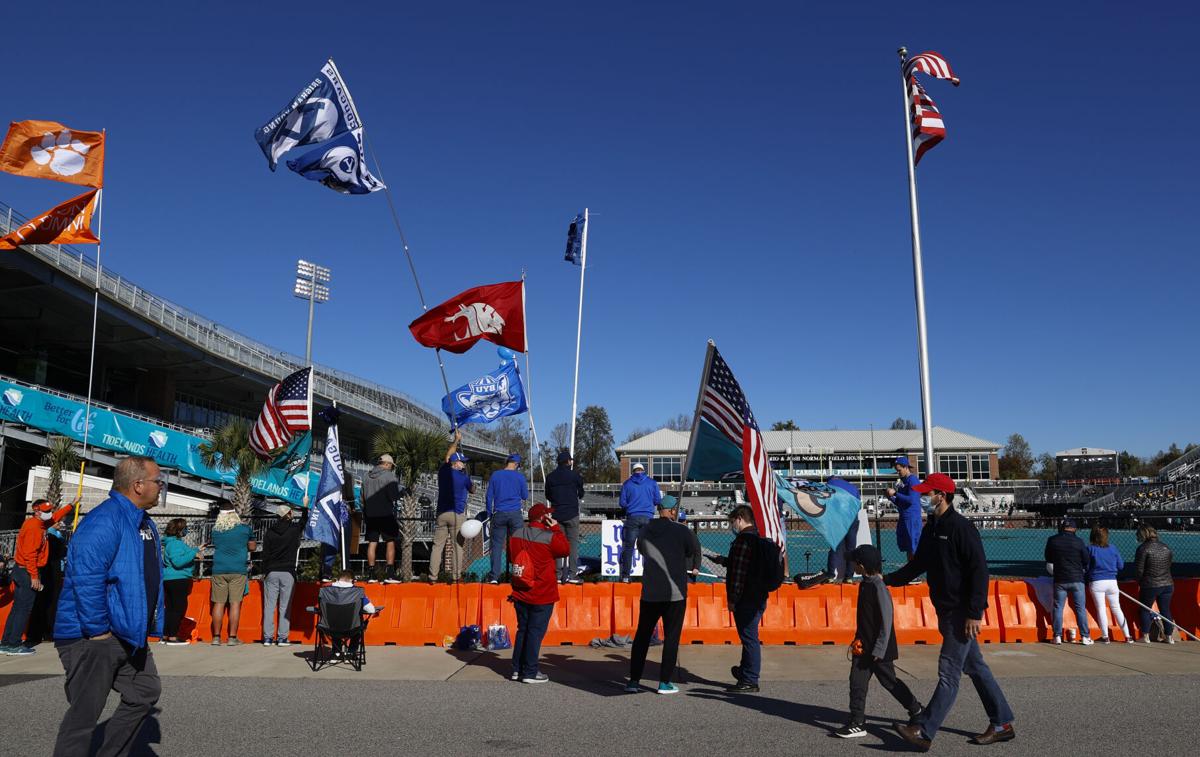 Coastal Carolina and BYU fans wait outside of Brooks Stadium during ESPN Game Day show before the game between CCU and BYU on Saturday, Dec. 5, 2020 in Conway. Andrew J. Whitaker/Staff 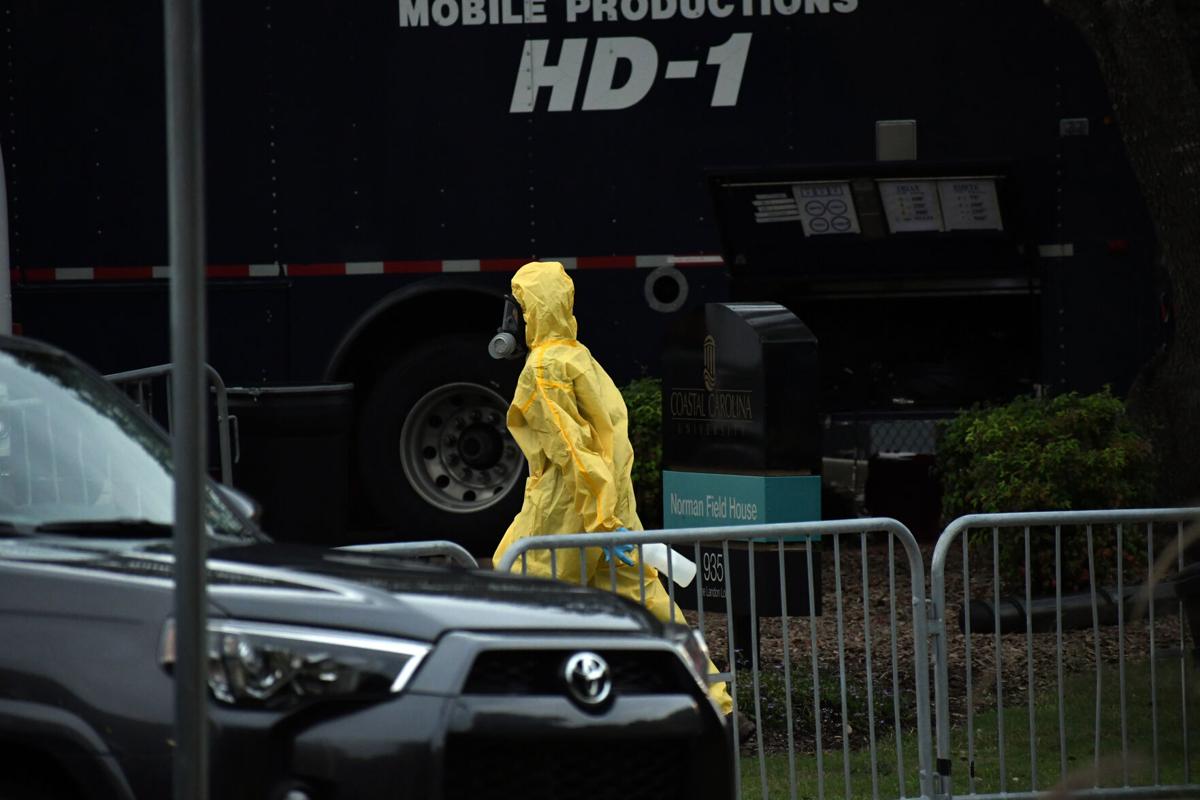 A member of the ESPN crew is in full PPE gear prior to Friday night's game featuring Coastal Carolina and Campbell.

Gus Dixson takes a photo of his son Drew Dixson from Columbia in front of the Gameday bus during a game between Coastal Carolina and BYU on Saturday, Dec. 5, 2020 at Brooks Stadium in Conway. Andrew J. Whitaker/Staff

ESPN Game Day show before the game between CCU and BYU on Saturday, Dec. 5, 2020 at Brooks Stadium in Conway. Andrew J. Whitaker/Staff

Coastal Carolina fan Hayden Bannick waves his CCU flag on a fishing pole during ESPN Game Day show before the game between CCU and BYU on Saturday, Dec. 5, 2020 in Conway. Andrew J. Whitaker/Staff

Coastal Carolina and BYU fans wait outside of Brooks Stadium during ESPN Game Day show before the game between CCU and BYU on Saturday, Dec. 5, 2020 in Conway. Andrew J. Whitaker/Staff

A member of the ESPN crew is in full PPE gear prior to Friday night's game featuring Coastal Carolina and Campbell.

MYRTLE BEACH — Local sports and tourism leaders fell just short of calling 2020 a banner year on media juggernauts like ESPN and Fox Sports 1 for the Myrtle Beach-Conway region on the eve of the state’s first college football bowl game.

“From a broadcast standpoint, yes, 2020 has been a very good year with events on the ESPN network,” said Jonathon Paris, executive director of sports tourism for Visit Myrtle Beach, an arm of the Myrtle Beach Chamber of Commerce.

“Those have included several CCU football games, the ESPN College GameDay live remote from CCU on December 5, the upcoming Myrtle Beach Bowl, which is a long-term relationship with ESPN Events, and the American Cornhole League ACL Collegiate Championships.”

A new year-round gaming experience will reward one of its top players a trip to Myrtle Beach, among other cash and prizes, as part of a new partnership Visit Myrtle Beach has with the American Youth Cooperative for Esports.

The upcoming Beach Ball Classic and the United Bank Holiday Invitational will also get some airtime, adding to the already high-exposure year for the Myrtle Beach region. The city had also planned to host the ESPN Events-owned Myrtle Beach Invitational, but it was cancelled this year due to COVID.

The three-hour College GameDay show and Coastal’s game against BYU, which has been touted as the most-viewed game on ESPNU since 2015 and the fifth-most viewed on ESPNU all time, reached nearly 10 million people and had an earned media value of $44 million on that day alone. Earned media value is a third-party monetary value of any exposure a brand receives through direct viewership or subsequent word of mouth.

Most would think all that TV exposure is big business, hence big bucks, for the namesake, but that’s not always the case.

“That one’s kind of already a determined number because the ESPN contract, like many other conferences, they have a rights contract with the Sun Belt,” CCU athletic director Matt Hogue said. “So that amount that they’ve negotiated with the league is an established number … So what happens is, just like other leagues, that rights money goes into the Sun Belt’s pot and then when they distribute their general revenue check to us each June, then they’ll calculate in the amount that each school receives from that rights deal.”

Hogue did not speculate what that number would be for this year, and officials with the Sun Belt Conference could not be reached before the time of publication.

“But it doesn’t fluctuate necessarily with how many times you’re on or not on,” Hogue said. “So even if we were not on linear or we were not on maybe ESPN or ESPN2, however you want to look at it, we would still receive a portion of that rights fee.”

The value, much like other televised sports tourism endeavors, is in the exposure.

“Obviously, the exposure is tremendous,” Hogue said. “So we understand and we try to measure what that brings us in terms of advertising you couldn’t pay for, but in terms of the share from the league, that’s going to be based on the deal that’s already been negotiated versus how many times one team or another appears in a given season.”

Coastal Carolina football has had nine of its 10 games appear on linear networks so far, with the Texas State game appearing on ESPN+. By the end of the year, CCU will have had two more games on both ESPN+ (Troy) and either ESPN or ESPN2 (Sun Belt Championship). CCU’s bowl game will be on a linear channel as well, but it is still to be determined which one.

Of CCU’s nine games on linear networks so far, all of them have been on ESPN networks except for the season opener at Kansas, which aired on Fox Sports 1.

“One of those was obviously the Fox game, too, which didn’t have anything to do with the Sun Belt’s contract,” Hogue said. “That would’ve been part of the Big 12 and Kansas’ contract. The typical dividing line is who’s playing at home, and whoever’s playing at home, that’s normally who manages and controls the TV rights; the conference of that school.”

Hogue said that football and all other sports this season have been on a minimum of ESPN+.

“Any sport that we fire up the production trailer on goes to ESPN+,” he said.

The Myrtle Beach Bowl paid Coastal Carolina University $75,000 to be able to have the game at Brooks Stadium.

Myrtle Beach Invitational will not be played in Myrtle Beach; likely $2M loss for the area

“With the bowl game specifically… we view that as a partnership that is another appendage, if you will, or another piece of the sports tourism effort that really is community-wide; it’s market-wide,” he said. “Every municipality is involved in that. There’s a lot of great connection and collaboration between all of those groups … We know we play a major role, mainly because we have facilities. But we play a major role in partnering with the community, and that’s really what that’s all about because the end goal is to drive economic impact to our area, particular drive the economic impact at this time of the year when you don’t have the traditional summertime tourism market.”

As far as games being broadcast on ESPN linear networks, Hogue hopes the university can continue to get its brand out there to draw in students and student-athletes.

“We’re also at a key time when you’re out recruiting for your general student population,” he said. “And with this being a different year where you don’t have the ability to be out recruiting in person, obviously our coaches don’t when it comes to NCAA recruiting rules right now, the same is true with the way colleges go out and recruit. They can’t go to college fairs, they can’t go to high schools. So to be able to have an opportunity to really dominate the broadcast and the virtual space, if you will, to showcase our school is critical when you’re in that prime season now of applications to college and for high school seniors deciding where they want to continue their education.

Grand Strand region could bank upwards of $18 million in direct spending from fall/winter sports tourism visitors if schedules stay on track. One MB official said he’d consider 80 percent of that a success.

“So I think it’s twofold – it obviously exposes our brand and showcases our brand like never before, which helps us get more people involved in all the various constituencies, and then secondary to that, or primary, whichever way you want to look at it, it’s putting our face out there at a time when students are deciding where they’re going to college.”

Although Myrtle Beach carries the market appeal, don’t take some of the recent sporting glory away from Conway residents.

After all, it was Conway — not Myrtle Beach — that garnered most of the attention while College GameDay aired. The show highlighted a downtown area decked out in Coastal flags and banners as far as the eye could see.

After Dec. 5, it was clear to the entire nation that Rivertown is very much a college town comparable to peer cities like Clemson or Chapel Hill, North Carolina even in a year when many students weren’t on campus.

“You know where Notre Dame is? South Bend, right? Not Indianapolis. Where is App State? Boone. Where is Penn State? Happy Valley State College,” said Conway City Manager Adam Emrick. “My point is that all of these schools are not near another city. They are in a city. Coastal is in Conway, not near Myrtle Beach. That was what we won on Saturday.”

Emrick said in an update to the city council that visitors from Greenville and Charlotte informed city tourism representatives that they traveled to Horry County earlier this month specifically to visit Conway.

Paris said cornhole will even gets its share of media when the American Cornhole League’s Collegiate Championship rolls into town from Dec. 30-Jan. 2.

Paris said Visit Myrtle Beach’s relationship with ESPN and ESPN Events began with the relocated Puerto Rico Invitational in 2017, and has grown to add tremendous value to the area.

“ESPN Events has been a tremendous partner to our destination and we are very pleased with the exposure our area is receiving through these events,” he said. “The tourism benefits to the community during our traditionally slower shoulder season is as important as the national exposure the destination receives for these events on the ESPN networks.”