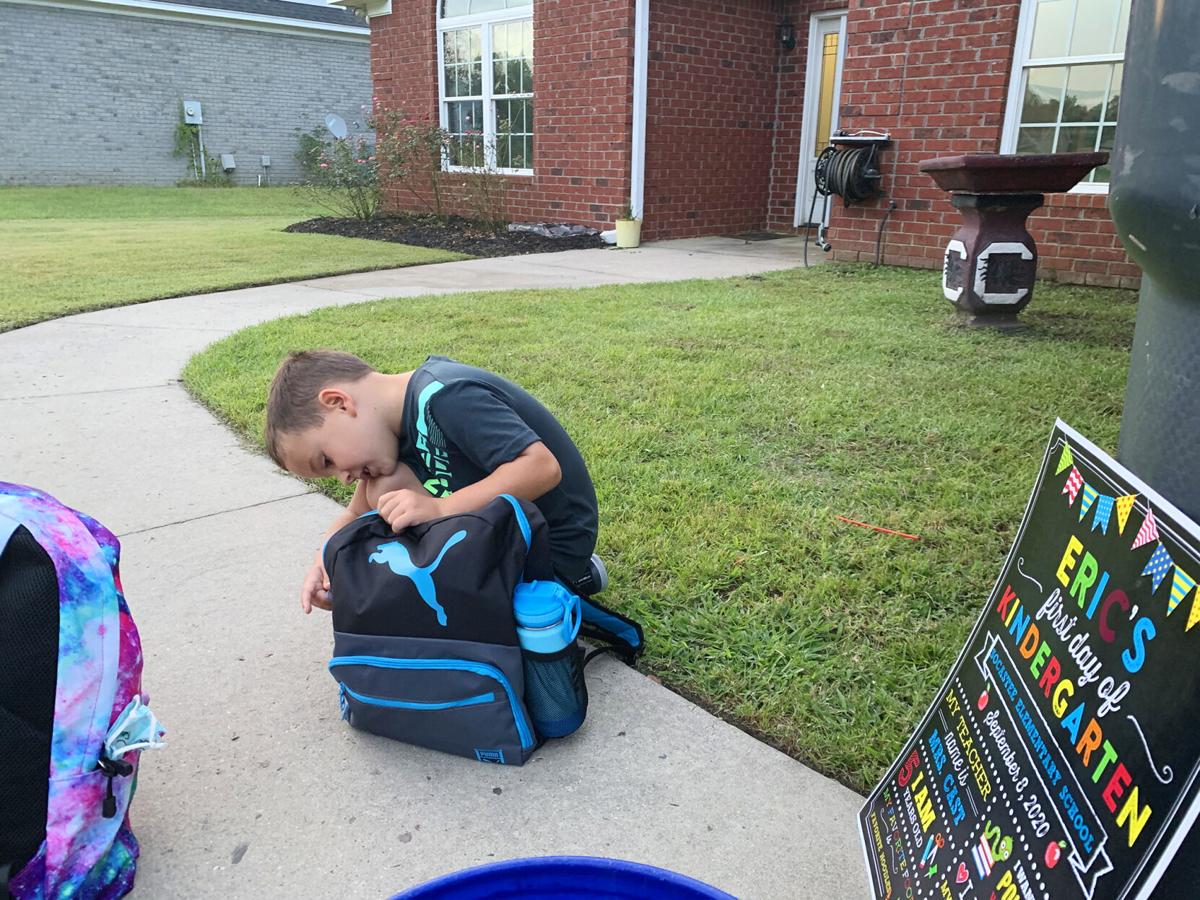 Eric Ballard Jr. looks through his backpack in search of his mask — something his sister Haizley found a short distance away inside the Ballard family home. It was Eric's first day of Kindergarten on Tuesday at Socastee Elementary School. 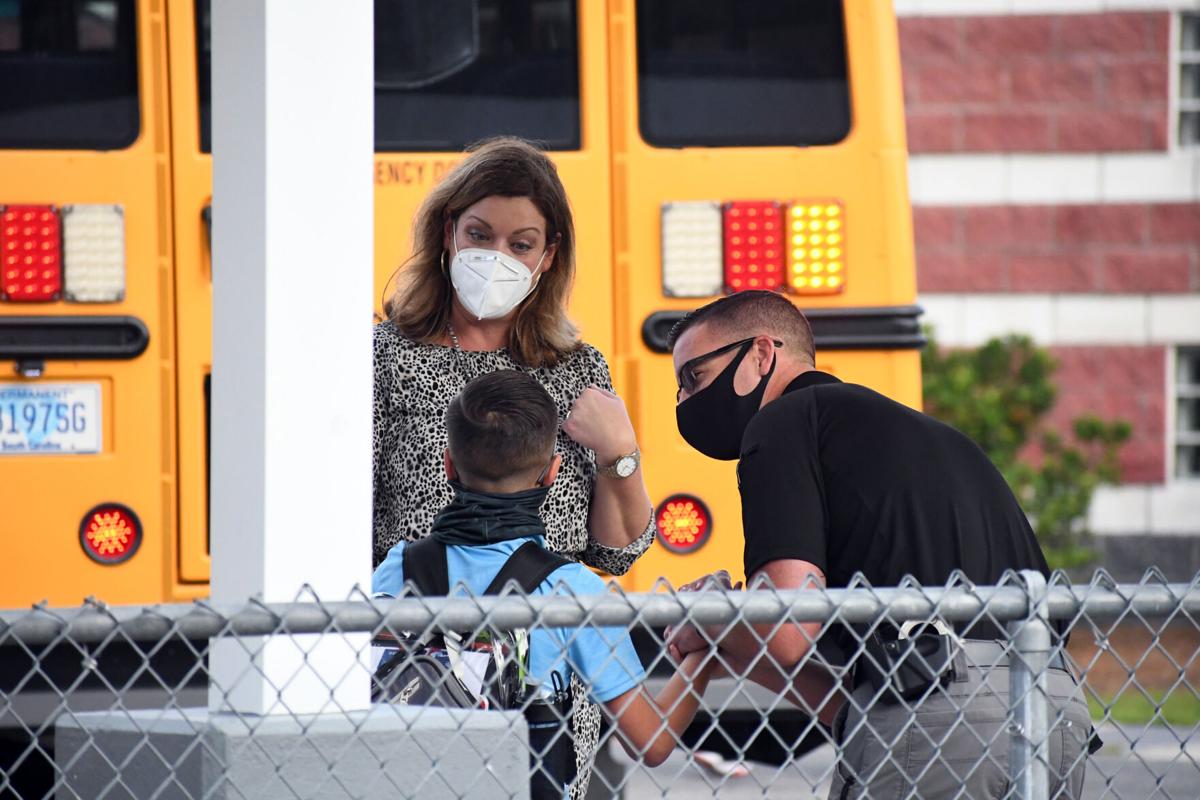 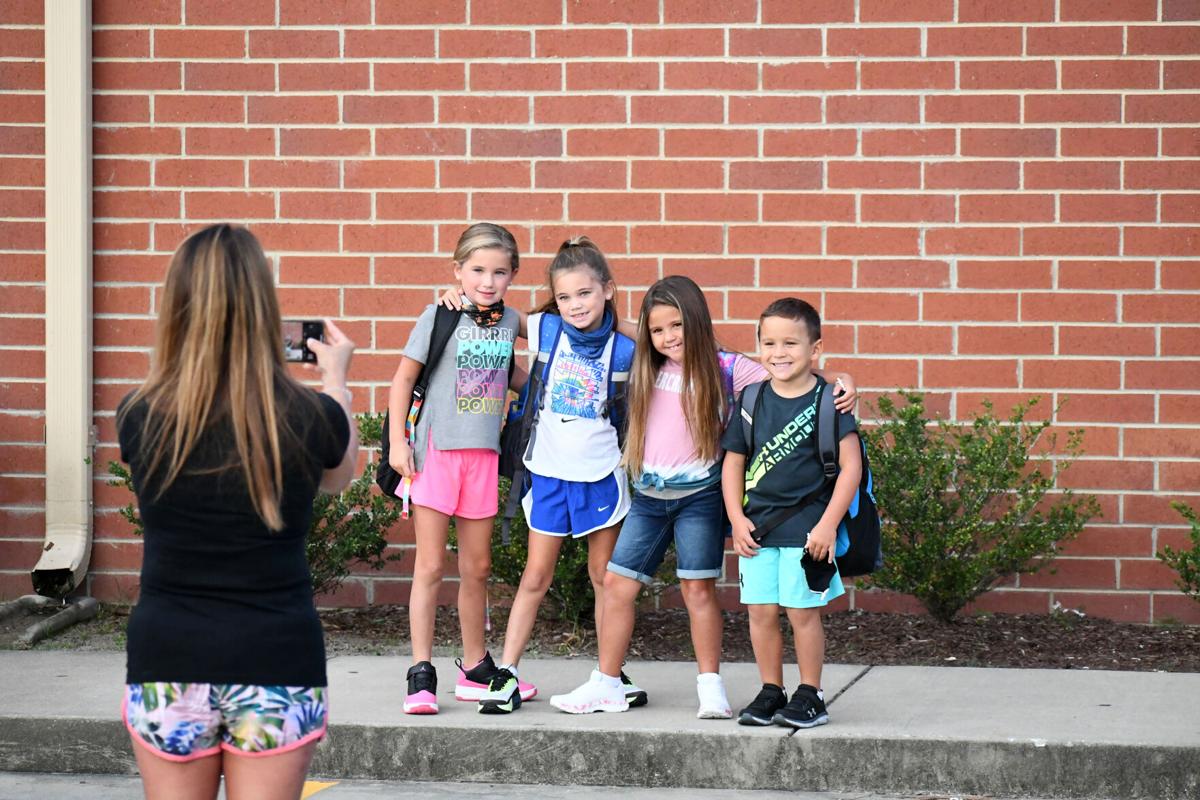 Becky Ballard takes a first-day-of-school portrait of her two children, Haizley and Eric Jr. (both at right), and family friends, Brinley & Allie Shepheard. The two families met at the Family Dollar just across the street from Socastee Elementary. 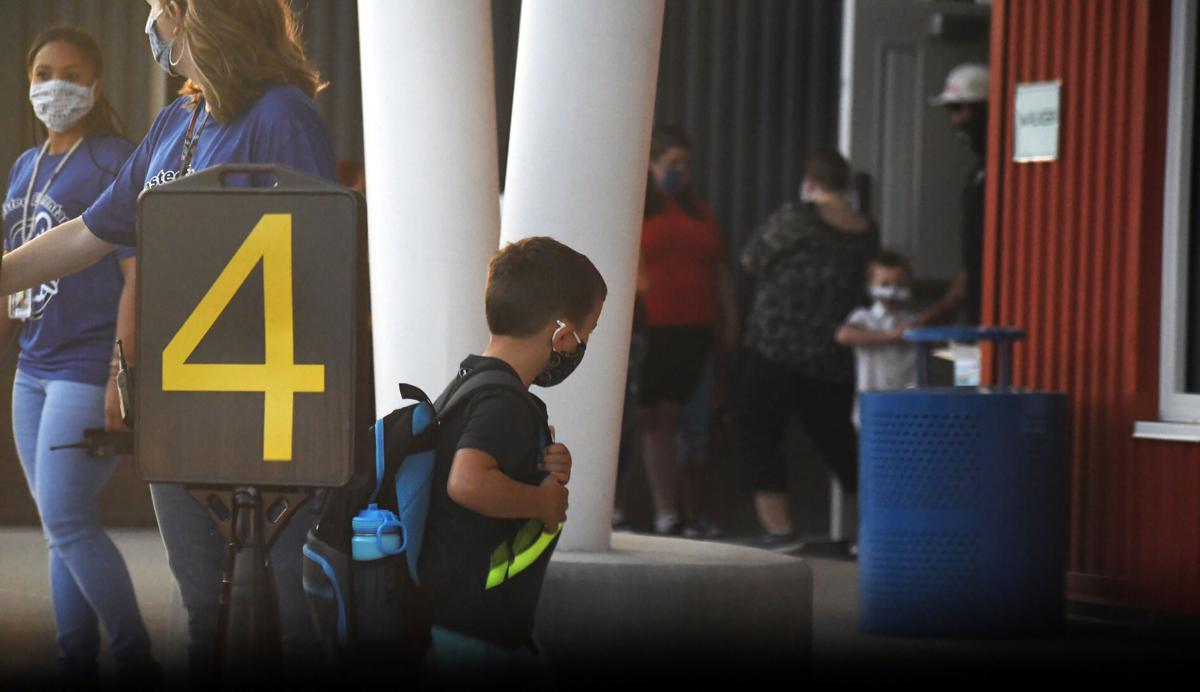 Eric Ballard Jr. takes his first steps onto the campus of Socastee Elementary School as a Kindergartner, with his sister escorting him inside the school due to coronavirus-related restrictions with visitors on campus. 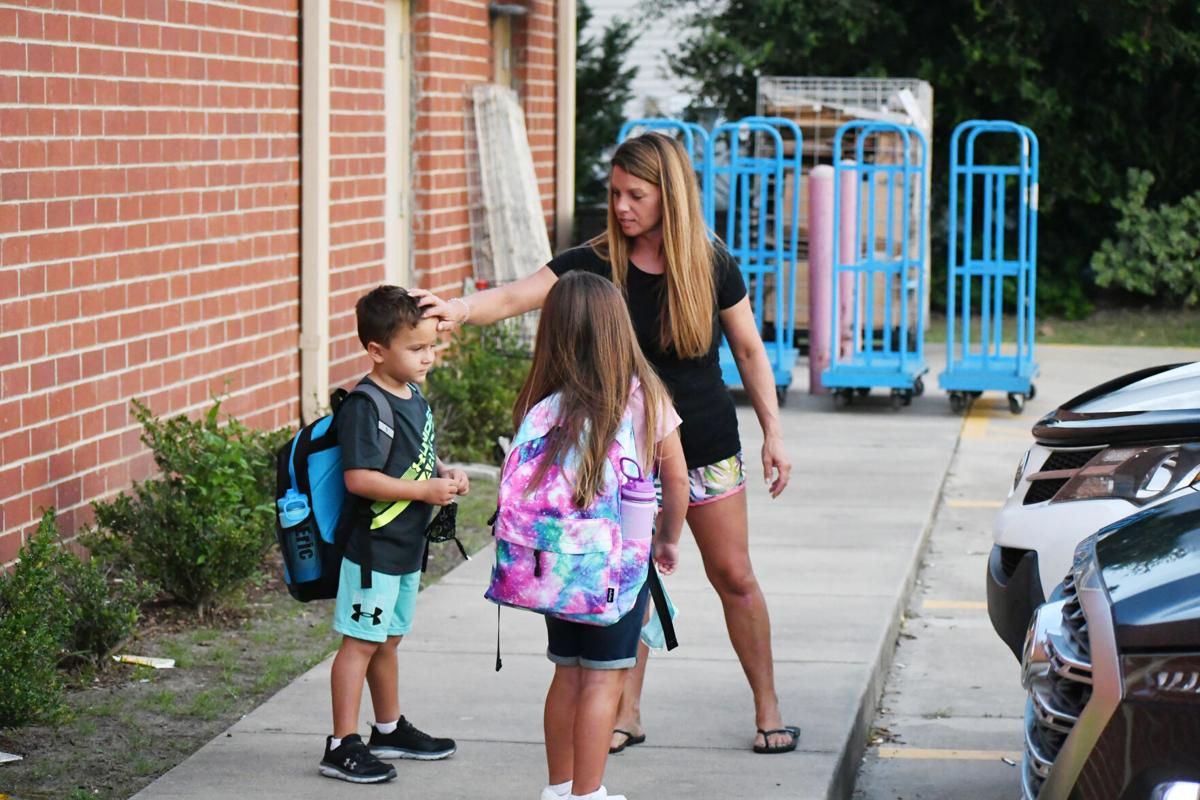 Becky Ballard brushes away a few hairs from Eric Jr.'s forehead as they await family friends at the Family Dollar. 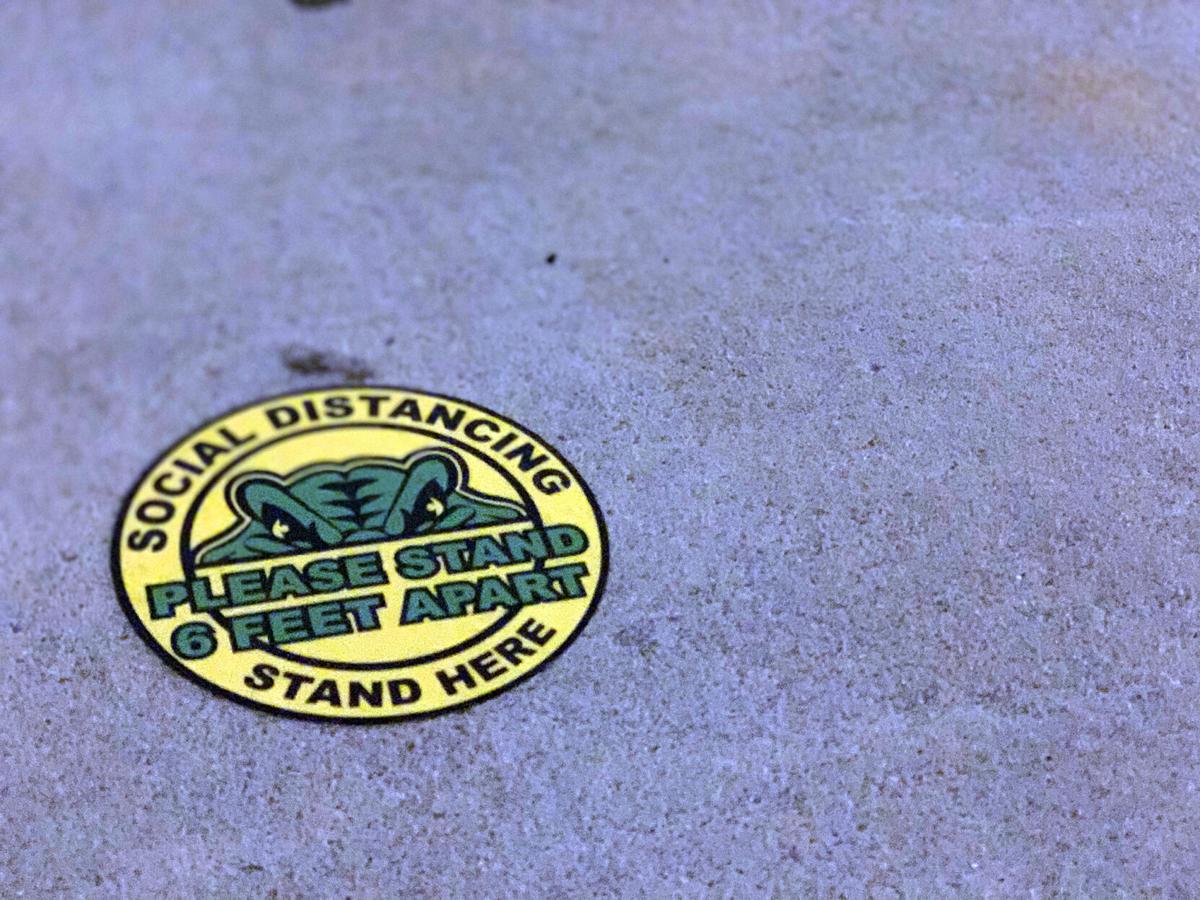 Markers – complete with Forestbrook Middle School's gator mascot — that remind students and faculty of social distancing can be found both inside and outside of the school. 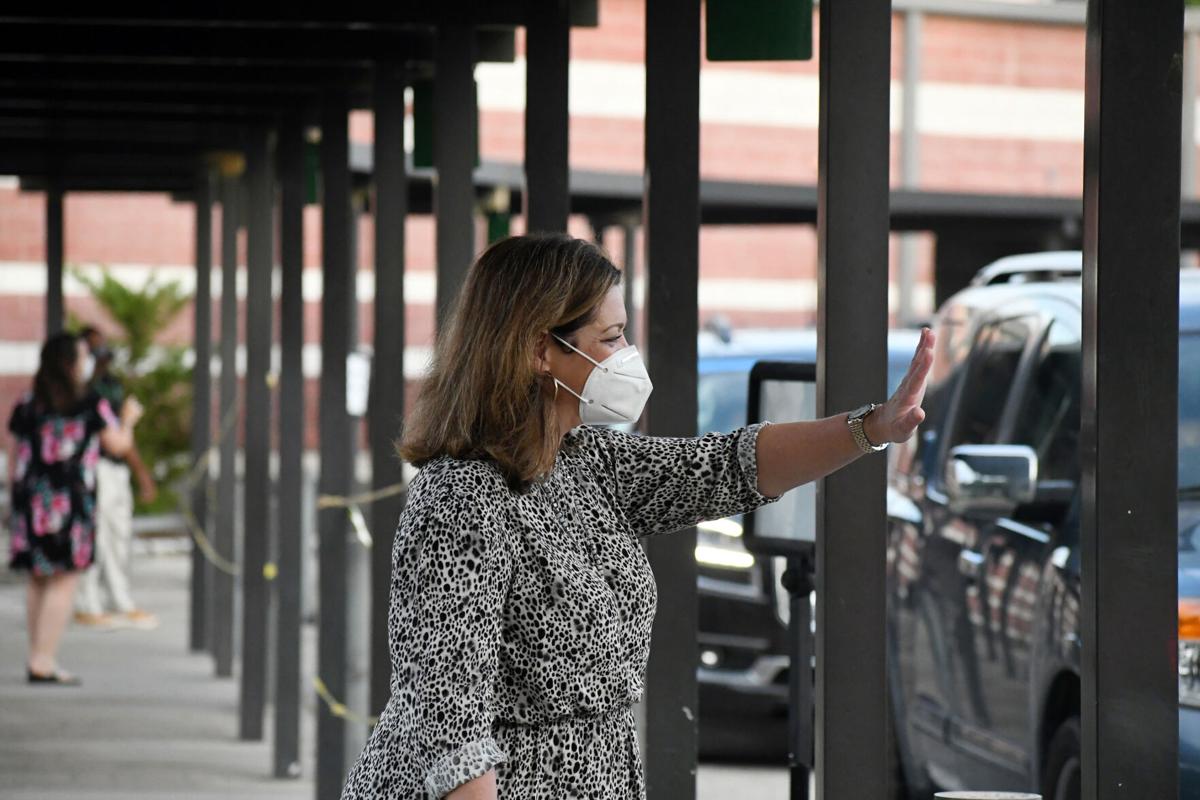 Melissa Rutenberg, principal of Forestbrook Middle School, greets students in the car-rider line, where they were dropped off methodically, including reminders if a student wasn't wearing a mask. 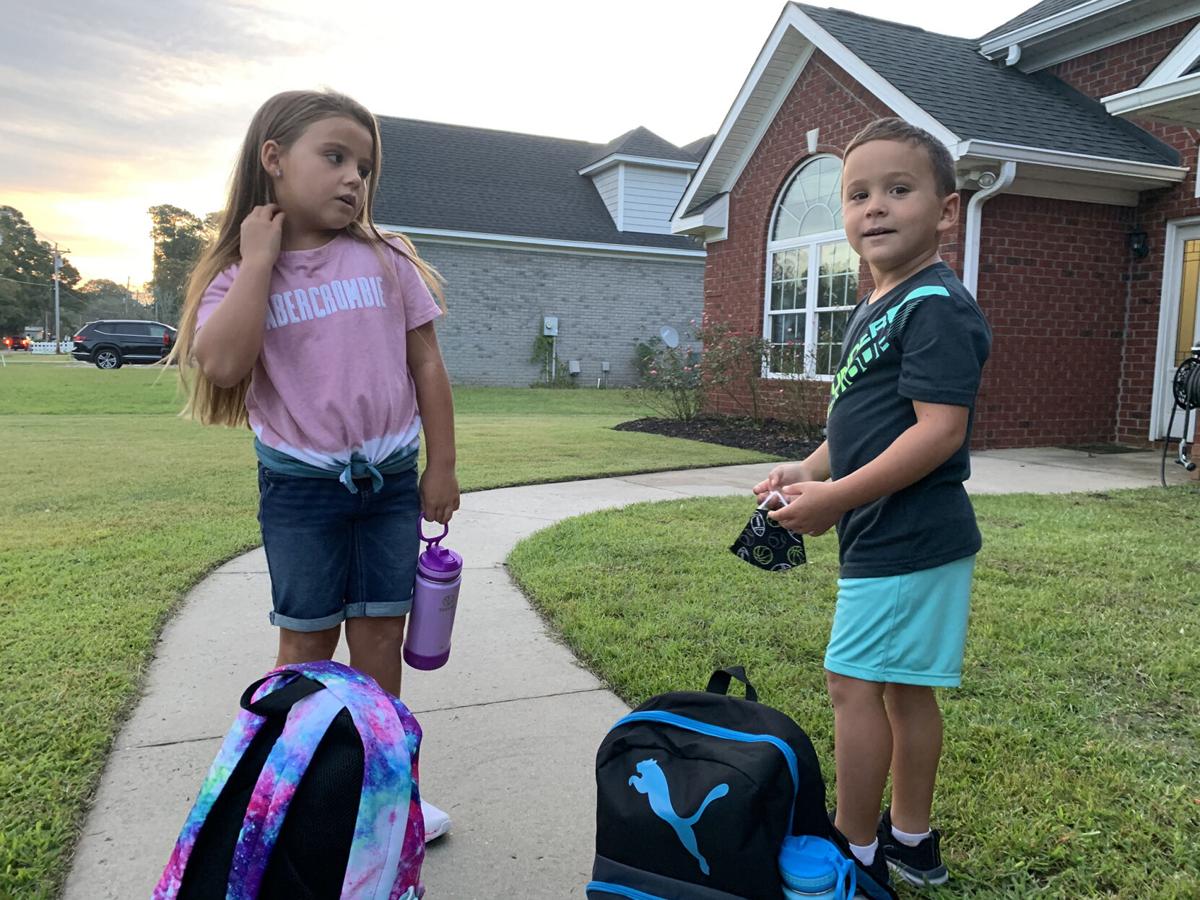 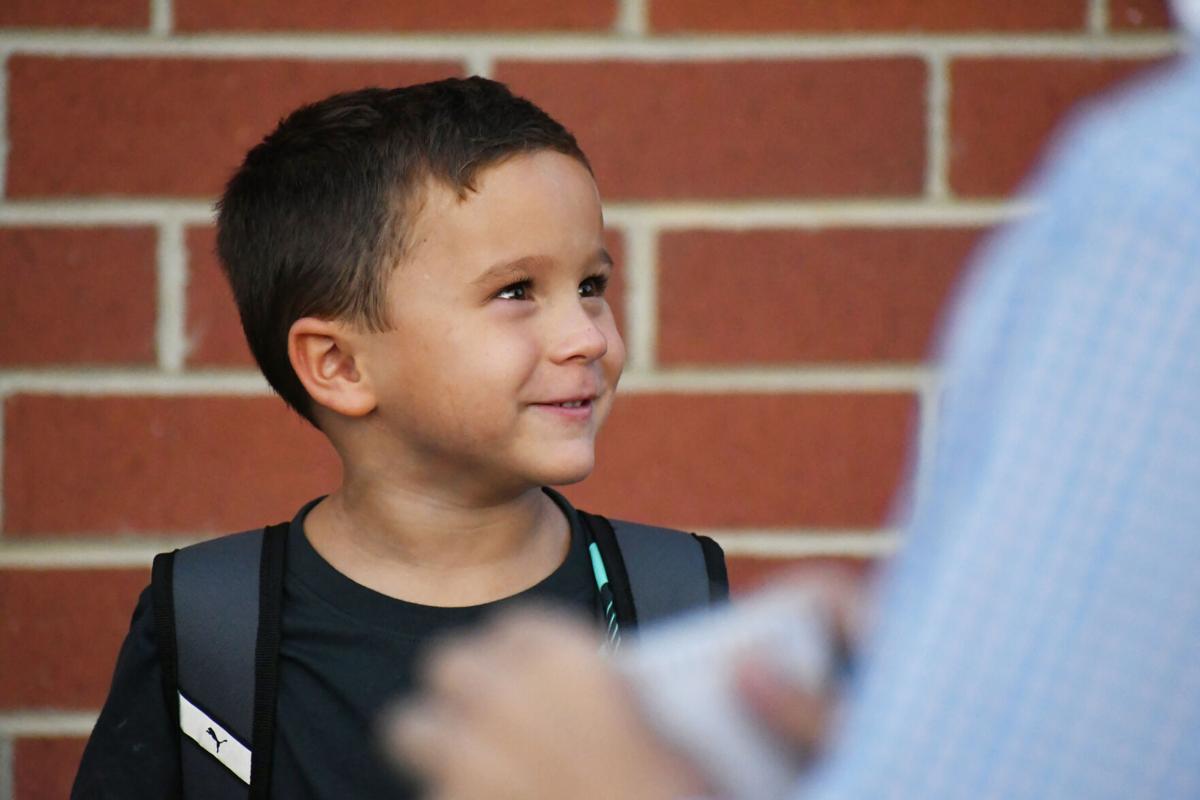 Eric Ballard Jr. is all smiles as he waits for family friends at Family Dollar, just moments before heading to his first day of Kindergarten at Socastee Elementary School on Sept. 8, 2020. 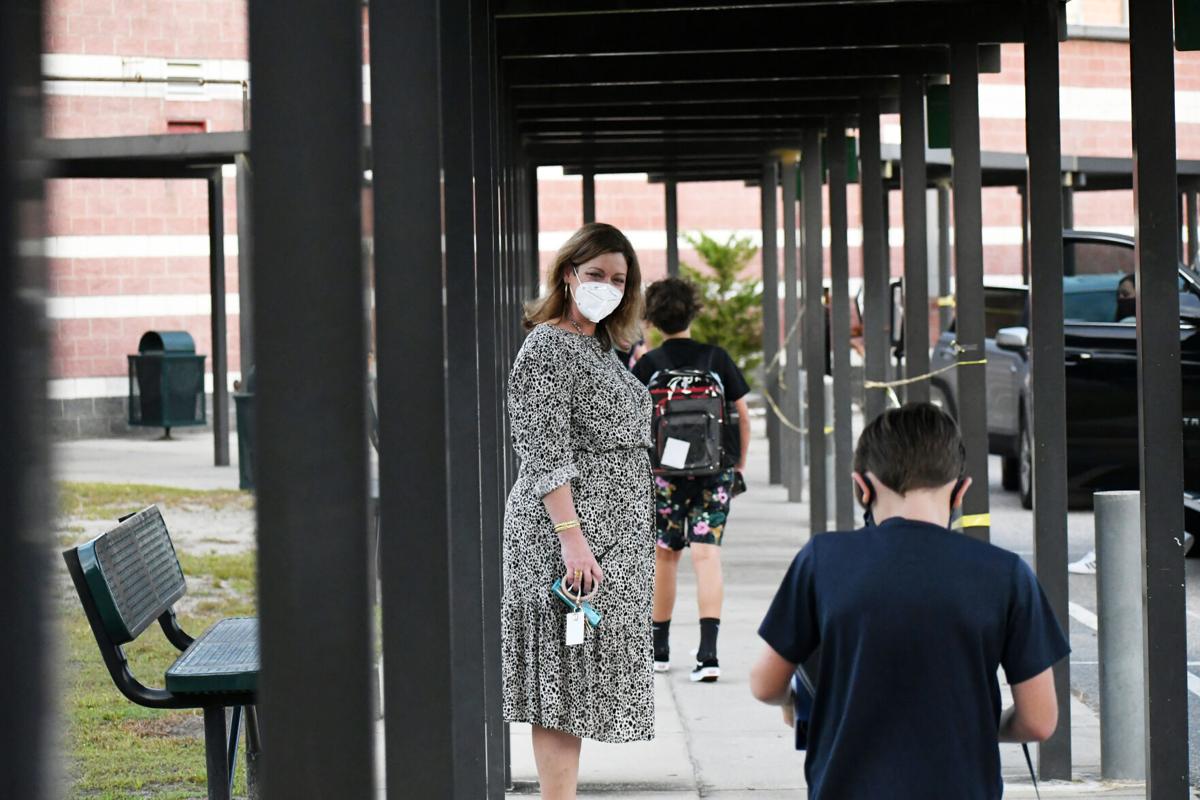 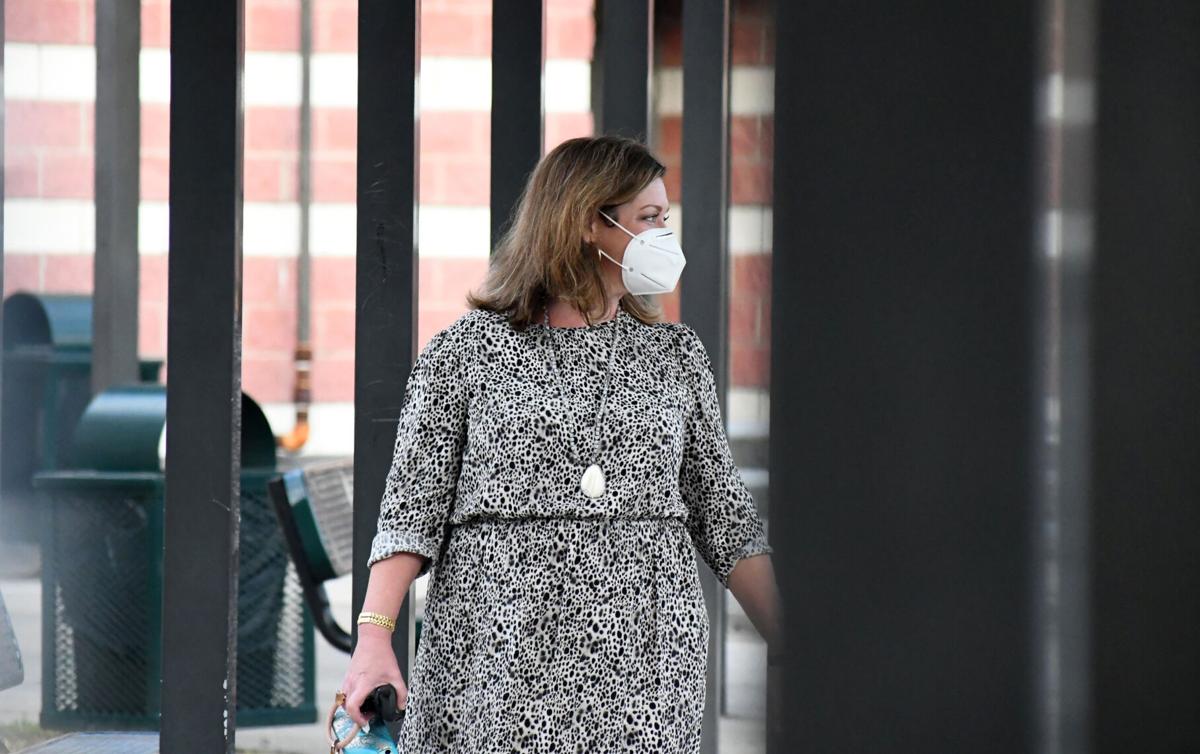 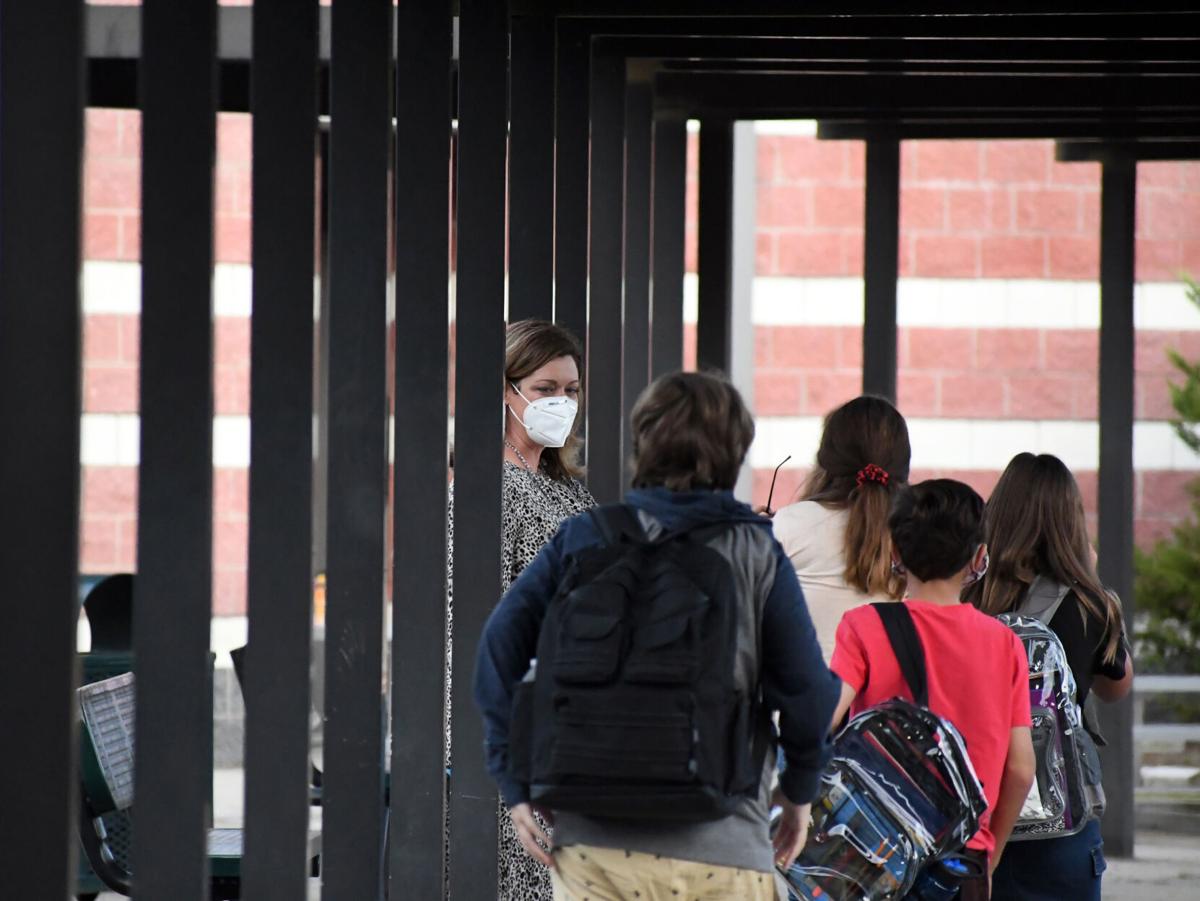 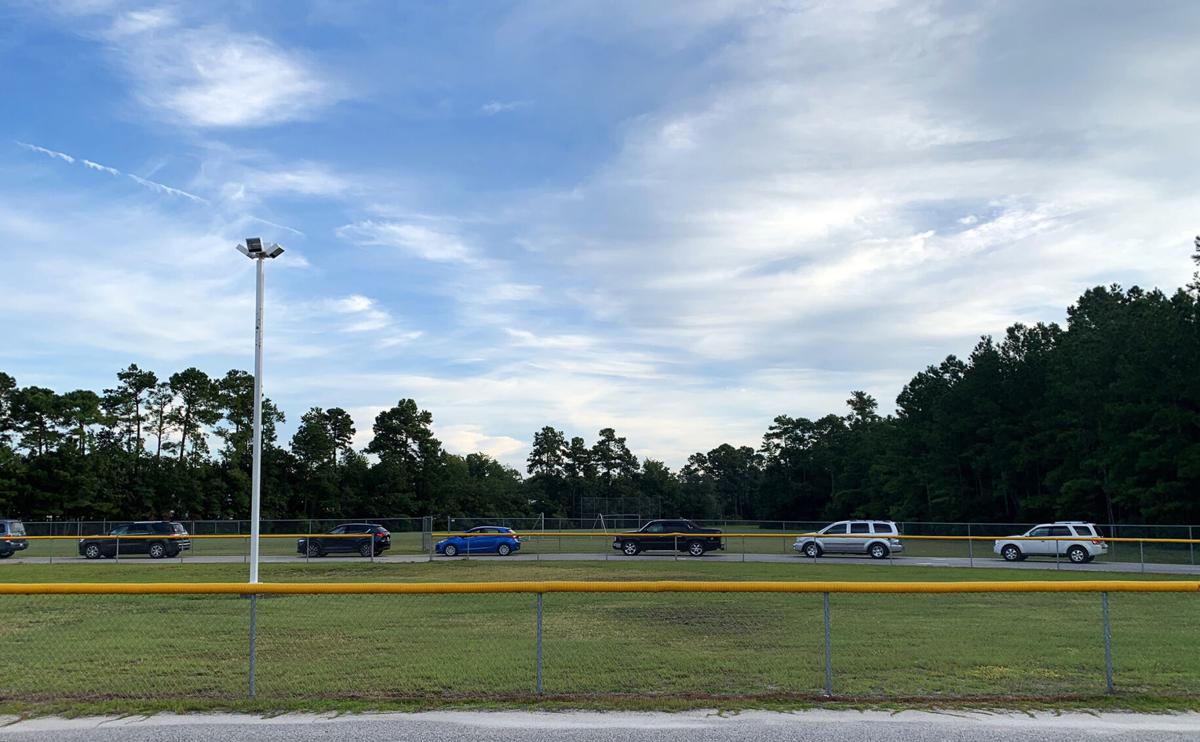 The car line at Forestbrook Middle School wrapped around the entire campus on Sept. 8, 2020.

Eric Ballard Jr. looks through his backpack in search of his mask — something his sister Haizley found a short distance away inside the Ballard family home. It was Eric's first day of Kindergarten on Tuesday at Socastee Elementary School.

Eric Ballard Jr. takes his first steps onto the campus of Socastee Elementary School as a Kindergartner, with his sister escorting him inside the school due to coronavirus-related restrictions with visitors on campus.

Eric Ballard Jr. is all smiles as he waits for family friends at Family Dollar, just moments before heading to his first day of Kindergarten at Socastee Elementary School on Sept. 8, 2020.

The car line at Forestbrook Middle School wrapped around the entire campus on Sept. 8, 2020.

MYRTLE BEACH — Five-year-old Eric Ballard Jr. squatted next to his Puma book bag Tuesday in front of his parents’ beautiful brick home in the Socastee community of Myrtle Beach as he dug elbow-deep, searching from pocket to pocket.

“What are you looking for?” asked his 7-year-old sister Haizley.

“My mask!” Eric exclaimed, showing a bit of restlessness for his first day of kindergarten at Socastee Elementary.

“She meant over here,” Haizley said as she walked toward the front door of their home. Haizley was referring to what their mom, Becky, had already told Eric — that his mask was at the front door.

“Got it, brother!” Haizley shouted as she ran toward Eric with his black-and-white sports mask in hand.

“Where was it?” Eric asked, as he looked up from his bag, his hair parted perfectly and a freshly missing tooth he lost from the night before.

“At the front door,” Haizley said matter of factly.

It’s that organized and, at times, protective older-sister mentality that put Becky and her husband, Eric Sr., at ease sending their children off to school on Tuesday morning, ending a six-month, coronavirus-induced hiatus for students across Horry County.

However, it was the nostalgic act of walking Eric into his kindergarten class for his first official day of school that caused the youngster to have a mini-breakdown on the ride to school and mom to be heartbroken.

“There are so many little things that, as a parent, I don’t get with him,” Becky said. “We didn’t get to meet his teacher together. Me, Eric and Eric all walked Haizley in. I have videos of her walking to her classroom, setting her stuff up in her desk. Those are just things with him that aren’t going to be there.

Neither Eric Sr. or Becky, or any parent for that matter, were able to walk their children into school because of the district’s drop-off policy that required parents who drove their kids to school to let them out curbside.

Staff members with protective masks at Socastee Elementary opened the doors of cars formed in a single-file line Tuesday welcomed the kids and pointed them to the entrance.

In a way, the Ballards got lucky.

Eric Jr. has the same kindergarten teacher as Haizley did when she was in kindergarten. In fact, instead of Eric Jr. simply putting on a sticker that states his teacher Ms. Cast’s name, Haizley was able to walk him in — like a protective older sister.

“If it wasn’t for Haizley, how did I know my child made it to his classroom?” Becky asked rhetorically. “He has never been in there to see where his classroom is and you just want me to put my baby on the sidewalk and hope that he made it his classroom?”

Becky said she has been trying to see it from both the school’s side and her side, but her “heart is just in the mommy mode.”

“As difficult as it is for the parents, I think that it possibly could be even more difficult for the teachers and the administrators that are having to go through this,” she said. “At the end of the day, they’re there because they love children. They’re definitely not there for their paycheck. I think that if they could have figured out a way for it to happen, I feel like they would have.

“I think that they’re trying to do what is best and what is the right thing. I go back and forth between (being) the parent, and being angry and frustrated; to they’re not doing this on purpose. This is just how it has to be right now.”

In a search for a way to calm everyone’s nerves on Monday night, Becky dug through their pile of children’s books and found “Look Out Kindergarten, Here I Come.”

It was a gift Ms. Cast gave to Haizley on her first day of school two years ago and Becky read it to Eric, and of course Haizley.

With the early wake-up call Tuesday, Becky offered Haizley a last-minute reminder as her older sister duties now include being there for the first day of school.

“Make sure he’s there in the car rider line,” she tells Haizley.

Melissa Rutenberg, serving in her third year as principal of Forestbrook Middle School, couldn’t sleep on Monday night out of anticipation of leading a team of teachers and staff through a historic first day of school for Horry County.

The day her and her staff had planned for months finally arrived — with Rutenberg starting to greet teachers as early as 6:45 a.m.

Was Rutenberg worried about the first day of a hybrid model education system during a pandemic?

“That ‘w’ word is not in my vocabulary,” Rutenberg said. “We are concerned for their safety and that everything goes smoothly. We have done a ton of communication on the front end of students attending our school.”

Forestbrook Middle School’s theme this year is “choosing calm over chaos” — with Rutenberg explaining that the motto is just as much for the school’s staff as it is for the kids.

“It’s our job to help the kids stay calm and if we are chaotic we can’t do that. So the adults have to remember that our role is to help students at all times,” Rutenberg said. “It’s calm over chaos. We are choosing that. It’s a daily choice.”

Car rider students began arriving shortly after 7 a.m., but had to wait in their cars until teachers could formally and safely welcome them into class. First the car riders were dropped off, and a security guard kindly reminded students to put their masks on before heading inside.

Then nearly empty buses arrived dropping off handfuls of waving students at a time. Teachers helped keep students separated and reminded them to wear a mask.

The first day of class will be more informational than educational, making sure students understand why these social distancing rules are necessary. Rutenberg said new students will get a tour, meet all their teachers and learn what is expected of them this year.

Roughly 250 students are expected to be in each Group A and Group B, with the former getting the in-person head start on Tuesday, while Group B will report on Wednesday.

Hannah Sweat, a math teacher at Forestbrook Middle School, had been preparing throughout the summer to welcome students back into the classroom.

“I’ve definitely worked no less than four to five hours a week even during the summer since there are so many unknowns,” Sweat said. “I wanted to make sure I was prepared for basically every outcome and I think that is the same for every teacher in the building.”

While Sweat is nervous about balancing the hybrid model, with different students coming every other day, she hopes her students take advantage of the digital side of teaching. It’s her plan to use all the resources available to make this year worthwhile for her math students.

Typically on the first day, Sweat has her students make goal-setting pennants as a way to get to know the incoming students. This year, the pennants will be made virtually and students will color them in using their computers.

“I normally let them hang them on the wall and let them color. This year they will color digitally,” Sweat said.

“I think they may be more apt to tell the truth when no one else is seeing it.”