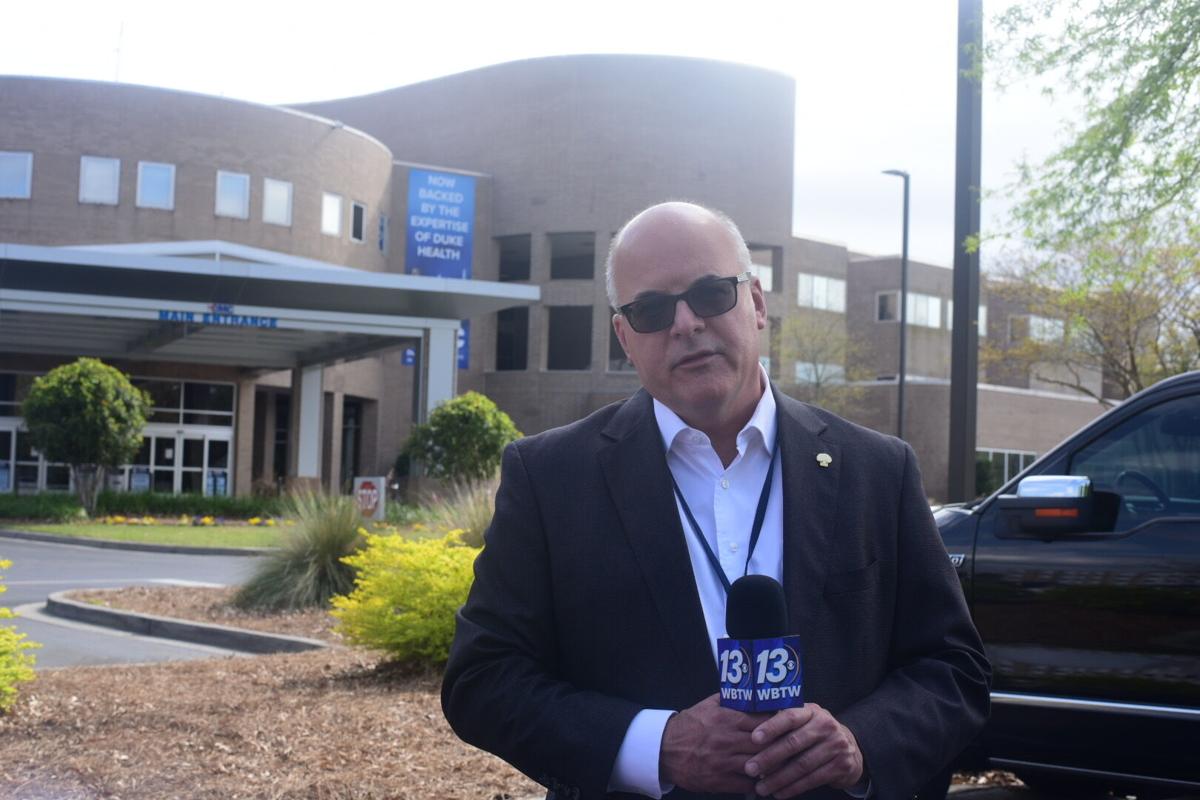 CONWAY — CMC Carolina Forest is one step closer to fruition after Conway Medical Center announced on March 30 that it has received approval to move 50 hospital beds from their Conway headquarters to a proposed Carolina Forest facility.

The South Carolina Department of Health and Environmental Control approved a "Transfer of Need," which allows CMC to transfer the medical beds, putting it one step closer to its plan to create a medical facility in Carolina Forest.

South Carolina is a part of the Certification of Need program which regulates health care facilities capacity to control health care costs and access to care, according to the National Conference of State Legislatures website.

The beds at Conway's main facility are under-utilized, according to CMC, leaving its Conway facility with 160 hospital beds.

“This is a major win for the Carolina Forest community. We are thrilled DHEC recognizes the importance of what Conway Medical Center will bring to this area in a facility that will be unlike any other in the state," said Bret Barr, CMC president and CEO.

"As the first hospital in Horry County, there is no better healthcare system to provide the services so desperately needed in this growing area. This decision allows CMC to provide a total healthcare solution that will create happier healthier lives for the people of Carolina Forest and beyond.”

Carolina Forest is one of the areas in Horry County that has seen the most growth, according to the Imagine 2040 project.

The hospital will create more than 250 jobs, according to CMC.

With that rapid growth, CMC officials clarified that while the Certification of Need approved by DHEC is for the 50 hospital beds, the master plan for the CMC Carolina Forest have the possibility to allow for an additional tower for beds and office spaces.

Barr said a possible expansion of the facility would be an additional step and would be something later down the road.

Along with the 50 hospital beds, the location will include eight labor and delivery rooms, two C-section rooms, six ICU beds, three operating rooms and a six-bay infusion center.

The $160 million project will take three years to construct once it breaks ground.

Barr was not able to give an exact date of when construction could began due to conversations that are still happening with Horry County Council.

CMC will need to rezone a nearly 360-acre property on International Drive from General Residential to Inpatient Medical Services to allow the hospital to be built on the property, The Post and Courier reported in January.

Horry County Planning Commission approved the rezoning 6-2 in January, sending it to County Council for consideration.

Councilman Johnny Vaught, who was specially appointed to the project, said conversations surrounding the project are close to being finalized and they have a development agreement in the works.

With the agreement they plan to address concerns from the South Carolina Department of Natural Resources and to transfer some of property that CMC cannot use to the county to be used for wildlife protection.

Horry County owns 3,750 acres next to the proposed CMC location to assure the area will not be developed.

Vaught added that the county plans to eventually hand the land over for wildlife use.

"The DHEC approval was part of the puzzle that needed to come in before we could even complete the rest of it," Vaught said. "Because if DHEC was not going to allow them to build the hospital there, then it was a moot point as to whether or not we rezone that property. 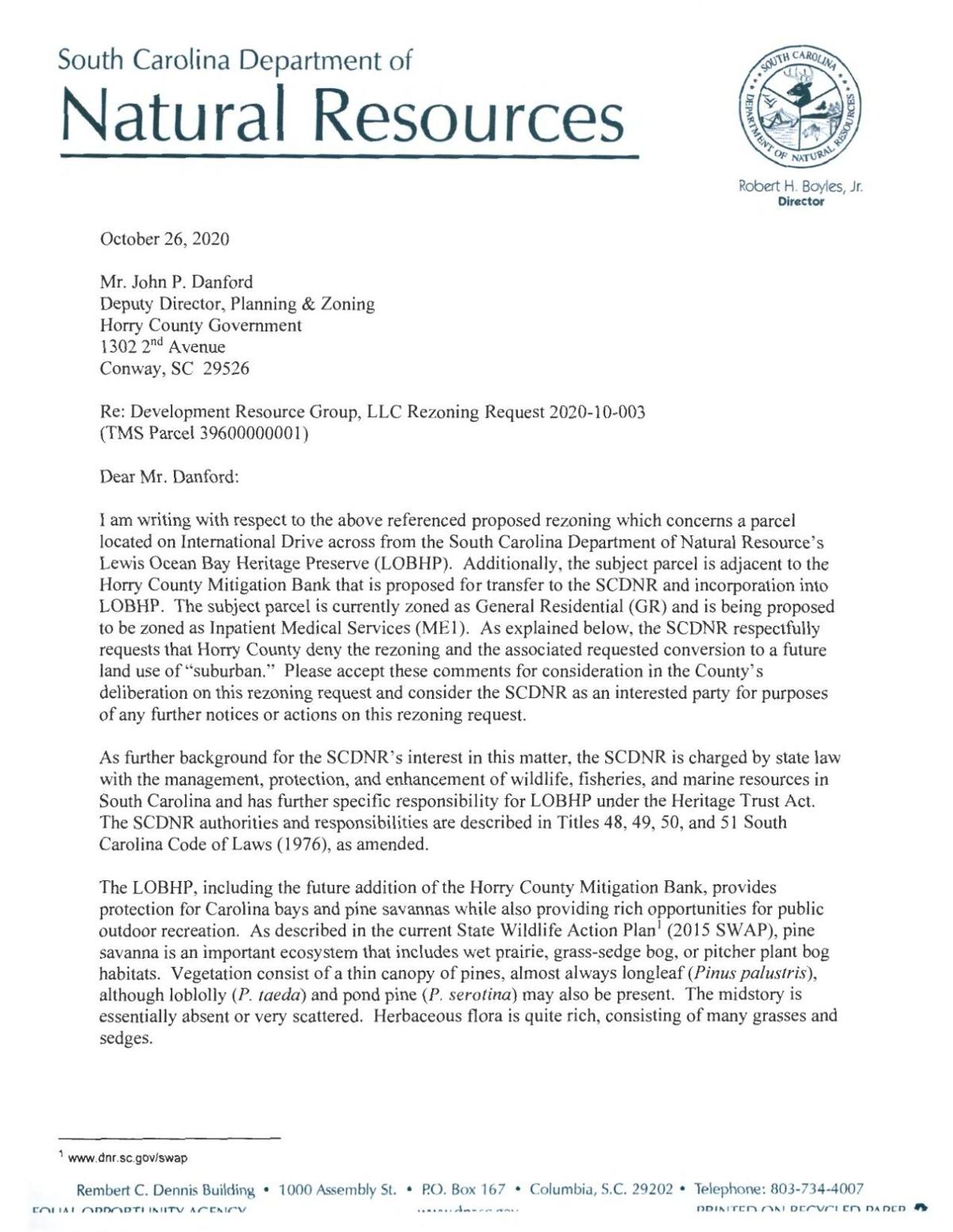 DNR does not approve of the project and asked Horry County to deny the project for rezoning in an Oct. 26, 2020, letter.

With the Lewis Ocean Bay Heritage Preserve adjacent to the proposed CMC facility, DNR is concerned about its need to do prescribed burns to decrease the chance of uncontrolled wildfires.

"Consequently, the species that inhabit these unique habitats depend on the DNR's past and continued use of prescribed fire as a safe tool for managing this landscape," Robert Boyles, director of the DNR, said in the letter.

When asked if its position has changed since then, DNR spokesman David Lucas said it hasn't.

"While I understand and appreciate the need for medical facilities to meet the needs of a community, such a facility has other options, but there is only one Lewis Ocean Bay Heritage Preserve," said Boyles.

Since the beginning of its proposal, Barr said CMC shifted the location of the hospital on the property to the center to mitigate concerns from residents regarding noise, traffic and lighting.

When asked how CMC plans to address DNR's concerns, Barr said they have been in contact with county officials and DNR, coming up with a good solution that he believes resolves the concerns.

Barr went onto explain the hospital plans to have a fire barrier to surround the entire location to proved an extra layer of protection against the prescribed burns DNR does in the area. He added that CMC has also copied infiltration systems from hospitals in California's to alleviate smoke concerns.

"We feel like our engineers and architects have done an excellent job at taking all of those things into account," Barr said.