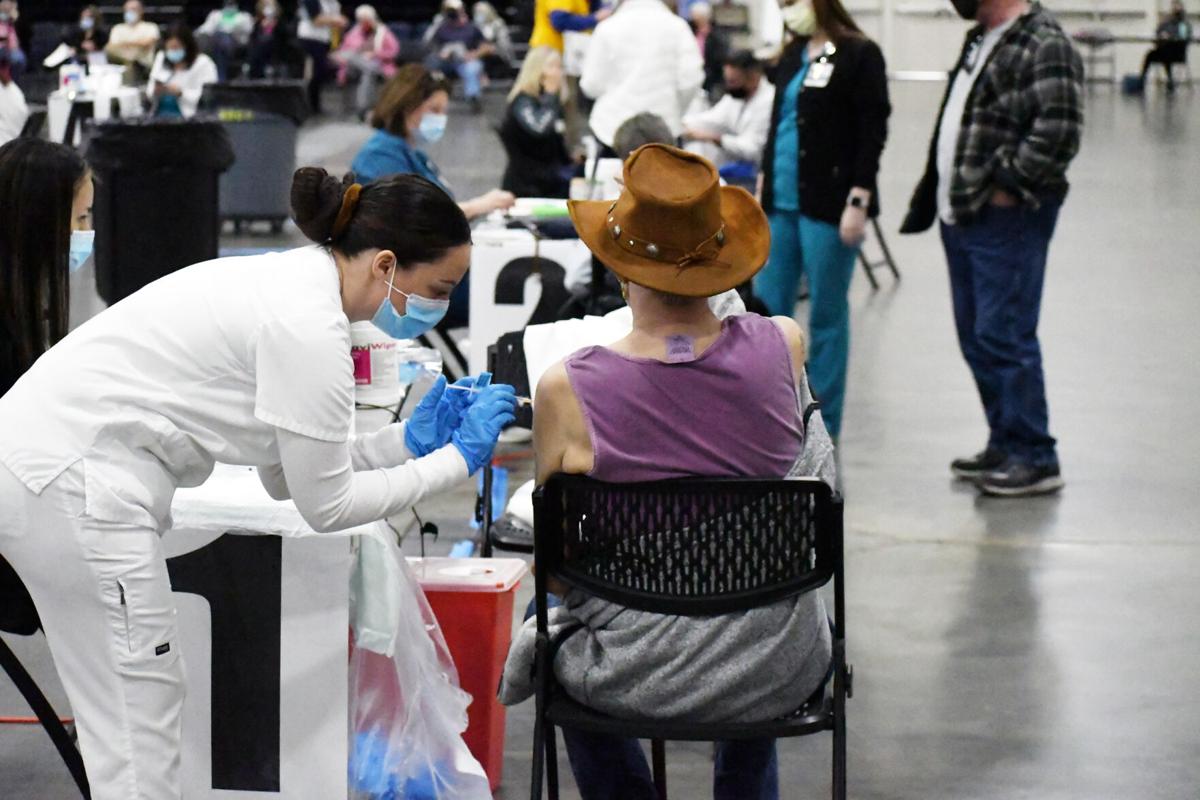 A patient receives the Moderna vaccine during an event hosted by McLeod Health and the city of Myrtle Beach on March 2, 2021. Nick Masuda/Staff 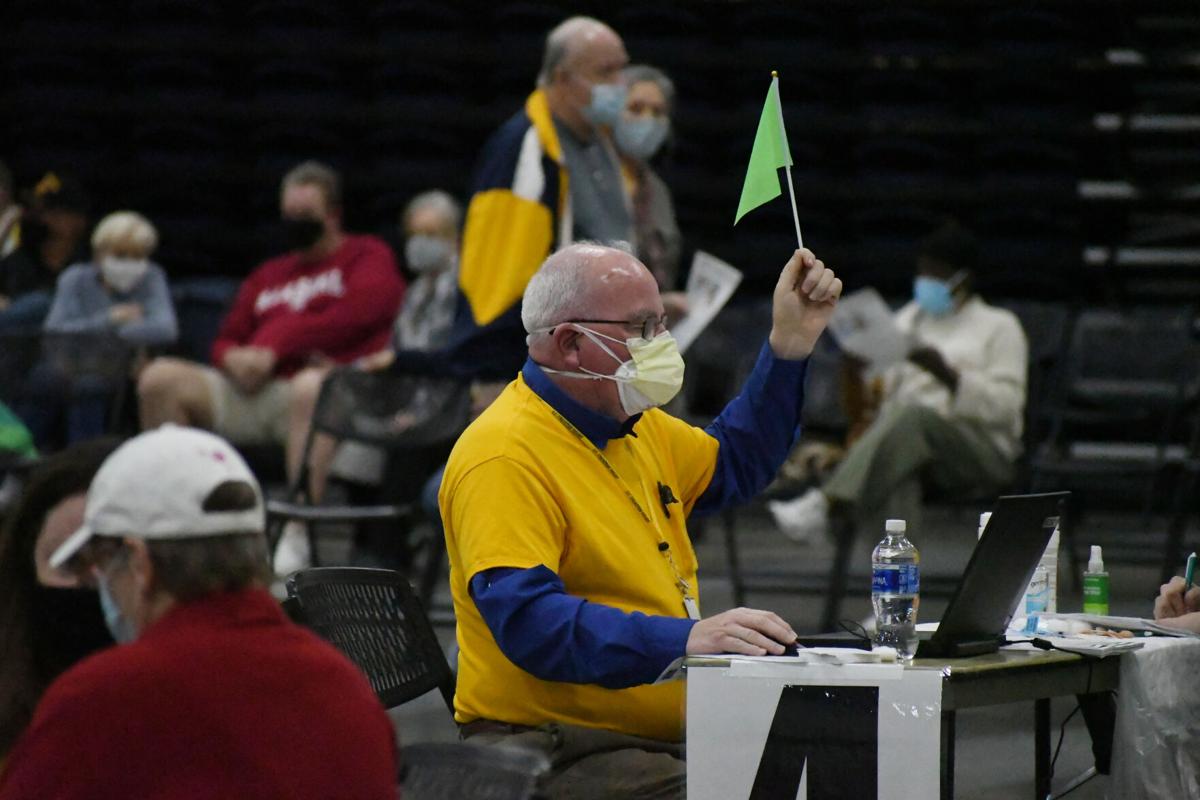 A worker indicates that his vaccination station is available for a patient to get the Moderna vaccine during an event hosted by McLeod Health and the city of Myrtle Beach on March 2, 2021. Nick Masuda/Staff 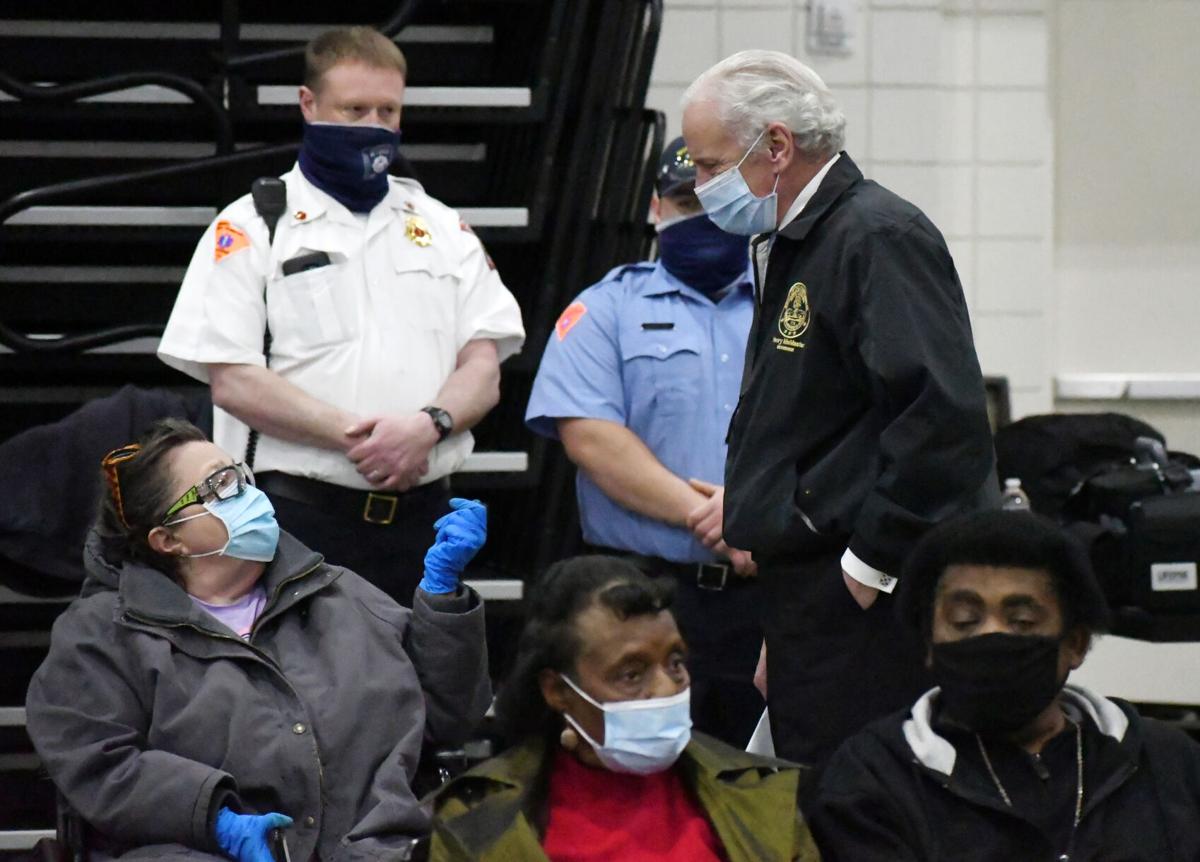 A patient is greeted by Gov. Henry McMaster while waiting 15 minutes after receiving the Moderna vaccine during an event hosted by McLeod Health and the city of Myrtle Beach on March 2, 2021. Nick Masuda/Staff 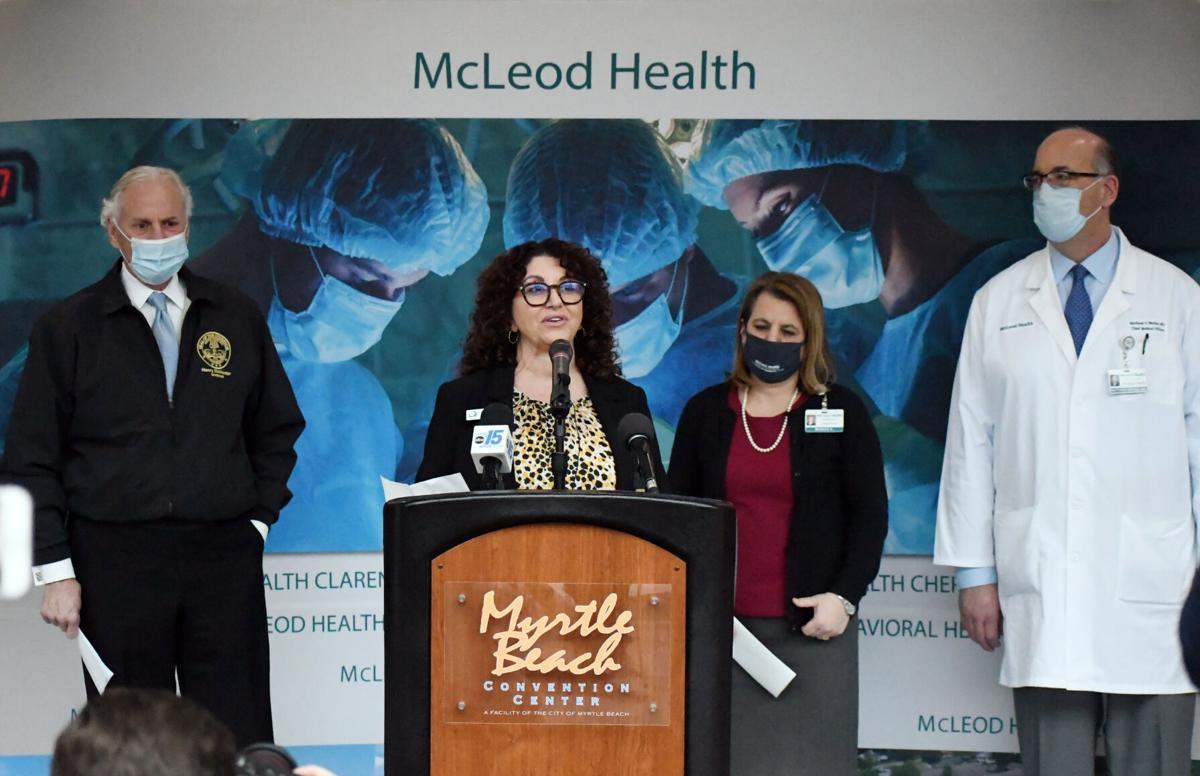 Brenda Bethune, mayor of Myrtle Beach, speaks to the media during a COVID-19 vaccination event by McLeod Health and the city of Myrtle Beach on March 2, 2021. Nick Masuda/Staff 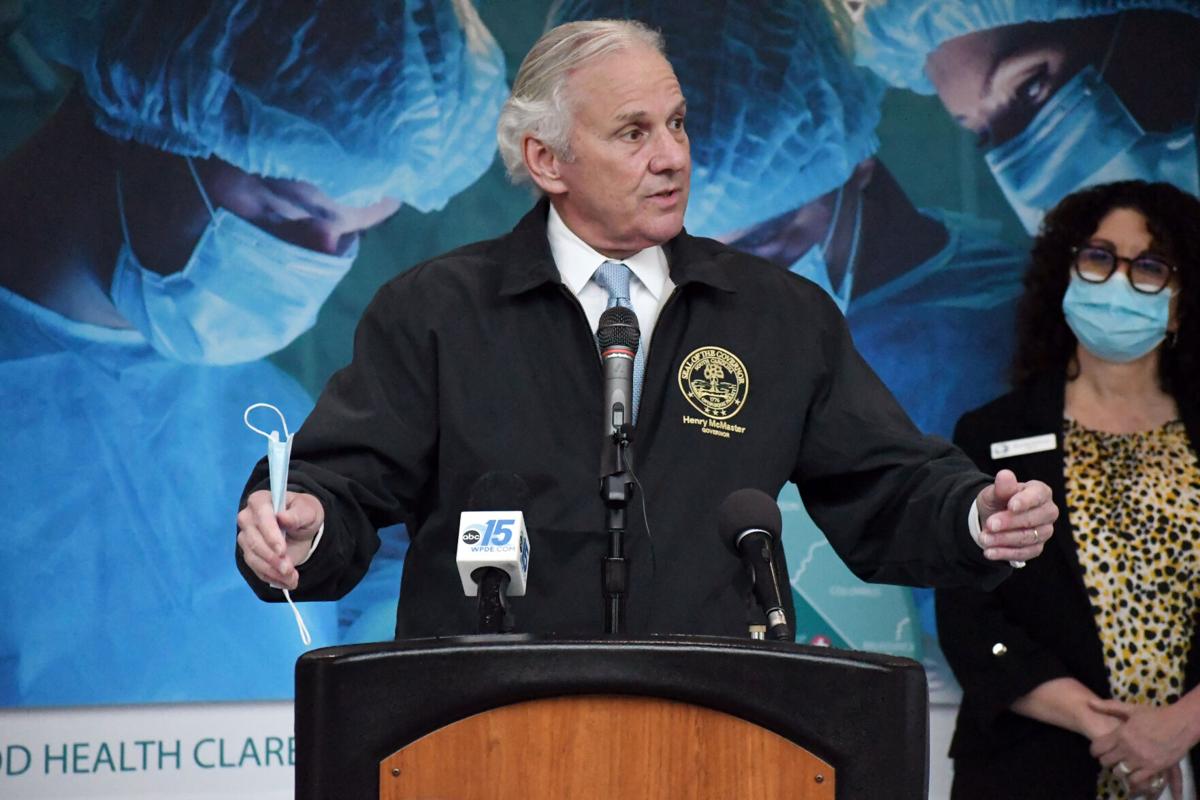 Gov. Henry McMaster addresses the media during a mass COVID-19 vaccination event hosted by McLeod Health and the city of Myrtle Beach on March 2, 2021, at the Myrtle Beach Convention Center. Nick Masuda/Staff

MYRTLE BEACH — As Gov. Henry McMaster attentively toured the temporary COVID-19 vaccination clinic at the Myrtle Beach Convention Center on March 2, some patients didn’t pay him any attention — their ray of hope was just moments away from being stuck in their arm.

In just 48 hours, McLeod Health will be responsible for changing the perspective of 5,000 people — utilizing a shipment of the Moderna vaccine that was carefully and precisely doled out by nurses in a corner room of the convention center.

Matthew Weeks, chief medical offer with McLeod Health, was excited about the vaccinations, but even more so by the well-oiled experience that people were having.

“This has been so smooth, it’s running like clockwork,” said Weeks, who indicated that McLeod had already vaccinated more than 45,000 individuals. “For us, it wasn’t just about the vaccine, it was about making sure people felt comfortable and taken care of.

The first of a two-day clinic came amid news from McMaster that Phase 1B would be kickstarted on March 8 — just as a trio of medical outlets was attempting to catch up to the overwhelming demand from Phase 1A that featured those 65 and older, as well as health professionals.

And while Brian Argo, chief financial officer at Conway Medical Center, is ecstatic to see more than 2.7 million people get their chance to get in line, it comes with great trepidation.

Argo is desperate for more vaccine since the facility  consistently is not getting what it requests from the S.C. Department of Health and Environmental Control, including this week when it received 1,170 first doses and 1,170 second doses — representing half of what it asked for.

Despite the consistent setbacks in February, Argo said CMC is refusing to throw in the towel and instead is becoming more aggressive — to the tune of an 11,000-dose request.

The bold move comes amid CMC’s partnership with Horry County Schools, with Argo indicating that teacher vaccinations could start as soon as March 12 if the request is granted, which would include roughly 4,000 doses earmarked for HCS.

The district announced at its last Board of Education meeting that vaccinations would occur by teacher last name.

CMC is also asking for 1,000 doses to inoculate faculty at Coastal Carolina University.

The medical center has added 20 schedulers and 40 vaccinators in preparation for an increased allotment of the vaccine — all at its own cost.

“We just thought it was the right thing to do for our community was to go ahead and get as many people hired as we could to be ready to vaccinate them,” Argo said, explaining that CMC still has 11,000 appointments on the books for the next several weeks.

“We just wish we had more vaccine. We will take Pfizer, Moderna, Johnson & Johnson — we’ll take anything.”

A day after announcing that it received a record-breaking allotment of the vaccine, Tidelands Health is feeling fortunate that it might be close to exhausting its original Phase 1A list due to the 6,000 doses it received this week.

Like McLeod, Tidelands is utilizing a one-time allocation of 2,500 Moderna doses to expedite the vaccination process, something that can’t be counted on again moving forward.

And with new appointment opportunities set to open up on March 8 for all three medical facilities, Gayle Resetar, Tidelands' chief operating officer, says it is critical that the predictability of supply is resolved.

“I really can't predict that I'm going to get more than 1,100 doses each week, so I can’t open the schedule going on into March and April with just 1,100 a week — but I really hope I get more than that,” Resetar said. “And I don't know until Friday night what I'm going to have for the next week. All the appointments open up at the last minute.”

The event at the convention center on March 2 was co-sanctioned by the city of Myrtle Beach, with Mayor Brenda Bethune at McMaster’s side during a 10-minute tour of the facility that saw the governor fist- bump a trio of patients who were in the 15-minute observation zone.

Bethune has been aggressive in protecting Myrtle Beach — the city extended its mask ordinance through March 31 on Monday — and was complimentary of the governor’s efforts, indicating  she believes McMaster cares about the South Carolina coast.

“He has allowed us to stay open and keep our economy going, but he has done so responsibly and safely. He understands the value of the coast. He listens to our needs, he responds quickly,” Bethune said. “He always has time to answer our questions or listen to our input.”

This came as Myrtle Beach was named as one of a handful of South Carolina’s metro areas that top a national list from The New York Times that evaluates how many new cases are being reported to health officials over the past two weeks.

McMaster indicated that more help was on the way in the form of the Johnson & Johnson vaccine arriving in the state by Friday, with the first doses set to take place shortly thereafter at pharmacies throughout the state.

He also said that he didn’t expect all of the 2.7 million eligible people to get the vaccine, which will aid in expediting the state’s path to Phase 1C.

With federal supply seemingly growing by the week, McMaster felt it was the right time to open up the opportunity to a wider range of people — even giving McLeod Health a special exemption to extend another mass vaccination clinic at Darlington Raceway on March 5 to those in Phase 1B.

“We are confident the amount coming in is going to do nothing but increase,” McMaster said.

While Resetar agrees that supply will indeed increase, the patience that it will take from the general public will be a distinct obstacle — even if she has seen regional offices for DHEC grow to understand a bit better what it takes to protect the community.

“I think they probably understand a lot better now than they did in the very beginning,” Resetar said.

“I think they have a much greater appreciation for what kind of village it takes to pull this off.”