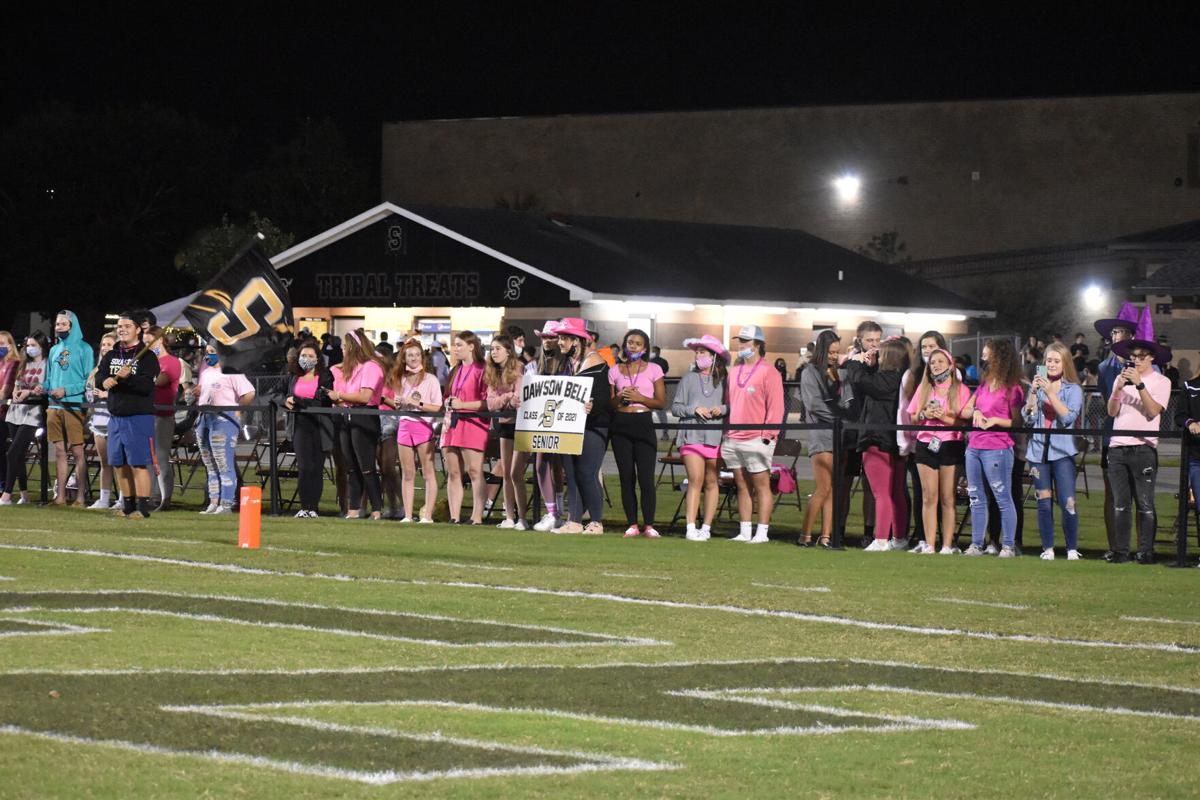 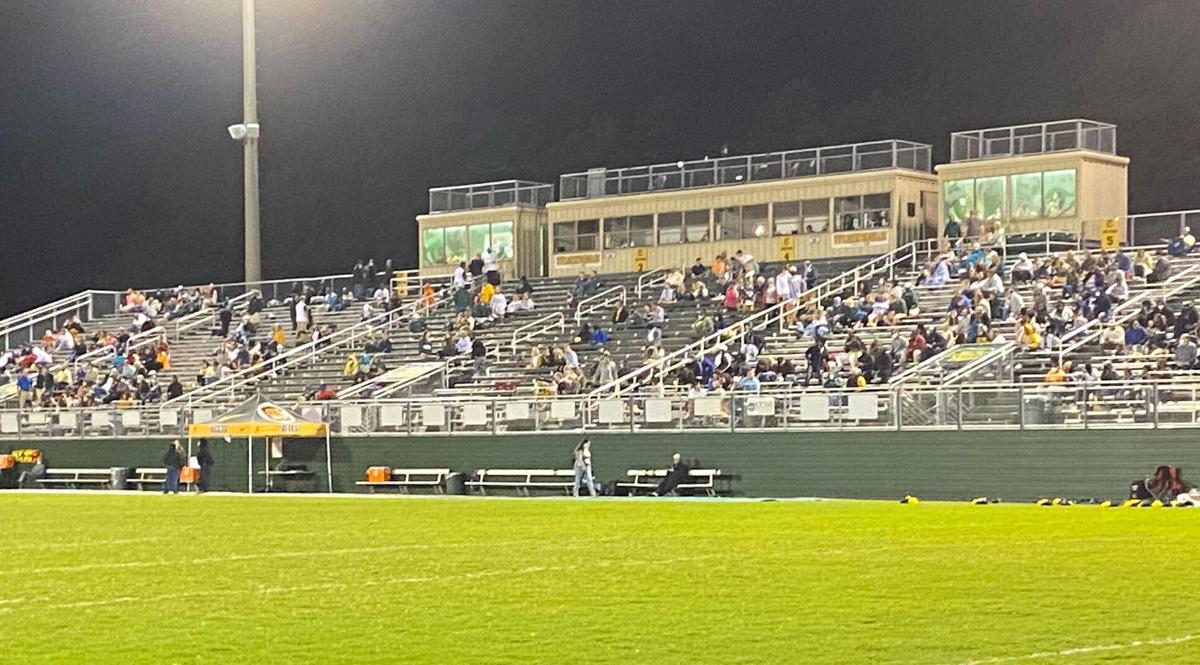 The home side for the West Florence vs. Conway high school football game on Oct. 16, 2020. 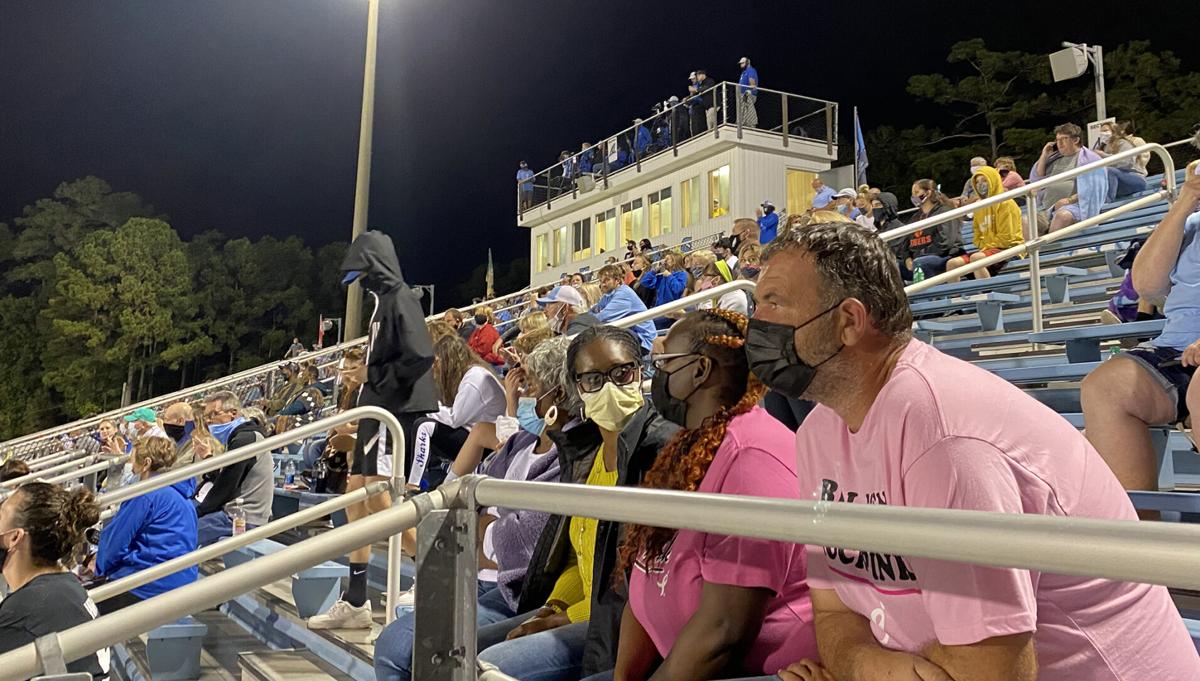 St. James fans during a high school football game on Oct. 16, 2020 against Sumter. 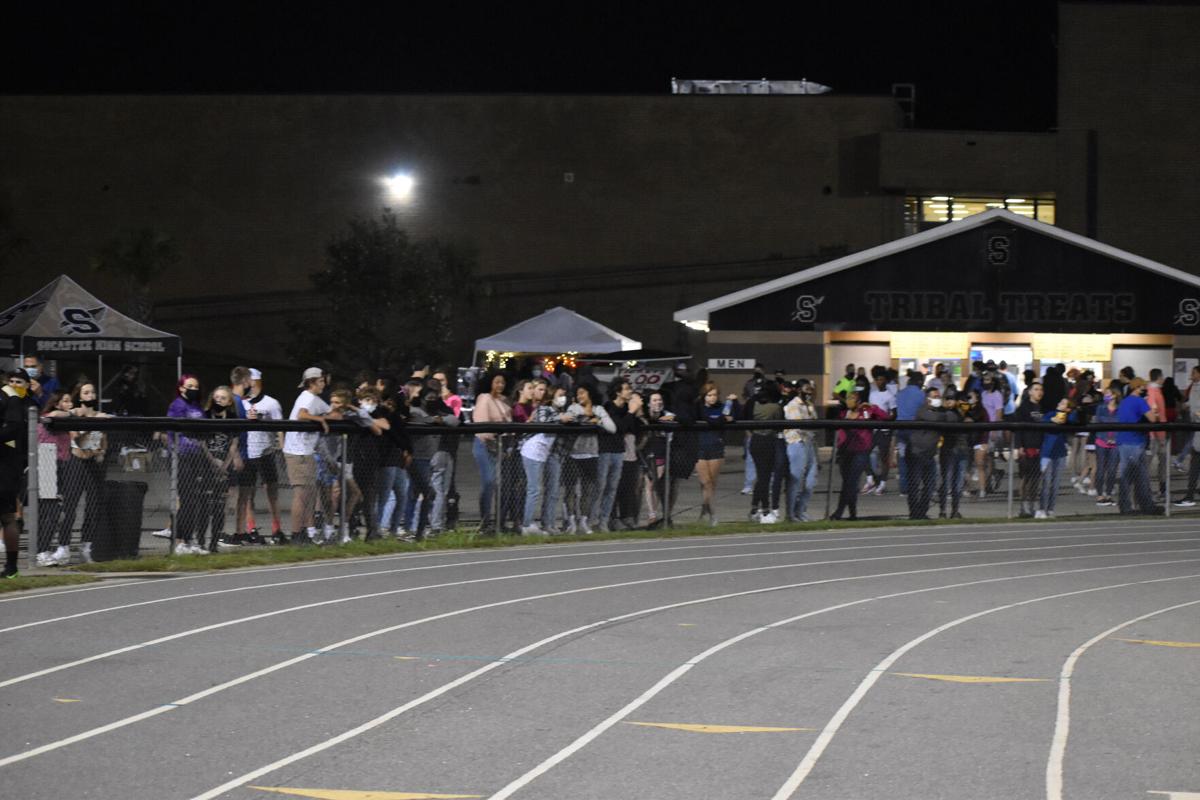 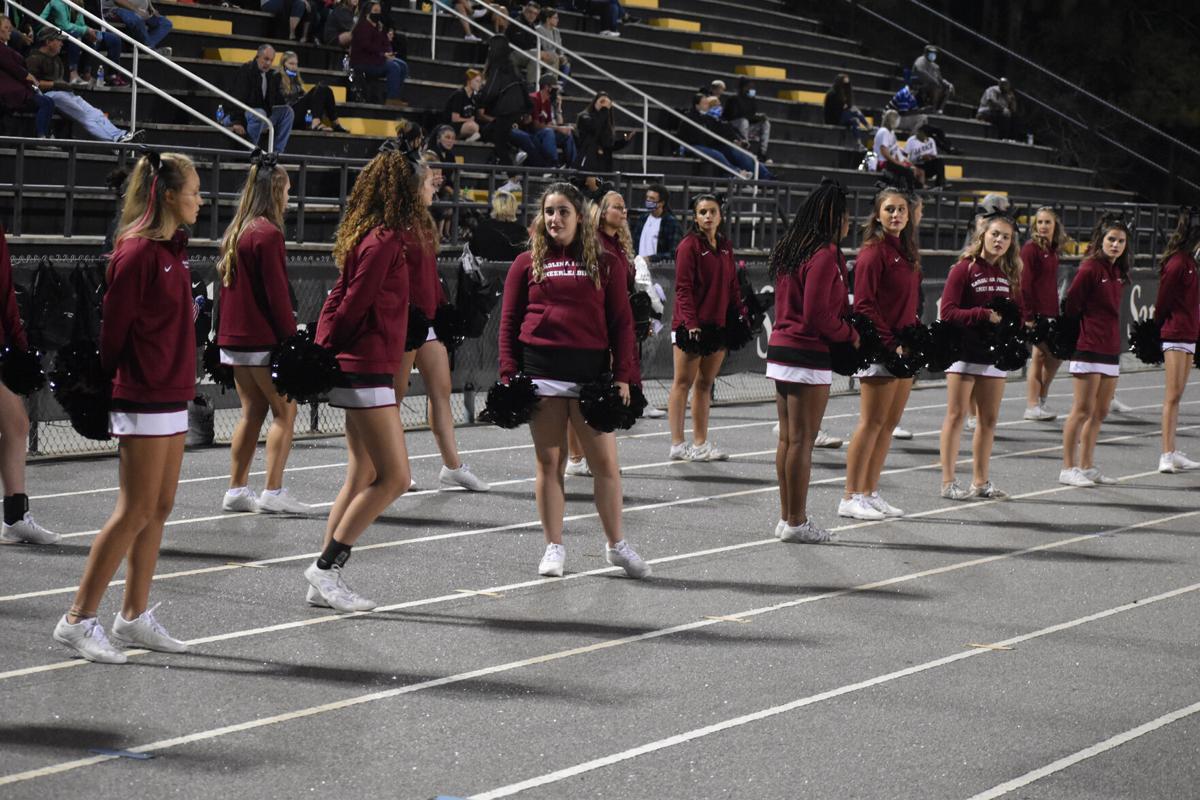 The Carolina Forest cheerleaders during a high school football game at Socastee on Oct. 16, 2020. 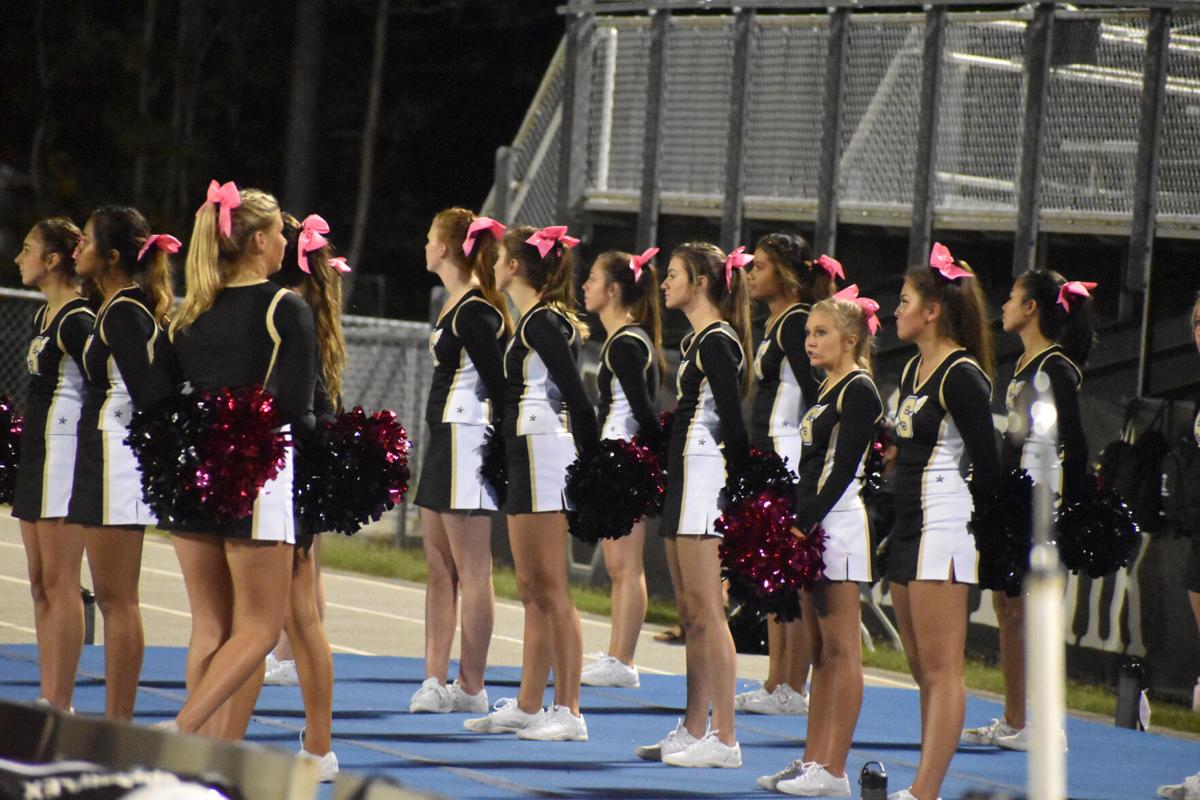 The Socastee cheerleaders during a high school football game at Socastee on Oct. 16, 2020. 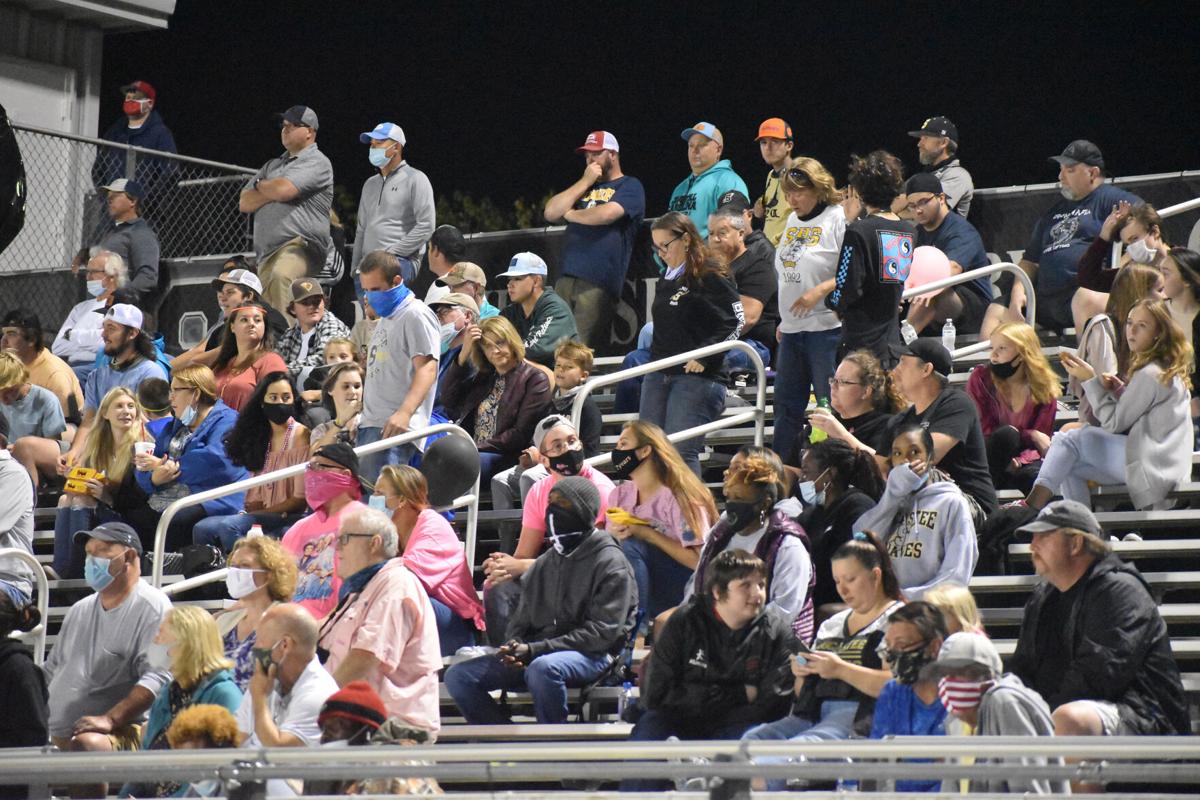 Fans at the Carolina Forest vs. Socastee high school football game at Socastee on Oct. 16, 2020.

The Carolina Forest cheerleaders during a high school football game at Socastee on Oct. 16, 2020.

The Socastee cheerleaders during a high school football game at Socastee on Oct. 16, 2020.

Fans at the Carolina Forest vs. Socastee high school football game at Socastee on Oct. 16, 2020.

They say that a picture is worth a thousand words.

Both can have endless consequences.

A homecoming and an overzealous social media account provided cause for concern as the Post and Courier Myrtle Beach continues its Friday Night Lights Unmasked series, overshadowing a pair of schools that seemingly did it right (although one is feeling the fallout of a road JV football game and subsequent quarantine for both teams).

In Socastee, there were throngs of students and adults alike glued to the chainlink fence surrounding the football field, congregating in common places is something that both the South Carolina High School League and the South Carolina Department of Health and Environmental Control have advised against.

Meanwhile, moments after a thorough victory, the North Myrtle Beach Chiefs, a sports fan page followed by thousands, posted this on both Facebook and Twitter:

“Well, that was fun!! #5 NMB Chiefs defeated Darlington 63-14 to improve to 4-0. West Florence at HOME next Friday. #PackTheHank (as much as covid allows anyway)”

Excited to be undefeated? Sure. Pumped for the kids? Absolutely. #PackTheHank? There are rules against that. With cases on a two-week rise in Horry County, and a super spreader event in North Myrtle Beach that has killed two people to date, the timing of pushing boundaries might not be ideal.

Here are a trio of reports from across Horry County for Week 4 of the high school football season:

SOCASTEE — With roughly 1,200 people in attendance, many fans were not wearing masks properly, while little social distancing was occurring in the stands.

The Socastee High choir performed before the game and pulled their masks down. The band also removed its masks while playing.

Cheerleaders and dancers were not wearing masks on both sidelines — repeat behavior for both squads, with Carolina Forest being observed doing this during Week 2 and Socastee in Week 3.

Coaches also pulled their masks down during the game.

There were signs posted throughout the stadium to wear a mask and socially distance, and the PA announcer constantly reminded spectators to do so.

The reminders seemingly didn’t work, as people also gathered along the fences to watch the game and were not socially distanced — many also not wearing masks.

Some people at the concession stands were not wearing masks and were not socially distanced.

Both sets of stands had fans not socially distanced, although the Socastee side was more glaring.

An estimated 40 percent of spectators were not wearing masks.

Masks were worn by just about every fan in the stands — which were marked clearly on where people could sit and where they couldn’t. As parents of students lined up along the running track as part of a halftime show, there was a school staff member to ensure they were following 6-foot social distancing regulations.

The only questionable moves observed involved the cheerleaders.

Though they were separated during regular cheers, a couple formations involved three and four cheerleaders close to each other without wearing masks.

The varsity cheerleading team recently went into quarantine due COVID-19 exposure, according to the school district.

CONWAY — A group of boys stopped by to check-in with their parents sitting in the stands of Conway High School -- or more likely to get another bite of Bojangles before returning to playing together around the stadium.

Once the group of boys were ready to go back to playing around the stadium while their parents watched the game, one boy said something that just a year ago would've seemed like something a kid would never need to worry about.

He reminded his group to not forget their mask. His friends quickly complied.

Football games are inherently social events, especially for the youth of Conway. And despite a pending election and rising coronavirus case numbers, the game sounded normal as cheers and drums filled the air.

But the familiar sounds don't mask how unusual this familiar American tradition looks in 2020.

For another week, Conway Tiger fans seemed to mostly understand the 2020 season isn't going to be like it was in 2019. While the sounds of a football game were a calming reminder of days before coronavirus upended American Life, visually the nearly sold out game against the West Florence Knights would've looked under attended compared to any previous season.

Most fans were wearing masks and sitting in isolated groups, making the game feel sparsely populated. Even six months into a pandemic, and in the middle of the annual fall football season, these changes to accommodate social distancing still look jarring to those who grew up with the normal sights of high school football.

But by the fourth week of high school football, Conway is getting the process down: Tickets must be purchased in advance, reminders to wear a mask were announced over the PA, stickers marking six feet distance still holding their color despite sitting in the sun when the stadium isn't in use.

A masked police officer walking around the stand reminded people not to bunch up and everyone seemed to comply. Public safety officers were around the stadium, all wearing masks.

"Working together is how we slow the spread of COVID-19," the announcer reminded the crowd ahead of the second half.

While a vast majority of people appeared to wear a mask, there were exceptions. The most common violation would be masks below the nose, or dipping it down quickly to react to a play or dropped catch.

Others, as is allowed under the rules, dropped their masks to eat or drink. And still, there were some walking around with no masks in sight. These folks seemed to be in a minority.

Even then, when reminded by a cop or a friend to mask up, most folks quickly complied.