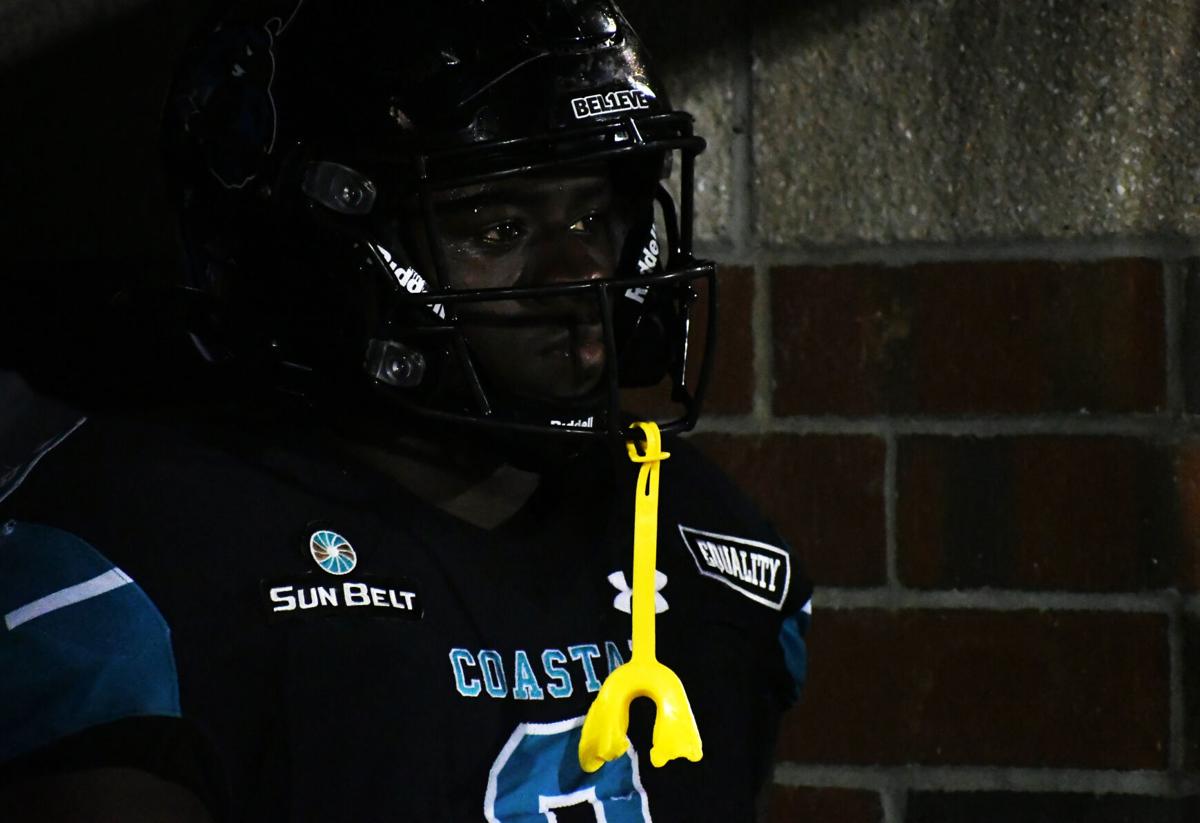 CCU's Tarron Jackson waits to take the field with his teammates prior to a game against South Alabama on Nov. 7. Nick Masuda/Staff 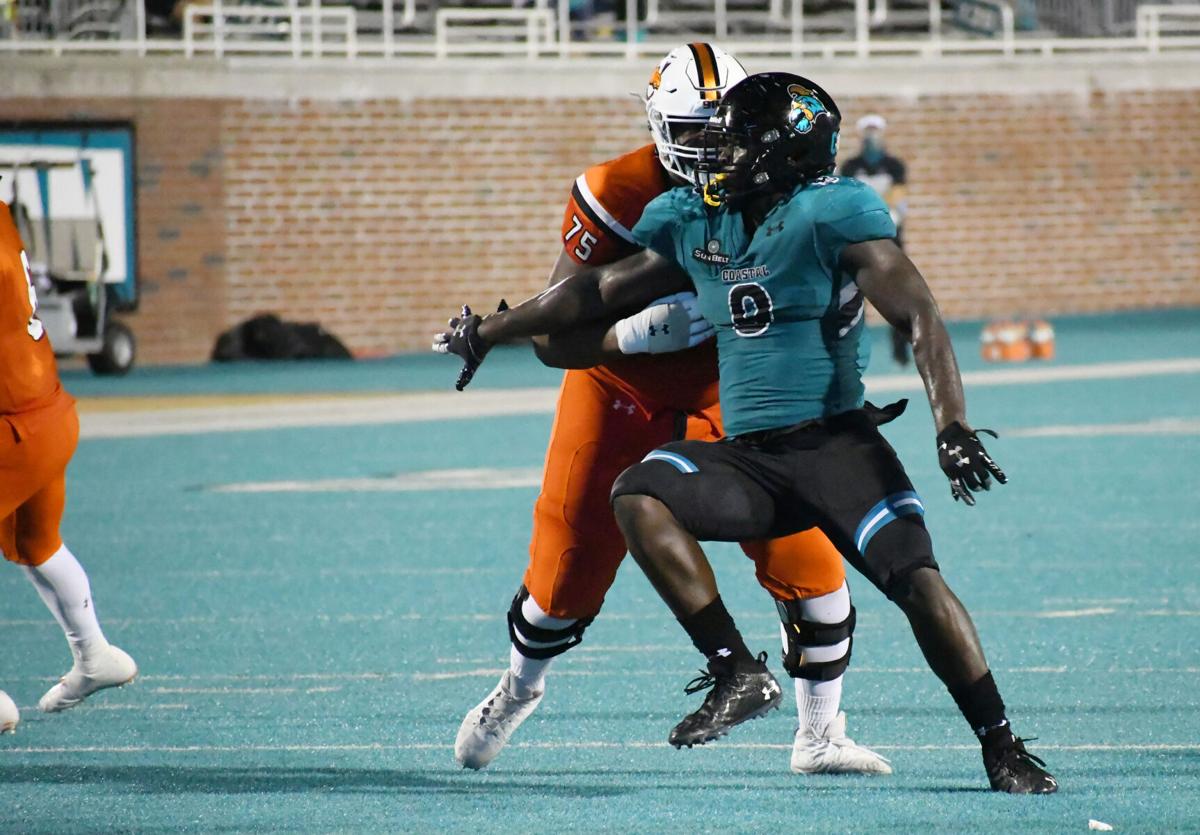 Coastal Carolina senior defensive end Tarron Jackson (9) tries to get around a Campbell defender back on Sept. 18. Nick Masuda/Staff 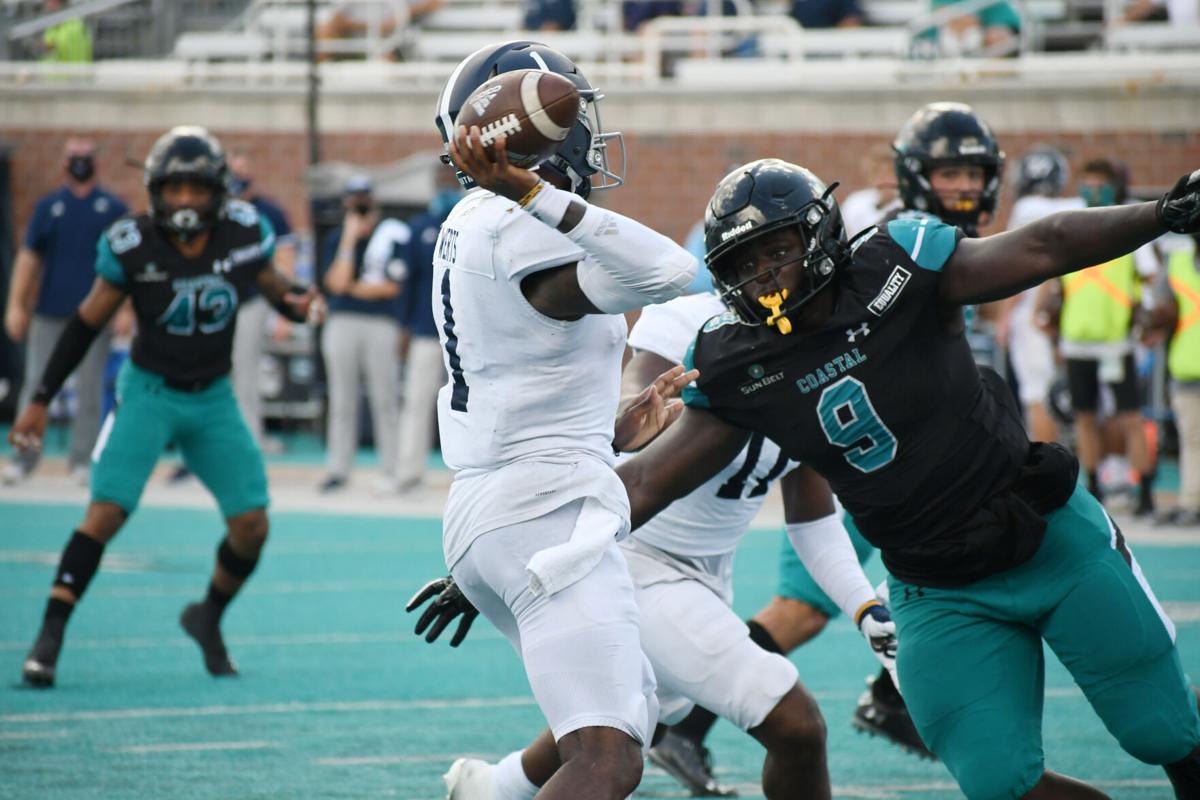 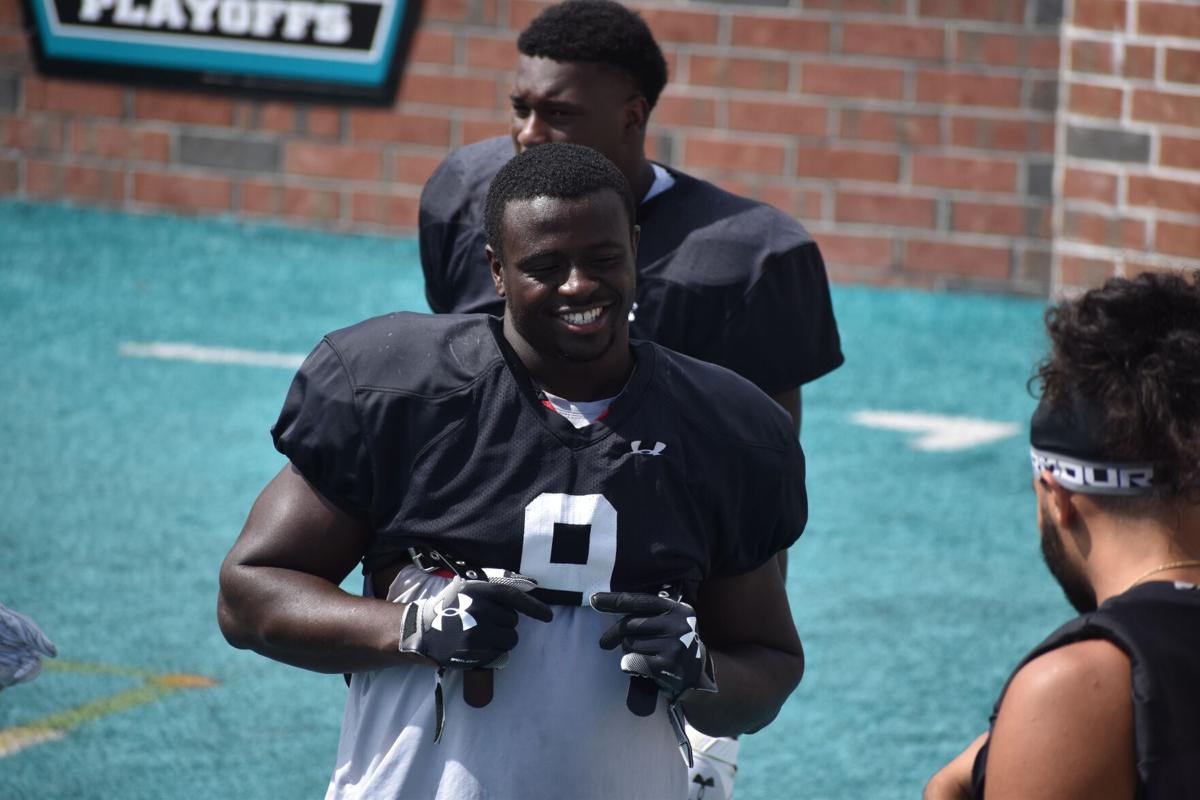 CCU's Tarron Jackson waits to take the field with his teammates prior to a game against South Alabama on Nov. 7. Nick Masuda/Staff

Coastal Carolina senior defensive end Tarron Jackson (9) tries to get around a Campbell defender back on Sept. 18. Nick Masuda/Staff

CONWAY — At the age of 10, Tarron Jackson decided to hang up his football cleats.

Having played for a couple of years, his interests lied more with shooting hoops and less about knocking around opposing quarterbacks.

But, sometimes, purpose arises when you least expect it — burning for reasons well beyond yourself.

He and his brother, Daron, enjoyed slinging around the pigskin, a bond forming over a sport that has put Tarron — one of the stars of a No. 11-ranked Coastal Carolina team that faces Liberty in the Cure Bowl on Saturday night — on the brink of a potential future in the NFL.

"I made a promise to my brother before he passed that I would make it to the NFL," Jackson said.

Those who have watched Jackson play this season have noticed his No. 9 jersey in the backfield of many an opponent. But that No. 9 jersey isn’t just some random number Jackson chose.

Jackson wears No. 9 because that's how old he was when his brother died.

“It means a lot to me,” Jackson said. “Football has always been, I feel like, kind of an outlet for me. Playing football and representing him and wearing that No. 9 is just an opportunity for me to kind of connect with him, in a sense. Because he loved football, that was kind of his first love.

“I loved basketball, but we always used to play football together, so when I started playing football again, that just kind of brought that connection back.”

“His brother is a great inspiration, because when we lost him, (Tarron) contributed his life and contributed football in honor of his brother,” Alphonso said. “It has inspired him to perform. When he gets down, he thinks about, ‘I’m contributing all I’m doing right now to my brother,’ because he really loved his brother.

“From the time he was a child, he said, ‘I’m going to dedicate this to my brother', and to this day, if you look in his phone, you’ll see his brother on his phone.”

"Just got that love for it again and just kept playing and now I’m here now,” Tarron said.

Tarron actually played middle linebacker until halfway through his junior year at Silver Bluff, when he started playing defensive end. He even played a little tight end at times.

“I think we saw his potential in his sophomore year,” former Silver Bluff head coach Al Lown said. “He was broad and rangy and tall; great work ethic. And so I told him his sophomore year he could be playing on Saturday and Sunday. When I was there, we had six guys go to the NFL, and I hope he’ll be the seventh.”

Tarron was part of Silver Bluff teams that were the runners-up in the 2A football state championship in both his sophomore and senior seasons.

“I’ve had a lot of great players come through when I was at Silver Bluff, but he’s one of the top 5 kids I’ve ever coached,” Lown said.

Coming out of high school, Coastal Carolina was Tarron’s only Division I offer. Jackson also had an offer from Division II Limestone, but the choice was simple for him.

“It was kind of an easy pick for me where I wanted to go,” he said. “When I came to Coastal, just the brotherhood and the atmosphere of Coastal and the academics just sold me — so I made my choice to come here ... I had some other Sun Belt schools looking at me, but Coastal was the only one to pull the trigger.”

Tarron already has a degree in Mathematics, having graduated in May.

After his junior season as a Chant, Tarron was named a 2019 All-Sun Belt first team selection, just the second first team pick in the school’s Sun Belt history. That season, he led the Sun Belt and set a CCU single-season record with 10.0 sacks, as well as a team record with 72 yards lost from his sacks. He also led the team and was fifth in the conference with 13 tackles-for-loss, was second on the team with 60 tackles and set a school record with 13 quarterback hurries.

Now, Tarron leads the 11-0 and Sun Belt co-champion Chanticleers in sacks with 8.5 (second in the Sun Belt) and has been nominated for just about every defensive award there is.

“(He’s) dominated every week, even when getting double-teamed,” CCU head coach Jamey Chadwell said. “He was consistently great every week, but even better off the field for us as far as leadership and maturity and helping our team stay focused all year.”

“He’s someone that pushes everyone to be better because of just how he works,” Gallagher said. “When the best player on your team is the guy who works hardest on your team, it kind of shapes your team’s whole work ethic, and that is who Tarron is. He’s a first one in, last one out kind of guy. Always working his butt off and always has a smile on his face; never complains.”

Much like Tarron coming out of high school, the Chants were overlooked at the beginning of this season, picked to finish dead last in the Sun Belt East Division by the conference in the preseason, a division they ended up winning for the first time since joining the conference four years ago.

"It definitely helps to keep an extra chip on your shoulder," Tarron said. "Whenever I'm working out our doing stuff with the team, we're competing. It's always in the back of our minds, but even though you have the naysayers, we kind of don't focus on all that outside negativity."

Instead, Tarron and his teammates have focused on what they can control.

"We just focus on what we're doing day in and day out," he said. "Just trying to grind and get better at something every day. At the end of the day, that's how successful teams are made."

Tarron has garnered every defensive accolade imaginable this season, including 2020 Bronko Nagurski Trophy finalist, Bednarik Award semifinalist, a 2021 Reese’s Senior Bowl invitee, a three-time Sun Belt Defensive Player of the Week and one-time Walter Camp FBS National Defensive Player of the Week recipient this year. He is also on the Ted Hendricks and Lott IMPACT award watch lists, and was most recently named one of 10 finalists for the 2020-21 Senior CLASS Award in collegiate football, an award that recognizes student-athletes that excel both and on off the field.

He is also a Walter V. Campbell Trophy semifinalist, having worked with numerous charities and events over his time at Coastal Carolina including volunteering at events such as Tim Tebow’s “Night to Shine” Prom, Caring for Kindergartners, Black History Month Program, pumpkin drives, and Christmas events, according to Coastal Carolina Athletics.

“It definitely means a lot, man,” Tarron said of being nominated for so many awards. “It’s a blessing to be in the conversation for a lot of guys going to the Reese’s Bowl and to receive a lot of the honors that some great players have had. But I kind of just try to do what I’ve been doing and just focus on that grind. That stuff comes with it from the results of a lot of that work, but like I said, definitely a blessing just to be in the conversation of a lot of those awards and honors.”

Daron would be proud of what Tarron and the Chanticleers have accomplished this season, and would be proud to know that his brother has a legitimate shot of being taken in the NFL Draft in April, especially given the fact that he was invited to play in the Reese’s Senior Bowl in January.

“I know he has the capability to be a great leader, even in the NFL,” Alphonso said. “He’s got the potential to do it and I know that he can do it. It’s a matter of him conditioning his body do it. But like I said before, he’ll always condition his mind. He’s always had a mind that if he can do it, he’s going to do it, and to this day he’s still doing that same thing.”