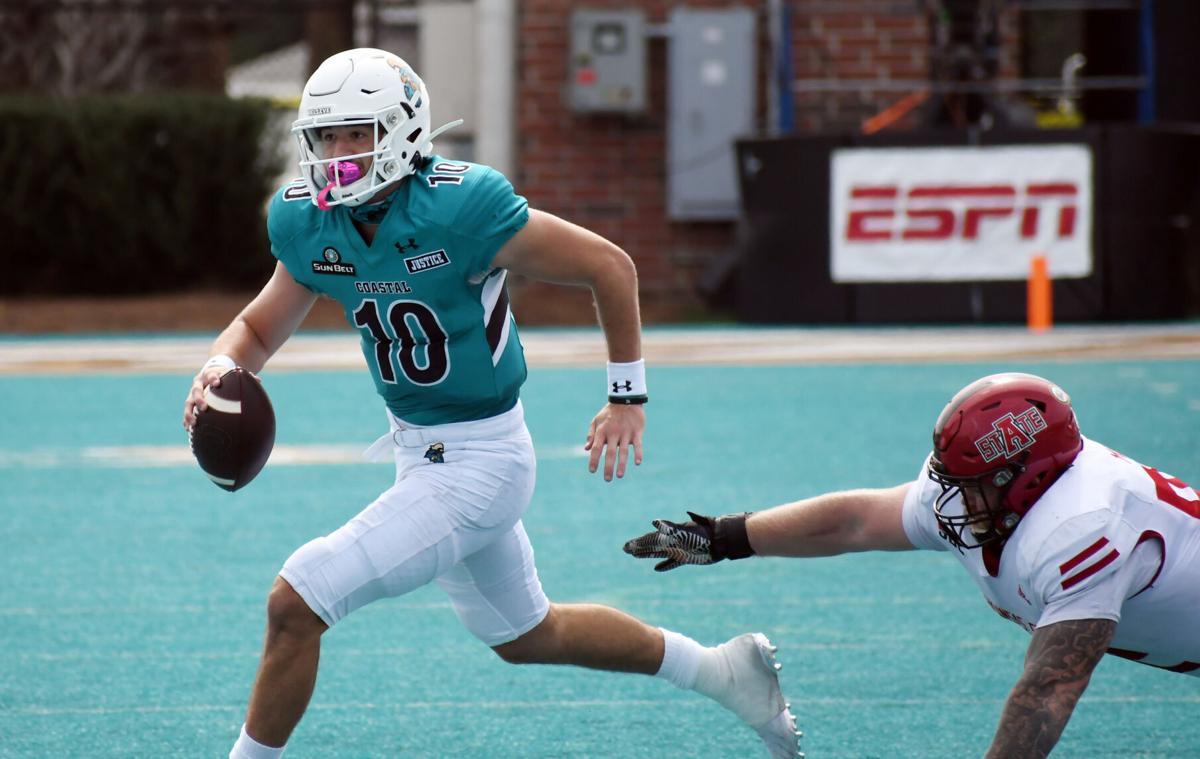 Coastal Carolina redshirt freshman quarterback Grayson McCall (10) was 20-of-29 for 322 yards with four touchdowns, while also running for 44 yards on 17 carries against Arkansas State. Nick Masuda/Staff 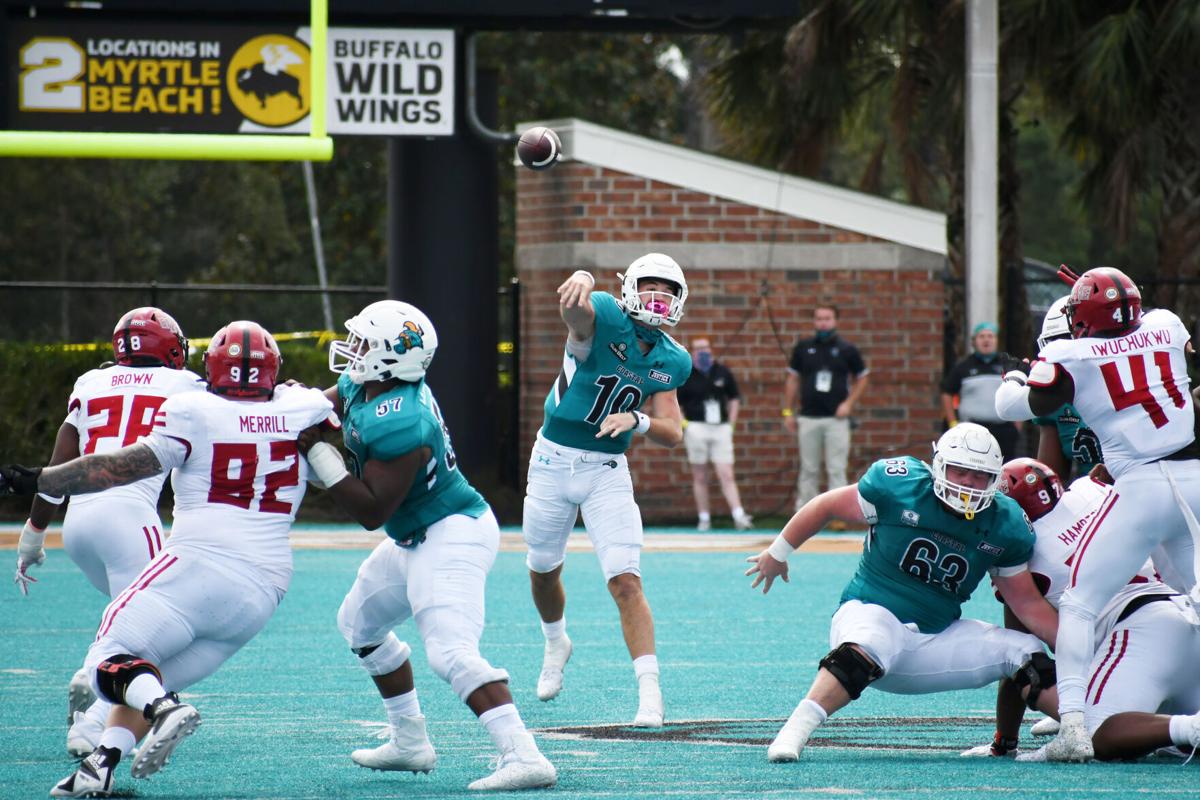 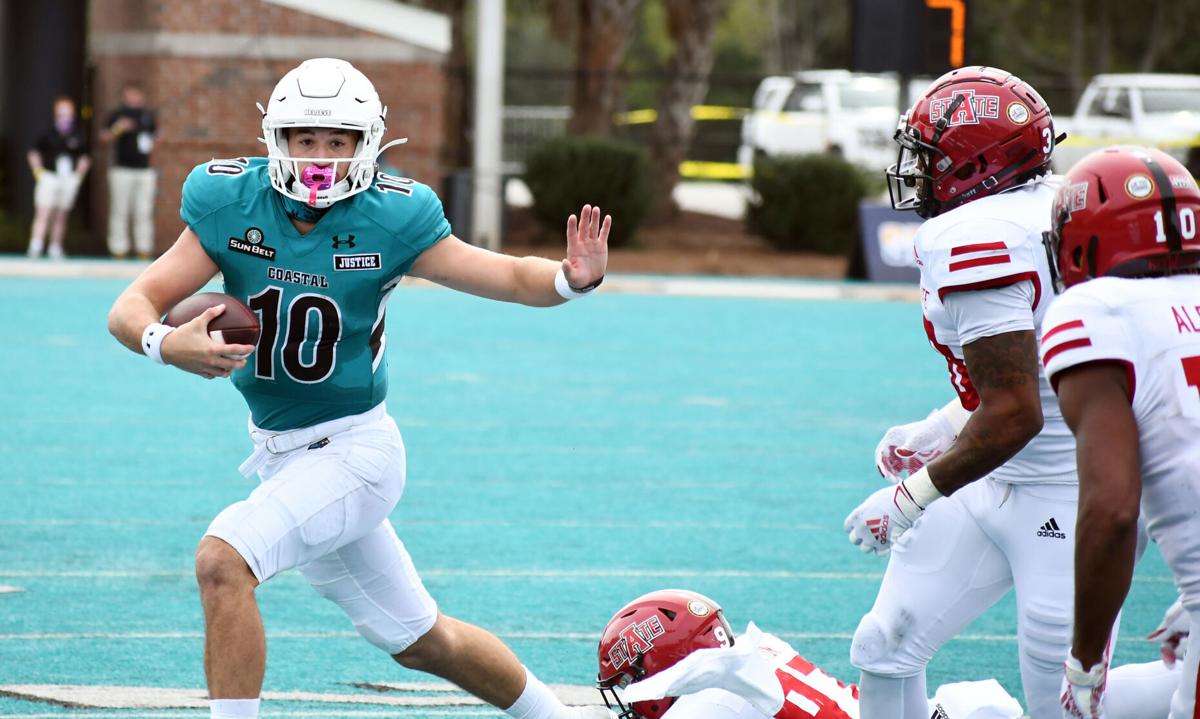 McCall has led the Chanticleers to their first 3-0 start since 2015, as well as their first since becoming a member of the Football Bowl Subdivision in 2017.

He has already garnered some prestigious accolades, being named a Manning Award “Star of the Week," earned a spot on the Davey O’Brien National Quarterback Award’s Great 8 list and received a College Football Performer Award (CFPA) National Performer of the Week honorable mention, all for his performance in the Chants’ 38-23 upset win at Kansas.

Through his first three games, McCall has completed 42-of-63 pass attempts, leaving him with a 66.7 percent completion percentage. He has averaged 243 passing yards per game and has thrown nine touchdown passes against one interception.

On the ground, he has averaged just over 10 carries per game for an average of just over 46 yards per game and ran for two touchdowns in the Chants’ win at Kansas on Sept. 12.

“Where he does a great job — he started out a little rough maybe there — he believes in himself,” Coastal Carolina head coach Jamey Chadwell said of McCall’s performance in the team’s 52-23 win over Arkansas State on Saturday.

“He stays in the pocket, he finds ways to maneuver and he has a great understanding of our offense.”

McCall took the starting quarterback job from juniors Bryce Carpenter and Fred Payton, who both alternated in the starting role while McCall sat out last season.

The Chants will travel to take on 3-0 Louisiana-Lafayette on Oct. 10, a game that will be broadcast on ESPN2 at noon just like the Chants’ game against Arkansas State on Saturday. The Chants were originally scheduled to play the Ragin’ Cajuns on Oct. 17, but the latter’s game against Appalachian State scheduled for Oct. 7 was postponed due to the Mountaineers having positive COVID-19 tests, so the Chants agreed to play Lafayette a week earlier.

Over his first three games, Ragin’ Cajuns senior quarterback Levi Lewis has completed 57.8% of his passes, 8.9% less than McCall. He has averaged 241 yards passing, two yards shy of McCall and has thrown four touchdown passes against three interceptions.

On the ground, Lewis averages just under five carries per game, five less than McCall, and averages a little over six yards rushing per game, 40 less per game than McCall.

So it’s safe to say when it comes to the stat sheet, the Chants have the edge over the Ragin’ Cajuns.

McCall isn't just making noise in Conway, as his stats are also among the best in the nation, including:

Now, how does McCall stack up against projected No. 1 overall NFL draft pick Trevor Lawrence of Clemson?

Lawrence has completed a little more than 73 percent of his passes in the Tigers’ 3-0 start, 6.5 percent higher than McCall. Lawrence has also averaged just under 283 passing yards per game, 40 more than McCall, and has thrown seven touchdown passes and only one interception.

One must keep in mind that when comparing their stats, Lawrence did not play in the second half of Clemson’s 49-0 blowout win over The Citadel.

McCall was unavailable for comment, as Chadwell does not allow freshmen players to speak with the media.